The PlayStation 5 is one of the hottest two consoles on the market, along with the Xbox Series X. And just like the Series X, it’s virtually impossible to get a hold of one right now. Between sky-high demand and a global semiconductor shortage, it will be months before the PS5 is readily available at retail. So unless you paid extra to buy from a scalper, you’re probably still waiting for your next-gen console. But that doesn’t mean it’s too early to stock up on accessories. And if you’re one of the lucky few who already owns the new PlayStation, it’s well past time!

We’ve already been hard at work reviewing various PS5 accessories. For instance, we recently looked for the best PS5 portable monitor. With a compact, portable monitor, you can take your new console on the road. But how about keeping your battlestation neat when you’re at home? Stacks of game discs are unattractive, but you want your favorites near your console. A quality game organizer can keep you tidy so your collection is fit for display. Not only that, but many organizers have brackets for controllers, headsets, and other accessories. Choose wisely, and you’ll no longer have to deal with an unsightly mess in your living room.

We’re about to review three of the best PS5 game organizers available on today’s market. We’ll begin by reviewing the ADZ PS5 Game Organizer. This is a simple, 12-game organizer that’s designed to take up as little space as possible. After that, we’ll move on to the ECHZOVE PS5 Storage Stand. This organizer only holds 10 discs, but has a storage drawer and brackets for controllers and headsets. We’ll finish up by looking at the Lomyuq Multifunctional Game Holder. This organizer is stackable, and sports a set of four controller mounting brackets. To find out which is the best, we’ll have to dig a little bit deeper. Let’s see what we uncover! 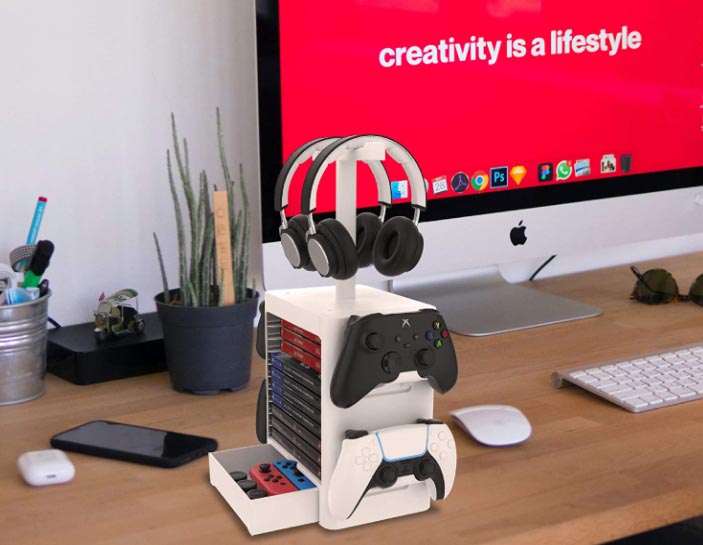 Physical vs. Digital Games — Which is Better?

Before we proceed, we should address the 800-pound gorilla in the room. In a world of digital games, is it worth buying physical discs anymore? As with many tech-related questions, much depends on what you need. Let’s take a look at a few different considerations.

To begin with, digital games have a major advantage in terms of availability. A digital download guarantees that your game will arrive on release day. Physical discs, meanwhile, can be delayed in the mail or simply out of stock at your local game stores. This is especially true for indie games and older games. You can always pick up Madden or Call of Duty at Walmart, but the same isn’t true for many titles. On the other hand, a digital marketplace is endless. You can download an obscure title just as easily as a popular one.

In terms of price, physical and digital games will usually be the same at launch. However, physical prices will often drop in price rapidly, while digital prices can remain high for months. If you’re willing to wait a mere week or two, you can oftentimes get a sweet discount on a physical copy. On the other hand, as time goes on, digital copies can get significantly cheaper. If you’re willing to wait for a holiday sale or a developer sale, you can get as much as 80 percent off. This does require some patience, though, as well as periodically checking your game marketplace.

That said, physical games have one major attribute that their digital counterparts don’t. They maintain resale value for years. This makes them far superior for games you only plan on playing once. You can buy them, play them, then sell them or trade them in for another game. With a digital copy, you can’t sell the game when you’re done. Whether you play it one time or a hundred, you pay the same price, and it has zero resale value. Furthermore, physical games can become collector’s items in their own right. This is particularly true for open-world games that come with maps, or very complex games that still include a manual. You don’t get those extras with a digital copy. A few years after release, an intact map or manual can seriously boost your resale value.

This goes along with another major advantage of physical games: you own your copy outright. If Bethesda decides to make their games exclusive to Xbox, they can pull them from the PlayStation Store. Even if you “own” one of these games, you won’t have any way of re-downloading them to your PlayStation. With a physical disc, you don’t have to worry about this limitation. Bethesda isn’t going to send someone to your house to take your game disc away.

One thing to point out is that most modern games come with significant day one flaws. Even if you have the game disc in the example above, you wouldn’t even have the Day One patch. This could effectively break many so-called “complete” games. That said, streamers and enthusiasts can use this to their advantage. If you disconnect your console from the internet, you can play the Day One version of a game. This means you can take advantage of bugs, quirks, and exploits that have been removed in later patches. Achievement hunters can often use this method to get achievements that would otherwise be very challenging.

Finally, there’s just something different about holding a physical game in your hands. It’s yours; you own it, and you can show it off. If that appeals to you, why not get an organizer to make your games easier to display and organize? 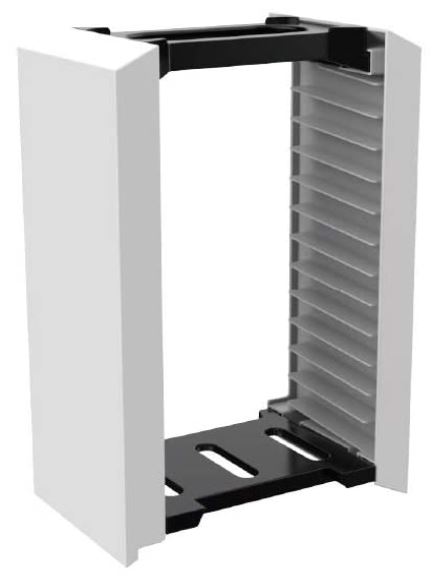 The ADZ PS5 Game Organizer is a 12-game storage rack, where your games slide in horizontally. It’s constructed from durable plastic, and has a two-tone design. The sides are white and the middle is black, matching the PS5’s color scheme. Needless to say, this is a fairly basic design, and it’s also suitable for other consoles. After all, disc cases are a standard size, so it works just as well for Xbox, PC, or even Blu-Ray discs. That said, the color scheme is most definitely PlayStation-specific. If you’re an Xbox or PC player, you’ll probably prefer a different aesthetic. 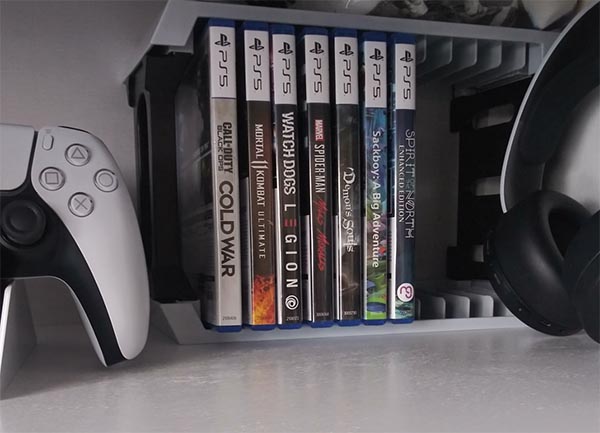 The design isn’t just attractive; it’s also well-engineered. It comes in four parts; the top, the bottom, and two sides. All four parts snap together easily, so assembly literally only takes seconds. Once it’s snapped together, the organizer is surprisingly strong. You wouldn’t want to stack an entire weight set on top. But you don’t have to worry about setting a few books on it. 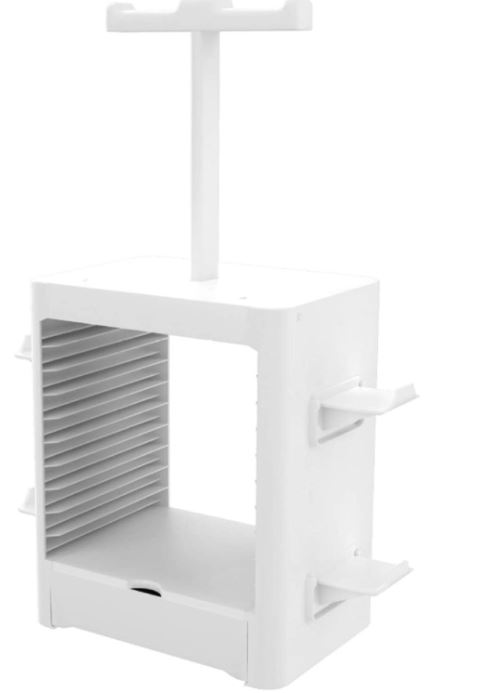 Like the ADZ, the ECHZOVE PS5 Storage Stand comes in PlayStation 5 colors. However, you have to choose between white and black, rather than getting a sandwiched look. It’s constructed from ABS plastic, and has a similar snap-together design. Instructions are included in the package, so there’s absolutely no room for confusion. The main body of the unit houses 10 game discs, stacked on top of each other. This gives it less game capacity than the ADZ organizer. However, it leaves room for other bonus features. 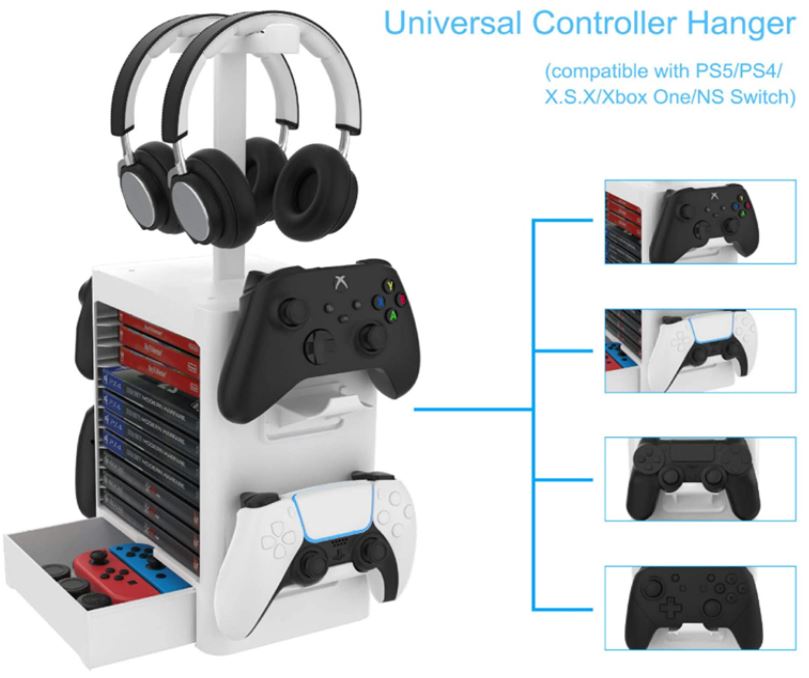 For one thing, there’s a small drawer underneath the game slots. It’s not huge, but it’s big enough to stow a Media Remote and other small accessories. In addition, there are two DualSense controller brackets stacked on each side. This gives you enough space to store up to four controllers. These brackets are universal, and can also be used for Xbox and Nintendo Pro Controllers.

Finally, a pair of headset brackets protrude from the top. There, you can hang your headsets, so all your accessories will be in the same place. That said, there’s a downside to having this much capacity. If the ECHZOVE stand is fully loaded, it takes up a fair bit of space! Prepare for it to become a fixture in your living room or man cave. 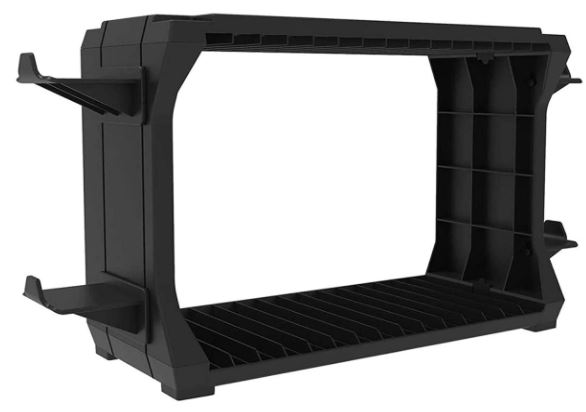 The Lomyuq Multifunctional Game Holder has an impressive, 15-game capacity. Unlike our other offerings, the games sit vertically, and are lined up in a row. The construction is of a similar plastic, with snap-together construction, but is only available in black. Each side boasts a pair of controller brackets, which are universal just like the ECHZOVE’s. The top is concave, and can be used for storing other small accessories or a Media Remote. 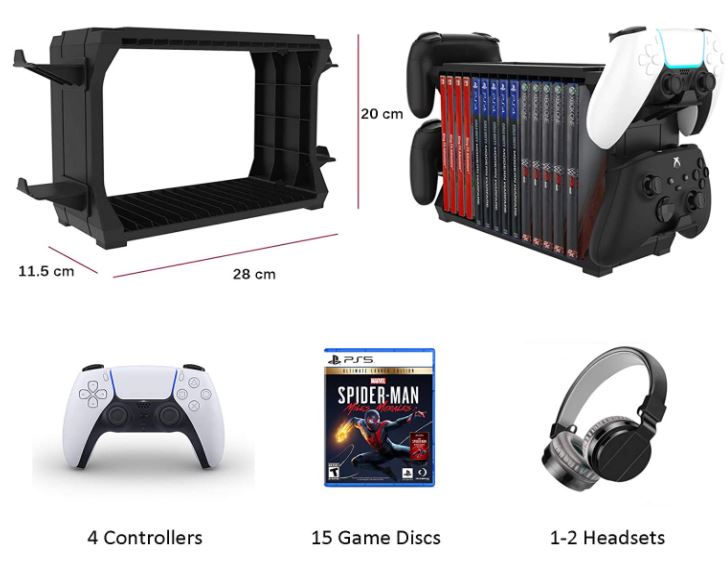 So, which PS5 game organizer is the best? If you’re just looking for a simple, barebones organizer, it’s tough to find fault with the ADZ PS5 Game Organizer. It’s compact, and it holds discs for 12 of your favorite games. It also has a slick PlayStation 5 aesthetic, with black in the middle and white on the sides. You can’t stow your controllers and other accessories. Then again, if you’re already using a DualSense controller charging station, you won’t need a controller bracket.

The ECHZOVE PS5 Storage Stand has more accessory storage than either of our other options. It has space for four controllers and two headsets, as well as an accessory drawer. If you have a lot of supplies that go along with your console, you’ll definitely prefer this option. That said, its large size might be a downside for some people.

The Lomyuq Multifunctional Game Holder is the best of the pack in terms of game capacity. This is true in two senses. First, it holds 15 games instead of 10 or 12. But beyond that, multiple organizers can be stacked on top of each-other. Effectively, you’re looking at enough storage for even a very large game library. Not only that, but the four universal controller hooks are enough even if you only have one organizer. All in all, this is a highly versatile game organizer