When it comes to innovation, few manufacturers are as eager to push the envelope as Nintendo. With the N64, they built the first rumble function and large, trigger-style controller. With the Wii, they created a motion control experience that captivated a generation of gamers. They even captured the imaginations of non-gamers from around the world. With the Switch, Nintendo took another bold leap forward. They designed it to be a hybrid between a handheld and traditional console. You set it next to your TV in docked mode, and it connects to your television. You undock it, and it works as a handheld console.

The Switch also accepts a variety of accessories. It connects to the dock via USB Type-C, but the Type-C port can be used for just about anything else. For instance, we’ve reviewed Nintendo Switch Bluetooth adapters in the past. These allow you to use Bluetooth controllers and other peripherals when you’re not in docked mode. There are other options, as well, such as Ethernet adapters. Basically, the Nintendo Switch can do just about anything in undocked mode that it can in docked mode. This means that the dock is, in many respects, becoming unnecessary.

Why Use an HDMI Adapter?

At this point, you might be asking yourself why the Switch would ever need an HDMI adapter. Doesn’t the dock take care of that? Yes, it does. But a dock is bulky, and can be a pain to move from place to place. If you’re trying to move your dock to another room or to a friend’s house, you may as well use a regular console. The whole point of the Switch is that you have the convenience of portability when it’s required.

That said, playing the Switch in handheld mode is an objectively less awesome experience. For one thing, the display is 720p instead of 1080p. This means you’ll be missing out on the best graphics. Not only that, but you won’t have the immersive experience of playing on a larger display. Now, consider a scenario where you’ll be staying in a hotel room for a week. The room has a sweet 55-inch LCD TV, but you’re stuck playing your Switch in handheld mode. As the kids say these days, “no bueno.” With an HDMI adapter, you can plug directly into the TV, just as if you were sitting at home. And because the adapter plugs into your Switch’s USB Type-C port, it negates the need for a dock.

There are other reasons you may want to use an HDMI adapter as well. Suppose you want to game in different rooms throughout your house. You could spend a small fortune on a handful of Switch consoles. Or, you could choose one TV as your primary, and use an HDMI adapter everywhere else. The experience is more or less the same, and you can move from room to room with ease. Not only that, but by using a single console, you don’t have to worry about saved games and updates. When you move to another room, you’ll have the same exact console and saves you were just using. This actually makes an hDMI adapter superior in some respects to owning additional Switch consoles. 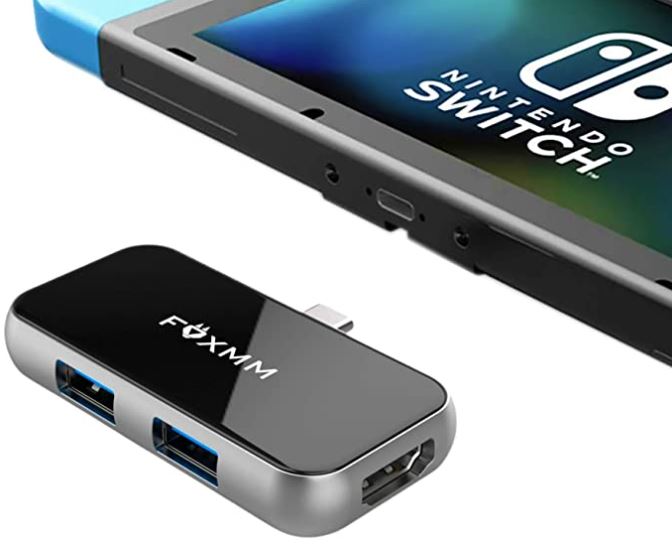 The FOXMM USB-C to HDMI Adapter is a compact unit that plugs directly into the bottom of your Switch. It’s sized to sit just up against the housing, so you can hold the Switch while you’re using it. This means you can leave the Joy-Cons attached, instead of using the JoyCon controller or Pro Controller. The downside is that there’s not much clearance. If you use a housing on your Switch, you may have trouble getting this adapter to plug in.

The FOXMM adapter’s housing is constructed from either zinc alloy or aluminum alloy. The aluminum alloy is lighter, but the zinc is more durable. And considering that this device is only slightly larger than a USB drive, the extra weight is negligible. That said, the aluminum has a bluer finish, so you may prefer it for cosmetic reasons. 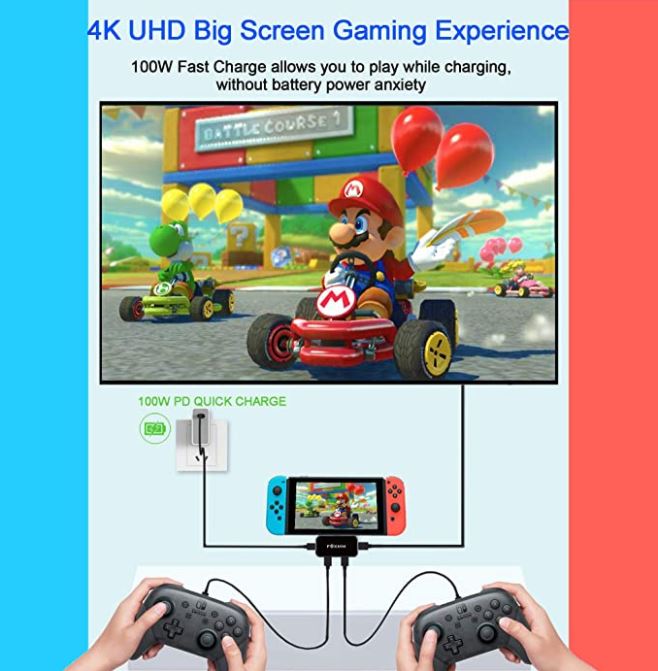 This adapter is designed to replicate some of the Switch dock’s connectivity. In addition to an HDMi port on the right, it sports a pair of USB Type-A ports at the bottom. One of these is a USB 3.0, and the other is a USB 2.0. They can be used for connecting other devices, such as a flash drive or external hard drive. Alternatively, you could even use them to plug in an external keyboard and mouse. But if you want to do that, you’ll probably want a purpose-built keyboard and mouse adapter for lower latency. 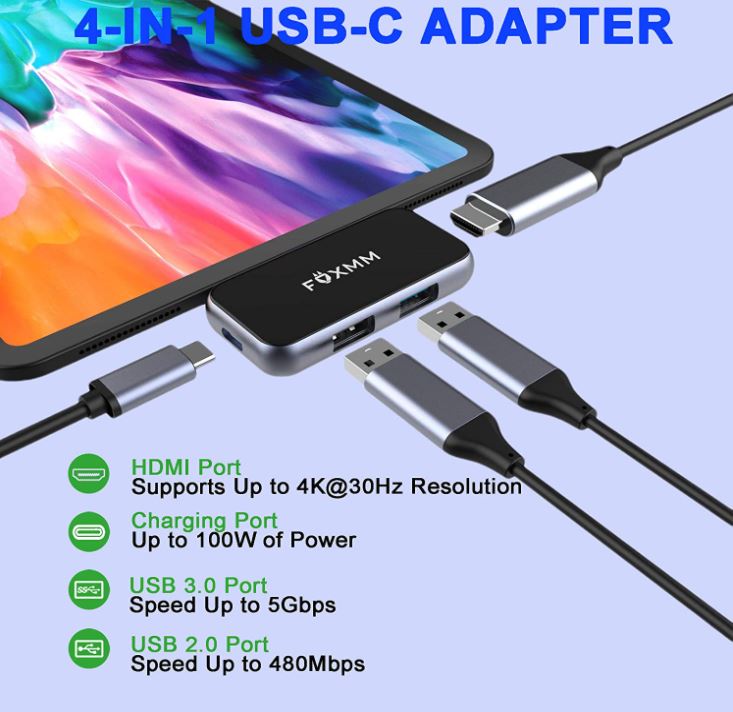 A USB Type-C PD port is located on the left side of the adapter, which can be used optionally for charging. There’s also an alternative variant where the USB 2.0 port is replaced by a 3.5mm aux port. This is a better choice if you do a lot of multiplayer gaming, since you’ll be able to use a third-party headset. All of this is protected by FOXMM’s 12-month manufacturer’s warranty and 24-hour customer service.

The FOXMM adapter’s HDMI port is capable of Ultra HD 4K output. However, this is irrelevant for the Nintendo Switch. The Switch’s maximum resolution is 1080p, so you won’t ever get a 4K picture. However, there are a couple of circumstances where this might prove useful. The first is if you’re concerned about signal degradation. This high-capacity port ensures that there’s plenty of bandwidth to spare. Second, you may want to use this adapter to connect something else, such as a tablet, to your TV. In this case, 4K resolutions may be possible, and it’s nice to have the capability. To this end, the adapter is compatible with Windows, Mac, Linux, and iOS. 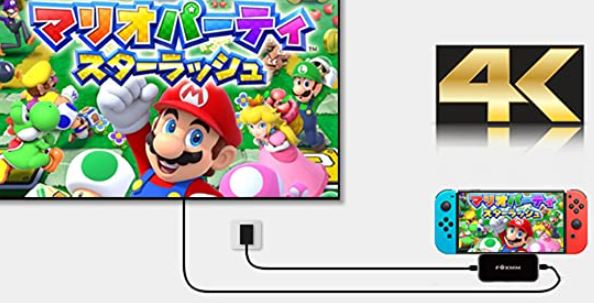 The Type-C charging port on the left side of the adapter is capable of PD charging. This is in line with the Switch’s dock, which uses a USB Type-C charger. The port will support as much as 100 watts of power, far more than the 18 required to play and charge the Switch. However, the extra power can be used to supply peripherals. If you’ve got a set of USB-powered speakers or an LED keyboard, you might need a few extra watts. Still, 100 is far more than you’ll ever need for any kind of reasonable setup. 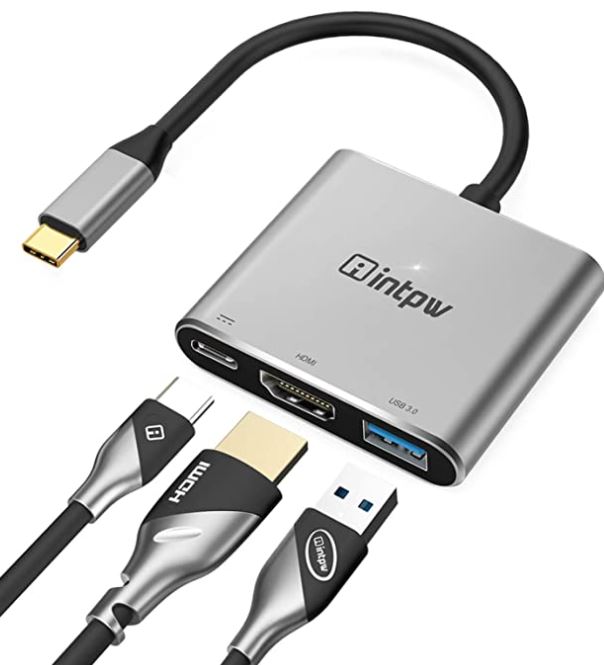 The INTPW USB-C to HDMI adapter is designed as a dongle, rather than as a clip-in unit. It’s a rectangular unit in a grey or silver housing, with a roughly four-inch USB Type-C cable on the back. When plugged into your Switch, it dangles free, keeping the other cords clear of your hands. 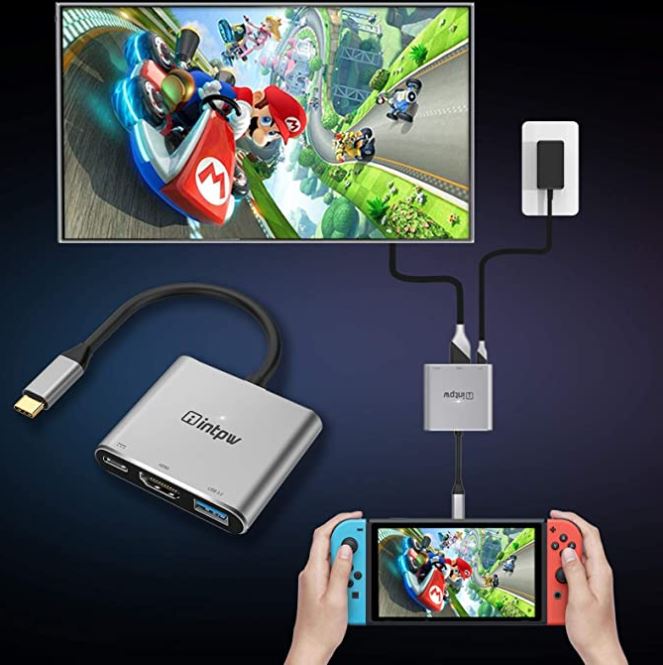 In the front of the case, you’ll see a row of three different ports. The leftmost is a USB Type-C, which is for providing power. The next is a HDMI port for connecting to your TV or monitor. Finally, there’s a USB Type-A port for connecting other devices. This doesn’t give you quite the same versatility as the FOXMM, since there’s only one USB port. Still, you can connect a thumb drive, streaming stick, or external keyboard without any trouble. That’s all you really need. 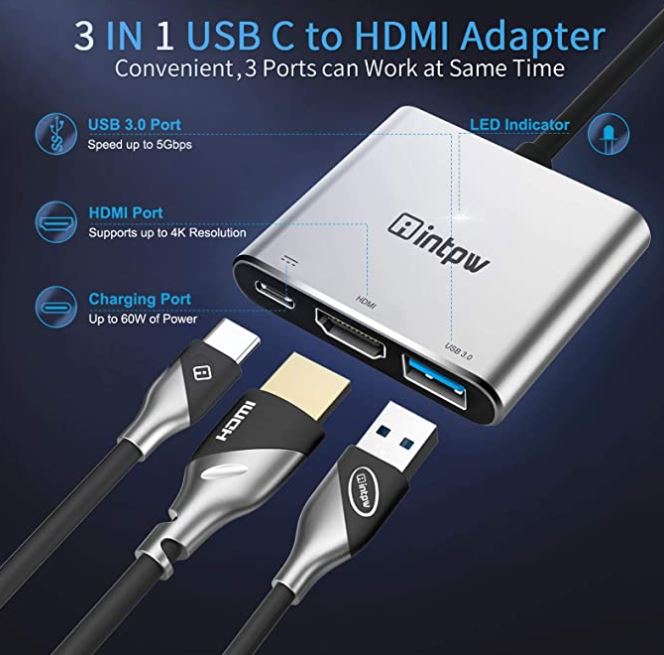 Like the FOXMM, the INTPW adapter is capable of far more than the Switch itself. It will support 1080p video at 60HZ, or a 4K signal at 30Hz. You won’t need this for a Switch. However, you can use it for computers, smartphones, tablets, and other devices. If a device has a USB Type-C video output, you can use this adapter to connect it to your TV. This includes the Samsung Galaxy, starting all the way back with the Galaxy S8. 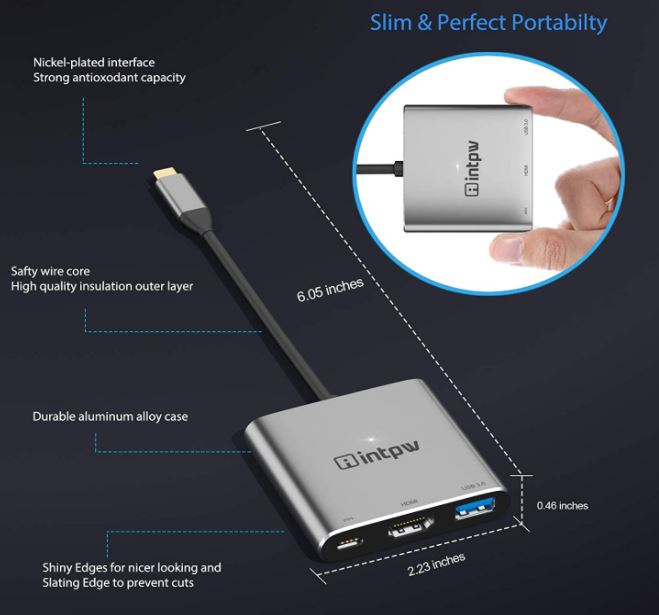 Unlike the other adapters we looked at, the INTPW requires power. It is not optional. It needs to receive a charge of at least 15 volts at 2.6 amps,or a total of 24 watts. This is enough to play and charge the Switch, as well as use the adapter. If you have a USB-powered accessory, you may need even more power. Thankfully, the INTPW adapter will accept an input charge of up to 100 watts. This requires a 100-watt PD charger, which is not included in the package. But even a relatively low-powered 24-watt adapter will be good enough to do the job. 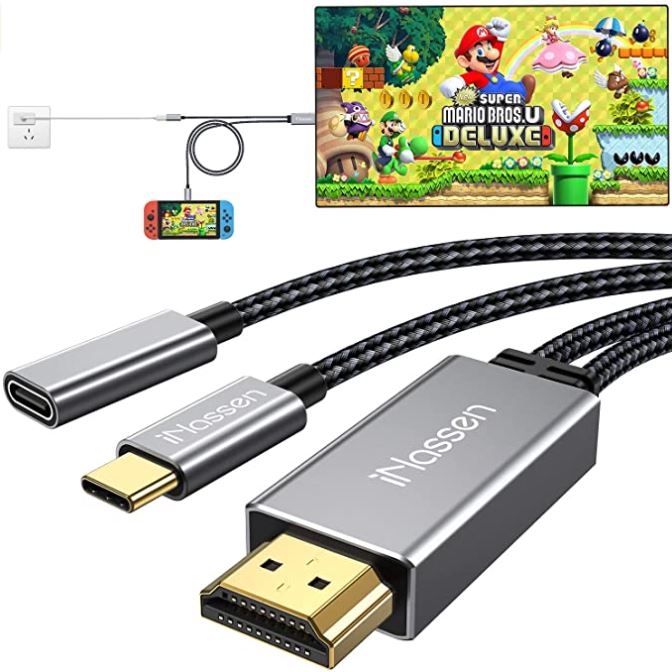 The iNassen USB-C to HDMI Cable is a more direct solution than our first two options. Instead of a fob or a dongle, it’s a simple Y-shaped cable that connects to your TV. At one end, you’ll find a USB Type-C plug that connects into your Switch. At the other end of the cord, there’s an HDMI plug that connects into your TV or monitor. A secondary, 12-inch USB cord is also connected to the HDMI plug. This cord has a female USB Type-C port at the other end, for connecting to a charger. Considering the small size, it’s easy to coil up this adapter and take it with you on the road. 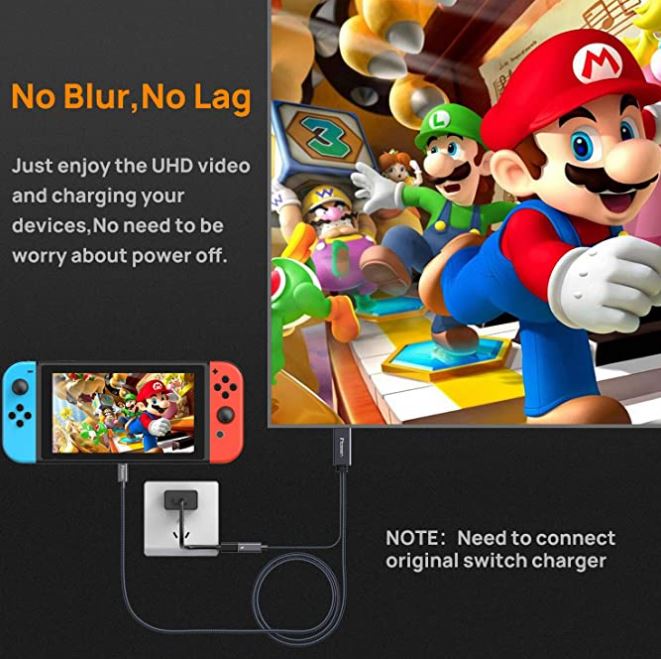 The iNassen adapter cable is protected by an 18-month warranty. If there are any defects in materials or workmanship, you can return it for a full refund. This is far more warranty than you’ll ever need. After all, it should be readily apparent whether or not the cable works. 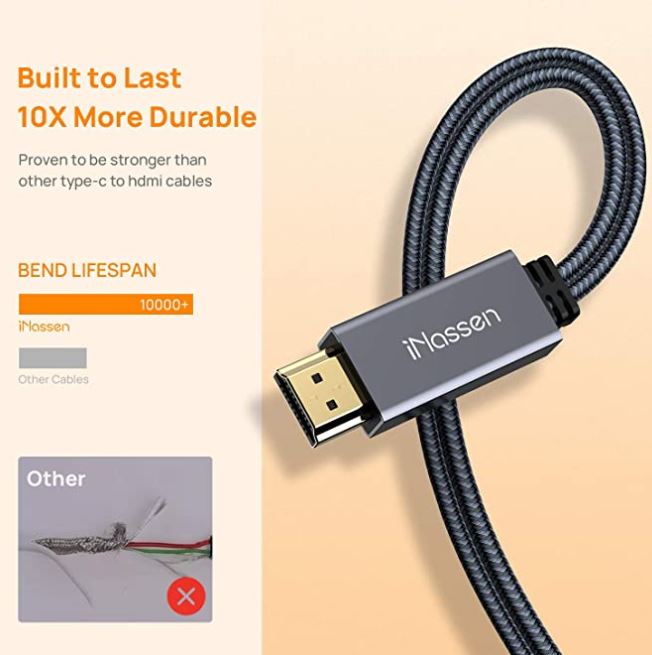 As with our previous options, you get better HDMi performance than the Switch requires. In fact, the iNassen cable can support 4K video at up to 60Hz. Despite this, it’s backwards-compatible with all resolutions as low as 360p. So it can stream old, low-definition YouTube videos if you need it to. This is all the better, since the iNassen cable is compatible with almost any device. If it can play video via USB Type-C, it’s going to work with this cable. 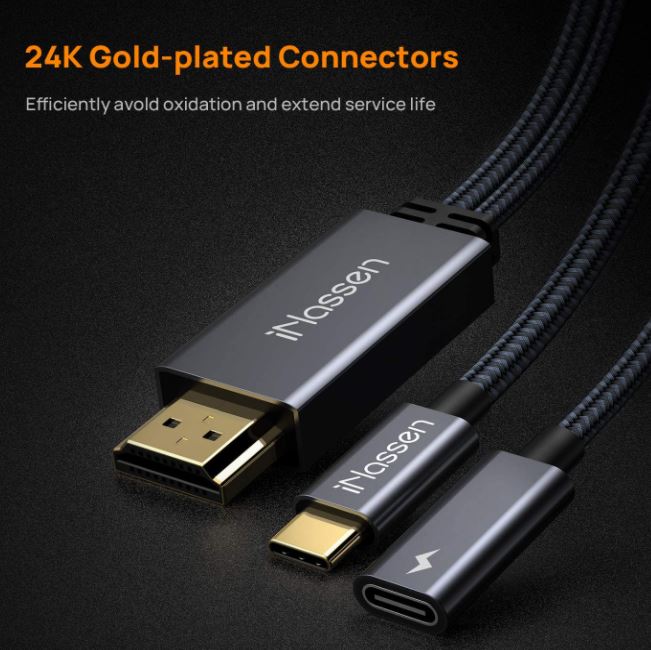 For all of this, the iNassen can also charge your Switch. It supports up to 60 watts of USB PD power delivery. This is way more than the Switch requires. And without any other peripherals to power, 18 watts will be more than sufficient.

Let’s go over what we’ve learned. The FOXMM USB-C to HDMI Adapter is the best in terms of sheer portability. Its compact size makes it easy to take just about anywhere. It’s also well-suited for playing with your JoyCon grips attached to the sides of the Switch. That said, connecting a bunch of peripherals might get awkward if you’re holding the Switch in your hands. Moreover, the fit is close enough that you might have trouble with some beefier cases. But if you want the smallest, most durable adapter possible, this is a great choice.

The INTPW USB-C to HDMI Adapter has a more traditional, dongle-style design that keeps it clear of your hands. It only has one USB port, though, and it requires power instead of it being optional. But it’s compatible with most devices, and it works well even if your Switch is in a protective case.

Last, we looked at the iNassen USB-C to HDMI Cable. This is a simple adapter cable, without any connections for other devices. However, it doesn’t require you to carry anything else, and it’s six feet long. If you want a simple, all-in-one solution, you’re looking at it.