The Xbox One is one of the most popular consoles out there. It brought us some of our favorite games, like The Witcher 3 and Warzone. To be fair, it’s now a last-gen console. If you want to play the latest games, you’ll be far better off with an Xbox Series X or S. That said, the Xbox One still has a lot of life in it. There still haven’t been many truly “next-gen” titles yet. And with Xbox Game Pass, you still have access to scores of your favorite titles. Even if you have a Series X, an Xbox One can be great for your spare room. It’s not like you need a high-performance system to play Minecraft or Fortnite, for example.

But like any machine, the Xbox One will eventually wear out. If your disc drive dies or the hard drive is unreliable, you could be in for an involved repair. Some repairs, like replacing the optical drive, will even require soldering. But not every repair needs to be a pain in the neck. One of the most common points of failure is the external Xbox One power supply. This makes sense, if you think about it. The power supply has an attached cord. If the cord is damaged, the entire power supply is no good. The supply itself is also vulnerable, especially if it sits on your floor, where it could be kicked. Thankfully, a power supply is much easier to replace than any of the internal components.

Today, we’ll be reviewing three of the best Xbox One replacement AC adapters we could find. We’ll begin with the Ponkor Power Supply for Xbox One. This is a long-lasting power supply with a powerful internal fan. Next, we’ll check out the Original Microsoft AC Adapter Replacement. This is the original OEM replacement, complete with Microsoft’s warranty. Finally, we’ll take a look at the YCCTEAM Power Supply Brick. This is a rugged, high-quality replacement with multiple safety features. To find out which power supply is the best, we’ll need to dig a little deeper into all three of their features. Let’s begin! 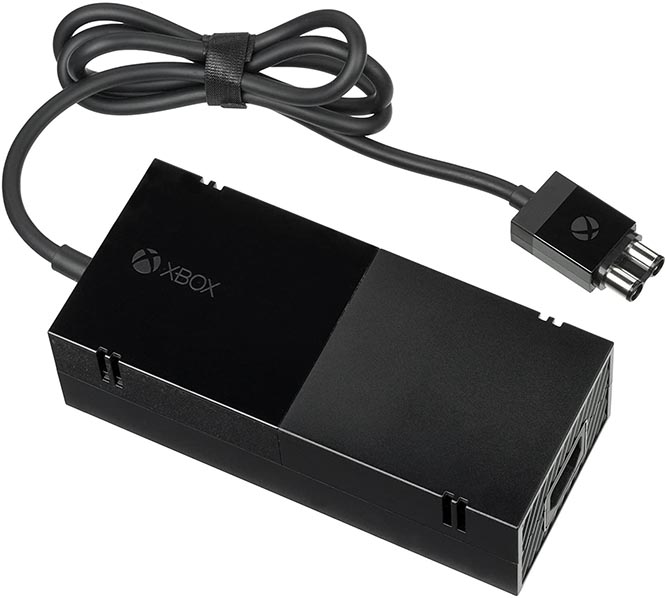 Why Buy a Replacement Power Supply?

So, why would you need to replace an Xbox One power supply? The glib answer is that it’s broken. But what can actually break inside? To begin with, there could be a major power surge. The power supply has an internal fuse to protect your console. When there’s a big power surge, this fuse will blow. That’s good news for your console, but there’s a problem: the fuse is not replaceable. You have to replace the entire power supply.

Another common point of failure is the cooling fan. The power supply produces a lot of heat when it’s under a full load. Without the cooling fan, there won’t be enough air flow, and the power supply will overheat. Internal overheating-protection circuitry should shut things down, so fire isn’t a concern. But you can’t play your games if your power supply shuts off every time it gets hot. In other words, it’s time for a replacement.

How to Prevent PSU Issues

If your Xbox One power supply fails, you’re going to need to replace it. It’s simply not worth fixing the internal circuitry if it’s become damaged. That said, there are a few things you can do to avoid a failure in the first place.

To begin with, plug your power supply directly into the wall socket if at all possible. It might be tempting to use a surge protector, but the power supply already has built-in surge protection. Using a power strip or extension cord reduces the amount of available power. This can put a strain on the adapter if you’re using other devices on the same circuit. Along the same lines, keep both the console and the power supply clear of obstructions. If the vents are blocked, it will strain the cooling fans, and cause the device to get excessively hot.

Another thing to be aware of is that the Xbox One power supply is covered by your manufacturer’s warranty. This only helps if you own a newer Xbox One console, which is becoming less common these days. Still, it’s something to keep in mind if you purchased your console within the last 12 months. 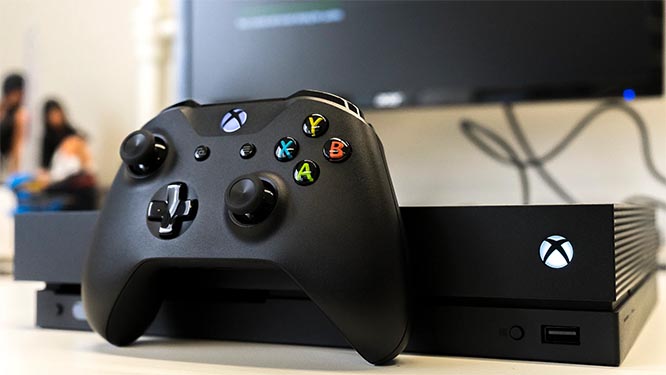 Let’s say your power supply has failed. Are you entirely out of luck? Not necessarily. There are a few situations where the power supply has only failed temporarily. This can happen when the capacitors become overcharged. To fix the issue, all you need to do is let the capacitors drain. This might sound intimidating, but it’s actually a straightforward.

A power supply reset will solve your problem. To do this, first unplug the cable that runs from the power brick to your console. Next, unplug the other cable that runs from the brick to your wall. At this point, the power supply will have no source of power. Let it sit until the orange light completely disappears. It doesn’t hurt to let it sit for a few more minutes to make sure the capacitors are completely drained. After a little bit, plug your console back in. It might suddenly come to life.

Another possible issue is that your power supply may have become clogged. If there’s a bunch of dust or pet hair covering all the vents, you’re not getting enough air flow. This can cause the power supply to overheat, at which point it will automatically shut down. Because the power supply isn’t running, you’re unable to use your console.

If you’re having power brick issues, take a look at the vents, and see if they’re dusty. If they are, unplug from the wall and your console, and clean those vents! You can use a keyboard vacuum or keyboard cleaning gel to get all the dust out. Once that’s done, plug everything back in and see if your console starts up.

The Xbox One is rated for 120 watts of power. However, this is actually the maximum power rating, when the system is under full load. During the course of normal operation, it’s normal for the console to fluctuate between 70 and 20 watts. In standby mode, you’ll draw considerably less: only 15 watts. If the console is unplugged, the power brick itself will only draw a single watt.

As a result, an Xbox One power brick needs to be able to provide variable wattage, with a maximum of 120. This is actually less than any other Xbox console. The Xbox 360 and One X draw up to 180 watts, while the Series X draws up to 200. 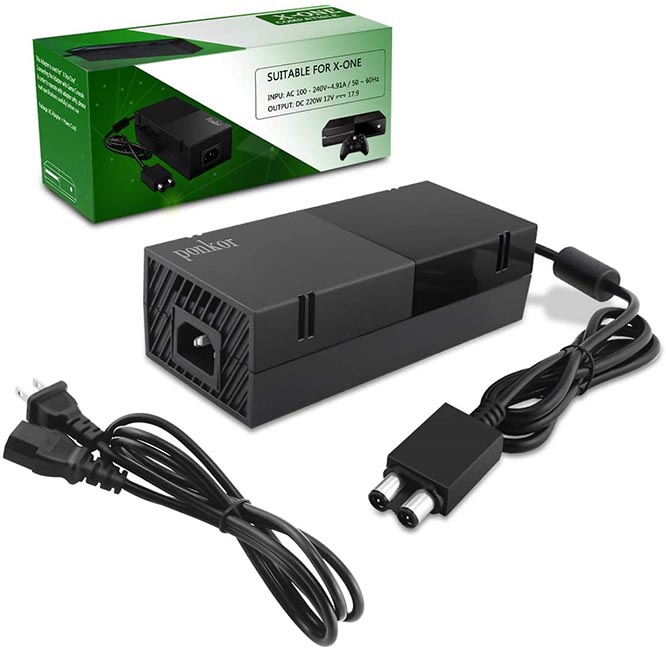 Ponkor Power Supply for Xbox One

The Ponkor Power Supply for Xbox One is a straightforward, plug-and-play replacement for the original power brick. It runs on standard wall power, and supports both North American and EU Voltages. An internal sensor automatically detects the input voltage, and adjusts the conversion process accordingly. As a result, you can use this adapter anywhere in the world, without having any compatibility issues.

This power supply is made from durable ABS plastic, just like the original. And like the original, it has internal circuitry to protect against damaged. Over-current, over-voltage, overheating, and short-circuits are simply not a concern. As an added bonus, Ponkor’s engineers have built improved cooling fans into the housing. This helps keep the power brick cool, while producing less noise than the original power supply. 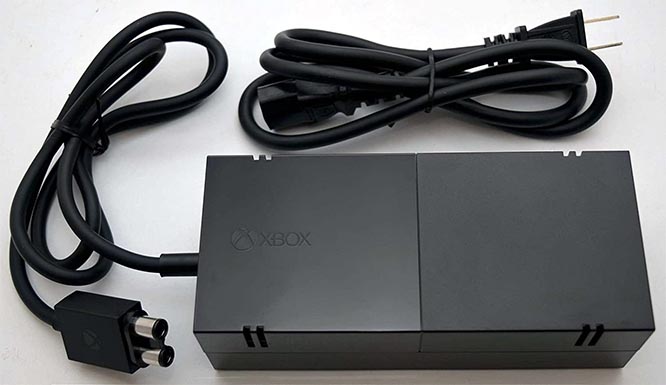 Microsoft is one of the biggest brands on the planet. In addition to Windows and the Xbox console, they also make other hardware and produce replacement parts regularly. And if you’re looking for an Xbox accessory, it makes sense to turn to the company that makes the system.

The Original Microsoft AC Adapter Replacement is identical to the original AC adapter. It’s an OEM replacement, with an identical form factor and features, and a long power cord. It’s only designed for North American use, so you’ll need an adapter to use it on 220V power. But it has the same LED indicator as the original, and performs just as well. If you liked your out-of-the-box adapter, this is the choice for you. 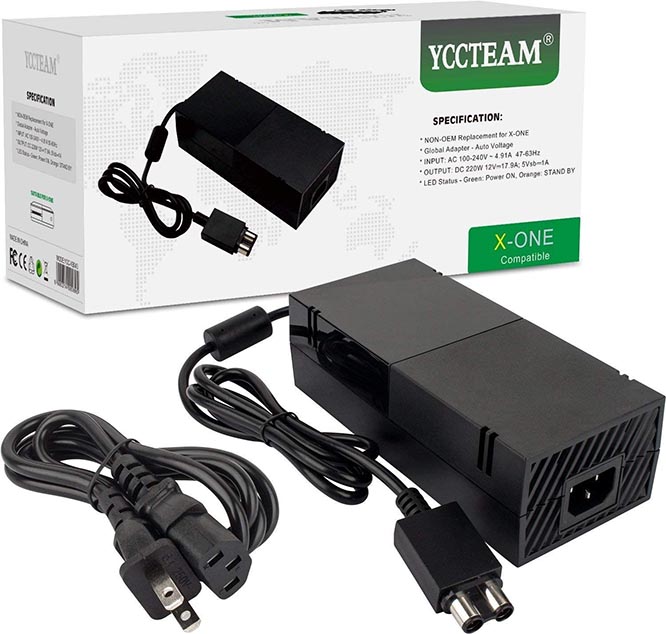 YCCTEAM is well known for their game console accessories. Not long ago, we reviewed their aftermarket PS4 controller, and we were genuinely impressed. So for our third Xbox One AC adapter, it made sense to check out their catalogue.

Like any Xbox One adapter, the YCCTEAM Power Supply Brick has a two-part design. It consists of an AC power cord, along with a large brick to convert the AC power to DC. Like the Ponkor power supply, this one has a quieter internal cooling fan than the original. It’s also rated to run on both 110 and 220-volt power. If you’re gaming outside the US, you won’t run into any issues with compatibility.

The brick itself has an LED light that indicates the current power status. In standby mode, it shines orange. When the console is actively running, it will turn green. And safety is no concern. With overheat, over-current, over-voltage, and short-circuit protection, the YCCTEAM brick is exceptionally safe.

At the end of the day, all three of these adapters are worth using. But which one is right for you? The Ponkor Power Supply for Xbox One is the quietest of the bunch. Its upgraded fans keep the housing cool with a minimum of noise. It’s also usable throughout the world, whether you’re drawing 110V or 220V power.

The Original Microsoft AC Adapter Replacement is a tried and true favorite. It doesn’t have any improvements over the original, because it is the original. But as the saying goes, “If it ain’t broke, don’t fix it.” If you were a fan of the original design, you’re going to be pleased.

The YCCTEAM Power Supply Brick is a great choice for safety and ease of use. The dual LED light indicators keep you posted on the current power status. There are several safety features built in, which keeps your home and your Xbox safe. And just like the Ponkor adapter, you can use it anywhere in the world, with either 110V or 220V power.