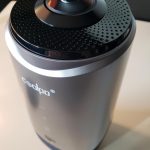 Even before Covid, video conferencing was a growing part of how we do business. Instead of flying a dozen people from around the country to one location, it’s more affordable to do everything online. And while some businesses may have resisted, Covid has forced them to adapt. Now, even old-school holdouts are starting to admit the obvious: video conferencing is here to stay.

But this begs the obvious question. What happens when we all go back to working in person? How do you manage a video conference where there’s an entire office team on either end? With a traditional webcam, everyone in the room would need their own camera. This would involve a bunch of different video connections, with everyone in the room staring into their computer. In this sense, it would negate the point of having a local team working together in the same room. They wouldn’t be making eye contact, and passing papers or other physical documents could be awkward.

One popular answer has been to use a single webcam for the entire room. But that leads to all kinds of issues. If everyone in the room is sitting around the same table, where do you point the camera? To solve that problem, Coolpo has designed the Video Conference Camera. This camera sports a 360-degree lens that’s designed to cover an entire conference table. It also has directional mics for picking up everyone’s voice equally. But how well does this work in practice, as opposed to in theory? To find out, we’re about to take a deep dive into the Coolpo Video Conference Camera. We’ll look at all its relevant features, quirks, and benefits. After that, we’ll sum everything up in a final verdict. 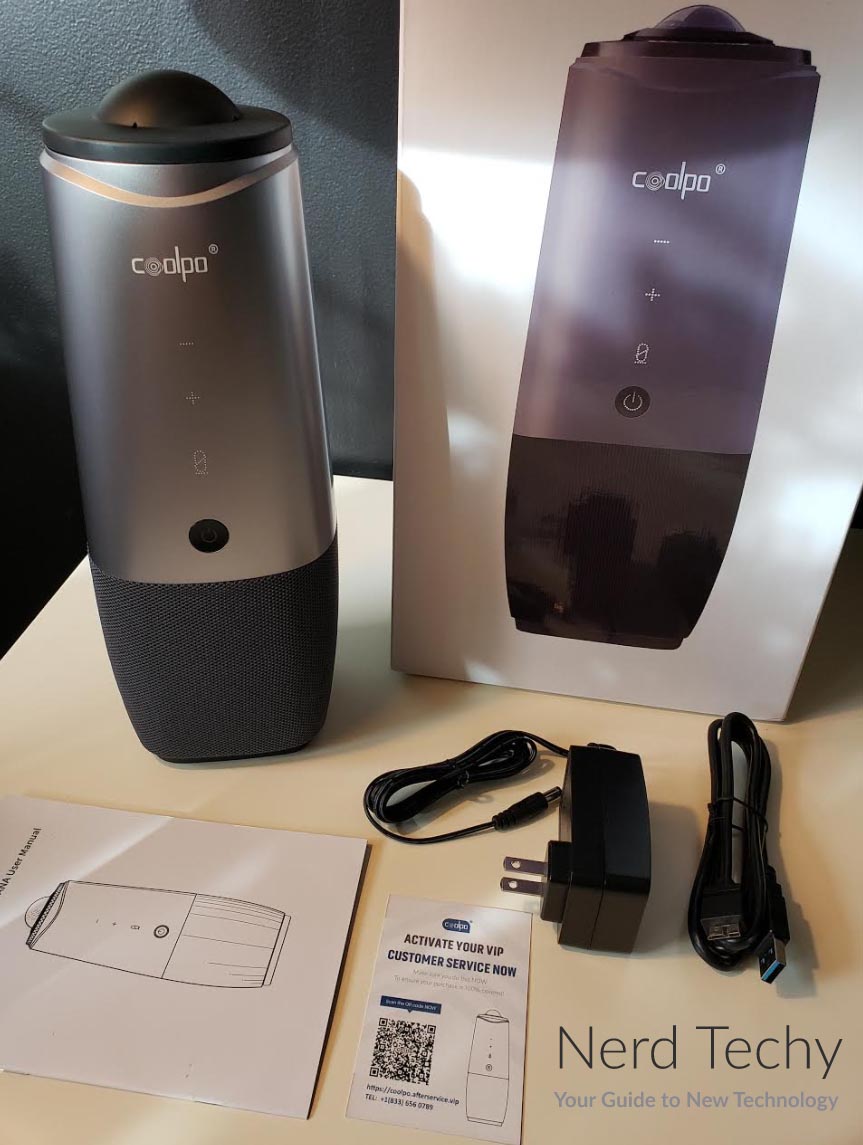 The first thing you’ll notice about the Coolpo Video Conference Camera is that it doesn’t look like a camera. At first glance, it just looks like a fancy conference speaker with an infrared receiver on top. However, if you look a bit closer, you’ll notice that the infrared receiver is actually a large fisheye lens. It sits in a black textured cap that protrudes only slightly from the top of the housing. The housing is constructed from a silver-grey plastic with a slight sheen. It will look right at place in most professional environments. 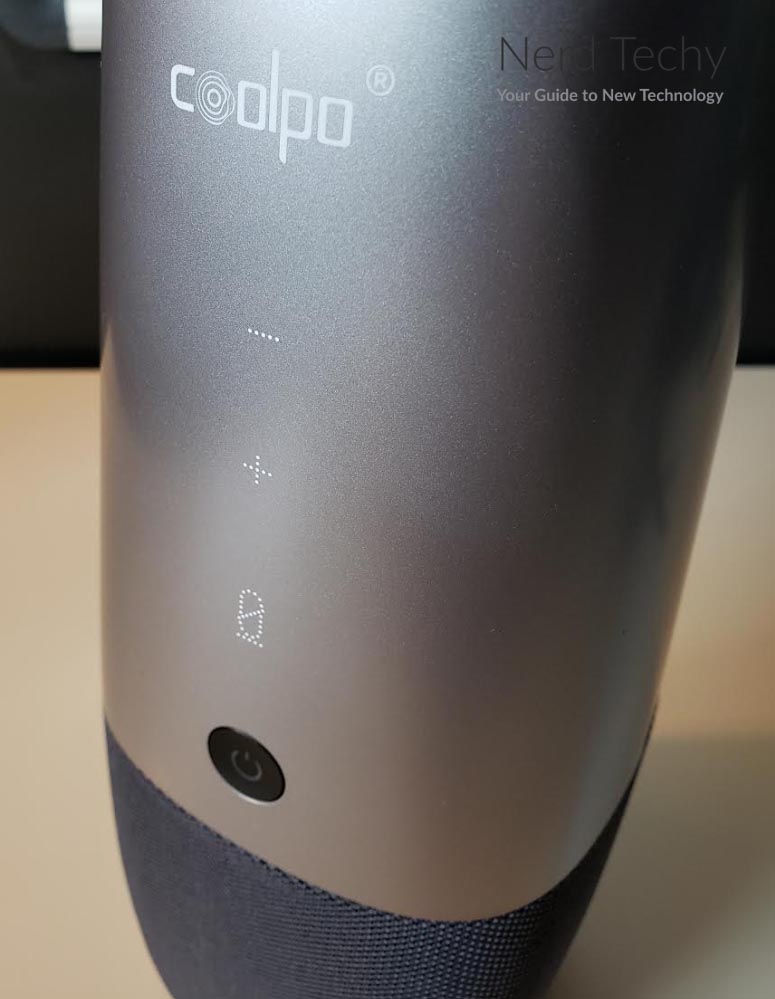 A little over halfway down, the housing meets a soft speaker mesh. This is black fabric, similar to what you’ll see covering many speaker cones. About halfway through the speaker, the housing again tapers inwards, and is slightly narrower at the base. This gives it a profile analogous to a square vase. At its widest point, the unit is eight inches on each side, and it’s 14 inches tall overall. It also tips the scales at 4 ¼ pounds. This makes it a bit hefty to carry in a backpack, but not too difficult to move around an office. 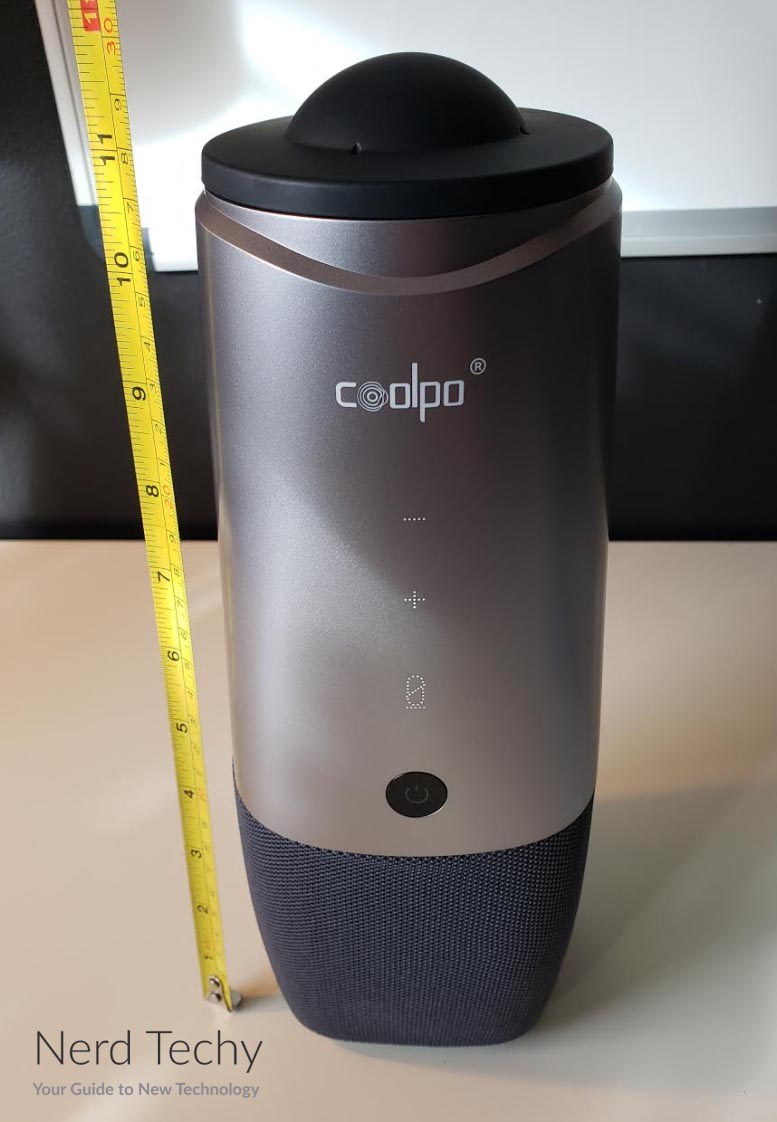 That said, this is probably more than you’ll want if you’re just video conferencing by yourself. If you need a camera for your home office, or just for you as an individual, consider the Logitech Brio. It’s designed to work with most major services, and it can stream in full 4K. That said, it doesn’t have the same conference features as the Coolpo camera.

The Coolpo’s controls are located on the front of the housing, and are fairly intuitive. At the bottom, there’s a big black button for powering the camera on and off. Above that, there are an additional set of three soft touch buttons built right into the housing. These buttons have LEDs built into them to let you know when they’re in use. The bottom button is used to mute the mic, while the top two are used to adjust the volume. 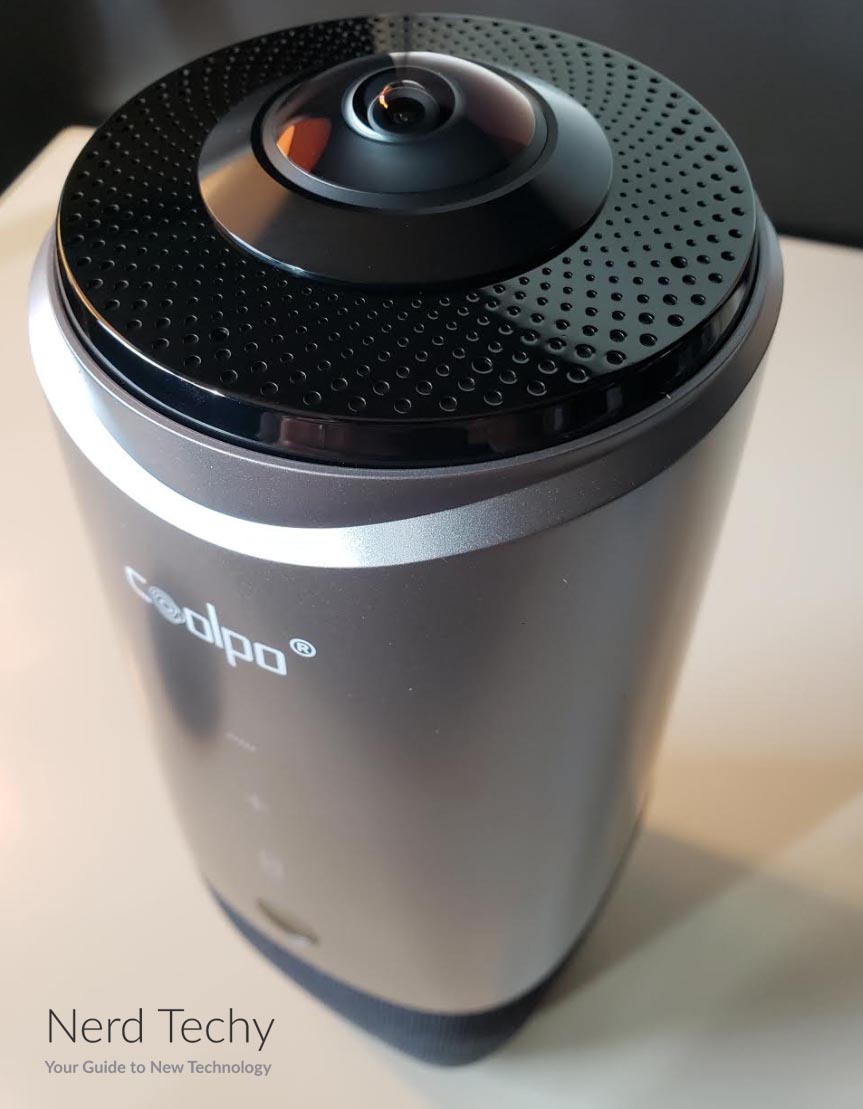 Along with the camera itself, you get a USB cable and a DC power cable. The DC power cable is a bit short, which disappointed us, since this means placement is a challenge. If there’s no power supply at the center of your conference table, you’ll need an extension cord. That said, the camera is protected by Coolpo’s 12-month manufacturer’s warranty. This ensures that you’re covered for any defects in materials or workmanship.

The Coolpo Video Conference Camera can stream in 4K, 1080p, or 720p. Now, you might be wondering why you would want to stream in 720p when your camera is capable of 4K. The answer is that not all streaming software supports all resolutions. Furthermore, not all internet connections can handle 4K streaming. Even the most powerful connections can get too slow on a bad day. By giving you a variety of options, Coolpo ensures that the camera works with most software. The on-board AI will automatically adjust the resolution as needed for your situation. 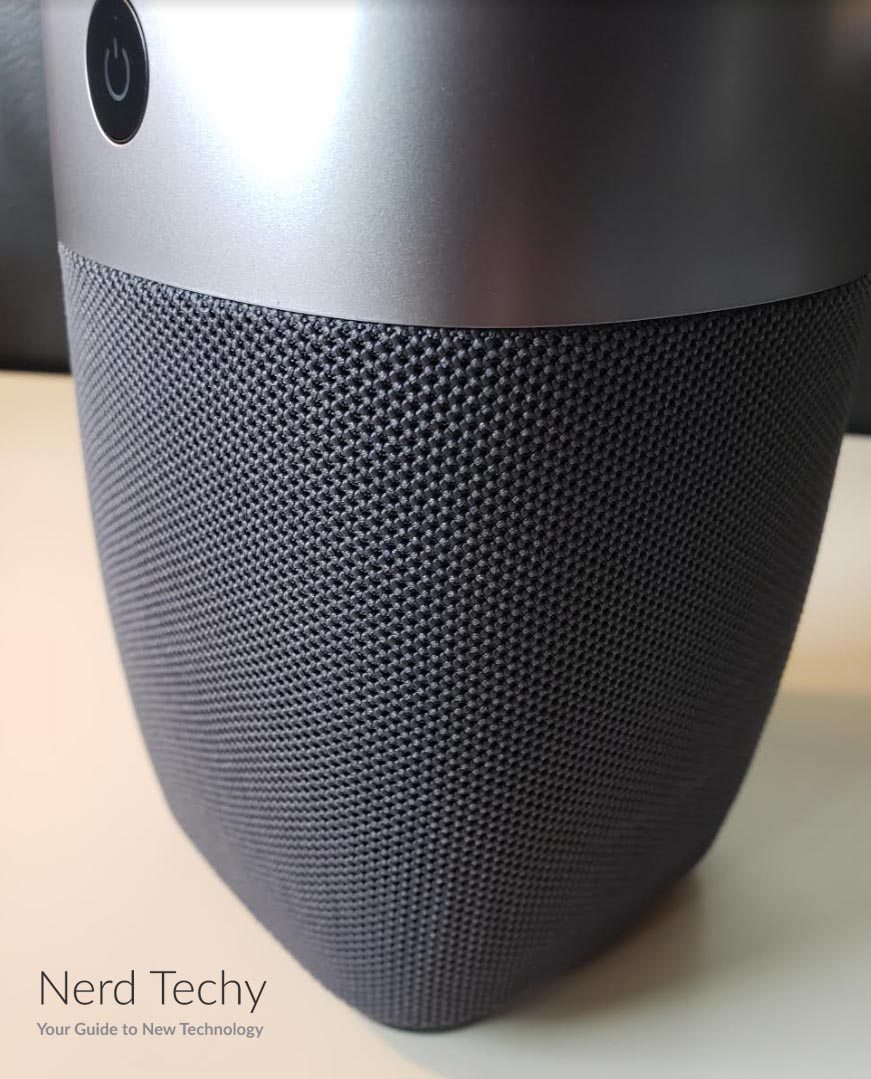 The lens records a full 360-degrees, so you can cover an entire conference room. It also has a 60-degree vertical field of view. This is fairly wide for a webcam, but there’s a reason for that. An ordinary webcam only needs to point at one person. It’s designed to focus tight on your face. If you’ve got 10 people sitting around a conference table, they’re all of different heights. Compounding that, some may be sitting up straight, while others may be slouching. By engineering a wide vertical field of view, Coolpo ensures that everyone’s face will be in the frame.

There are four built-in microphones, which will automatically point towards whoever is speaking. Between four of them, you’ll get good directional coverage all around the table. You can even cover a fairly large room. The mics will pick up anyone within 15 feet of the unit. So if it’s positioned right in the center of the room, you could cover a room that’s 30 feet across. The mics also have a built-in noise reduction feature. This isn’t like smartphone noise reduction for loud environments. It’s designed to drown out the drone of distant traffic, or the whir of an air conditioner. For those purposes, it’s very effective. 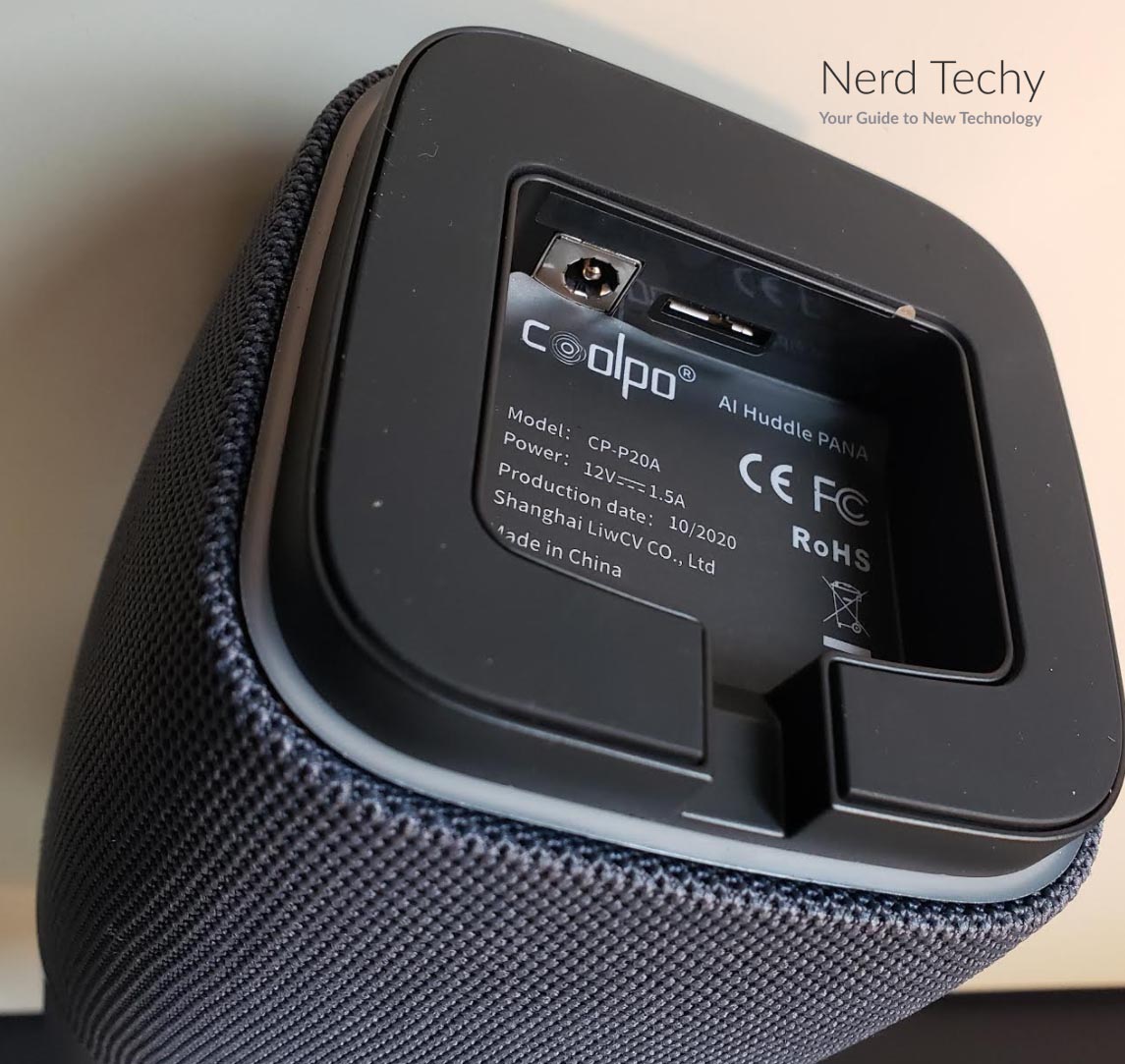 The built-in speakers are loud enough to clearly hear the other person, even if they’re a soft talker. The audio quality is only so-so. You won’t have trouble understanding the other person, but there’s definitely some fuzz. If you want better audio quality, you’ll need to use a different audio source. That said, you’ll already be using a projector or computer to view the video feed from the other person. It’s not too much of a stretch to set up an alternative audio source and be done with it. For instance, if you already have speakers to use with your projector, you can use those.

The Coolpo Video Conference Camera is one of the easiest to install and set up. Aside from the power cord issues, there are no issues with connectivity. It works with Windows, Apple, and Android systems right out of the box, with no drivers required. It also works with all the most popular video conferencing apps in use today. Among others, the Coolpo camera is plug-and-play with Zoom, WebEx, Skype, Microsoft, and Google Hangout. That list alone covers the vast majority of video conferences on today’s internet. 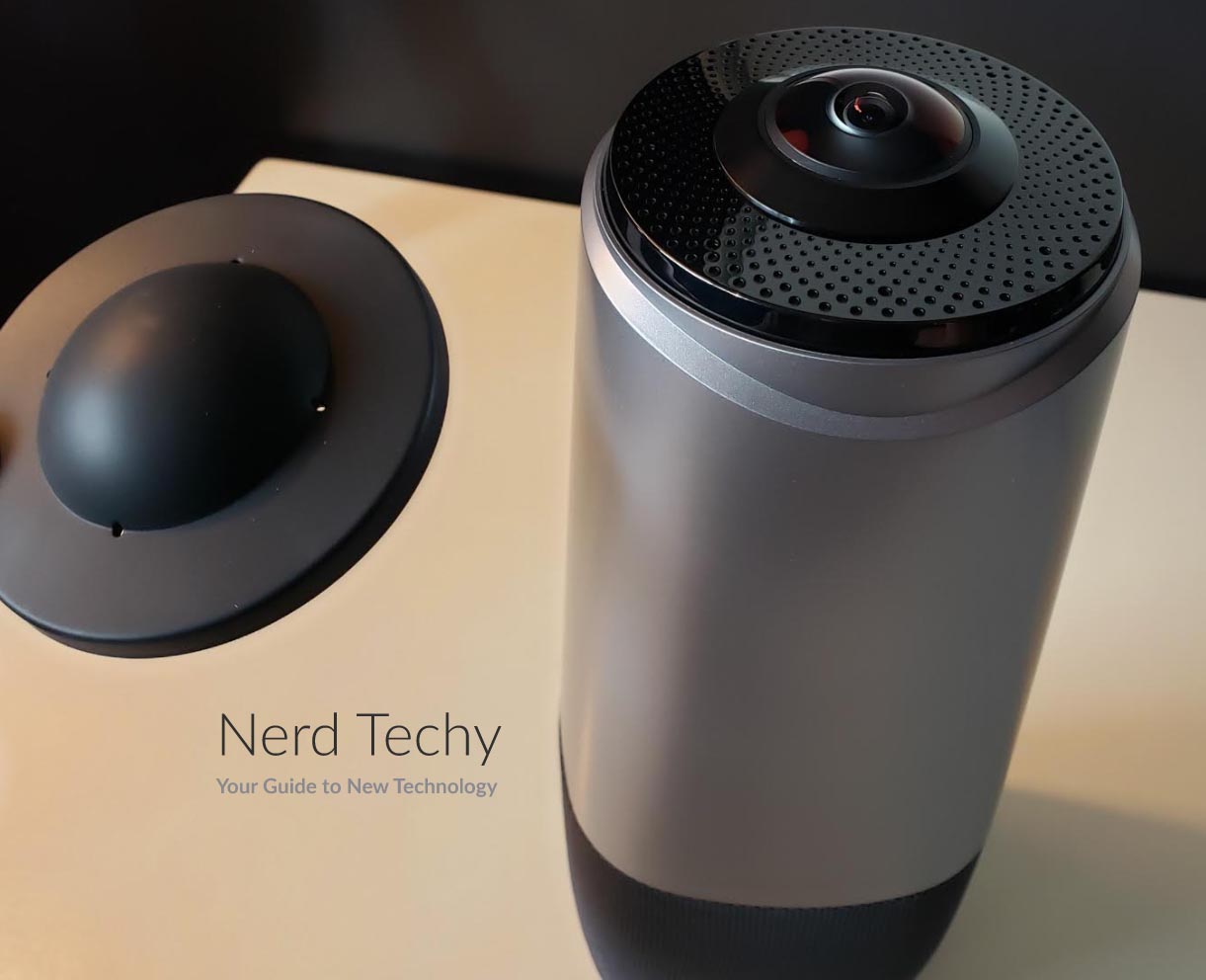 The Coolpo camera has a built-in AI that provides facial recognition and sound recognition. Using these tools, it’s able to determine who in the room is speaking, and focus on them. In panoramic mode, this means simply adjusting the camera’s focus. However, the split-screen mode also allows the internal software to create three smaller video streams. This way, you can get a better focus on everyone’s face, and a tighter camera angle on each screen. In all, this software works up until there are about 15 people in the room. If there is a very large crowd, or if the room is tightly packed, the camera starts to get confused. Even so, it works very well under most circumstances. 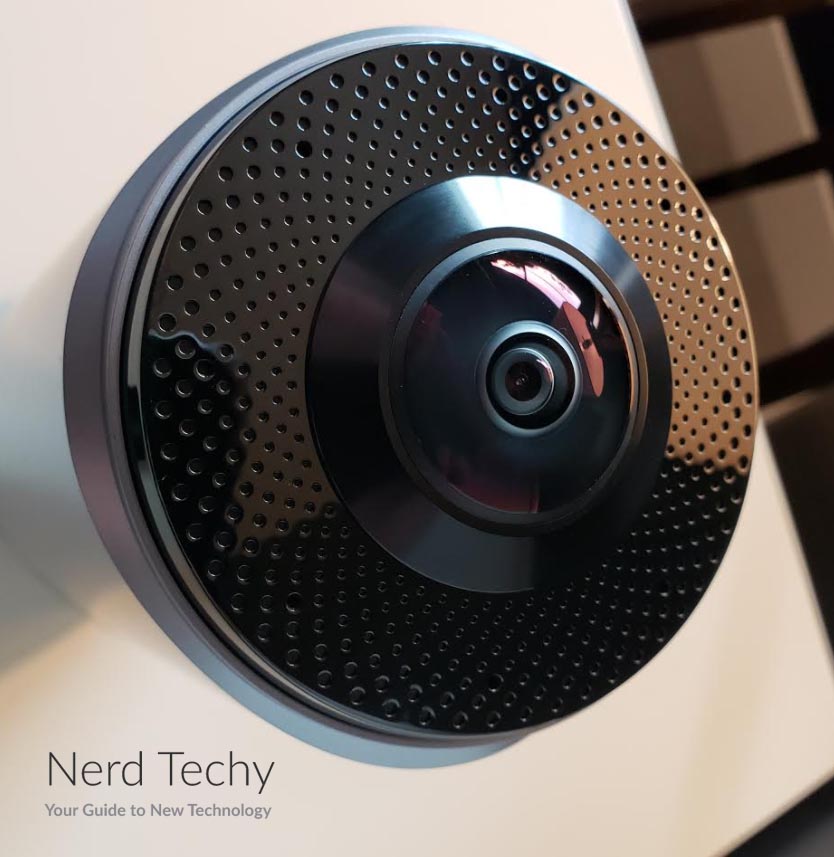 Unfortunately, there’s a major drawback here. While we appreciate the Coolpo camera’s plug-and-play design, there’s no companion software whatsoever. This means that the on-board AI handles everything. When the AI does well, this is a good thing. When the AI gets it wrong, there’s no way to manually correct things. For instance, you can’t control where the three screens are in split-screen mode. The camera decides for you. Furthermore, there’s no way to manually tag who is speaking. If someone right next to the camera opens a breath mint, it’s liable to think they’re speaking instead. You can’t even choose whether to work in panorama or split-screen mode. The AI decides for you.

Another unique, AI-operated webcam is the Realsense T265. It utilizes two cameras to visually map an area, and can be used to automate drones. That said, it doesn’t have any audio capability, so its video conferencing uses are somewhat limited. 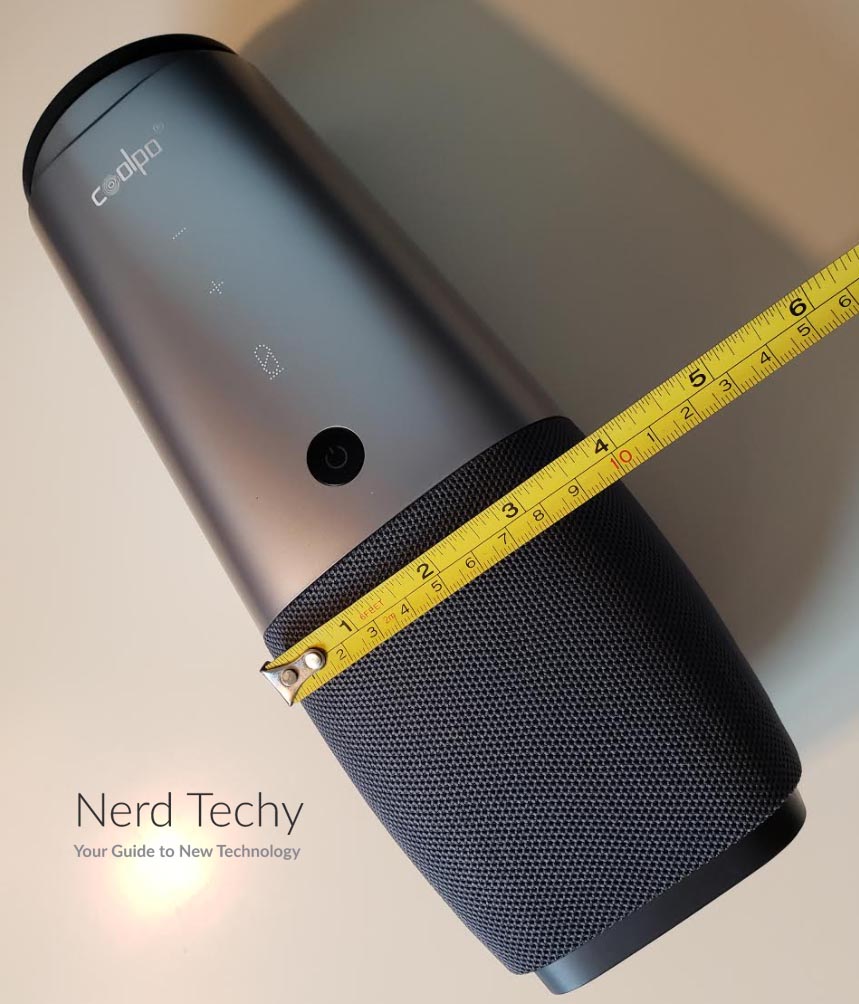 So, does the Coolpo Video Conference Camera live up to our expectations? In most regards, yes, but there are some important drawbacks. Most importantly, there’s no way to control where the camera focuses. This is a huge failing for a camera that’s supposed to record multiple people. We get that Coolpo was trying to make their camera as accessible as possible. Without companion software, they could focus on plug-and-play compatibility. That said, we were very disappointed in this feature. The mediocre audio quality is less of a concern, and there are easy workarounds.

On the other hand, there’s a lot to like here! The 4K video is beautiful, and can downscale as far as 720p if you need it to. Furthermore, the 360-degree camera is a huge plus in a world where video conferencing is the new normal. Finally, the directional mics do an excellent job of picking up audio from anywhere in the room. The Coolpo Video Conference Camera is an ambitious, if flawed, creation. But if you need a 360-degree video conference camera, it’s as good a choice as any.

Guide to the Best Thermal Laminator Machine in …
January 3, 2022

Best Captioned Telephone for the Hearing Impaired in …
February 21, 2022