When it comes to mice, most consumers are pretty familiar with the common options. Chances are, anyone reading this is using either a standard mouse or a track pad. If you wanted to get technical, you could narrow it down. There are laser mice, optical mice, and there might even be a few ball mice kicking around. For most, we choose our mouse based on price and convenience. Anything unique is often considered either outdated, or too niche to be used broadly.

If you ask the right person, you might learn that that the mouse you’re currently using is inferior to another technology on the market. Trackball mice are hardly new. They’ve been on the market for decades. But according to some, this is the absolute best way to control your cursor.

Trackball mice offer improved ergonomics and higher levels of accuracy. The biggest drawback is the learning curve. As most trackballs place the control surface at your thumb, it takes a little while to get used to using this finger to control your cursor. Elecom’s M-HT1DRBK Trackball promises to fix this issue by moving the ball to the top of the mouse, allowing it to be controlled by your pointer finger. How does this design stack up to common trackball mice? Should you trade in your laser mouse for a trackball? To answer these questions, we decided to try it out for ourselves. 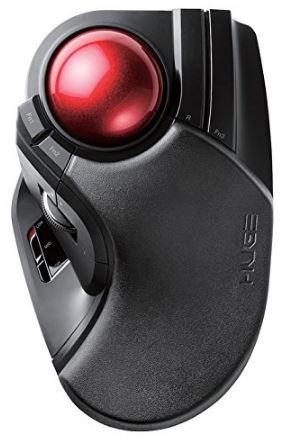 At first glance, the Elecom M-HT1DRBK Trackball appears to be something out of a science fiction movie. The bright red ball is reminiscent of HAL 9000, and the sharp angled lines have a very 90s appearance to them. That being said, this trackball still looks modern, and it’s got the buttons to prove it. With 8 different buttons available, this trackball has enough features to impress both gamers and office workers alike.

The first thing you should prepare yourself for is the sheer size of this thing. Measuring 181mm by 114mm, it’s nearly double the size of a standard mouse. This allows your entire hand to sit flat on it, supporting your hand from the bottom of your wrist to the tip of your fingers. 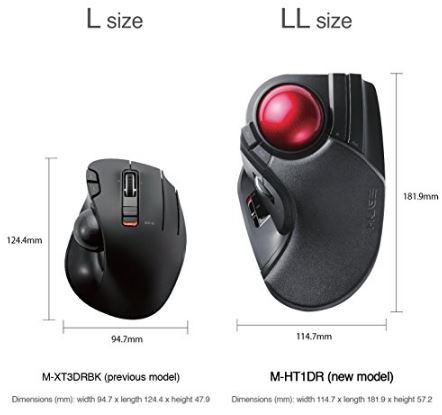 To imagine what it’s like to use this trackball, imagine that you’re picking up a grapefruit in your hand. Your thumb sits off to the side, while your three rightmost fingers are slightly splayed outwards. These fingers sit flat, while your pointer is ever so slightly hooked. This gives you a large range of motion to move the trackball, but keeps clicking simple with its large keys.

Make no mistake, this mouse may be large, but it will fit hands of all sizes. The buttons are elongated and can be pressed from any direction. You just let your hand sit naturally, and the buttons happen to be located in the natural resting spot for your fingers.

The main advantage of this is that you can keep your wrist in a neutral position. You’re not cranking it to the left and right, reducing strain on your tendons. If you spend long hours at the computer, this can help you prevent carpal tunnel. If you already suffer from a wrist disorder, using this mouse can prevent the pain that you associate with common mice.

While your wrist is given the opportunity to rest, what about your finger? Isn’t this just replacing one repetitive motion with another? With a standard mouse, you’ve got to physically move the entire mouse across the table. While we don’t often think of the force behind this motion, it is a lot of strain. On the other hand, the trackball glides almost effortlessly. Elecom uses bearings made from synthetic ruby. This is a very smooth surface that requires very little force to move. This makes using this trackball even easier than pressing the key on a keyboard or writing with a pencil. 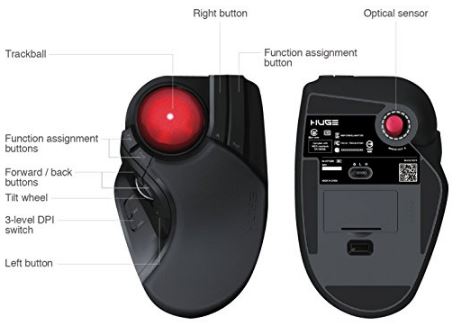 The two most important buttons on a mouse are the right and left buttons. You could do without any of the others, but these are buttons you’re going to be using every minute you’re on the computer. Your pointer normally controls the left button, but it’s now busy using the trackball. This means that Elecom had to move the left button to the side, where it can be actuated by your thumb. The left button is very large, and it only requires a simple squeeze to actuate it. We got used to it almost immediately.

The right button is still controlled by your middle finger, located to the right of the trackball. Next to that is the third function key, actuated by your ring finger.

Two more function keys are located to the right of the trackball. These require you to move your pointer to use them, so these should be used for infrequent commands.

Next to your thumb, you’ll find a scroll wheel which can be depressed – just like most common mice. Above that are two navigational buttons. These come mapped to the page up and down keys, although you can reprogram them just like all of the other function buttons. 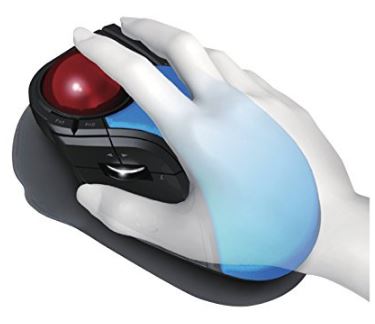 One of the key advantages to a trackball is increase accuracy. Unfortunately, this can cause issues with modern operating systems. If the trackball is extremely sensitive, one tiny motion can send your cursor launching across the display at top speed. For this reason, Elecom provides a three-way switch that lets you choose between high, medium, and low sensitivity. This works out to be 500, 1000, and 1500 DPI respectively.

For basic office applications, you’ll want to stick to 500 DPI. This doesn’t provide any additional resolution, but makes the mouse easy to pick up and use without having to adjust the speed. If you’re gaming or doing graphic design, you’re likely working within an application that supports higher DPIs. In this case, you can increase the resolution to ensure that even subtle movements are picked up. This is fantastic for first person shooters, and works much better than a standard mouse in Photoshop. 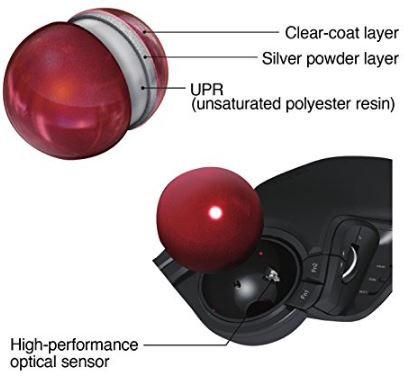 At 112 grams, this is one heavy mouse. But as soon as you touch it, you’ll understand why it’s so heavy. Every moving part was built well beyond our expectations. It’s extremely solid, and the trackball glides with ease across the screen. The scroll wheel has the same level of precision, and feels slightly reminiscent of Logitech’s high end mice.

Both the left and right buttons use an OMRON switch. Just as mechanical keyboards offer an improved tactile response with mechanical keys, OMRON switches are the mouse equivalent. They’re not any louder than a standard mouse button, but you feel a very firm ‘click’ as you depress it. This might seem simple, but once you try it out you’ll be sold. These buttons feel better than any other mouse buttons we’ve used.

Trackball mice are not without their downsides. You’re relying on a rolling mechanism to translate your movements into a digital signal. With your fingers on the trackball, there is a chance that grease and dust can accumulate over time. Once in a while, you’ll have to remove the trackball and wipe it down with a cloth. The process is fairly simple, but it’s not something you’ll have to do with optical mice.

We also have one minor gripe with the mouse buttons. On the left and right buttons, high end OMRON switches provide a high level of tactile feedback. But only these two buttons have these switches. Once you get used to these switches, all of the others feel a little smushy. The other buttons are no worse that any standard mouse, but we would have preferred to see all buttons use these switches.

If you’re looking to try a trackball mouse, the Elecom M-HT1DRBK Trackball could be a great place to start. The trackball itself is extremely high quality. Cheap trackballs don’t provide the same smooth motion, making this a great way to get the full experience. When you factor in the high end switches and massive array of programmable buttons, there is something in this mouse for everyone.

If you’re a gamer or creative professional, you’ll get the most from this trackball. The additional buttons can be used to create complex macros, regardless of whether you’re playing Call of Duty or working in Adobe Premier. But even if you have no use for these buttons, the impressive ergonomics are enough justification to give this mouse a shot.

We do have to question the value of buying a wireless trackball. Since it doesn’t move around on your desk, it’s incredibly unlikely that a cable would be much of an inconvenience. It does make setup easy, but if you’re currently comparing this to a wired trackball we wouldn’t give this feature any weight.

Not sold on this unique form factor? If you’re already used to a trackball, you might prefer to use the side-mounted ball. There are plenty of great options in that category. You can read about our top three choices In our roundup of the Best Trackballs.