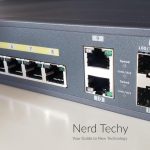 If you’re running a small business, an office, or even a home business, networking is no joke. We rely on our connected devices to work as they’re needed, when they’re needed. If your internet connection slows to a crawl or your printer goes on the fritz, it can ruin your day. Instead of working on important tasks, you’re troubleshooting a printer connection or rebooting your router. It’s no exaggeration to say that every dollar spent on better networking equipment can save hours of work later on.

But not all networks require the same equipment. For example, a simple home network can be fine with just a router. With more devices, though, you might need to install some switches and wireless access points. You might also need to deliver Power over Ethernet (PoE) to run certain devices.

Today, we’re going to review the EnGenius Cloud ECS1112FP 8-Port Gigabit PoE+ Switch. This is a networking switch that also provides PoE through all eight ports. It’s also designed to be rack-mounted for larger installations. But how well does it perform in the real world? And how are the configuration and the security options? To find out, we’ll need to take a deeper dive into its features and benefits. We’ll talk about how it installs, how it works, and how you make adjustments. Once we’ve given it a thorough examination, we’ll be able to render a verdict on the ECS1112FP. Let’s get started!

What’s the Difference Between a Switch and a Router?

Before we go any further, let’s talk about what a switch is — and isn’t — designed to do. Most people are already familiar with routers, and assume that switches are the same thing. After all, both of them are designed to facilitate traffic between multiple devices. But if you’re trying to build a home or business network, the differences are fundamental.

A router is designed to form as a point of contact between a local network (LAN) and the wider internet. It assigns an IP address to each device on the LAN, and stores those values in a routing table. When data flows in and out of the router, the router consults the table to determine where the data is sent. For a small home network, a router can be sufficient to manage the entire network’s needs. However, if you’re running a larger LAN, your router can eventually slow to a crawl.

The reason for this is that a router will need to manage two types of traffic. It has to handle traffic both inside the LAN and between the LAN and the web. As a result, connections can be slow for no apparent reason. Your PC can be sitting right next to a network printer, and it can take ages to print a document. If this is happening, your router has become bottlenecked. 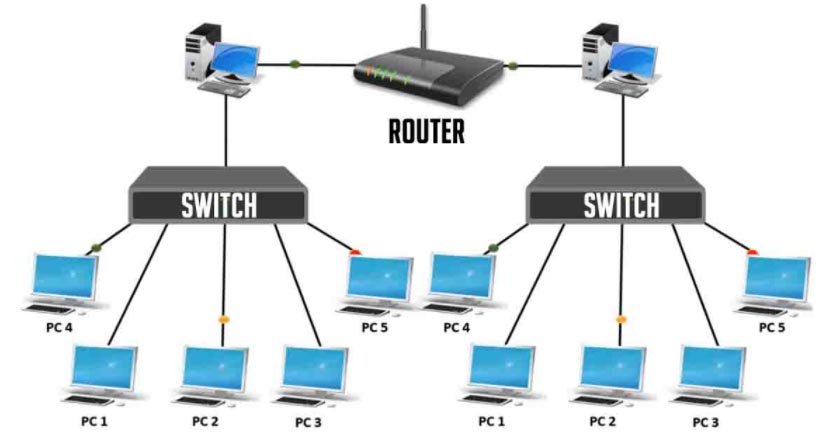 A switch is designed to take some of the workload off of your router. Much like a router, it will move data between devices within your network. However, it does this by using MAC addresses instead of IP addresses. MAC addresses are unique numbers assigned to individual devices when they roll off the production line. Similarly to a router, the switch stores these addresses in a table for future reference. By handling traffic between devices on the same LAN, a switch frees your router up to do what it does best. Your router can focus solely on managing traffic between your LAN and the web.

That said, a switch won’t work on its own. It doesn’t assign IP addresses, and can’t communicate with the web without the aid of a router. All devices on a switch share the same IP address, so a router is still integral to the process. Moreover, switches are used for Ethernet connections only. If you want to connect to a switch using a wireless connection, you’ll need a wireless access point.

What is PoE Used For?

Another potential point of confusion is PoE. Simply put, PoE is a technology for sending an electrical current along an Ethernet cable. But why would you want to do this? Don’t connected devices already have their own supply of power? In most cases, yes. However, there are some types of lower-voltage equipment that use PoE. For instance, many home security camera systems rely on PoE.

PoE offers several distinct advantages, beginning with ease of installation. For remote wired devices, you only have to run one cable instead of two. Similarly, you don’t have to find a power outlet that’s close enough, or install one if there isn’t. This doesn’t just translate into easier installation. It also means fewer materials to purchase, and fewer things to troubleshoot if something goes wrong. Finally, PoE is a set standard. You don’t need to worry about voltage variations or any related safety issues. 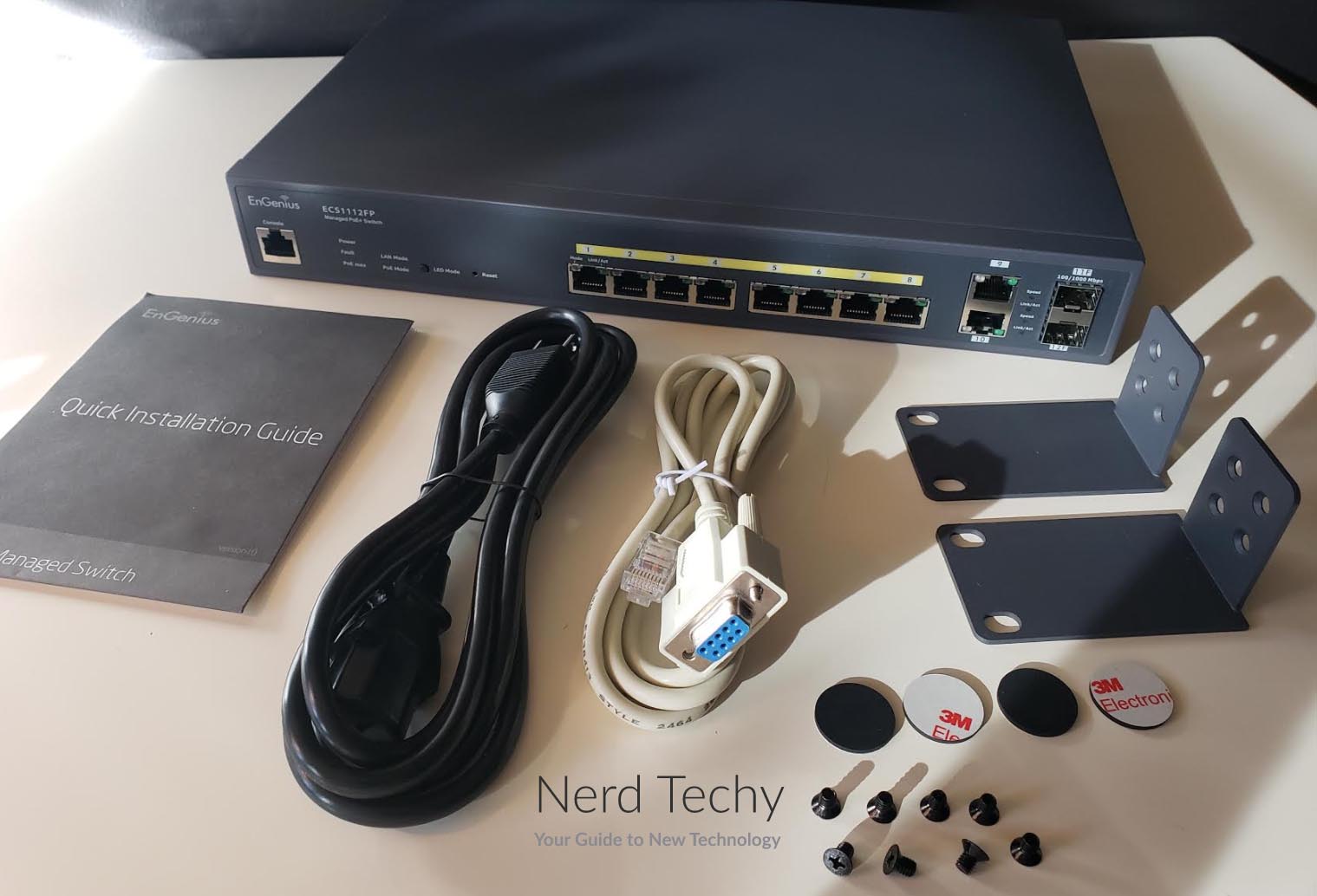 The EnGenius Cloud ECS1112FP is a standard, flat, rack-mounted unit that’s already tapped for mounting. Of course, there’s no reason it has to be used on a rack. It’s slim enough to store on a shelf, or to keep under a store counter. And at only 4.4 pounds, it’s not a beast to move around or mount.

The housing is constructed from rugged anodized aluminum, with a matte black finish. The sides are vented in a diamond pattern, which allows for plenty of airflow for cooling. On the back, you’ll find an input for the AC cord, which is detachable. All of the other ports and indicators are on the front. This makes it easy to connect all your devices without having to go around behind a rack. 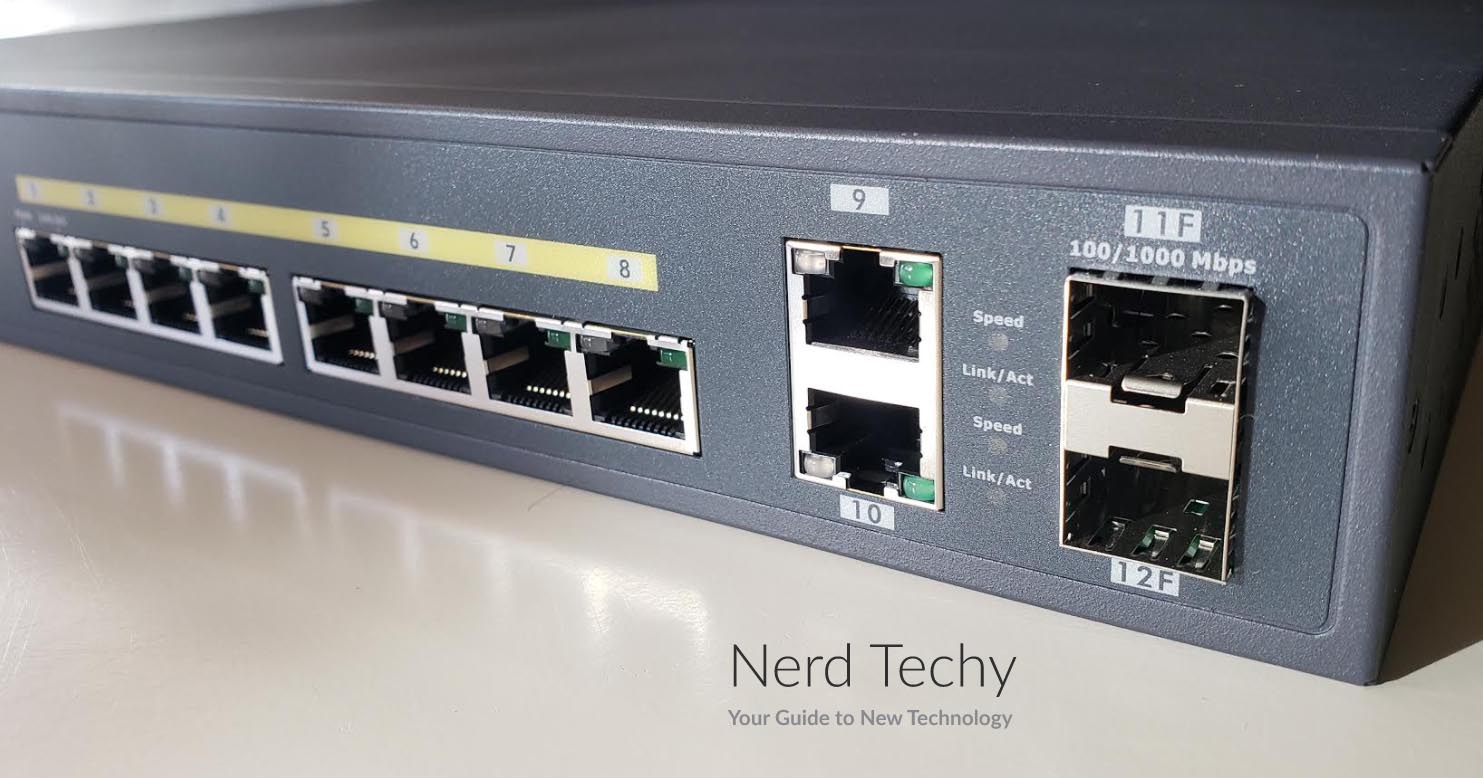 To the right, you’ll see the dual-speed uplink ports, complete with LED indicators. In the center, you’ll find a row of eight Gigabit Ethernet ports for connecting your devices. They all have built-in LED lights, along with numbered labels above them. As a result, it’s easy to keep track of what’s plugged into each port, and to diagnose connection issues. At the left, you’ll find your controls. These consist of a reset button, as well as an on/off button for the LEDs. Other than that, all controls will be performed remotely. There’s also a controller port. This can be used to connect a dedicated controller, such as the EnGenius SkyKey On-Premises Network Controller. 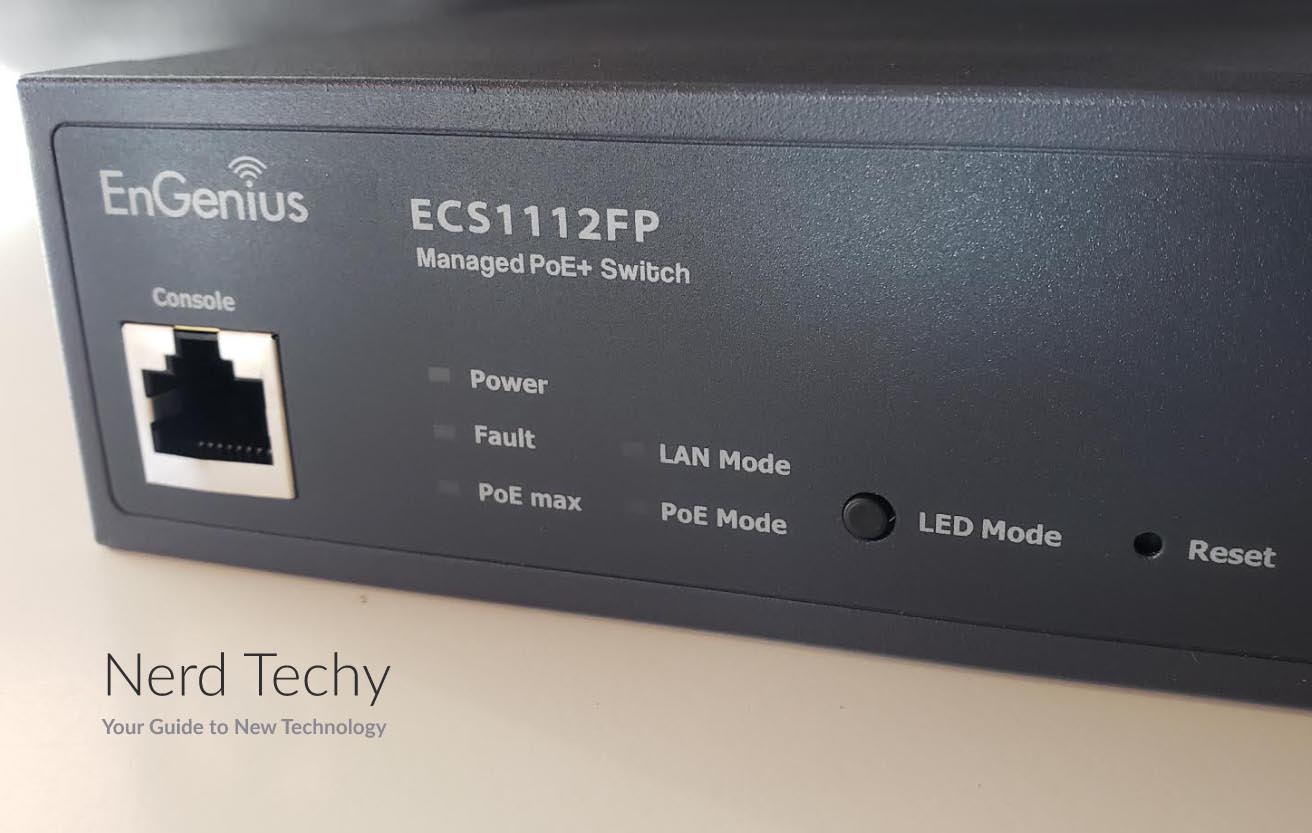 All eight of the ECS1112FP’s Ethernet ports are standard 10/100/1000 Base-T ports. This is normal Gigabit Ethernet, and should work with any connected device on the market. For a switch, the more important consideration is the overall capacity. The ECS1112FP has a total maximum switching capacity of 24Gbps. That’s enough for duplex connections on all eight Ethernet ports, the controller, both uplinks, and one other device. In other words, even if every individual device is maxing out its own Ethernet port, you’ll have capacity to spare. 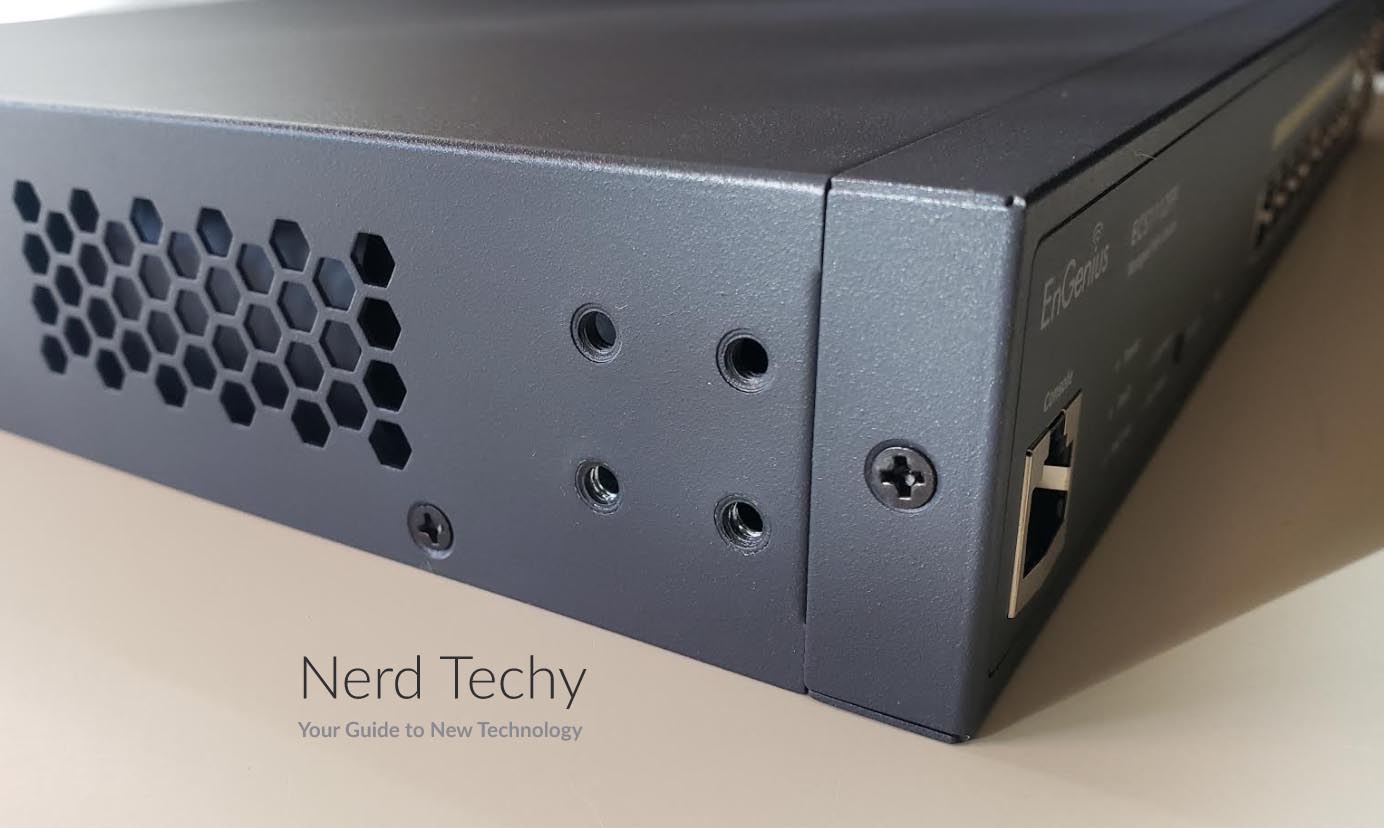 In terms of PoE, you once again get plenty of capacity. The total power budget is 130 watts. Split across eight channels, that works out to 16.25 watts per Ethernet port. PoE wattage, meanwhile, has a maximum wattage of 15.4 watts per device. Once again, you’re literally looking at more capacity than you could possibly use. 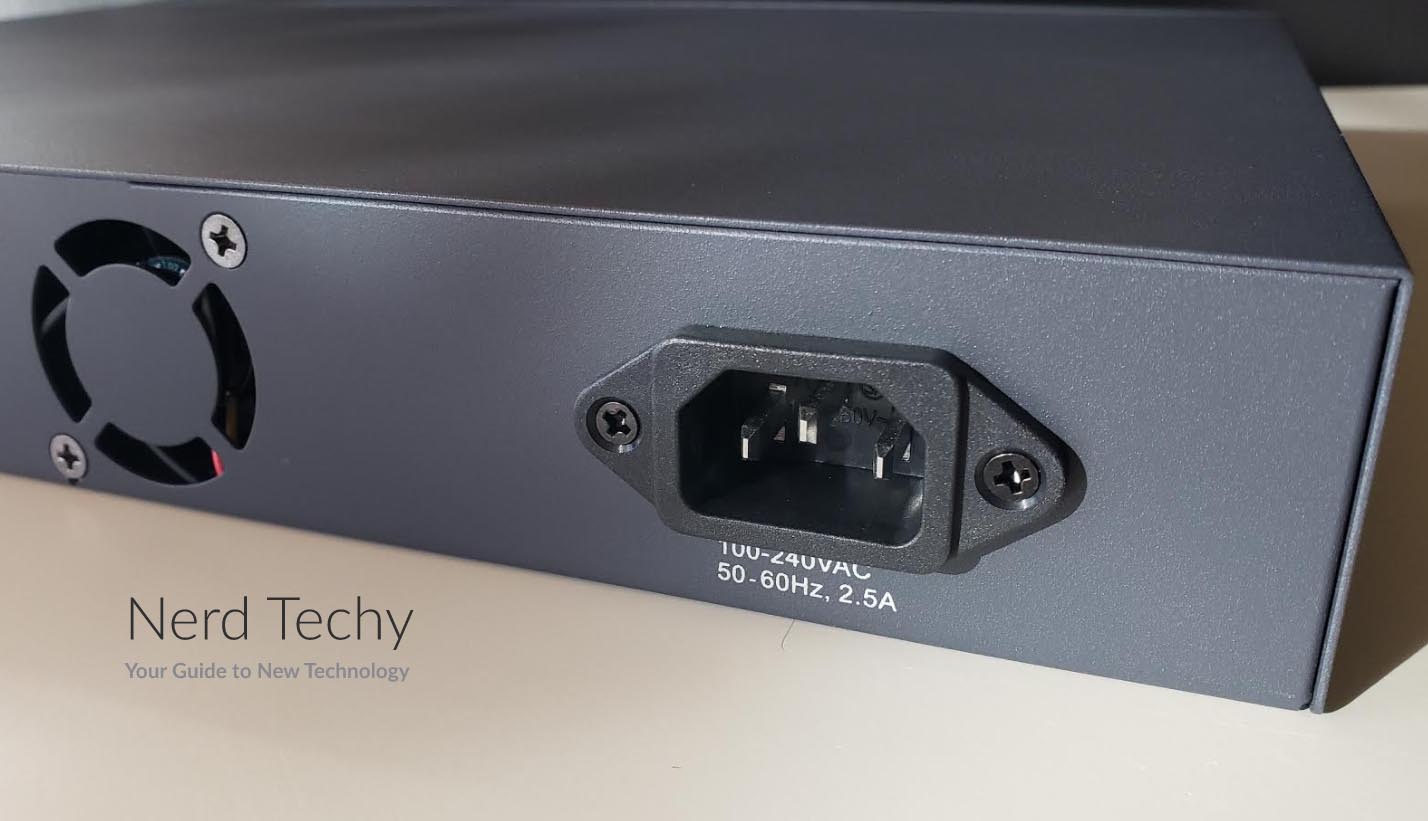 That said, the ECS1112FP is a hair on the pricey side. And under most circumstances, you’re not going to be maxing out eight devices simultaneously. If you want to save a few dollars, consider the EnGenius ECS1008p. It has the same cloud features and design as the ECS1112FP, but it’s more affordable. On the other hand, it’s also more limited. The switching capacity is only 16Gbps, and the PoE budget is only 55 watts. 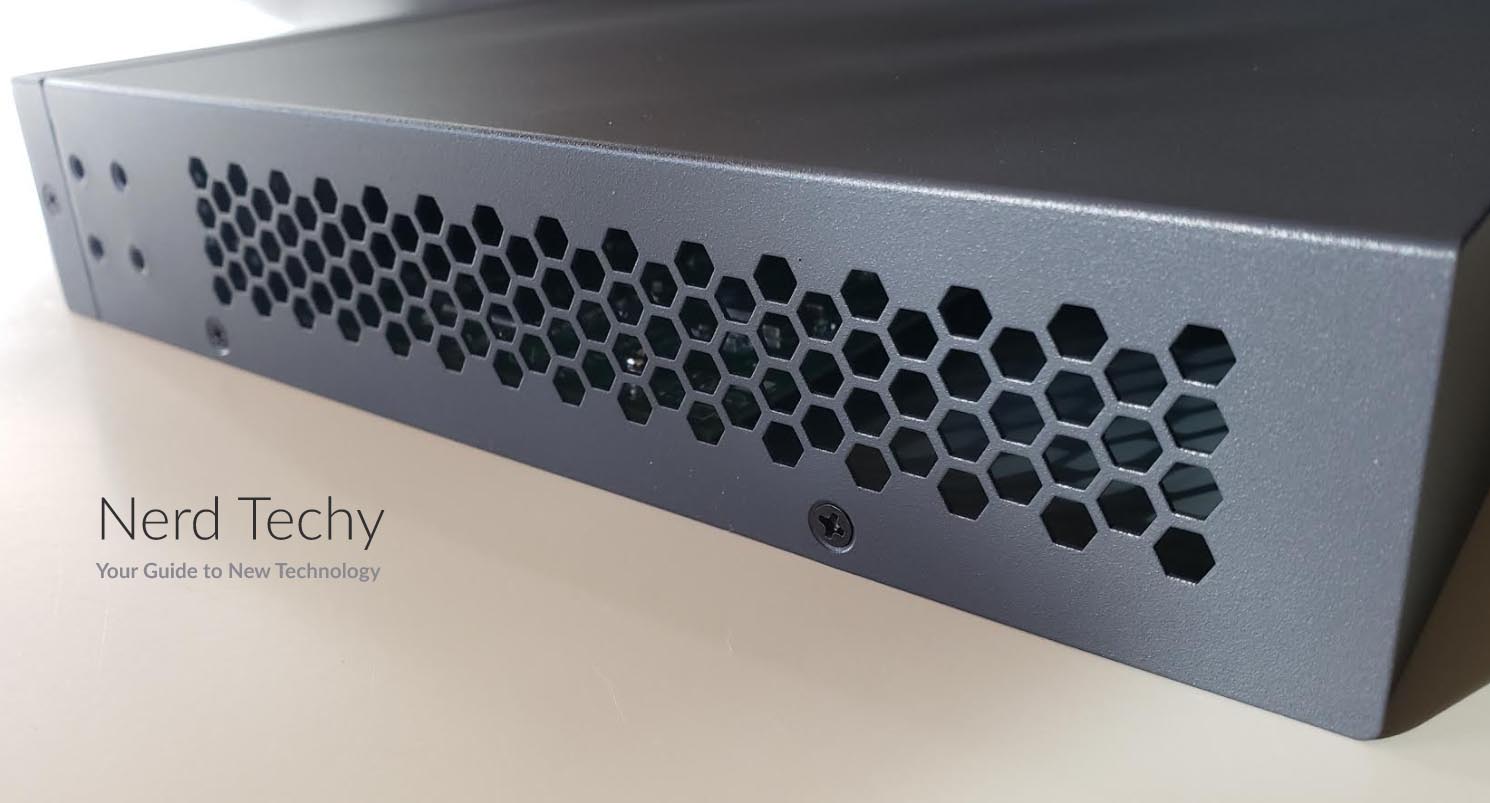 The EnGenius Cloud ECS1112FP is designed to work in tandem with EnGenius Cloud management software. This software is license-free, so anyone can use it without paying a subscription or other fee. EnGenius guarantees 99.99 percent uptime, and will support up to 100,000 devices for each account. This means connected devices, not just your switch. So if you have 100 switches with 1,000 connected devices each, you’ll hit the limit. Unless you’re a major corporation, you’re never going to need this much capacity. The downside is obvious. With cloud-based management, you need to install an aftermarket controller for local management. 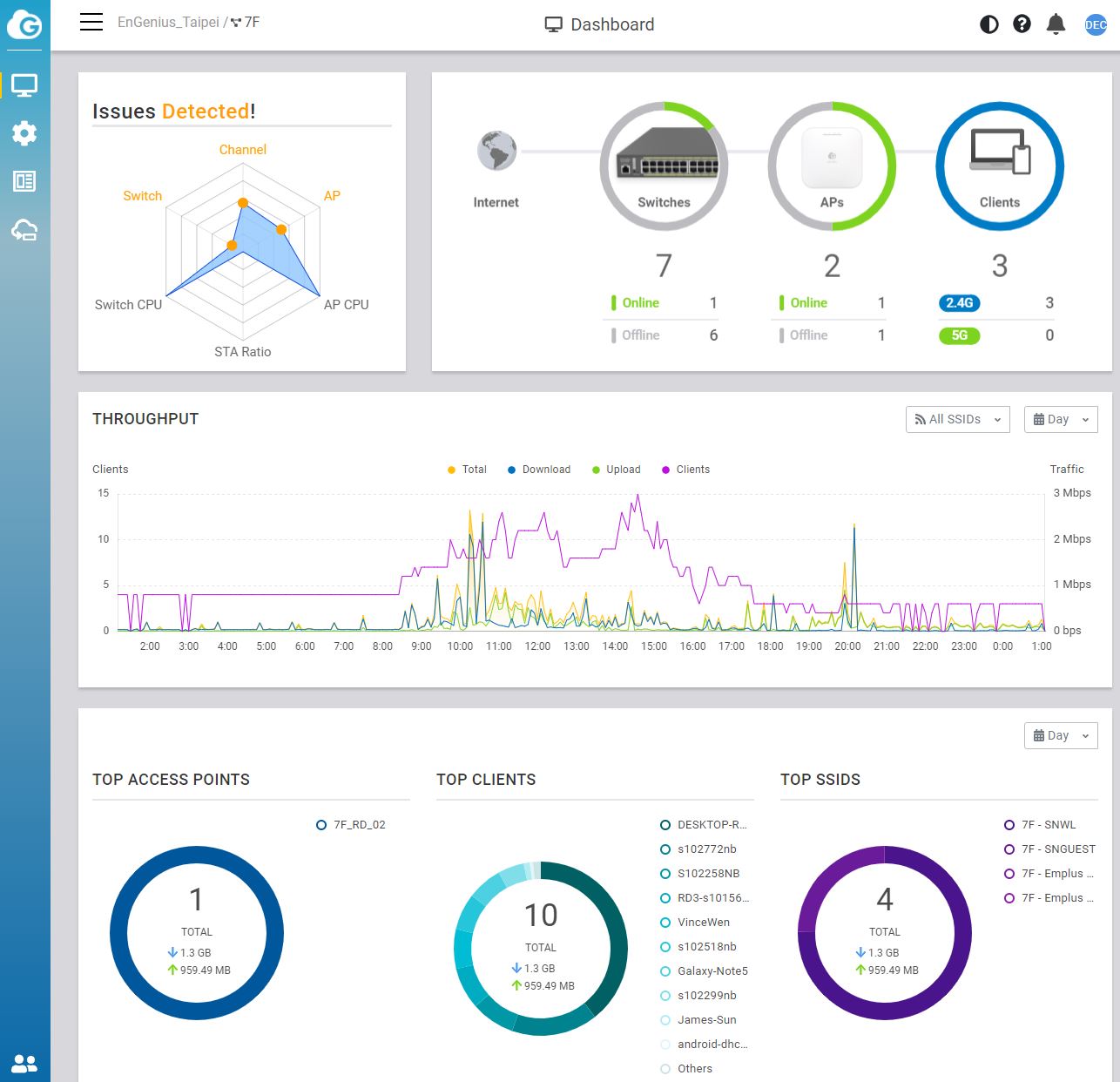 That said, the EnGenius Cloud platform offers several benefits that we appreciated. For one thing, it uses two-factor authentication, so it’s virtually unhackable. Next, it allows you to see a visual, top-down view of your LAN. This shows you the paths between all connected devices, and can help you troubleshoot issues. You can track roaming access across wireless access points in this fashion. This gives you to know when you’re leaving one access point’s range and into another’s. Moreover, you can view the apps that are being used to connect to the web. This gives you a view of how your network’s traffic is being allocated. It also lets you pinpoint any apps that are hogging bandwidth. 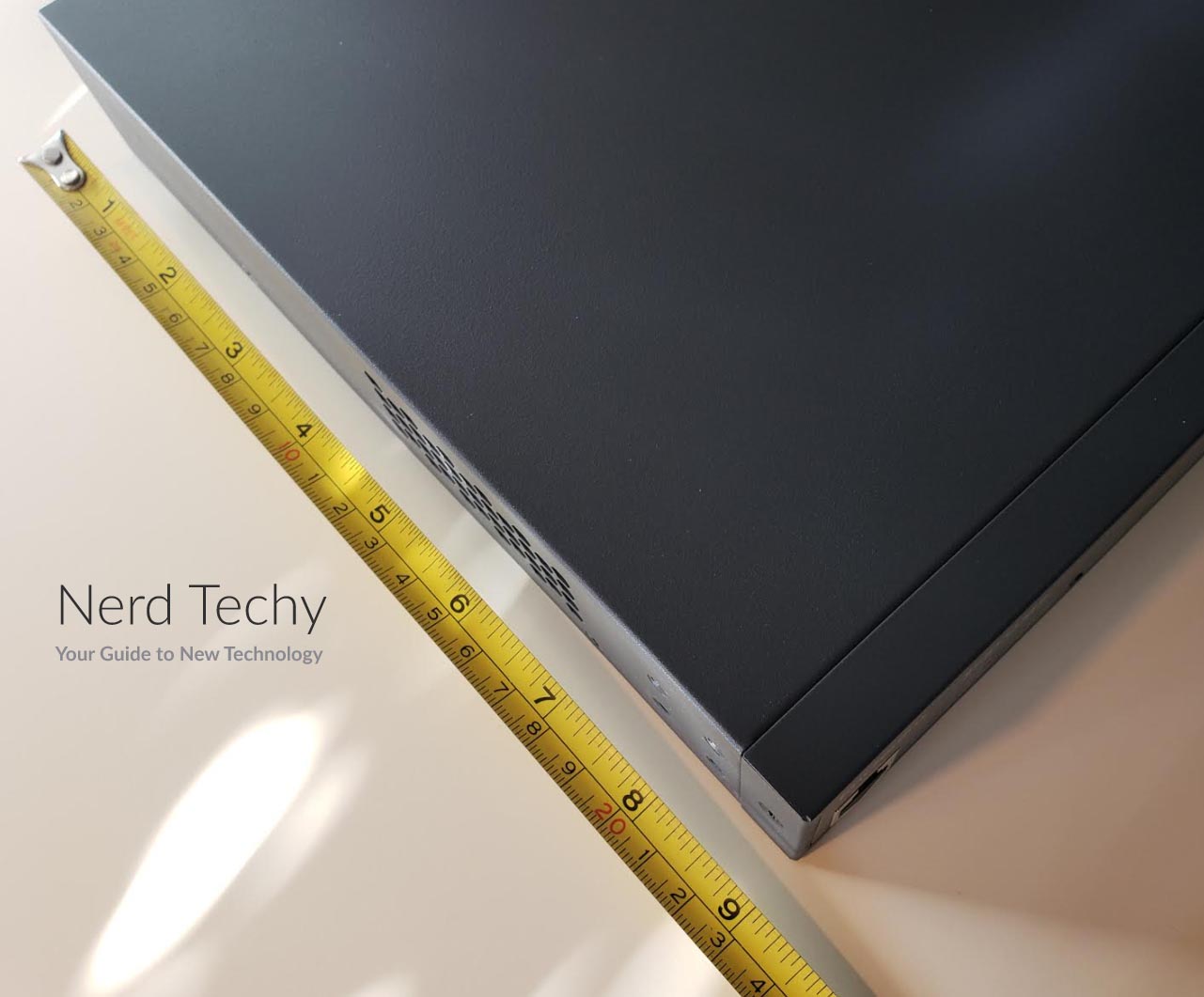 As you can see, the EnGenius Cloud ECS1112FP is the complete package. It’s not cheap, but it offers more power and data capacity than you’ll ever need. That’s not an exaggeration. You couldn’t hit a bottleneck with the ECS1112FP, even if you tried. That’s a huge benefit for any network manager, since it’s one less potential headache to worry about down the line. Furthermore, the high maximum wattage allows you to use any kind of PoE device you want. You won’t have to limit what kind of security camera or access point you use. 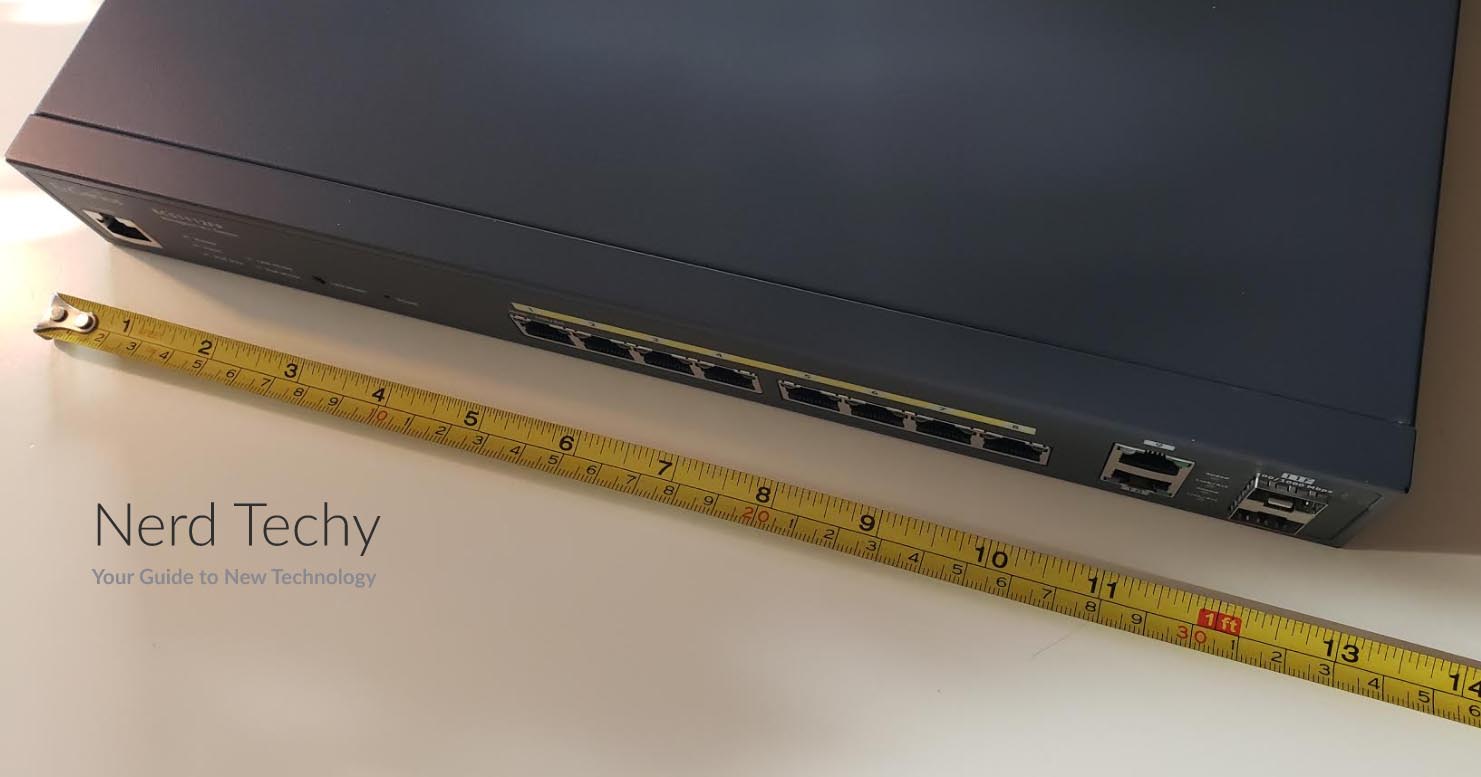 Our only real gripe was a minor one; the only controls are online. If you want local, offline control, you need to buy a third-party controller. That said, this is more or less standard for Ethernet switches. Not only that, but EnGenius provides their cloud platform free of charge. That’s a huge added value even if it isn’t a tangible, physical product.