Just ask any gaming enthusiast who’s used a mechanical keyboard before. You’ll be hard pressed to find anyone who’s gone mechanical and then returned to a rubber dome keyboard. Mechanical switches simply offer a superior tactile performance that isn’t offered with any other type of keyboard. There is a solid “click” that you feel when every individual key is actuated. This seemingly small difference has a huge impact on your muscle memory.

Most users report that they type more accurately, at higher speeds, with less errors. However, the one major downfall to most mechanical keyboards is their price. With some brand-name models costing upwards of $250, this kind of premium keyboard is often out of reach for most consumers. But with the Hermes RGB Mechanical Keyboard, Gamdias appears to offer a premium product at a rock bottom price. Can this keyboard compete with the high end models, or does it fall on its face? Let’s take a closer look and find out. 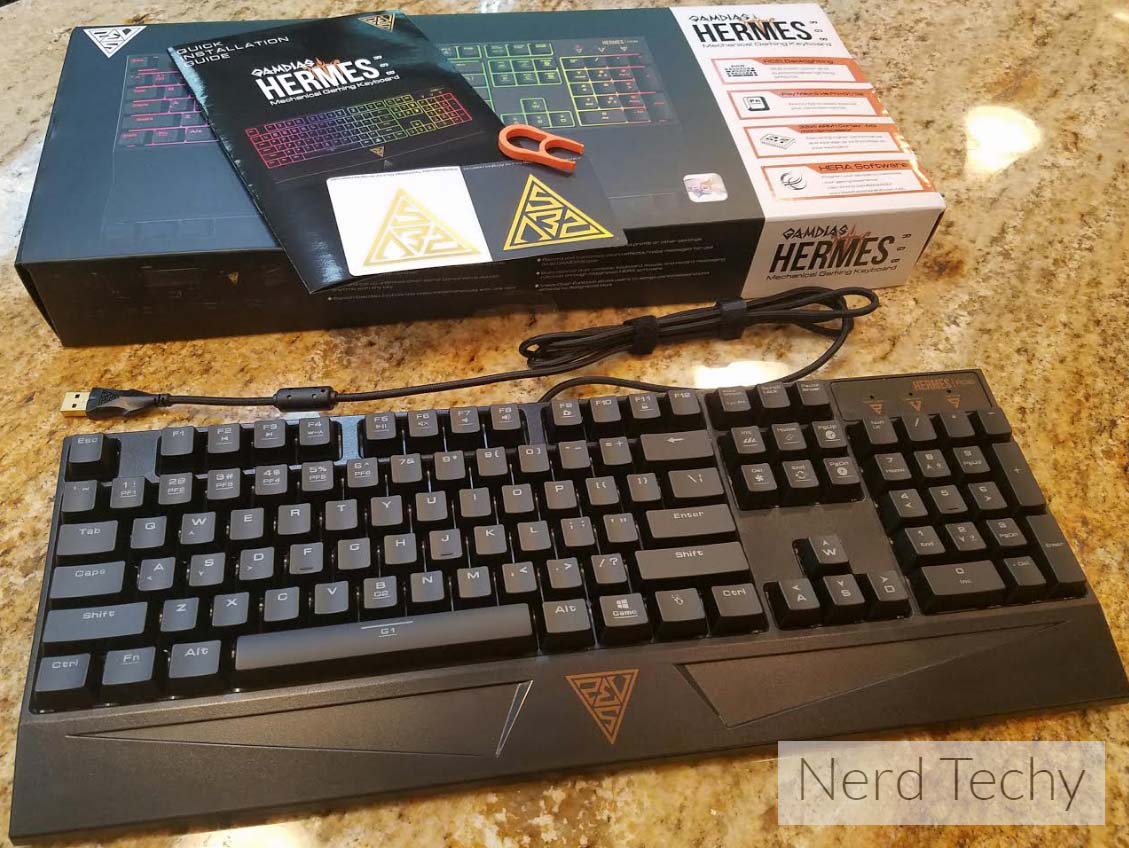 The Gamdias Hermes is certainly one striking looking keyboard. From the sharp, beveled edges of the palm rest to the vibrant glow from beneath the keys, it’s certainly something to be visually enjoyed. It manages to take the aggressive “in your face” look that’s craved by so many gamers and combines it with a hint of elegance. The gold branding has a distinct luxury feel, and is tastefully designed. But of course a keyboard is only as good as its performance, so we’ll have to go hands-on to find out if this cool looking keyboard is worth it or not. 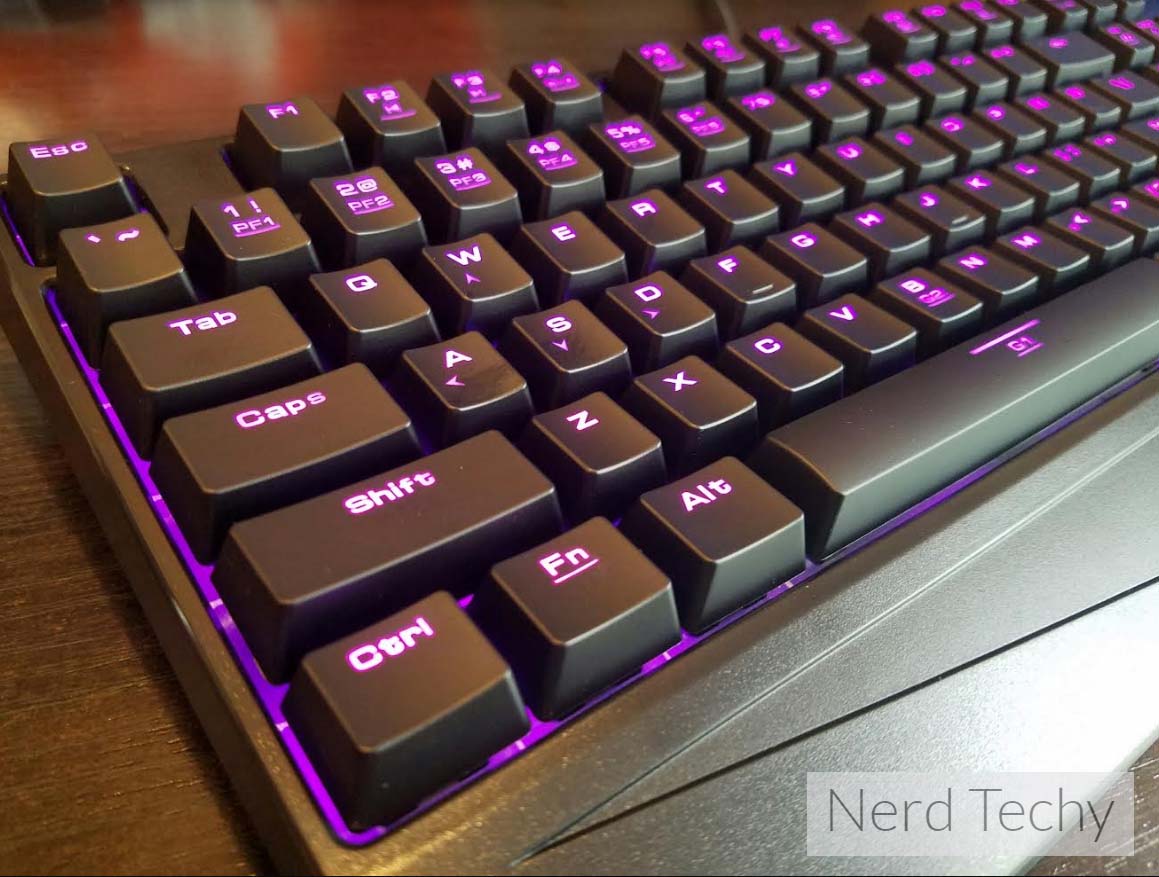 With a high end keyboard, users expect a little more than you’d get with the freebie that came with your computer. And Gamdias delivers it. The keyboard is highly customizable. Everything from the button layout to special key combos can be programmed using the bundled software. This lets you change the meaning of any specific button or combination of buttons depending on your needs. You can do this on an application basis, or at all times in the operating system. 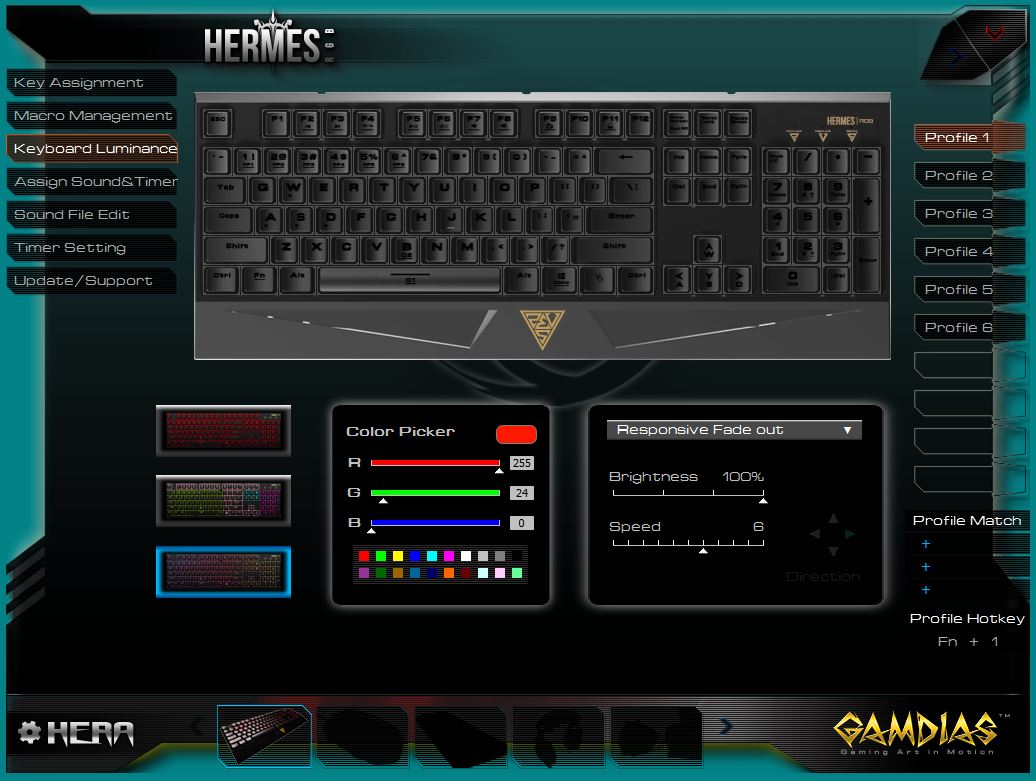 Sometimes, different games might give you different play styles. Others, you may have multiple users sharing the same keyboard. This is made easy with 6 built in player profiles that can be selected with a simple click of a button in your taskbar. This lets you switch, on the fly, to any new command layout you feel is more comfortable.

Next, you’ve got two programmable macro keys. What this does is let you take a specific combination of buttons and assign them to a separate key. This holds both timing and combination data, so it’s much more advanced than just the standard profile. The macro keys are located on the G and the space bar. You actuate them by holding down the FN key (located next to the left control) and then the macro key of choice. The first time you press it, you’ll record a macro. You simply use the keyboard as you normally would, then press FN and the macro key again to end recording.

From this point on, anytime you use the FN and macro key, it will replay your macro in real time. This feature is incredibly handy for any game that has a lot of grinding, or for lining up attack combos. However, the key combo is a little awkward when you’re not used to it, so it might not be ideal for precise, time sensitive motions. 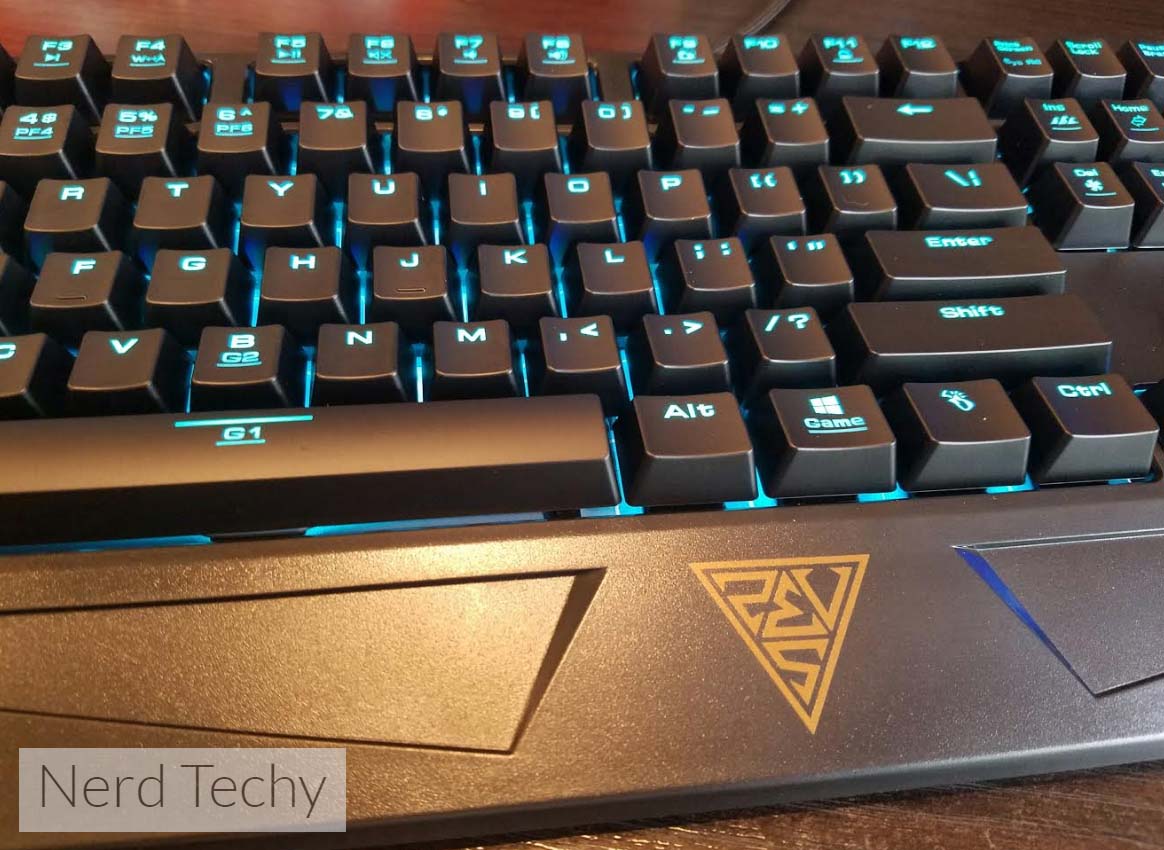 For many people, the RGB lighting will be a major selling point. They keyboard is pretty subdued in looks, so the lighting can turn it into a prominent imposing force on your desk, if you’d like. In terms of functionality, the most powerful feature is the “Zones” option. This allows you to pick certain key groups and light them up the same color. For example, you might want your WASD keys illuminated one way. You could pick and choose other areas depending on what action they performed. This feature is incredibly useful with non-gaming software as well. Photo editing, video editing, and music production programs are all very heavy on key combinations, and zone lighting makes it easier to use.

You’ve also got the freestyle mode, where you can set every key individually. This gives you a lot more power and control over the look of your keyboard, but certainly takes a little more time to set up. 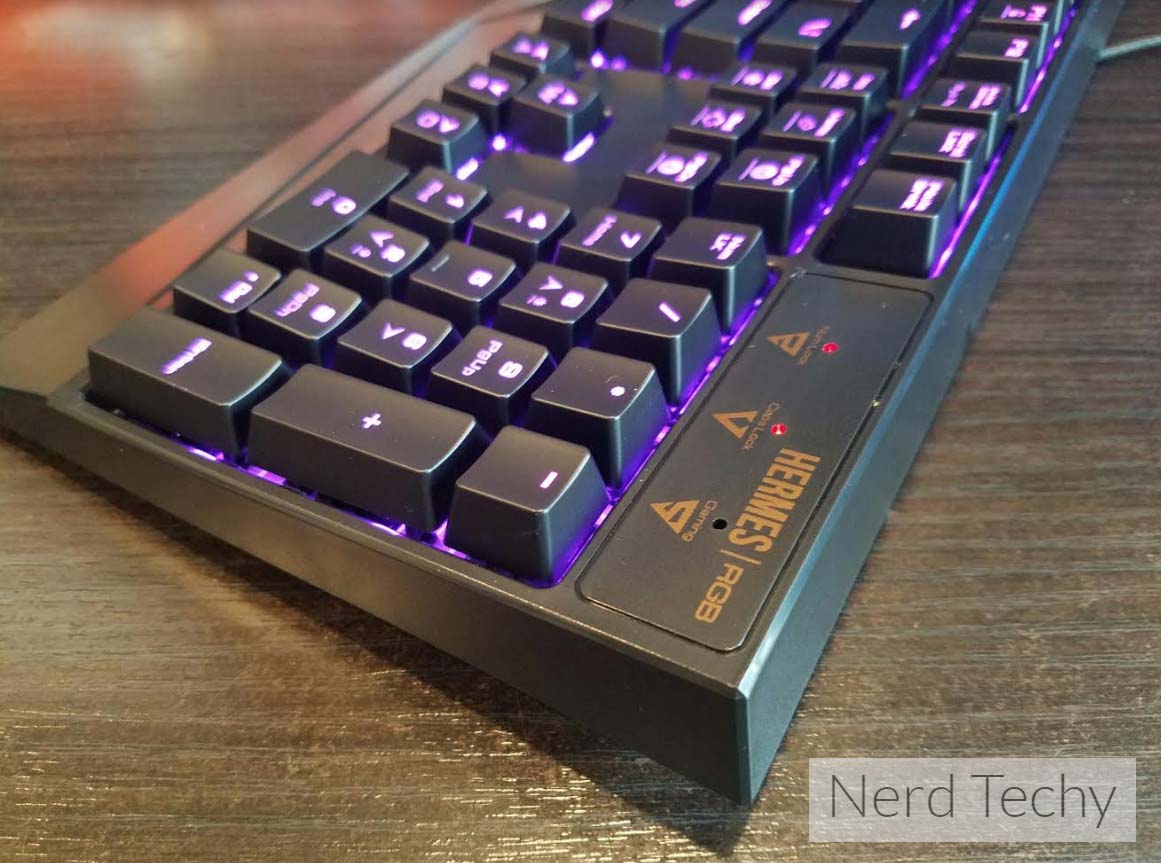 Finally, you’ve got the effects. These are for people who just want their keyboard to look cool, and don’t need any specific functionality. There are all kinds of affects you can choose from. Breathing, color cycle, and fixed color are all calm visuals that won’t distract you from your gaming. For a more impactful look, try out the star effect, flash, or key-press. In total there’s 13 different effects for you to choose from, so there’s sure to be something in there for everyone.

No matter which you choose, you can also change the brightness on the fly directly from the keyboard. You’ve got three brightness levels – dim, medium, and bright. And of course off. We found these to be pretty well suited for any work environment, and being easy to access was helpful. 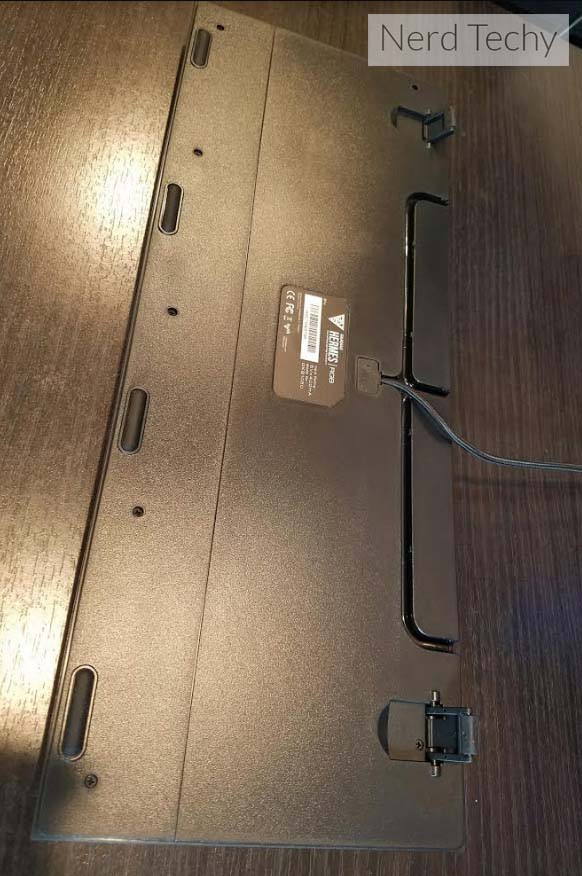 How did it feel to use the keyboard? In short, it’s an absolute dream. However, it might not be what everyone is looking for. But to understand the performance, we’re first going to have to explain how mechanical keyboards are built.

Traditional keyboards have a small rubber dome under each keycap. When the key is depressed, the dome collapses allowing contact to be made. This provides a very “smushy” feeling actuation. Mechanical keyboards, on the other hand, have a physical mechanism. There are two components to this, a spring and the switch itself. You depress the key against the spring, eventually tripping the switch that causes the key to actuate. There are a few factors when deciding which type of switch to use. Linearity defines whether the required force is equal all the way down the keys path of motion. Force, of course, is the amount of pressure required to actuate the switch. And of course sound, or “clickyness” as it is often referred to. 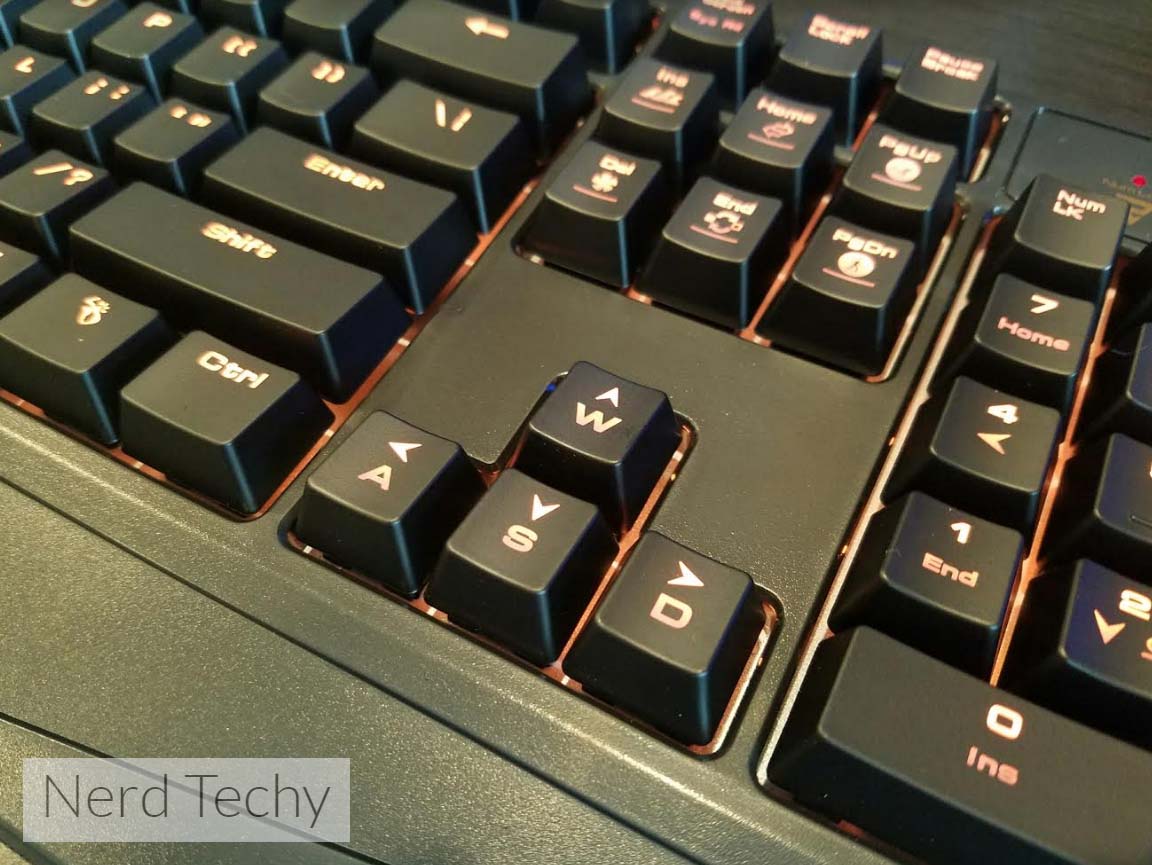 Red switches are linear in response, and have a very light spring. This makes them easy to depress, quicker to return, and the sound is heavily dampened. The tactile effect is not as strong, but the fast response time is favored by gamers.

Blue switches, on the other hand, are the most tactile switches on the market. Each key-press releases a firm “click” and can easily be felt in each finger. Many people consider blue switches to be the best, especially for typists. These switches give you the maximum benefit of the mechanical platform, at the expense of being a bit louder.

This keyboard uses blue switches. This is a bit uncommon for a gaming product. Blue switches don’t offer the fast multi-tap response you’d get with a red. But most people feel they are much better. This very review is being written on a keyboard with blue switches, and we wouldn’t recommend anything else. But for gaming, you may want to consider a red model if you’re concerned about having to rapidly press the same button as fast as possible.

The next issue is the off-brand switches. A common belief is that the only switches to buy are the Cherry MX series. This particular keyboard uses 3rd party switches. In our opinion, the difference is negligible. We’ve come across some pretty terrible “hybrid mechanical” switches before that don’t live up to the hype, but we were not able to tell any difference between these and the MX switches. They’re rated for a 50 million actuation life cycle, so you will surely be able to get your monies worth. 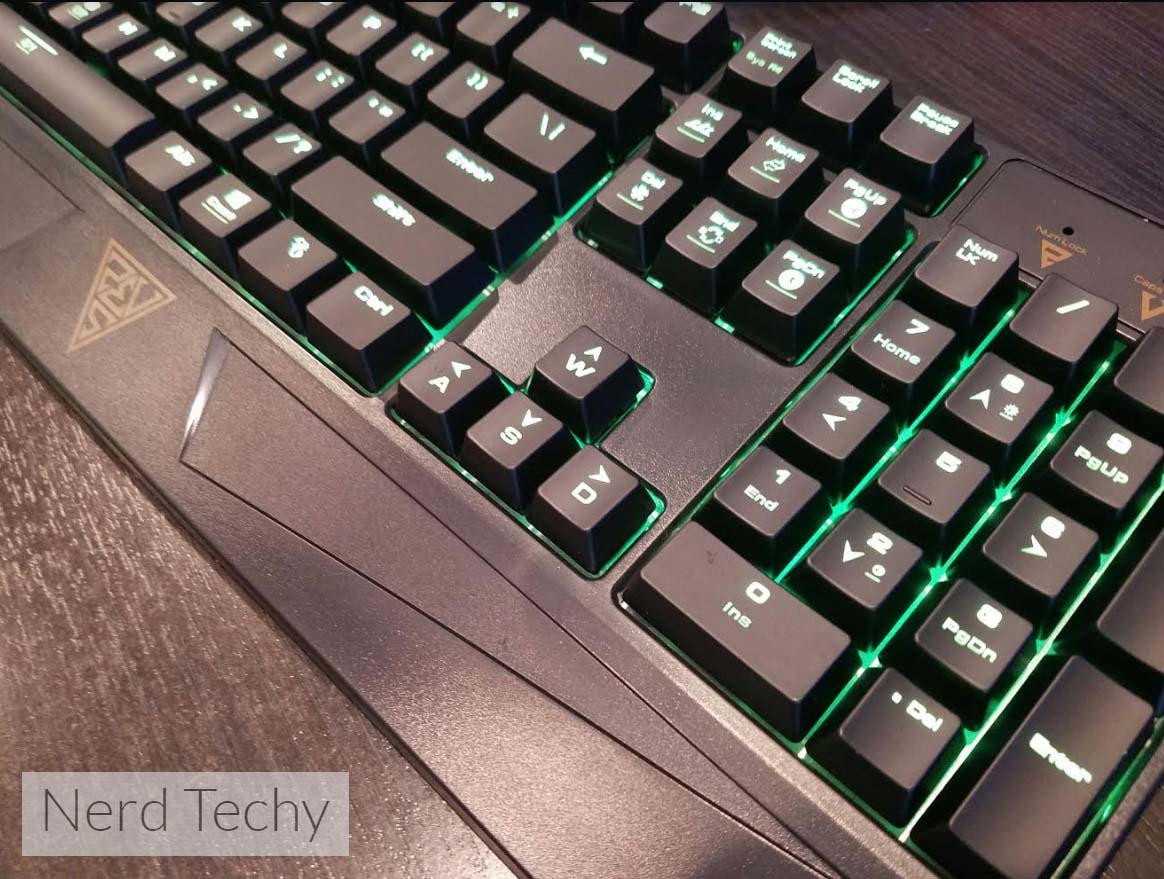 In our opinion, the Gamdias Hermes RGB Mechanical Keyboard is definitely a great buy and overall a very nice choice. Any users that are going to be doing a combination of typing and gaming will really appreciate the inclusion of blue switches, something not often found in gaming oriented keyboards. The lighting and macro features are also a great inclusion, and hard to get at this price point.

Some users may prefer the red switches. And if you’re a heavy gamer that doesn’t use their computer for anything else, that’s understandable. We recommend that you check out the Kingston HyperX Alloy FPS. It’s missing the lighting and macros feature, but it’s the next cheapest way to get red switches.

But for everyone else, we’d strongly recommend that you give the blue switches a try. This keyboard is so affordable that you’re not putting a lot of money on the line, and outside of the gaming community these switches are highly regarded as the best on the market.