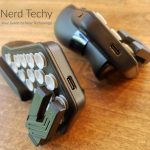 Tablet gaming is perhaps one of the most interesting developments to come around in gaming this decade. Developers have been making handheld systems since the very first Game Boy. But handheld consoles have traditionally had a couple of limitations. First and foremost, they didn’t have the processing power to play the same games as full-sized consoles or computers. This meant that many “hardcore” gamers eschewed handheld systems altogether. Why play a game that’s out of date or underpowered when you can have the latest and greatest? The other reason many handheld systems failed is that they were an extra expense. You were paying for something to play games on the road, and literally nothing else.

Tablets have eliminated both of those concerns. To begin with, their processing power is close enough to a full-sized system to play many games. For example, Fortnite is one of the most popular games around, but the graphics are very tablet-friendly. And even where they’re not, cloud-based gaming is picking up the slack. With a tablet and an internet connection, you can play almost anything you can play on PC or console. Not only that, but tablets are versatile. The same device you use for gaming can also be used for email, web browsing, and paying the bills. This gives them a much broader appeal than a dedicated handheld gaming system.

But one downside of a tablet is that they’re not as easy to control. Instead of a controller or a mouse and keyboard, you’re tapping furiously at on-screen buttons. If you want to be truly competitive, you need a controller that works with your tablet. That’s where the GameSir F7 Claw comes in. This is a two-part controller that literally clamps onto your tablet, with two triggers on each side. If that’s not enough, it also has a turbo mode for shooters and quick time events. But does it actually work as well as we’d like? To find out, we had to put it to the test. Now, we’ll tell you everything we’ve learned about this innovative tablet controller. Let’s get started! 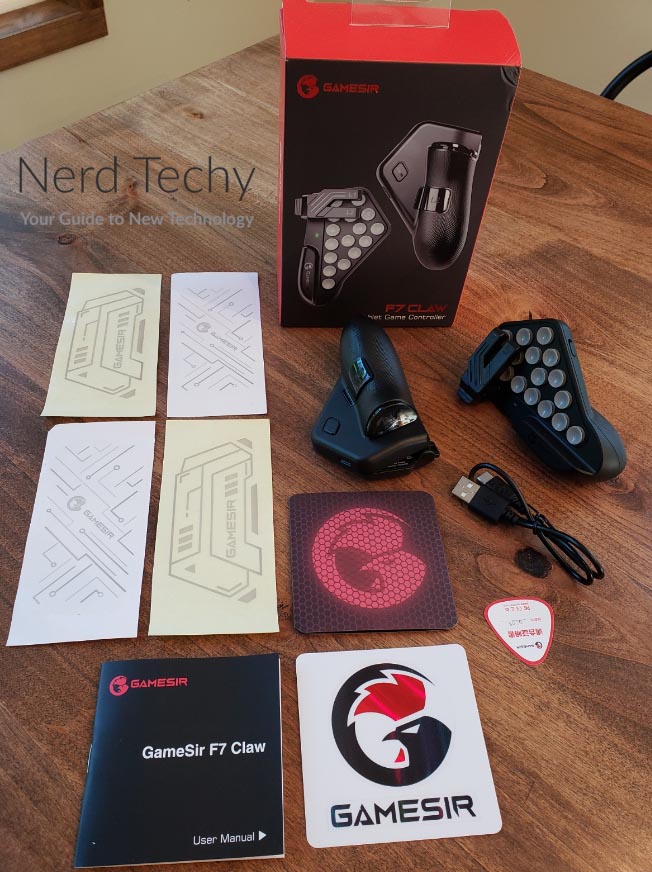 The GameSir F7 Claw consists of two separate clamps that attach separately to the sides of your tablet. Each half sports a flat platform, which is covered in grey suction cups. You put your tablet inside and press down, and the suction cups grab on. There’s not much else to it. This design makes sense, since it allows you to fit the Claw on pretty much any tablet. It will work on Androids and iPads, whether they’re large or small. 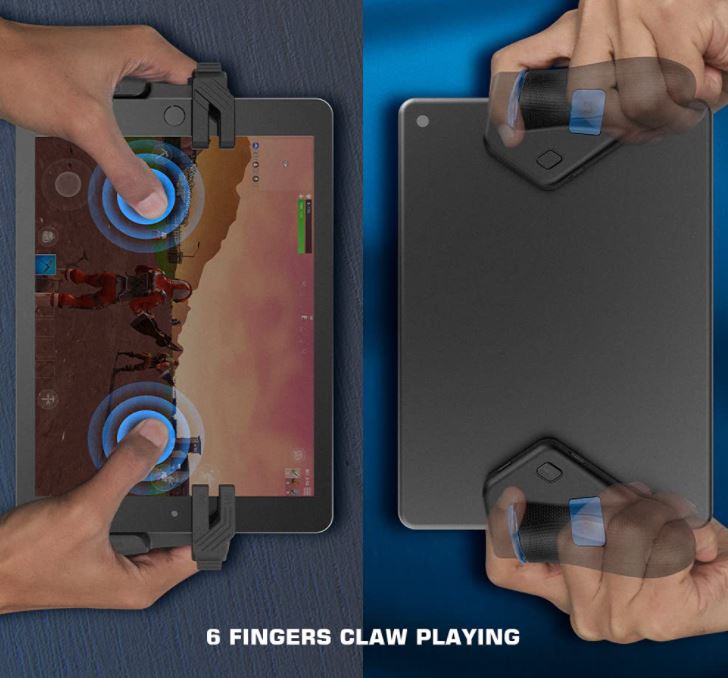 The two controller halves are made of black ABS plastic, and feel sturdy enough to take a beating. We’re not saying they’re 100% shock-proof. But you should be able to drop them as you would an ordinary console controller. At the very least, they’re more durable than your tablet. The tops are smooth, but the sides and bottoms are curved to fit your hands, much like a normal console controller. The bottom is textured, which makes it easier to grip as well as providing some sweat-resistance.

Control is provided by a pair of flippers that extend over the top of your tablet. These flippers are controlled by a pair of triggers on the bottom of each controller half. Basically, you’re adding four physical buttons to your existing tablet setup. The triggers are responsive and chunky, but they don’t have the same kind of travel as you’re likely expecting. This is because they’re electronically activated, which we’ll talk about in a second. On the bottom of each grip, you’ll also find a power switch, alongside a turbo button. There’s also a USB Type-C charging port for plugging in.

One thing you may not have noticed about the F7 Claw is that it isn’t terribly versatile. It’s usable with tablets, and that’s about it. If you need a controller that works with multiple systems, consider the GameSir G4 Pro. It’s a separate Bluetooth controller with a built-in smartphone bracket. It has a more traditional layout, but requires a Bluetooth connection, and doesn’t have as much battery life. 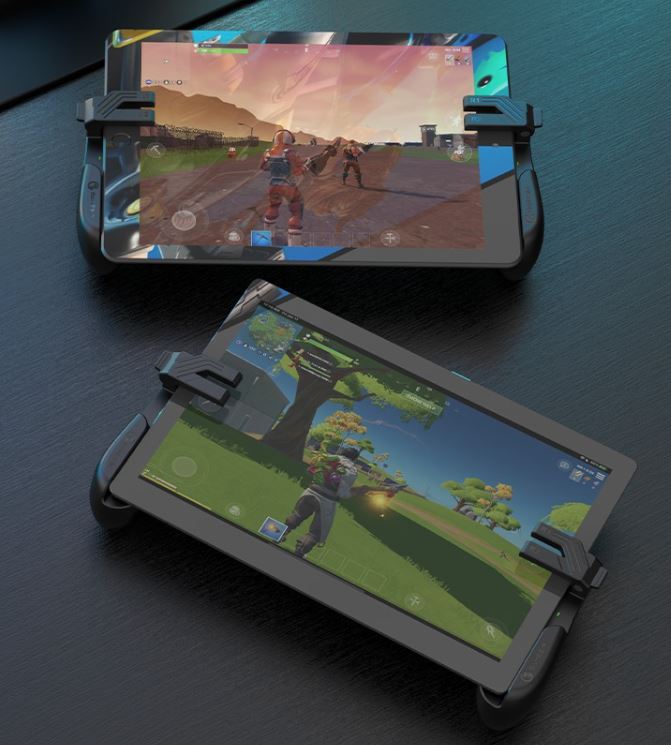 As we mentioned, the GameSir F7 Claw works by tapping on your screen. However, the triggers aren’t strictly mechanical. They’re attached to small motors, which in turn operate the flippers. This results in less finger fatigue than it would if you were manually operating mechanical flippers. However, it also requires an internal battery to operate the motors. Thankfully, the F7 Claw’s battery is exceptionally powerful. It works for up to 120 hours, or five straight days. That’s enough to take a short vacation without even bringing your charger. If that’s not enough, you also get up to 200 days’ standby time. Put it in your drawer for a few months, take it out, and you’ll be able to start gaming immediately. 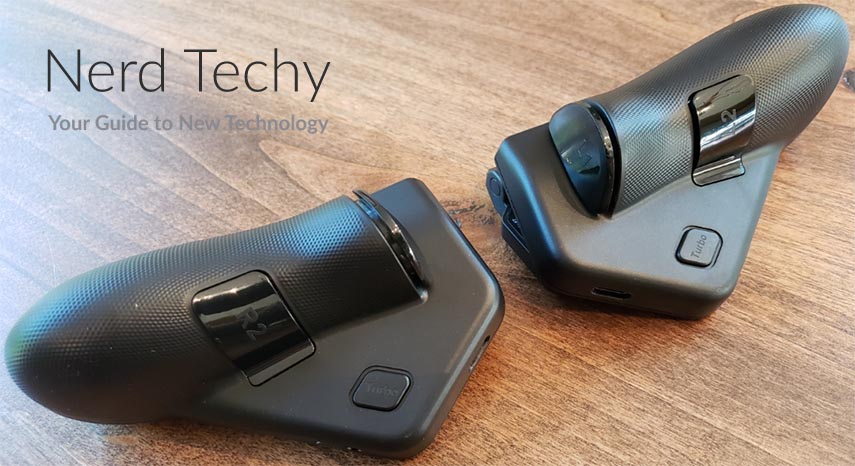 This battery life is only a maximum, though. In practice, the more aggressively you game, the faster the batteries will drain. The effect becomes more pronounced when you’re using the turbo or record functions, which we’ll discuss shortly. Even so, you’re still looking at well over 24 hours of battery life under the worst circumstances. Charging takes only two hours via USB Type-C. Our only minor complaint is that you’ll need to buy a second cable if you want to charge both grips at once.

Because this is a physical controller, you’ll probably need to do some tinkering to get the controls set up. First, make sure the grips are in a comfortable position on the screen. Try holding your tablet in a few different positions, and adjust the grips as needed until you’re happy. Then, when you open your game, go to the settings and move the virtual buttons as needed. Place them under the controller flippers, and run a quick test to make sure the triggers work as expected. Keep in mind that you’ll be able to position two buttons per side under the flippers. Most players use the most common controls, such as grenades and guns, but it will vary depending on your game. 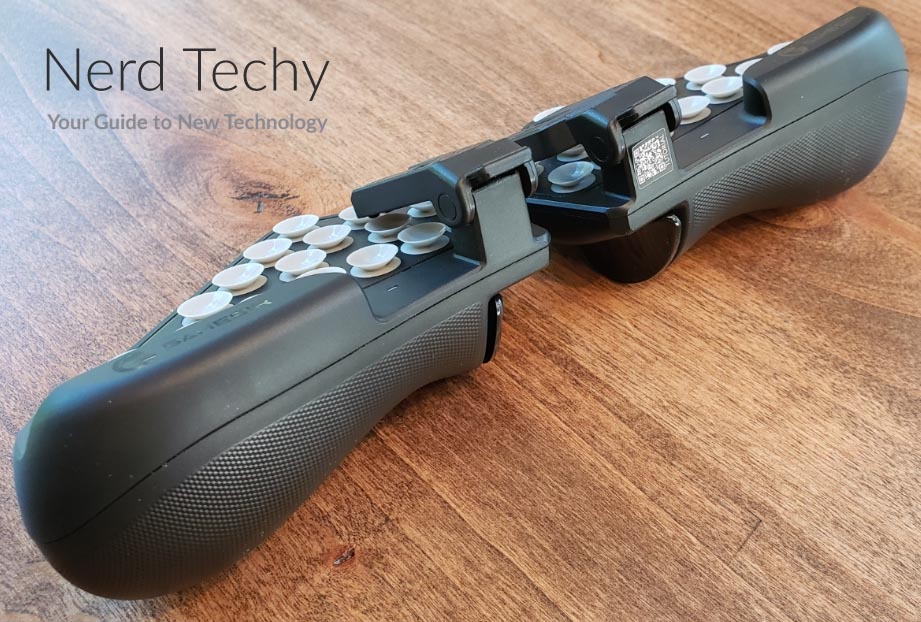 One thing we liked about this design is that you can use more than four buttons if need be. Because of the way you hold the grips, additional buttons can simply be placed near your thumbs. This allows you to access other controls with a grip that’s similar to the way you’d hold a traditional controller.

The main advantage of the physical control design is that it works with touchscreen games out of the box. You don’t have to mess with a Bluetooth connection and remapping all your controls. The downside is that it only works with touchscreen games. For many screens, like smartphones, a better choice is to use a specialized smartphone controller. The GameSir T4 Pro has a built-in smartphone clamp, and many more buttons than the F7 Claw. It can even be paired with a PC via Bluetooth. On the downside, it won’t work with tablets, and it’s incompatible with consoles as well. 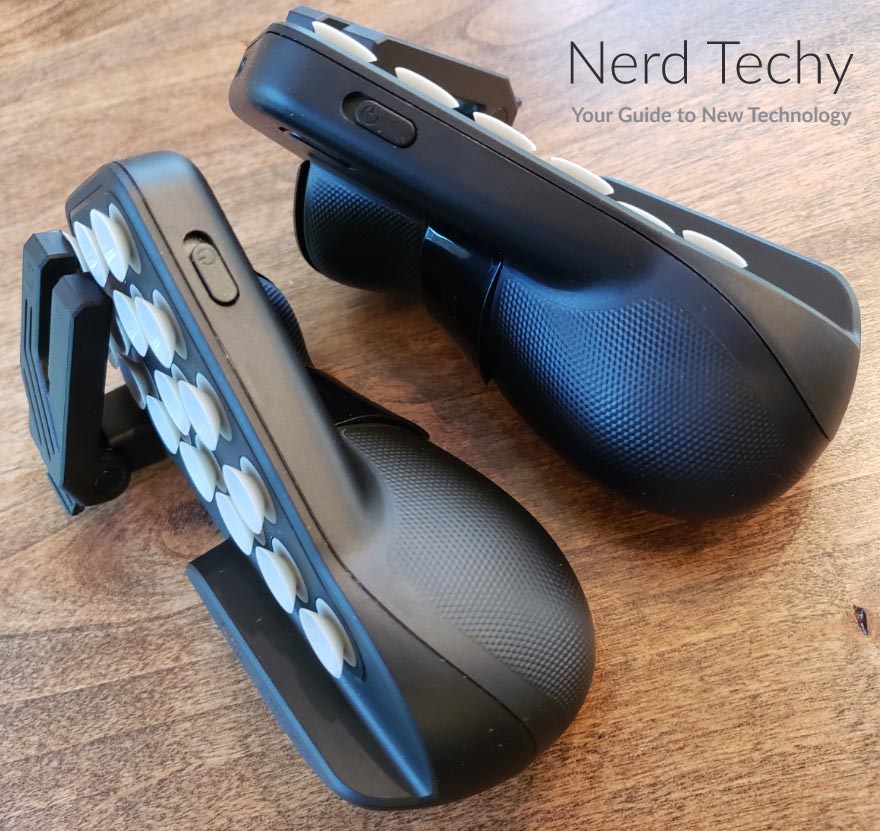 Earlier, we mentioned that there are turbo buttons and power switches on both sides. What are these for? The power switches might seem obvious. They’re to help you save battery when you’re not using the controller! However, they can also be used to independently turn off one side. Many games are simple, and you may only need one or two buttons. In that case, you can use only one side of the controller. Then you can leave the other one off as a “dumb” grip, and you’ll only have to charge one battery.

The turbo buttons are what you might expect. They’re used to turn on turbo mode, and cause multiple button presses with one pull of the trigger. There are three different modes: three shot, six shot, and nine shot mode. These refer to how many times the button will actuate when you pull the trigger. Generally, you’ll use the three shot mode for shooters, and faster modes for other games. That said, you can use it however you want. Pressing and holding the button will put the grip in three shot mode. Holding it longer will put you in six shot mode, and holding it even longer will put you in nine-shot mode. Pressing and holding the button again will turn turbo mode off. 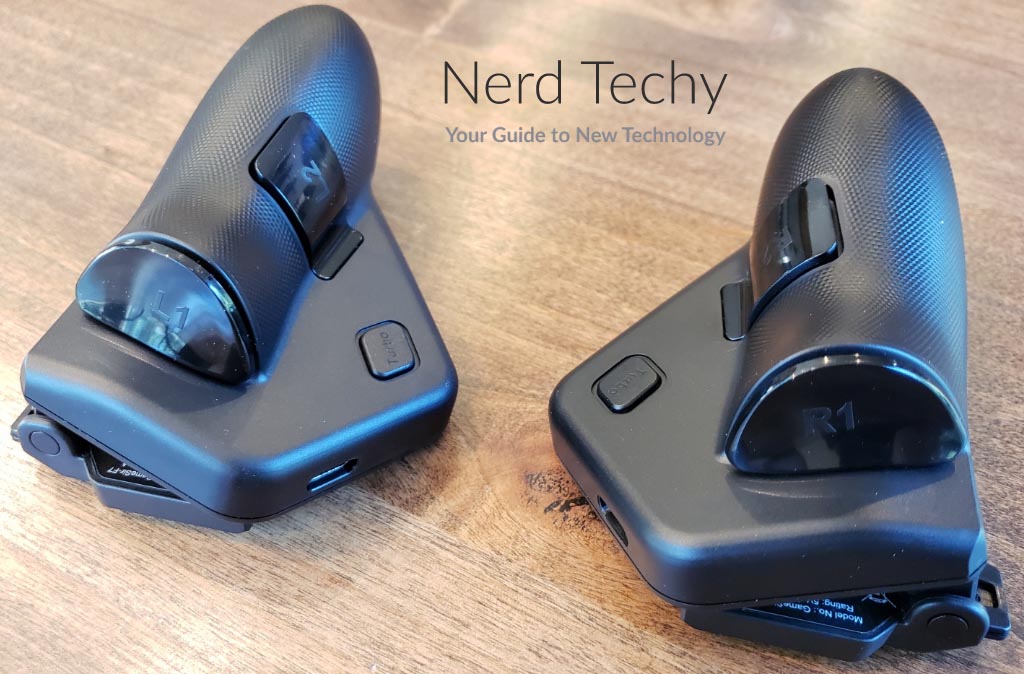 Like the power switches, the turbo buttons are also separate for each side. So, for example, you can have your rifle in three shot mode, but your jump button on normal mode. It’s also easy to see your status, thanks to a set of buttons on the tops of the grips. Green indicates three shot mode, orange indicates six shot mode, and red indicates nine shot mode. When the light is off, you’re in normal, single shot mode.

You can also use the power and turbo buttons to program button combos. This is neat in practice, and it has some niche applications. That said, like all the other functions, it works on a per-side basis. So you can only program a two-button combo, and only for two buttons on the same side. It’s handy if you need precise timing on those two buttons, but that’s all it’s really good for. 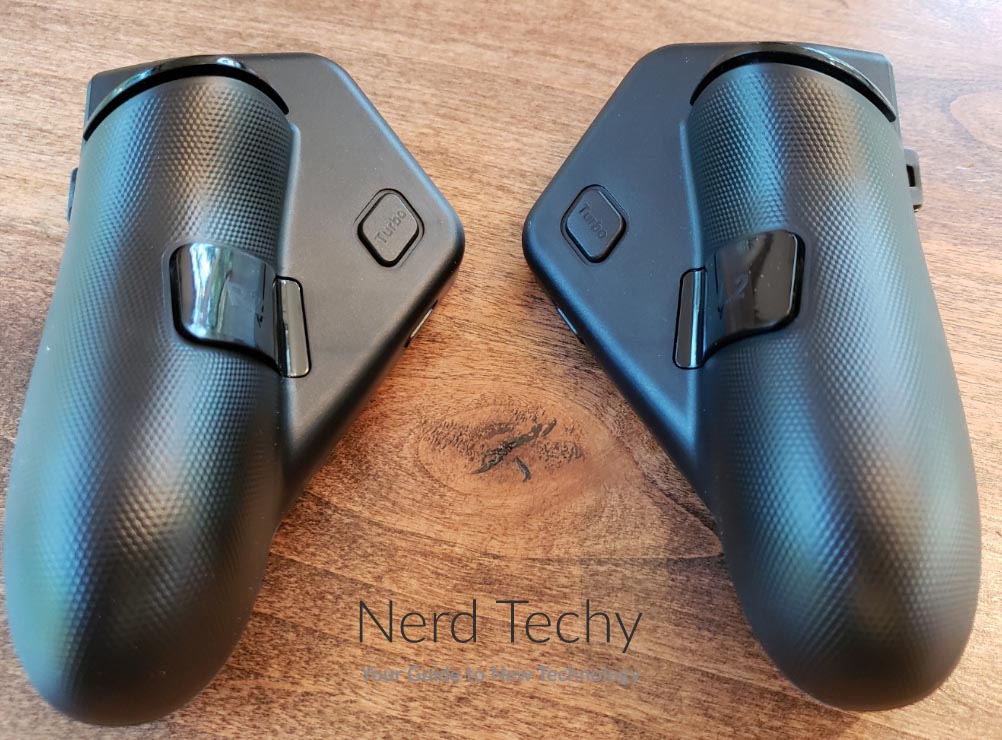 If you have a phone with USB Type-C, the GameSir X2 is an excellent choice. It’s a dedicated smartphone controller that clamps over your phone and puts an array of standard buttons at your fingertips. On the downside, it’s too small for most tablets.

The GameSir F7 Claw is an effective, innovative tablet controller. It’s easy to use, and it’s well-engineered enough to take a beating. The turbo function is nifty, and we also appreciated the separate controls for each side. Not only that, but this controller is compatible with literally any tablet. If it’s flat and it has a touchscreen, the F7 Claw will work. That said, without Bluetooth, it’s only compatible with tablets. Console and PC players will need to look elsewhere.