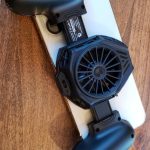 If you had to name the most popular game platform of this generation, what would you guess? You might guess the PlayStation 5. After all, the PlayStation 4 was the most popular console last generation. You might guess the Nintendo Switch, with its unique capabilities and broad audience base. You might even guess the PC, with its easy upgradability and near-unlimited library. But if you guessed any of those things, you’d be wrong. The most popular game platform in the world is the smartphone. Think about it. Pretty much everybody owns one. If you’ve played one smartphone game in the past year, you too are a mobile gamer!

Smartphones might be widely available, but they’re not primarily intended as a gaming platform. They’re made for phone calls, texting, and web browsing. When you’re doing those things, you’re either using a QWERTY keyboard or passive scrolling on the screen. When you’re gaming, you have to constantly tap different parts of the screen. At the very least, it can get tiring. That’s why companies make products like tablet grips.

Another potential issue with smartphones is overheating. They’re not designed to run at maximum capacity all the time. And unlike a computer or game console, the cooling is only passive. There are no fans to speed up and keep your system from getting too hot. If you’re not careful, you’ll glitch your phone, and you’ll have to wait for it to cool down.

The GameSir F8 Pro Snowgon Mobile Cooling Grip is designed to solve both of these problems. First, it’s designed as an ergonomic grip so your phone feels more like a console controller. Secondly, it has a built-in semiconductor refrigerator that directly cools your phone. But how well does it actually perform those functions? To find out, we’ll need to take a closer look at the F8 Pro. We’ll go over the basic design and the ergonomics. We’ll touch on how the cooling system works and what you can expect. We’ll also touch on a couple of notable bonus features. Once that’s done, we’ll be ready to render our verdict. Let’s get started! 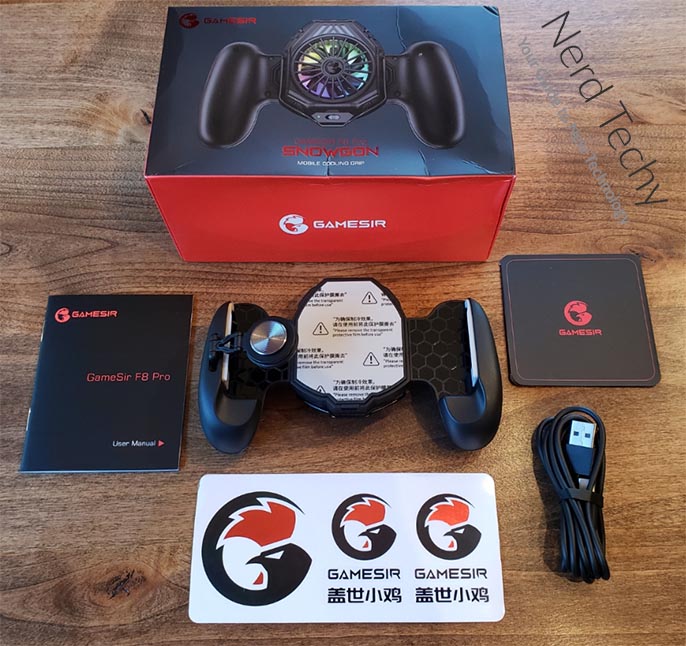 The GameSir F8 Pro Snowgon Mobile Cooling Grip consists of a grip with a cooler in the center. The grip itself consists of a pair of matte plastic handgrips that are easy to hold onto. They make your phone considerably beefier, and give it a smooth, contoured feel. We also liked the fact that there’s a matte finish, so it won’t collect fingerprints easily. The cooling unit is mounted in between the grips, on the back of a flat frame. It’s roughly hexagonal, with a fan visible in the middle and a power switch underneath. 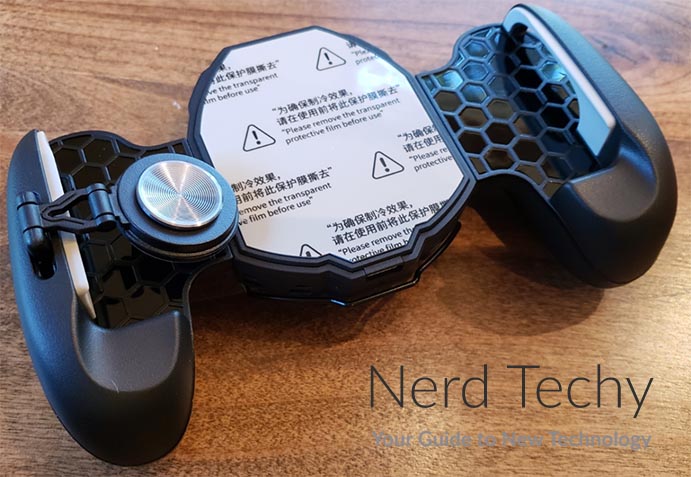 Installing the grip is fairly easy. The two sides are spring loaded, and pull a part with a gentle tug. You position your phone on the inside of the grip and let the sides clamp down. In all, the grip can accommodate phones between 3.93 and 6.81 inches in length. In Metric, that’s 170 to 173mm. One nice thing about this grip is that unlike some controller grips, it doesn’t need to plug into your phone. The result is that you can fit a wider variety of phones, since plug orientation is not an issue. Similarly, you won’t have to worry about incompatibility with Android or iPhones. Whether your phone has USB Type-C, Micro USB, or Lightning, the grip will work just fine. And at only 5.1 ounces, it’s very comfortable to hold. 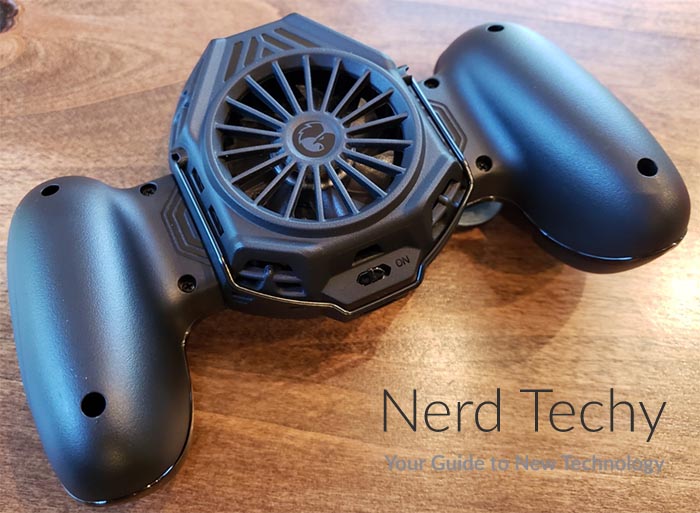 One major downside of the F8 Pro’s design is that there’s no built-in battery. As a result, the cooling function will only work if it’s physically plugged in. There’s a Type-C cord included in the kit, but you’ll need to provide your own AC adapter. Alternatively, you can plug into a power bank if you’re on the road. This can get inconvenient if you’re already counting on your power bank to charge your phone, though. Another downside is that this is yet another device that needs to be plugged in constantly. A USB hub can help you out here. 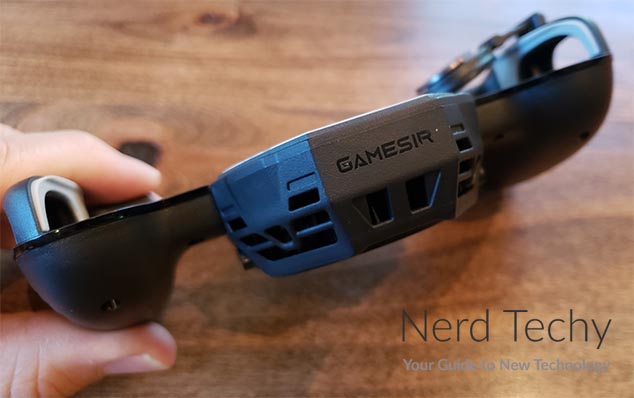 That said, there’s a probable reason for the battery-free design. If you look at how the F8 Pro is constructed, there’s really nowhere to put an internal battery. Most likely, GameSir went this route for reasons of size and weight. It was either that or integrate some kind of clunky solution, like a giant battery fob. 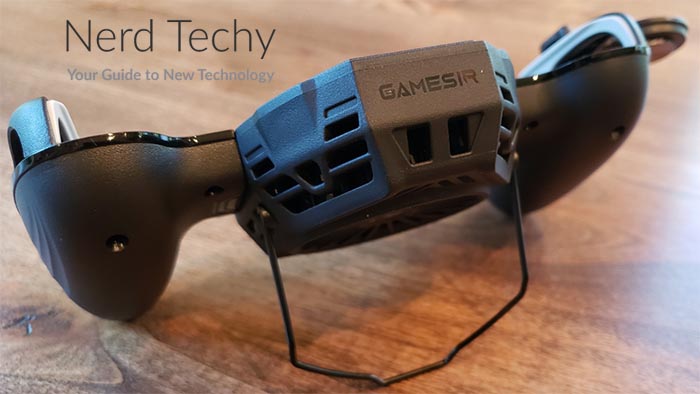 There are a number of grips on the markets with built-in fans for cooling your smartphone. However, the F8 Pro is unique in that it uses “advanced semiconductor refrigeration technology.” What in the world is that supposed to mean? And what makes it better than an ordinary fan? To be totally honest, we weren’t sure if this was a legitimate technology or not. So we looked it up, and it turns out that semiconductor refrigeration is a real thing. But it’s normally referred to as “thermoelectric cooling.” 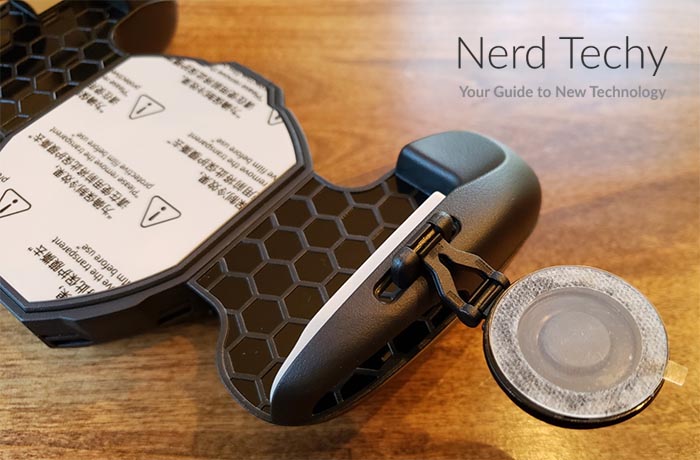 Thermoelectric coolers operate based on a principle called the Peltier Effect. We’re not even sure we understand it, because there are a lot of physics involved and it’s complicated. Without getting too far into the weeds, this kind of cooler is capable of cooling your device without a compressor. When it’s exposed to a DC current, heat is transferred from one side of the semiconductor to the other. As a result, one side of the plate gets cold, while the other side gets hot. The cold side is then applied to your device, while the hot side remains in contact with a heat sync. A fan blows air over the heat sink, distributing the heat and allowing it to keep absorbing more. 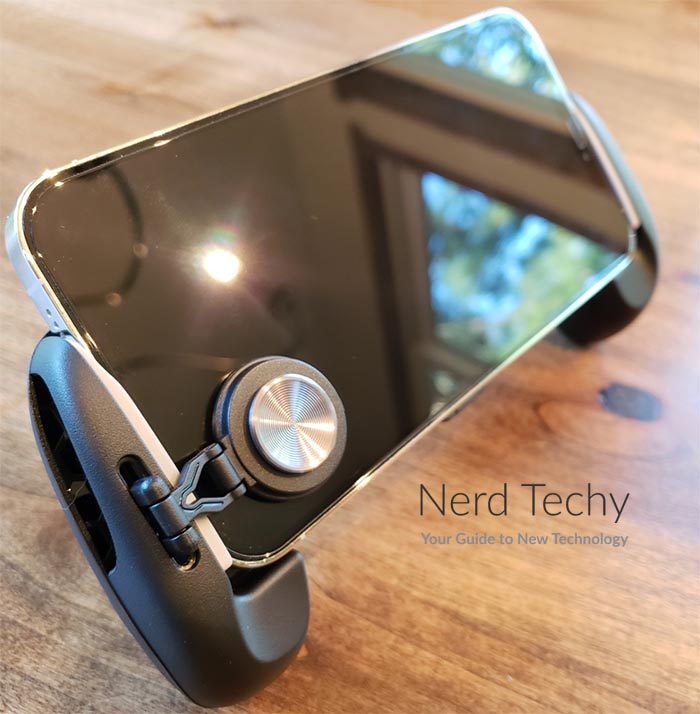 The main benefit of thermoelectric cooling is that there are no moving parts. You don’t have to worry about compressor failures or anything of that nature. There’s also less vibration overall, which reduces wear and tear on your device. This is a dubious benefit when applied to a controller grip. It’s bound to take a beating, so a little vibration would be a non-issue. That said, it’s really the only cooling option that would work in this small a package. You’re not going to fit a normal AC compressor inside a game controller! This small size is a major advantage, and it’s the main reason thermoelectric cooling was an ideal choice. 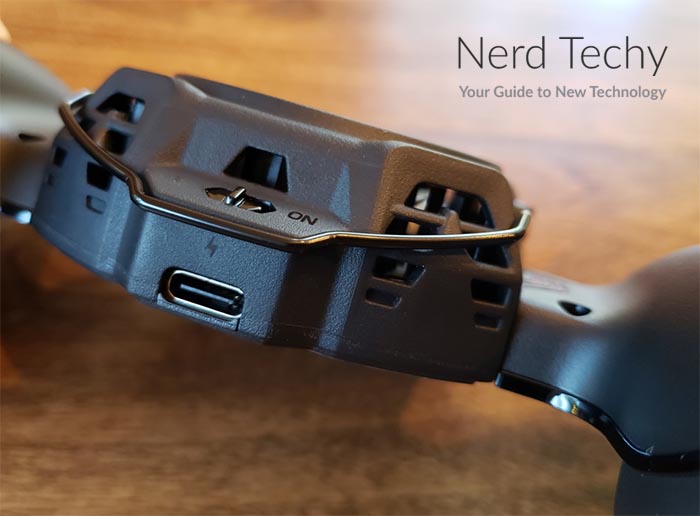 As far as effectiveness goes, it’s hard to judge for sure. The F8 Pro certainly seems cooler than a fan alone. That said, it’s not blowing air through your phone. It relies on direct physical contact to absorb heat directly. As a result, a lot of its effectiveness depends on your phone case. The thinner the case, the better heat conduction, the more effective the cooler will be. The same is true for metal phone cases, which tend to do an excellent job of conducting heat. 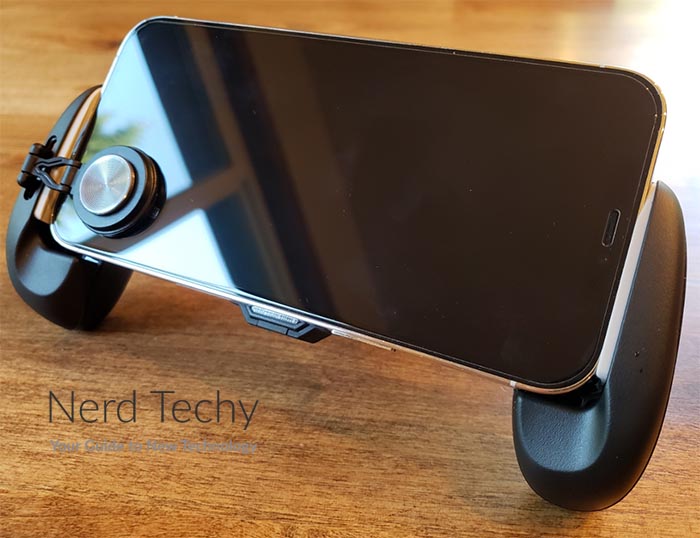 The GameSir F8 Pro has a few additional bonus features that are worth taking into consideration. To begin with, there’s a removable joystick on the left hand side. The “stick” is very short, so it’s more of a round D-pad than a true joystick, but it still works well. The joystick mounts on an arm, which is flexible at two different joints. As a result, it can easily accommodate phones of varying thicknesses. It also mounts in a track that allows it to move up and down. So you can adjust it wherever it’s needed for directional controls in your game.

Another thing we liked is that the grip doubles as a stand. There’s a little metal kickstand that you can flip out from the back, and which folds back up easily. It’s spring-loaded, so you don’t have to worry about it falling open by mistake. There’s not much to it, but it’s a nice added touch for watching movies and videos. In addition, there’s a color-changing RGB backlight inside the fan. This is purely decorative, and it’s no reason to run out and buy an F8 Pro. Even so, it gives that touch of color that gamers know and love. 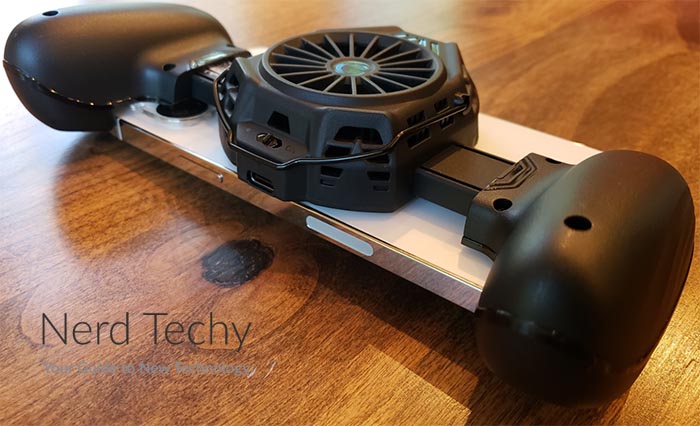 One thing you don’t have to worry about is a smartphone app. There isn’t any. The cooler works just fine without having to set it up or choose any options. You also don’t have to worry about incompatibility with a particular phone. As long as it fits, the operating system and version simply don’t matter. On the other hand, you also can’t make any changes to the default settings. You can’t turn off the RGB lighting, or even make any adjustments. You also can’t slow the fan down or control the speed. To be fair, fan noise is minimal, at a maximum in the mid-30dB range. Still, it would have been nice to have the option, particularly for the RGB lighting.

If you want to have more controls on your grip, the GameSir X2 might be a better choice. It clamps onto your phone just like the F8 Pro. It has a full set of buttons, along with two joysticks and a D-pad. However, it doesn’t cool your phone off. It’s just a clamp-on controller. 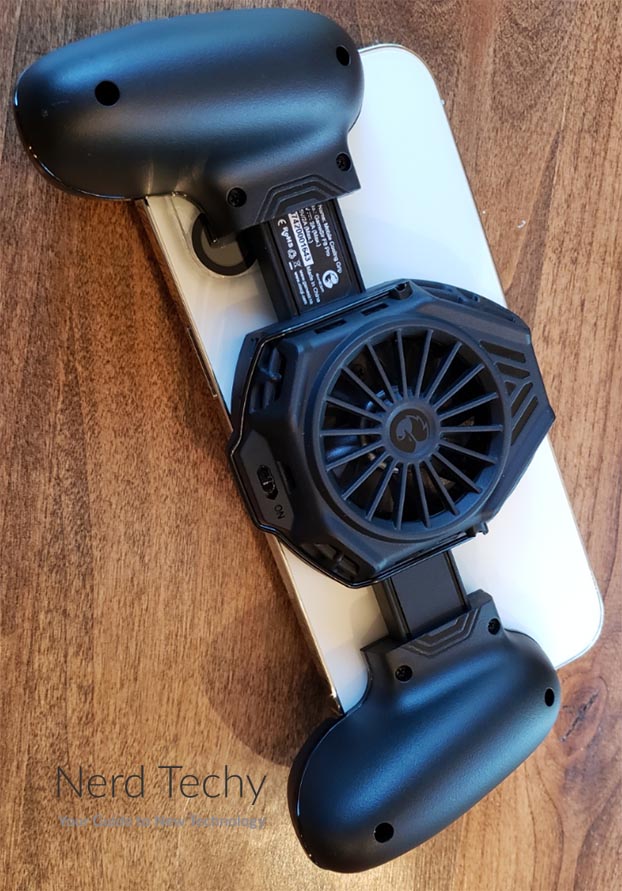 So, is the GameSir F8 Pro Snowgon Mobile Cooling Grip worth your investment? A lot depends on what you’re looking for. This is a reliable, easy-to-use grip that’s comfortable and compatible with most phones. If you want an easy snap-on option, this is it. On the other hand, the only control feature is a single joystick. If you need your grip to function as a full controller, you’ll want to look elsewhere.

The cooling performance is reasonably good, although your mileage may vary. The most important thing is to use a bare phone, or one with a slim case to maximize heat transfer. If you’re rocking an Otter Box, the cooling function won’t be terribly effective. Along the same lines, you’ll need to be plugged in at all times. Whether or not that’s a problem will depend on how you usually game.