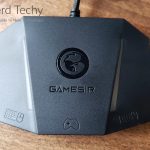 If you’re a gamer, your control scheme is where the rubber meets the road. This isn’t a loose analogy. If a car’s tires don’t grip the road properly, nothing the driver does matters. Along the same lines, if your controller isn’t responsive, it will negatively impact your game. This can be true even for the most talented of gamers. That’s why people spend so much time and effort finding the perfect controllers.

But the right control isn’t purely a matter of preference. It also makes a difference what type of game you’re playing. For example, suppose you’re a fan of first person shooters? In that case, the control scheme of choice is typically a mouse and keyboard. The advantage here is so extreme that many developers actually make their hit boxes larger than on PC. There are similar advantages in strategy games, or any games with deep menus. To be fair, controllers have their advantages as well, but that’s not what we’re talking about today.

For PC players, this isn’t a big deal. You can switch between keyboard and controller as necessary, depending on what you’re playing. On the other hand, this hasn’t traditionally been an option for console players. At most, you might be able to get an aftermarket controller with extra buttons.

Earlier this year, GameSir changed that with their original VX AimBox. The AimBox lets you connect a mouse and keyboard to your game console, for superior performance in many games. But the original also had some flaws to work out. It didn’t work with the PlayStation 5, and you couldn’t use it with a headset. Now, GameSir has released the updated VX2 AimBox Console Keyboard & Mouse Adapter. This version supports PlayStation 5 and headsets, along with some more minor upgrades. Let’s take a closer look, and see how well it performs in the real world! 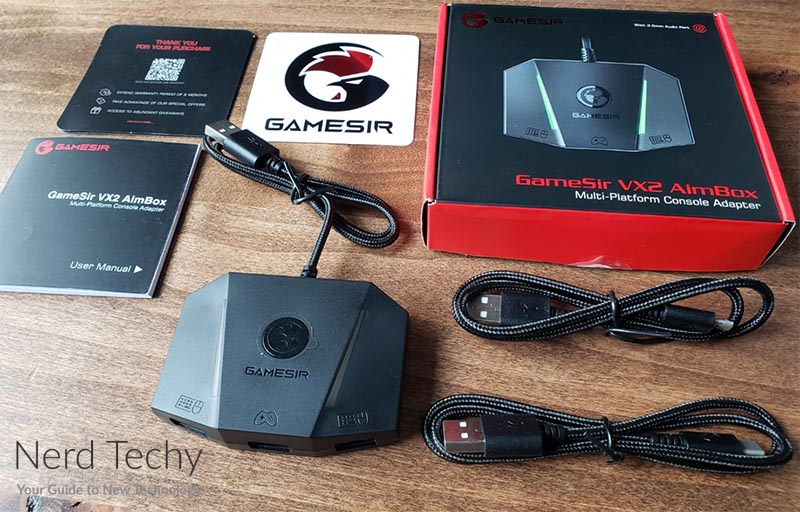 The GameSir VX2 AimBox Console Keyboard & Mouse Adapter has an irregular, roughly trapezoidal profile. The housing is black, with a matte finish that will blend in well with your other electronics. It’s also relatively compact, at 3.15 inches wide, 2.28 inches deep, and only 0.73 inches thick. And at only 3 ounces in weight, it’s light enough to carry easily just about anywhere. A 19 ½-inch USB cord extends from the back, to connect to your console. It has a rugged, anti-twist design, with a nylon weave cover that can handle significant abuse. On the bottom of the housing, there’s a set of rubber skids, which keep it from sliding or scratching. There’s also a weight inside, in the bottom half of the unit. This ensures that the adapter stays flat and level, even when it’s under stress. 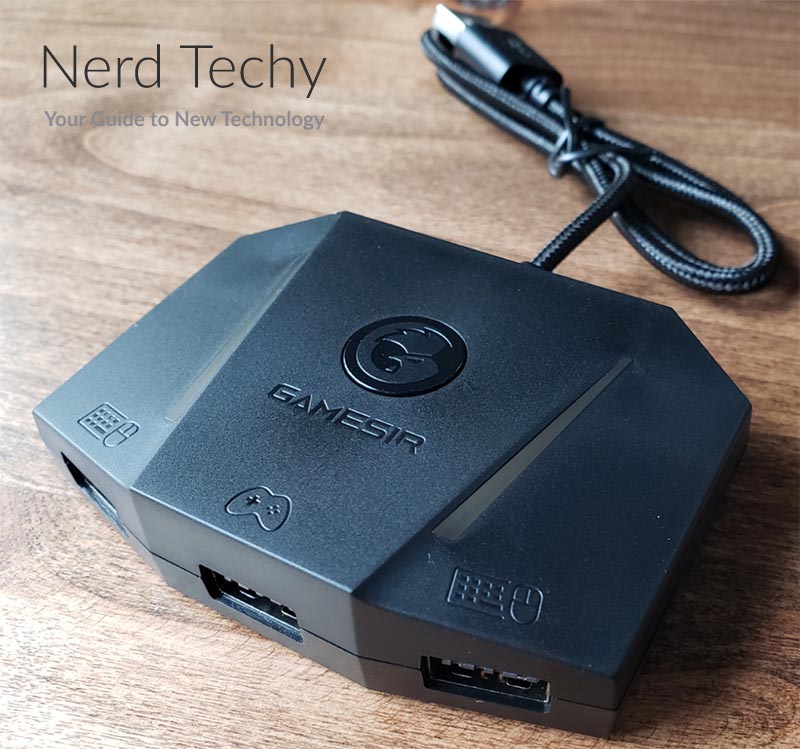 The USB ports are all located on the front of the housing. There are three in total, evenly spaced apart. The center port points directly out the front, while the other two are angled out to the sides. This makes cable management easier, since you won’t have cables crossing over each other. Not only that, but it’s easier to plug and unplug your devices. With a little more separation between the ports, there’s more room for your fingers. Another thing that makes the ports easier to use is that they’re reversible. They’re extra thick, with tabs in the center, and you can insert a USB Type-A plug either way. That way, you don’t have to worry about how your plugs are oriented. In addition, you’ll find a 3.5mm aux jack on the left side of the housing.

On the top of the housing, there’s a glossy GameSir emblem embossed directly in the center. To either side, you’ll see two diagonal LED stripes. These are angled from the back corners to the front center, and are brightly illuminated when plugged in. The LEDs can be changed between red, green, and blue depending on your preferences. There are additional embossed glossy icons on the top, above each of the three USB ports. These represent either a mouse and keyboard or a console controller, depending on the port. 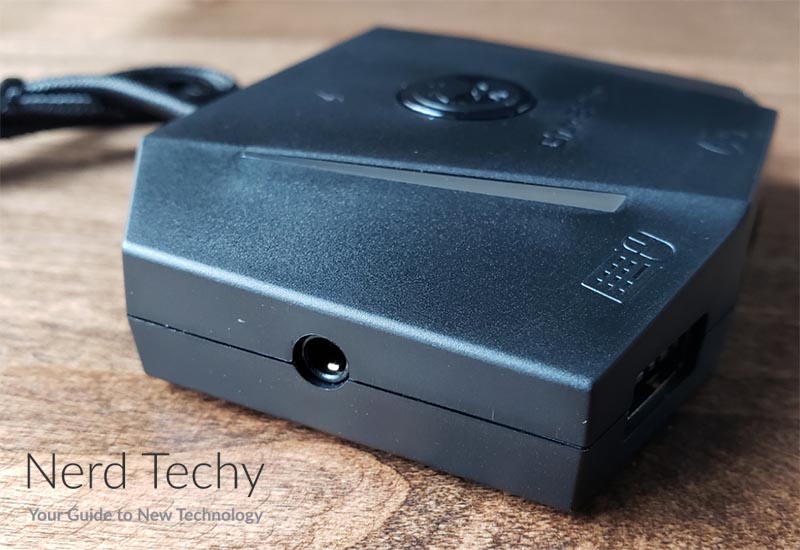 Now that we’ve looked at the physical design, we can talk about how the VX2 AimBox works. Let’s look first at compatibility. What consoles can it be used with? The short answer is that it works with any current- or last-generation console. This includes the Xbox One, One X, and Series X/S, as well as the PS4, PS5, and Nintendo Switch. Here’s where things get a little weird, though. For most consoles, you simply set up the AimBox using the console’s standard controller. But the PS5 is a little bit different. With the PS5, you can’t use the standard DualSense controller. You have to use a third-party controller, but it has to be one that’s Sony-licensed. For backward-compatible PS4 games, you use a DualShock 4 controller instead. 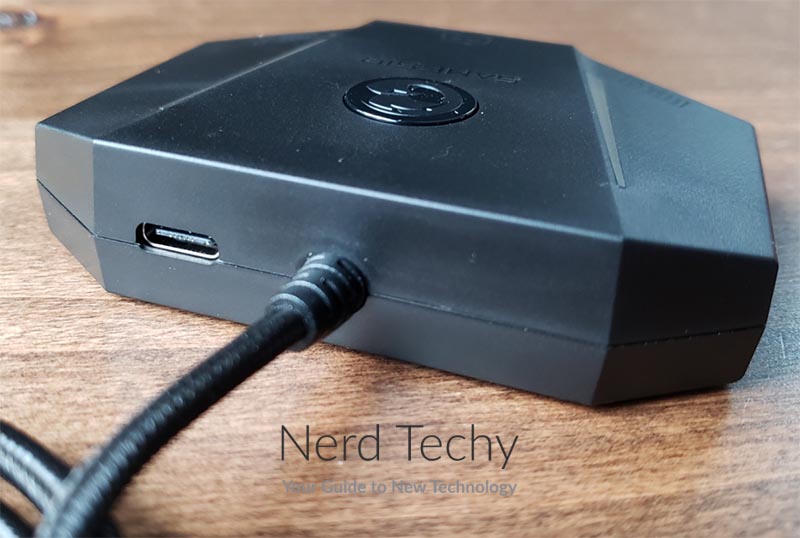 But what if you want to play on your Android or iOS device? In that case, the GameSir T4 Mini might be a better choice. It’s just a standard controller, not a mouse and keyboard. But it works with the Nintendo Switch, as well as PCs and iOS and Android devices.

To use the VX2 AimBox, you first have to connect your console controller through it. Plug it into your console, then plug your controller into the center USB port. Keep in mind that this has to be a wired connection, and it has to be in your center port. If you perform normal wireless pairing, you’ll pair with your system, bypass the AimBox, and it won’t work. 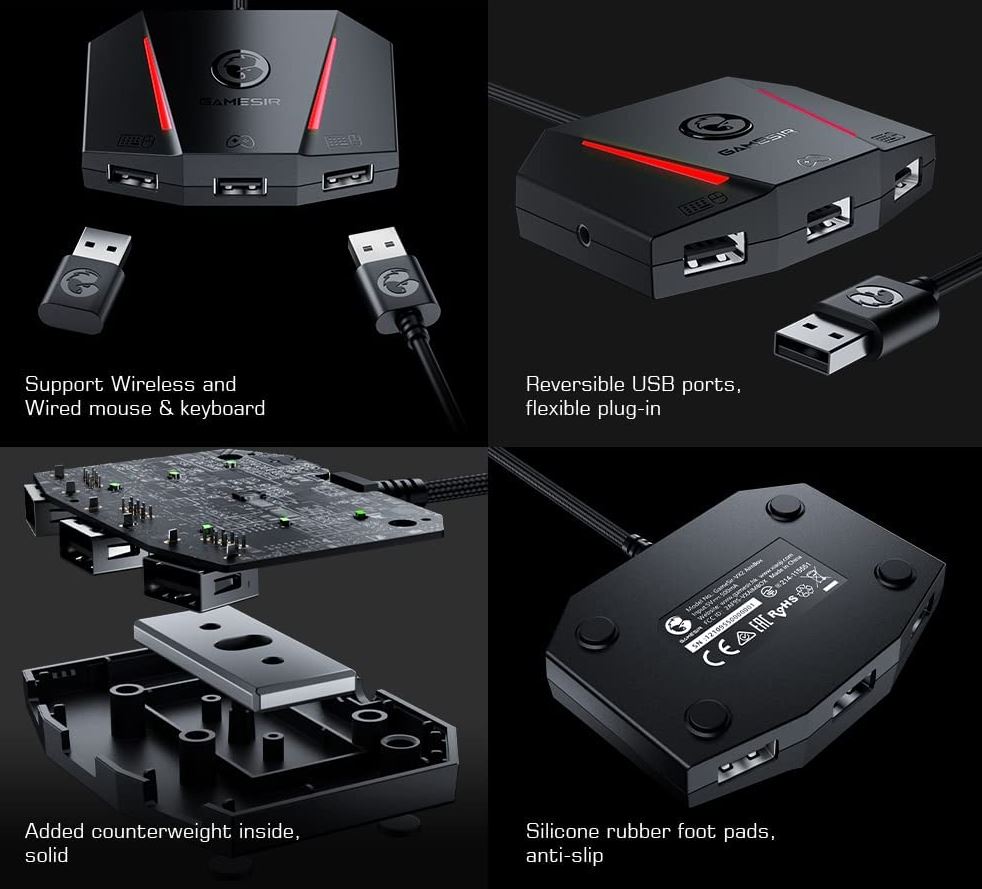 Next, connect your mouse and keyboard into the two side USB ports. It doesn’t matter which device works in which port. Both can be on the left or the right without causing any issues. If you have a wireless keyboard or mouse, it will still work. Just put the wireless dongle into the USB port instead, and it will work just fine. The AimBox also connects via Bluetooth 5.0, but not to controllers or keyboard. Instead, it uses the Bluetooth for connecting to the smartphone app.

One major criticism of the original VX AimBox was that you couldn’t connect a headset through it. This was a huge setback for any kind of multiplayer gaming, since team chat basically didn’t work. It also meant you had to use your TV speakers for game sound, which could annoy other household members. The VX2 AimBox, however, allows you to connect your headset via the 3.5mm audio jack. This means you can participate in team chat, and use your mouse and keyboard for multiplayer gaming. There’s one major caveat, though; the headset function won’t work on a PlayStation 5. 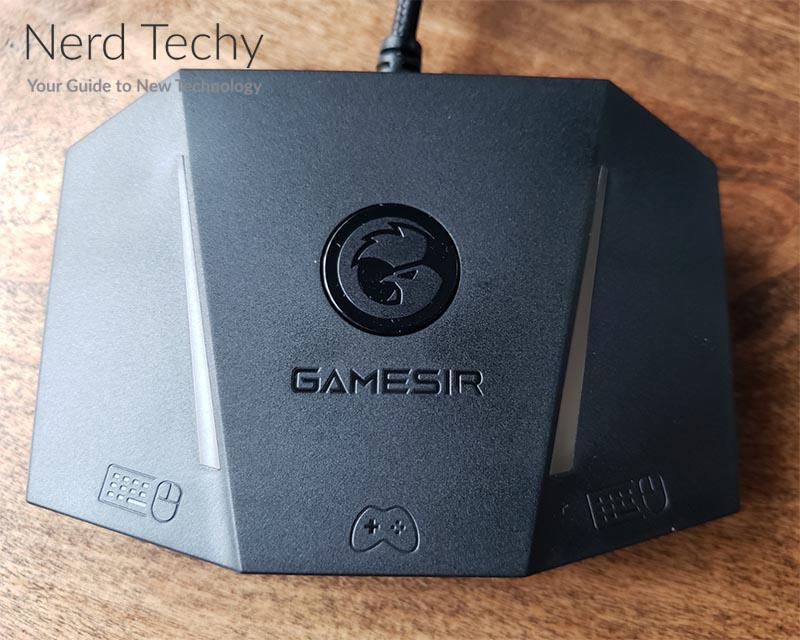 So, you can use the VX2 AimBox with pretty much any system. But how well does it actually perform? To begin with, let’s talk about the mouse movement, since it functions differently than a thumbstick. For example, let’s say you’re playing a shooter, and you want to turn around. You push the thumbstick to the side, and hold it there until you’ve turned your character around. But with a mouse, you move the mouse continuously. A mouse at rest is like an untouched thumbstick – it’s not doing anything. To bridge this gap, GameSir uses what’s called an agility translator. Without getting too far into the weeds, this technology converts mouse movements to thumbstick movements. 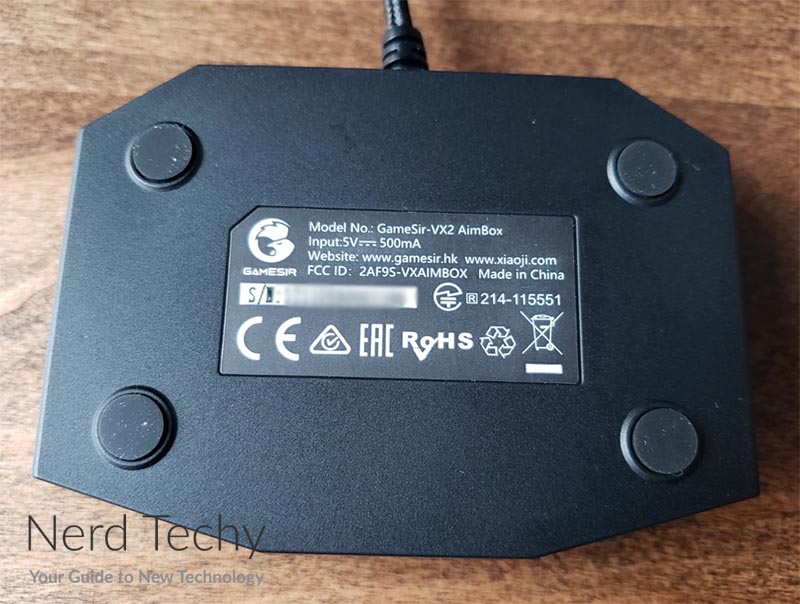 Normally, the agility translator works pretty well. Your mouse works like you’d expect it to, and moves your character accordingly. But you might want more or less sensitivity depending on your preferences. You might also want to calibrate your mouse so it moves up and down, left to right on an even line. This can be different for different people, and it’s where the GameSir app comes in. Using the app, you can calibrate your mouse and adjust the sensitivity as needed. This makes for a comfortable, smooth gaming experience that’s free of control-related frustrations. 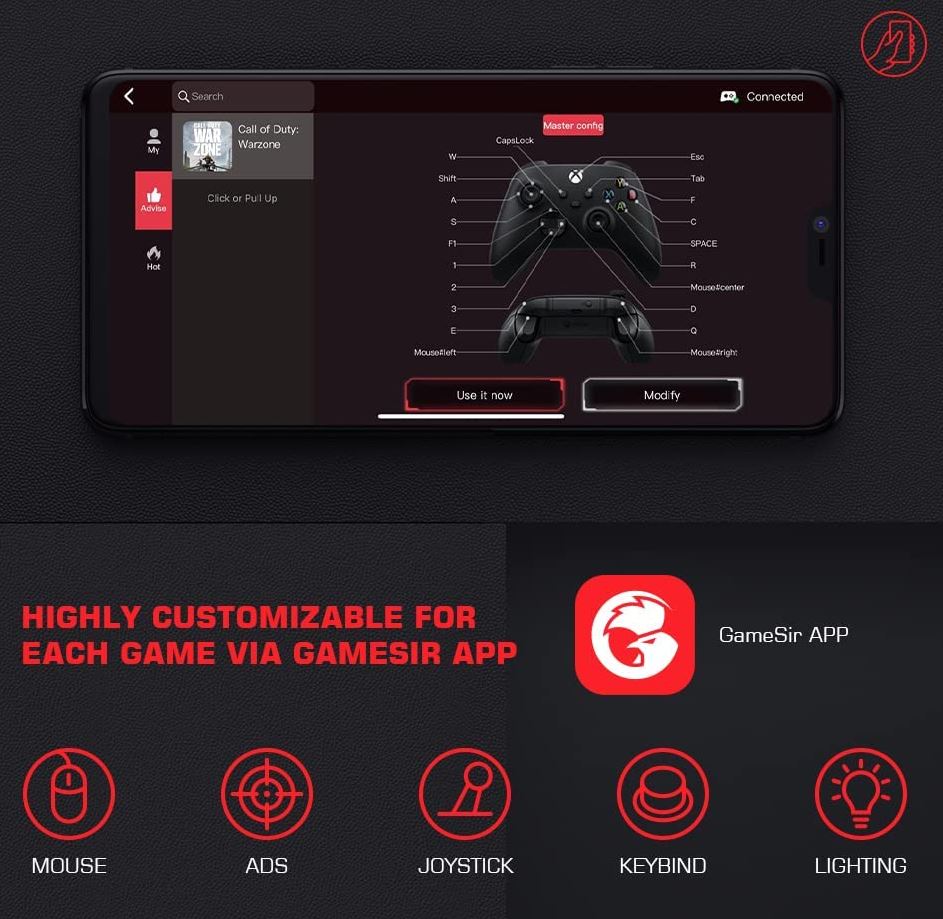 Within the app, you can also make a number of other changes. To begin with, you can adjust the lighting effects, but that’s just a cosmetic thing. More importantly, you can create your own keybinds. This lets you create a custom control scheme for your games. Admittedly, it’s not as impressive as having the same feature on a PC. Ultimately, you’re still using a limited set of buttons. But you can at least create a control scheme that works right for you. You can also create turbo keys, which is a great touch that classic gamers will appreciate.

For a different take on custom controls altogether, take a look at the GameSir X2. It’s a USB Type-C controller that clamps right over your Android phone. This nearly-universal design makes it an ideal Android gaming companion. That said, it’s a traditional controller, not a keyboard or mouse. 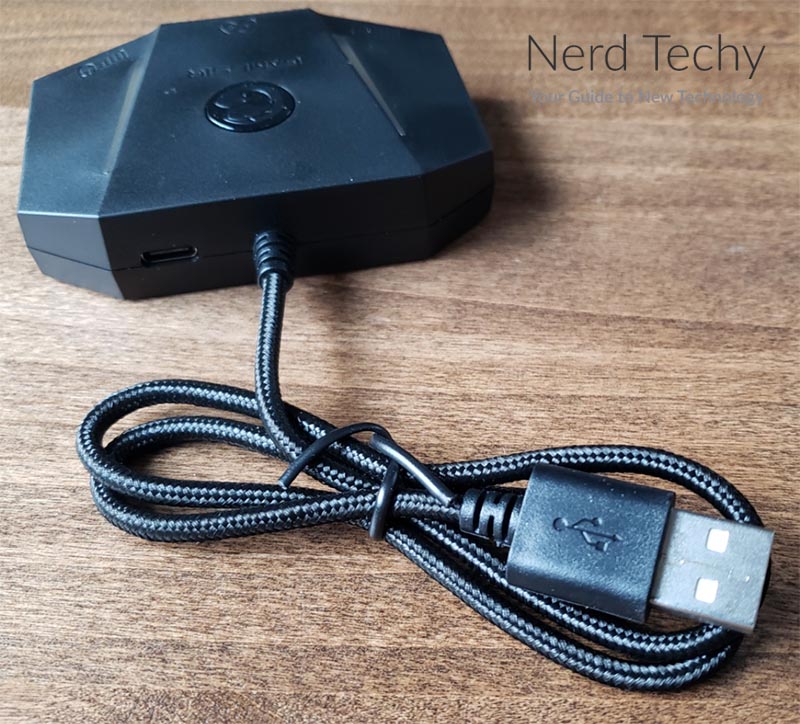 The GameSir VX2 AimBox Console Keyboard & Mouse Adapter is a powerful gaming accessory. By allowing you to use your keyboard and mouse for console games, it gives you far more functionality. It’s also a great upgrade from the original AimBox, with added support for the PS5. It’s not perfect. For one thing, you still can’t use it with the DualSense controller. But on other platforms, that’s a non-issue. Not only that, but the app offers some impressive features. We love that you can recalibrate your mouse for better accuracy, and create your own controller presets. All things considered, this adapter is well worth your time and money.

These are the Best PS5 Game Organizers
December 8, 2021