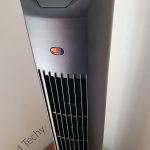 As the weather goes from cold to warm, it’s time to think about how we’re going to stay cool all summer. The obvious answer is to turn on the air conditioning. But air conditioning can get expensive, particularly if you have a large house.

For this reason, a lot of people use fans to help stay cool. By creating a breeze in your house, a good fan can make it feel much cooler than it is. And there’s no rule against using a combination of the two. Let’s say you prefer to have the A/C set to 68 degrees, but your power bill is killing you. You could set it to 72 instead, and use a fan in whatever room you’re in.

Of course, there are any number of fans to choose from. One of the most popular designs is the traditional oscillating fan. These fans are circular, pole-mounted, and rotate from side to side. It’s a tried and true design, and it’s undoubtedly effective.

That said, traditional fan design has a couple of downsides. For one thing, the design tends to be top-heavy, which makes them easy to knock over. For another thing, they can be hazardous for small children. There are often gaps in the grille that little fingers can fit through. This can cause injuries, particularly to kids, whose bones aren’t fully developed.

Today, we’re going to review the Grelife 36″ Tower Fan. This is a vertical, rectangular fan that’s less top-heavy than traditional oscillating fans. It’s also specially designed to be safe to use around kids and pets. It runs quietly, and the simple controls let you select from multiple operating modes.

But that’s a pretty rough outline of what we’re dealing with. To truly understand this fan, we’ll need to take a deeper dive into all aspects of its design.

We’ll start with the physical build. We’ll talk about how it’s constructed, and what it looks like. Next, we’ll discuss the specifics of the control scheme, and the various operating modes. We’ll also look at any extra features that bear mentioning. After we’ve thoroughly evaluated all of these things, we’ll be in a position to render our final verdict. 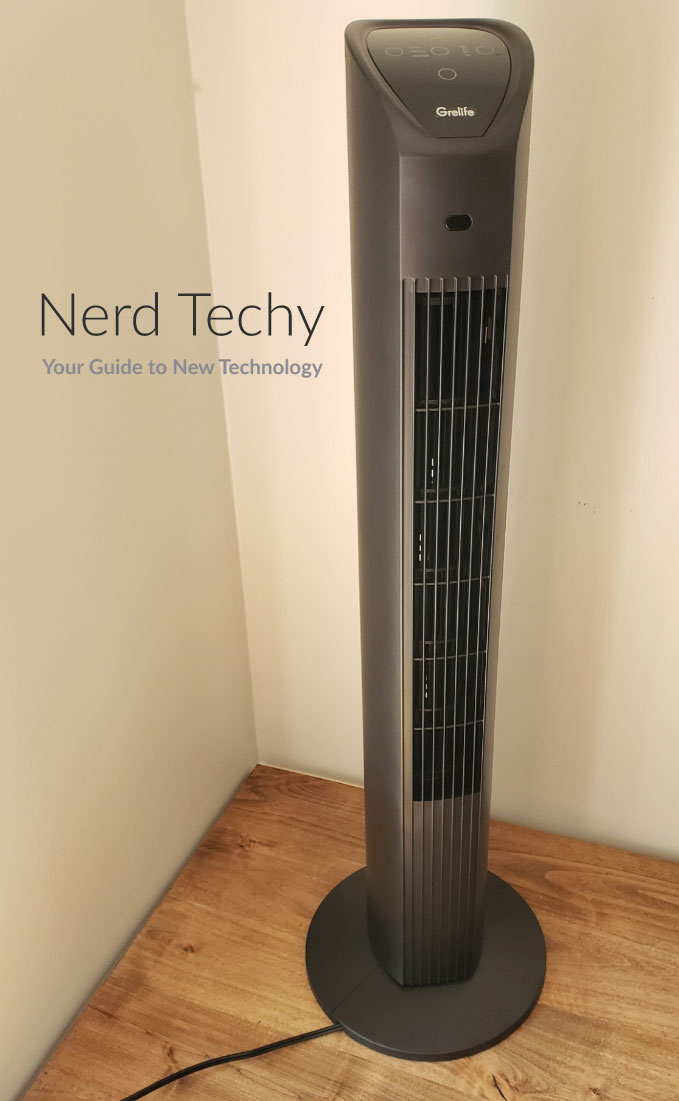 The Grelife 36″ Bladeless Tower Fan is a vertical, rectangular tower that sits on top of a circular base. It’s constructed from plastic, with an easy-to-clean satin finish that doesn’t collect fingerprints. The default option is an attractive black, but you can also order it in grey. This allows you to match it to a variety of décor schemes.

At 9.43 pounds, it’s not exactly lightweight, but it’s easy enough to transport from room to room. The base measures 10 inches in diameter, while the fan itself is 36 inches high. It’s not top-heavy like an oscillating fan, so it’s more stable. However, we still would have liked a wider base. If it were 12 inches in diameter, it would be significantly more stable. 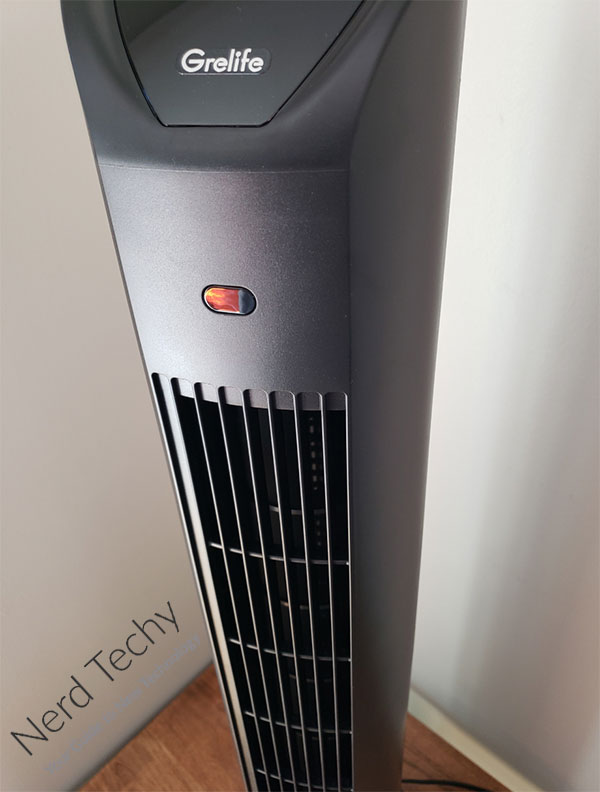 We described this fan as rectangular, but it’s not perfectly squared off. The sides are actually bulged out, and meet the front and back at a slight curve. This allows for a unique internal fan design that makes it very safe for children. Instead of a traditional set of blades, the blades are very thin. 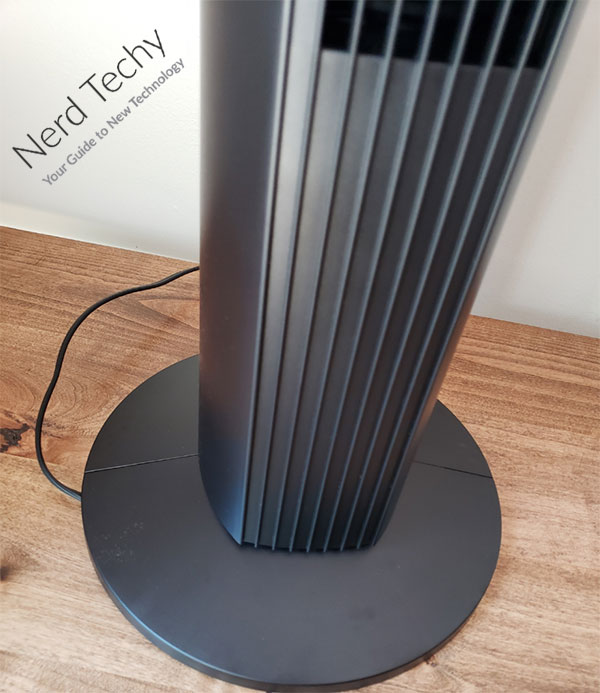 They’re vertical, and arranged in a circle that spins around inside the housing. Any individual blade is slightly flexible, so they’re less hazardous to fingers. In addition, the front grille has very thin openings. Even a baby won’t be able to get their finger far enough inside to do any damage. As a result, this fan is a great choice for people with children or inquisitive pets.

The top panel of the housing is slanted, with the back higher than the front. Here, you’ll see sets of indicator lights. These let you know the current fan speed, operating mode, and timer setting. Along with the lights, there are five soft-touch control buttons. We’ll get into the specifics of those buttons in a little bit. 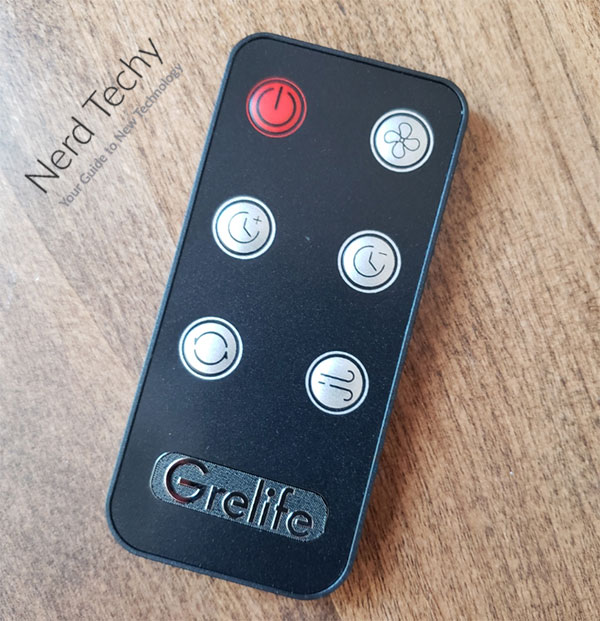 In addition, the kit includes a black handheld remote, with six control buttons. Both the control panel and the remote have the word “Grelife” printed in white at the bottom. Other than that, there’s no branding, which is something we all can appreciate.

One thing we really liked about the Grelife fan is how quiet it is. Even at the loudest setting, the peak volume is 50dB. In most cases, it’s more like 40dB. That’s somewhere between the sound of rustling leaves and the level of a quiet conversation. You won’t have to raise your voice to talk over it, even if it’s right next to you. And at the lowest setting, it only produces a soft “whoosh,” so you’ll have no trouble sleeping. 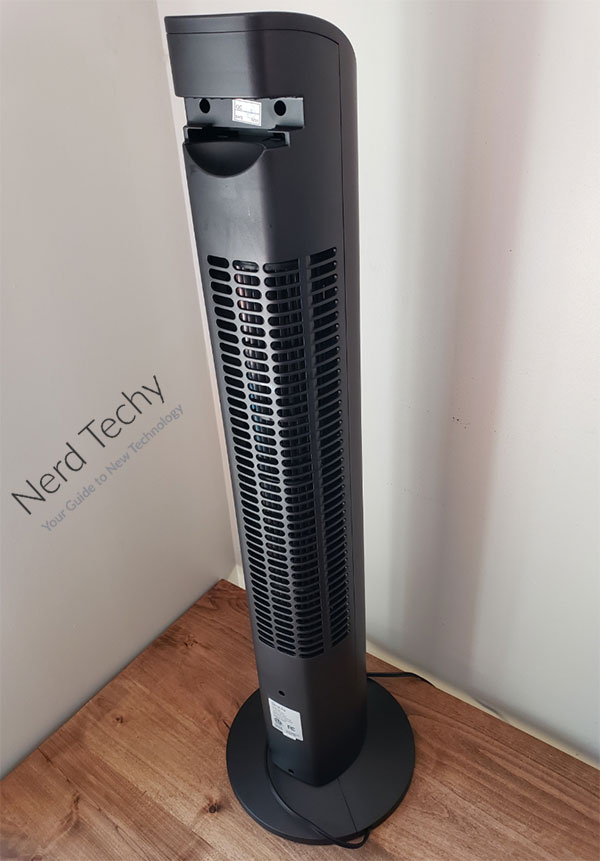 One thing you can’t do with this fan is use it outdoors. But there are plenty of good fans to use on your porch or patio. If you’re looking for something like that, take a look at our list of the best battery-powered outdoor fans. They’ll help keep you cool while you’re having fun in the sun.

So far, we’ve talked a lot about the design, but what can the Grelife tower fan actually do? To begin with, let’s go over the operating functions. Using the button with the fan symbol, you can cycle through three different speeds. These speeds blow air at 13, 18, and 20 feet per second. This isn’t incredibly powerful, even on the highest setting. But as long as you’re reasonably close to the fan, you’ll get plenty of cooling performance. 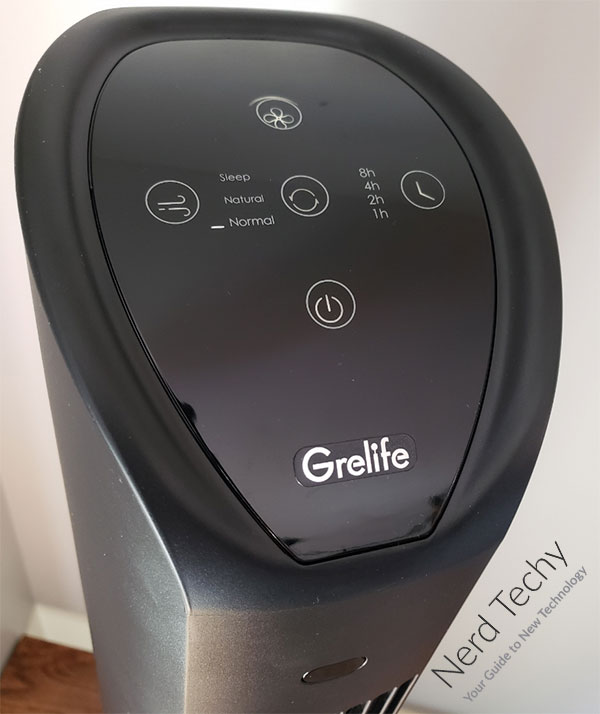 The button with the weird horizontal symbol can be used to cycle through the three different modes. To begin with, there’s a standard, “normal” mode. This is exactly what it sounds like. The fan blows consistently at whatever speed you’ve set it to. The next mode is “natural” mode. This mode is designed to mimic the effect of real wind. The fan will speed up and slow down randomly, but will stay within the right general range. The third button puts you into sleep mode. In sleep mode, the motor drops to the lowest speed, and won’t speed up when you press the speed button.

The button with the circular arrows turns the oscillating function on and off. When oscillating mode is on, the fan rotates back and forth through a 75-degree arc. When the mode is off, the fan will remain pointed at the same place. You can use the oscillating button on the remote for making minor adjustments in the angle. This might be the “lazy man’s method,” but it’s a neat little trick. With a range of 20 feet, you can do this from across the room.

The button with the clock symbol on it is used to set the timer mode. One press of the button will set a timer for one hour; after that, the fan will shut off. Pressing the button again will add another hour to the timer. You can keep adding time up to a limit of 12 hours. If the timer is already set for 12 hours, pressing the timer button will turn the timer off. The fan will return to its ordinary constant operation. 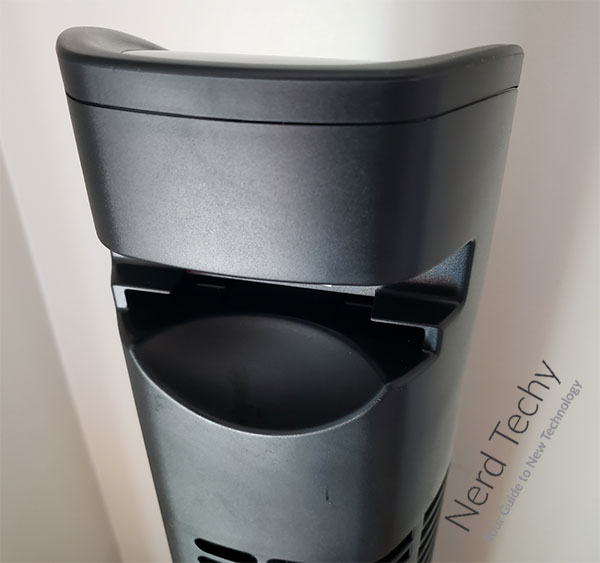 This is all great news for anyone who wants to stay cool around the house. But what if you’re hiking or camping? It’s simply not practical to carry a full-sized fan with you. If that’s what you need, consider a handheld portable misting fan. They’re lightweight, portable, and surprisingly effective.

Beyond its basic functions, the Grelife fan has a few bonus features up its sleeve. One thing you’ll notice is that the control panel’s LEDs don’t stay on. They illuminate when you press any controls, but shut off automatically after 30 seconds. This is great for nighttime, since it won’t be lighting up your bedroom. 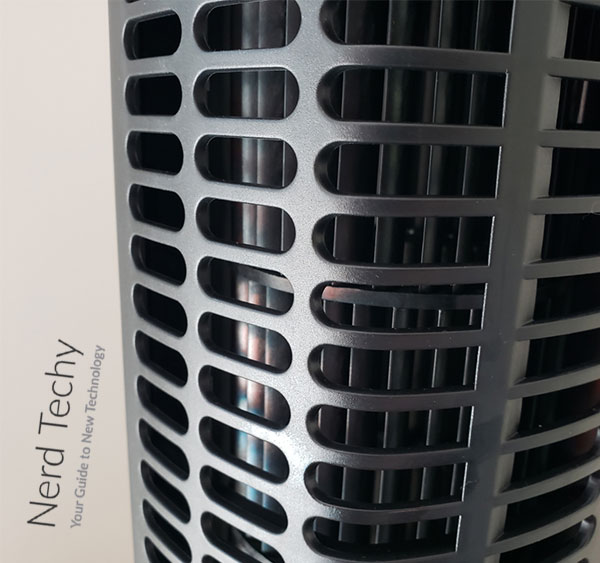 Another nifty feature is the cutout in the top back. This large cutout serves two purposes. To begin with, it serves as a carrying handle. This way, you can carry the fan around with one hand. Not only that, but there’s a slot in the bottom of the cutout. This little slot is molded to fit the remote, so you always have somewhere to store it. When you put the fan away for the winter, you don’t have to worry about losing the remote. 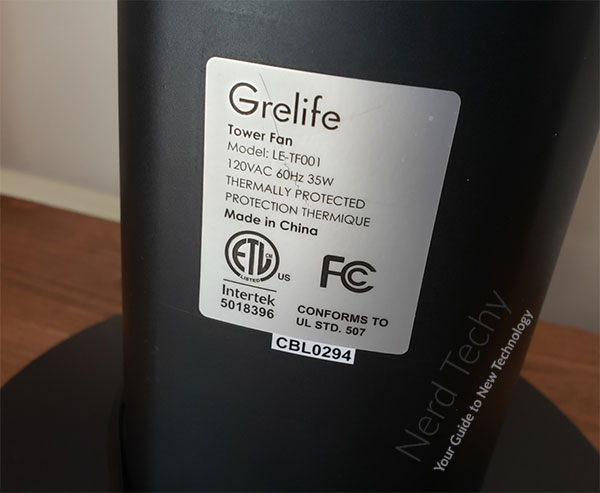 Finally, the plug has a built-in safety fuse. The fuse will trip in the event of a power surge or spike, so your fan doesn’t get damaged. If this happens, just hit the reset button to continue using it as normal. On the downside, the cord is only five feet long, so you’ll have to be relatively close to the outlet.

One thing this fan won’t do is warm your room up. If you want that, you’re going to want a different kind of machine altogether. Take a look at the PARIS RHÔNE portable heater. It’s an air-powered space heater that warms up the whole room. 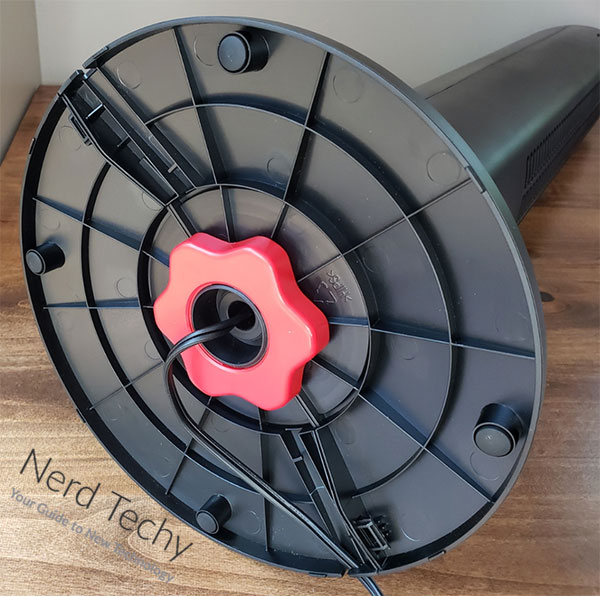 As you can see, the Grelife 36″ Bladeless Tower Fan is well-engineered in most respects. Our only complaints were minor. The base could be a bit larger, and the blowing power could be a bit higher.

On the plus side, you’re getting one of the safest fans on the market for children and pets. We also liked the multiple operating modes. The “natural” mode was particularly unique; we haven’t seen anything else quite like it. Meanwhile, you get simple, convenient controls. And extra features like a child lock and storable remote add even more value.