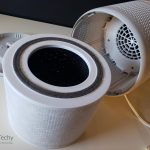 These days, cleanliness and sanitation is on everybody’s minds. We’re all washing our hands more often, and keeping surfaces clean. But the current crisis isn’t the only threat to our health. Some of those threats can come from the very air we breathe. Our homes can harbor mold, pet dander, and toxic chemicals. And thanks to the sealed design of modern homes, we don’t get as much fresh air as we should. Let’s be honest. Most of us are running either heat or air conditioning most of the time. This means that outside air doesn’t cycle through and remove contaminants the way it should. So contaminants can continue to build up over time.

One way to battle this phenomenon is to use an indoor air filter. These filters will constantly remove contaminants from the air, leaving it as pure as an Alpine breeze. One of these indoor air purifiers is the Levoit Core P350 Air Purifier, which we’re about to review. This is a relatively small filter, which is designed to purify the air in a single room. It’s great for bedrooms, home offices, or kitchens. But how well does it actually perform in practice? Let’s take a closer look, and find out how it stacks up to other air purifiers in its class. 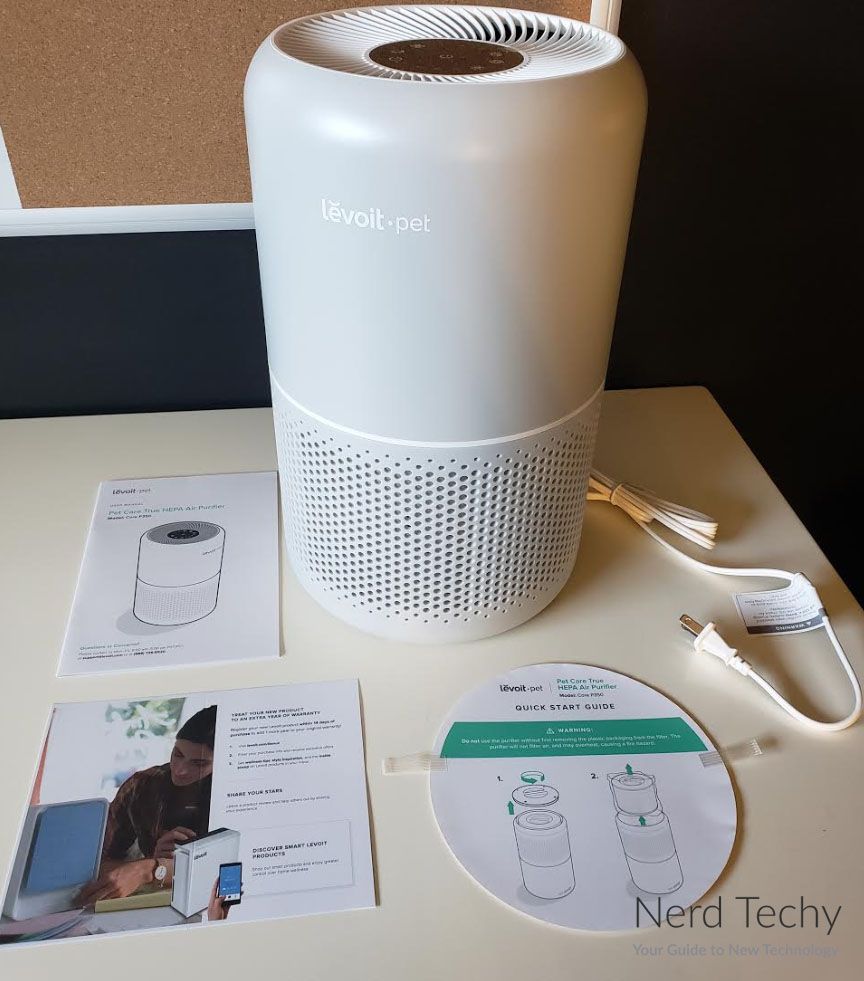 The Levoit Core P350 Air Purifier is a compact cylinder, 14.2 inches high and 8.7 inches in diameter. It weighs 8.9 pounds, which feels a bit heavy for the size. Still, it’s not terribly heavy in objective terms, and it’s easy to move from room to room. It also makes an attractive household accessory. The case is constructed from silver ABS plastic, with a white band around the center. The bottom half of the unit houses the filter itself. Around the entire circumference, there’s an intake grill that consists of a grid of small holes. Above the band, the unit has a smooth, glossy finish, interrupted only by a white “Levoit-pet” imprint. 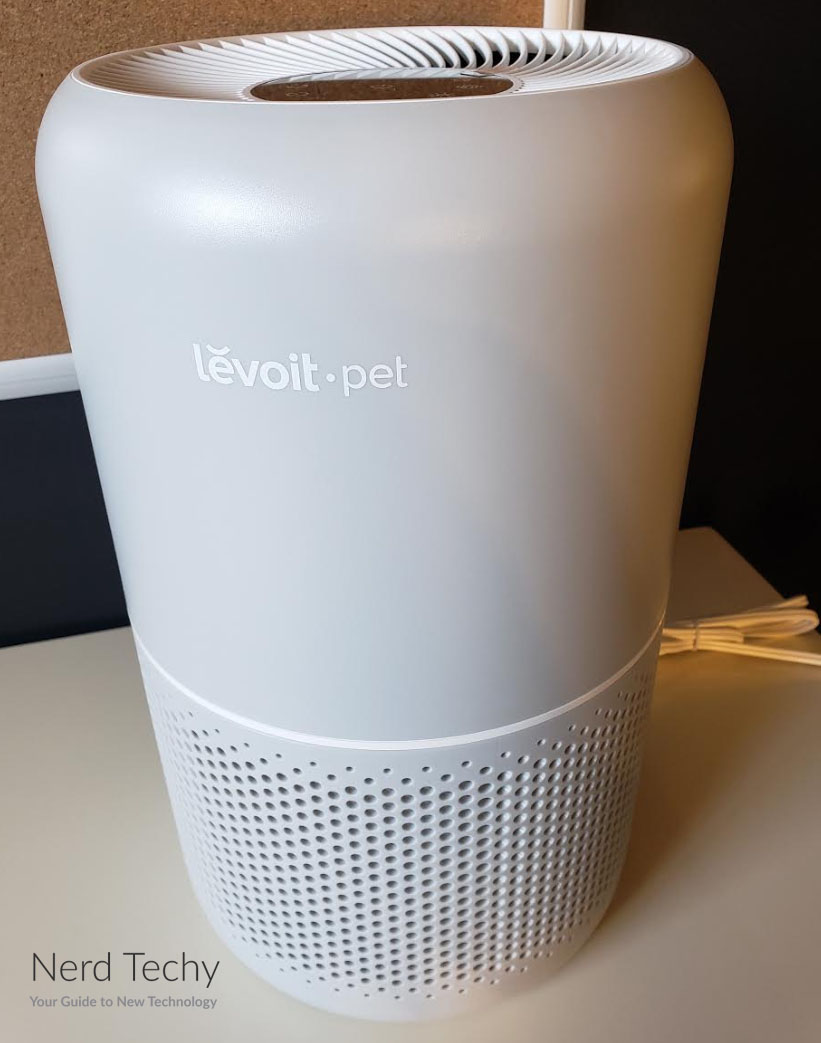 The motor itself is fairly powerful for the size. It utilizes an AC capacitor and a high-precision bearing. This ensures a long life, with minimal wear and tear even with intense, constant use. The 360-degree air intake is very effective at drawing in air from throughout the room. That said, its effectiveness will depend on placement. If it’s sitting on a shelf or jammed into a corner, it’s going to be less effective. If it’s placed on the floor or a table in the middle of the room, it’s going to be more effective. Keep this in mind when you plan on placement. The top outlet has a spiral design, ensuring that clean air is evenly distributed throughout the room. 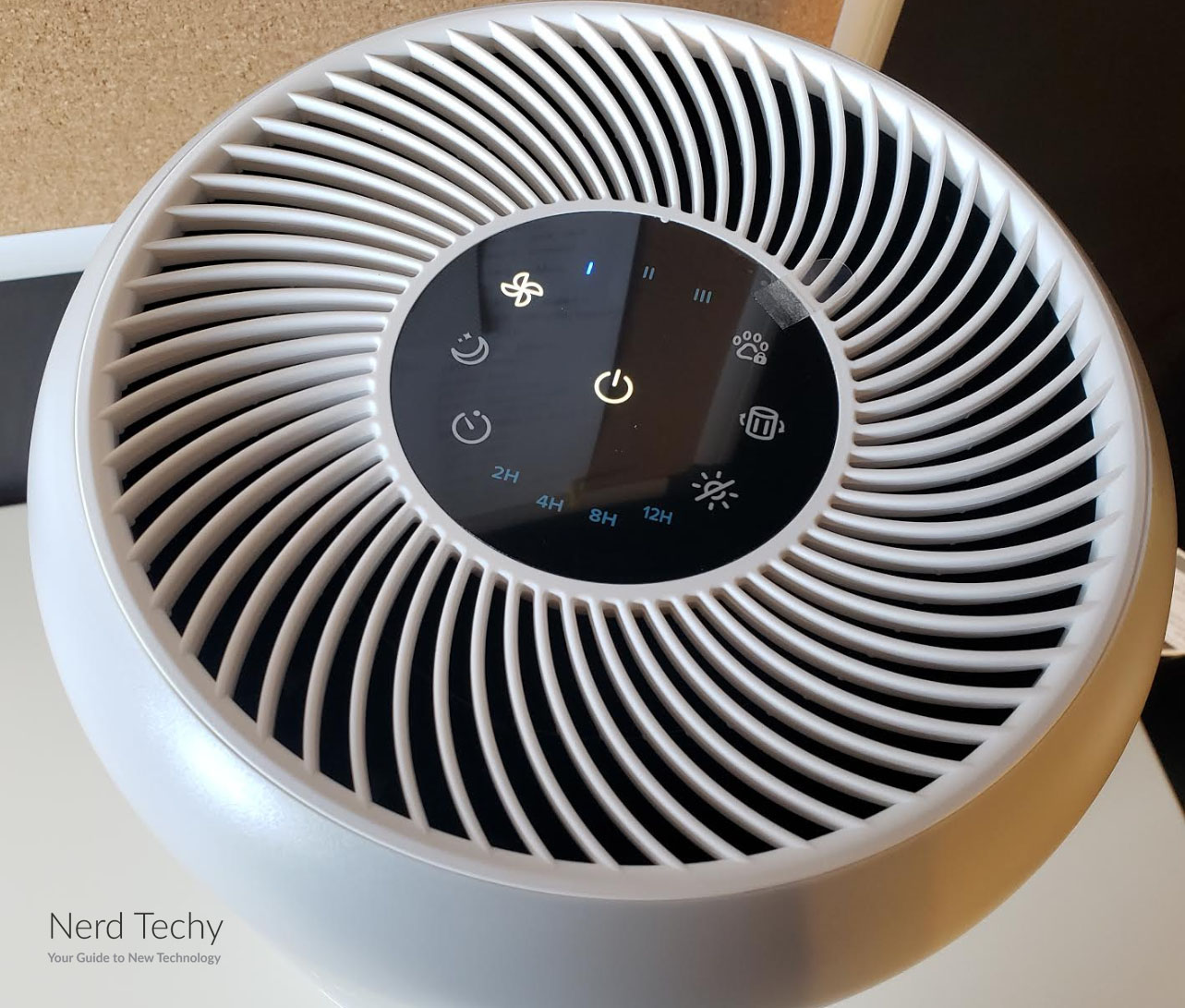 The top of the Core P350 is white, rather than silver. This provides an attractive contrast to the silver body of the unit. In the middle of the spiral vent, there’s a control panel that operates all of the filter’s functions. There are seven soft touch LED buttons in total, with the power button located in the center. On the left, you’ll find fan speed, sleep mode, and timer controls. On the right, you’ll find the pet lock, filter indicator, and display buttons. The filter indicator will illuminate when the filter is dirty. After you’ve changed the filter, press the button to reset it. On the top, there are three lights that indicate the fan speed. On the bottom, there are four additional lights indicating the timer status.

If you prefer a rectangular filter, Levoit provides several options for you to choose from. For example, we recently reviewed the Levoit Vital 100 True HEPA Air Purifier. It sports a 6-inch thick rectangular profile, with an easy-to-change filter, and treats up to 500 square feet of air. 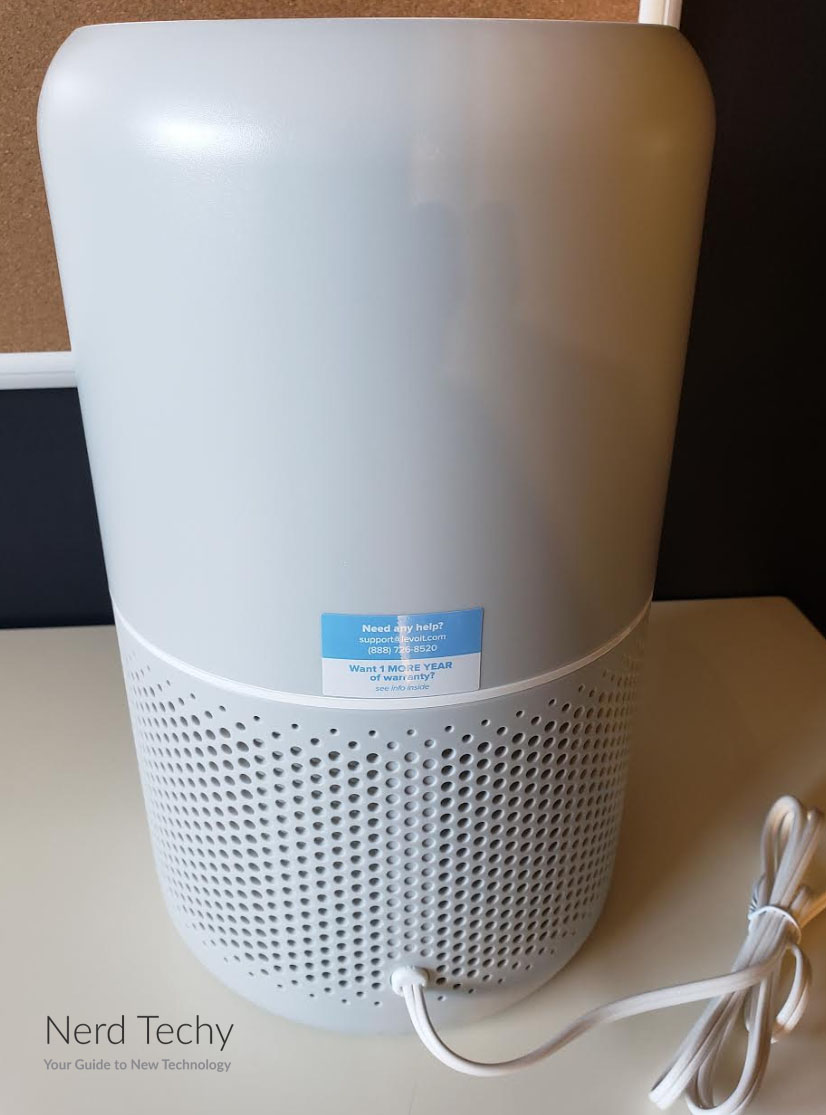 So, how does the Core P350 Air Purifier work? There are a couple of different options. First, you can simply use the power button to turn it on. In this mode, you can run the unit continuously, with three different fan speeds. This is probably the most popular way of using it, since it will constantly keep your air clean. Alternatively, you can use a timer for short-term cleanings. The timer button will cycle through 2, 4, 8, and 12-hour modes. When using the timer, you can still adjust the fan speed manually. In total, you can treat up to 219 square feet of space, assuming a standard eight-foot ceiling. 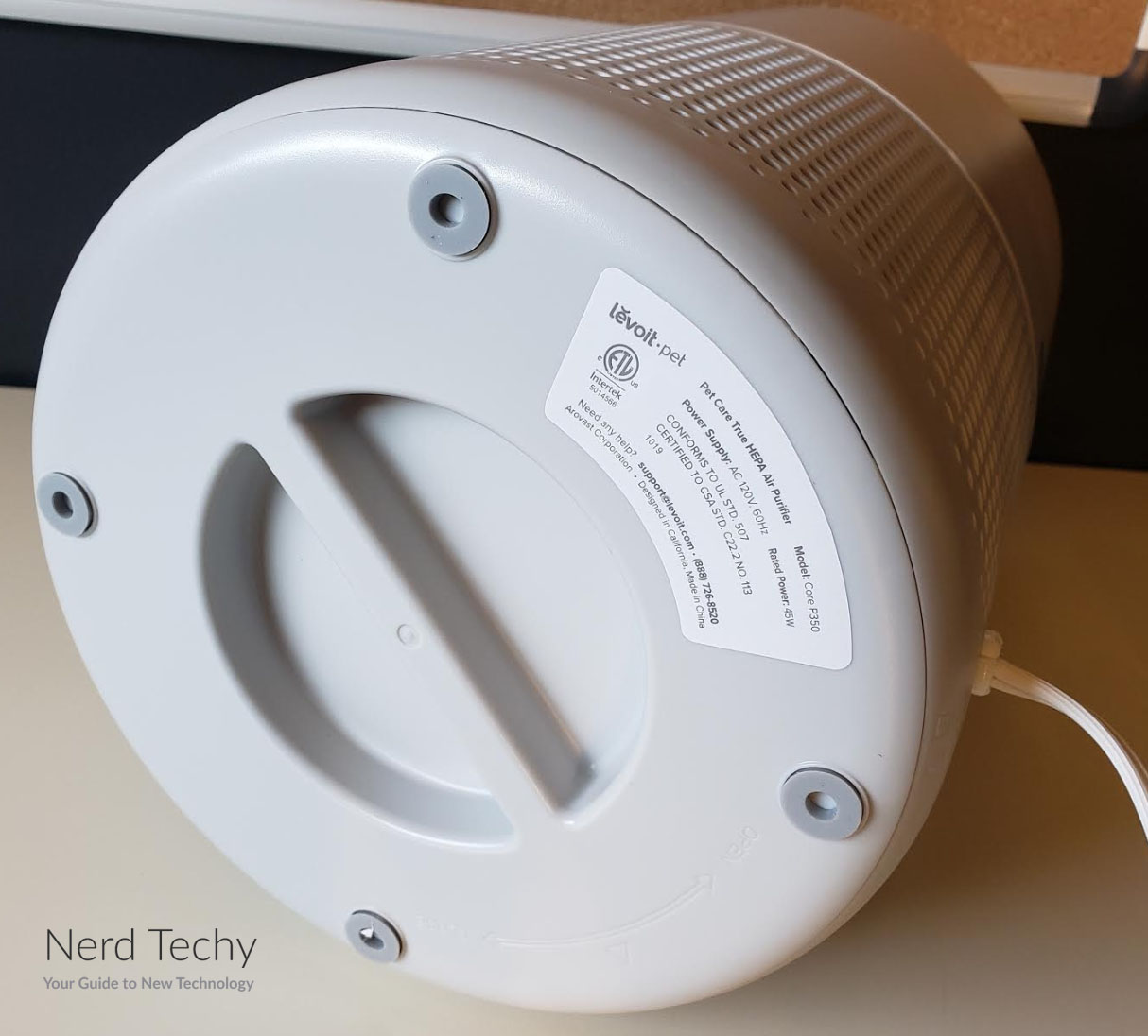 The Core P350 also features a “lights off” mode for nighttime use. Press the lower right button, and all the LEDs will turn off. This provides a peaceful environment for sleeping. It’s also best to lower the fan speed overnight. At the lowest speed, it produces only 24dB of sound, which is barely audible. If you have a PC running in the room, it’s about the same volume as an idling PC fan. Even at the highest speed, the Core P350 produces only 50dB of sound. This is quieter than a normal, indoor conversation. In addition, you also get a pet/child lock button. Simply hold this button down, and it will lock out the control panel. To change settings, simply hold the button down again for a few seconds and it will unlock. 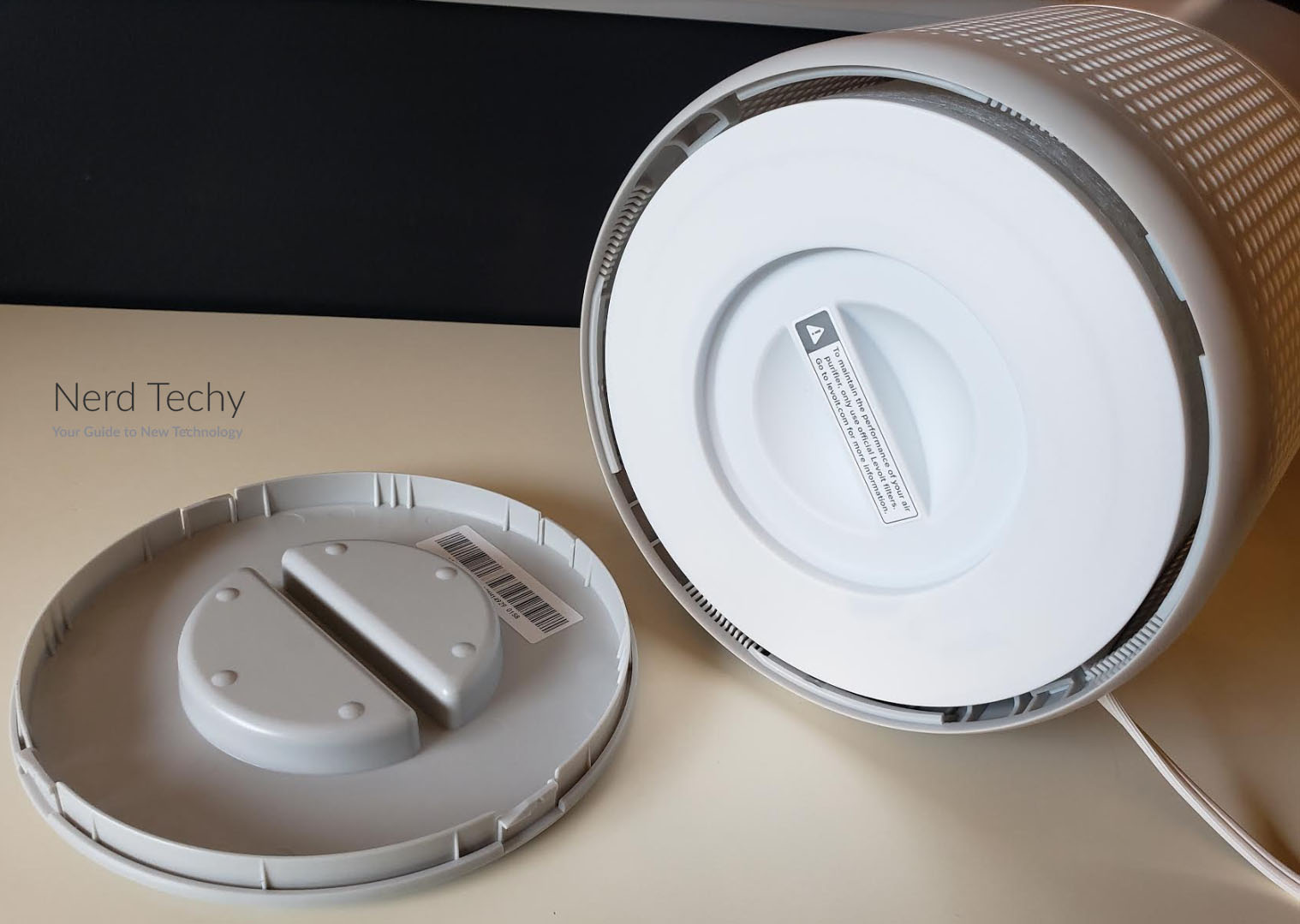 The Core P350’s filter will need to be changed approximately every six to eight months. The exact time will depend on how much you’re using it and how dirty your air is. To change the filter, simply twist the top of the unit off of the base. It separates easily at the white band in the center. The filter itself is a one-piece unit, and is easy to change. Take out the old one, drop your new one in, and you’re good to go.

With all of this being said, you might prefer a more powerful filter. 219 square feet is sufficient for one or two rooms. But to treat an entire floor, you’re going to need more power. In that case, consider the Levoit LV-H132. It’s actually smaller than the Core P350, and it covers up to 750 square feet. 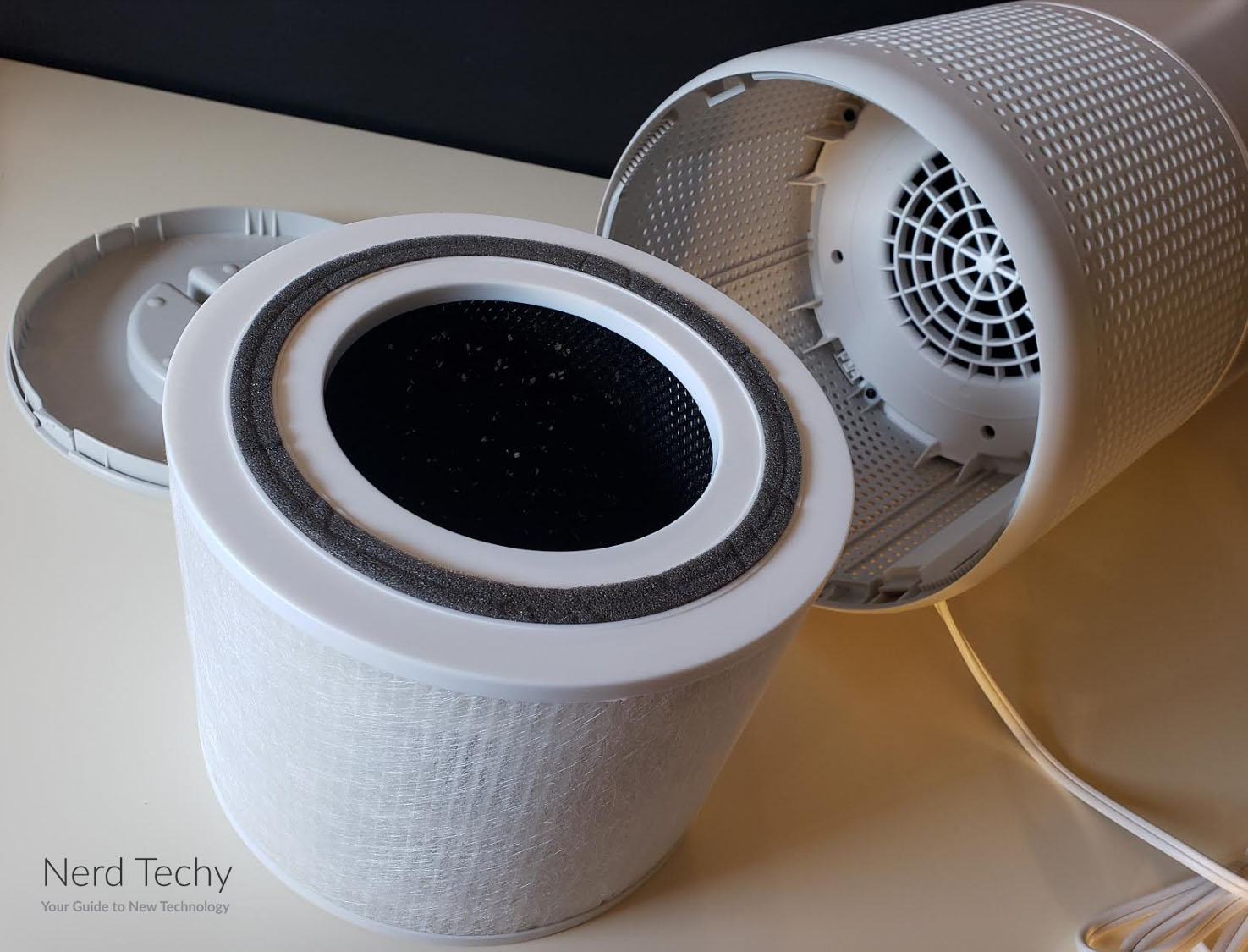 The Core P350 has a 3-in-1 filter, which is housed inside an outer pre-filter. In this case, the pre-filter is the outer grill itself. This grill will trap large animal hairs, dust bunnies, and any other large objects. Make sure to wipe it down frequently, because it can and will get dirty on a regular basis. This can be done easily with a damp cloth. 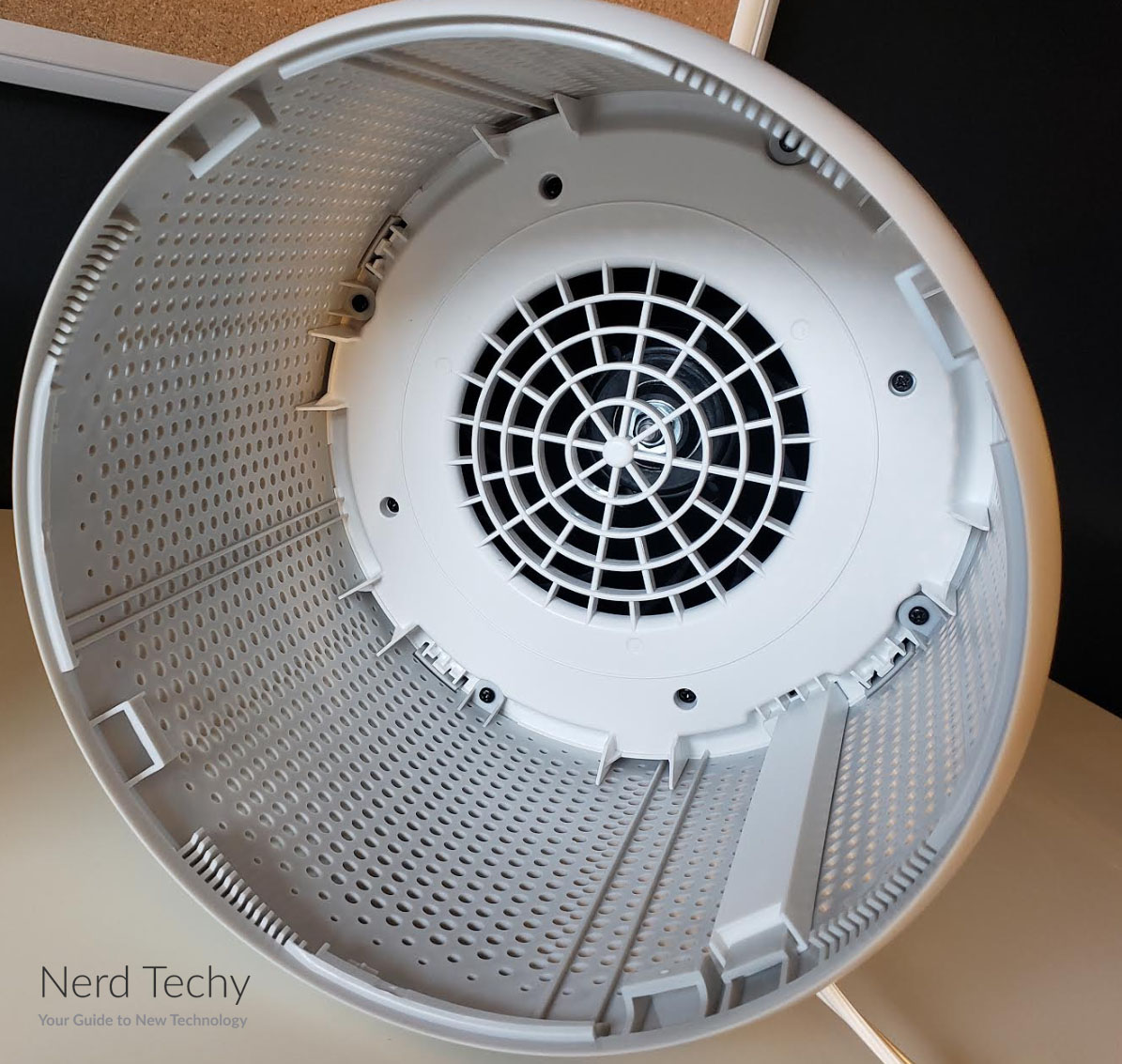 What Does the Levoit Core P350 Remove?

So, what does the Levoit Core P350 actually remove from your air? To begin with, let’s look at the HEPA filter. The HEPA filter will remove virtually all airborne particles, even particles as small as 0.3 micrometers. This includes dust, dust mites, mold spores, pollen, and cat dander. It also includes the majority of bacteria, and even some larger viruses. It also removes smoke particles, whether from tobacco or from cooking. In other words, you’re looking at the majority of allergens in your air. And removing mold spores is doubly effective. First, it gets the allergens out of the air you breathe. Secondly, it prevents the spores from traveling freely and colonizing, creating more mold colonies. 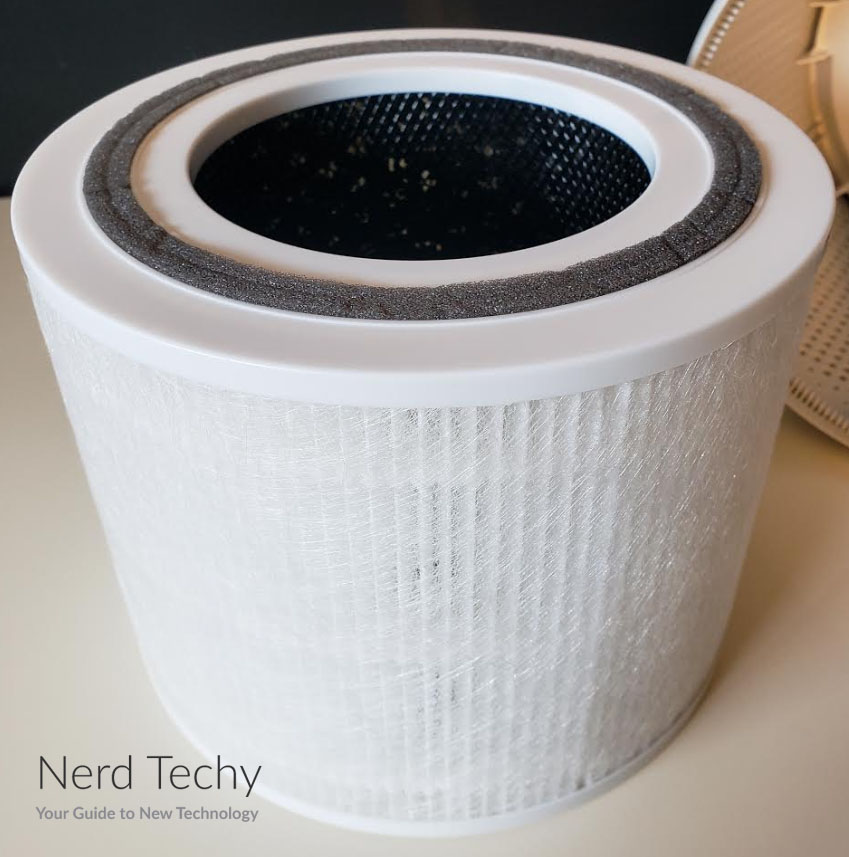 In addition, the ARC compound can help remove many chemicals. This is because it works in concert with the activated charcoal layer. It causes formaldehyde and benzene to break down, making them easier for the charcoal to absorb. These chemicals are commonly given off by upholstery, as well as polyurethane on wood furniture. In addition, the charcoal layer also absorbs many household odors. If you’re struggling with pet odors or smelly food, you’ll notice a significant reduction in these smells. 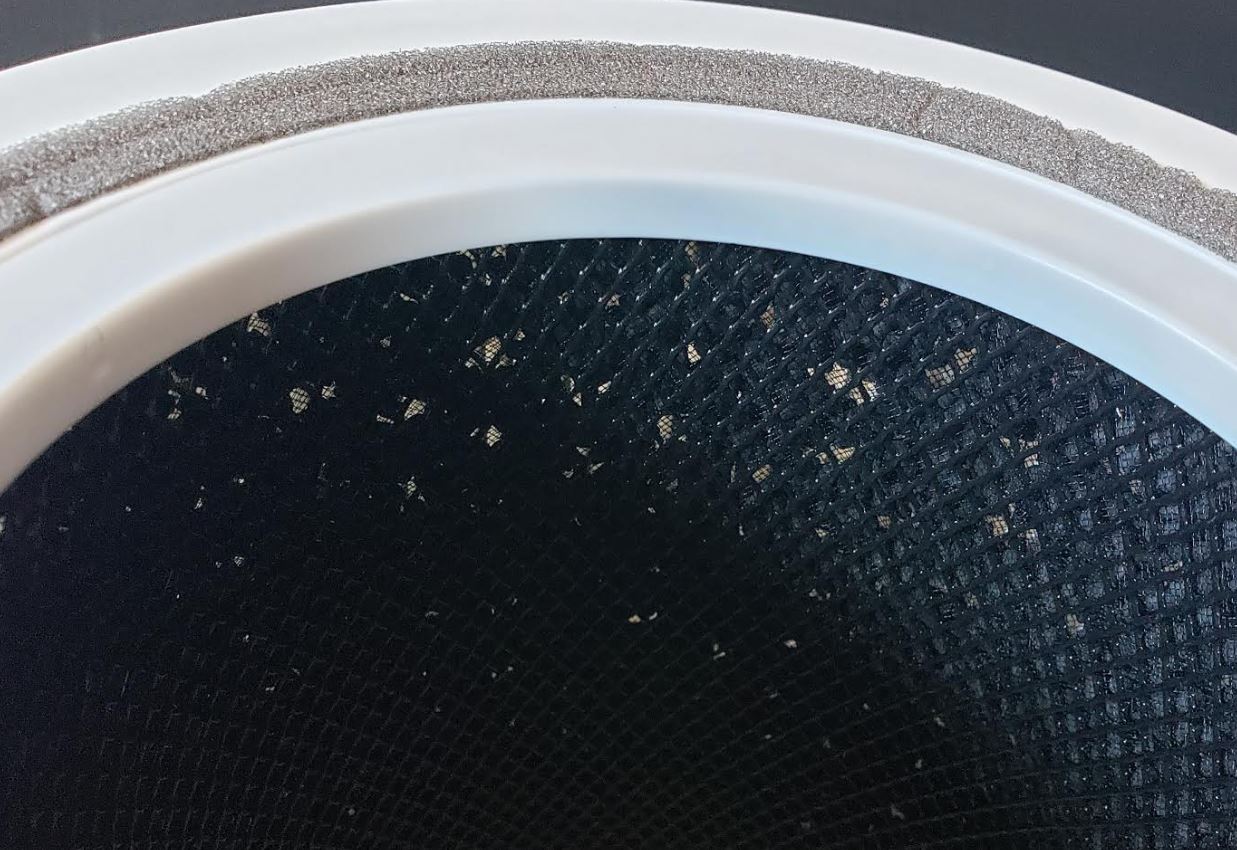 Keep in mind that this type of filter can only do so much. In practice, a number of chemicals, as well as most viruses, will pass through the filter unharmed. This isn’t the Core P350’s fault. It’s just that it’s not designed primarily for this purpose. To remove all chemicals and odors, as well as most viruses, you’re going to want an ozone generator. An ozone generator won’t remove particulates, but it will eliminate virtually every other airborne contaminant. 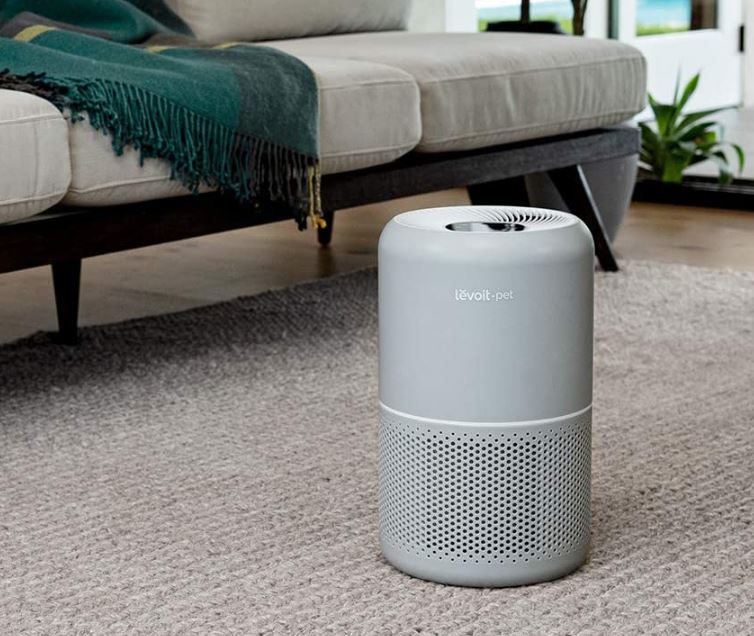 Now that we know everything the Levoit Core P350 Air Purifier does, it’s time for the million-dollar question. Is it worth your money, or should you look elsewhere? Let’s start with its limitations. Specifically, it will only effectively treat about 219 square feet of space. If you need to treat a larger space, you’re going to need a beefier filter. That said, for a bedroom or home office, it’s perfect. And even for a kitchen, it’s useful for clearing the air after a smoky, smelly cooking experience. Run it for a few hours, and your kitchen will regain that fresh “new house” smell.

The control panel is intuitive and easy to operate. You don’t need to worry about deciphering a complex control scheme. Just turn the Core P350 on, and you’re ready to go. The timer mode is also easy to use. Just tap the timer button, and you’ll cycle through different timing options. The pet/child lock is also a nice touch. If you have an inquisitive critter or toddler, you won’t have to worry about them shutting off your filter. Finally, the motor is both durable and exceptionally quiet. When it’s running on its lowest setting, it’s so quiet that you’ll barely even notice it.