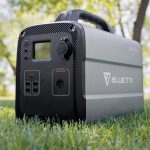 These days, it’s hard to get much of anything done without electricity. Whether you need your computer for work, your smartphone for fun, or your CPAP to stay alive, power is essential. As a result, the portable power bank market is exploding with new, innovative options. But with all of these options, how do you choose which one is right for you?

We’ve reviewed many power banks over the years. Most of these options are small, lightweight power supplies that are meant to charge your smartphone once or twice. This is just fine, as far as it goes. But suppose you need enough power for a laptop? In that case, you’re going to need more power. Not only that, but some devices require an AC outlet. For example, drones don’t require a ton of power to charge, but they typically charge via AC. But suppose you want to run a CPAP machine or a mini fridge? In that case, you’re going to need one of the biggest, baddest power stations on the market.

Today, we’re going to review the MAXOAK Bluetti AC100 Lithium Portable Power Station. This is a big, beefy power station that’s designed to power almost any device. It can even charge from a solar panel when you’re on an RV trip. But is it worth your investment? Or is it a big, beefy dud? We’ll take a look at all the features and benefits. When we’re done, we’ll sum up what we’ve learned, and render a final verdict. Let’s take a closer look, and see what we find! 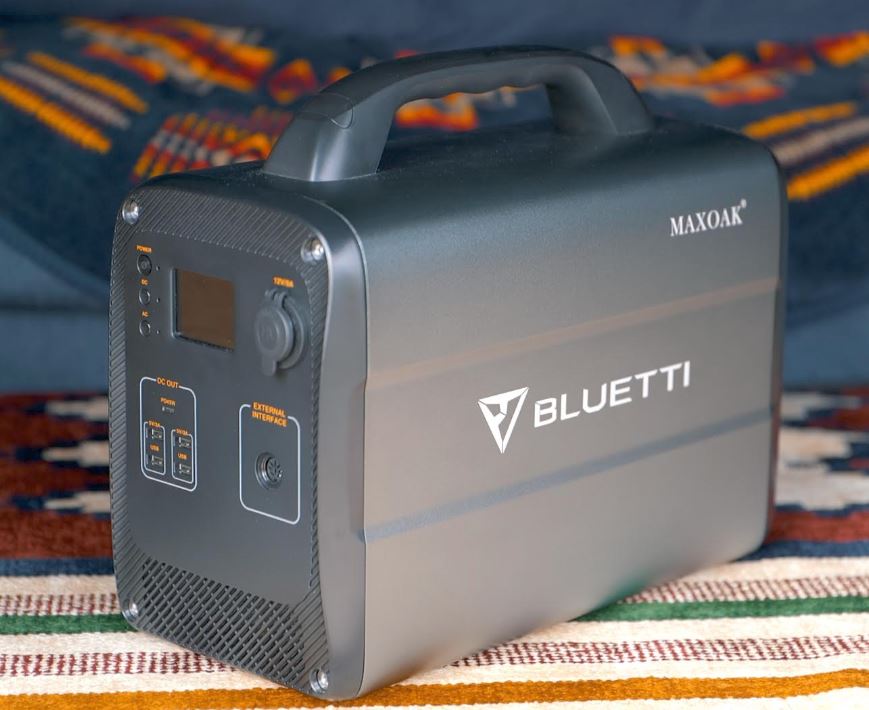 The MAXOAK Bluetti AC100 Lithium Portable Power Station is one big charger. It measures 12.5 inches tall, 15.3 inches deep, and 7.2 inches wide. It’s also fairly heavy, at 34.4 pounds. This can be inconvenient, but it’s necessary. Even a modern, advanced battery adds a lot of weight with this type of capacity. Thankfully, the charger is relatively easy to move. It has a handle on the top with a rubbery grip that’s ergonomic and comfortable. It’s still heavy, but at least you have an easy way to carry it from point A to point B.

If 34 pounds sounds too heavy, MAXOAC makes several smaller portable power stations. For instance, the MAXOAK AC50 is significantly lighter than the AC100. It offers similar power ports, so you get the same functionality. That said, it doesn’t offer nearly as much battery capacity as the AC100. 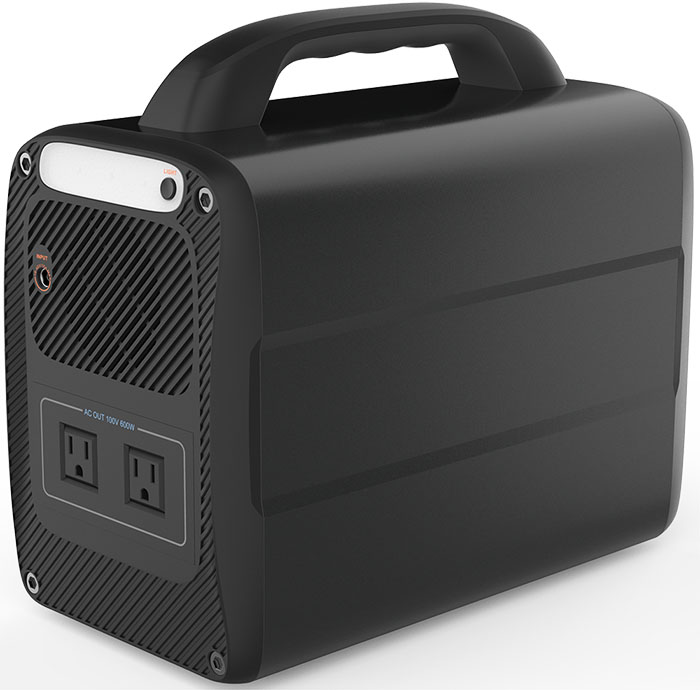 The AC100’s case is constructed primarily from anodized aluminum. This makes it more durable than your average portable power bank. It also provides the support necessary for the large internal battery. The top, sides, and bottom are all an attractive slate grey. On the sides, there’s a Bluetti and MAXOAK logo, emblazoned in a lighter grey font. Both the front and back panels are plastic, but they’re secured with sturdy hex bolts to ensure they stay in place. They’re also vented, which allows air flow for the AC100’s cooling system. Even on a hot day, you won’t have to worry about your power station overheating.

On the front panel, you’ll see a large, bright LCD display. This display is primarily used to monitor the battery level, which is displayed on a five-bar meter. However, there are several other useful features. To begin with, you’ll see an indicator when you’re charging the power bank itself. You’ll actually see how many watts you’re charging at! Similarly, you’ll see separate discharge meters for AC and DC. This way, you can keep track of how much power you’re drawing, so as not to overload your power station. Finally, if anything goes on, you’ll se an error code, which makes tech support much easier. 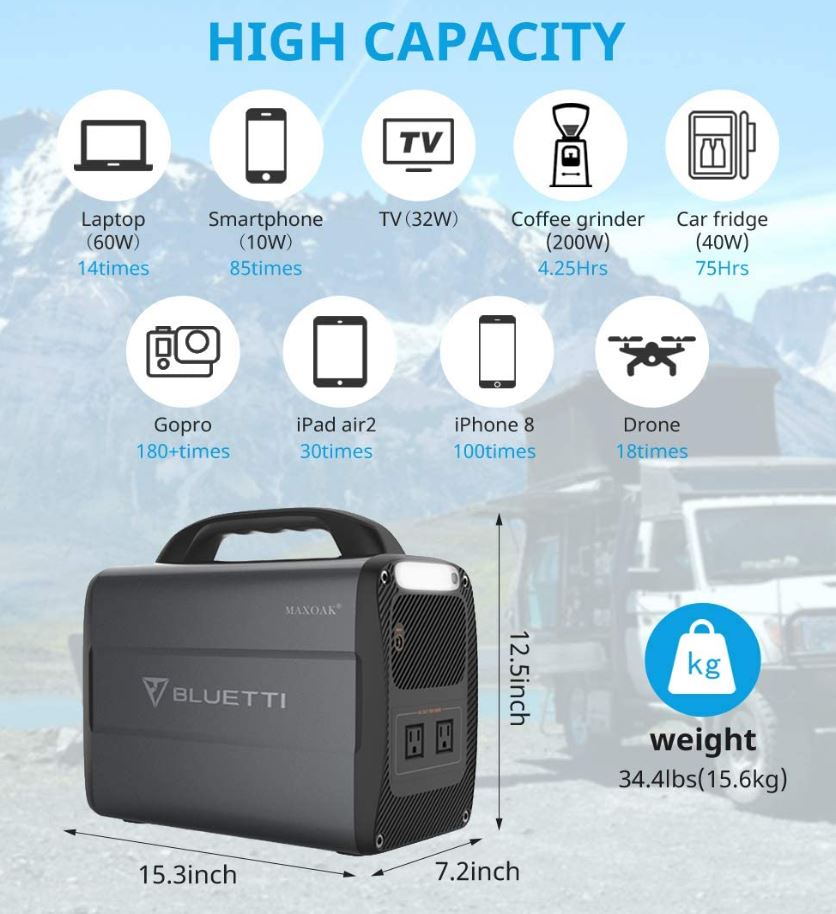 Next to the display, there are three buttons. The top is a power button, and the next two activate AC and DC charging respectively. Each button is paired with an LED light, which lets you know whether it’s on or off. To the right of the display, there’s a 12-volt DC output that’s compatible with car cigarette lighter chargers. Underneath, there’s a small panel with five USB ports. The top port is a USB Type-C 45-watt port, while the other four are standard USB Type-A. To the right, there’s an external port that’s similar to an XLR connection. This port won’t be useful for most consumers. However, it’s useful for technicians to diagnose and fix any firmware issues.

On the back panel of the AC100, you’ll find a pair of AC outlets. These outlets have a three-prong design, so you can plug in just about any device. Above those outlets, you’ll see a power port for charging the AC100 itself. The easiest way to charge is with standard AC power, and an adapter is included for this. However, there are also other options. There’s an adapter for plugging into your car’s cigarette lighter outlet. There’s even a charging cable adapter for MC4 power, for connecting your AC100 to a solar panel.

Above the power port, you’ll see an LED light bar. The light bar can be set to two brightness settings. On the high setting, it’s suitable for illuminating a very large area. On the low setting, it’s ideal for smaller areas, such as the inside of a tent. There’s an additional SOS setting to signal for help. You can cycle through these settings with a button on the right side of the light bar. 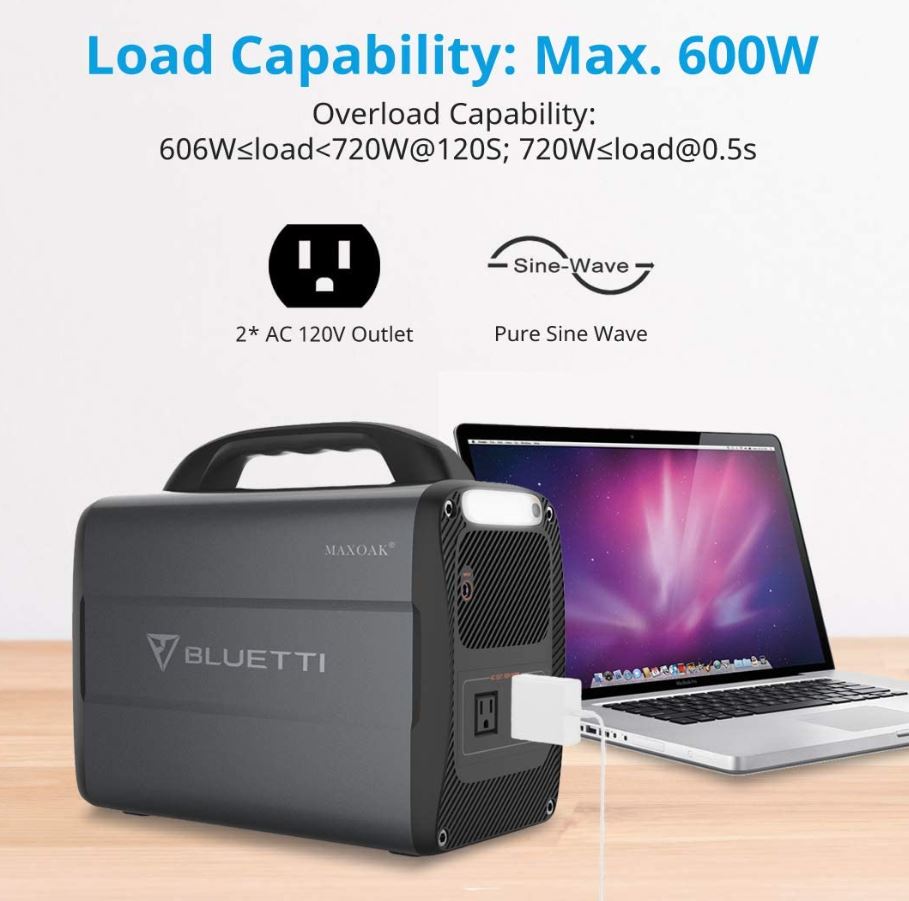 In addition to the AC100 power station and adapters, you also get a few bonus items. First off, you get a carrying bag. This isn’t for carrying the power station itself; you have the built-in handle for that. However, the carry bag is great for carrying your power station, along with the power adapters. You also get a user’s manual, a certificate of qualification, and a warranty card. Make sure to fill out this card and return it, so you can take advantage of MAXOAK’s 12-month manufacturer’s warranty.

So far, we’ve established that the MAXOAK Bluetti AC100 Lithium Portable Power Station is big and full-featured. But how well does the battery perform? First off, let’s take a look at the battery’s power rating. It has a total capacity of 270,270mAh. To put it mildly, that’s absolutely insane. It’s enough to recharge an iPhone X more than 75 times! Of course, if you’re using it for larger devices, you’re going to need that kind of power. The overall rating is 1,000 watt-hours, which, again, is virtually unheard-of. The only downside here is that a power bank of this size is not TSA-approved for air travel. To fly with it, you’ll need to get a waiver. And even then, you’ll need to discharge the battery first.

If you’re looking for a flight-worthy power station, check out the Bluetti MAXOAK AC10. It “only” has a 26,756mAh capacity, but it still supports AC charging. Best of all, it’s TSA-approved for air travel, so you don’t need to worry about taking it on your next adventure. 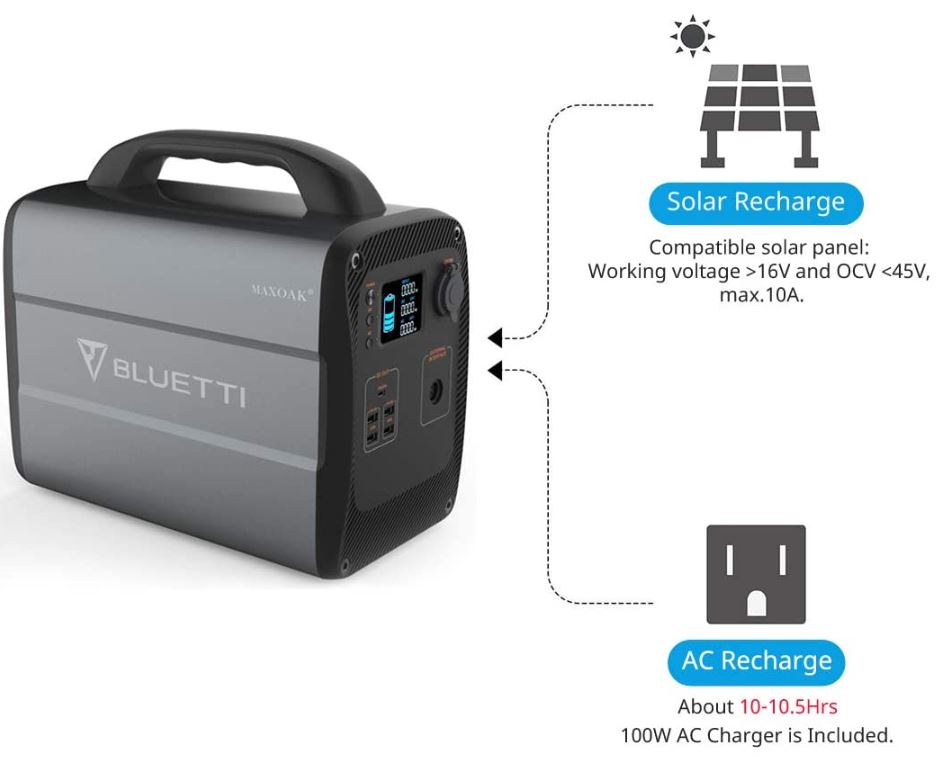 The AC100’s maximum power output is 600 watts. As a result, you can mix and match several devices. There’s also a maximum peak draw of 720 watts. This is useful for devices like mini fridges, which have a low power draw, but a high startup wattage. Be careful pushing this limit, though. If the power spikes over 600 watts for more than two minutes, the AC100 will automatically shut off. In addition to this safety feature, you also get protection from overvoltage, overcurrent, and short-circuits. There’s even a temperature shutoff. With the powerful internal cooling fans, this shouldn’t be necessary. But it’s nice to have protection, just in case.

The battery is a Lithium polymer LG battery cell, and is automobile-grade. It’s rated for 2,000+ cycles, so you’ve essentially got a power bank that you can use for your entire life. When recharging via AC, you can charge the battery fully in about 10 to 11 hours. This might sound like a long time, but consider how powerful the battery is. In fact, it’s an exceptionally fast charging time. Moreover, you can recharge via your car or RV’s 12-volt power supply. Keep in mind that this method will only get you a partial charge, roughly 50 percent of total capacity. Finally, you can recharge from a solar panel. The exact performance of solar charging will depend on your panel’s voltage. Regardless of your charging method, the power station will automatically shut off when it’s fully charged.

As you can imagine from its large number of charging ports, the AC100 is compatible with most devices. Let’s start with the basics. With the USB Type-A ports, you can charge four smartphones simultaneously. And with the USB Type-C PD charger, you can fully charge a modern smartphone in under an hour. So far, so good. But what about more demanding applications? 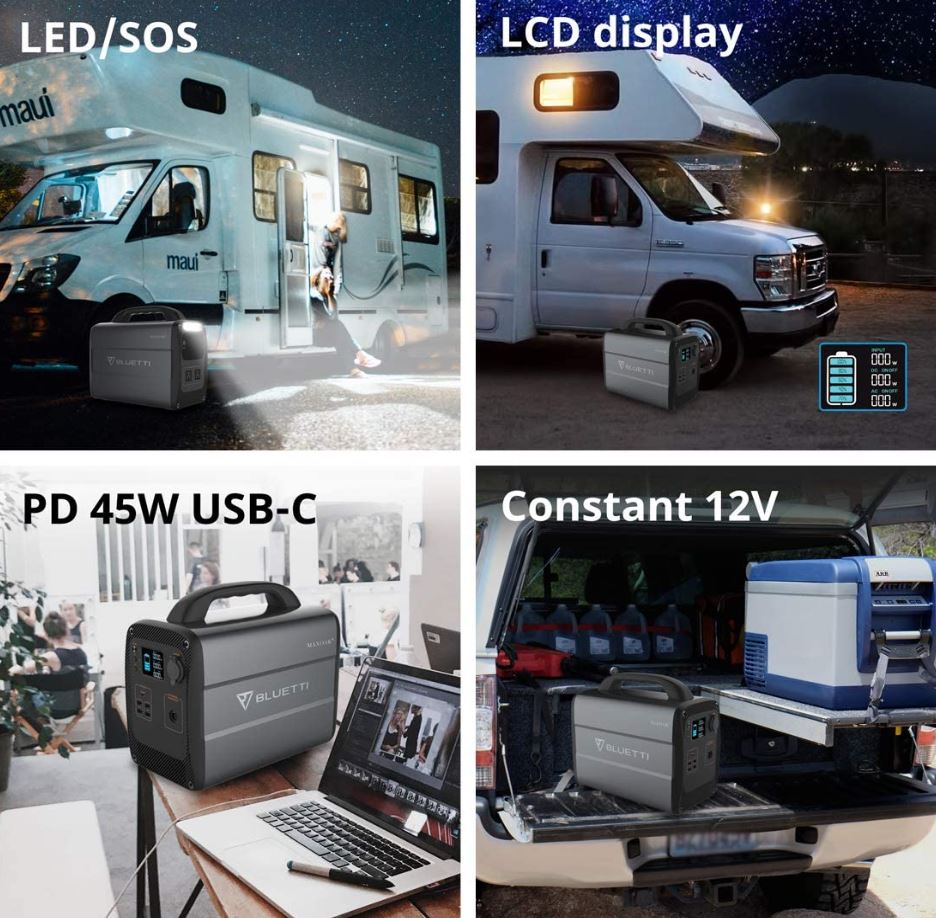 You can charge your laptop while using it by plugging into one of the AC ports. You can also use the PD port, but it won’t supply enough power to charge while you’re running your laptop. In addition, the 12-volt outlet is very useful. You can run a tire pump or an automotive vacuum with no issues. 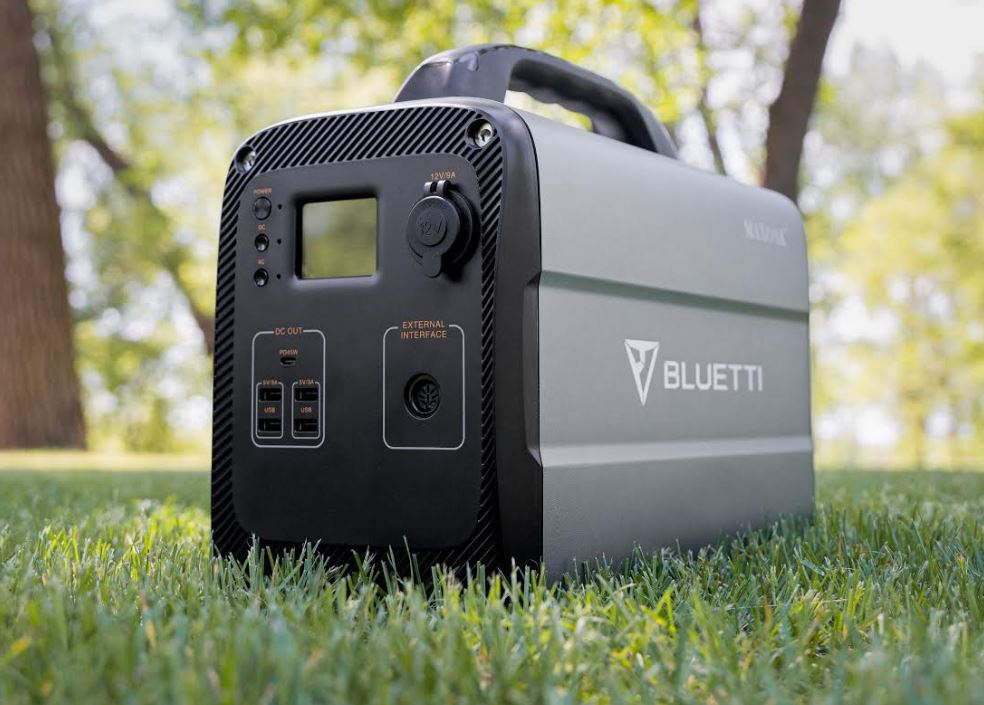 But the AC ports are what make the AC100 most useful. You can run a TV or a mini fridge during a power outage or while you’re on the road. You can charge your drone. You can even run a CPAP machine all night. If you need a CPAP, you’re looking at a great backup power supply for power outages.

The MAXOAK Bluetti AC100 is one of the most powerful, versatile power stations on the market. It’s tough and durable, able to take a beating without easily failing. It has an absolutely insane battery capacity, with enough power to run a mini fridge for 24 hours or more. Not only that, but it’s compatible with just about any electronic device that money can buy.