Dealing with a slow or unstable internet connection can be a frustrating experience. To make things even more difficult, if you want to improve your connection speed you have to check every piece of equipment between yourself and the internet. Between your modem, your router, and your wireless network card, it’s the slowest of the three that determines your fastest possible connection speed.

For the most part, every modern device comes with a high-speed network card. 802.11ac is commonplace even in inexpensive cellphones and laptops. Where most users find trouble is their modem and router.

Instead of having to buy two separate devices, many consumers are choosing to purchase a combination modem and router. Not only will you be able to ensure that your modem and router will work well together, but you’ll be able to avoid any chance of mis-configuration between the two devices.

When it comes to high quality networking equipment, there are very few manufacturers we trust more than Netgear. Their CV7100 Cable Modem / Router combo promises to deliver lightening quick internet speeds and support the latest telecom technology. We decided to take a look at this promising device and see exactly what it can do. Once we explore the features, we’ll find out who could benefit from this device. 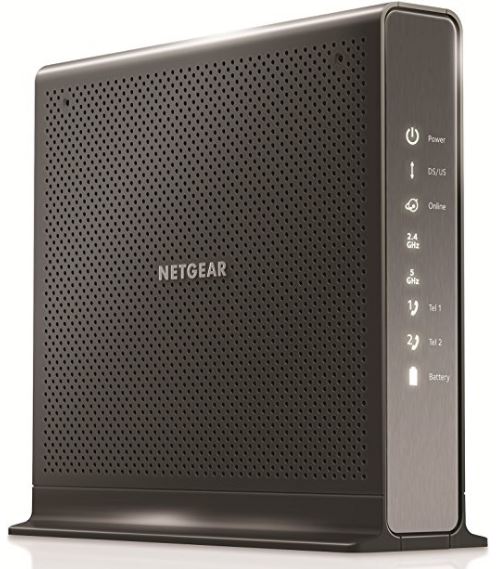 The Netgear C7100V Cable Modem/Router is one sleek looking device. The face of the unit is covered with a brushed aluminum faceplate. When off, it appears like nothing more than a simple piece of metal. But behind the shiny face is several LED notification lamps that are invisible unless illuminated. From top to bottom, these indicators show the power status, communication status with your ISP, whether the internet connection is active or not, local network activity, telephone connectivity, and battery power.

The sides of the unit are fairly plain, with nothing more than some cooling ports and a Netgear logo. The back of the unit has four Ethernet ports, two telephone jacks, two USB ports, and a coaxial WAN port.

The modems job is to connect to your cable internet provider and set up an internet connection. You probably already have a modem, but many of you are likely paying expensive rental fees. What many people don’t realize is that rented modems are usually sub-par. If you want to get the most out of the top internet tiers, you’re going to want something that can support these high speeds.

In this area, the C7100V is no slacker. It supports 24 downstream channels and 8 upstream channels. This means that your total download speed can be up to 960 megabits per second. In layman’s terms, this would allow you to download an entire HD movie in only 15 seconds, assuming a 2gb file size.

It’s important to understand that this modem won’t make a slow connection fast. It just means that you’ll be getting what you pay for. Currently, the upper range of most internet tiers is around 100 megabits. Many consumers find that even though they’re paying for 100-megabit service, their modem can only handle a throughput of around 80 megabits. With this modem, you should have no problem getting the advertised speeds up to 1 Gbps. Even if you don’t have this tier of internet yet, it’s worth considering a modem like this. You don’t want to buy something that you’ll just have to replace in a year when you upgrade your package. By buying the best you can get now, you’ll have something that you can use for many years.

On its own, a modem will only allow a single computer to connect to the internet. The routers job is to take this one connection and share it between all the devices in your household. It can also facilitate communication between local computers.

Since most households have many devices, it’s important to have a powerful router. With a poor router, users will often find that the entire household suffers when one or two people are doing something bandwidth intensive like gaming online or watching Netflix.

Fortunately, the router inside the C7100V is based on the high end Netgear Nighthawk platform. While it doesn’t quite meet up to the standard of the current top-of-the line router, the Nighthawk X10, it comes pretty close. The router is capable of communicating on both the 2.4 Ghz and 5Ghz channels, with a total throughput of 1900 Mbps. This balances out to be 1300 Mbps on the 5Ghz band, and 600 on the 2.5 Ghz band.

Many laptops on the market can use both these channels simultaneously. Almost all of them can use either the 5Ghz or the 2.4 Ghz bands. A few old ones are only capable of 2.4 Ghz. Regardless which devices you have, the router should have no problem helping you get the maximum connection speed your devices are capable of.

The router is also capable of producing a network with better range than most routers on the market. It can do this through a technology called beam forming. Generally, wireless internet radiates out from the router in a circle. The maximum range is the same in any direction. But beam forming allows the router to direct the signal towards your devices. This creates dead areas where there is nobody using the internet, and enhances the signal in that direction. If network users are spread evenly throughout the house, your range will be no better than any standard router. But if users congregate in a few specific areas (for example, in the living room and bedrooms) you’ll notice a significant improvement. 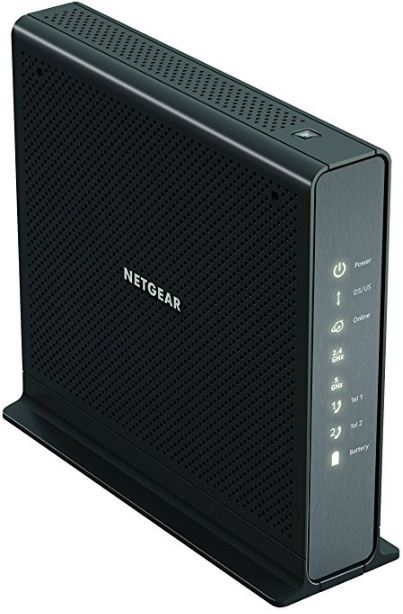 One of the unique things about this modem is that it supports Comcast’s voice service. Most modems require you to purchase a separate box or adapter from Comcast, but you can just plug up to two telephones directly into the router to use their VOIP service.

Many consumers shy away from 3rd party VOIP units as they often don’t support all of the Comcast specific features. Fortunately, Netgear managed to work out a deal to make their device fully compatible. This means that you can use Caller ID, Call Waiting, and any other feature that’s included in your package.

VOIP is generally much better than the copper telephone system. But the one disadvantage is that it requires power. If your power goes out, so do your phones. This is the last thing anyone wants in an emergency situation, but Netgear has a solution. They sell a separate UPS kit which provides battery backup. This gives you up to 24 hours of phone and internet service, which should be more than enough in most scenarios.

Currently, the Netgear C7100V is only available with Comcast. One of the nice things about this particular modem is that you don’t have to call in to activate it. Just log into your Comcast account with your existing modem, enter a couple numbers off the back of the new modem, then swap them. It doesn’t get much easier than that.

Historically, most of Netgear’s modems have been compatible with multiple carriers, even when they only worked with Comcast upon launch. This is a possibility with the C7100V, but there are so many Comcast specific features that it’s possible this may be an exclusive device.

While the 1 Gbps Docsis 3.0 standard this modem runs off is currently the best on the market, Docsis 3.1 is just around the corner. With this in mind, it’s possible that this modem could be replaced by a faster standard in two to three years. 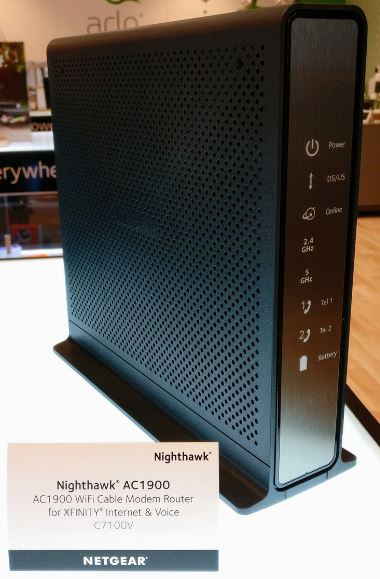 If you’re looking to take advantage of Comcast’s just-announced 1Gbps internet tier, this modem is the best way to do so. The fact that it’s paired with a high-end router is just the icing on the cake.

Is it the fastest modem on the market? Unfortunately, it isn’t. That award goes to the Netgear CM1000. But it’s worth considering that the 1Gbps Docsis 3.0 internet connection is currently the fastest available. If you were to buy both of these routers today, you wouldn’t see any difference between them aside from the fact that there is no router in the CM1000. In our eyes, that makes the C7100V a very reasonable purchase.

What if you’re not on Comcast? At the moment, you’re not going to be able to use this modem. We recommend checking out our guide to the best Cable Modem / WiFi Router Combos.

Already have a high-end router? In this case, it might be a waste of money for you to buy a combo unit. Instead, you can check out the CM700. This is the modem-only version of the same platform we looked at today.