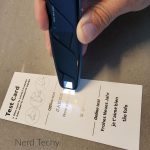 A good scanner is an essential tool when you’re archiving documents. But traditional scanners are big and clunky. They’re not convenient to take with you on the road. A pocket-sized scanner might not be the best choice for bulk archiving. But if you want to capture a few lines of text here or there, it can be a powerful tool.

With modern technology, a small scanner can be even more versatile. OCR technology can recognize text and store the actual text instead of a picture of it. Compare that with AI translation capabilities, and you can scan text in one language and output it in another. That’s a great feature for anyone who does business internationally.

We’re about to review the NEWYES Dictionary Scan Reader Translator Pen. This is a handheld scanner that can translate between 112 different languages. But is it going to be the right choice for you? To find out, we’ll need to dig a lot deeper. Let’s get started! 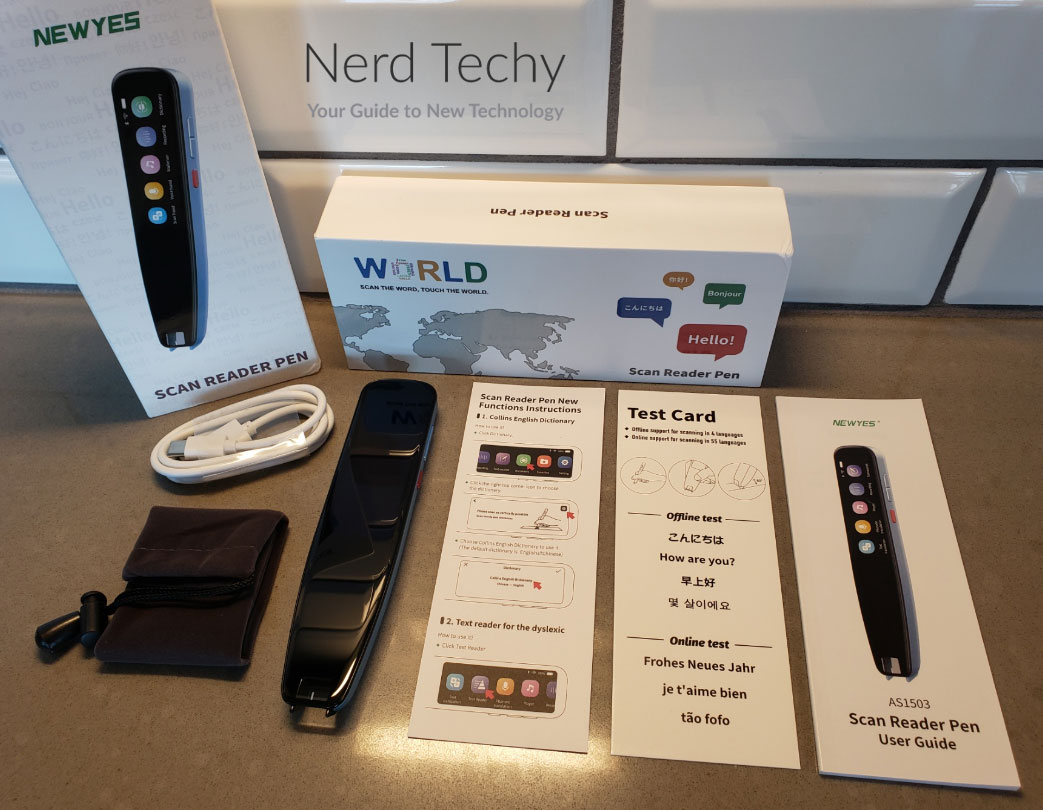 The NEWYES Scan Reader Pen has an attractive baby blue plastic housing. It’s wide and flat, measuring 5.9 inches long, 1.25 wide, and 0.5-inch thick. That’s compact enough to slip into your pocket. And at just 6.8 ounces in weight, it doesn’t feel too heavy when you’re carrying it. 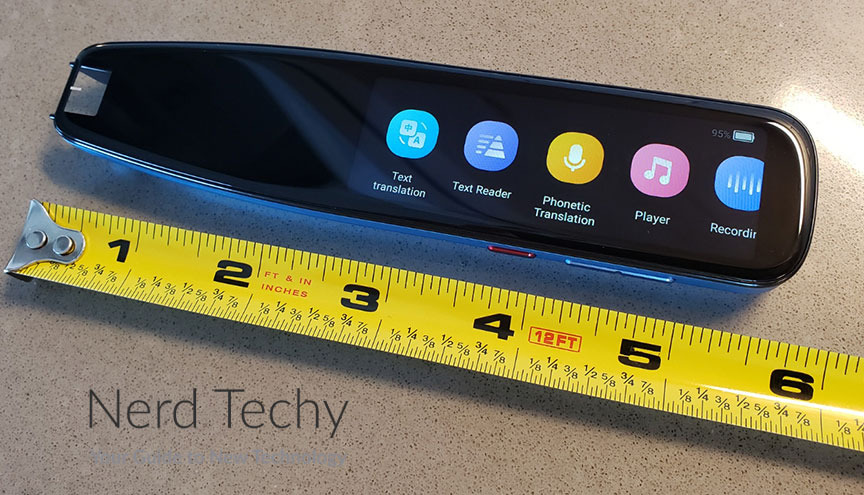 The ends and corners are rounded, so the scanner won’t jab you while you’re carrying it. On the back, near the top, is a set of holes that cover the speaker. The housing is slightly tapered towards the tip, where there’s an opening for the scanner mechanism. A set of thin plastic rails form a visible outline of what you’re scanning, so it’s easy to line the pen up. And the opening is wide enough to scan very large font sizes. 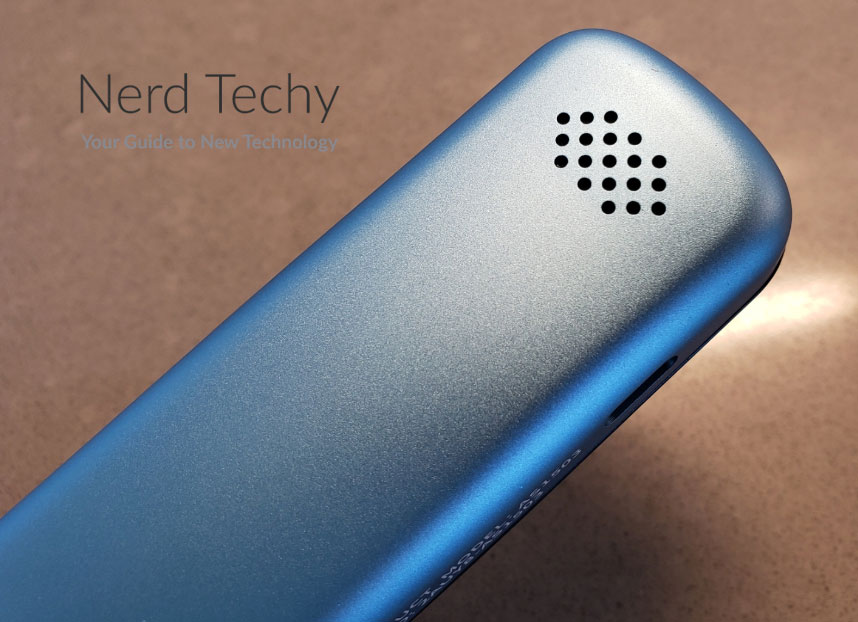 On the front of the housing is an attractive touchscreen display with a colorful menu. The pen actually runs a version of Android OS, and the interface is pretty intuitive. The screen will show your battery level, along with your WiFi and Bluetooth status in the top corner. Most of the display is occupied by a single row of icons where you can access the various functions. You can swipe the screen to reveal more icons. 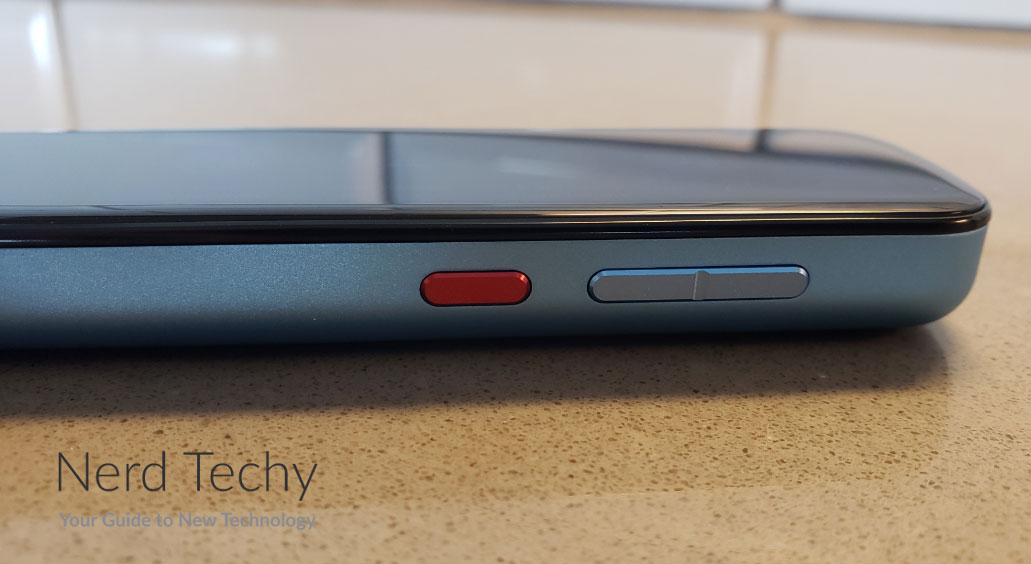 In addition to the touchscreen, there are three physical control buttons on the side of the housing. The two flat blue buttons are used to control some of the scanning features. The more prominent red button is used to activate scanning. Press and hold it to scan, and release it when you’re finished.

If you want something a little more robust, check out our list of the best portable document scanners. They’re big enough for slots where you feed the paper through, and they can capture images. But while they’re much smaller than traditional scanners, they’re too big to fit in your pocket. 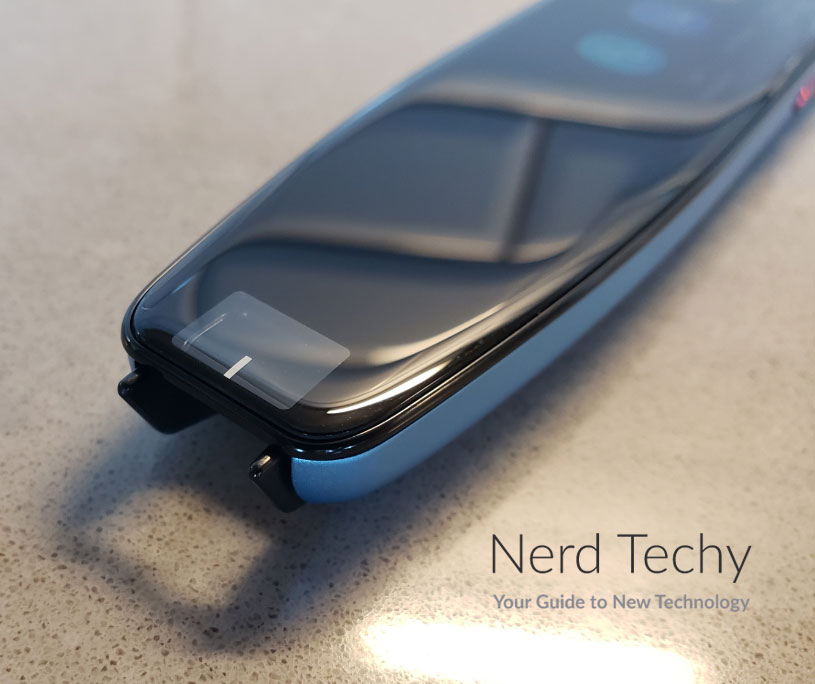 The NEWYES scanner utilizes optical character recognition (OCR) technology. This means that it can visually recognize printed text. When it sees the letter “A,” it doesn’t just encode a set of pixels that matches the image. It actually encodes the letter “A.” This technology is 98% accurate, which means that every once in a while you’ll get the wrong letter. Usually this is easy to decipher. For example, a small “l” might encode as a capital “I” or the number “1.” 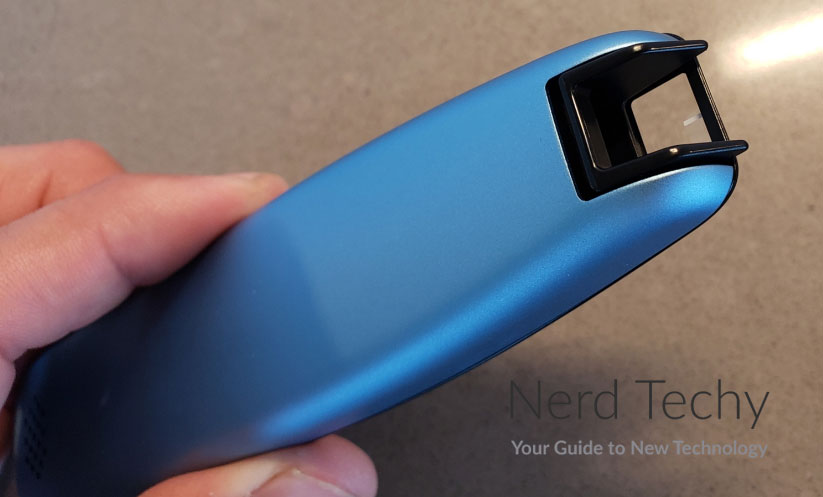 Even with this high rate of accuracy, the scanner can capture up to 3,000 characters per minute. You can scan one line at a time or continuously scan multiple lines into the same document. When you finish scanning one line, you’ll have two seconds to begin scanning the next. This allows you to scan an entire document or article into a single file.

If you want a little more versatility, consider the Ambir TravelScan Pro. It’s a portable stick-shaped scanner that you swipe over the entire page. It can even export your document as a JPG or PDF file. But it’s still larger than the NEWYES scanner, so it’s not quite as portable. 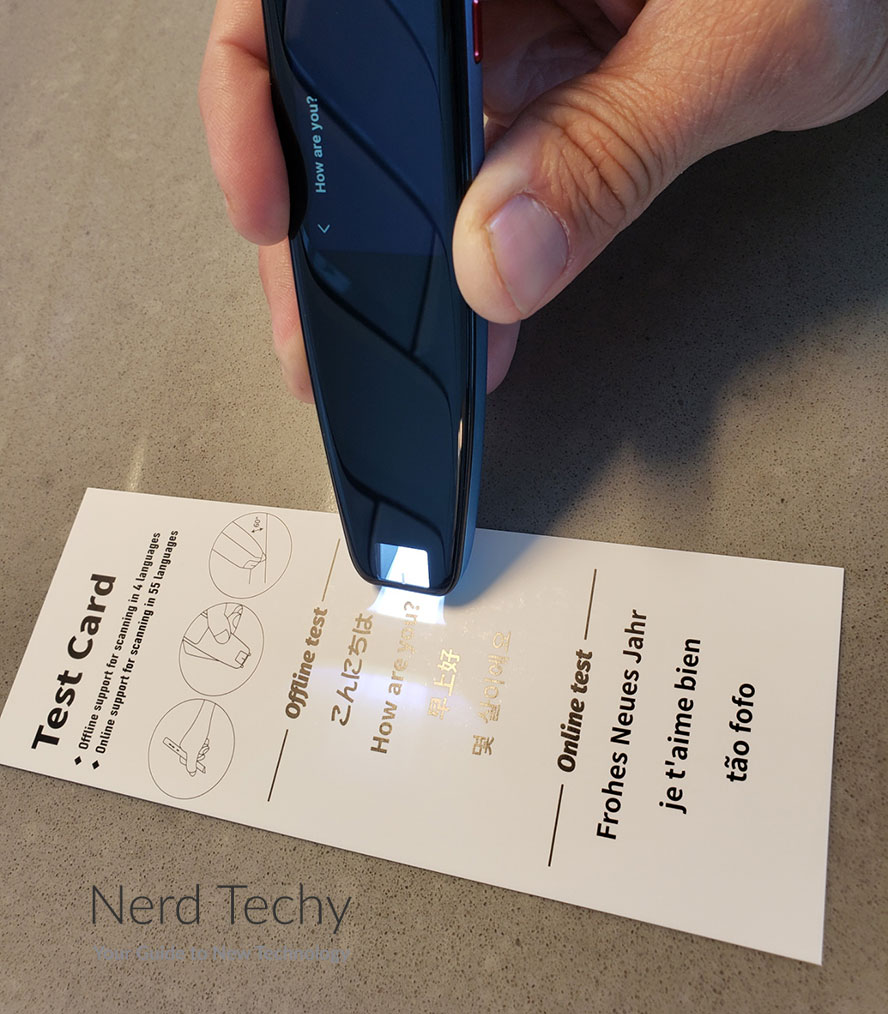 In addition to scanning, this pen is capable of reading text out loud as you scan. This can be used for any number of applications. For one thing, it’s handy if you have poor eyesight and you’re trying to read very fine print. It’s also useful for children who don’t know how to read yet. If you don’t have time to read to them, the scanner will do it for them.

NEWYES has also developed a special dyslexia mode. This mode is brand new, and wasn’t available on earlier versions of the pen. With dyslexia mode, you can adjust the speed at which the voice reads back your text. You can shorten or lengthen the pause between individual words. You can even adjust the length of the pause after punctuation. 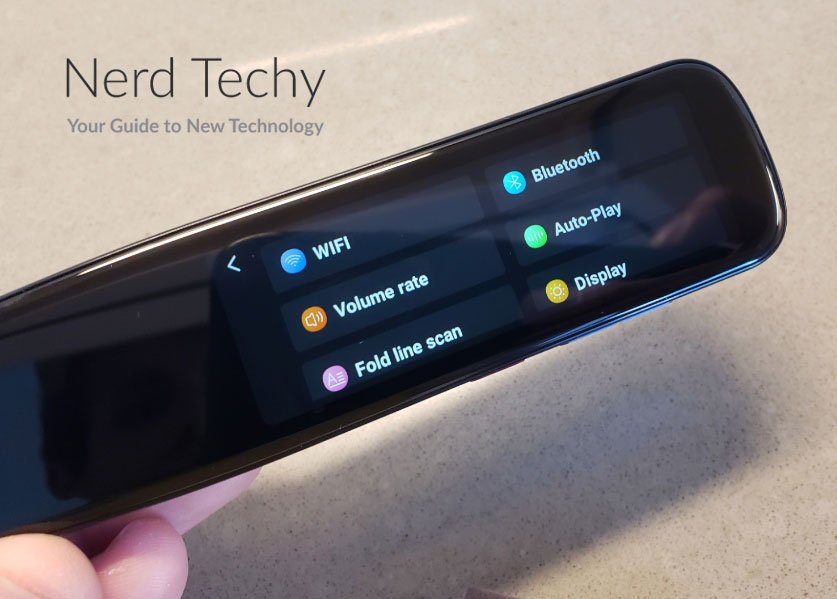 As we mentioned, the NEWYES scanner is also a translator. How exactly it works will depend on what you’re trying to do. If you’re offline, the capabilities will be somewhat limited. You’ll be able to translate back and forth between English, Chinese, Japanese, and Korean. For example, you could scan Chinese text and the scanner would read it aloud in English. Along the same lines, you can scan text in one language and store it in another. This makes it easy to seamlessly translate documents on the fly.

If you’re connected to WiFi, you can take advantage of online translation. For phonetic translation (reading aloud), you’ll get the option of an incredible 112 languages. For OCR translation, you’ll have a slightly smaller selection of 55 languages. But no matter how you cut it, you’ll be able to translate almost any language you’re likely to encounter.

When you’re using the voice translator in English, you’ll have a selection of American or British accents. There might be similar features for other languages, but we can’t be sure.

As an added bonus, the scanner has two built-in dictionaries. The first is a Collins Dictionary of the English language, and the second is their English-Chinese dictionary. Highlight a word on the screen, and you can see its definition in either language. This is a great tool for English speakers who are studying Chinese, or vice-versa. You can read naturally, then tap any word you don’t understand to find out what it means.

If you’re primarily looking for a translator and not a scanner, take a look at the Timekettle WT2 Edge. It’s a pair of white earbuds that look like AirPods. Both people wear one, and the earbuds translate their conversation in real time. 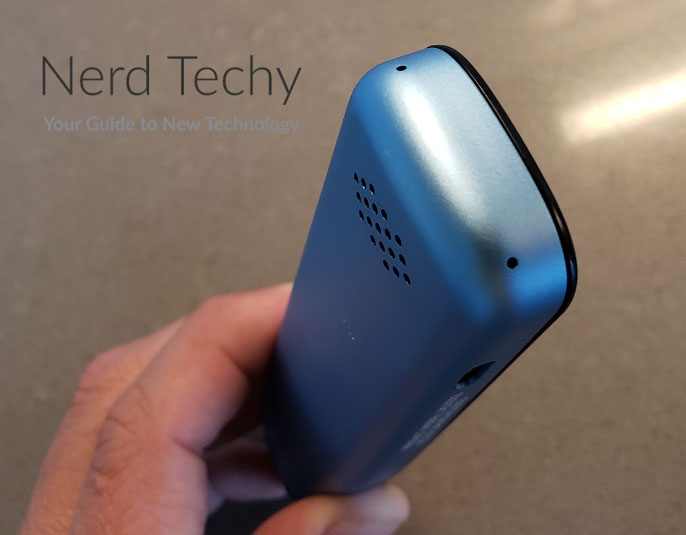 The NEWYES Dictionary Scan Reader has 16GB of internal storage capacity. This might not sound like a lot, but keep in mind that it’s only storing text. When it encodes your data, it’s stored as a simple .txt file. This takes up a lot less space than similar scanners that save data as a PDF or image file. As a result, you can store virtually limitless amounts of text before you have to worry about deleting anything.

You can also transfer the text files to your computer. This allows you to copy it into other documents and use it in other formats. For example, you could scan someone’s business card, then put their information into your address book.

Transferring files to your PC is pretty straightforward. Use the USB Type-A to Type-C cable to plug it in. Your PC will recognize it as an external drive, and you’ll be able to copy your files to your computer.

On a Mac, it’s a bit more complicated. Since the scanner is an Android device, it won’t recognize it as a storage device. You’ll first have to install Android File Transfer, which is a free app. Once you install it, you can then use it to copy your files over.

The internal battery has a capacity of 1,000mAh. That’s enough for three hours of operation, which isn’t all that much. However, that’s three hours of actual scanning. Going over your files or looking up words in the dictionary will draw significantly less power. And in standby mode, the battery will last for more than 180 hours. That’s more than an entire week without being plugged in. 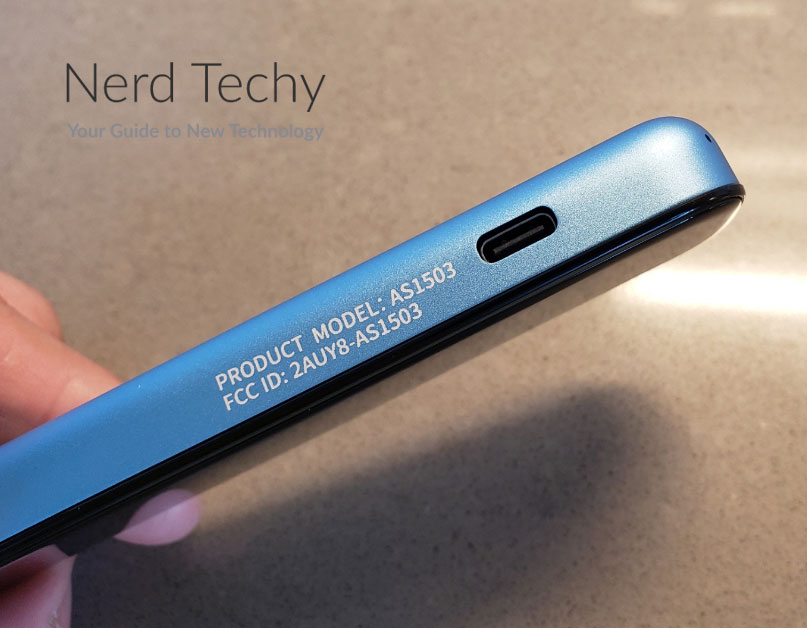 When it comes time to charge, it’s easy. You use the same USB Type-A to Type-C cable you use to transfer your files. Depending on your charger, it can fully charge in well under 90 minutes. In practice, you can plug it in whenever you’re not using it, and you should never be out of charge.

The NEWYES Dictionary Scan Reader Translator Pen is a versatile little device. To begin with, it’s extraordinarily compact. You can keep it in your pocket and take it wherever you go. If you need to scan a business card or a document unexpectedly, you’ll already be fully equipped. We also appreciated the touchscreen display, which makes changing your settings a breeze.

The scanning performance is very good. At 3,000 characters per minute, you can scan large blocks of text in no time at all. And with OCR technology, you can store the data as real text, not as an image. This means you can copy and paste it later and have a searchable file. 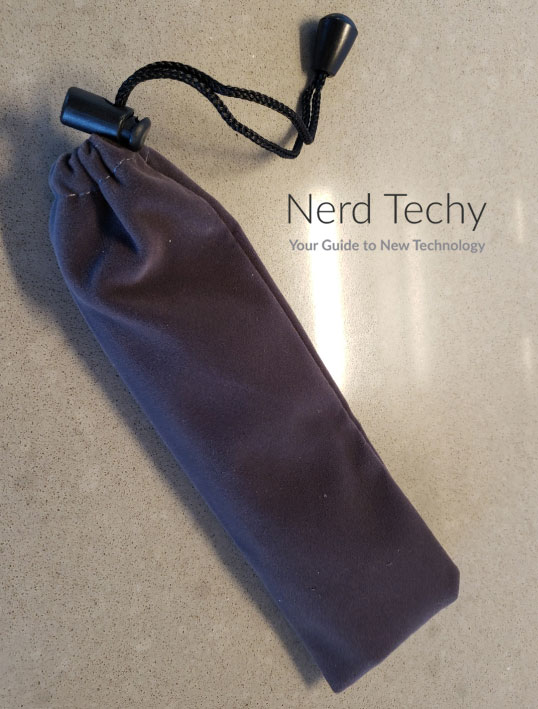 The translation performance is similarly impressive. With support for 112 languages, you’ll be able to understand almost any written text. You’ll also be able to use the OCR function to create complete translated texts, albeit only between 55 languages. That’s still a ton of languages, and should meet any realistic needs.

We also liked how easy it is to manage your files. Since they store in .txt format, they’re very small, and won’t take up a ton of space. Mac users might be annoyed at having to use Android File Transfer, but it’s easy enough to set up. All things considered, this is a nifty text processing tool.