If you listen to music anywhere outside the comfort of your own bedroom, you probably deal with some background noise. Depending on the volume, this can range from a minor annoyance to a serious problem. For example, what if you went cheap and bought a seat at the back of an airplane? The roaring engines are sure to be a problem, even under the best of circumstances. In that case, you’ve probably looked at different noise blocking options. In the world of wireless earbuds and headphones, you get two options: noise canceling or noise isolating.

So, which one of these is the best? In short, neither one. But they each have their own advantages and disadvantages, which we’ll get into later. The first thing you need to know is that they work in fundamentally different ways. Noise canceling earbuds work by actually negating the physical sound waves from background noise. Noise isolating earbuds, on the other hand, work by creating a seal against your ear, blocking out the noise. So how do these technologies actually work? Let’s take a closer look. After that, we can talk about why you might want to choose one over the other. 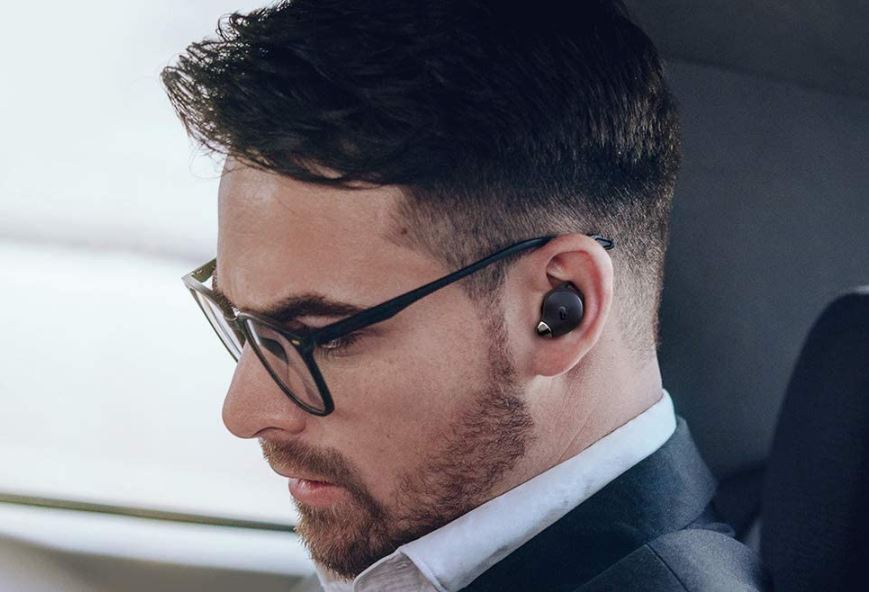 Noise Canceling Earbuds: How They Work

Noise canceling earbuds are generally referred to as “active noise canceling”, or ANC for short. They work by canceling out the sound waves from background noise. How is this accomplished? The answer lies in the nature of sound itself. Sound actually exists as a series of pressure waves in the air. When these waves reach our eardrums, they get converted into sound inside our brains. If there’s no pressure wave, there’s no sound. So what does this have to do with noise canceling?

ANC technology works by literally canceling out the pressure waves that create sound. If you picture a wave form, there are a series of peaks (high points) and troughs (low points). To cancel out the sound, an ANC system simply creates an inverse wave. This wave will have equal, but opposite, peaks and troughs. When the two waves are blended together, the peaks and troughs cancel out. In other words, there’s no wave form. And without a wave form, there’s no sound.

ANC technology requires some additional hardware in order to be effective. First off, it requires additional microphones inside the earbuds or ear cups. These microphones will pick up any noise that’s leaking through into your ears. Next, they’ll send that signal to specialized electronics inside your buds. These electronics will analyze the audio, then create an inverse soundwave that gets sent to the drivers. Needless to say, this extra hardware takes up space. This is why it’s typically only found in over-the-ear headphones. You can still get it in earbuds, but you’re typically going to pay extra. 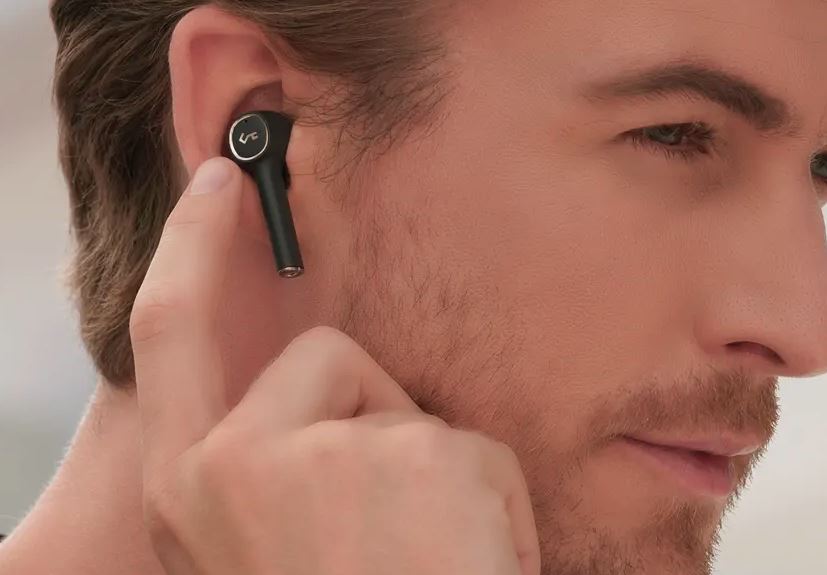 When properly designed, noise canceling technology can reduce ambient noise by up to 20 decibels. In practice, this means an average noise reduction of about 70 percent. There’s a caveat, though. Because the technology is responsive, it’s not terribly effective at blocking sharp, sudden noises. It’s ideal for steady background noise, though. It also causes your battery to drain much faster than it otherwise would. That said, most wireless earbuds and headphones have an on/off switch for the ANC function. Turn it off when it’s not needed, and you’ll significantly boost your rig’s battery life.

As we mentioned, most noise canceling technology is found in headphones, not earbuds. But there are still some good ANC earbuds available on the market. One of these options is the Aukey Key Series T18NC Bluetooth Earbuds. They offer excellent noise canceling performance, along with a convenient neck band design.

Noise Isolating Earbuds: How They Work

With all of that technology built into noise canceling earbuds, you were probably expecting another complex solution. In this case, that assumption is entirely incorrect. As a matter of fact, noise isolating earbuds are about as simple as they come. They work by creating a physical seal against the inside of your ear canal. You can get the same effect by sticking your fingers in your ears, but that’s no way to listen to music. The downside of this method of noise isolation is that it’s not effective for headphones. Ear cups simply can’t create as secure a seal as silicone ear tips. It provides some degree of isolation, but it’s not ideal. 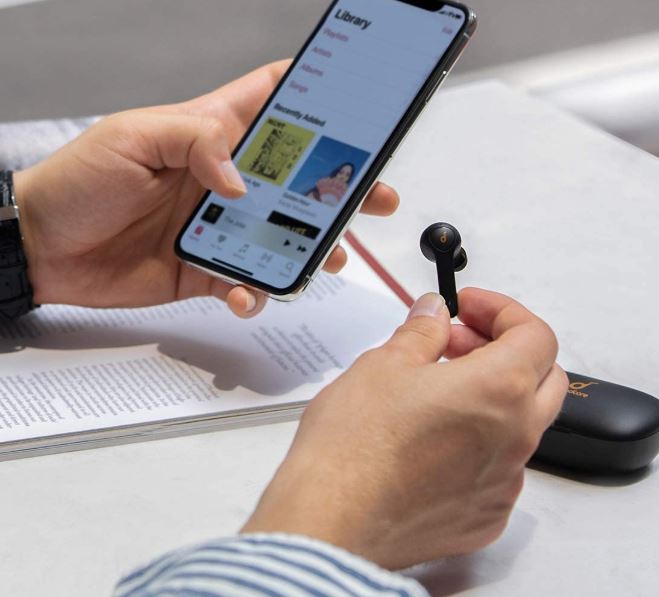 One thing you need to keep in mind with noise isolating earbuds is that they rely on a good, secure fit. If you don’t have a secure seal, they’re not going to be effective. Because everyone’s ears are different, this means you’ll need to fool around a bit with different tips. Thankfully, most wireless earbuds ship with at least 3 different sizes. Swap them around, and see which ones work best for you. Besides which, noise isolating technology is much cheaper than ANC. There’s no extra hardware required. Just some inexpensive silicone ear tips.
In fact, most earbuds use at least some form of noise isolation. It’s pretty much built into the technology. So which ones are the best on the market? There are many good choices, but one standout is the TRANYA B530 True Wireless Earbuds. Not only will you get plenty of noise isolation, you’ll also get exceptional sound quality and good battery life.

Which One is Better?

So, is ANC better than noise isolating? Or is noise isolation the best choice? As with many of these technologies, it depends entirely on what you need. To begin with, if you’re primarily concerned about battery life, noise isolation is the clear winner. ANC will reduce your battery life, requiring more frequent recharges. That said, if you use the on/off switch judiciously, this isn’t much of a problem. Furthermore, ANC is more or less your only option for over-the-ear headphones. If you prefer the richer sound of true headphones, ANC is going to be your go-to option. 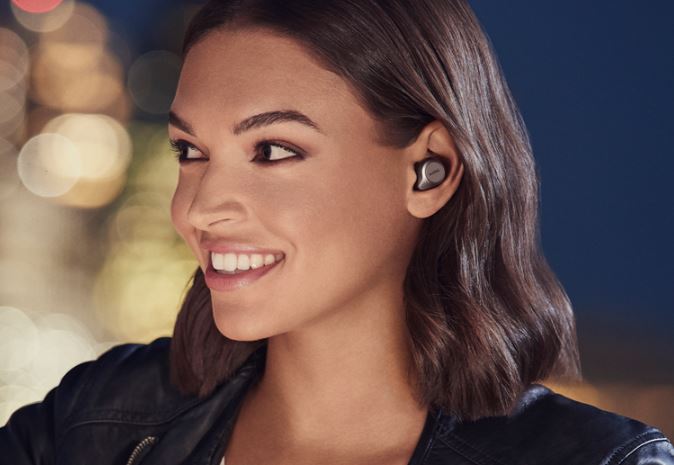 Some people also find noise-isolating earbuds to be uncomfortable. This is because they only work if they form a tight seal inside of your ears. If you don’t get a good seal, outside sound is going to leak in. It’s just inevitable. On the other hand, not many earbuds offer ANC to begin with. You can find them, for a price, but they’re not very common. In addition, the battery issues become even more pronounced with earbuds. You can get around that to some extent with headphones, because of the larger size. But with earbuds, there’s simply no place to store a larger, more powerful battery.

When it comes to effectiveness, both methods of noise reduction are roughly equivalent. They just work via different methods. Once is purely physical, while the other is a more advanced, technological solution. That said, there’s one significant difference. ANC headphones are better-suited for constant, steady background noise. They’re effective at blocking out airplane engines, traffic noise, and wind. Noise isolating headphones, meanwhile, block all kinds of sound. If you’re in an environment with sudden, loud noises, you’ll get better performance. Ultimately, which option is best is going to depend entirely on your own personal needs.