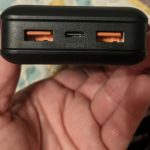 You can’t get much done these days without electricity. As we’ve become more and more dependent on electronics, we depend on reliable power more than ever before. When you’re at home or at work, this isn’t a big deal. Unless there’s a power outage, you just plug in your phone or laptop, and you’re recharged in no time.

But what if you don’t have access to a power outlet? If you’re hiking, camping, or just jostling for an outlet in an airport terminal, things can get dicey. In that kind of situation, a good power bank can save the day by keeping you topped off. But there are a wide variety of power banks, and not all offer the same benefits. For instance, there are small, pocket-sized power banks that can fit in your pocket. However, their small size limits their capacity, and they’re typically only good for a charge or two. Conversely, larger power banks can offer more charges, but at the expense of more size and weight.

The Odec 20W PD Power Bank is a mid-sized power bank with plenty of battery capacity. But size and power are only two of the characteristics you need to consider. You also need to think about the types of power port and the durability of the case. The total wattage is also important, since this determines how quickly you can charge your devices. We’re about to take a deep dive into all of the Odec power bank’s features, along with its pros and cons. Once we’ve given it a thorough evaluation, we’ll be prepared to render our final verdict. Let’s get started! 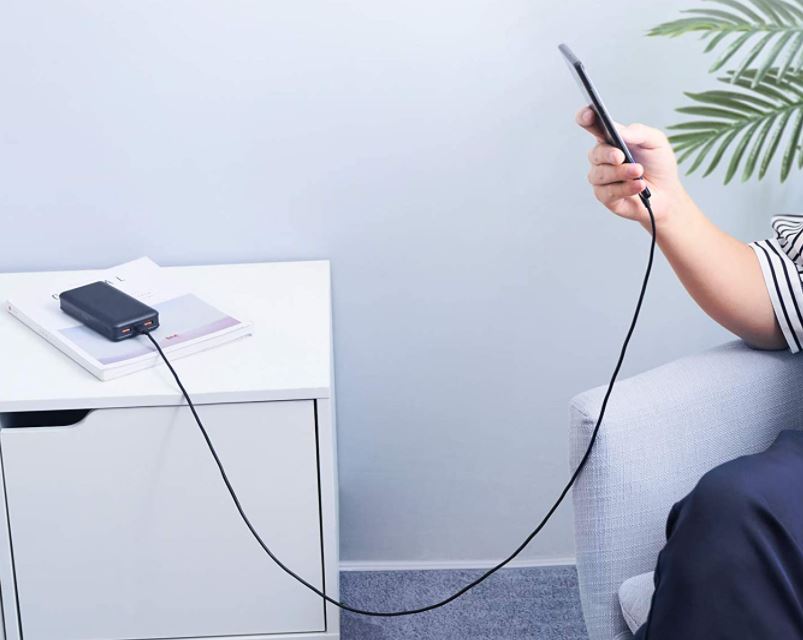 How Does PD Charging Work?

The Odec 20W PD Power Bank, as its name implies, is a PD charger. But what does this mean, and how is it different from ordinary USB? To understand why, you have to understand the origins of USB. USB is short for “Universal Serial Bus,” and was designed for transferring data only. Instead of multiple serial data standards, like you had in the old days, the idea was to have one. The designers never intended USB to be used for power. It was just supposed to simplify data transfer.

But any time you have a copper wire, you have the ability to transfer some amount of power. In the case of USB 1.0, the amount was less than a watt, but it was enough to power very small devices. Manufacturers took advantage of this capability, and the USB engineers took note. Since then, each incarnation of USB has continued to offer more power. In 2000, USB 2.0 was released, and offered 2.6 watts. Around that time, you started to see some USB phone chargers. Wall charging was still more powerful, but USB charging was at least possible. The newer USB 3.1 standard provides up to 15 watts. Apple smartphones use the Lightning standard, based on USB 3.1, which also provides 15 watts. However, their power ports are specially designed to accept up to 20 watts.

That said, 15 watts is not enough to power larger devices like laptops. If you want to do that, you need at least 60 watts, and up to 100 watts for a bigger laptop. That’s where PD power comes in. PD is short for “power delivery,” and is an extra standard used by some USB Type-C ports and cables. PD-capable devices can charge at up to 100 watts, allowing for laptop charging while in use. Even the MacBook Pro 16” draws a maximum of 96 watts, so you’ve got a bit of extra just in case.

Not all PD chargers are capable of delivering a full 100 watts. Similarly, not all PD-capable devices will accept that much. As we already mentioned, iPhones will only accept up to 20 watts. A PD charger or port will automatically adjust the wattage to the maximum safe wattage for the device. Your 20-watt iPhone will charge at 20 watts, while your 7.5-watt wireless earbuds will charge at 7.5 watts. If the device can draw more than the charger can deliver, it will draw whatever the charger’s maximum wattage is. So if you plug a 96-watt MacBook Pro 16” into a 40-watt charger, it will draw a full 40 watts. Note that this will leave it at a deficit of 56 watts. The battery will still drain, just not as quickly as it would without the charger. 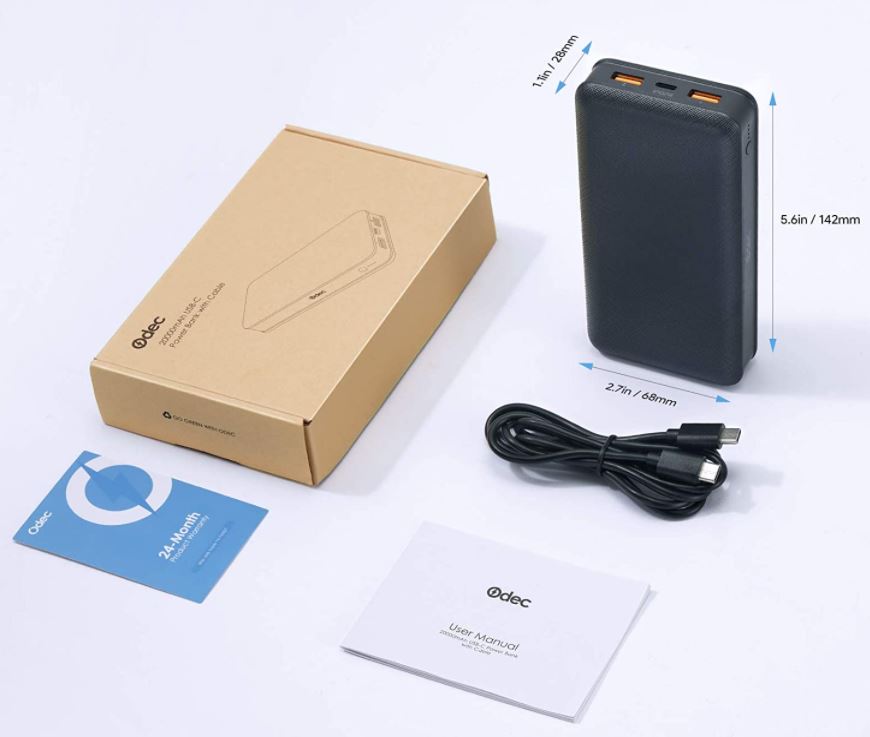 The Odec 20W PD Power Bank is a rectangular power bank constructed from rugged polymer. It has a black outer shell, without a lot of ornamentation. The top and bottom have a crosshatch pattern, which provides a bit of extra grip. It also makes the power bank more attractive to look at, although this is a secondary function. The sides have a smooth finish, which gives them a glossier appearance. All of the edges and corners are rounded, so they won’t damage anything or jab you during carrying. This curved design also contributes to the sleek, attractive aesthetic.

The overall dimensions are 5.6 inches in length, 2.7 inches in width, and 1.1 inches thick. That’s roughly the length and width of a modern smartphone and case, and twice the thickness. The weight is 14.5 ounces, again similar to a smartphone. As a result, the Odec power bank is a bit big to carry in your pocket, but it’s not out of the question. And if you want to carry it in a day pack, laptop bag, or purse, you won’t have any trouble at all. 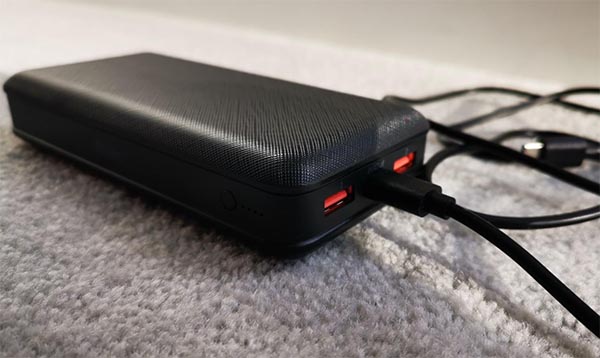 Along one edge of the case, you’ll see a white Odec logo. Towards the front of that edge, there’s a power button, along with a row of four white LED lights. These LEDs indicate the current battery level when the power bank is turned on. The charging ports themselves are located on the front. To the left and right, you’ll see a pair of USB Type-A ports. These ports have bright orange internal tabs, so it’s easy to tell which way to orient the plug. Between them, you’ll find a USB Type-C PD charging port. A four-foot USB Type-C to Type-C charging cable is included in the kit. All of this is protected by Odec’s 24-month manufacturer’s warranty. This protects you from any defects in materials or workmanship.

Of course, there are as many unique designs as there are individual power banks. Among the most unique is the Aukey Basix Pro. This is a stand-up charger that works as a phone stand. It also charges wirelessly, but has only half the total capacity of the Odec charger. 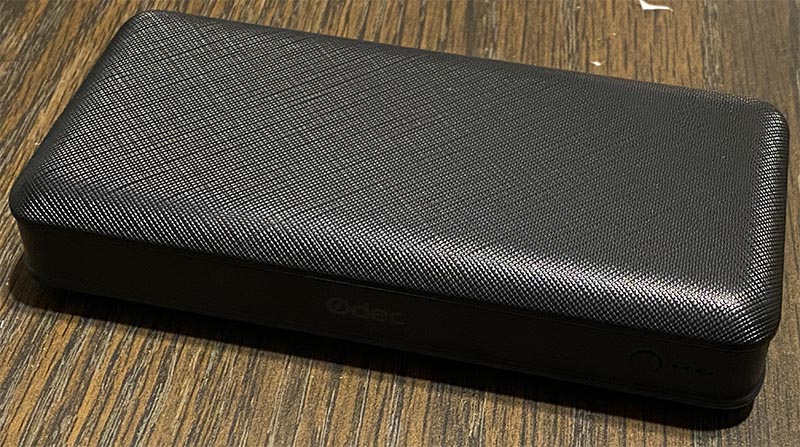 The Odec 20W PD Power Bank has an overall capacity of 20,000mAh. This is a high-capacity battery, enough to charge an iPhone 12 a little over five times. Battery capacities are similar on modern Android phones, so you can expect similar performance. For larger devices, you can charge an iPad Mini 5 up to 2 ½ times, or an iPad Pro 11 twice. 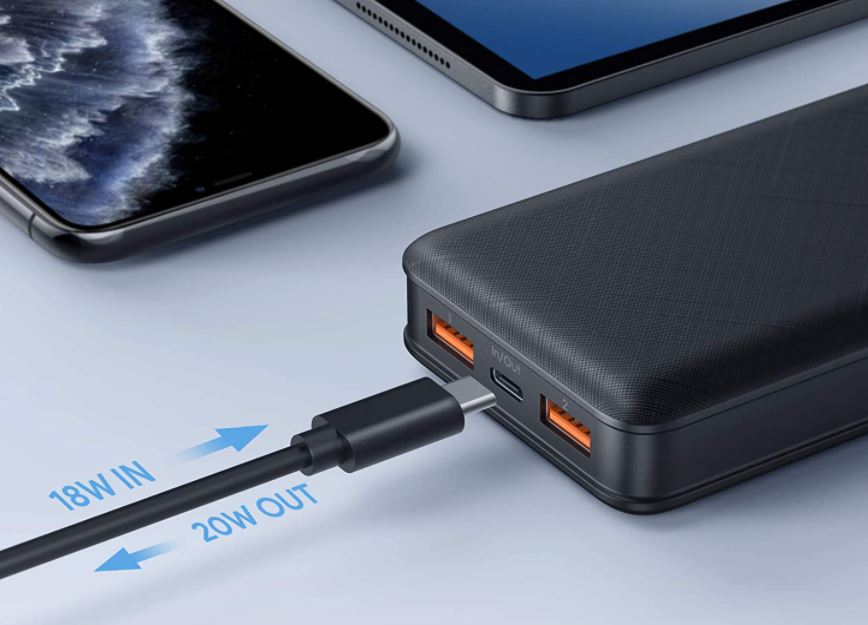 The downside here is the charging speed. The PD port is indeed a PD port, but only barely. It delivers 20 watts, enough to get the fastest possible charging on an iPhone. However, it’s not enough to run any laptop. It’s not even enough to maximize charging speed on a Samsung Galaxy, or on most USB Type-C Android phones. The two USB Type-A ports offer QC 3.0 charging, which provides up to 18 watts on compatible devices. In theory, you can charge three phones at the same time. However, the 20 watt maximum is shared across the device. This means that if you plug in two phones, each will draw 10 watts. 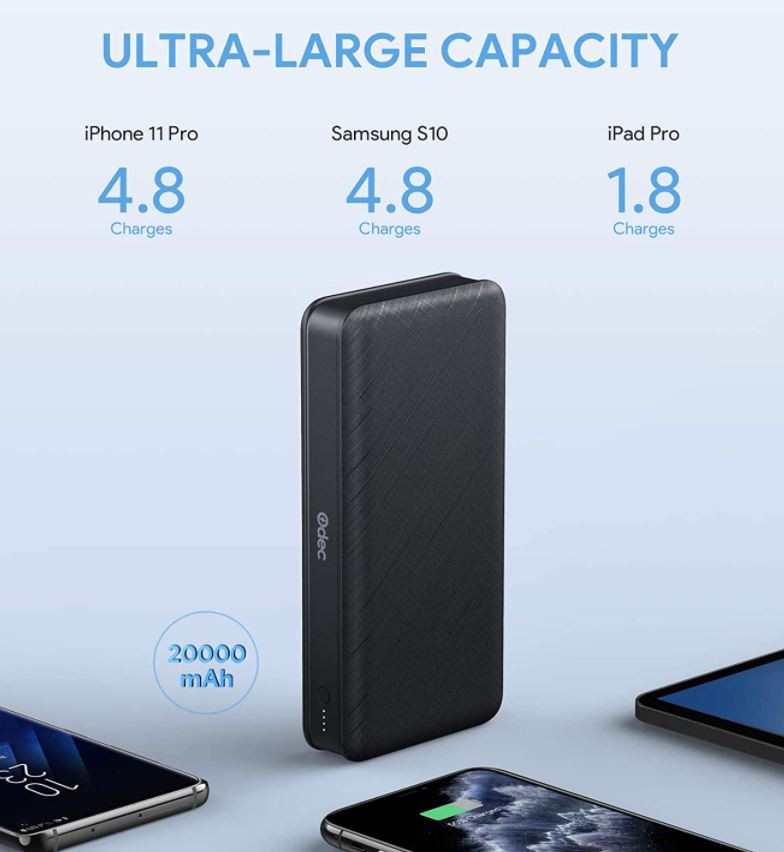 If you want to charge a laptop or a newer Android phone, you’ll want a power bank that delivers a higher wattage. In that case, consider the AUKEY PB-Y24. It has the same 20,000mAh capacity as the Odec power bank, but 65 watts of maximum power. On the other hand, the overall design isn’t nearly as rugged as the Odec’s. 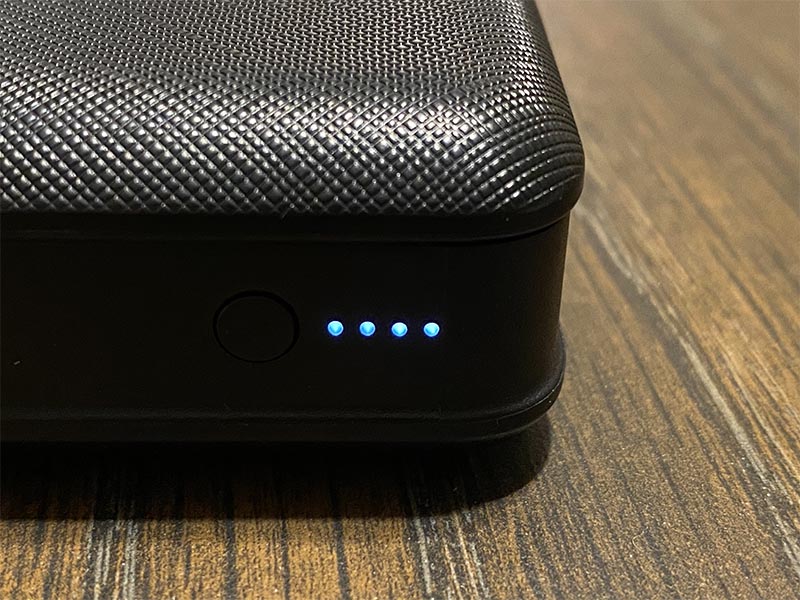 The Odec’s capacity works out to 100 watt-hours when you convert it over. This is right in line with the TSA maximum for carry-on bags. One watt-hour more, and you’d need a special waiver to take it past security. As far as capacity goes, you’re getting the best possible bang for your buck for an airworthy power bank. That said, you might want a power bank you can carry in your pocket. If that’s what you need, check out the CHOETECH B626. It offers PD charging in a pocket-sized form factor, but with a maximum capacity of only 4,500mAh.

The Odec power bank has a full array of safety features built into the circuitry. It protects your devices from overcharging and overcurrent, as well as from short circuits and bad cables. Not only that, but it has an internal temperature chip that will shut the charger off if it starts overheating. We didn’t have any temperature issues, but it’s good to know you’re protected just in case. 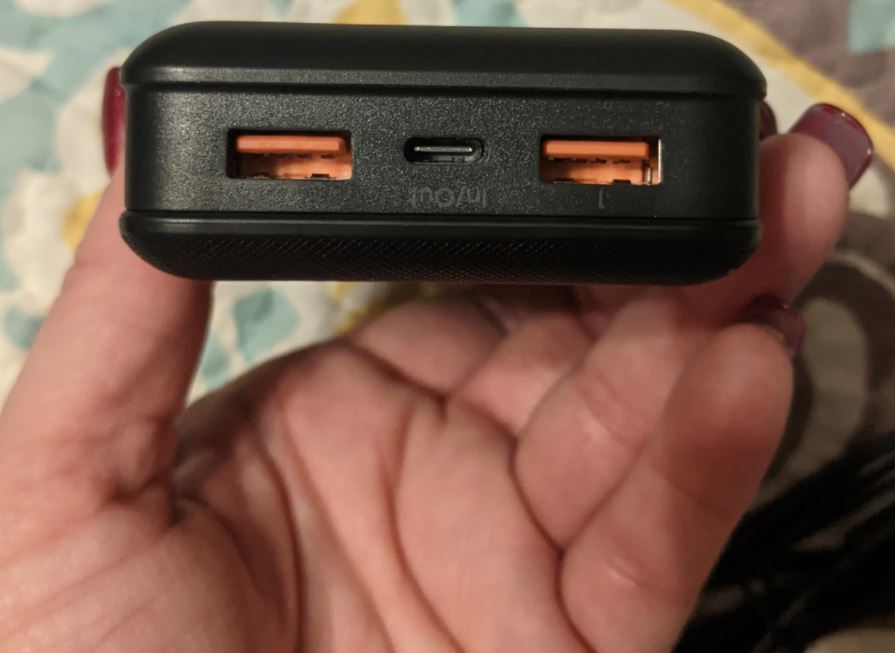 As you can see, the Odec 20W PD Power Bank is a bit of a mixed bag. Let’s start out with what it’s not: this is not an all-purpose PD charger. In fact, it barely exceeds ordinary USB Type-C in terms of charging performance. This means it’s not useful for laptops, and won’t even be the best choice for newer Androids.

That said, it has a number of distinct benefits. For one thing, the 20,000mAh capacity is high enough for several charges, but still low enough for flying. For another thing, the PD port will supply a full 20 watts to your iPhone, for the fastest possible charging. Finally, the build itself is rugged and well-designed. You don’t have to worry about it getting easily damaged from everyday bumps and dings.