Ethernet switches have been available almost from the moment that Ethernet came into existence. This only makes sense. Without a switch, an Ethernet cable is only useful for connecting one device to another. If you’re trying to create a network, that’s a non-starter. But there have been significant advances in the technology since that time. The most obvious advances have been in speed. The first Ethernet cables and switches only operated at 10 Mbps. Since then, we’ve gotten 100 Mbps, and now Gigabit, which works out to 1,000 Mbps. But there have been other advances that are almost as important.

One of these advances is the advent of power over internet (PoE). With POE technology, you can connect network devices without the need to plug them into an outlet. This eliminates tangled cables. And it means you can avoid having to put power outlets in awkward locations, like over a hung ceiling. But PoE requires specialized hardware that’s capable of pushing an electrical current through an Ethernet cable. Today, we’ll be looking at one such device, the OvoLink 8 PoE Port Smart Managed Gigabit Switch. As its name implies, this is an 8-port switch that provides gigabit speeds with PoE. But what else is it capable of? We dug deep and found out. 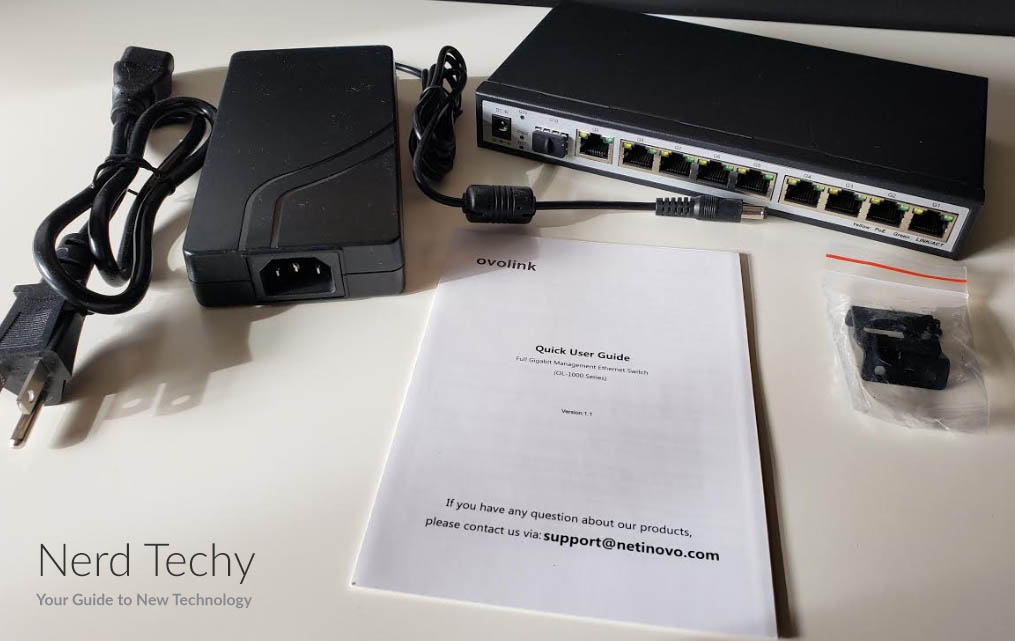 The OvoLink 8 PoE Port Switch measures 8.1 inches in width, 4.1 inches in depth, and 1.1 inches in height. This is less than half the width of a standard server rack. So while the OvoLink has the necessary screws and threaded holes for mounting, you’ll need an adapter. Alternatively, you can mount this switch on a wall, or simply set it on a desk or another flat surface. It weighs only 2.78 pounds, so it’s lightweight enough that weight is not going to be a concern.

The case is constructed from anodized aluminum, with a textured black finish that’s very durable. On both sides, you’ll find the mounting screws and threaded holes. There’s no fan inside, since none is required. The OvoLink runs cool, and won’t overheat under any normal conditions. This keeps it quiet, so you can use it in an office or other workspace without causing any distractions.

The aluminum case is also resistant to corrosion, so you won’t need to worry about rust. This will be true even if it’s exposed to humidity. On the back, you’ll find a port for the power supply. You’ll also find a gigabit Ethernet input port, 8 gigabit Ethernet output ports, and an SFP port. Each of the Ethernet ports has a pair of LED lights next to it. The green light indicates that there’s an active data connection. The yellow light indicates that the switch is sending PoE to that device. 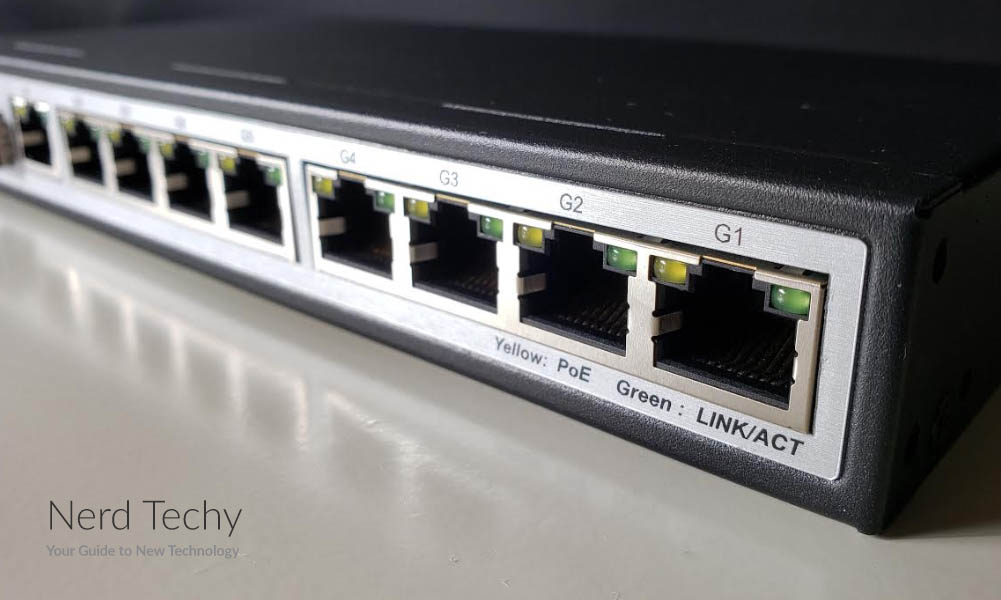 The SFP port is a particularly attractive feature. While most devices will connect via Ethernet, you may need a fiber-optic connection. Through the SFP port, you can attach adapters for fiber-optic and other different connection types. You’ll be perfectly positioned to use just about any type of connection imaginable. That said, many of these connections will require some tweaking in the cloud-based configuration software. We’ll talk about configuration a bit more towards the end.

The OvoLink Switch is designed to operate under just about any conditions. It’s rated to function in temperatures from -40 to 167 degrees Fahrenheit. It will also operate in anywhere from 5 to 95 percent humidity without developing any condensation. Now, data centers are climate-controlled, so this typically shouldn’t be necessary. However, your switch may not be located in a data center. If you happen to need a switch in an outbuilding or other non-climate-controlled space, you’ll still be just fine. You’ll also receive excellent surge and lightning protection. The surge protector on the OvoLink is capable of absorbing up to 6KV of extra voltage. So even if lightning strikes your data center, it won’t fry all your connected devices. 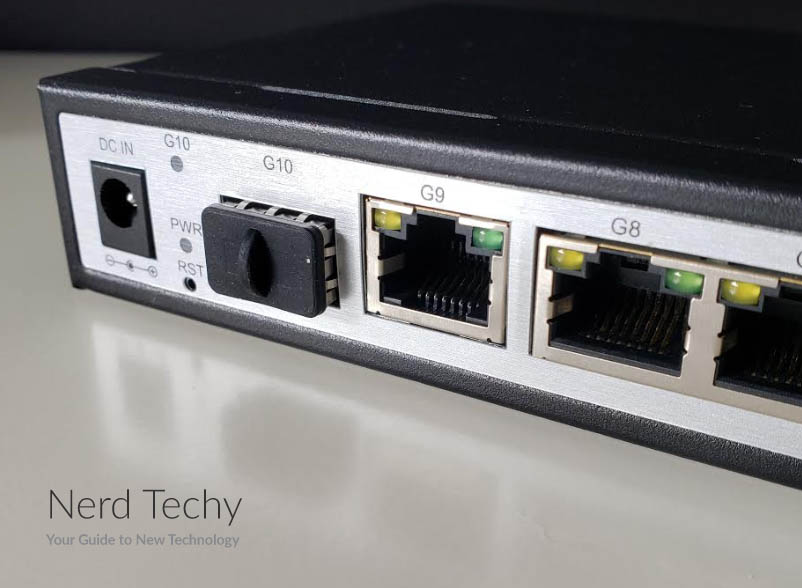 All eight of the OvoLink’s ports are adaptive. This means that they’ll switch automatically between 10, 100, and 1,000 Mbps depending on what type of device is connected. They also support a wide variety of Ethernet standards. These include standard Ethernet, 100Base-TX, 100Base-FX, Flow Control, 1000Base-T, and both 802.3af and 802.1at Ethernet PoE standards. To put that in plain English, you can plug just about anything into the OvoLink, and it will be plug-and-play.

The power input on the OvoLink provides 60 volts of power, more than you’ll need for PoE purposes. That said, the total wattage is your main limitation. Each individual device can draw up to 30 watts. However, the total limit of the entire OvoLink switch is 120 watts. So you’ll only be able to connect up to 4 devices at a full 30 watts. That said, not all devices are going to draw anywhere close to 30 watts. If you need 15 watts or less, you’ll be able to power all eight devices without any issues. 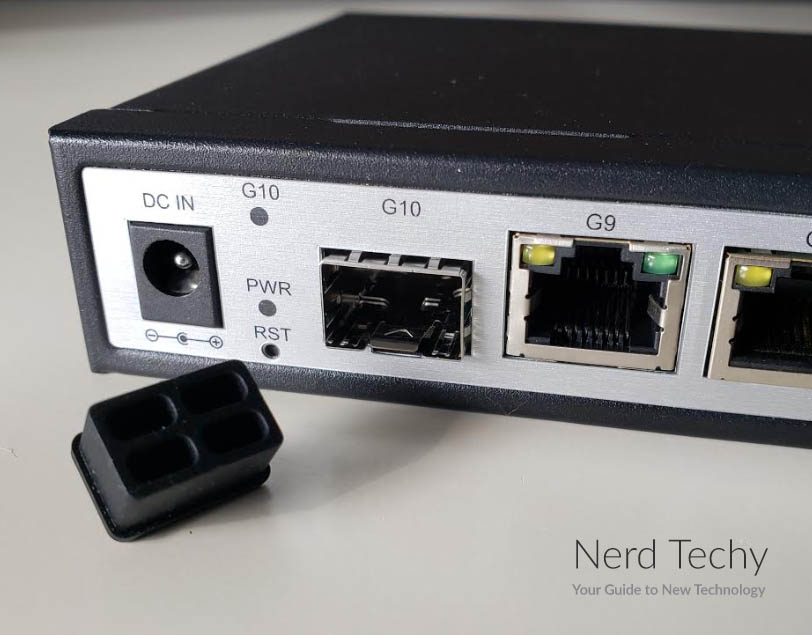 But let’s say you need more than 120 watts of total power. How are you going to make that happen? The answer is to use a gigabit PoE injector. These tools will add additional power to the Ethernet line, powering more devices.

Like most advanced Ethernet switches, the OvoLink can be configured with a wide variety of different options. This isn’t strictly necessary. If you’re running a simple home network, the default settings should work just fine. But corporate networks often have special equipment that require their own special protocols. In this case, you’ll get a lot more bang for your buck by configuring your switch manually. To that end, the OvoLink works with a cloud-based configuration software that offers plenty of options. 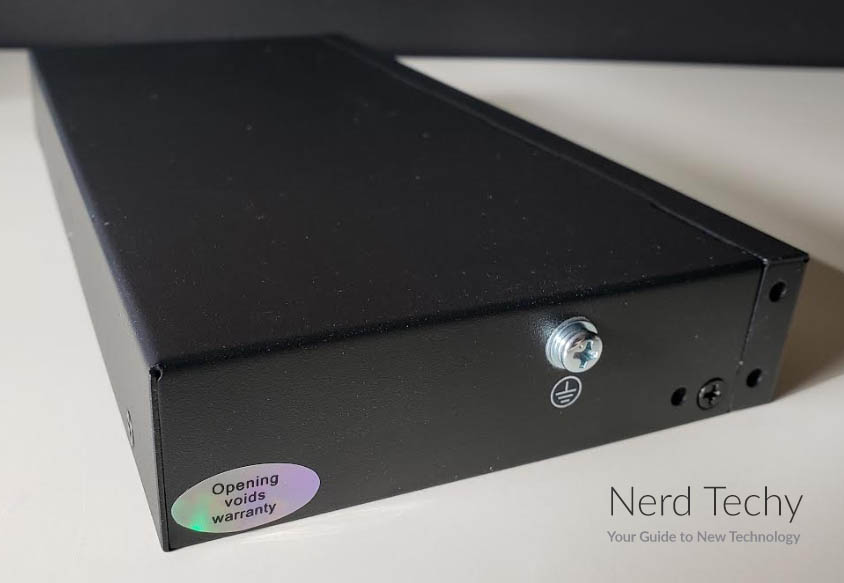 To begin with, you can switch between multiple protocols. These include SNMP, STP, LACP, ARP, DHCP, and LLDP. If that sounds confusing, don’t worry about it. As we said, home users aren’t going to need to worry about this. But enterprise users will appreciate the ability to set up individual ports to use discrete protocols. So you can use different settings for routers and switches than you would for connected “internet of things” devices.

There are also additional security features available through the OvoLink management software. You can prevent broadcast storms, which is what happens when there’s too much data going over the wires at once. These incidents are the bane of network engineers everywhere, and it’s nice to see OvoLink taking that into account. On a similar note, you can perform basic network optimization tasks. Prioritize some connections over others, or simply set limits to the speed of individual devices. These tools can go a long way towards maximizing your network’s efficiency. 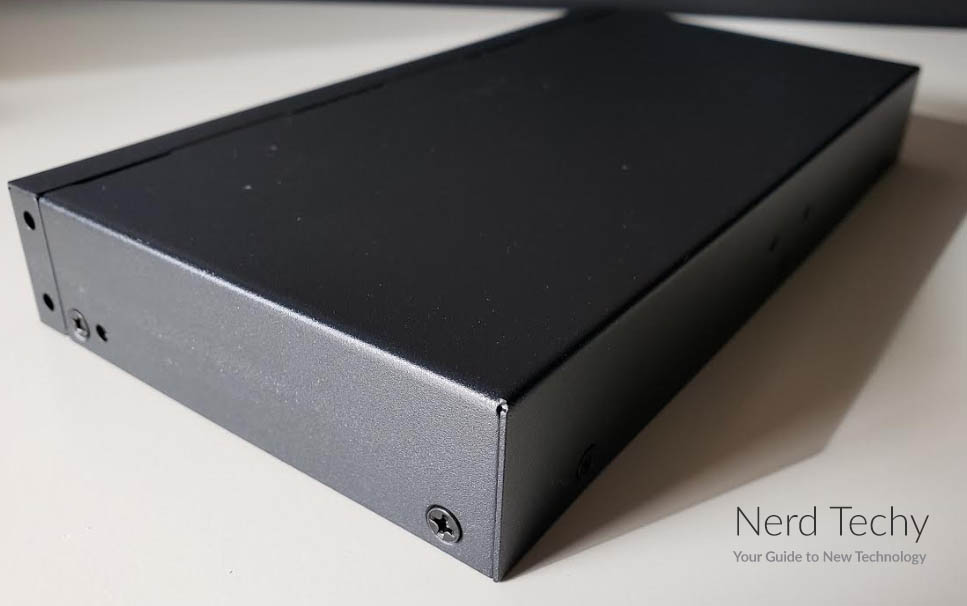 The primary limitation of Ethernet is its limited range. At anything past 100 feet, the signal quickly starts to degrade, quickly reducing your speeds to dialup levels or worse. For a run of that length, you have a couple of options. First, you could install additional switches and routers. These will boost the signal, allowing for longer range. But each switch or router you use is going to introduce some level of latency. Over very long distances, this is simply untenable. Thankfully, there’s a solution. You can use fiber connections for these longer runs, vastly improving performance. If that’s what you need, consider adding an Ethernet fiber media converter to your network. These devices make it easy to build a network that’s part Ethernet, part fiber-optic.

The OvoLink 8 PoE Port Smart Managed Gigabit Switch is one of the more interesting devices we’ve seen lately. We review a lot of PoE devices. So it was nice to be able to present people with a viable option for a PoE switch. But there’s a lot more to recommend this switch than just a few watts of power. 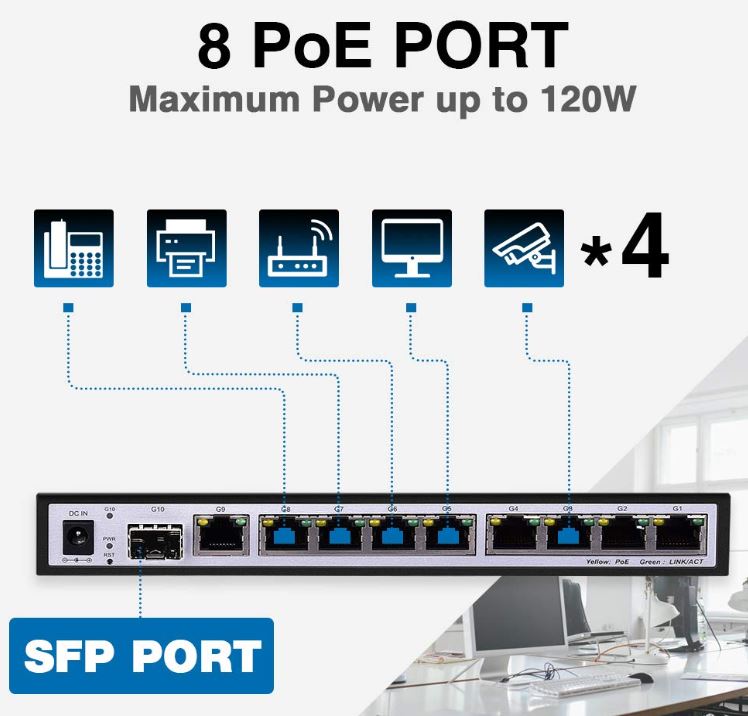 To begin with, it’s very well-engineered, even by enterprise standards. The operating temperature range, for example, is truly insane. When are you ever going to see temperatures below -40, or higher than 167? Even if you’re running a server farm in the Sahara desert without air conditioning, you’ll be just fine.

The configuration software is also a great feature. Most switches allow some level of customization, but few offer this many enterprise-grade features. Homeowners probably won’t need to change any settings. But for professional network engineers, these features are essential.

Finally, it’s just plain versatile. Want to mount it in a rack? You can do that easily. Want to set it on a flat surface? It will stay put. Want to hang it on the wall? Knock yourself out! You aren’t tied into any one configuration, so you can easily make the OvoLink work for your needs.