Moving a network connection across great distances can be tough. It’s a large part of the reason why people switch to fiber optic connections. After about 100ft, Ethernet cables and their copper construction just don’t cut it. Which makes fiber connections essential for people who are trying to connect to the internet from isolated portions of a complex, separate buildings, or another area that’s generally impervious to Wi-Fi.

An Ethernet fiber media converter does an incredibly complicated job — but understanding what it’s doing is actually very simple. They receive an electronic signal from an Ethernet connection, and then translate that electrical signal into a series of light pulses. Those light pulses can then be sent across a fiber optic cable, which transmits your signal to its destination at the speed of light.

Picking the right Ethernet fiber media converter isn’t nearly as tough as all the stuff the converter has to manage. If you’re picking a converter to be used in an array, you should think about the form factor. Otherwise, you can focus primarily on data rate, compatibility, and connectivity concerns.

You generally don’t have to think about commercial vs industrial grade equipment, with one exception. Industrial grade media converters are filled in hot, humid, electrically busy environments. They can survive freezing temperatures, too. If you’re not thinking about operating the equipment in those kinds of extreme environments, then you can stick with commercial gear.

Most Ethernet networks will use 10/100Mbps, 10/100/1000Mbps, or the 1000Mbps network standard. This is one detail that actually does matter. Because if you’re not careful, it’s easy to end up picking an Ethernet fiber media converter which doesn’t support the type of network you’re running.

Basic compatibility concerns almost don’t need to be mentioned. However, you might want to stop and consider if you intend to use a single mode fiber optic cable, a dual strand cable, or a single strand cable.

How can you connect the fiber media converter? With the right gear, your potential options are almost limitless. That might include support for copper RJ-45 cables, UPT, coax cables, single or multimode fiber connections, and so on. 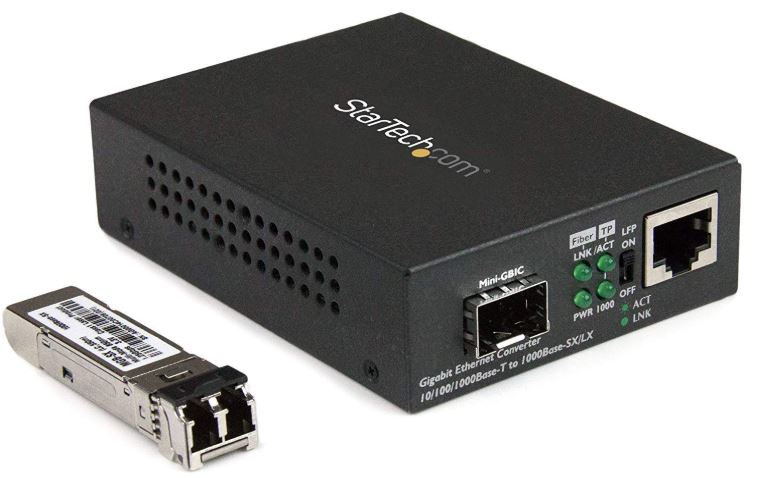 Though this brand isn’t exactly a household name, in the world of PC adapters, StarTech has a cult following. Partially because StarTech makes a huge number of quality adapters, and partially because those adapters often get fantastic reviews. Because you tend to get what you pay for with these adapters.

Their Gigabit Ethernet Fiber Media Converter is actually available in six different variants. Those variations primarily vary based on the distance you need to transmit your signal. This particular gigabit Ethernet fiber media converter is capable of carrying your signal as far as 1804ft. That’s just over one third of a mile.

The StarTech Gigabit Fiber Converter measures 6.2 x 3.6 x 1.8 inches, a reasonably compact design that vaguely resembles a smaller router. The converter itself was constructed inside a sturdy metal housing, which was engineered to provide years of lasting performance. True to form, it can also connect an Ethernet network alongside a fiber backbone to integrate all your remote devices into one system.

The topside is highlighted by the StarTech logo, and the sides have a couple of ventilation holes. Beyond that, the front face of the device consists of the mini-GBIC port, Ethernet port, on/off switch, and six indicator LEDs. The LEDs can provide you information about the status your network, ranging from connectivity to power. On the opposite sides of three ports, there’s a simple DC power plug.

The plug-and-play design of this converter ensures installation should be pretty smooth. Though as with any device where many wires are connecting in a single place, there is the tendency for things to feel a little cluttered unless you wall-mount the unit and manage its cabling. Speaking of wall mounting, this converter provides several flexible installation options, including plenty of options for wall mounting.

StarTech is a pretty good way to go for cost effective solutions that are also dependable for shorter range networks. The multimode transceiver is actually removable, so you can swap the transceiver in the future if your networking needs happen to change or fluctuate. And StarTech was careful enough to support 10/100/1000Mbps networks, so you don’t have to concern yourself with compatibility issues.

If you were looking to send your signal further distances, you’d need to use one of their stronger converters, like the SM 20km. But for someone who can make due with a third of a mile, this converter is a terribly cost effective solution. It could easily save someone hundreds or thousands of dollars when trying to run shorter connections.

In addition to the gigabit Ethernet media converter, StarTech includes a universal power adapter which can be used internationally. It also includes a two-year warranty from StarTech alongside unlimited tech support. However, it doesn’t include any wall mounting brackets or rack brackets. Those wall mounting is possible; you have to bring your own hardware solutions to the table. 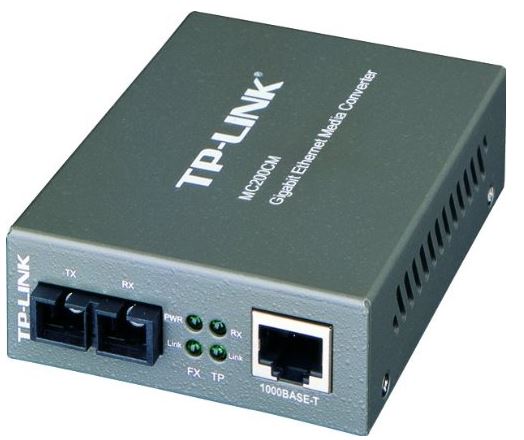 Similar to the StarTech adapter, the TP-Link Gigabit Ethernet Media Converter can convert Gigabit Ethernet networks in full duplex mode. You’ll also find support for mid/mid-x, TX, and FX ports. Things run a little smoother thanks to auto or force transfer on all those FX ports, allowing you to extend the total distance of your connection out towards 1,600ft.

It’s strange how TP-Link is the biggest name on this list, yet their fiber media converter is arguably the ugliest looking. Its simple gray chassis measures 8 x 2.6 x 6.5 inches, and weighs about a pound. That weight is entirely due to the sturdy metallic construction, which is pretty hard to miss.

Similar to a router, a number of LED indicators on the front of the device make it simple to view the present status of your network. Those indicators also provide you details about the kinds of connections you have going on at the moment.

This converter was designed to be used with a multi-mode fiber cable and SC-connector. It also supports shortwave laser specifications for full wire speed forwarding. More than that, it can be used as a standalone unit, in combination with other converters, or even run without the chassis.

With respect to installation, many converters claim to be plug and play. But the TP-Link Gigabit Ethernet Media Converter gets pretty close to achieving perfect plug-and-play installation. There isn’t any configuration involved whatsoever. The only mess you have to sort out is cable management and the placement of the converter.

If you’re looking to operate this converter in an array, it’s worth knowing TP-Link has a pretty impressive 19-system chassis that’s compatible with this unit. It has bottomless support for TX ports, and the front panel doesn’t block visibility of LED indicators. Pretty smart design.

You could use this for IP cameras, but not if your camera draws its electrical power from Power over Ethernet. Because this device converts Ethernet connections to fiber – PoE features gets swallowed in the process.

A couple more notes about compatibility. You can’t connect this converter straight into a 220V outlet, you would need an international adapter plug. And though this information is slightly implied by its name, this Gigabit Ethernet Media Converter is not compatible with 10/100 networks.

Networx doesn’t have a fraction of the name recognition of a brand like TP-Link. But this converter performs every bit as respectably as anything TP-Link has ever made. Actually, the more accurate comparison would be with the StarTech converter.

But unlike many similar converters, Networx manages to maintain high performance across distances as far away as 49 miles. At least, when paired with the right cables. 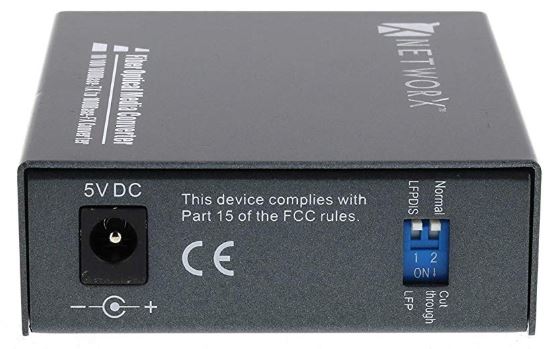 Networx’s converter measures 8.1 x 5.8 x 1.8 inches, making it slightly larger than the other equipment on this list. The build is still pretty slim and portable, though its nearly 1lb weight means you might need more than tape to mount the unit. Luckily, wall mounting options are available.

Fully equipped with a fiber optic connector, this converter is capable of transmitting TX and receiving RX. There’s also one RJ-45 jack and an external power supply receptacle for expansion possibilities. And six LEDs have been built into the front side of the unit, which are handy for diagnosing problems with the system, or otherwise continually monitor its performance and state of power.

The adapter looks a bit utilitarian. The outside has a few LEDs, connection ports, and heat grating. The topside of the unit provides clear identification for the unit, along with information about compatibility. That way, someone who’s just picking up the gear with no context can still immediately appraise its capabilities and limitations. The connection ports are equally well labeled. 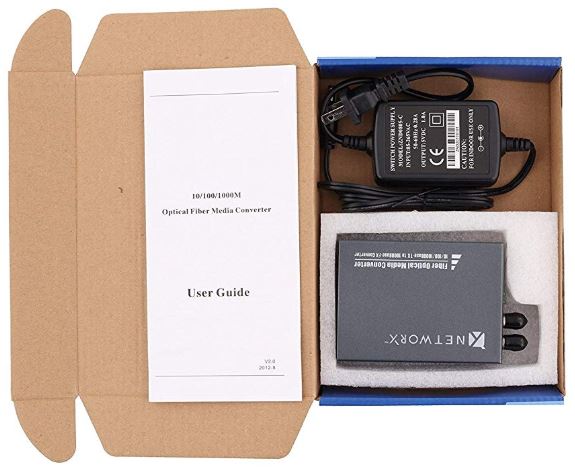 This converter comes with everything you need to get started, including the power supply. This converter actually doesn’t draw much power, which makes it uniquely useful running an underground fiber connection between different buildings. With so much data flowing through it, you would think it would run hot.

The included user guide is a little technical. But it provides separate figures and diagrams for different types of installations. It’s pretty handy for orienting yourself to the Networx Gigabit Ethernet Fiber Media Converter.

Choosing Between 3 of the Best Ethernet Fiber Media Converters

For someone who is using their fiber media converter as part of a collection of converters, the StarTech converter is worth careful consideration. It’s been made to ensure your network can expand and grow in the future. Its compatibility options leave little to be desired, though it’s unfortunate they don’t provide anything resembling mounting hardware along with this kit. If you can forgive that, it’s usually worth trusting StarTech equipment.

The TP-Link Gigabit adapter is a good choice for a person who’s trying to find a basic, cheap, and simple converter. Though this is one of the less expensive fiber media converters you’ll encounter, it’s made by TP-Link, which provides it some clout. If you end up needing tech support, you’re much better off turning to TP-Link than a smaller brand like Networx.

Finally, there’s the Networx converter. It’s almost identical to the StarTech converter. But StarTech provides slightly more support options while Networx provides a greater maximum transmission distance. For someone who intends to run their signal more than a mile, the Networx Gigabit Ethernet Fiber Media Converter will be worth careful consideration.