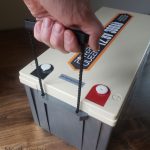 Without electricity, there would be no such thing as modern life. That’s not an exaggeration. Think of your refrigerator, for example. Sure, you could survive without it, but you’d have to radically rethink your diet and shopping habits. You’d need to make daily trips to the market for fresh produce, and buy meat the same day you cook it.

Even when you’re off-grid, you might still want to run some electronics. Let’s say you’re staying in a hunting cabin for the weekend. You’ll probably want to run a space heater at a bare minimum. Your cell phone, meanwhile, provides not just communication, but also weather reports and other useful info.

It should come as no surprise that many people are installing backup batteries for emergency power. In off-grid applications, these are typically kept charged by a set of solar panels. In grid-tied applications, they involve a more complex set of switching equipment.

Similar batteries are also used in RVs, campers, and boats. Anywhere you aren’t getting power from the electrical company, 12-volt batteries are a powerful tool. But you don’t want to use just any battery. You want one that’s long-lasting, powerful, and reliable. Otherwise, it’s not going to be capable of meeting all of your needs. So it pays to shop around and do your research.

We’re about to review the Power Queen 12.8V 300Ah LiFePO4 Battery. This is a beefy, 300 Amp-hour (Ah) battery that can run even large appliances for several hours. It’s tough, it’s rugged, and it’s easy to install. 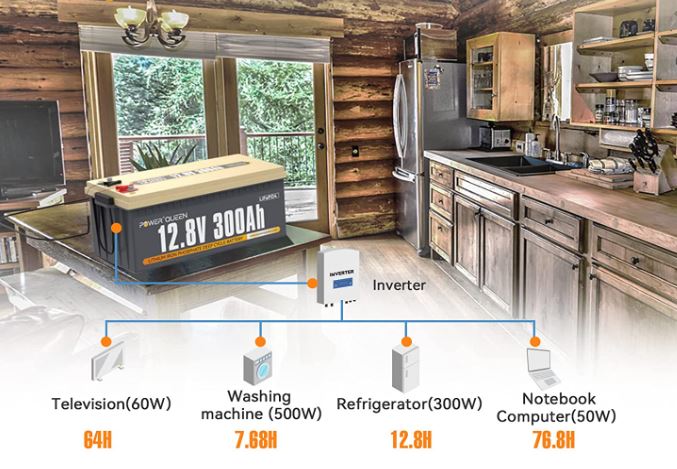 It can also be wired both in serial and in parallel, to form a larger battery array. But what is it actually capable of? How safe is it, and how reliable is the battery cell technology? To answer those questions, we’ll have to take a deeper dive into all aspects of this battery. We’ll look at everything from the physical engineering to the capacity to wiring and charging. After we’ve gotten a complete handle on this battery, we’ll be in a position to deliver an informed judgement. Let’s begin!

Before we talk about the specifics of this battery, let’s talk about the technology involved. A LiFePO4 battery is made using Lithium-iron phosphate, and it’s a relatively new technology. What exactly makes it better than old-school lead-acid technology? Here are a few factors.

To begin with, LiFePO4 cells are more reliable than lead-acid cells and other lithium cells. Even the least durable are rated for at least 1,000 duty cycles. The most durable can last as many as 10,000. This makes them a great choice for long-term installation, since they don’t need frequent replacement. 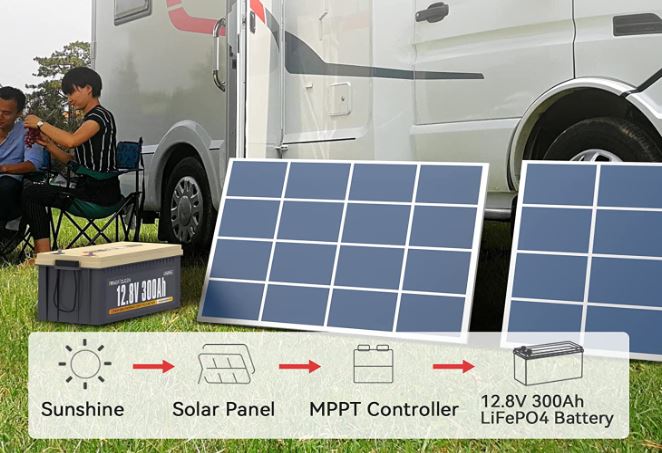 At the same time, LiFePO4 cells discharge more efficiently, up to more than 99%. Lead-acid batteries, on the other hand, will only discharge around 60% of their capacity on average. LiFePO4 batteries are also better for the environment. They don’t contain a bunch of toxic metals that leech into the soil after their disposal. If you want a truly green solar array, this battery technology is an obvious choice.

Along the same lines, LiFePO4 batteries require very little maintenance. You don’t have to check electrolyte fluid levels, and risk exposing yourself to dangerous acids. There’s no need for priming or any other fooling around. They deliver a constant discharge voltage throughout the life of the system, so you get reliable performance. They also don’t contain any chemicals that could become volatile at high temperatures. By comparison, many batteries can actually explode due to overheating.

As a result LiFePO4 batteries are among the most reliable on the market, and are used for many applications. They’re used by hospitals, the military, and anyone who needs backup or off-grid power. And while they’re expensive upfront, you don’t have to pay steep recycling fees on the back end. That said, like any kind of technology, LiFePO4 cells have some drawbacks.. In some cases, there can still be good reasons to use a traditional lead-acid battery.

To begin with, these batteries have a low energy density. To get any significant amount of storage, you need a relatively big, heavy battery. This isn’t an issue for backup systems or solar arrays, where size is a minor concern.

It’s not even a problem for cars and RVs. But for phones, power banks, laptops, and other portable devices, LiFePO4 batteries remain impractical. The smallest thing they’re typically used for are electric bicycles and scooters. Not only that, but these batteries are more susceptible to damage from mishandling. Again, this is a minor concern for permanent installation. But if you drop one, it will be easily damaged. 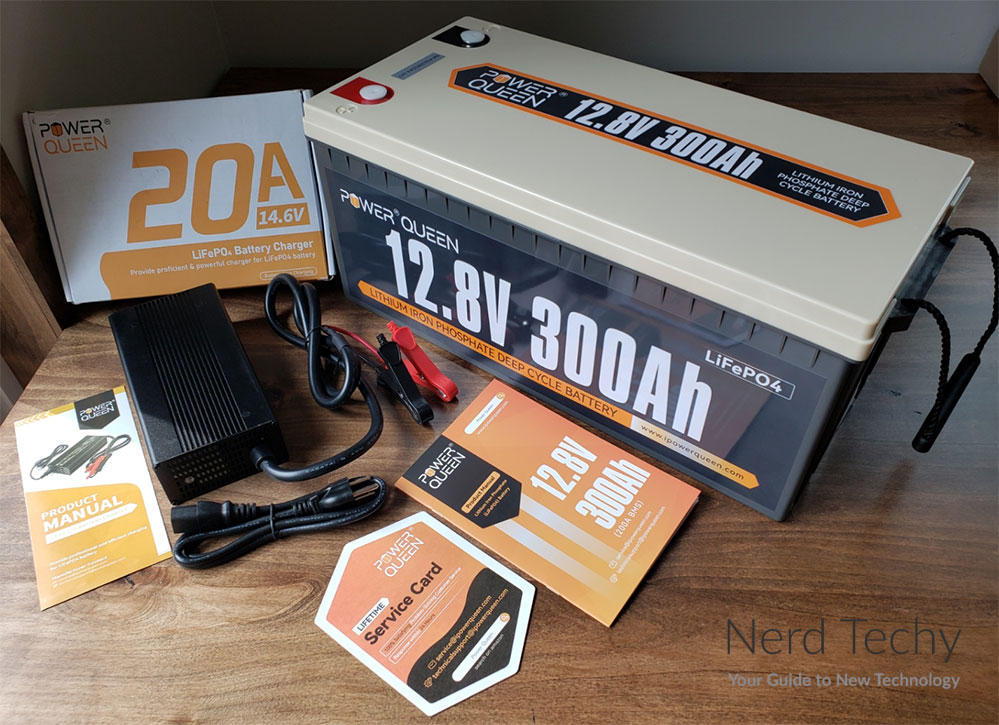 The Power Queen 12.8V 300Ah LiFePO4 Battery has a two-tone housing that’s constructed from durable plastic. The bulk of it is matte black, but the top panel is tan in color. The words “12.8V 300Ah” are printed on the side, just in case you forgot the battery’s capacity. There’s also a bit of branding, which is to be expected on any 12-volt battery. 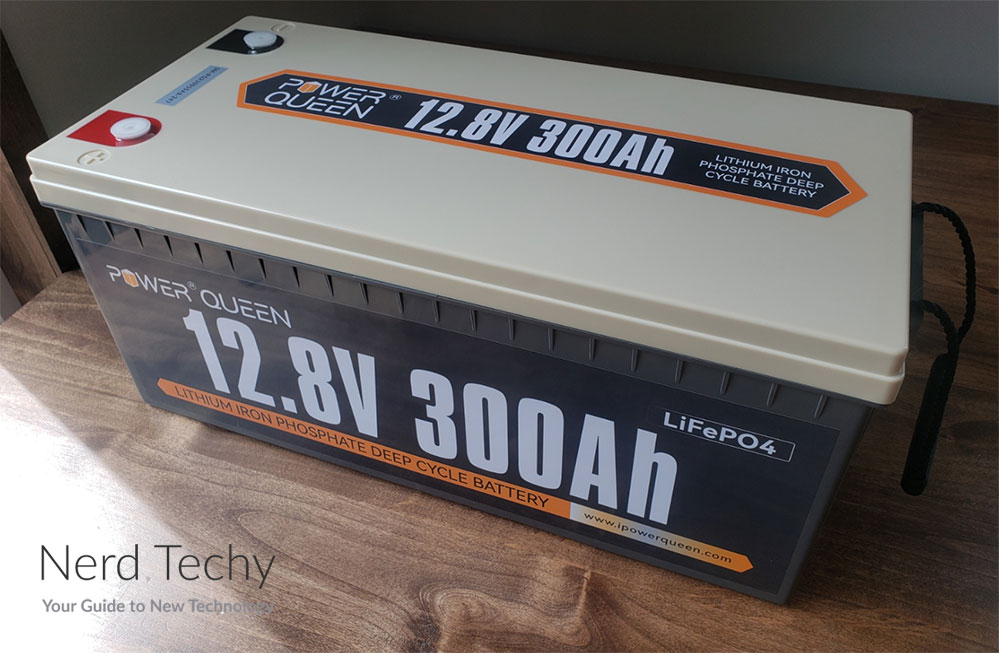 The overall size is 20.5 inches long, 8.54 inches high, and 9.37 inches thick. That’s quite big for a battery, and it’s correspondingly heavy, at just under 63 pounds. It’s pretty hefty to carry around, but thankfully there are carrying straps at both ends. 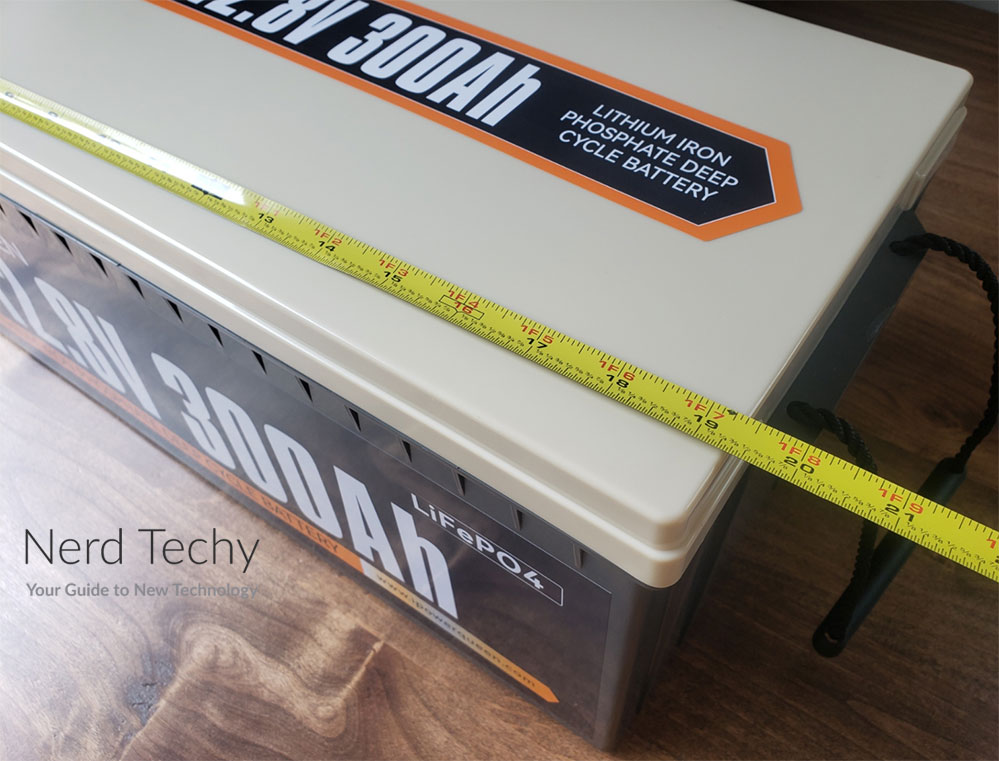 Besides, it’s not like you’ll be moving your battery around much once it’s installed. On the downside, the heavy weight makes anything other than ground shipment impractical. There’s no rush shipping available. West coast orders arrive quickly, in as little as 1 business day. But east coast orders can take as long as 7 business days to arrive. 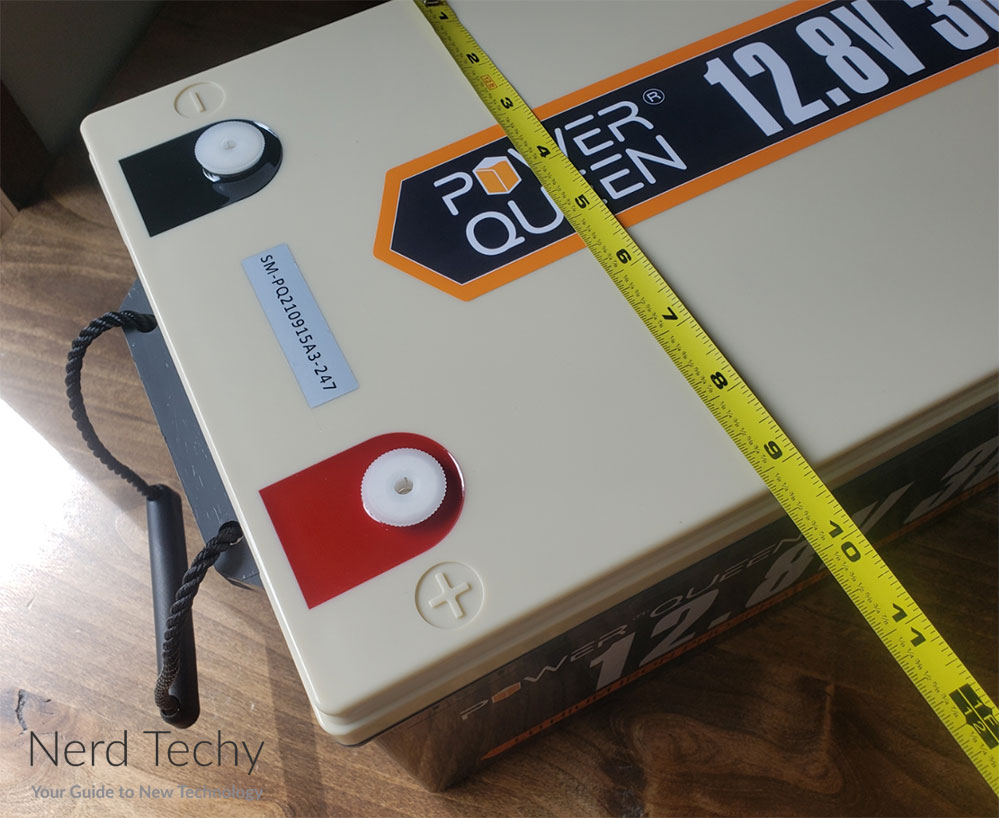 The battery terminals are located on the top of the housing, at one end. They’re marked with little colored panels, which are colored red and black for the positive and negative terminals respectively. The terminals themselves are threaded posts, with nuts for attaching your wire leads. Installing a single battery is simple. Connect it to a power inverter, and use the inverter to power any appliances. We’ll talk about multiple-battery installations in a second.

Each Power Queen LiFePO4 battery has 12 individual cells inside. These are high-quality, automotive-grade cells. Not only that, but the housing is rated IP65 for weather-resistance. You can’t immerse it in water, but rain, or even a steady stream, won’t cause any degradation. 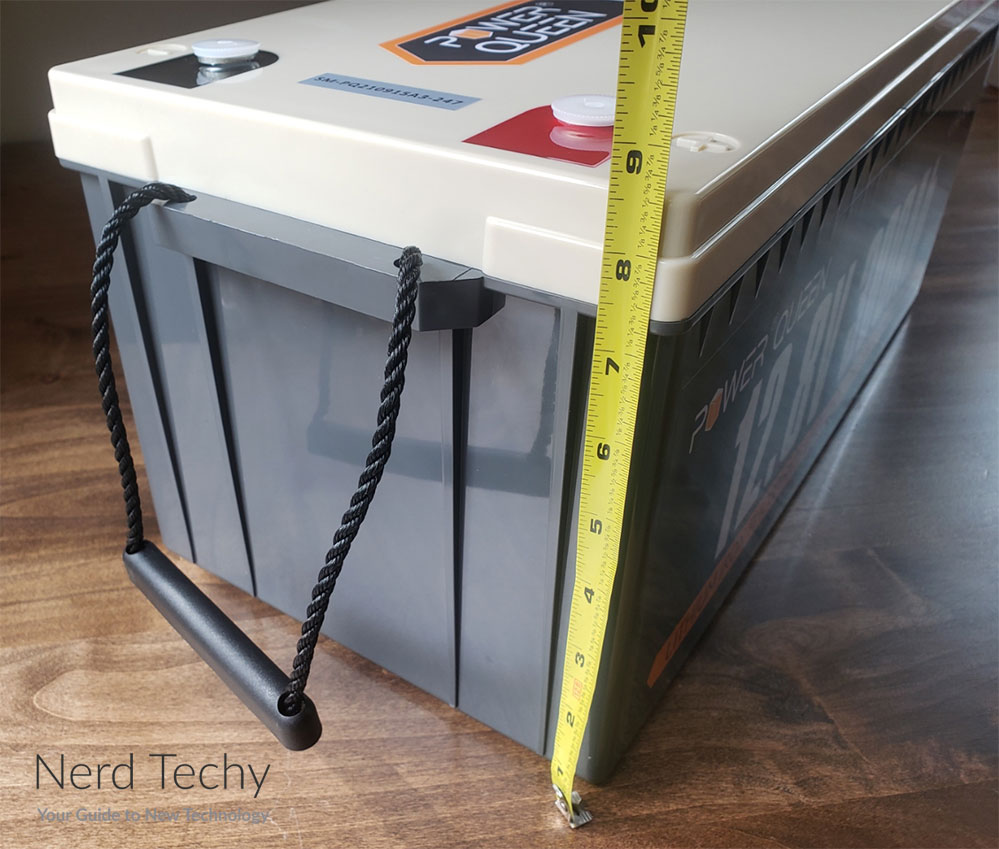 This battery is rated for 4,000 duty cycles. This means that after 4,000 full charge/discharge cycles, you’ll still retain 80% of your total capacity. The built-in battery management system (BMS) provides additional protection against any failures. Overcharge protection shuts off the charging circuitry when the cells are full, to protect them from damage. 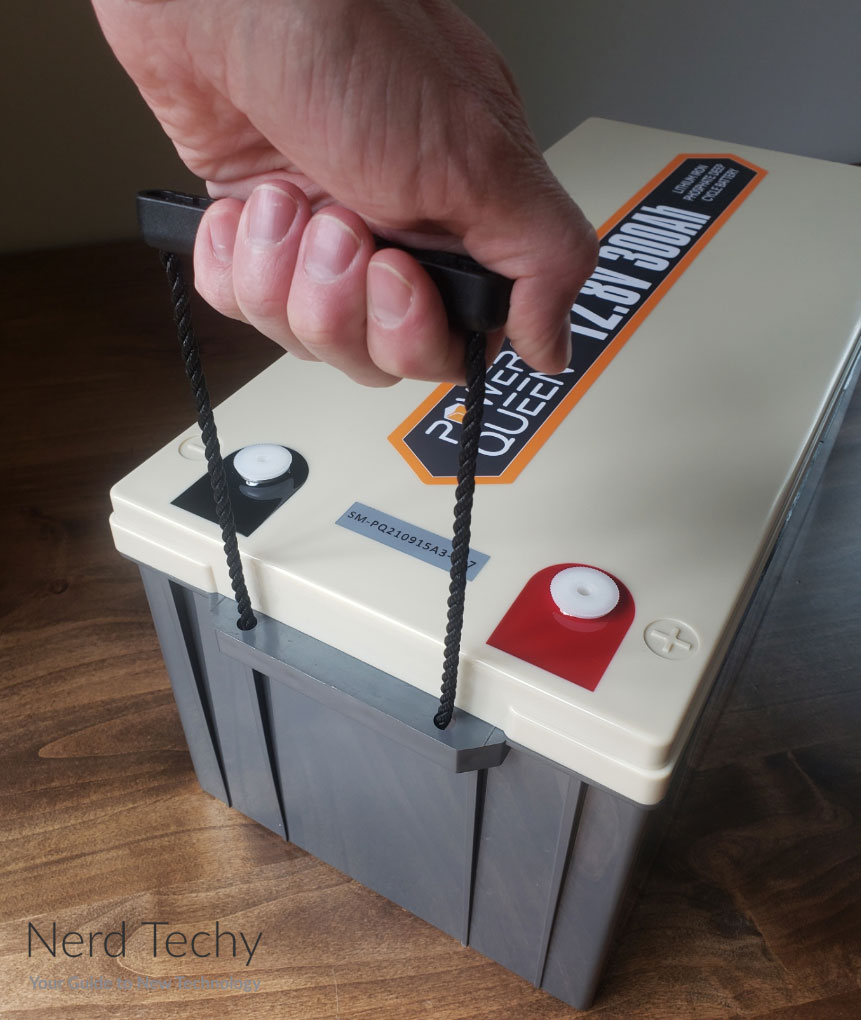 Meanwhile, over-discharge protection keeps them from going all the way to zero and burning themselves out. Over-current protection ensures that the incoming voltage won’t exceed the battery’s charging capacity. And short-circuit protection shuts down the system in the event of faulty wiring.

In addition to all that, you’re protected by Power Queen’s 5-year manufacturer’s warranty. That’s far better than the 2- or 3-year warranty you’d normally expect. If anything fails prematurely, you’ll get a replacement battery at no extra cost. 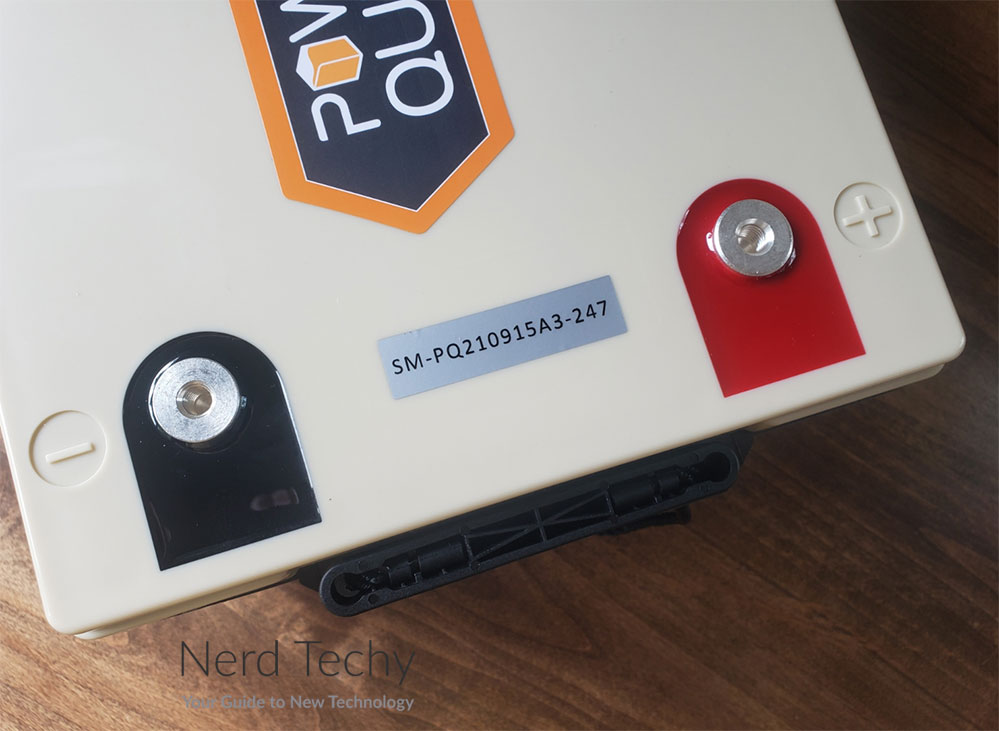 As we mentioned at the beginning, the Power Queen LiFePO4 battery has a capacity of 300Ah. But what does this work out to in practice? The 300Ah of power is delivered at a rate of 12.8 volts. This works out to a capacity of 3.84KWh, which is a measurement you’re probably more familiar with.

3.84KWh is enough to run a full-sized refrigerator for more than 12 hours. You can charge a laptop 7 to 12 times, depending on the model. You can even run a 1,500-watt space heater at full blast for around 2 ½ hours. That’s a ton of capacity, and it’s something you don’t get from most 12-volt batteries. 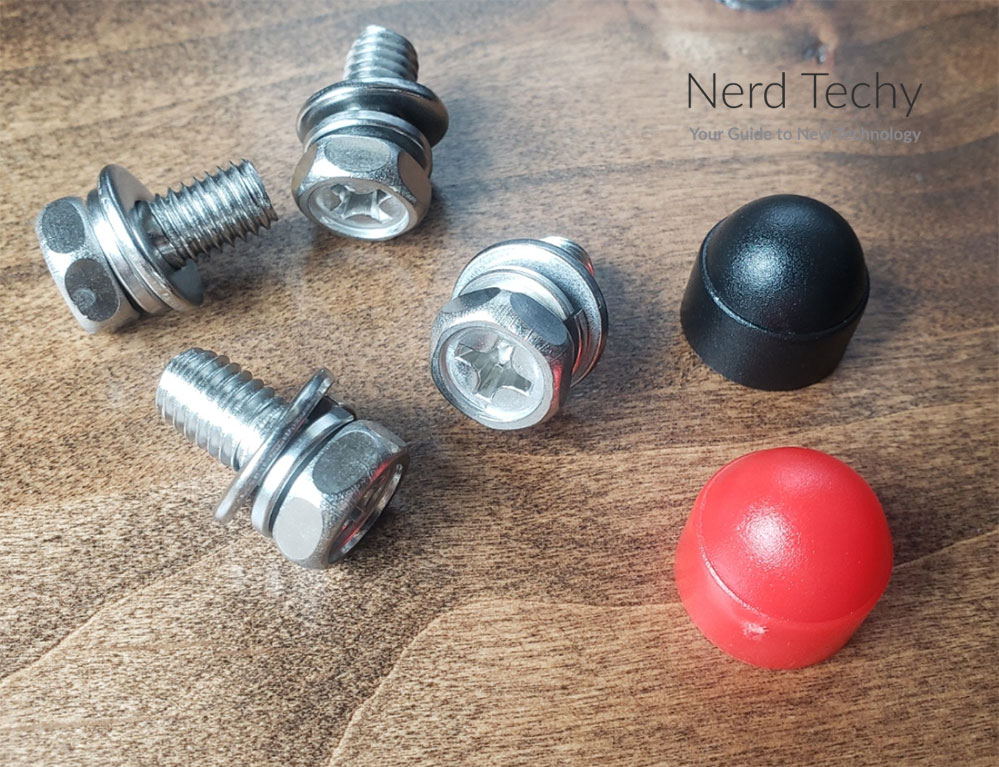 Then again, this kind of capacity also comes at a price; we’re not looking at a cheap battery here. If you don’t need this much juice and you want to save some money, consider a smaller battery. Not long ago, we reviewed the best 100Ah LiFePO4 batteries, which might be more in line with your needs.

Charging the Power Queen battery is simple. It’s ready-made to charge from a solar array, provided you’re connecting via an MPPT controller. You can also charge from any 12-volt charger, with up to 200 amps of current. Assuming you’re charging at the maximum rate, you’ll have a full charge in a little over 90 minutes. 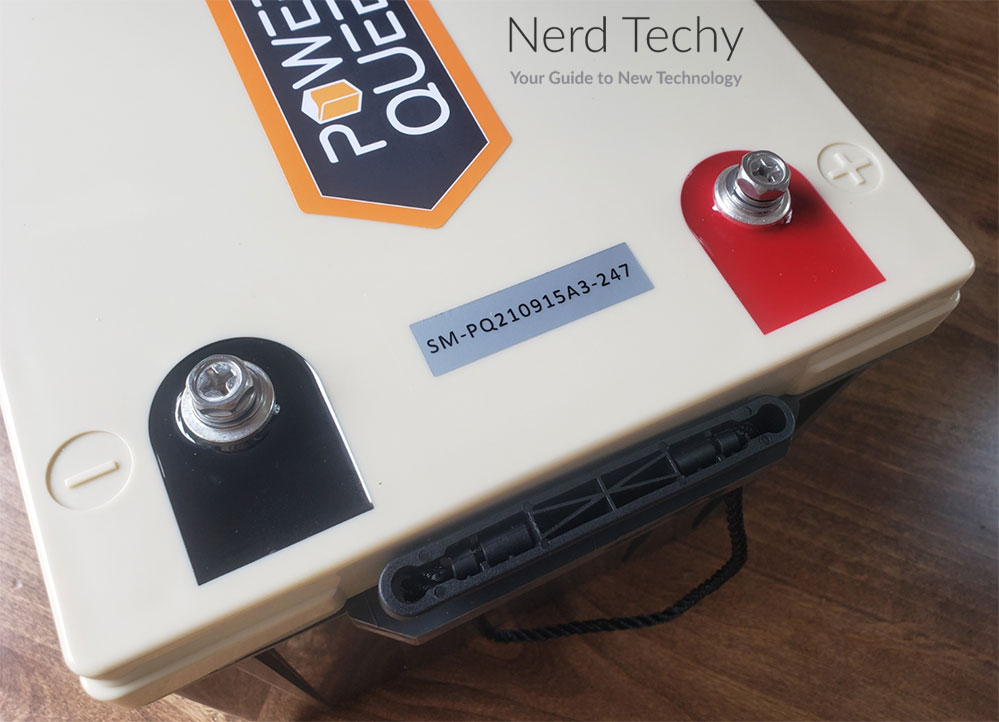 Power Queen even sells a 14.6V 20A LiFePO4 Battery Charger. It’s a simple solution for charging at home from any standard wall-outlet. Simply connect the clamps to the negative and positive terminals and plug it in. The red light will illuminate while charging but once it’s full, it’ll turn green. 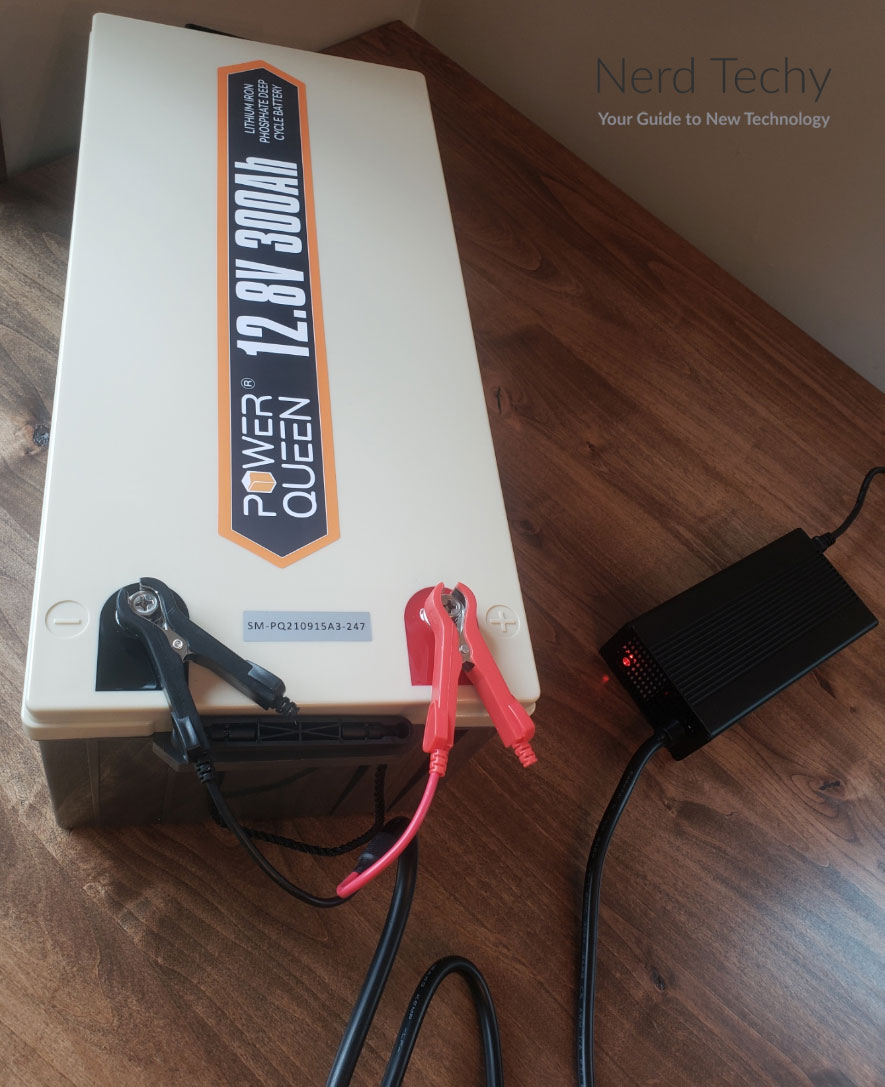 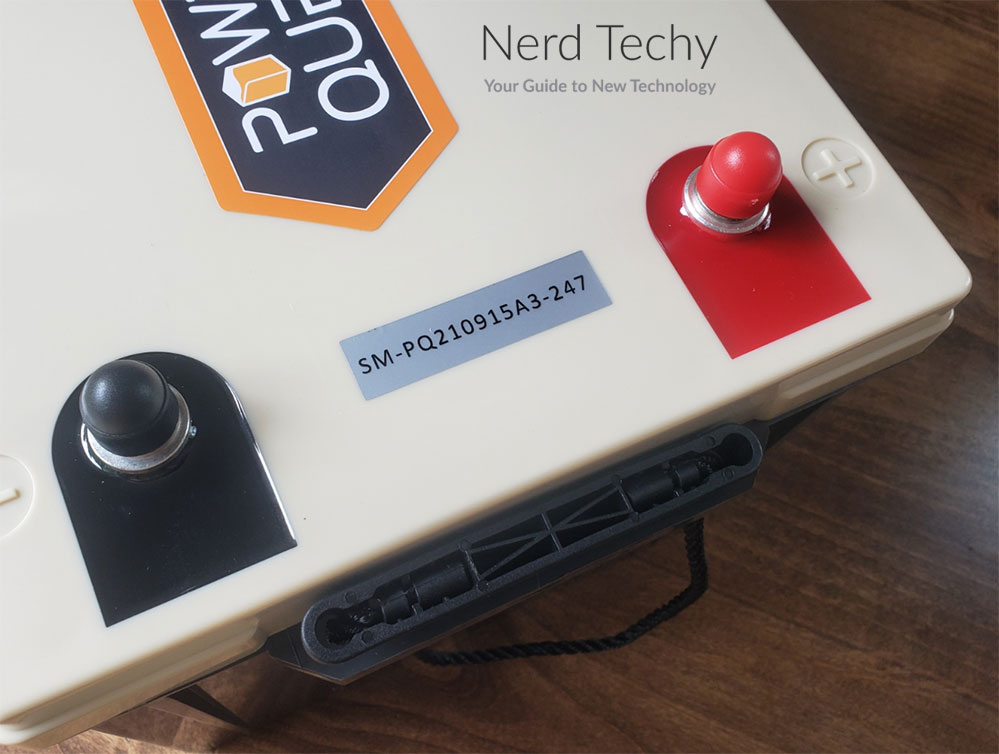 In theory, you can have a total of 16 batteries (four sets of four). This will result in a battery bank with a capacity of 1,200Ah and a voltage of 51.2V. Put in more familiar terms, you’ll have a total of 61.55kWh of energy. The average American home consumes 28.9kWh of power per day. So even if you make absolutely no effort to limit power consumption, you’ll have two days of backup power. 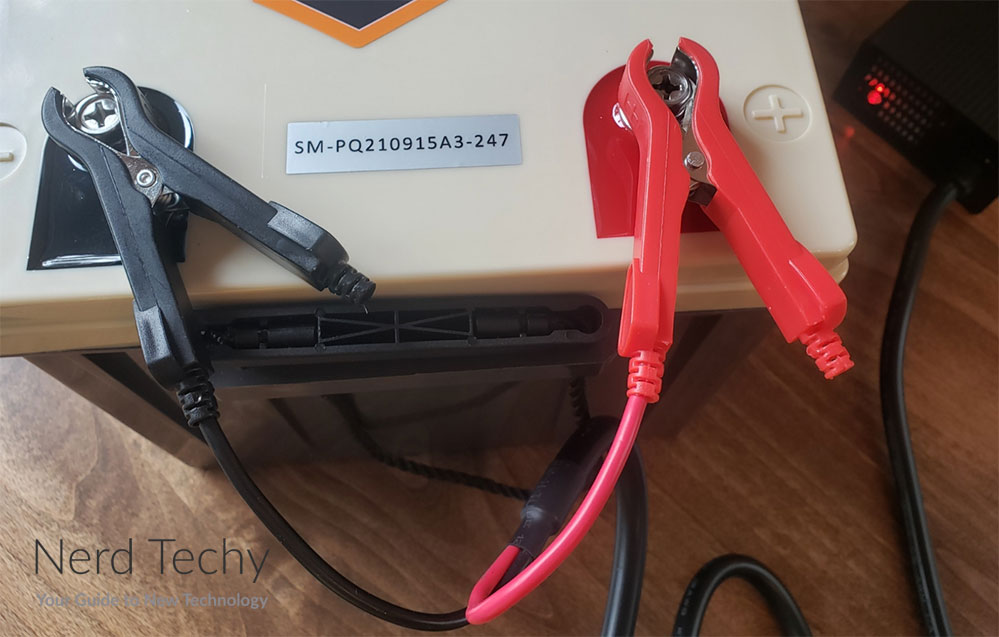 As you can see, the Power Queen 12.8V 300Ah LiFePO4 Battery is one robust power supply. With its large capacity, it can power a little off-grid cabin all by itself. Wired into an array, it can supply a truly impressive amount of energy.

It’s well-engineered and durable, with a 4,000-cycle lifetime duty rating. And with all of its safety features and a 5-year warranty, you can count on it to last for a while. If you’re willing to pay top-dollar for a top-quality battery, you’re looking at a solid choice.