Puro Sound Labs has been in the business since 2014. They released their first headphones, the BT2200, in 2014, and it won rave reviews from critics and listeners alike. There’s a reason for this: they were the first well-designed kids’ volume-limited headphones on the market. Since then, Puro has expanded their lineup with several new headphones and accessories, and they released the JuniorJams in 2018.

These headphones are designed to prevent Noise-Induced Hearing Loss (NIHL), which is a condition where a person suffers partial or even total deafness from frequent exposure to loud noises. Puro’s founder, Niki Russell, suffers from NIHL, which she developed during her childhood and teen years by listening to loud music constantly on her headphones. As an adult, she says, “I can barely hear my friends talking to me from across the dinner table.” 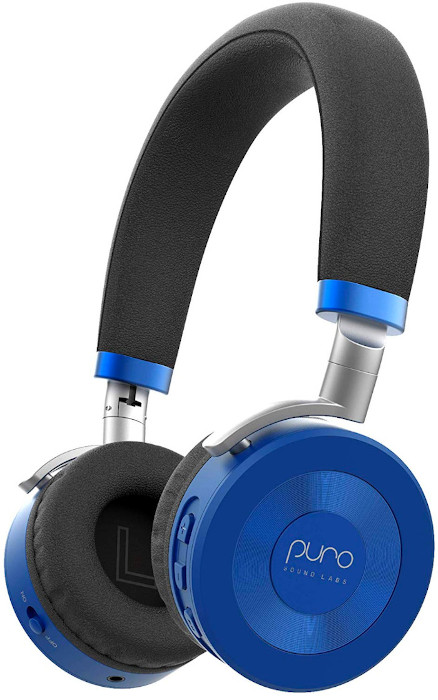 The problem with a lot of kids headphones on the market is that they’re built like toys. This is fine if you’re looking for something for your three-year-old to put in their mouth, but by the time your kids are in middle school or even in grade school, they’re going to appreciate a well-designed pair of headphones that offer quality sound. So, how do JuniorJams stack up to those lofty goals? We’re about to find out.

To begin with, these headphones are very durably built. They’re designed to stand up to the kind of abuse you’d expect your kids or even your teenagers to subject them to. The top head band is nice and thick, so it won’t crack or snap easily. It’s also very well padded, providing plenty of comfort for your kids’ heads, even on long road trips or other lengthy listening session.

The ear cups are also very comfortable, a huge upgrade over the cheap open-cell foam you’ll find on a lot of kids’ earphones. Instead, you’ll find a hefty closed-cell design that provides a firm cushion, which means the padding won’t go flat after 30 minutes of listening. This padding also provides an excellent seal, which provides passive noise cancelling that blocks out up to 80 percent of outside noise. 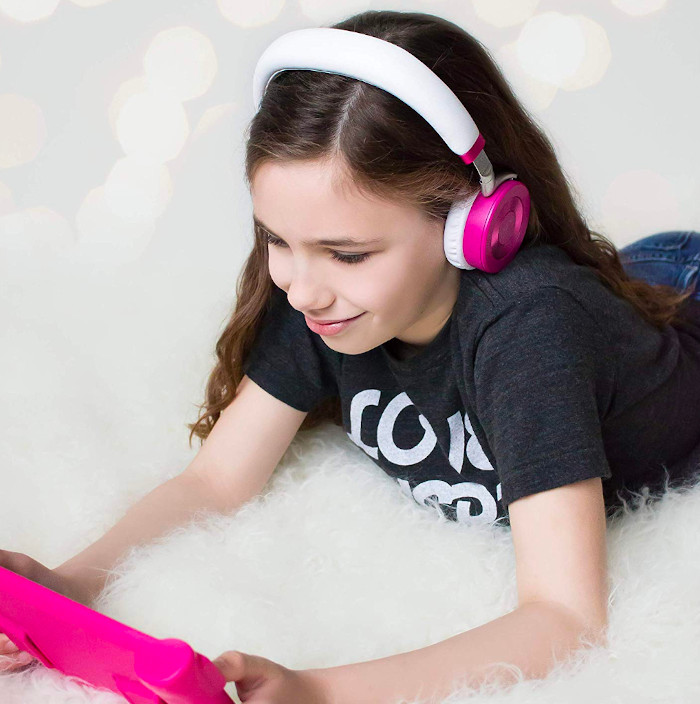 These headphones are easily portable, and also easy to store in a compact space. They fold up very flat, which allows them to easily slip into the included hard case. The hard case is appreciated, since any parent knows how kids – and even adults – can jam and cram things into a backpack. The case itself is well constructed, with a crush-proof design that will last you for years.

Another nice thing about the headphones being foldable is that they’re also flexible. The ear cups can swivel 180 degrees, and can also flex in and out, which allows them to fit a variety of faces and head sizes. That said, they’re sized for kids and teens. If you’re an adult with a large head, the fit is going to be too snug. Adults with smaller heads will be able to get a comfortable fit. These headphones have a stylish design, with bright black/blue and black/pink designs and silver-gray swivels that really pop.

These headphones offer 22 hours of battery life, assuming they’re running at maximum volume. Since your child or teen is probably going to use them at this level – which, let’s remember, is perfectly safe – 22 hours is a good benchmark for real-life performance. If the battery should go dead, your kids can keep on listening, by using the included 3.5mm aux cable. Although in all honesty, how often are your kids going to go 22 hours without recharging? 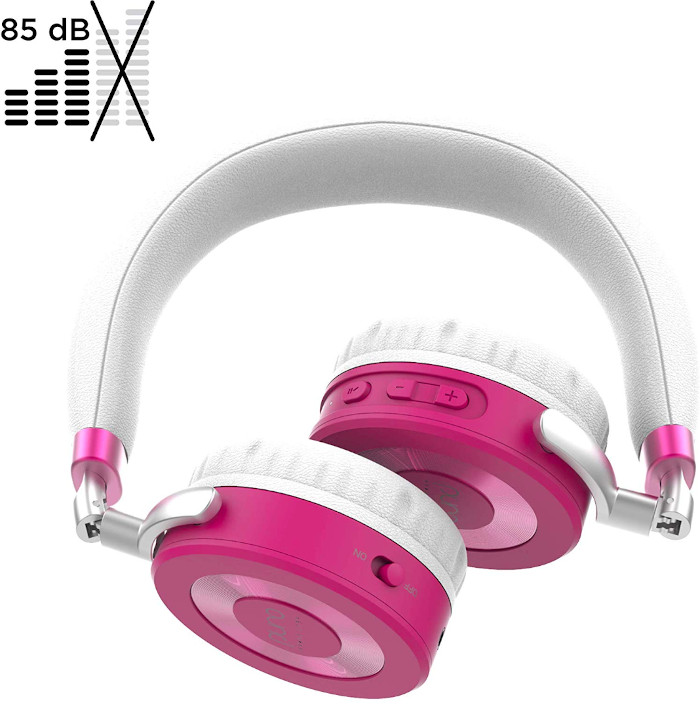 Not only can these headphones be used for listening to music or watching a movie, they can also be used for hands-free voice calls. Any chatty teenager is going to love that feature, and it will get them used to hands-free devices for when they grow up.

The control scheme is relatively simple. There’s a simple on/off switch on the left headphone, with a three-button control on the right headphone. The top and bottom buttons control the volume. The center button is used for answering and hanging up, or you can tap it to skip to the next song if you’re listening to a music playlist.

One really neat feature of the JuniorJams is their daisy chaining technology. This innovative feature allows you to link two pairs of headphones together, so two kids can listen to the same audio. You connect them with a 3 ½-foot USB cable, which comes with the headphones, so your kids will need to be sitting relatively closely together in order for this to be a viable option. Of course, you could always spring for a longer cable if you need to. Your connection to the audio source itself can still be either wired or wireless.

Your kids won’t experience any loss of quality while daisy chaining, and it’s primarily designed for use during road trips. With more than one kid, you can end up having to play the audio through the car speakers, and this can get irritating if you’re on the road for hours on end. This way, both your kids can hear their movie, and you won’t have to.

As we’ve mentioned already, a lot of kids headphones are low quality. Before, we were talking about ruggedness and quality of design, but this also applies to the quality of the audio. The JuniorJams provide high-quality sound that’s just as good as you’d expect from a pair of adult headphones.

This is in line with Puro’s history of good quality. The mids are clear, not muddy, and the highs are clear and crisp without any distortion or fizzle on cymbals. This significant attention to detail on a children’s pair of headphones is much appreciated. That said, the bass isn’t that impressive, but these aren’t studio headphones, and you’re not paying studio headphone money for them. 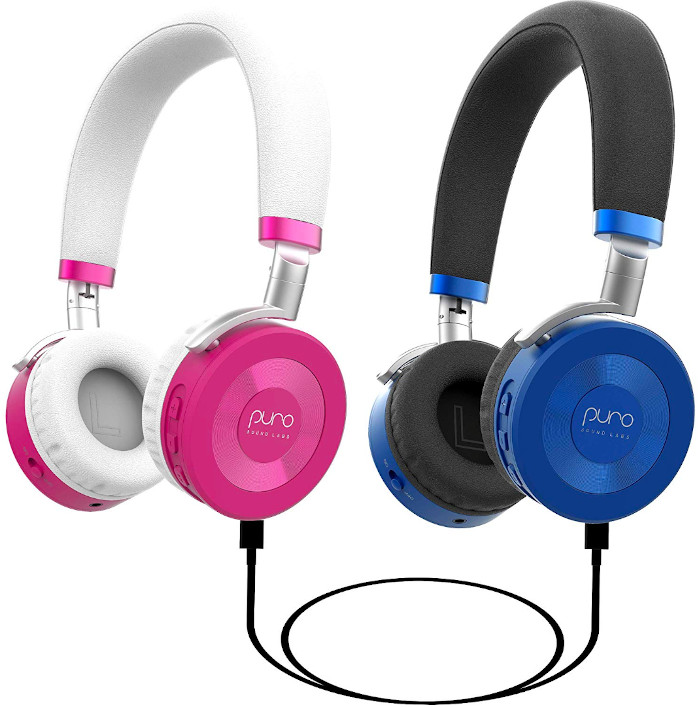 Another thing we’ve already talked about is the 85 dB limit. Now, if you’ve done your research, you’ve probably seen that 85 dB is the maximum allowed by OSHA for continued exposure, about the sound of a passing semi truck. That still sounds awfully loud, doesn’t it?

Here’s how decibel levels work in music. The limit is exactly what it sounds like. It’s the maximum noise level that’s allowed under any circumstances. However, music and movies have louder and quieter parts. The easiest way to illustrate this is with an action movie, say an Avengers film where there’s a huge explosion. The very loudest part of that explosion will hit 85 decibels. Everything else in the movie will be correspondingly quieter than that.

The same thing applies in music. Throughout a song or an album, music swells, fades, and hits highs and lows. Obviously, music is going to be louder on average than a movie, but it’s not going to hit 85 decibels constantly, or even during every song. 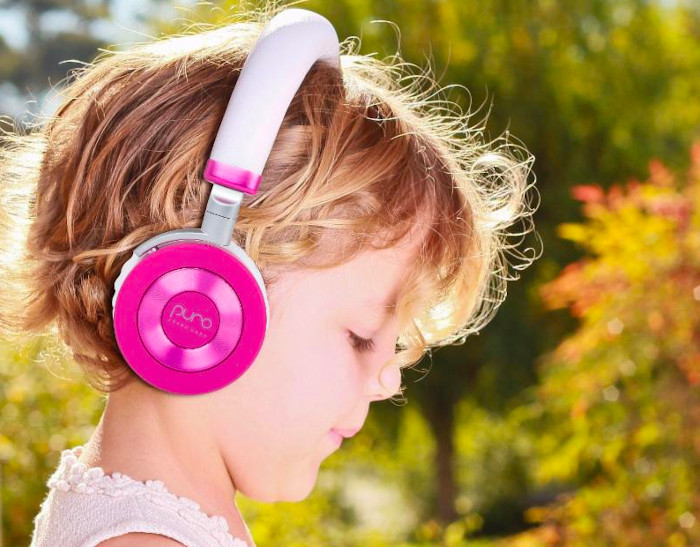 Now that we’ve taken a thorough look at JuniorJams, it’s time to sum up what we think about them. By organizing our thoughts into a simple pros/cons list, we can get a quick snapshot of what we’ve learned. Here’s how JuniorJams shook out: 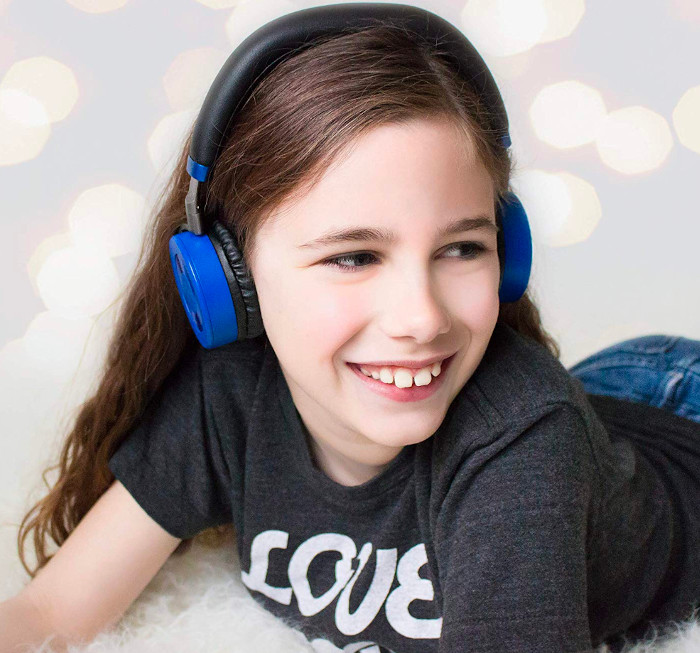 As we hope we made clear with our pros and cons list, we love these headphones. There’s a lot to like about them, and unless you have a large head there’s not much to complain about. That said, you might be looking for something completely different. Here are some other Bluetooth headsets we’ve reviewed that we think are worth your while. 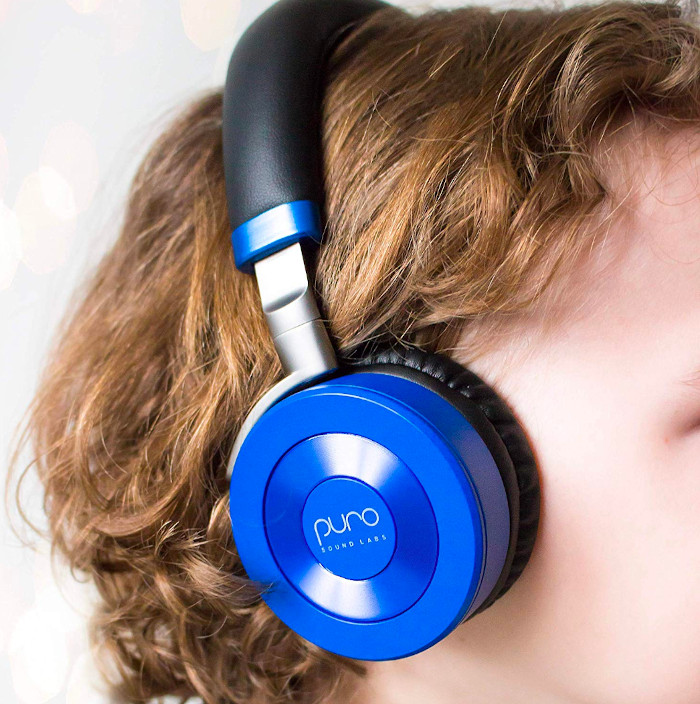 There’s clearly no shortage of choices when it comes to Bluetooth headphones. We’ve also talked about dozens of other audio devices, so no matter what combination of features you’re looking for, chances are you’ll be able to find it.

As we mentioned earlier, we’ve always been impressed with Puro’s past offerings, including the BT2200. We came into this review with high expectations, and Puro has not disappointed us with their latest offering. JuniorJams make a fantastic addition to their lineup.

For parents, the 85 dB volume limit is an excellent feature, and kids will appreciate the fact that the volume limiting has no negative effect on the sound quality. The comfortable build is durable, and won’t dig into your kids’ heads even if they’re wearing them throughout a long road trip. They’re a bit tight for adults, but that’s to be expected on a set of kids’ headphones. 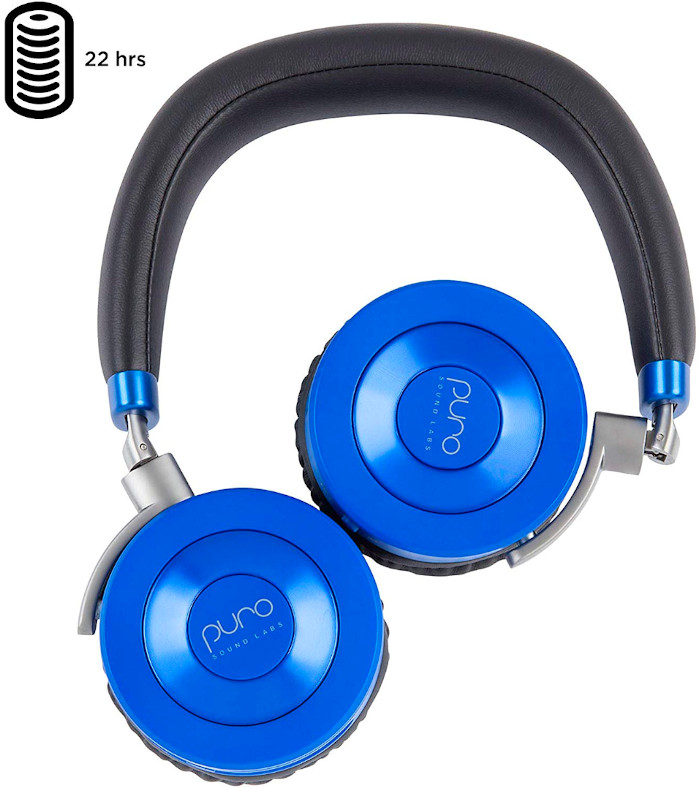 The daisy chaining feature is one that perhaps doesn’t get enough attention, and it should. If you have two kids and you’d like some peace and quiet on the road, they can share a pair of headphones, which means you won’t have to hear whatever they’re listening to. All in all, JuniorJams are a well-designed pair of headphones that are sure to be a favorite for years to come.