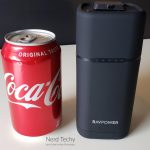 These days, we rely on our smartphones and laptops more than ever. We use them for social media. We use them to keep up with work while we’re on the road. We use them to get directions, watch movies, and listen to music. In many ways, this has been a boon for society. We’re more connected than ever before, and we have access to more information than ever. Unfortunately, it also places heavier strain on our batteries. There’s only so much you can do with your smartphone before you run out of juice. One popular solution is to use a portable power bank, which can extend your battery life considerably.

Unfortunately, where there’s an excess of demand, there’s usually an excess of supply. And power banks are no different. As a result, it can be tough to tell which ones are worth your money, and which ones aren’t. Today, we’ll be looking at the RAVPower 20000mAh Portable AC Charger (Power Bank). This is a powerful, versatile power bank with a ton of features. And it comes from a respected manufacturer with a long track record of making quality products. But is the 20000mAh Portable AC Charger the right choice for you? Let’s take a closer look at its features! 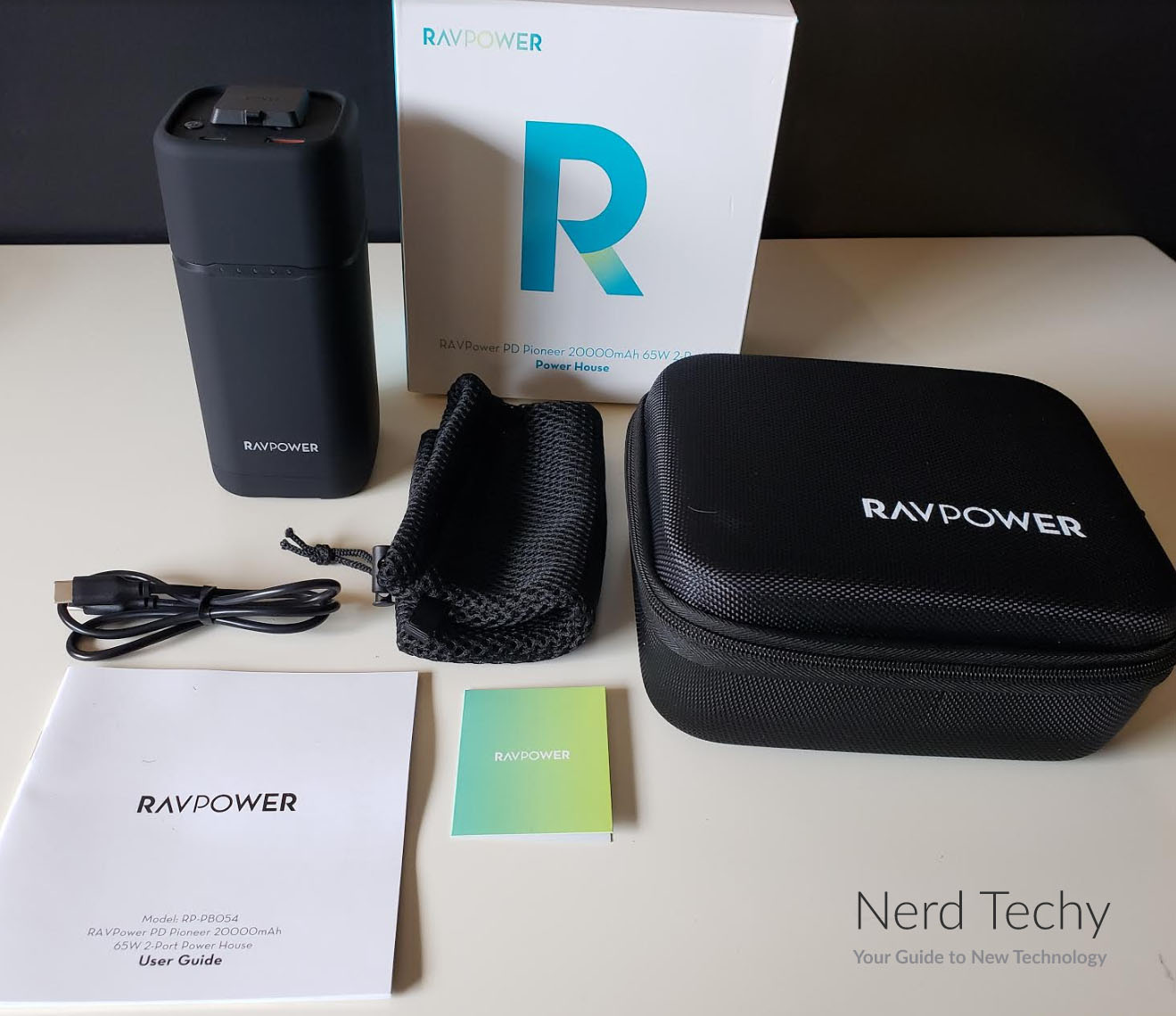 The RAVPower 20000mAh Power House (Model RP-PB054) is big and beefy. It measures 6.1 inches long, with a 2.7-inch square profile. It has clean, rounded corners, which makes it comfortable to hold in your hand. This also means it won’t gouge other objects while you’re carrying it in a bag. The total weight is 1.46 pounds. This makes it about 3 times the weight of a modern smartphone. So it’s a bit heavy, but not absurdly so. It sports an attractive matte black finish, which doesn’t get dirty easily, and looks good on your desk. Towards the bottom of the front face, there’s a white RAVPower logo, but it’s otherwise relatively plain. 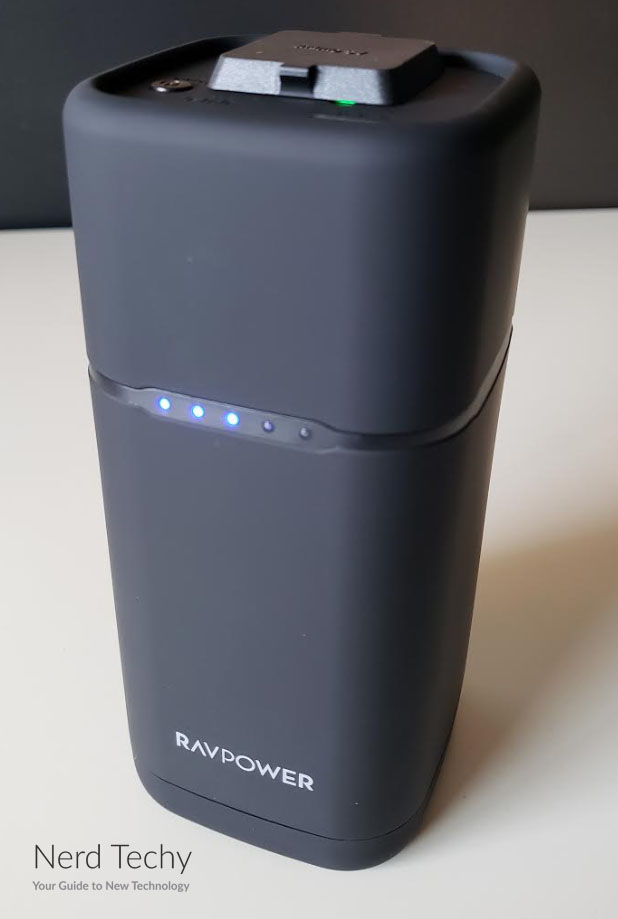 About two thirds of the way up the unit, there’s a narrow, recessed glossy band. Inside this band, on the front, there’s a row of five blue LED lights. These lights indicate the current battery status. When the power bank is in use, the lights will illuminate. Otherwise, they’re turned off in order to save battery life. At the bottom of the unit, you’ll find one of the 20000mAh Portable AC Charger’s best features. There’s a circular air vent, with a motorized fan behind it. When the power bank is used for an extended period, this fan will automatically turn on. It draws air in through vents on the top, sucks it through the inside, and blows it out the bottom. On the one hand, this makes the power bank exceptionally safe. On the other hand, it does produce some noise during extended use.

At the top of the 20000mAh Portable AC Charger, you’ll find all of the power ports. The first is a Quick Charge 3.0 USB Type-A port. This port has a bright orange internal tab, which makes it easy to orient your USB plug. The second is a USB Type-C port. This port functions both as an input and an output, which makes it highly versatile. The last port is a simple two-prong AC power port. This is the main attraction of the 20000mAh portable AC charger. It’s what sets it apart from other, similar power banks. There’s a small flip cap that covers the AC port when not in use, and prevents debris from getting inside. 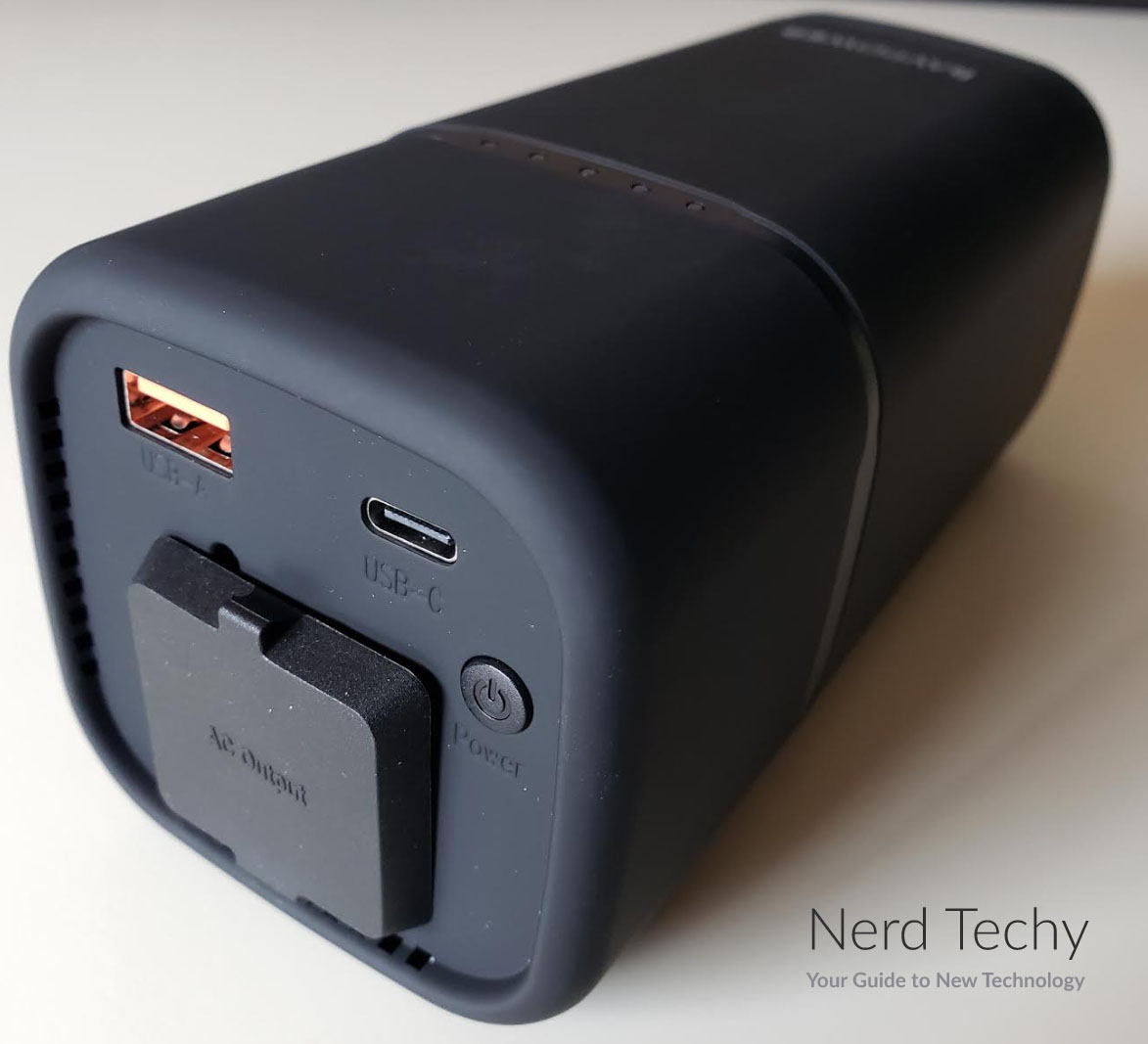 In addition to the power bank itself, the kit also includes a few helpful extras. To begin with, there’s a USB Type-C to Type-C charging cable, which measures just under 24 inches in length. This is enough for most purposes, and longer than your typical 18-inch cable that comes with many power banks. There are also two different storage containers. The first is a small nylon carrying pouch. This is great if you’re throwing the power bank in a day bag. For longer trips, RAVPower has also included a sturdier zippered storage box. The box is big enough to hold not just the power bank, but also the carry pouch and the cable. Everything is guaranteed by RAVPower’s 18-month warranty, so you’ll be protected from any manufacturer’s defects. 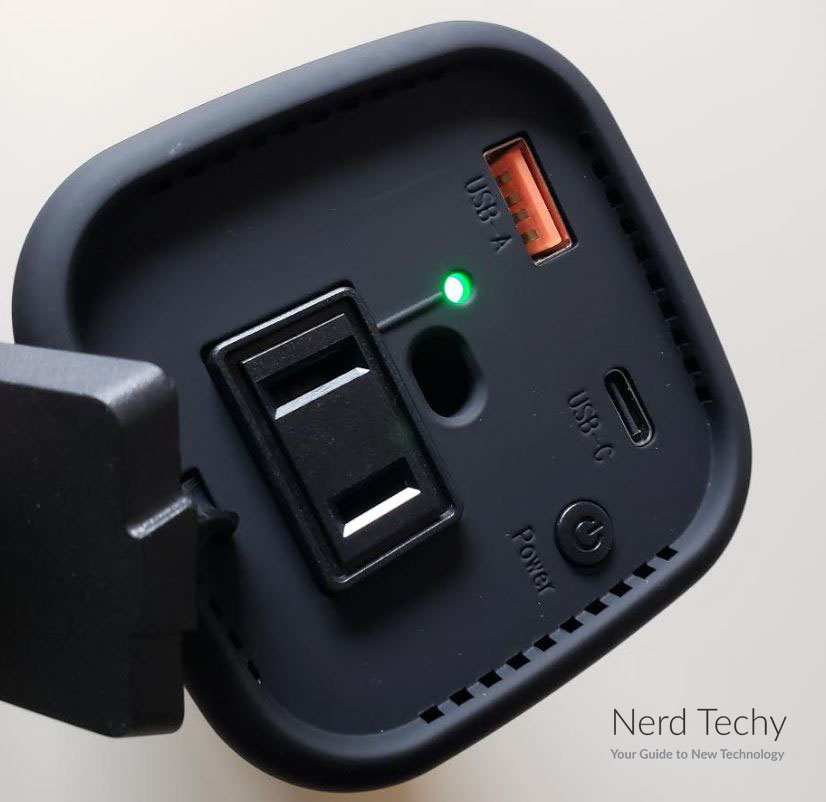 The total capacity of the RAVPower 20000mAh Power House is in the name; it’s 20,000mAh. But what does this mean? Let’s compare it to a few popular devices. The iPhone X, for example, has a capacity of 2,716mAh. The Samsung Galaxy S8 is a bit beefier, with a 3,500mAh battery. Moving up the scale, the Nintendo Switch uses a 4,310mAh battery. The MacBook Pro 16 is about twice that, with a capacity of 8,818mAh. In other words, this RAVPower charger can fully charge just about any device multiple times.

About the only exception to this is the MacBook Air, which sports a massive, 27,000mAh battery. In this case, the RAVPower 20000mAh Portable AC charger is a serviceable backup. But it won’t actually charge your laptop to 100 percent. If you need a more powerful power bank, check out our review of the Crave PowerPack 2. It has a truly insane 50,000mAh capacity, some of the highest on the market. Keep in mind though, that this capacity comes with significant weight and bulk. 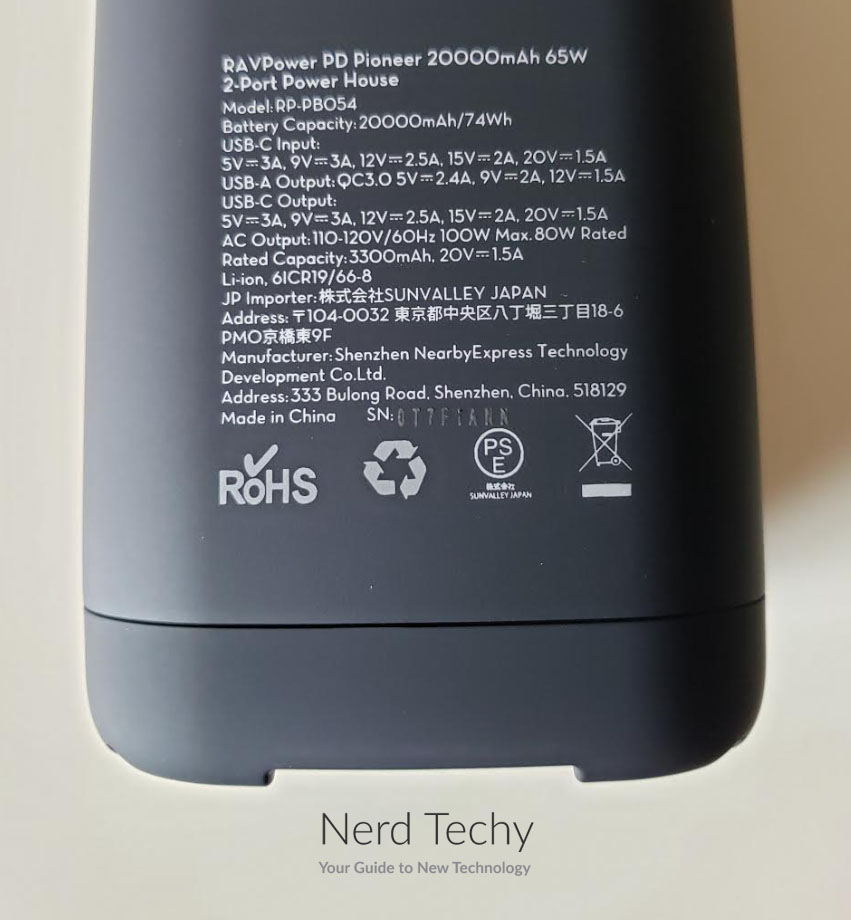 With that being said, there are some benefits to a power bank with slightly less capacity. The reason is that the TSA limits power banks on flights to 100 watt-hours. Generally speaking, any power bank with 30,000mAh of capacity or greater is going to exceed this limit. Meanwhile, the RAVPower 20000mAh Portable AC Charger has a capacity of 74 watt-hours. In other words, it has plenty of capacity, but there aren’t any issues with traveling.

Even with its relatively powerful battery, this RAVPower power bank will charge fairly quickly. When charging with a 30W or greater PD charger, you can fully charge it within 3.1 hours. There’s none included in the kit, so you’ll need to provide your own. Thankfully, RAVPower already manufactures one. The RAVPower 90W 2-Port USB-C Wall Charger can push up to 90 watts. Not only can you use it to charge your power bank, you can charge your laptop with it at home. If you’d rather not spend any extra money, you can just use a normal USB Type-C port for charging. In this case, the RAVPower 20000mAh Portable AC Charger will fully charge in just under 8 hours. 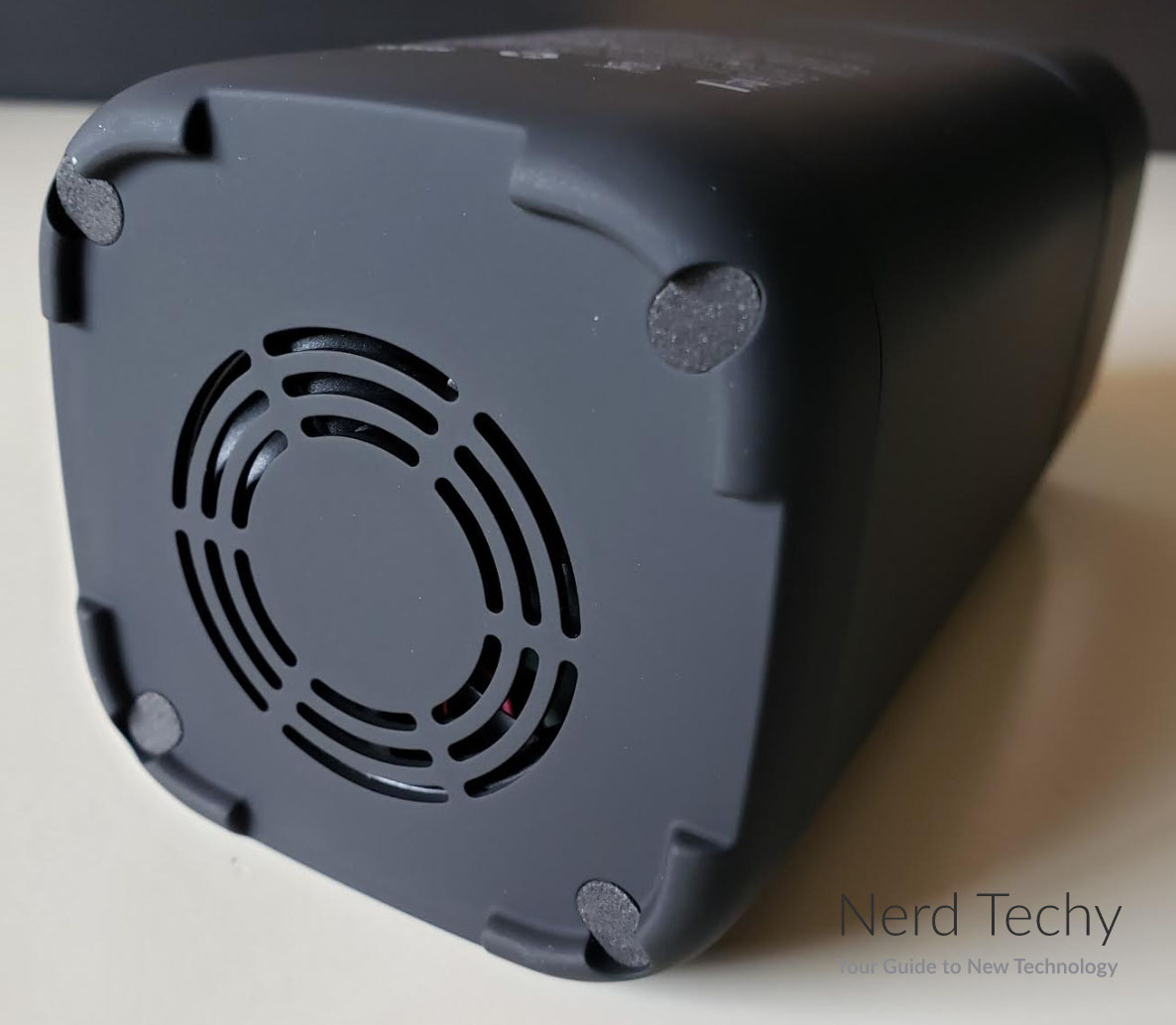 So, what type of devices might you charge with the RAVPower 2000mAh Portable AC Charger? Let’s start with the PD-compatible USB Type-C port. It delivers up to 30 watts of power. This is enough to power just about any modern laptop while you’re using it. In other words, you won’t have to shut down your laptop and charge it before you can use it again. Of course, it’s also perfectly well-suited for use as a simple charger. It’s relatively quick, and will charge a 12-inch MacBook in about 2 hours.

Let’s move on to the Quick Charge 3.0 USB Type-A port, which supplies 18 watts of power. This is designed to charge most modern smartphones, which are quick charge compatible. You can charge an iPhone X or Samsung Galaxy S8 in less than an hour. Of course, you can use it to charge an older smartphone via Micro USB as well. You just won’t get to take advantage of the more powerful Quick Charge technology. 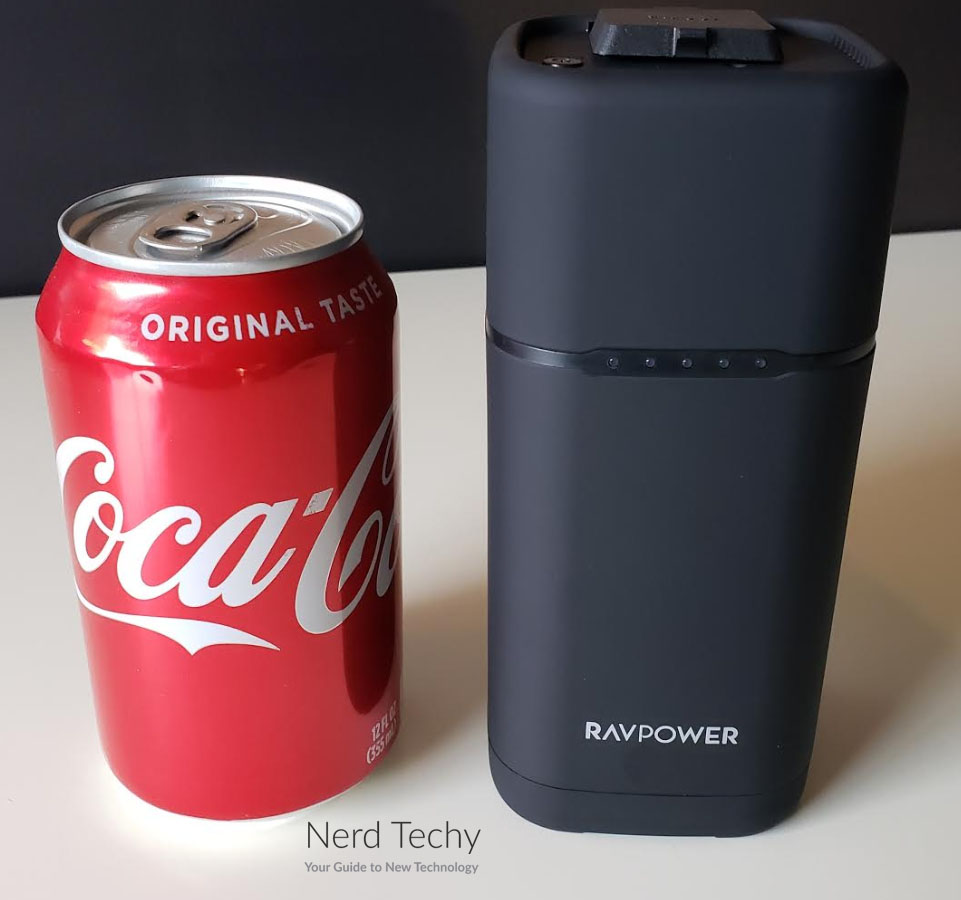 Finally, let’s take a look at the 2-prong AC power port. It provides 80 watts of power, so let’s clarify what it can and can’t do. Most wall outlets provide 1,800 watts of power. In other words, you can’t use the RAVPower 20000mAh Portable AC Charger to run a vacuum cleaner. Similarly, you can’t run a projector or modern game console. The one exception to this is the Wii U, which draws about 32 watts. That said, you can use the AC plug for charging devices with AC chargers. For instance, you can charge an older laptop that uses a nonstandard barrel adapter.

One thing you’ll notice about the RAVPower 20000mAh Portable AC Charger is that it’s a bit pricey. This isn’t a bad thing. It’s about what we’d expect for a power bank with this many features. That said, if you need fewer features, there are plenty of good power banks with 20,000mAh of capacity. One of these is the RAVPower 20000mAh Portable Charger (Model RP-PB172). It has two USB Type-A ports, as well as a PD-capable Type-C port, at about half the price. 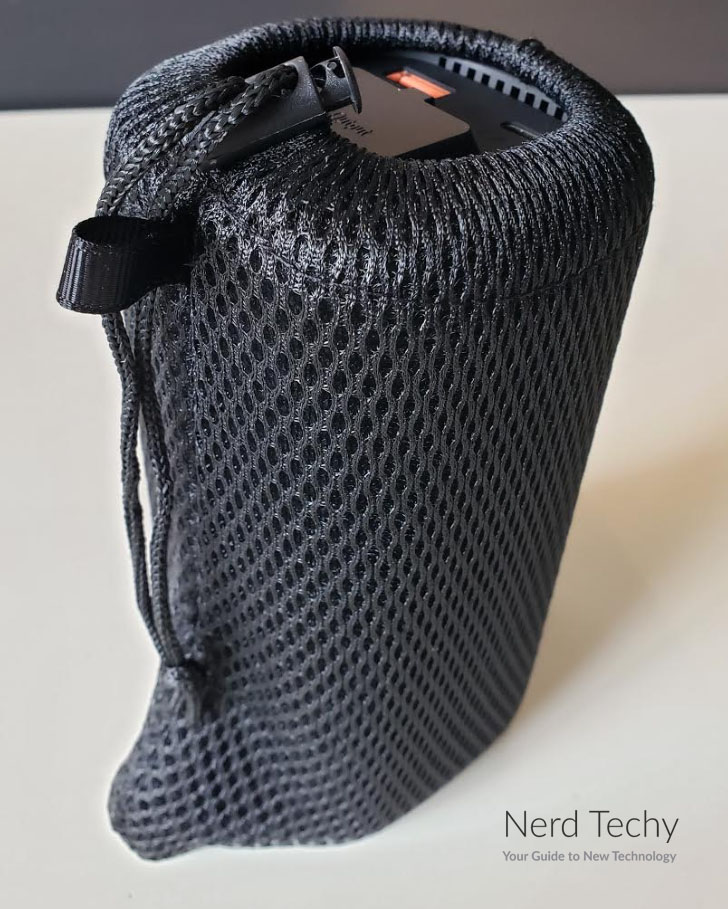 So, should you buy the RAVPower 20000mAh Portable Power House? It depends on what you need. If you’re just looking for a smartphone charger, you’re probably overspending. But if you need a great laptop charger, especially for an older laptop, you’re looking at a great choice. The most obvious benefit is the built-in AC outlet, which lets you charge older laptops and even drones. In addition, the PD and Quick Charge ports are great for most laptops and smartphones. Not only that, but this RAVPower power bank is exceptionally safe. Most modern power banks offer protection from overheating, but the built-in fan makes it even safer than most. The accessories are also a plus. We particularly liked the hard case, which makes this RAVPower power bank a solid choice for air travel.