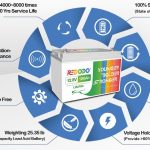 If you’re using solar panels for power, congratulations! You’re contributing to the health of the planet. But solar panels have a major drawback; they only work when the sun is shining. This isn’t an issue if you’re connected to the grid.

Thanks to net metering, you can sell excess solar power back to the utility company during the day. At night, you’ll still be able to draw power from the grid. The same goes for cloudy days where your solar output is produced, or if your panels are covered with snow.

But what if you’re not connected to the grid? In that case, you’ll need to have a backup battery system. During the day, your solar panels will charge the batteries. At night, you’ll be able to draw power from them. You’ll have your own environmentally-friendly source of energy that operates 24/7.

Typically, homeowners will do this with an array of 12- or 24-volt deep cell batteries. Why 12-volt batteries? Because they’re a convenient size to work with. More importantly, they’re what most power inverters are made for. These batteries are easy to use without installing a bunch of complex, exotic equipment.

Of course, 12-volt batteries aren’t used only for off-grid houses. They can be used as backup systems for ordinary residences, for when the mains power goes out. You can also use them in series in an RV to provide 24-volt power when your engine isn’t running. You just need to find the best battery for the job.

Today, we’ll be reviewing the Redodo 12V 100Ah LiFePO4 Deep Cycle Battery. This is a compact, affordable battery that still has all the safety protections you expect from a deep cycle battery. It’s also surprisingly durable, with a 2,000-cycle duty rating and a 5-year manufacturer’s warranty.

But there are other factors that go into making a good quality battery. We need to examine the battery’s physical construction, and how well it’s put together. We’ll have to talk about the capacity, and how it can be wired into a larger system. We’ll also have to talk about what it’s capable of powering. After that, we’ll be able to render a fair verdict. Let’s begin! 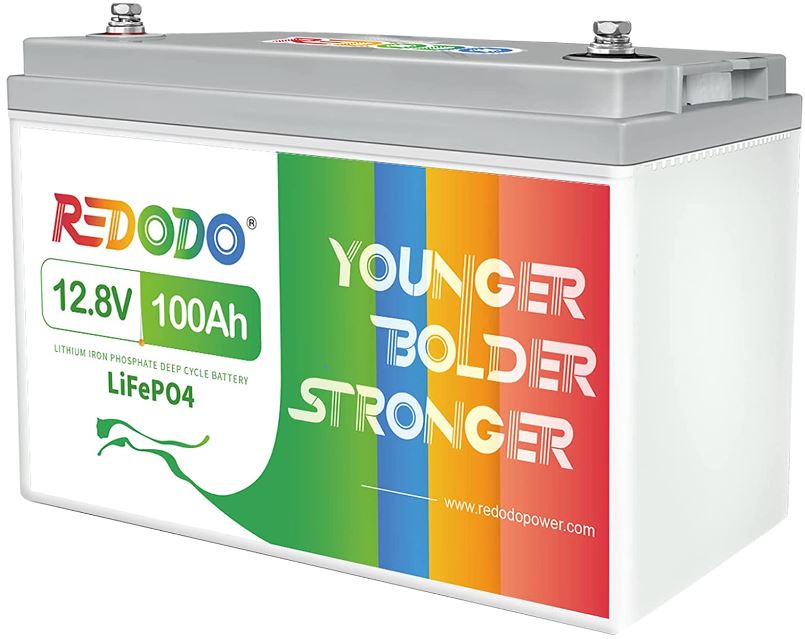 Like most 12-volt batteries, the Redodo 12V 100Ah LiFePO4 Deep Cycle Battery has a utilitarian design. It’s a rectangular block that measures 13 inches wide and 6.8 inches deep, and stands 8.5 inches high. It weighs a touch over 25 pounds, so it’s a bit heavy to lug around. Then again, it’s not like you’ll have to move it that open. Once it’s installed, it just sits there and does its job. 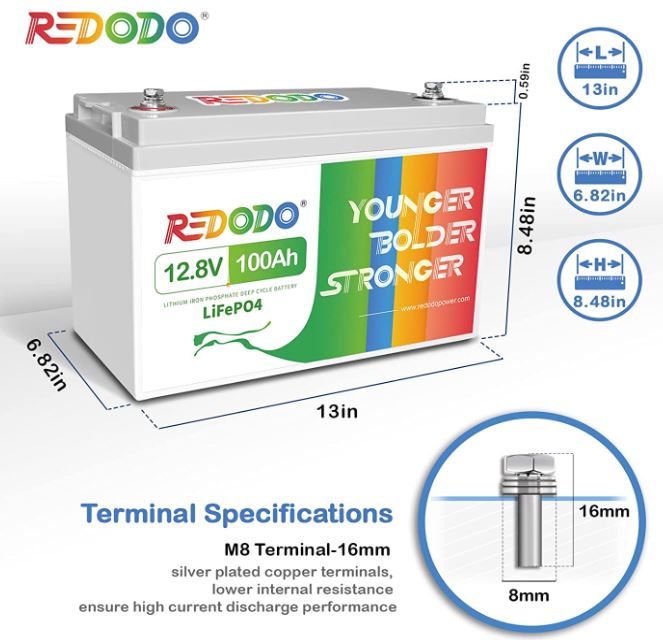 The bulk of the housing is constructed from a smooth white thermoplastic. It’s tough and as rugged as any good quality battery. We wouldn’t drop it on the ground on purpose, but it could probably take the abuse. The top of the housing is grey, with little cutouts in the sides for lifting it by. There’s a lot of rainbow Redodo branding that we could have done without. But ultimately, nobody cares if your 12-volt battery is ugly.

Furthermore, you can use the battery in damp environments. It’s IP65-rated for weather-resistance, which is pretty impressive for a battery. The 6 means that it’s entirely impervious to dust, which isn’t all that surprising. But the 5 indicates that it’s more than just splash-proof. You can actually hose it down to clean it off. Just keep in mind that we’re talking about a device with two exposed, live electrical terminals. Use common sense, and never get the battery wet on purpose when it’s wired into a circuit. 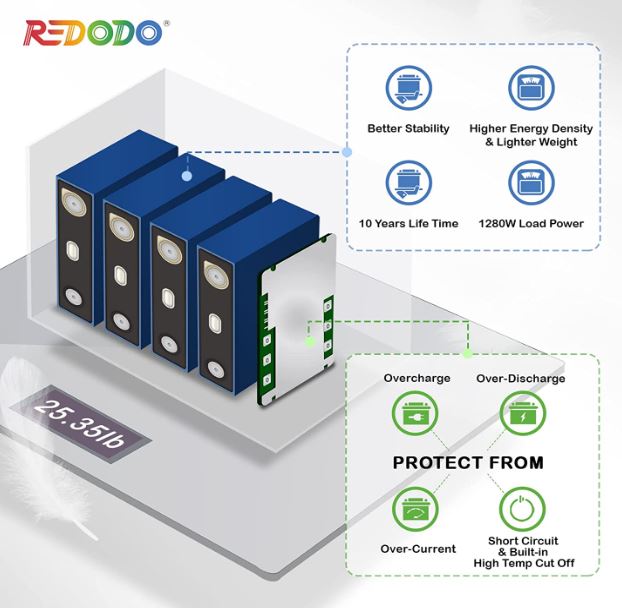 Installing the Redodo battery is a pretty standard affair. At the two front corners of the top panel, there’s a pair of metal terminals, which stand 0.6-inch high. These are simple threaded posts with nuts on them. You remove the nuts, attach your wires, and screw the nuts down on the terminals. That’s the same way most 12-volt batteries work.

You can also build more than one of these batteries into an array. You can wire up to four of them in parallel, for up to 12 volts and 400 amps of power. If you want to boost the voltage, you can wire it in series. With four wired in series, you’ll get 48 volts and 100 amps. You can wire up to eight batteries together in total. This means a practical maximum of 24 volts, 400 amps, or 48 volts, 200 amps. Either way, you’re looking at a maximum power output of 10,240 watts when eight batteries are used. 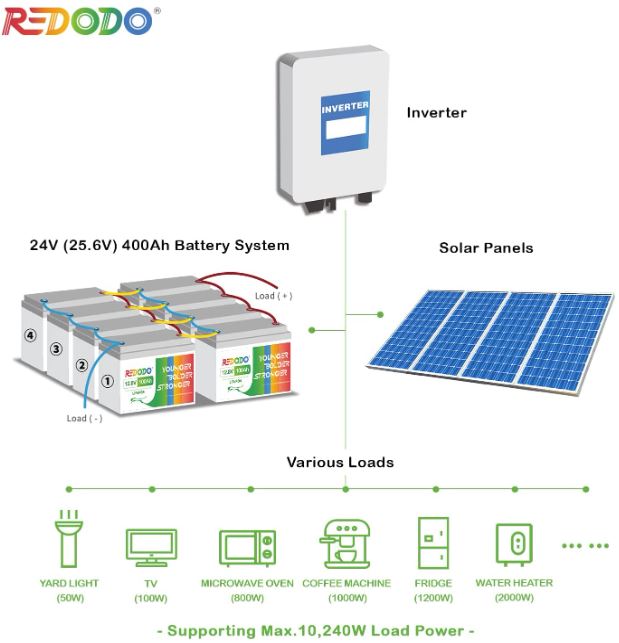 If this sounds a bit complicated, you don’t need to panic. Redodo offers 24/7 phone support for all of their customers. If you’re struggling with an installation, you can always call for help.

But what if you want a battery with different capabilities? If the Redodo battery doesn’t scratch your itch, there are plenty of well-engineered choices. Check out our list of the best 12V LiFePO4 batteries for our top suggestions. 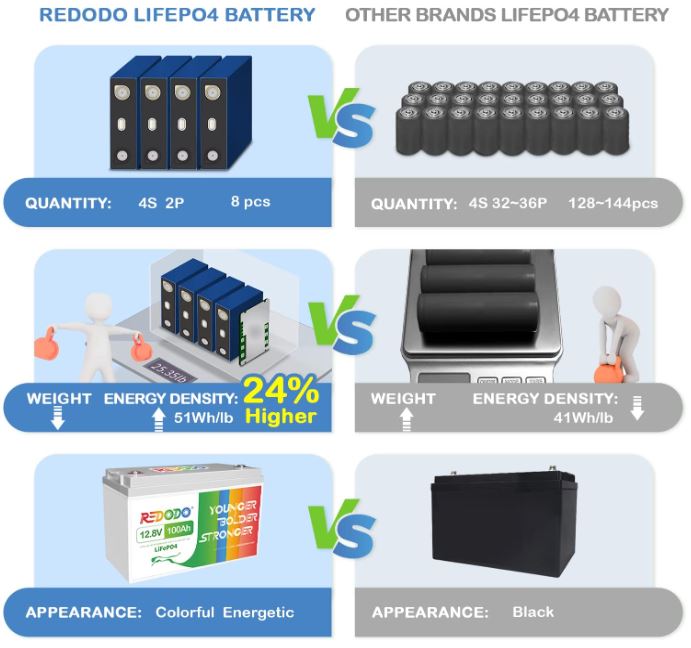 The same is true for the capacity. A single battery has a capacity of 100Ah. If you’re running a 1,000-watt griddle, that’s enough power for a little longer than an hour and fifteen minutes. However, if you’re wiring them in parallel, you’ll have 200Ah or 400Ah of capacity. 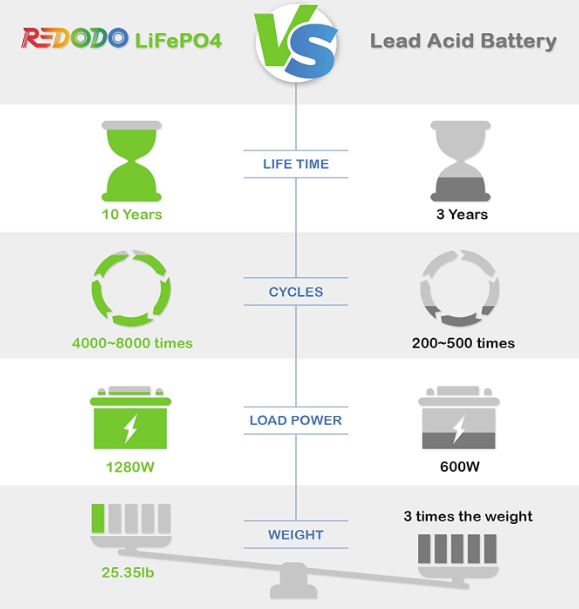 If you’re looking for another large battery, consider the Power Queen LiFePO4 battery. It’s big and beefy, with a capacity of 300Ah and convenient carry handles on the side. Then again, it’s also correspondingly more expensive. 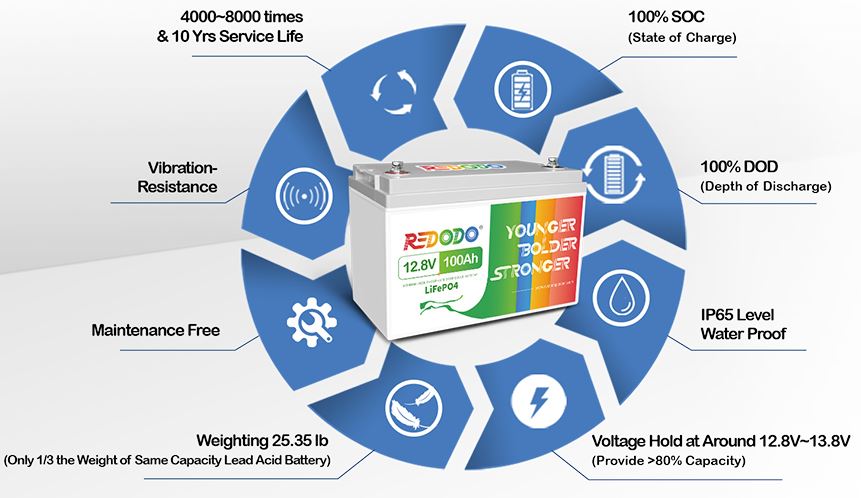 This is the industry standard way of measuring a duty cycle rating, so 2,000 is the more accurate number. Even so, you’re looking at a long-lasting battery. You also get a 5-year manufacturer’s warranty.

This battery has advanced safety features to protect itself as well as anything it’s wired to. To begin with, it has over-charge and over-discharge protection. If it’s fully charged, it won’t keep trying to draw power from your solar panels and damage its own cells. And it won’t discharge to the point that it becomes completely un-chargeable. Over-current protection will shut the battery down if incoming voltage exceeds 14.6 volts. Short-circuit protection will keep it from causing damage due to a crossed or damaged wire. 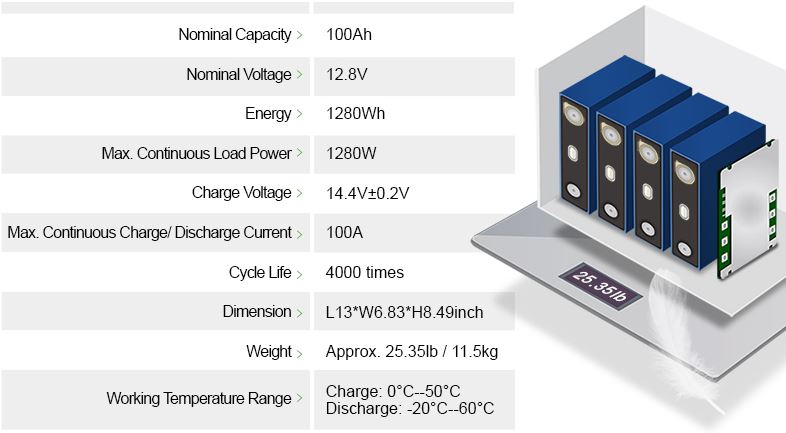 In addition, the Redodo battery has a temperature sensor that shuts it down if it starts to get too hot. You don’t have to worry about starting a fire because your battery got over-stressed. Unfortunately, there’s no low-temperature cutoff. Most modern batteries will automatically reduce their output when the temperature gets too cold. Because this battery doesn’t, it can over-discharge if used below 0˚F.

What Are the Benefits of LiFePO4 Batteries?

Before we deliver our verdict, let’s talk about LiFePO4 technology. What is it that makes this type of battery different from other types of battery, such as lead-acid or lithium? Here are some things to consider:

What Are the Drawbacks of LiFePO4 Batteries?

The Redodo 12V 100Ah LiFePO4 Deep Cycle Battery is a well-engineered deep cycle battery. It’s tough enough to take a beating, and weather-resistant enough for outdoor use. It can be built into a larger battery bank, or used by itself. It also has a number of safety features, and is rated for 2,000 duty cycles. If you need an affordable 12-volt battery, this is an excellent choice.