Without the right tools, you never truly know what’s going on with these ports. Many devices, such as monitors, can draw power from your USB-C port. But when your laptop is powering both your internal display and an external one, how will your battery life be impacted? And what about that new charger you just bought? Can it charge your laptop just as quickly as the stock charger?

The Satechi USB-C Power Meter is an inexpensive tool designed to help you answer these questions. We decided to put it to the test, and see if we could answer a few questions for ourselves while we were at it.

The Satechi USB-C Power Meter is a compact little device that is designed to be operated in-line with your USB-C devices. This means that you plug the meter itself into your USB-C port, then your charger plugs into the back of it. On the face of the device, there is a compact OLED display that provides some information about the current that is passing through it. It’s pretty simple in terms of functionality, but we were still surprised at just how useful the output wound up being.

When you first hold this power meter in your hand, you’ll notice the similarities to a standard USB flash drive. It’s ever so slightly tapered out from the USB-C port, making it a little larger than your typical USB peripheral but still reasonably compact. We liked the size because it allows the meter to sit comfortably in your USB port. Remember, there is going to be pressure on it from both sides. When we had it installed in our MacBook, it’s thickness allowed it to rest on the ground instead of floating in the air, supported by the USB port. This reduces strain on the USB-C port, so we didn’t have to worry about damaging our computer. 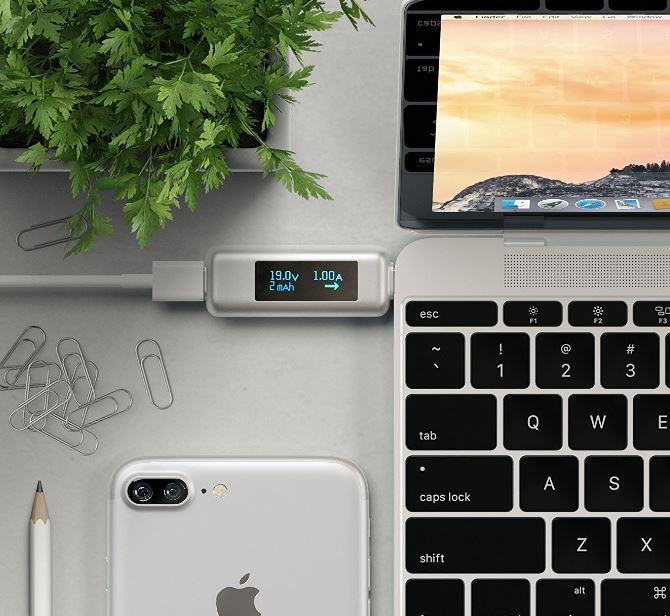 The plastic case is fairly rigid, and built to the same standard as any USB drive. It feels solid in the hand, and we don’t see ourselves breaking it from daily use. That being said, we don’t recommend you abuse it in any way. But it’s not the enclosure that caught our attention the most, it’s what was inside. The black OLED display contains bright blue LEDs that are extremely clear and easy to see, but aren’t hard on the eyes at all. We constantly caught ourselves glancing over from the laptop screen to check the charging rate and power consumption.

One of the nice things about USB-C is that it’s reversible. Although there are USB 3.0 power meters available, if your USB ports are oriented the wrong way you’ll have the screen facing the ground, negating the usefulness of the meter. But this is not the case with USB-C, since you can always flip it over.

There are three measurements on the face of the meter and one indicator. It measures voltage, amperage, and amp-hours. Generally, people think of power in terms of watts. In reality, watts are determined by multiplying the voltage by the current. Voltage shows the potential electrical charge, while amperage is more of a measure of the volume of electrical flow. 1 amp of current at 120V is ten times more powerful than 1 amp at 12V. This is easy to see with a wattage measurement, as 120W is clearly 10 times larger than 12 watts. 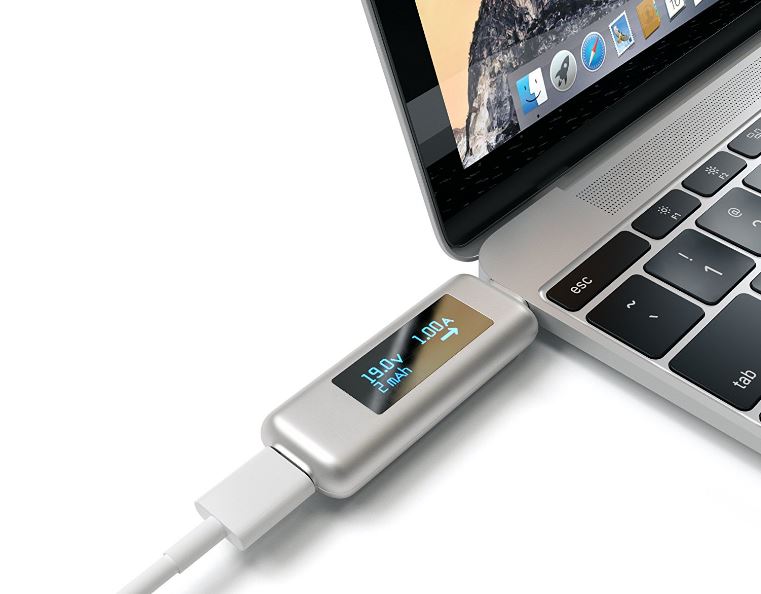 But from a measurement perspective, it makes more sense to measure current this way. This is because the total power consumption is shows in mAh, or milliamp hours. A milliamp is 1/1000 of an amp, and battery capacity is always measured in terms of mAh. Let’s say, for example, that you had a phone with a 3000 mAh capacity. If it was charging at a rate of 1A, it would be pretty easy to tell that the battery will be charged in 3 hours.

This is also great for determining the real-world capacity of a battery pack. Let’s say, for example, that you purchased a ***20,000 mAh battery pack. This doesn’t necessarily mean that you’ll get 20,000 mAh out of it. If the battery pack is rated for 12V and you’re charging a 19V device, there will be some loss in the conversion. Using this meter, you can find out exactly how much usable current is provided to your laptop, and get a proper estimate of how useful the battery is. 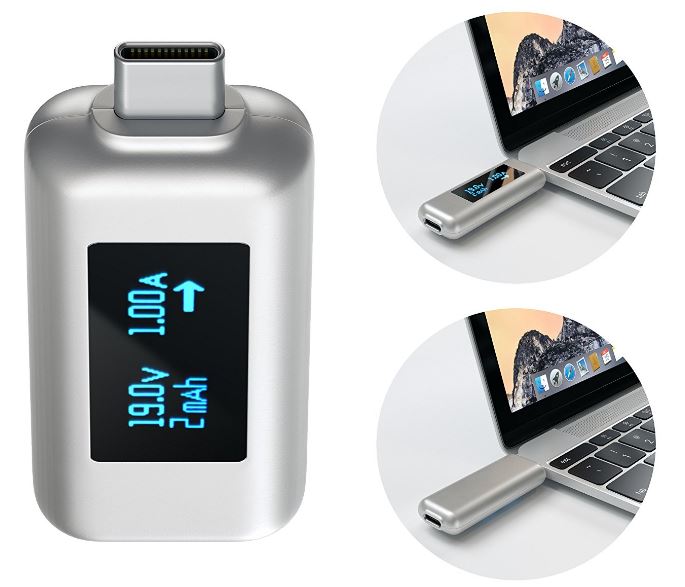 One of the biggest flaws with USB 3.0 power meters was that they did not support data pass through. This meant that you could only use the meter on a cellphone, or other simple charger. If you tried to transfer data through it, it simply wouldn’t work. Obviously, this is not idea with USB-C since you have so many devices on the same hub, many of which are heavy data users. That is why we were happy to learn that this device is fully compliant with the USB-C standard, so you can connect anything you want to it without any compatibility issues.

When we first got this meter, we thought that it would be something that we’d use for a little bit, then lose interest. After all, once you know how your batteries behave, you won’t need to know again for the future, right? 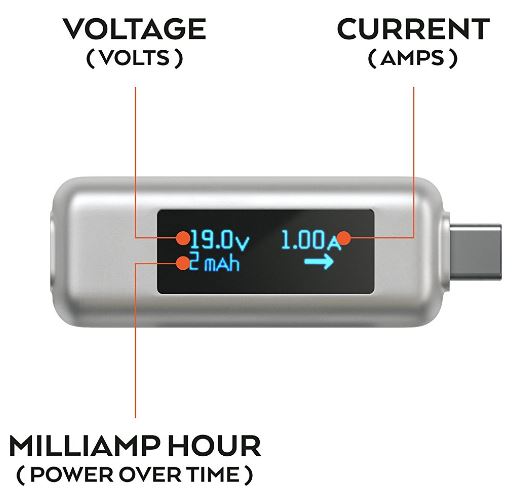 What we found was quite the opposite. We found several scenarios where the meter was incredibly handy to have. One example was measuring charge when using our USB-C docking station. This dock allowed us to plug in some external hard drives, a monitor, and our laptop charger all into one USB-C port. But while these devices are in use, the power that we intended to use to charge our computer is being diverted to run our peripherals. With everything hooked up, our laptop was only charging at about 75% of its normal rate.

Another thing we found was that some USB-C cables have more loss than others. The cable we got with our Pixel phone is one of the best of the bunch, with a volt drop of only 0.1V. Meanwhile, some cheap cables we got online have volt drops of 0.5V each.

We also learned how much electricity all of our peripherals use. After having this meter for only a few short days, we realized that it was beneficial for us to unplug our external hard drive when not in use.

There were two small issues we found with this power meter. First, the meter will only turn on when power is applied. If you plug an official Apple MacBook charger into the meter without connecting it to your computer, nothing happens. Once you plug it into your laptop, the screen turns on as power starts to flow.

But not all chargers behave this way. Some will supply power when any device is connected. This means that it’s possible to power up this device when not plugged into a laptop. It’s not a good idea to leave a charger on all the time without charging, so we recommend only using it when you can connect a device to both ends.

The other issue is that the screen doesn’t rotate. When it’s on the left side of your computer, the text is upright. But on the right side, text appears to be upside down. This is something we hope to see fixed in future versions. 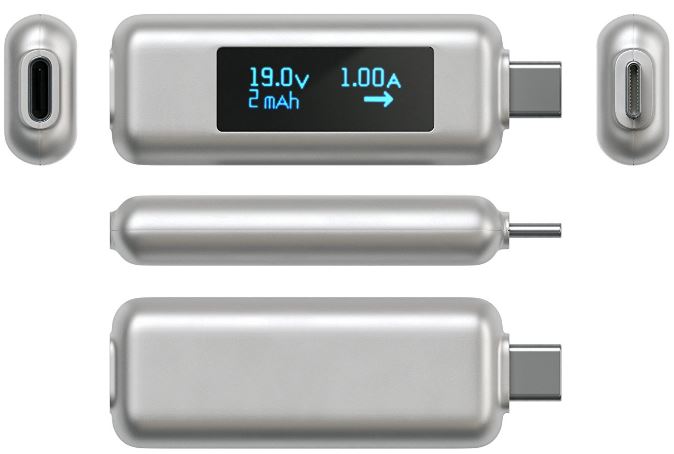 Although we didn’t expect much at first, we were pleasantly surprised to find out how useful a USB-C power meter was. This inexpensive device provided us with a window into how our technology was working, allowing us to intelligently determine the best way to use our devices.

Now, the Satechi USB-C Power Meter isn’t going to be for everyone. If you’re only using a single USB-C device and never plan on straying from the manufacturer stock chargers, the use is a little more limited. But if you ever have multiple devices on one port, or want to see if you can make your devices charge faster, this is a great buy.

If you’re looking for more ways to make use of your USB-C port, we’d highly recommend picking up a USB-C docking station. This allows you to take the seemingly spartan connectivity of your new laptop and open up the ability to connect a plethora of devices. Of course, these hubs should definitely be used in conjunction with this power meter, so you’ll be able to prevent your battery from draining too quickly.