With so many budged minded projectors on the market, it’s easy to mistake a projector for an affordable alternative to standard televisions. While that may be true in some cases, there is still a loyal following of home theater enthusiasts who use projection technology to create a multimedia environment unlike anything that a television could provide.

If you’re ever had the opportunity to see an affordable projector next to a premium model, you know first-hand just how impressive a good projector can look. Ultra-bright colors, a razor sharp image, and a larger than life display are all available to you, provided you make the right choice.

So, what exactly is the difference between the $300 projector your boss uses for his PowerPoint presentations and the high-performance models used in theaters? It’s all in the engineering. Sony’s VPLHW45ES projector has some unique elements that set it apart from other projectors. On paper, it seems like it will provide an experience unlike anything we’ve seen before. We decided to go hands on, and find out if Sony’s unique SXRD technology is everything it’s cracked up to be. 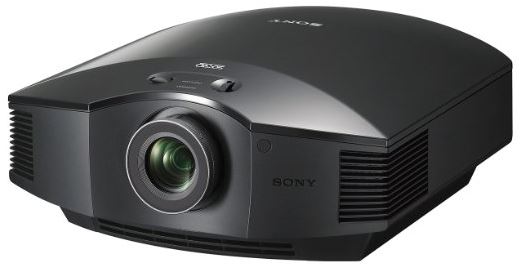 The Sony VPLHW45ES is, physically speaking, one of the largest consumer projectors we’ve had the opportunity to review. Measuring 23 x 20 x 11.5 inches, we definitely had to put a little thought into placement. Ideally, this is something that would be roof mounted, putting it in the ideal position for use with your screen. To give you flexibility in where you mount it, Sony’s included a number of optical feature that allow the image to be adjusted to your exact needs, and located the ports in such a way that cable management is easy. This allows for a screen size ranging from 40″ to 300″.

The biggest selling feature of this projector is the SXRD technology. Silicon X-tal Reflective Display means that this projector is a bit of a hybrid between the two most common imaging technologies in use today. With LCD projectors, light is sent through a partially transparent LCD display before being enlarged optically. With DLP technology, three monochrome displays are each sent through a red, green, or blue filter and combined into a single image. Both technologies have their advantages and disadvantages, but SXRD technology has the best of both worlds.

Like a DLP projector, the image is generated by three separate monochrome displays. Instead of being transparent, these displays have a mirror finish on the back. Light is sent against the display, where it is then reflected if the pixel is not activated, and not reflected if it is.

This is superior to competing technologies due to its reduced light loss. Any time you send light through an opaque medium, some light is inadvertently lost, even if it was intended to hit your screen. With these mirror finish displays, virtually all of the light is transmitted to the lenses. These screens also allow for much more precise control of light flow, creating an image that is much higher in contrast.

Converting a video signal into something that can be divided up between the three displays is not an easy task. To improve performance, Sony is now using a separate image processor for each internal display. This allows for virtually lossless processing, providing users with three times the image processing power of the older single-chip systems. 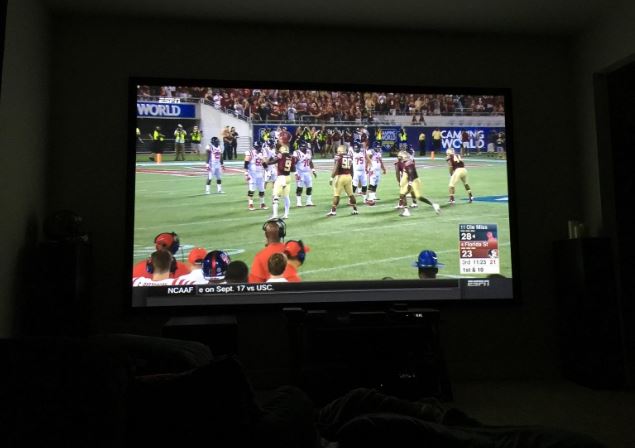 Once we learned about how this projector works, we couldn’t wait to see how it looked in person. From the first time we turned it on, we were blown away by how cinematic the colors looked. The vibrancy is very much comparable to that of a plasma TV. Colors are smooth, realistic enough to be believable, yet still maintained their artsy feel. The overall tone of the image is very well presented, although it’s ever so slightly on the neutral side.

The standard setting is ideal for those of you who prefer a more analytical image, but if you’re looking to get creative there are a number of calibration presets you can choose from. Think of them like subtle Instagram features, each of which are designed for specific applications. We found ourselves using Cinema Film 1 & 2 the most. The first filter is designed to give the projector the highest dynamic range possible, allowing for a wider spectrum of colors to be produced. 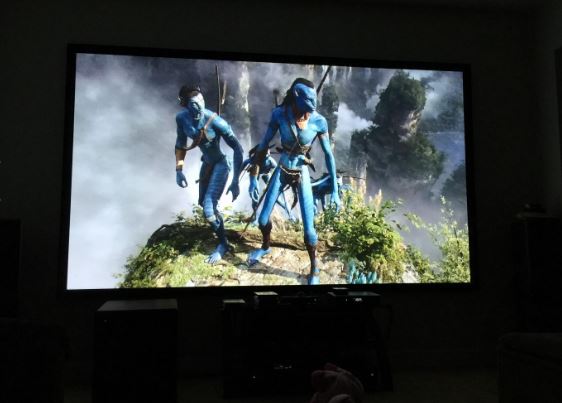 Images seem to pop out of the screen, and have a little more life to them. Cinema Film 2 is more of a rich setting, which helps to recreate the atmosphere and mood the movie producers intended for. This is a dynamic setting where the overall color will be shifted towards the predominant color in the movie. Blue prominent scenes take on a cool tone, while brightly colored scenes have a warm, welcoming feel to them.

Reference, to us, felt a little muted. But it’s designed for anyone engaging in video editing, or who is running color calibration equipment with the projector.

Overall, we were happy with the image quality straight out of the box. But for the connoisseur, there is plenty of features to dive into that allow you to get the exact coloring you want. 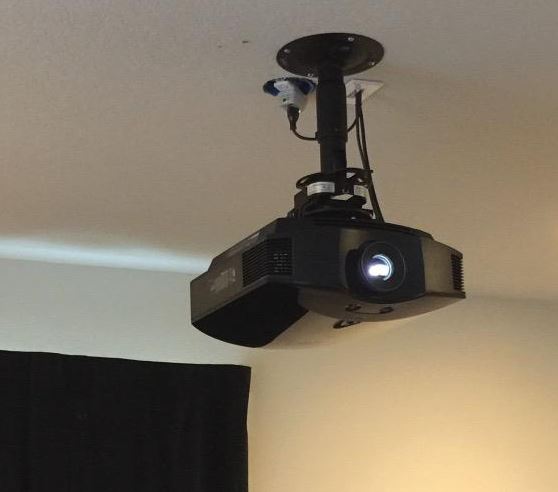 One of the biggest advantages to SXRD technology is the sharpness of the image. DLP tends to have a mild ‘color banding’ effect where the pixels are not perfectly aligned. When you look closely, it appears as if there is a red or blue line on either side of each pixel. With SXRD, this is a thing of the past. The pixels are razor sharp, providing the same clarity of image you’d get with an LED TV. Combined with the massive size of the image, you’re able to see a large number of fine details that wouldn’t otherwise be visible with a smaller screen. Since large displays tend to magnify problems, we were happy to see this projector perform so well. 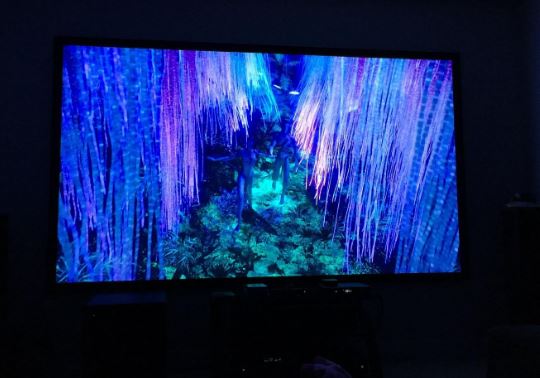 At 1800 lumens, this isn’t the brightest projector on the market. But this is one area where bigger isn’t always better. A 4000 lumen projector could be used in an office lit with fluorescent lighting, but when used in the dark the brightness is almost uncomfortable to look at. When the lights are dimmed, 1800 lumens is bright enough to cast a rich, vibrant picture without losing the ability to portray darkness. During a dark scene, the entire room goes dark, and you don’t suffer from looking at the washed out gray appearance of brighter projectors. But during a particularly bright scene in a movie, the room was illuminated enough that we would have been able to read a book by the light.

Despite all of the advanced options contained within this projector, connectivity was highly simplified. It streams video exclusively through one of the two HDMI ports. There is a USB port provided, which is designed to provide power to an HDMI streaming stick such as a Chromecast or Roku. There is also a serial port which can be used for a remote. These are commonly sold along with projector screens, allowing you to lower the motorized screen and turn on the projector with the touch of a button. 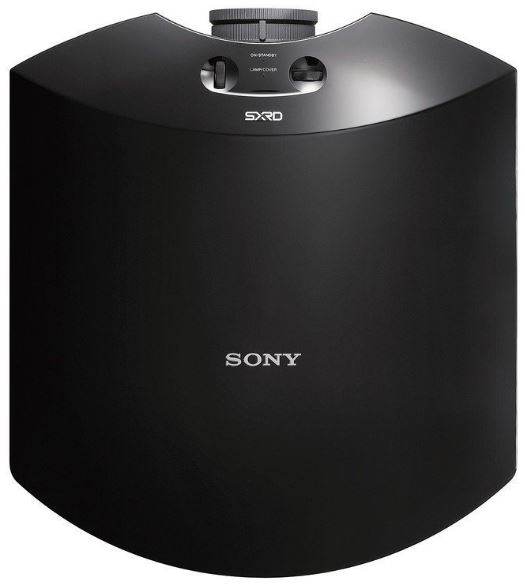 When you buy the HW45ES, you’re getting a top of the line projector that surpasses the competition in virtually every way. The one exception is resolution. While 1080p is the current standard, 4K content is becoming more and more common place. If you’re considering making a sizeable investment in a top of the line projector, it might be worth considering a 4K solution such as the Epson Home Cinema 5040Ube.

If we were going to design the ultimate home theater, the Sony VPLHW45ES would certainly be on our list. It’s one of the best 1080p projectors we’ve ever tested, and one of the few that provides an experience beyond what can be achieved with your typical television. Most brands rely on screen size to sell their projectors, but when you buy this model your large screen comes along with excellent color representation, a crystal-clear image, and a large amount of flexibility. 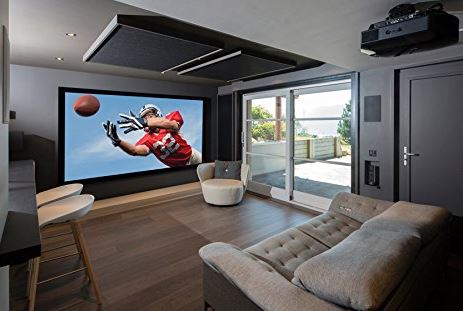 That being said, this isn’t a home theater in a box. To truly appreciate everything this projector has to offer, it needs to be used in the right environment. At a minimum, you’ll want a high-quality projector screen that allows the coloring to be presented in a neutral setting. If you’re shining it on a wall, the paint will skew the image to a point where it’s no longer worthwhile to purchase such an accurate projector.

Although not essential, a high-quality surround sound system is a major component of a high-end home theater. We tested this projector along with our Bose Lifestyle 650 home entertainment system, and found that properly calibrated audio really helped to pull us into the movie.

Although we were very impressed with this particular projector, it’s certainly not the only option. We’ve reviewed several 1080p projectors in the past. If the HW45ES doesn’t fit your budget requirements, there are a number of other options that can still provide an enjoyable experience for an affordable price.