If you’re a fan of retro gaming, Sega games are an essential part of your library. Now known as a publisher, Sega used to be one of the two main console manufacturers, along with Nintendo. Their earlier-generation consoles, the Sega Master System and Sega Genesis, were major successes. On these systems, you’ll find the first Sonic the Hedgehog games and the Phantasy Star series. The Sega Genesis also brought us the first Mortal Kombat games, which remain a popular franchise even on newer consoles.

Later Sega consoles, such as the Sega CD, the Sega Saturn, and the 32X Genesis adapter were less successful. But what all of these systems have in common is the fact that they use the same video port. As a result, if you buy a converter for one, you’ve got a converter for all of them. A simple 9-pin converter with an 8-pin adapter will get the job done. Unfortunately, with Sega’s last system, the Dreamcast, they changed up the video output.

First launched in the US in September of 1999, the Sega Dreamcast sold 1.5 million units by year’s end. But then, sales stagnated. Sony’s announcement of the PlayStation 2 put a damper on sales in the new year. The PlayStation 2 was a more powerful console with more processing power. It also used a DVD drive, which allowed for larger games than the Dreamcast’s GD ROM technology. Moreover, Sega had significant problems with game production. Millions of defective GD ROM discs were sold, which ultimately had to be returned and replaced. 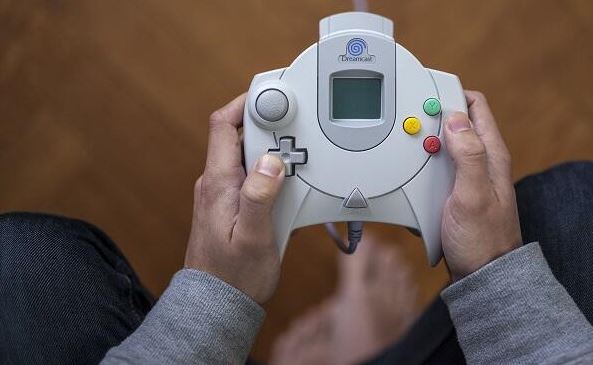 This led to a death spiral for the console. Sega reduced prices several times in order to drive sales, so they were actually losing money with each unit sold. In theory, they could have recouped these losses by selling more games. But a lack of consumer confidence meant that they still weren’t selling many consoles. And with a small customer base, developers were leery of developing games for the Dreamcast. In March, 2001, Sega officially discontinued the console, and got out of the hardware market altogether.

This is really a shame, because the Dreamcast offered some of the best games available. For example, Sonic Adventure was one of the best-reviewed Sonic games of all time. And Shenmue and Shenmue II were so successful that Sega continued the franchise. Ironically, they published Shenmue III as a PlayStation 2 exclusive, after the Dreamcast’s demise. In addition, the Dreamcast featured several ports of popular arcade games, such as Crazy Taxi. These are games you can’t play on any other console.

Sadly, because of its short lifespan and low sales, it can be hard to come by original Dreamcast hardware. Moreover, the original VGA output isn’t compatible with modern TVs. If you still have the original VGA cable, you can always use an RCA to HDMI converter. But if your cable is damaged, you’ll need a specialized converter. Remember how Sega changed their output plug layout? Because of that, you won’t be able to use your Sega Genesis converter. You’ll need a dedicated Dreamcast to HDMI converter. 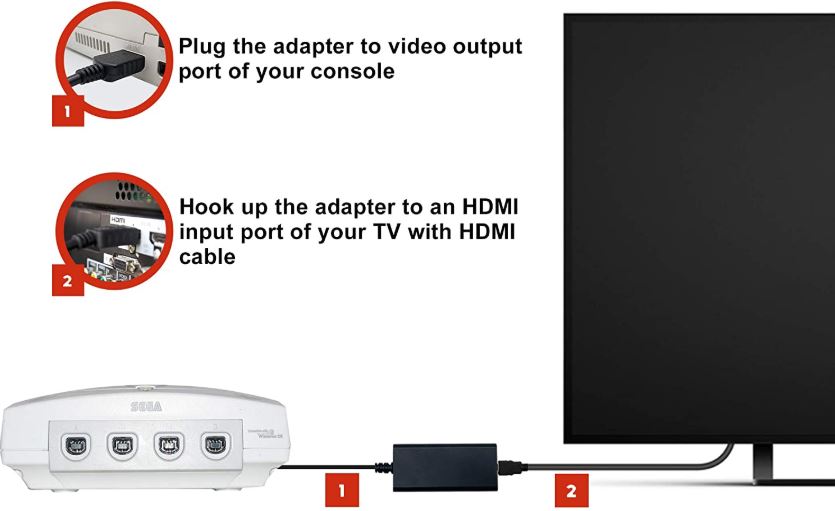 Here’s the thing about the Dreamcast’s graphics. It uses two video output formats. The first, the RGB output, was designed to connect to modern TVs. It output video in 240p or 480i, which were standard for CRT TVs of the time. The second output was a VGA output. This was designed to output video in 480p for contemporary PC monitors. It was part of Sega’s strategy for integrating the Dreamcast with the PC and allowing crossover play. 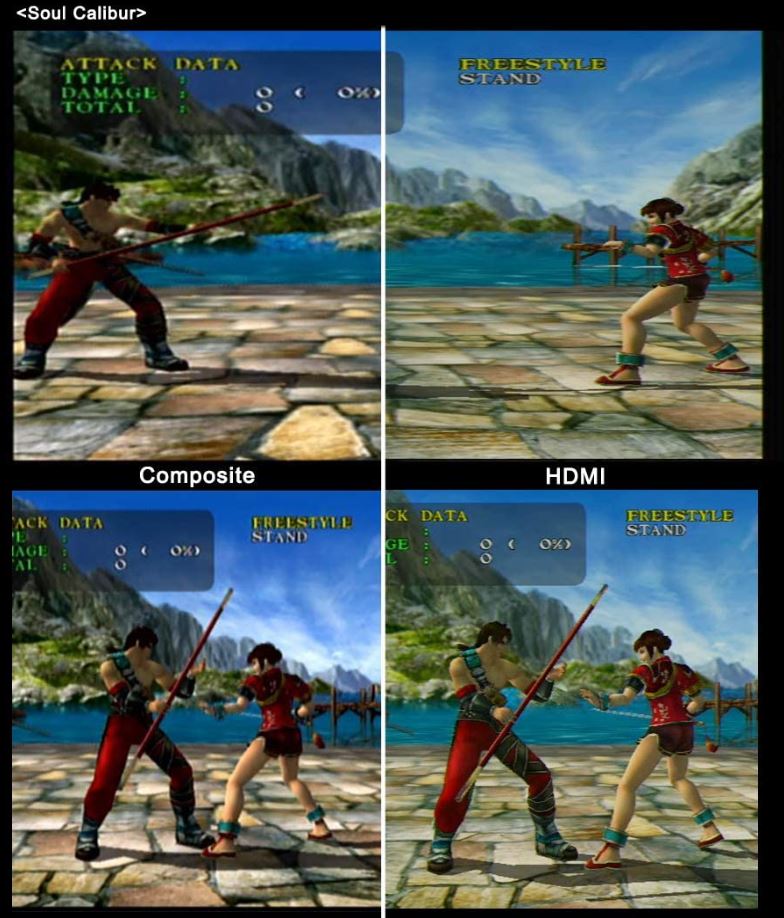 Sadly, crossover play never became a reality. But about 90 percent of the Dreamcast’s game library supports 480p graphics. That said, about 10 percent will only work with an RCA output. All of the adapters on our list are designed for a 480p video signal. This makes them compatible with modern TVs, and eliminates the need for a power supply for upscaling. That said, they won’t work for a small portion of Dreamcast games. Among these are Gunlord, Street Fighter 3: Third Strike, Mars Matrix, Fast Striker, World Impact, and Marvel vs. Capcom I. For most other games, including Shenmue, Crazy Taxi, and Sonic Adventure, you won’t have any issues. Now, let’s check out these converters! 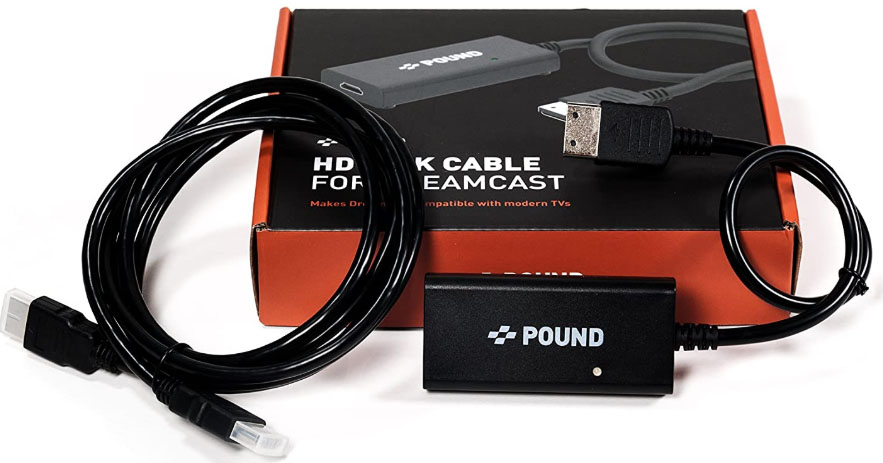 The POUND HD Link Cable for Sega Dreamcast is a simple, two-piece unit. The video connector features a 9-inch connection cable, with a small black fob that does the converting. The fob is compact and lightweight, with a matte black ABS plastic shell. It has a bold white POUND logo on the front, with an HDMI port on the other end. The kit includes a 3-foot HDMI cable for quick and easy setup. This should be good enough for most configurations. However, if you need a longer cable, the breakaway design allows for it. You can also replace the stock cable with a higher-quality, premium HDMI cable.

The POUND HD Link Cable for Sega Dreamcast displays video in full 480p. Provided your HD display is compatible with 480p, you’ll be good to go. In addition, the converter removes much of the “fog” found in original Dreamcast signals. You’ll notice that textures are a bit crisper and sharper than they were previously. This isn’t due to upscaling, since there’s no upscaling taking place. It’s simply due to the superior transmission quality you get with an HDMI cable versus standard VGA.

That said, the color accuracy isn’t as good as we would have liked. The colors are noticeably darker, so you might need to compensate by upping the brightness on your TV. Increasing the contrast can also be very helpful in this regard. A bulkier VGA to HDMI converter would get the job done with more accuracy. However, that would assume you still have a working Dreamcast video cable to begin with. If you don’t, a Dreamcast to HDMI converter is your only realistic option.

Due to the nature of the display, some games might not appear centered in your TV. Fortunately, this is very easy to fix. Simply turn off your TV, then turn it back on, and your problem should be solved. Alternatively, simply turn on your Dreamcast before you turn on your TV. This will ensure that your game appears smack in the center of your display. 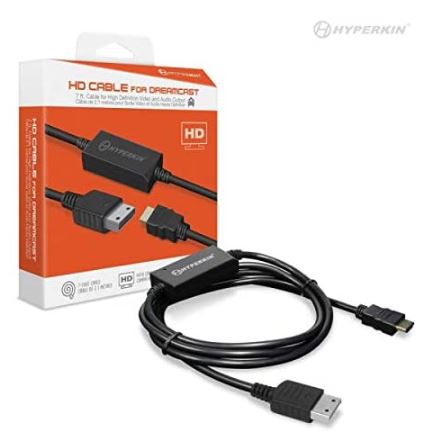 The Hyperkin HD Cable for Dreamcast is a bit different than the POUND cable. Instead of a breakaway design, it’s an all-in-one unit. This makes it easier to manage, since you’ll only have one component to work with. Moreover, the cable is 7 feet in total length. This means you can use it in more configurations, without the need to worry about an extension. The converter box itself is a plain black, and is located roughly in the center of the cable.

The Dreamcast cable tip on this unit is a bit finicky. If you jam it all the way in, you’ll end up with a blue-tinted screen. Instead, simply insert the cable tip gently, until it’s securely seated but not at its limit. That way, you’ll be sure to get the proper colors. 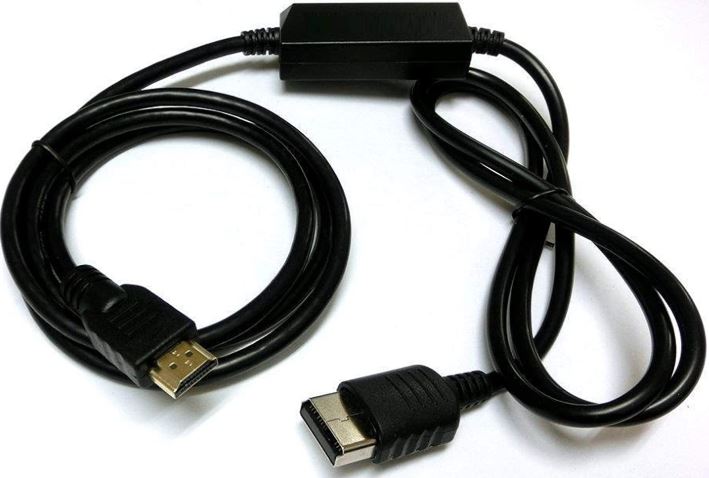 As with all of our converter options, the Hyperkin HD Cable for Dreamcast outputs in 480p. As a result, your HD television will need to support this format. Most modern televisions do, but it’s best to be sure before you click that “buy” button.

The signal itself is clean and clear, but there’s no significant improvement over a standard VGA signal. The textures are not noticeably improved, nor are the edges smoother. We’re not saying the Hyperkin converter is bad. We’re just saying it doesn’t improve the texture quality. Essentially, you’re getting a simple converter that works as advertised. That said, if you want a major boost to image quality, you might want to look for some better options.

One area where the Hyperkin converter stands out is color quality. Colors are noticeably brighter, to the point where you might actually want to reduce your TV’s saturation level. But if you like your games to look as bright and fun as possible, you’re looking at a top-notch converter. 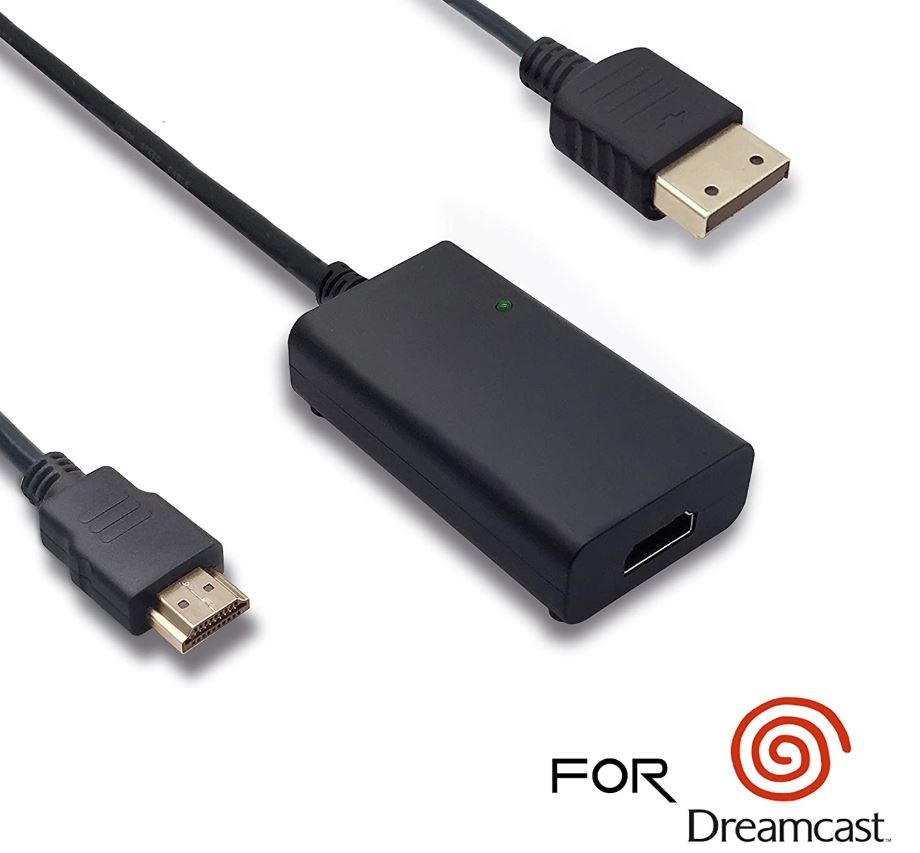 The LevelHike HDMI Cable for Sega Dreamcast has a similar design to the POUND cable we already looked at. It has a breakaway design, with a Dreamcast video connector that has a small fob on the end. The fob is compact and matte black, with an LED light that indicates when it’s plugged in. It also has little rubber feet on the bottom, so it’s easy to position on a shelf next to your Dreamcast.

The video connector sports a 1-foot cable, while the HDMI cable measures six feet in length. This is plenty long for most setups, but you can always replace it with a longer one. Moreover, you can replace it with a premium HDMI cable for an even better picture. The converter comes with a one-year manufacturer’s warranty against any defects. 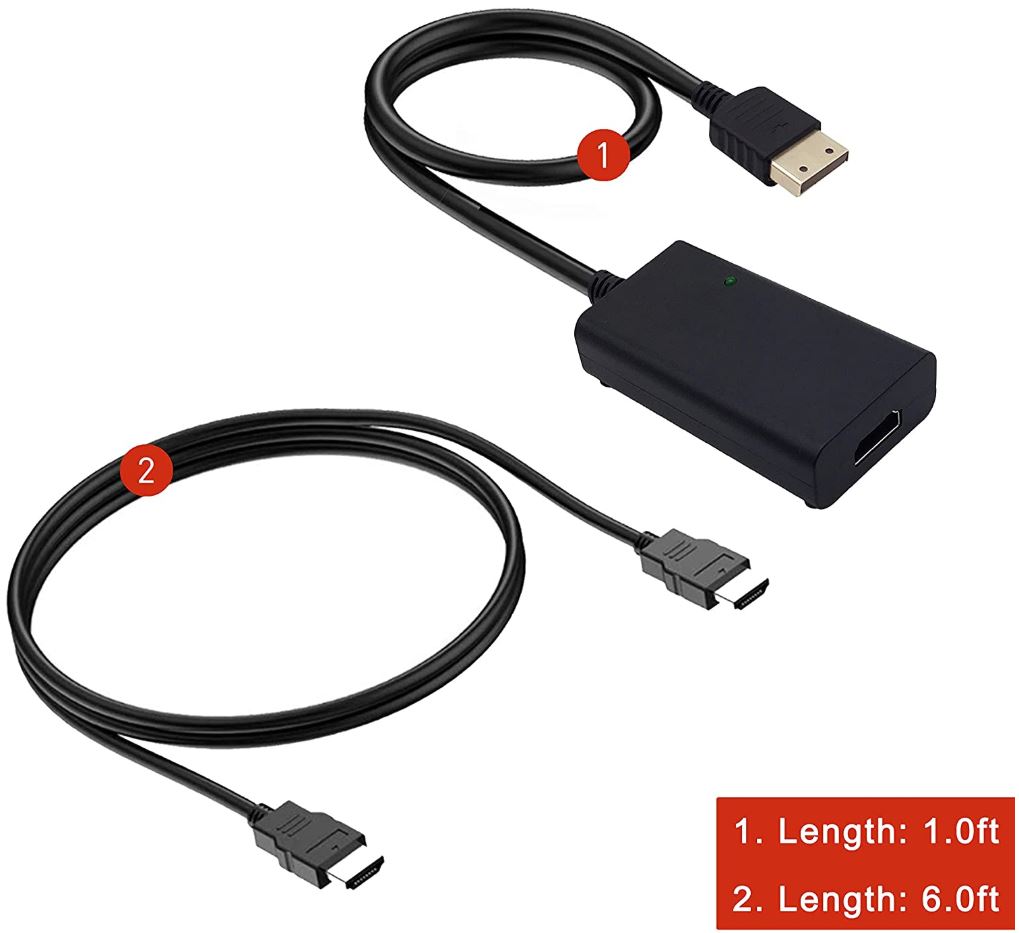 The LevelHike HDMI Cable for Sega Dreamcast produces very high quality images. You’ll get color reproduction that’s true to the original, neither too dark nor too bright. You’ll also get improved textures. The images will be nice and soft, with fewer jagged edges and less pixelation. In addition, the images are softer, eliminating the haze you’ll often see on the original Dreamcast output.

In terms of image quality, this is the best Dreamcast to HDMI converter of the bunch. However, it does come with a couple of issues. First off, the default aspect ratio is 16:9, which can cause distortion. To fix this, you can simply change the ratio to 4:3 on your TV, assuming your TV supports that option. Another potential issue is similar to the issue on the Hyperkin cable. Under some circumstances, the image may be shifted to one side. Thankfully, you have the same solution. Just turn on your Dreamcast console before you turn on your TV. This will fix the problem. Alternatively, you can simply turn the TV off, then back on, or unplug the cable and plug it back in.

As you can see, each of these cables comes with its own unique benefits and drawbacks. But which one is the best? To begin with, the POUND HD Link Cable for Sega Dreamcast offers excellent performance at a reasonable price. It significantly improves textures, as well as removing fog. That said, the color is a bit dark. The cable is also on the short side, but you can always replace it with your own if that’s an issue.

Next, we looked at the Hyperkin HD Cable for Dreamcast. The all-in-one design is very convenient to use, and the cable is long enough for almost any setup. On the other hand, the textures aren’t improved over the base Dreamcast cable. But the colors are nice and bright, and the cable is easy to use.

Last, we reviewed the LevelHike HDMI Cable for Sega Dreamcast. This converter offers superior texture and color. It also sports a long cable, which can be replaced with an even longer one if you need it. It can be a little twitchy at times, so setup can take a bit of effort. But if you’re willing to put in the time, it’s the best converter cable on the market.

Guide to the Best Ethernet Adapter for Nintendo …
January 3, 2021