TechGuru May 5, 2018 Audio, Speakers No Comments

If small speakers could do everything we wanted, then large speakers wouldn’t exist. But the fact of the matter is, a smaller design has a huge impact on the kind of sound you’re able to produce from a speaker. All else being equal, larger speakers are going to end up using larger drivers, which will be capable of producing a deeper soundscape than you can otherwise achieve. Bigger bodies enable better bass, and for Bluetooth speakers, they make it easier to store large batteries.

Everyone selecting a Bluetooth speaker will care about portability to some extent. But unless you plan on physically carrying the speaker during every moment of operation, you don’t want to choose a speaker that’s any smaller than it has to be. Whether you’re listening to an album alone in a hotel room, or you’re jamming out with your friends on a windy day at the beach, bigger speakers tend to deliver the better sound experience. 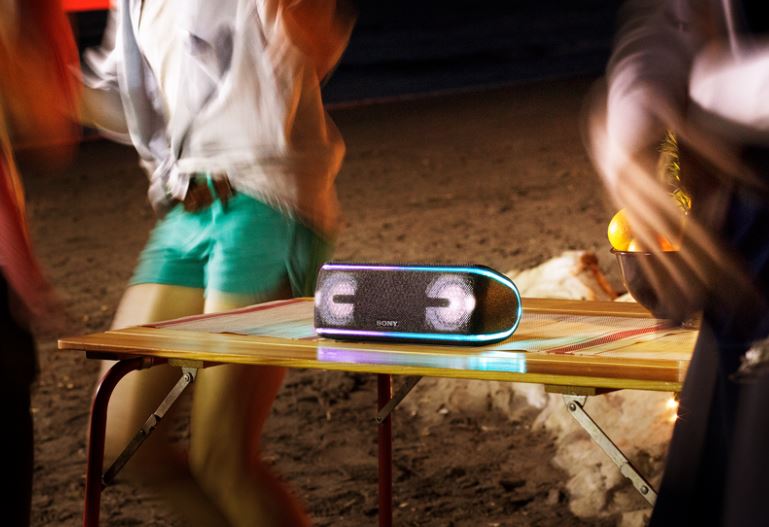 The SRS-XB41 is the largest Bluetooth speaker in Sony’s new SRS series. It’s giant 5 x 13 x 7-inch body visually dwarfs its cousins, the XB31 and XB21. Although the entire SRS line of Bluetooth speakers share many premium features, it’s easy to say the XB41 has the best sound quality of the bunch. A large part of the reason why involves the physical size of the device being closer to a full-bodied speaker.

But that larger size also allows features that exist on the XB21 and XB31 to sound better on the XB41. Most notable among them is Live Sound feature, which involves the directional use of sound to emulate a surround sound experience. The larger size of the XB41 allows Live Sound to reach new heights, creating a unique listening experience that sounds almost completely distinct from the same feature on the smaller models.

Although the SRS-B41 is big by design, it can still fit comfortably in one hand. One of the few differences between the XB41 and the other models is the XB41 is so large that Sony needed to add a small grip handle within the build. The XB41 is still modestly sized enough that people with larger hands won’t have to resort to using the grip. For everyone else, it’s easy to appreciate how the grip was seamlessly worked into the bezel, and doesn’t affect the aesthetic or accessibility of the build.

Internally, the XB41 uses a 2.2” dual speaker design. Each of those speakers use large 58mm drivers, roughly one third larger than what you see in most full-sized headphones. Those larger drivers are ideal for helping keep sound clarity high as you increase the volume, and keeping tones clear as you get further away from the speaker.

Along the top of the device you’ll find all of the most commonly used buttons, like volume control and Bluetooth connectivity. On the XB41’s backside you’ll find an accessory hatch that can be released to find another slew of buttons and ports. The one worthiest of note is the USB charging port, which can help siphon life out of the speaker to help recharge your smartphone battery. Other ports include USB-A, micro USB, DC-in, and stereo-in. 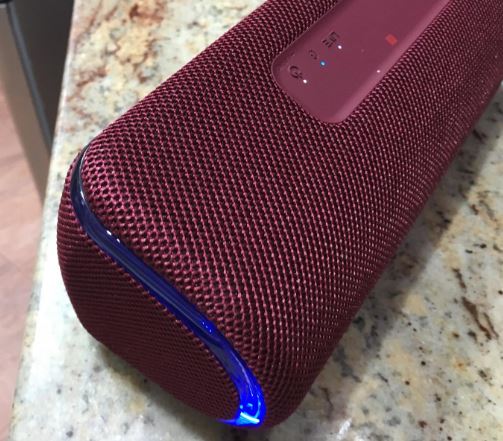 There is at least one downside to being large, and that’s weight. The XB41 weighs a hefty 3.3lbs. For carrying from one place to another and setting it down, that much weight should be an issue. But if you’re looking for something you can hold in your hands for an extended period of time, then you’ll find it can be uncomfortable to haul around that much added weight. And it’s certainly not something you want hanging from your wrist.

If you do find yourself carrying the XB41 around, you’ll appreciate it’s rated to be shockproof for roughly 3-feet. In other words, it’ll handle taking a dive off a tailgate into a concrete parking-lot. It’ll be okay if it falls off your desk, or even if you drop it while you’re carrying it. But it’s not invulnerable, and you wouldn’t want to go testing how well the shock-proofing holds up without provocation.

Buying audio equipment is an investment. Sound technologies age much slower than the devices they’re attached to. With care, it’s often possible to keep using the same sound equipment for over a decade. And the SRS-XB41 is built to reflect those kind of possibilities. It’s composed of a mica-reinforced cellular material that’s much sturdier than you’d expect from something so lightweight. Internally, the speaker cones are just as sturdy, ready to hold up under the physical strain of being taken on the road.

And the SRS-XB41 is rugged down the line. The most substantial component of that ruggedness is its IP67 waterproof rating. That rating indicates the XB41 will have no problem with dust, mud, dirt, and even rain. You could safely run this speaker under a gentle hose or sink faucet with no cause for alarm. Of course, you’d want to make sure you’d tightly sealed all the ports before doing so, and you wouldn’t want to submerge it in more than one meter of water. But any speaker that would survive a dip in a kiddie-pool is sturdy enough for the challenges of daily life. 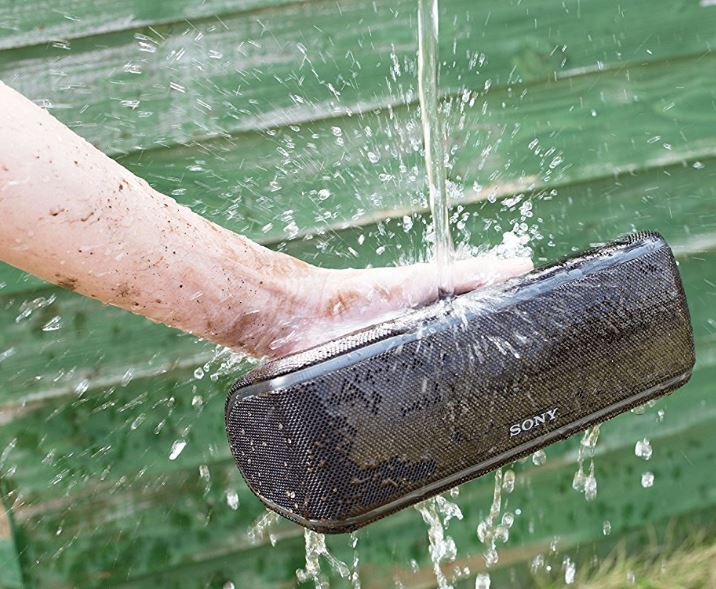 Ultimately, the thing that will age the XB41 speaker to obsolescence will be its battery. Lithium ion batteries gradually lose maximum capacity with time, a process that’s only sped up with persistent use. The good news is that the battery life of the SRS-XB41 is so impressive to begin with, that even after it’s been worn-in, you’ll still be able to get plenty of playtime out of the device. Except for the most extreme circumstances, it would be surprising to see the SRS-XB41 get less than 5 years of steady use.

But what really makes the SRS series exceptionally long-lasting is their ability to make a wireless party chain, connecting as many as 100 speakers through Bluetooth. That means the emulated surround sound provided by the XB41 can be taken one step closer towards authentic surround sound, and your portable sound system can easily be expanded.

The XB41’s battery life is somewhat of a contentious issue. The problem with larger speakers is that they draw more power, especially if you intend to use them at greater levels of volume. While Sony’s advertising claims you can drag out the XB41’s life to 24 hours, a careful look at the full specifications will reveal a different picture. With maximum volume, the XB41’s continuous playback is much closer to 4 hours.

The good news is that for more average levels of volume, you’ll easily get eight hours of battery life. And for a party-oriented device like the XB41, lasting most of the day should be enough. But no one should head into the XB41 with expectations of achieving 24 hours, that’s only setting yourself up for an unrealistic disappointment. 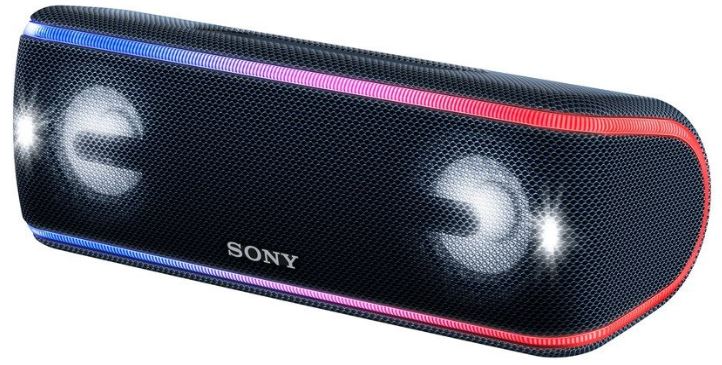 Aesthetically, the XB41 is almost identical to the smaller units in the series. It has the same speaker light LED system, and the same flashing strobe-mode features, which are built to help provide a party atmosphere. Apart from the addition of a handle, the only significant aesthetic difference between the XB41 and its companions is the availability of colors for each model. The XB41 isn’t available in white, while the XB31 and XB21 are.

Ordinary portable speakers operate by sending their sound directly forward. That’s great for watching television, but it doesn’t sound natural or immersive, and sounds outright poor unless you’re directly in the direct trajectory of the sound. But the XB41’s Live Sound mode helps send out sound with angled drivers, helping to encompass a wider area with the sound, and to provide a more natural spacious listening experience.

Like all the SRS-line Bluetooth speakers, the XB41 has fairly strongly boosted bass. While bass tends to be notoriously bad on portable speakers, for the very reason that they’re portable, the XB41 is somewhat of an exception. Its larger size combined with Sony’s unique approach to bass boosting provides a fairly strong and impressive bass experience. 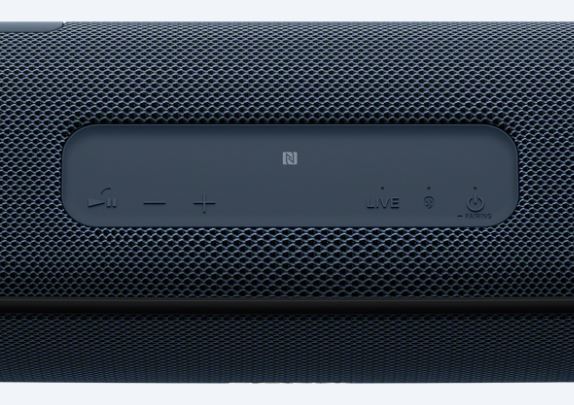 The XB41 promises some things that it can’t deliver. Unless you’re playing your music at incredibly low volumes, you’re not going to end up with 24 hours of battery life. The addition of a USB charging port is a nice convenience because it turns your speaker into a portable battery for your phone. But the modestly-sized battery within the XB41 is going to take a serious beating anytime you choose to do so.

For the price of the XB41, you can just about purchase an XB21 and XB31 instead. It would be almost exactly as portable as dealing with the larger XB41, and being able to use both units in a party chain would provide a truer surround sound experience. But at the end of the day, neither the XB21 nor the XB31 offer the same level of sound quality. The XB41’s larger bodied design is its greatest strength and greatest weakness at the same time. 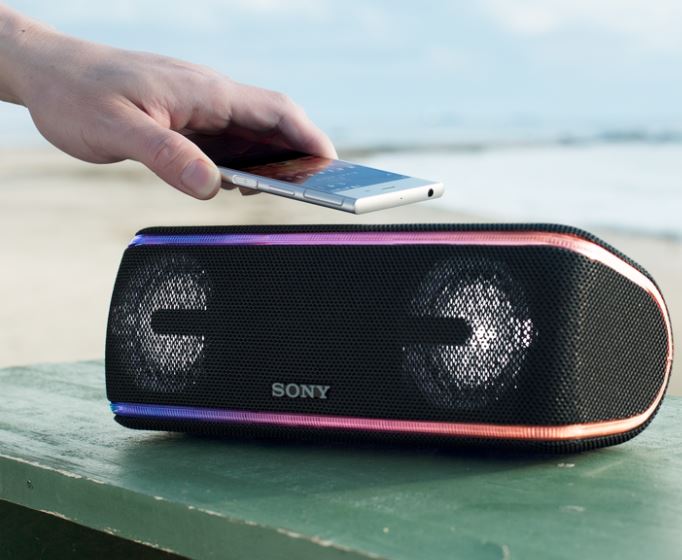 Who Should Choose the SRS-XB41?

Bluetooth speakers are a compromise. Because they’ve got to be at least relatively small and portable, sound quality tends to suffer. If you made a Bluetooth speaker that was every bit as powerful as a wired 2.1 channel system, your wireless speaker would weigh 50 lbs. and take two days to charge. By contrast, the XB41 is about as large as you can make a Bluetooth speaker while still calling it portable.

If you have a specific reason you need your Bluetooth speaker to weigh only 1 lb. and fit in your front pocket, then the Sony SRS-XB41 isn’t going to work for you. You’d be better off looking into the ultra-tiny SRS-XB21, or the modestly sized SRS-XB31. But unless you’ve got a specific reason to go small, you want to go as large as you can.

And the XB41 is exactly that. It’s small enough to be taken with you on trips, and lightweight enough to carry around with one hand. It’s also powerful enough to put to shame any comparable speakers within this price range. For anyone who wants to have premium quality sound with them anywhere they go, the XB41 is a great pick.

Review and Testing of the iWalk CrazyDuo True …
November 8, 2019