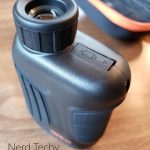 Whether you’re golfing or hunting, it’s often necessary to know the exact distance to your target. For example, suppose you’re taking a fairway shot at the green. Knowing the exact range could tell you whether you need to use a seven iron or a nine iron. The same type of precision is even more important for long-range shooting. As a bullet travels through the air, gravity kicks in and it drops. As a result, you have to shoot higher than the target the further away it is. For serious sportsmen, it’s imperative to know your exact range to the target. For hunters, it’s not just a matter of bragging rights; it’s a matter of ethics. If you’re not 100 percent sure you have an ethical shot, you’re not going to take it.

So for everyone from weekend golfers to serious hunters, a good rangefinder is a necessity. A laser rangefinder uses tried and true principles to determine the distance between you and your target. It shoots a beam out, and the beam returns. Based on the time it takes for the laser beam to return to the rangefinder, it knows the distance. This is the same principle used by radar systems, only using a laser instead of radio waves. Tacklife is known for quality laser technology, including some of the world’s best laser measures. So it came as no surprise to us that they’re well-known for good rangefinders, too.

We’re about to review the Tacklife MLR01 900-Yard Laser Rangefinder. We’ll start by looking at its physical design: how it’s constructed, and the quality of the materials. We’ll move on to how it’s used, and how accurate the readings are. In the end, we’ll wrap up by talking about the battery performance, and any odds and ends we’ve missed along the way. With all of that taken into account, we’ll be able to render our verdict. 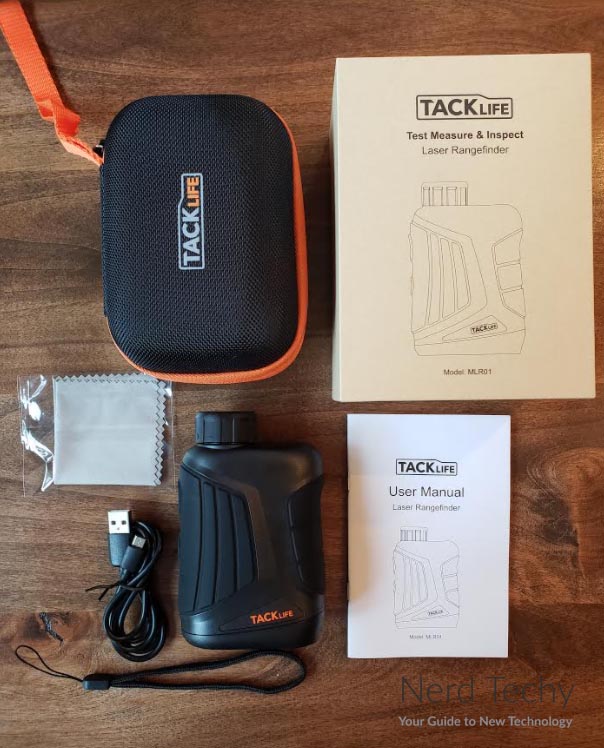 The Tacklife MLR01 900-Yard Laser Rangefinder is shaped like a camcorder. In fact, it could be confused for one, with a rubber viewfinder on one side and a lens on the front. However, a closer look would reveal some significant differences between the MLR01 and a camcorder. First and foremost, there’s a second lens under the main lens. This is actually not a lens you can look through at all. It’s the laser sensor, which explains why it requires a separate lens. You wouldn’t want the laser shooting back into your eye! As a matter of fact, that brings us to an important safety pointer for any laser rangefinder. This is a Class 1 laser, and can cause permanent damage to your retinas. If you value your eyesight, never stare directly into the laser. 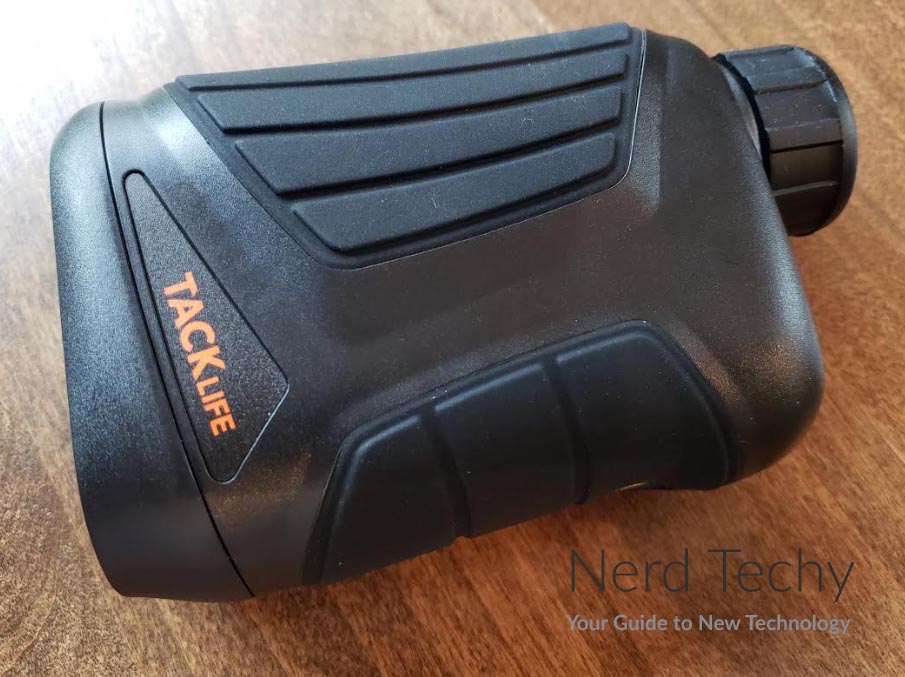 That said, you’ll definitely want to take a look into the viewfinder. Inside, you’ll see an LCD readout that shows you a variety of information, including the distance to target. This makes it very easy to read, since you don’t have to step back to check your measurements on a display. You can aim the MLR01 at the same time as you’re taking your measurements, which makes the process simple. Operation is simple, with a set of buttons on the top. These include a forward power button, and a rubbery rocker button for changing modes. All are easy to press with your fingers while holding the viewfinder to your eye. 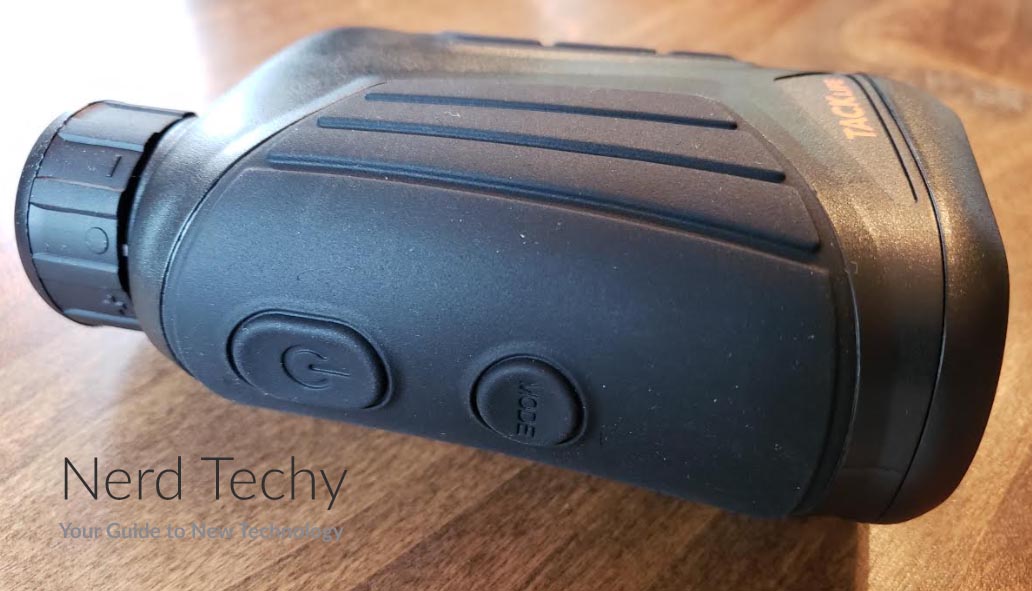 On the bottom of the charcoal grey housing, you’ll find a row of LED lights. These indicate the current status of the rangefinder’s battery. The battery charges via Micro USB, and the cord plugs into the back of the unit. You can also connect to your PC or Mac via USB, to download measurements or update the firmware. On the bottom of the housing, behind the lights, there’s a ¼-inch threaded hole for attaching to a tripod mount. This can be useful if you’re using the MLR01 for landscaping, or for other all-day purposes. It can also be used to ensure that you’re taking multiple measurements from an identical height.

The rangefinder is easy to carry, with a lanyard that wraps around your wrist for safety. It comes with a rugged nylon case, with a hardened outer shell and a weave around the sides. The bulk of the case is black, but it has an orange stripe around it for easy visibility in a toolbox or dark workshop. The rangefinder and the case are both covered by Tacklife’s 24-month manufacturer’s warranty. If you run into any issues, you can contact them for a full refund or free replacement. 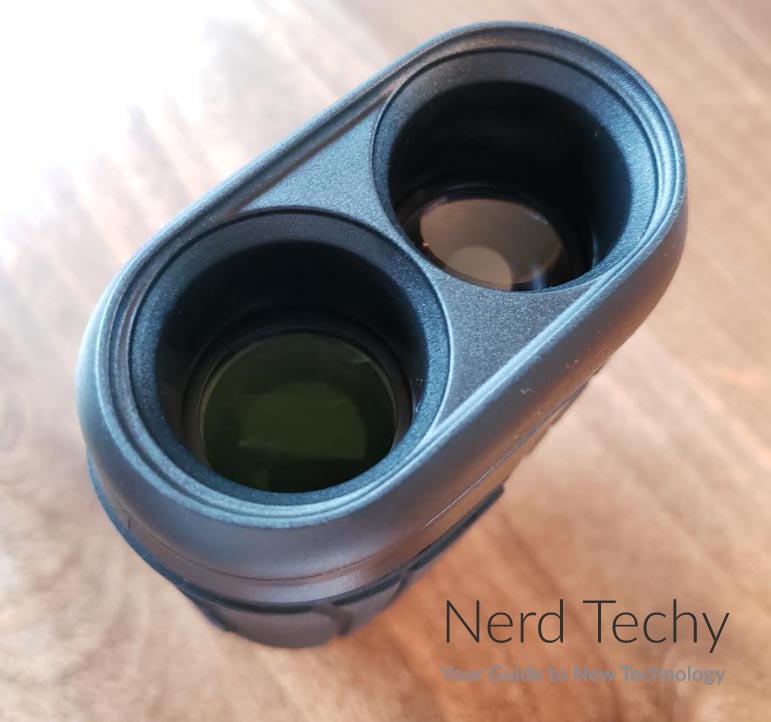 The MLR01 is relatively easy to operate, with buttons to switch between different modes. Stare down the viewfinder, and you’ll see whatever information you’re supposed to. The primary, default method is for straight line distance. This is fairly straightforward. You point the rangefinder directly at your target, and it tells you the distance. If you’re pointed on an angle, the distance will be measured along that angle. In other words, the measurement is the exact length of the beam from point A to point B.

The most useful mode for golfing and firearms is horizontal distance mode. In this mode, the MLR01 will automatically calculate only the horizontal distance. For example, suppose you’re looking at a golf green that’s 100 yards ahead and 5 yards downhill. The display would ignore the vertical distance, and show only the horizontal distance. That said, it will also show the slope, or the “play as” distance. This is useful for inexperienced golfers or shooters. However, slope displays are banned in all rule-abiding golf tournaments. According to the rules, local associations may allow rangefinders, but the rangefinders can only display the distance to the pin. Since you can’t turn the MLR01’s slope option off, you’ll have to leave it behind for tournament play. 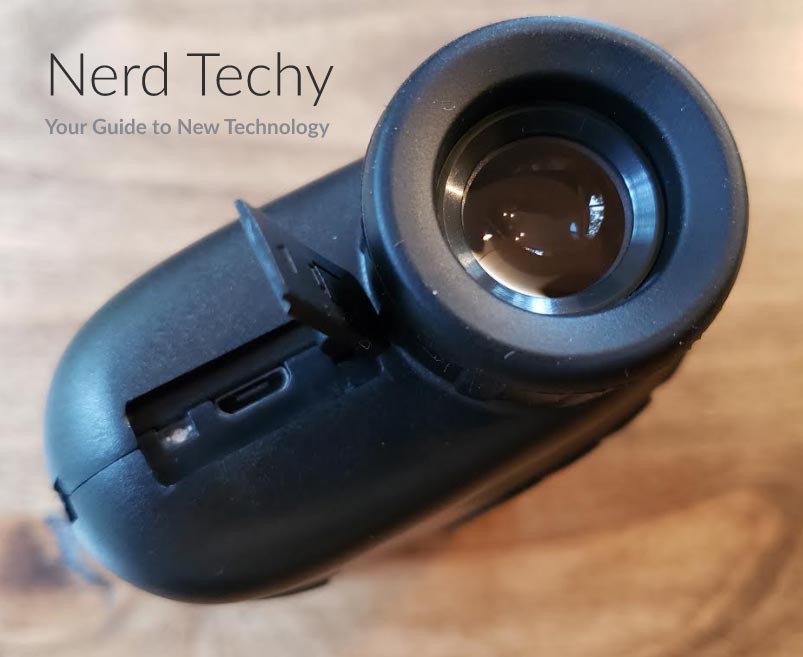 The maximum range of the rangefinder is approximately 900 yards. Exactly how far will depend on the ambient light. On a very sunny day, with the sun in front of you, distances could be as short as 500 yards. Similarly, you could easily reach over 1,000 yards on a dreary, cloudy day. But under normal conditions, with the sun present but not shining in the lens, 900 yards is about right. If you’re looking at very long distances, you won’t have to guess what you’re looking at. The viewfinder has a zoom function with up to 7x magnification, so you can easily tell what you’re looking at. It’s also multi-coated, to protect from both scratches and glare. And with an accuracy of +/- one yard, you’ll know you’re getting the right measurement.

For any realistic shooting purposes, 900 yards is plenty. And it goes without saying that a half-mile range is more than you’ll ever need for golf. But what if you need a rangefinder for landscaping or architecture? In that case, the Nikon BLACK RANGEX will be a better choice. It has a maximum range of 4,000 yards, or more than two miles. However, it’s fairly expensive, an unnecessary extravagance for a golfer or hunter. 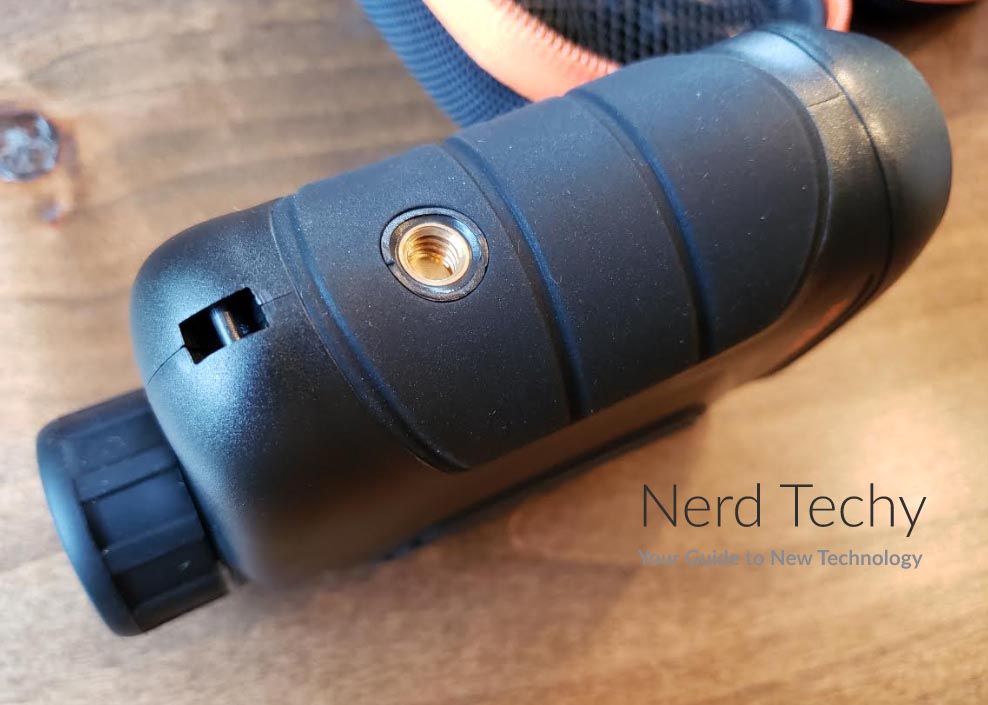 One thing we didn’t like about the MLR01 was the product manual. It’s difficult to understand, and doesn’t really explain much. So while you’re getting an excellent rangefinder, you’re not getting much help with using it. It’s not rocket science, but there’s still some trial and error involved.

The MLR01 has an internal 750mAh battery, which contains enough charge for 30,000 measurements. This is a manufacturer’s rating, so it’s tough to say for sure what it means. 30,000 measurements of what? Two seconds? Ten? It’s not as if a measurement is instantaneous. You have to hold down the button and acquire your target. Even so, let’s assume that Tacklife is being wildly optimistic, and you can “only” take 5,000 measurements. That’s still an insane number of measurements per charge. How many rounds of golf are you going to play before you even get close to that number? 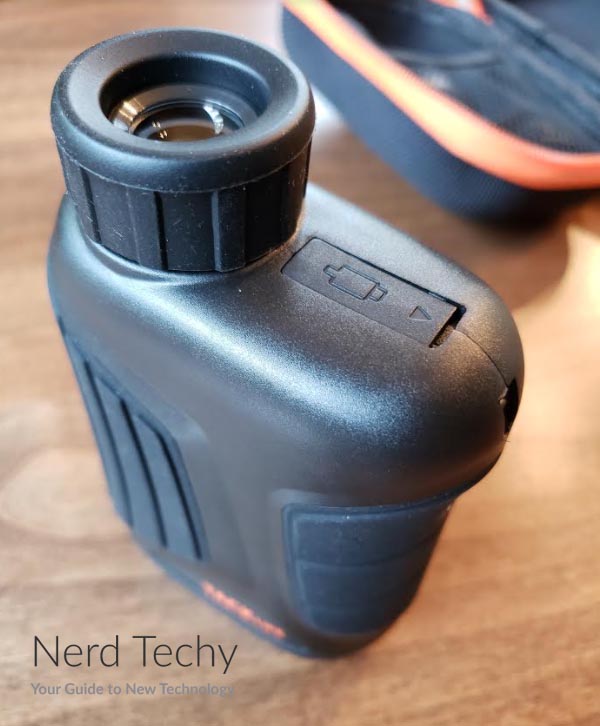 Moreover, the battery is easy to charge. The Micro USB cable can be connected to any USB charging source, so you can top off the battery whenever you like. Not only that, but there’s an automatic power-off feature designed to extend the battery life. If no buttons are pressed for 20 seconds, the rangefinder will immediately turn off. This ensures you don’t set it down, forget about it, and drain all your juice.

There are a couple of extra features that are worth noting before we wrap up. First, you can use the MLR01 to measure speed. Speed measurements are accurate to +/- 5 kilometers per hour, so this isn’t exactly a prog-grade radar gun. Still, it gets you in the ballpark. You’ll be able to tell, for instance, whether a baseball pitch is in the 60 or 70 mile-per-hour range. 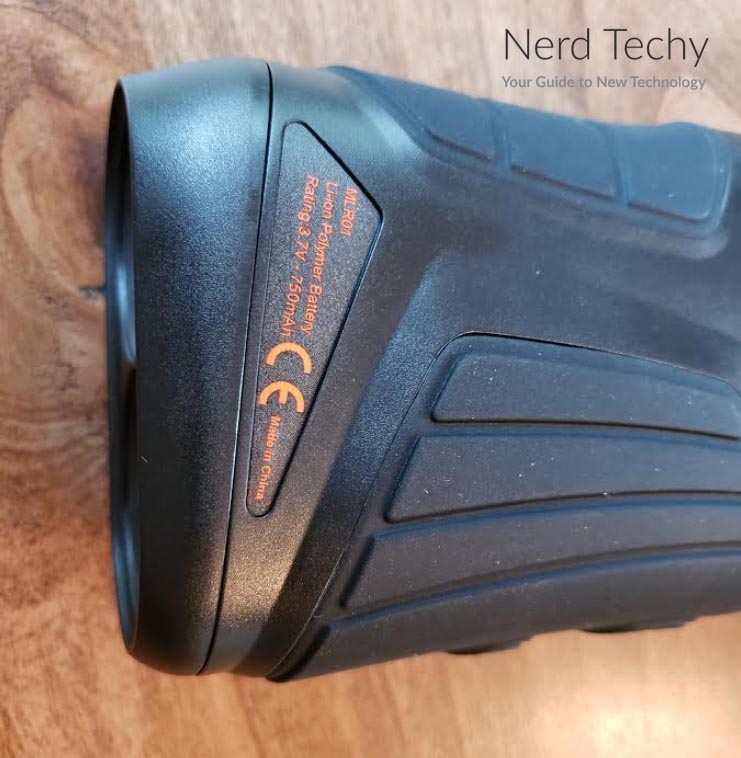 Speaking of miles, some people use them, while others use kilometers. Similarly, many may want ranges in meters instead of yards. For that reason, the rangefinder can easily be switched between English and Metric. Simply hold down the Mode button to alternate between one and the other.

Finally, there’s a special flagpole locking feature for golfers. This is exactly what it sounds like. The rangefinder locks onto a flagpole, making it easier to take measurements. This is automatic, but it makes a big difference when you’re quickly trying to determine the distance to the pin. 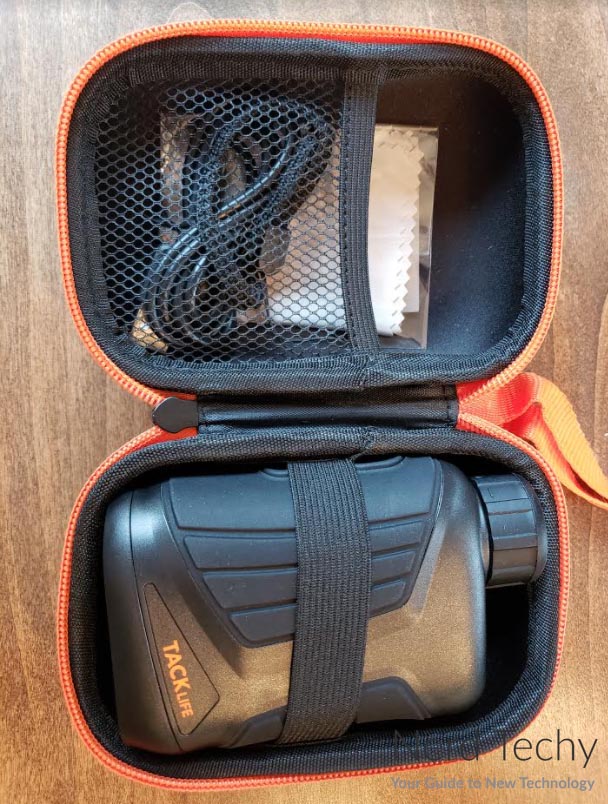 Is the Tacklife MLR01 900-Yard Rangefinder a good choice for you? For most people, the answer is going to be yes. For one thing, it’s highly accurate, and has a very long range. Yes, there are even longer-range devices out there, but for most people, 900 yards is plenty. More to the point, it does just about everything you need. Whether you want straight-line distance, horizontal distance, or even a speed measurement, you’re covered. The only people who should think twice are tournament golfers, since it’s not tournament legal.