These days, dash cams are becoming more and more popular. They’ve long been a necessity in some countries, like Russia, where insurance fraud is a common problem. But with the prices getting lower and lower, they’re starting to pop up like mushrooms even in countries where they’re not a necessity. Moreover, modern dash dams are able to integrate newer features like geotagging, live casting, and even collision alerts.

This September, Thinkware released the U1000. This is their first 4K dash cam, and we were excited to see what it has to offer. Let’s take a closer look! 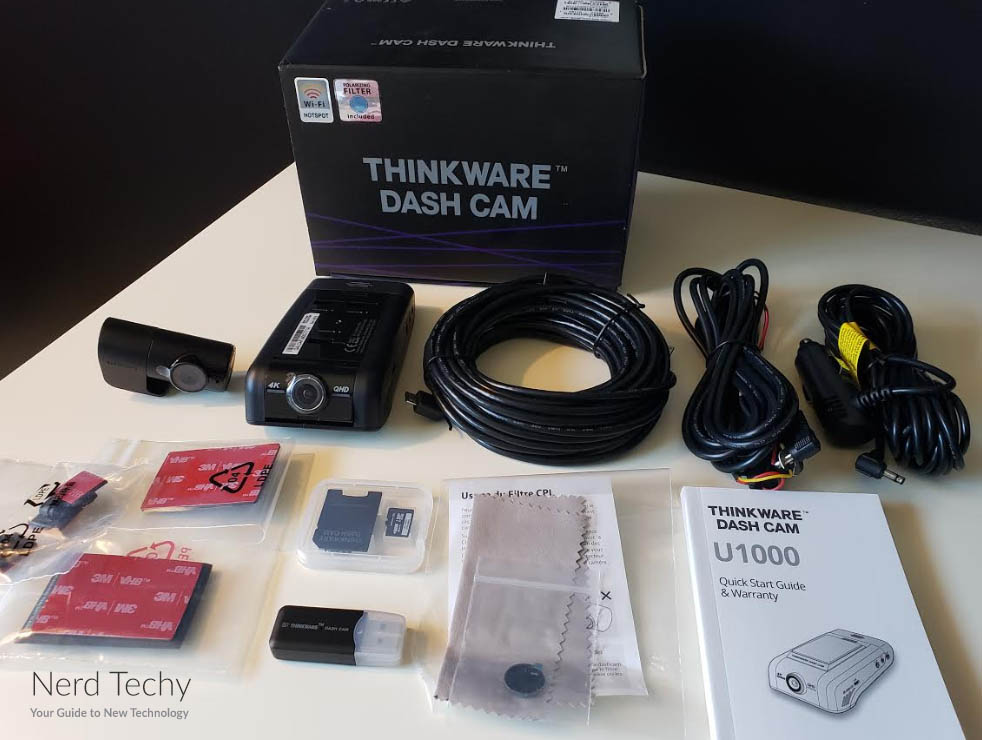 The first thing we noticed about the U1000 is that it’s very compact. At only 2.6 inches wide, 4.3 inches long, and an inch and a half thick, it’s small enough to mount behind the rear view mirror in some vehicles. And even if you have to mount it to one side, the profile is negligible, so it won’t obscure your vision like some bulkier models. If you buy the version with the optional rear view camera, it’s only about 2 inches wider, and the rear view camera can be swiveled independently to aim out the rear of the car. 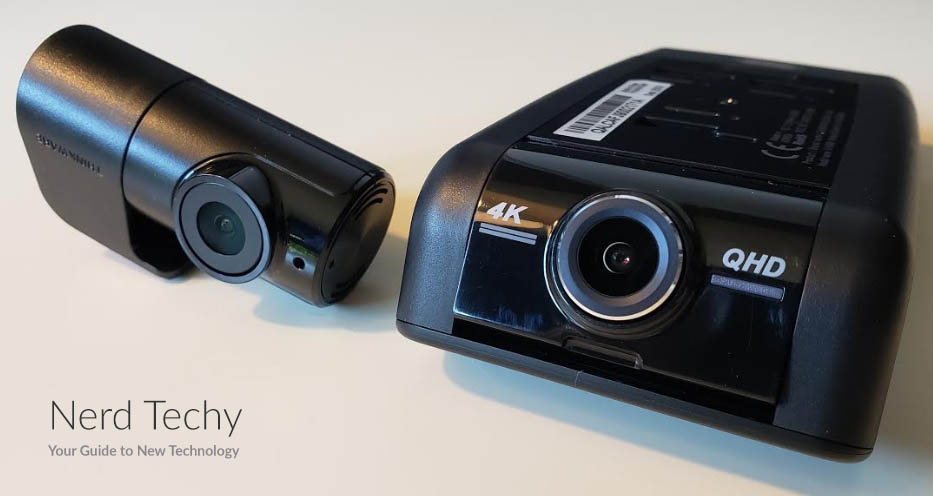 The base model includes a 12-volt charging cord. The cable is easy to route, since the kit includes a set of adhesive wire clips that will keep the cable from dangling across your field of view. In addition, the upgraded rear view camera variant also comes with a hard wiring kit, so you can hook it up directly to your car’s power system. There’s also an input port on the side of the camera for a Thinkware radar detector. The radar detector does not come with the kit, but it’s nice to see that Thinkware is keeping their devices compatible.

The U1000 mounts to your windshield on an adhesive bracket. From what we can tell, the adhesive is very secure, and won’t come undone by accident. It’s also heat resistant up to 150 degrees, which means it’s not going to melt when your car’s sitting out in the sun on a hot summer day. And it’s covered by a one-year warranty, so if anything should fail, you’ll be protected. 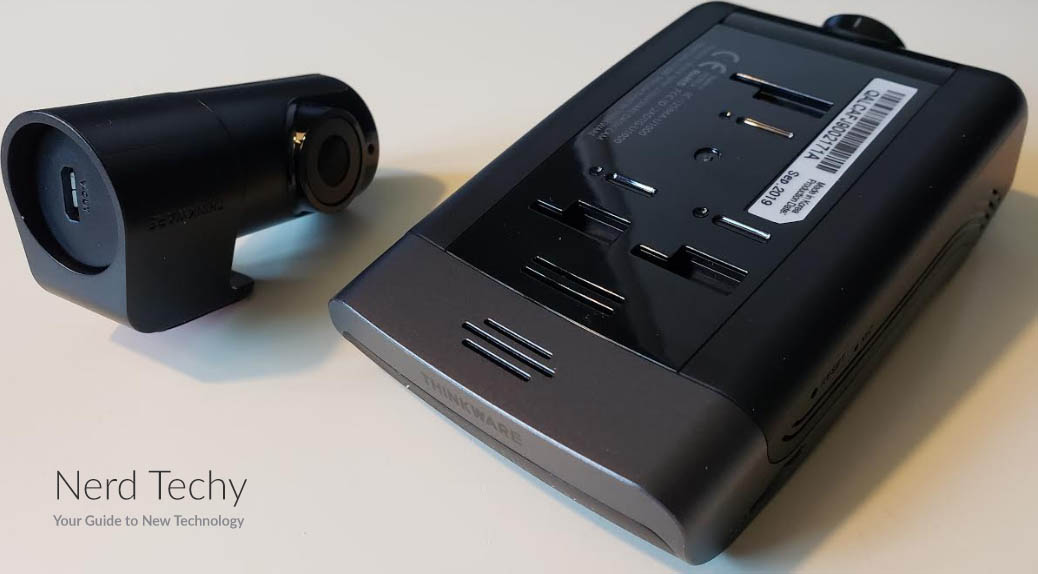 One thing the U1000 does not offer is a live monitor. This is advantageous, because it allows for the low profile we loved so much. But if you want a dash cam with a display, the Z-Edge Z3D is a great choice. At first, a display might not seem that helpful, and it isn’t during the daytime. But at night, the night vision can see a lot further than your unaided eyes, which makes it easy to spot deer or pedestrians on a dark night. In addition, this dash cam has a very low power draw. It runs on USB power, and includes a dual USB charger for your car’s cigarette lighter. This eliminates the need for a secondary charger for your phone or other electronic devices.

As we’ve already mentioned, the U1000 records in full 4K. This allows you to spot plenty of details, which can be helpful in the aftermath of an accident. It’s also a great feature for streamers, since it means you’ll have the best possible picture before any downscaling. At 4K, the recording will run at 30 frames per second. Alternatively, you can record in 2K at 60 FPS. This is a great feature if you’re at a racetrack, since you’ll be able to play back in slow motion while maintaining a reasonable frame rate. If you’ve purchased the variant with the rearview camera, be aware that the second camera records in 2K only, at 30 FPS. 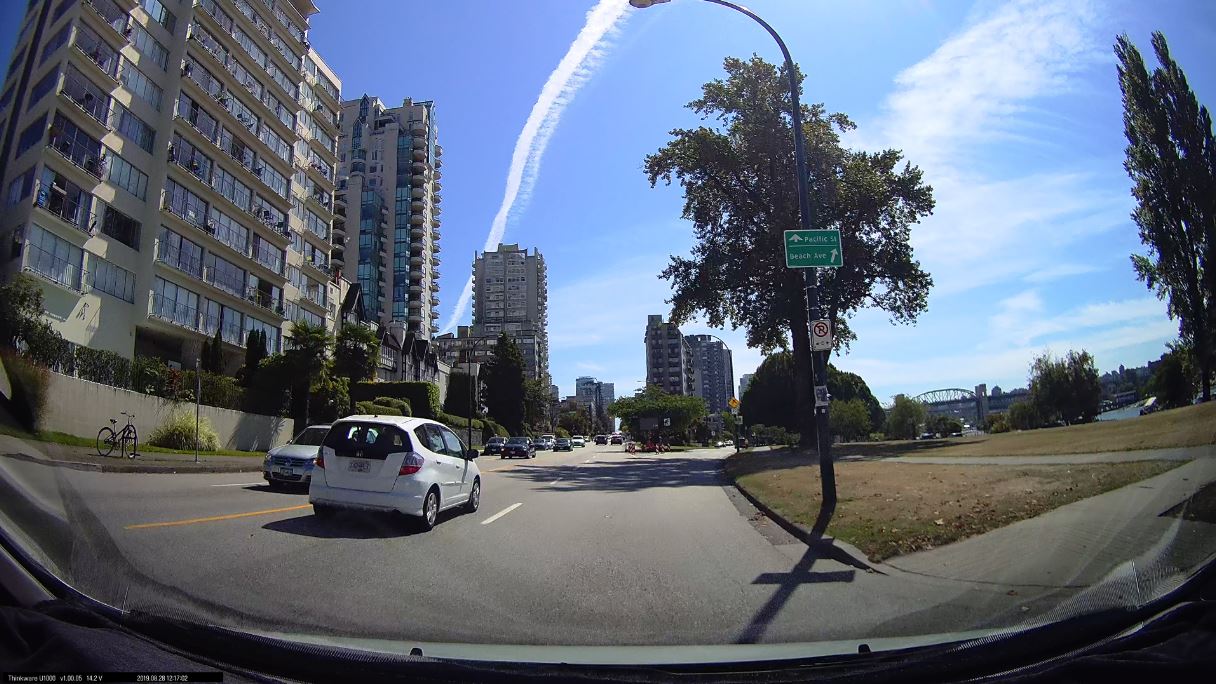 The only downside of the ultra-HD recording is that the video files are very large. The U1000 will automatically “loop” recordings, which means that it will continually overwrite the oldest part of the video, only storing the last 90 minutes or so of footage. On the one hand, this is more than enough time to capture anything you need. However, if you need to save video for longer, you’ll need to transfer it to another device quickly.

Where the U1000 really shines is at night. Not only does it feature night vision, it features what Thinkware calls “super night vision”. In this mode, you’re not limited to mere black and white or green. You still get as much color as the camera can pick up, which means you can still see some amount of color in twilight, or when objects are within range of your headlights.

If you’re looking for ultra-clear night vision, but you also want a built-in display, the Thinkware X700 will be right up your alley. Not only is it exceptionally clear, but you can record at 15 FPS to save memory. Even better, there’s an ultra-slow “time lapse” mode that records at only 2 FPS. This isn’t useful for entertainment purposes, but it’s more than enough to monitor your car while it’s parked. 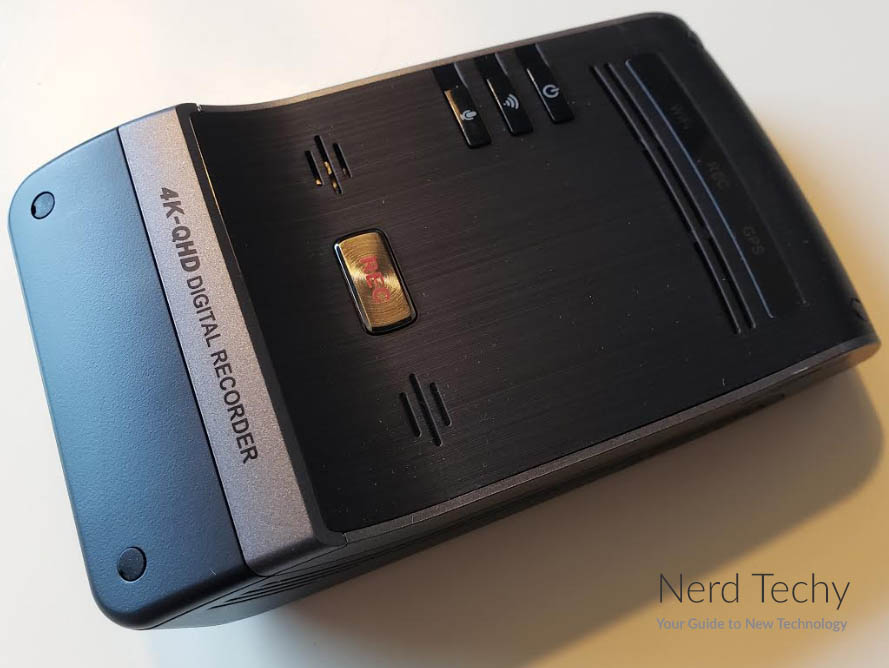 Nowadays, a quality dash cam is a lot more than just a camera. It’s a fully connected device, just like your smartphone. The camera comes pre-configured for the cloud, but it requires an internet hot spot in your car. This can either be a built-in hotspot or you can use your phone. You’ll get better results with a built-in hotspot, since you won’t be able to use any remote features if your camera is only online when you’re in the car. Mobile features do require you to install the Thinkware Cloud app on your phone. It’s available for free both in the Apple Store and on Google Play. 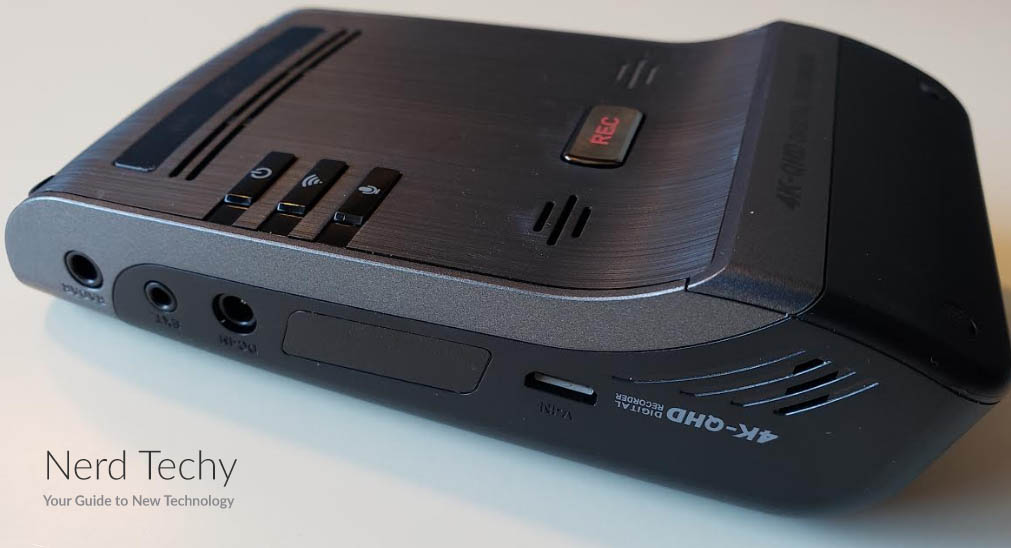 This app allows for several unique features. To begin with, it lets you download and save video from the camera to your phone. This is critical in the aftermath of an accident, or if your car has been vandalized, since it will prevent the video from getting overwritten. You can also view a live stream from your phone, from anywhere in the world. This is a great feature if you have teenagers, so you can keep an eye on their driving habits. Even better, the U1000 allows for geo fencing. You can set a boundary on Google Maps, and your phone will receive an alert if your car goes outside those boundaries. So if your teenager is supposed to be driving to school, you can receive an alert if your car is suddenly on the other side of town.

One more neat feature is that you’ll receive push notifications if the car is involved in a crash. This works because the U1000 features a built-in accelerometer. When it senses a sudden change in velocity, it will alert your phone, and you can instantly pull up a video feed to see what’s going on. The accelerometer is very sensitive, so it will even sense if you get bumped in a parking lot. On the other hand, it’s also been known to trigger from a sudden, abrupt stop, but better safe than sorry. 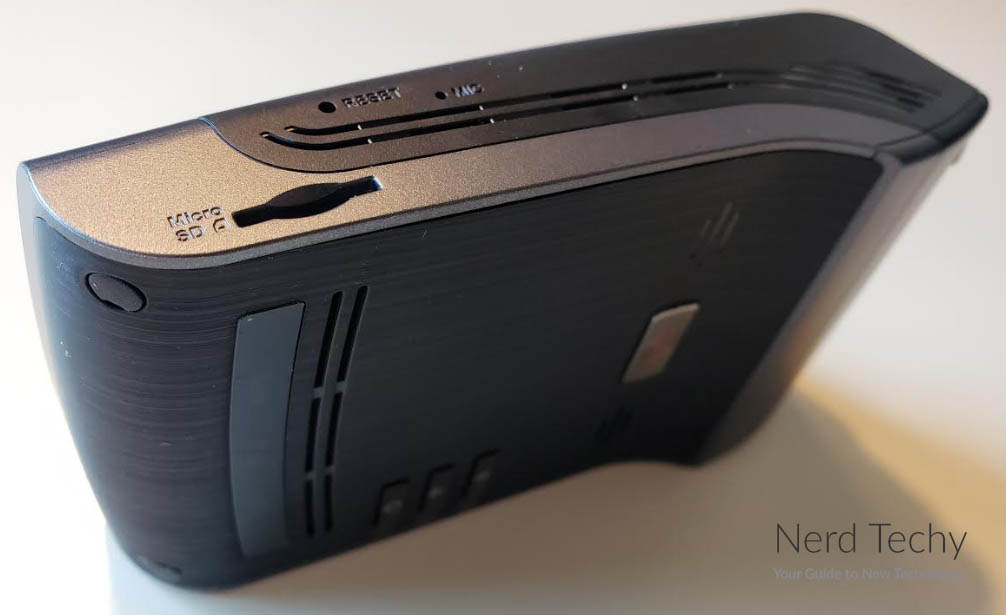 The U1000 also comes with some extra safety features. In addition to all of the other cloud services, Thinkware can also provide traffic and road condition alerts based on your location. This is a common feature on GPS devices, but if you’re not using a GPS it’s a nice touch. You’ll also receive similar alerts for speed traps, although we’re honestly not sure how this works since there’s no way to report a speed trap. We’re guessing that Thinkware’s cloud service gets this information from some other GPS app, like Waze, but honestly that’s just conjecture. 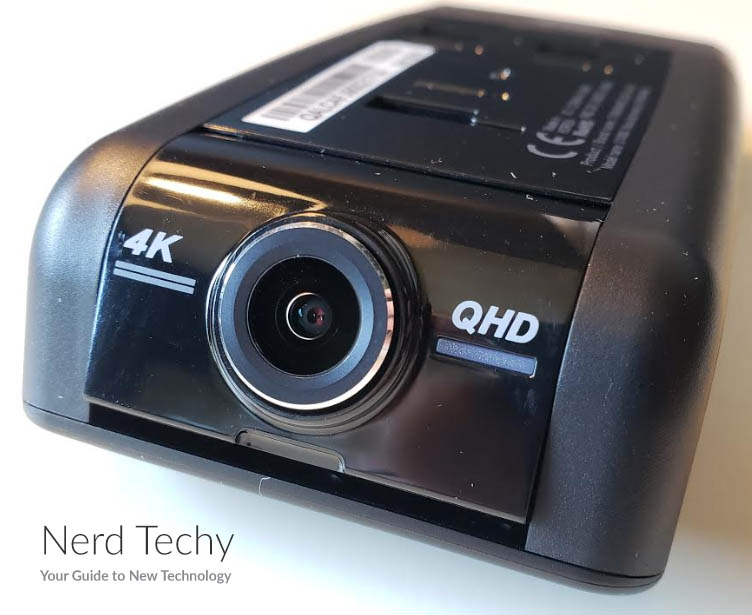 Finally, Thinkware has built motion detectors into its software, and uses some of the latest technology you’ll find on self-driving cars. And while it’s not actually capable of driving your car – maybe Thinkware’s saving that feature for their next offering – it is capable of alerting you to hazards. Your camera will sound a loud alarm when another driver suddenly veers into your lane, or if you’re drifting out of your lane. Just like with a real self-driving car, these features aren’t designed to replace your own eyeballs and alertness, but they’re a good safety backup. 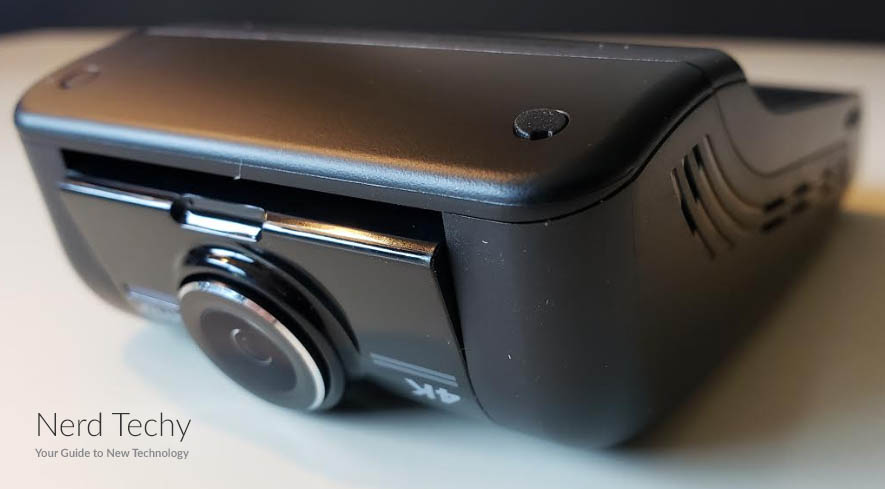 If you want even more environmental awareness, read our review of the Cobra Road Scout. This dash cam is a combination of a camera and a radar detector. It scans X-band, which is usually just a false alarm, along with K and Ka bands that are generally used by police. In addition, it has a laser detector, but if you’re picking up a laser, it’s already seen you, so you’re already going to get a ticket. Check your state laws before buying this device; radar detectors are illegal in some states.

If you’re skimming this article for the most pertinent facts, here’s a quick overview of the U1000’s main features, benefits, and specifications. 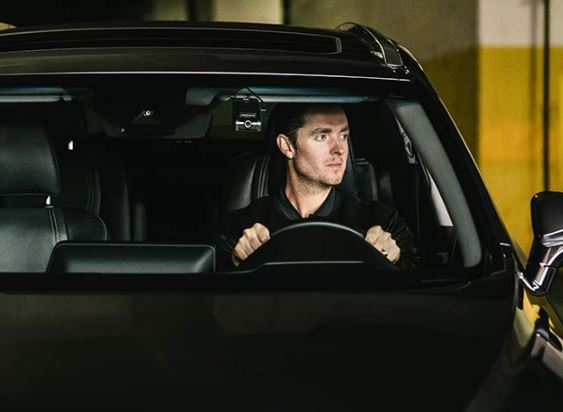 The Thinkware U1000 is a full-featured dash cam with a lot to offer. To begin with, we loved the clear, 4K video. We especially appreciated the high quality of the night vision. It obviously doesn’t show as much color as you’ll see during the daytime, but it’s significantly more detailed than you’ll see from a typical black and white or green night vision camera. 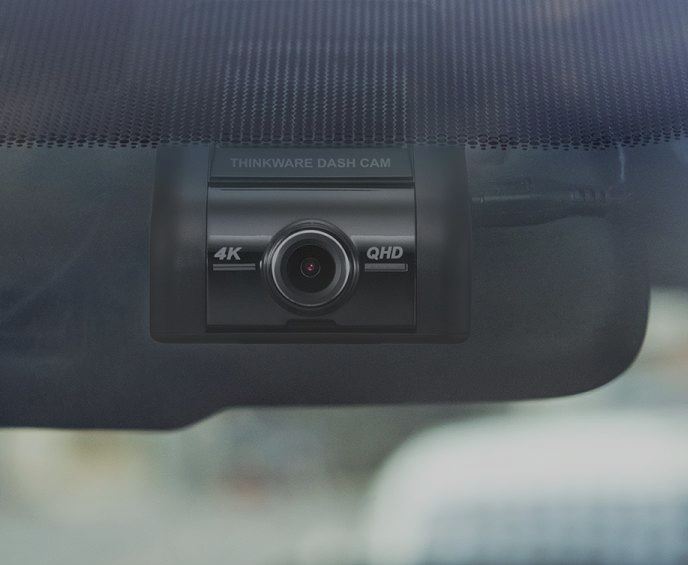 In addition, it’s tough to beat the U1000’s cloud features. The geo fencing and remote viewing are ideal for parents, while the road condition and traffic alerts are useful for anybody. In addition, the impact alerts are a great extra touch, since you’ll know immediately if your car has been in an accident. All in all, it’s a great value for the money, and it’s definitely worth buying.