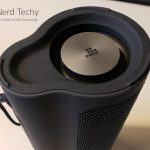 If you want audio for your home or business, it’s tough to argue with a good pair of Bluetooth speakers. This wasn’t always the case. In fact, until just a few years ago, Bluetooth audio was notorious for sounding hollow or tinny. If you had to run long wires for your stereo system, that was just the price of entry. Either that, or you could use a boom box or other portable speaker for an outdoor event.

But time and technology march ever forwards, and modern Bluetooth signals are more than good enough for audio. Now, if you’re having a barbecue, you just bust out the Bluetooth speaker. Similarly, if you’re running a business, you don’t have to worry about expensive wiring. You can just install some Bluetooth speakers and play your audio from a central location.

That said, some Bluetooth speakers are better designed than others. If you want good quality, it’s smart to stick with a reliable manufacturer, and Tronsmart is one of the best. They’re known for high-quality audio equipment, including wireless headphones as well as speakers. So we were excited to check out their Force 2 Bluetooth Speaker.

To find out how the Force 2 performs, it’s important to look at more than one aspect. We’ll start with the physical construction, and how well the speaker is built. Next, we’ll talk about the internal gadgetry: the battery life and the Bluetooth connectivity. Finally, we’ll look at the meat and potatoes of any speaker: the quality of the audio. At that point, we’ll know everything we need to know to render our verdict. 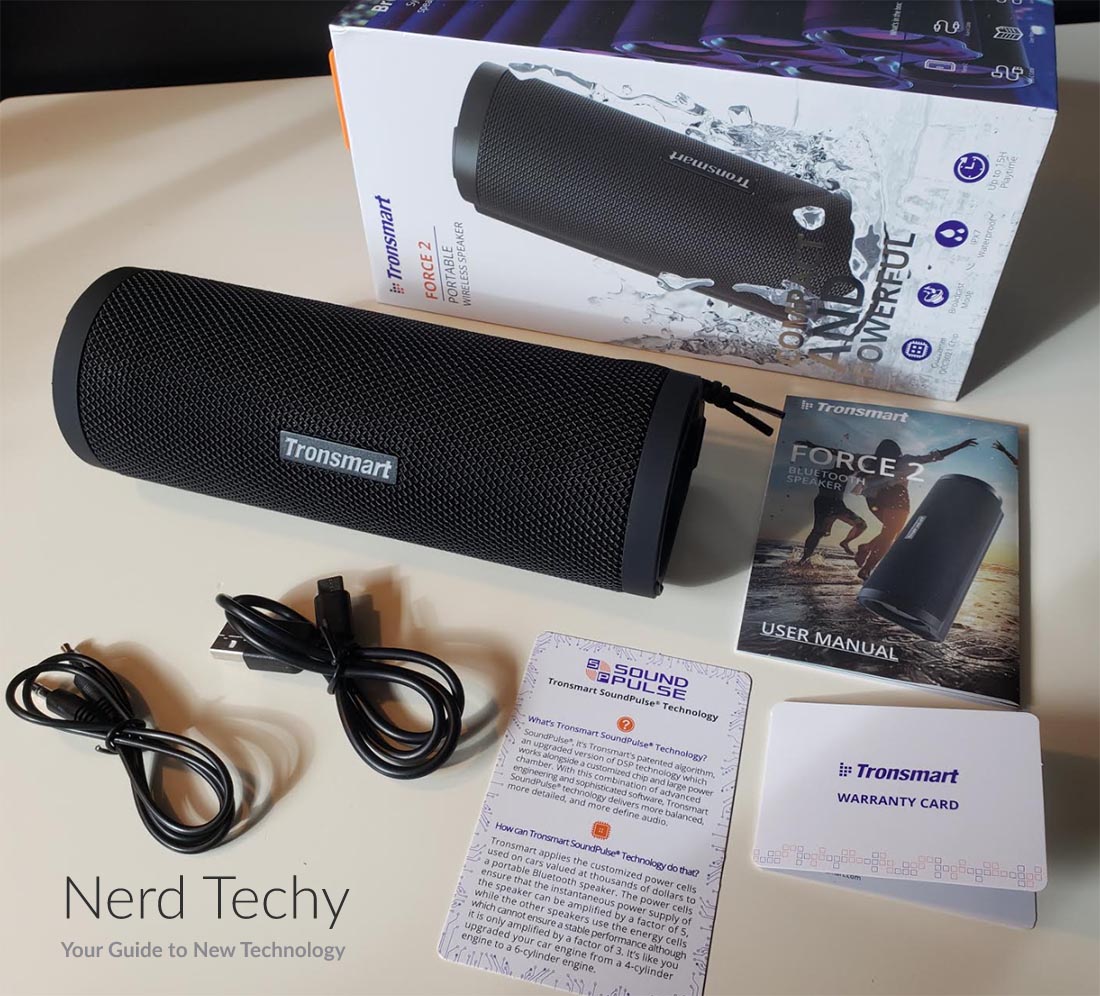 The Tronsmart Force 2 is a compact speaker constructed from black polymer. It’s cylindrical in shape, measuring 6.42 inches wide, 2.83 inches deep, and 2.52 inches high. It can also be stood up on end, or carried in a bicycle’s water bottle holder. At just over 22 ounces, it’s reasonably lightweight, a hair heavier than a standard-sized bottled water. As a result, you’ll find that it’s fairly easy to transport, no matter where you’re going.

The front of the unit is occupied by a mesh speaker grille, which wraps around to the top and the bottom. On the sides, you’ll see additional coverings which look like speakers, but which actually cover the passive radiators. We’ll talk about the radiators in more detail in a little bit. 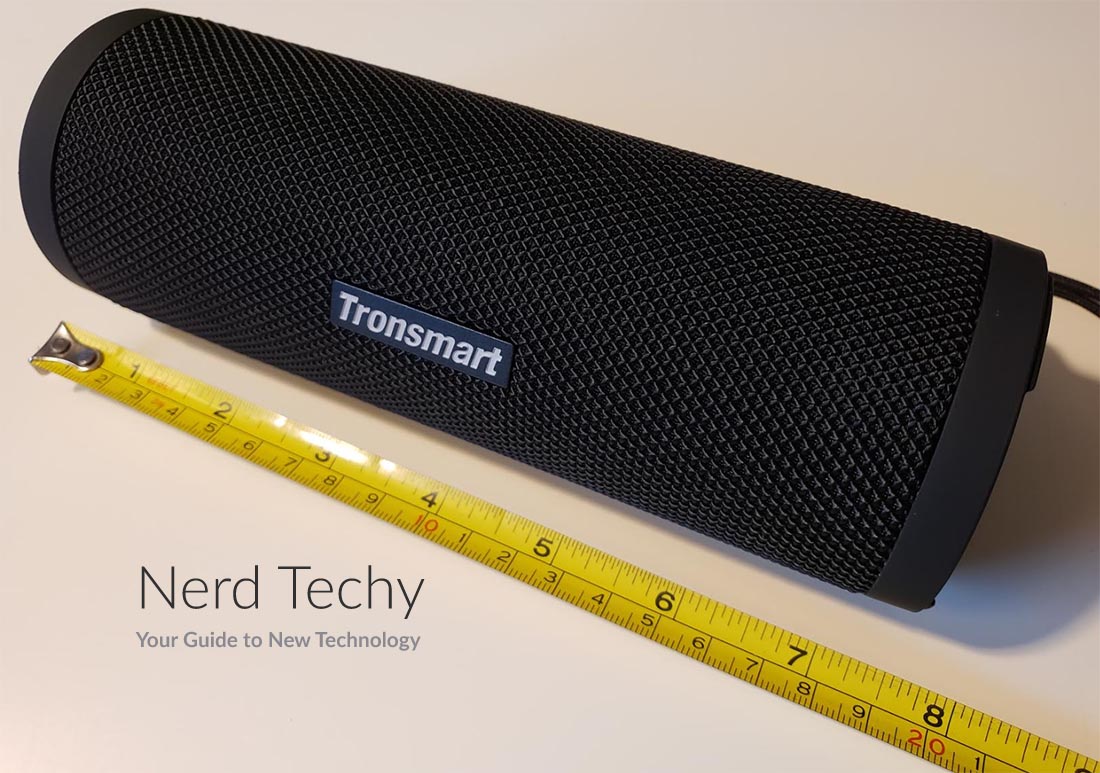 On the rear of the Force 2, you’ll find the controls. These are all soft, rubbery buttons, so they’re easy to press. Even so, they’re not a true “soft touch” design, which we actually prefer. This way, you don’t have to worry about skipping tracks just because your finger brushed a button. There are four buttons in total. The first is a power button, which should be self-explanatory. The next two adjust the volume if they’re pressed, or skip tracks if they’re held. The last is a Bluetooth button for putting the speaker into pairing mode. Finally, you’ll see a tiny pinhole next to the power button. This is the reset button, and you’ll need a paper clip or pin to activate it.

Of course, there are other control schemes out there, and you might prefer different options. For instance, the Tronsmart T6 Plus (Upgraded Edition) has a nifty volume dial for precise adjustment. It also puts out 360-degree sound, although the 20-watt speakers aren’t as powerful as the Force 2’s. 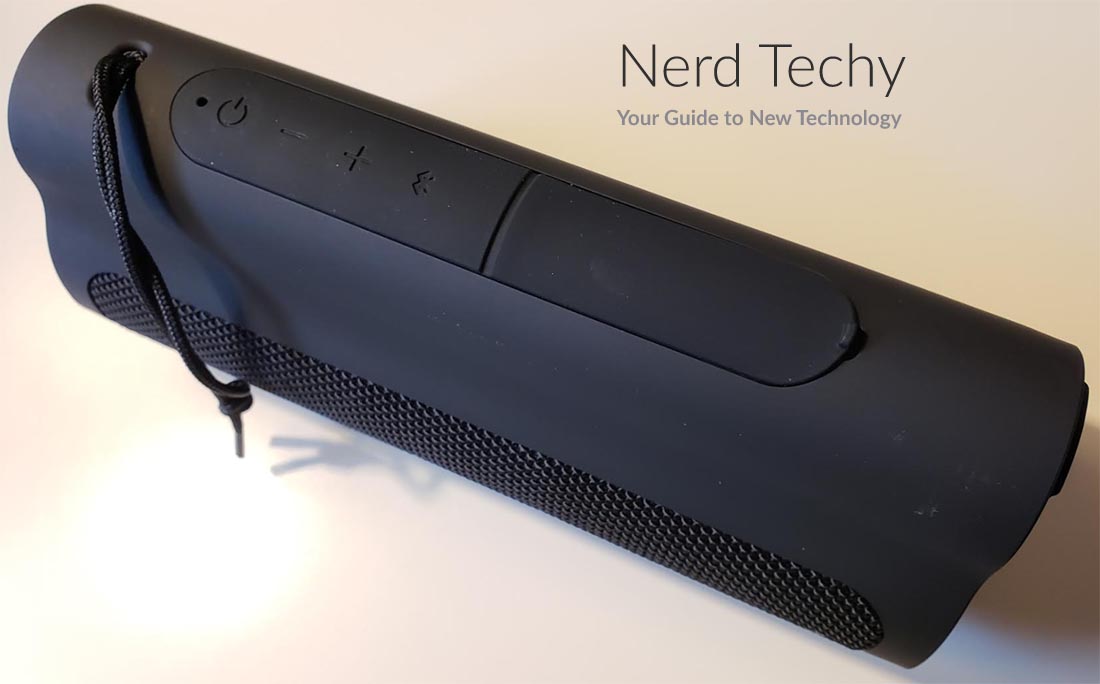 Next to the Force 2’s controls, you’ll find a removable rubber plug. This plug covers a USB Type-C port and a 3.5mm aux port. Both Type-C and 3.5mm aux cables are included in the kit, so you have everything you need to get started. There’s also a lanyard included in the packaging. You can use that for securing the Force 2 to a backpack, or anything else you want to tie it to.

When the rubber port cover plug is in place, the Force 2 is IPX7-rated for water resistance. This goes far beyond your ordinary splash-proof rating. It means the Force 2 can be fully submerged at a depth of one meter for as long as 30 minutes. If anything does go wrong, you’re covered by Tronsmart’s 12-month manufacturer’s warranty. There’s also a warranty card included in the package. Send the card in or register online, and the warranty will be extended to 18 months. 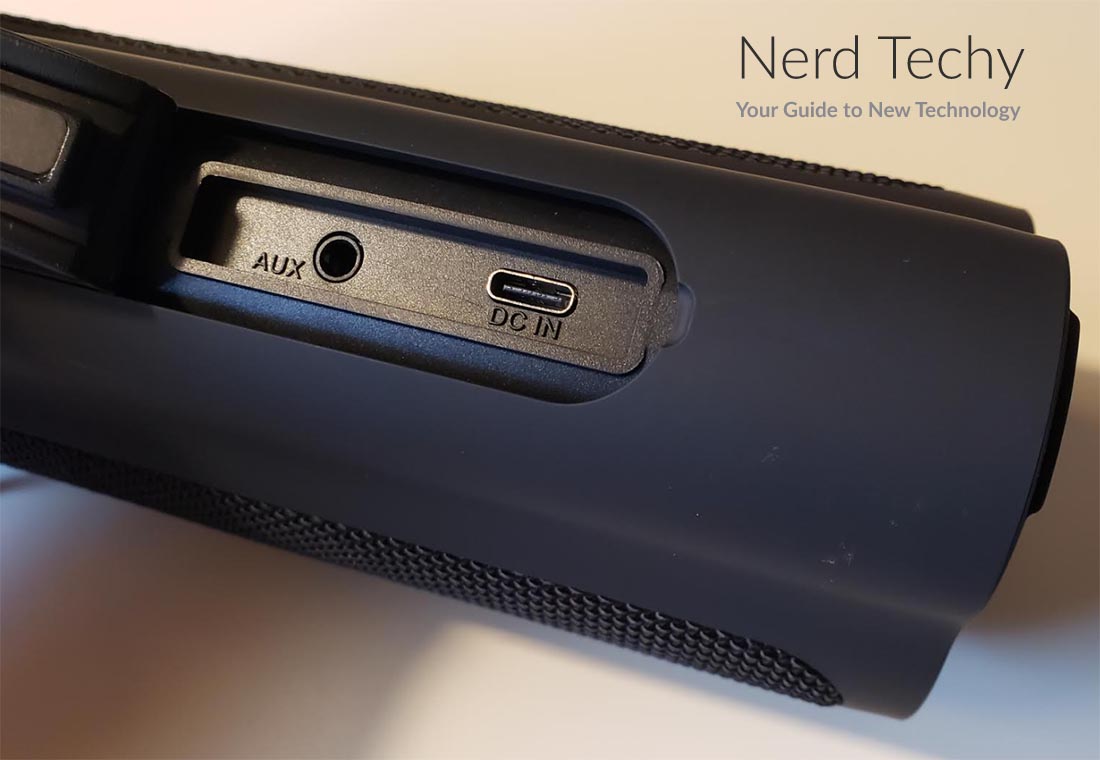 The Tronsmart Force 2 is rated to last for 15 hours on a full charge. However, this rating assumes a volume of 50 percent. Depending on how loud you like your music, the actual performance might be longer or shorter. It can also vary depending on bitrate, temperature, and other factors. Even so, seven to eight hours is about as short as it gets, even at full volume. For most people, that’s more than long enough.

When the battery does go dead, it charges in about three to four hours via USB Type-C. If the speaker is going to be in permanent use, like in a business, it can be left plugged in all the time. This will ruin your battery over time, but it works well enough for a permanent installation.

The Force 2 connects via the Bluetooth 5.0 protocol. This is the latest Bluetooth standard used by almost every smartphone on the market. It’s superior to the older Bluetooth 4.2 protocol for a few reasons. First, it allows for higher audio bitrates, so you can enjoy HD audio. Secondly, it has lower latency than older Bluetooth versions. This makes it suitable for gaming or watching movies, because the audio and video stay in sync. Finally, Bluetooth 5.0 has a more stable signal. As a result, you don’t have to worry about the speaker disconnecting at random. 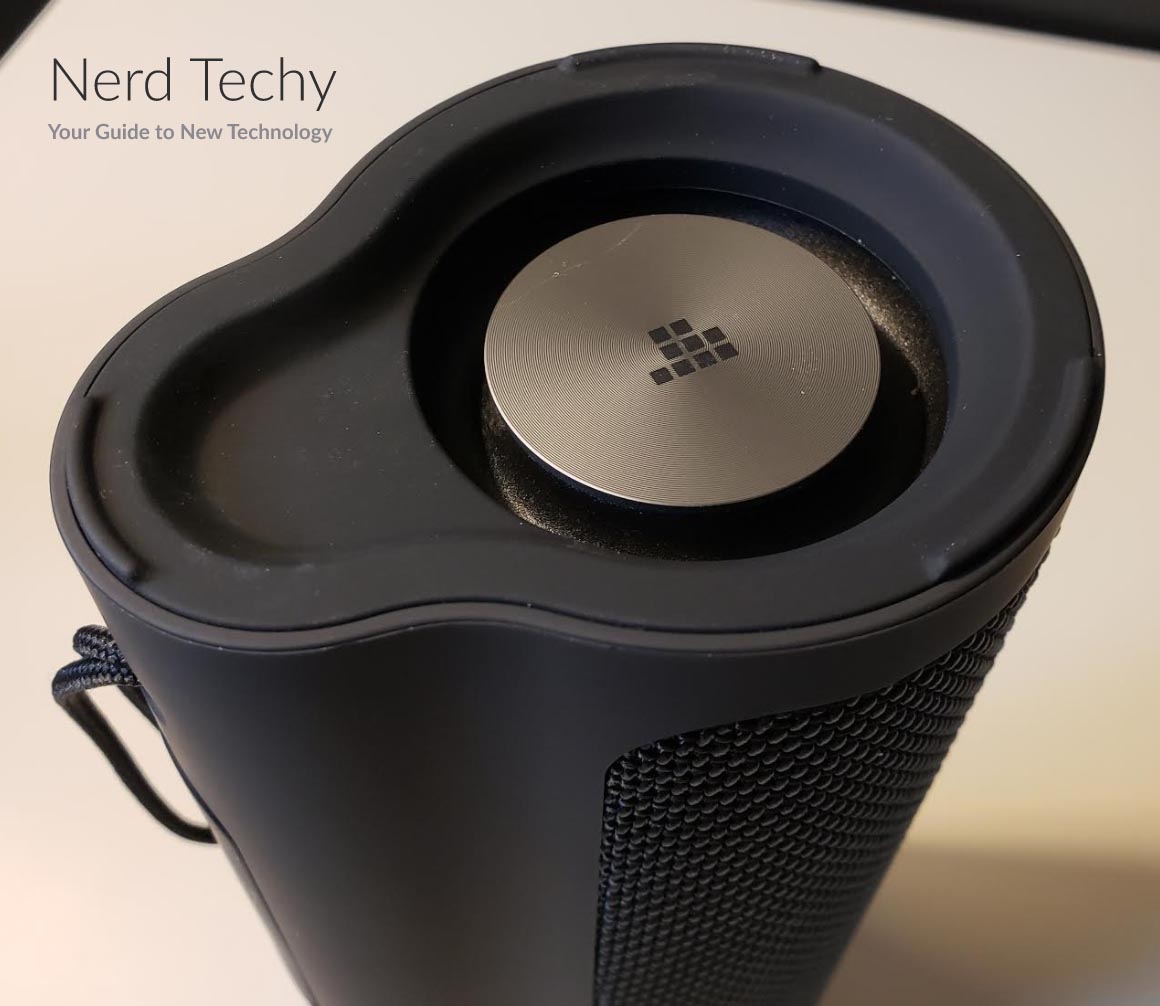 In addition to all that, the Force 2 offers some extra connectivity features that put it a step ahead of the competition. For home users, it allows you to summon your voice assistant. Just tap the top of the speaker, and Siri, Alexa, or Google Assistant will greet you. This function requires the Force 2 to be connected to a device with a voice assistant installed.

For wider-scale applications, multiple Force 2 speakers can be synced together. You can sync up to 100 speakers, so you can cover even a very large business with the same audio signal. In this mode, one speaker will be the primary, while others will need to be linked, one after the other.

Alternatively, you can connect a single Force 2 speaker with the 3.5mm aux cable. With the aux cable, the speaker won’t need to rely on battery power, so you can listen indefinitely. Not only that, but you won’t have to mess around with Bluetooth pairing. On the other hand, a wired connection eliminates many of the advantages of a wireless speaker. And with the port cover plug removed, the speaker isn’t water-resistant. 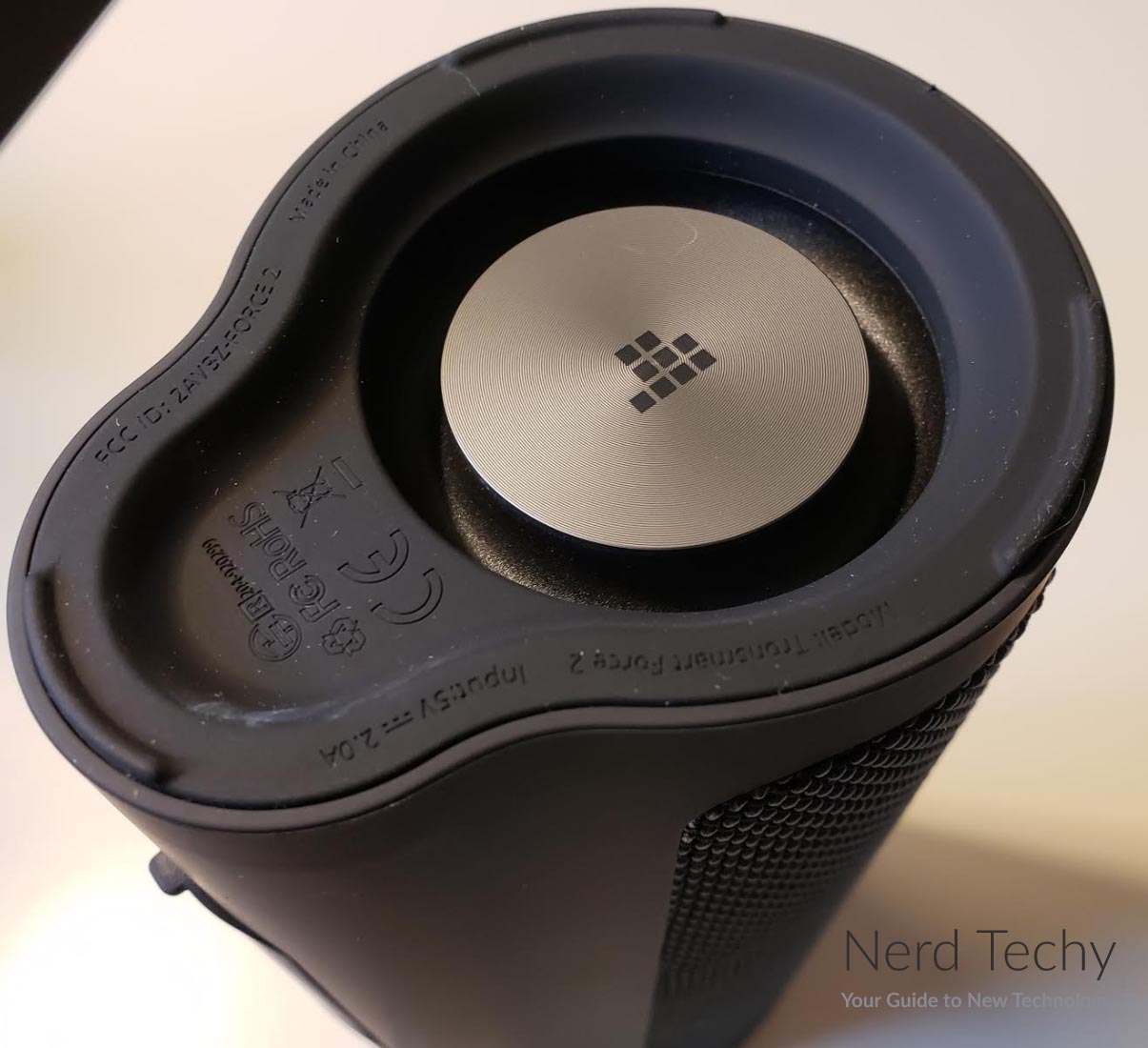 The internal drivers are the heart and soul of any speaker, and the Force 2 is no different. It sports not just one, but two 30-watt drivers. These are larger and more powerful than most Bluetooth speaker drivers, and the difference is noticeable. The drivers have no trouble producing big, bold sound. In addition to the main speakers in the front, there are also passive radiators on the sides. These aren’t powered. Instead, they have special membranes that are designed to vibrate along with the rest of the speaker. The result is a bit of extra volume boost to both sides.

Sound is good across the spectrum, from the high end to the low end. The highs have plenty of sparkle, with none of the sibilance you expect from cheaper speakers. The mids are rich and fully present, ideal for any genre that’s heavy on the vocals. The bass is also nice and rich, with plenty of detail. It’s not a heavy, dance music bass, but it’s not too quiet, either. If anything, the EQ would best be described as “level”. 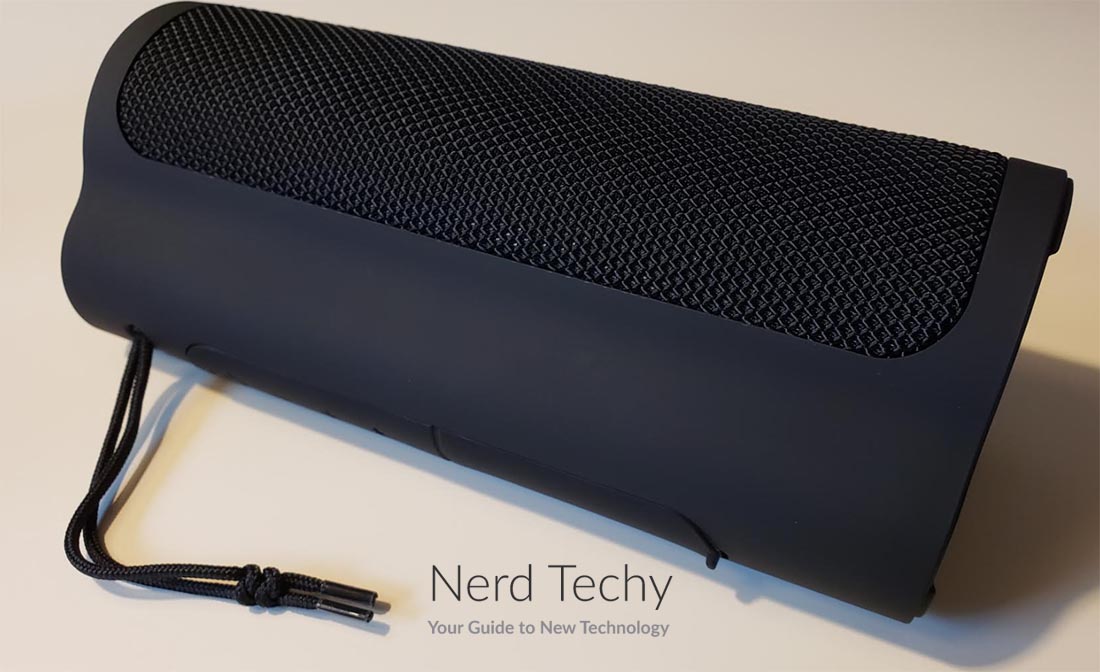 The soundstage is also nice and wide. This is also something you won’t find on Bluetooth speakers. The reason the Force 2 is able to provide plenty of space is that it’s a true stereo speaker. With a pair of drivers, it’s able to create a better sense of space than a single driver.
The only real downside here is that the Force 2 doesn’t have any subwoofers. As we already noted, the 30-watt drivers move a lot of air. But for all of that, you might want a little more punch on the low end. In that case, consider the Tronsmart Mega Pro. This powerful speaker offers double the power of the Force 2, with large, 60-watt drivers. On the downside, it’s both bulkier and pricier than the Force 2.

As with most pieces of technology, whether or not the Tronsmart Force 2 is a good choice depends on you. For instance, do you need a cheap speaker for throwaway use? In that case, it’s probably not your best choice. Similarly, if you want a ton of bass, you’ll probably want to look for something a bit more substantial. That said, the Force 2 is one of the better Bluetooth speakers we’ve seen, for several reasons. 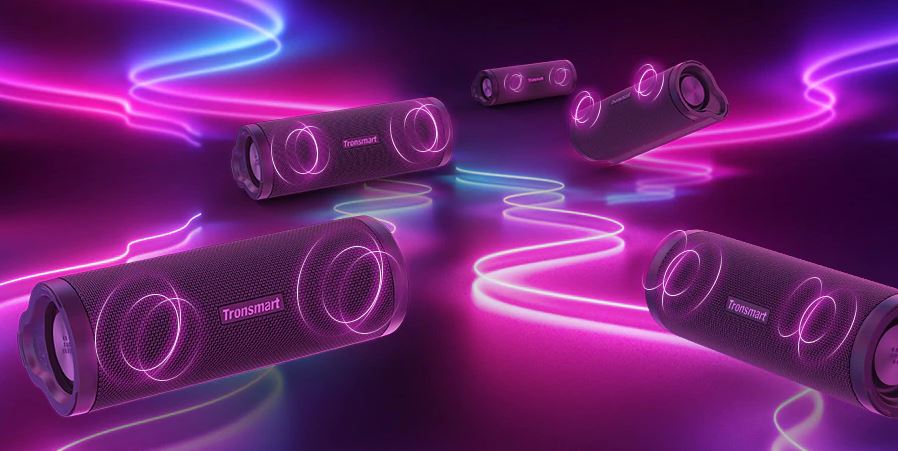 To begin with, you get a sturdy, waterproof design. You also get a speaker that’s well-sized and well-shaped. At less than 1 ½ pounds, it’s lightweight enough to carry anywhere. And it’s just the right shape to fit in a water bottle holder. You also get very good performance from the 30-watt speakers. They provide rich stereo audio with good quality across the whole sound spectrum. You won’t often get audio this full at this size. Finally, you get a good quality battery, as well as the ability to connect 100 speakers. This makes the Force 2 suitable for both very large and very small applications.