It can be hard to find the right projector. Certainly far more difficult than finding a TV. You have to think about where the projector will be positioned, how large the display will be, and even how bright the room happens to be. But if you’re looking specifically for an entertainment projector, it’s much simpler to end up with the right unit.

The VANKYO Leisure 420 is an upgraded version of the Leisure 410, one of the more popular VANKYO projectors. The 420 essentially improves on everything that people liked about the 410. More than anything else, upgraded LED lighting make the Leisure 420 a little more suitable for creating cinematic experiences. 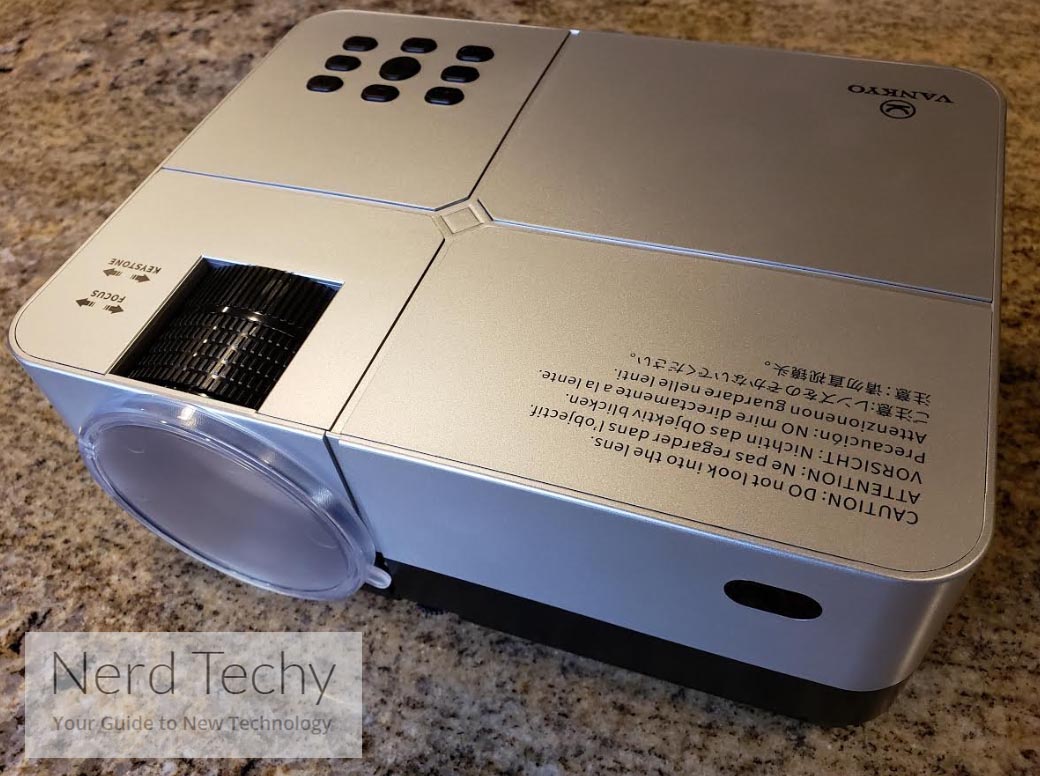 While the Leisure 420 is incredibly portable, its core features were made rather specifically with home theaters in mind. This projector isn’t for professional presentations. Its resolution support just isn’t going to cut-it when it comes to presenting small text. But specifically for movies? The Leisure 420 could be one of the most cost effective ways to get your hands on a reasonably good projector.

The Leisure 420 measures 12 x 8.18 x 4.33-inches, and weighs just under three pounds. That’s more or less the same as the 410, making both about the same size as a small desktop computer. And very much like its predecessor, the Leisure 420 was made with a compact gray chassis, and is highlighted with a gray band which runs along its underside. 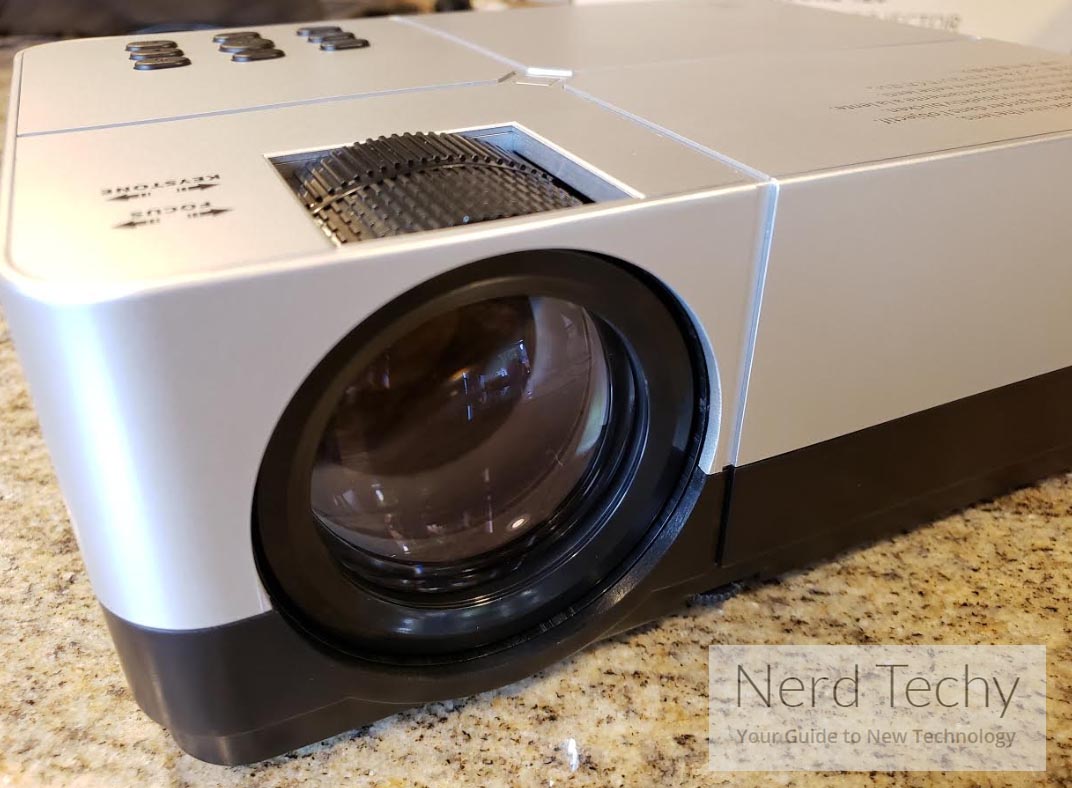 Because this is intended to be a portable projector, the power cord can be detached and packed away. Pretty convenient, though not quite as fancy as high-end projectors that store their cables internally, and allow you to extend them when necessary. The cable itself runs approximately five feet, which should prevent plenty of people from needing an extension cord.

The top face of the Leisure 420 has a large analogue focus wheel. Just beneath that is another wheel of equal size, which can be used for keystone correction. The keystone correction can adjust in a range of ±15 degrees. That’s fairly standard for a projector like this, but it’s not enough for many types of steep ceiling installations. 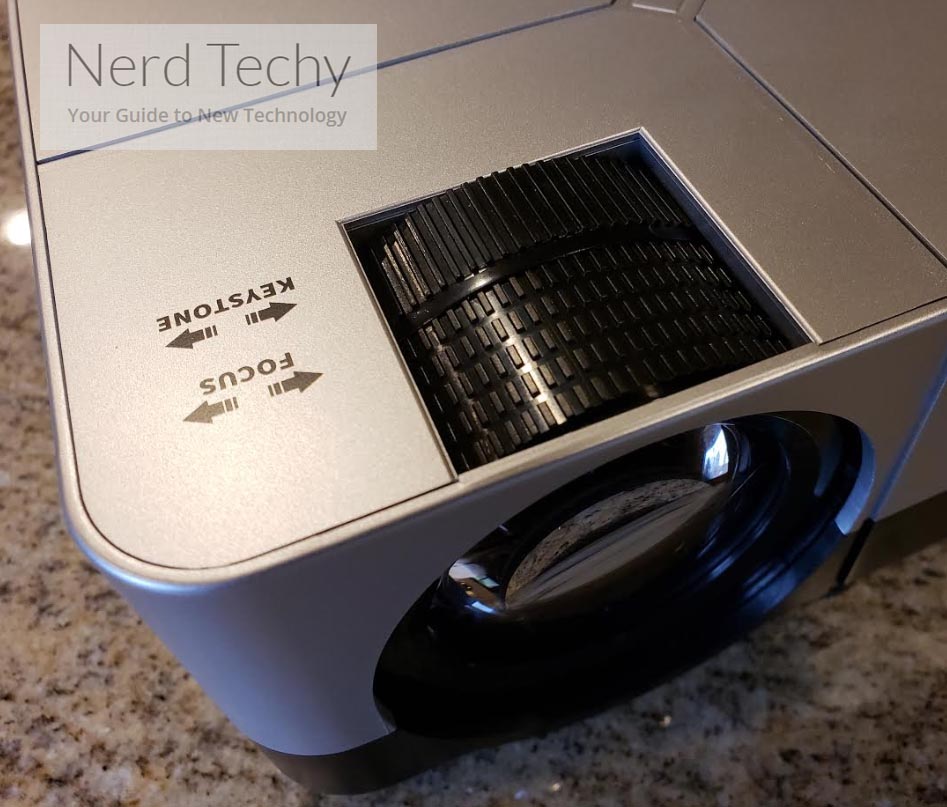 If you couldn’t tell from a glance, both focus and keystone correction are manual, but that’s really something you’ve got to expect from a projector in this price range. Making manual adjustments isn’t too tedious because the wheel provides firm feedback against your fingers as it turns.

Another thing found on the topside of the projector is a nine-digit keypad. They can be used as arrow directional keys, with the central button working as a confirmation key. They can also be used to toggle between input sources and configuration menus.

Unfortunately, like with the 410, the Leisure 420 does not do a good job labeling these buttons. But their layout is intuitive enough for most people to stumble through it with some practice. It also helps if you take a look at the included user manual to help get your bearings.

The VANKYO Leisure 420 was made to offer a front-to-rear projection, reaching from 40” to 200”. That’s about thirty inches larger than the Leisure 410 was capable of achieving. Those sizes are appropriate for the projector being positioned between 4ft and 21ft away. 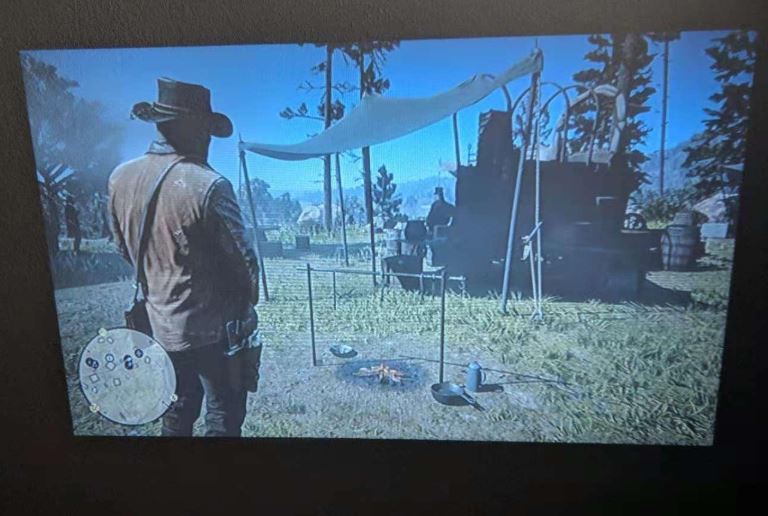 For an optimal picture, you’d really want to keep the projector close to 8ft away. You want to stay around 8-feet because the Leisure 420 makes use of a fairly low native resolution of 480p.

When this projector describes itself as a 1080p projector, what it really means is that it’s capable of playing 1080p content. If that’s confusing, think of it this way. It’s like running a 4K movie on your 1080p television. The movie will play, but it’s not going to look any better than 1080p content because it’s playing on a 1080p television! 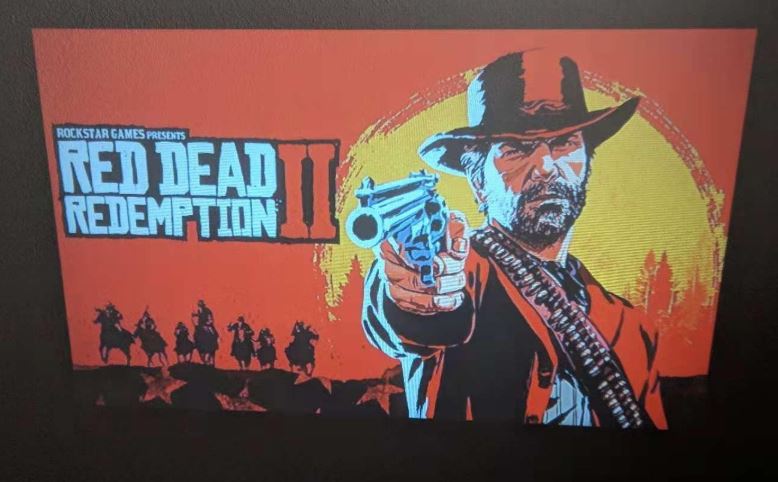 That’s not to say the Leisure 420 doesn’t look nice. It really delivers on cinematic appeal thanks to its use of a 16.7 million color LED chip. That’s basically the same range of colors you’ll find on most computer monitors and LED televisions. And the Leisure 420 makes use of the MStar Advanced Color Engine, which is responsible for keeping those colors bright. 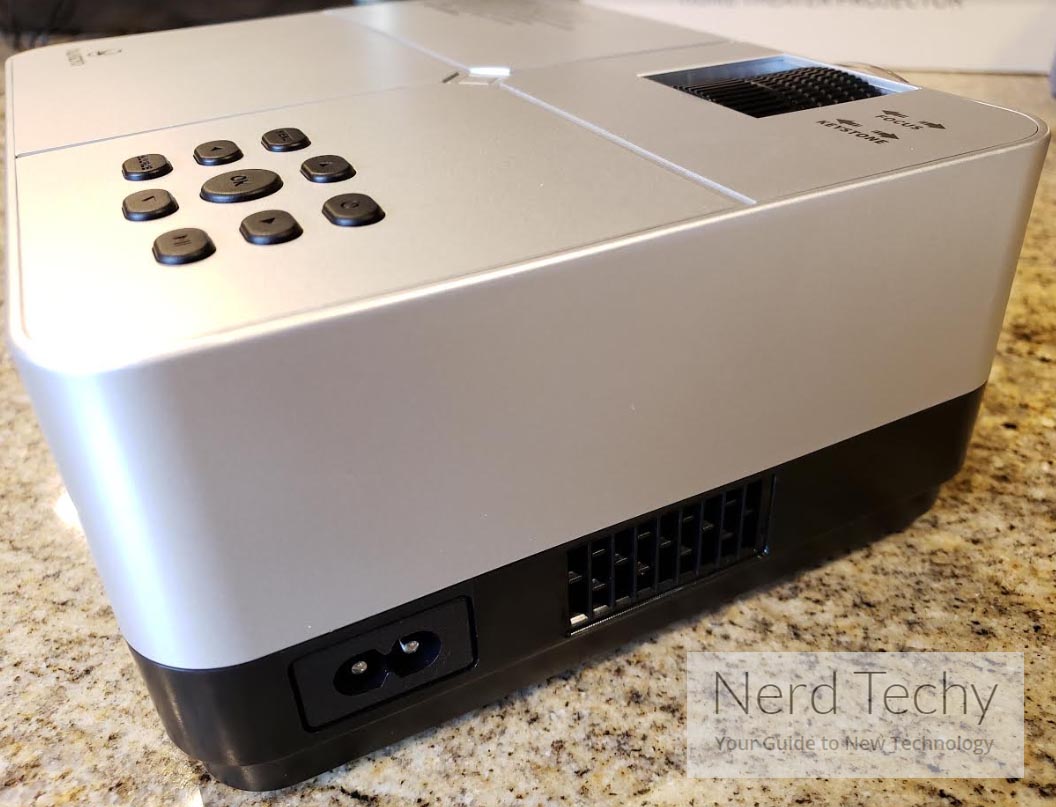 Though a 2000:1 contrast ratio is nothing to boast about, it’s certainly enough for a pleasant cinematic viewing experience. Likewise, the Leisure 420 supports both 4:3 and 16:9 aspect ratio, yet another factor that allows it to facilitates a variety of cinematic experiences.

Finally, there’s brightness. The Leisure 420 is capable of blasting out 3200 lux. Compared to any number of similar home theater projectors, you’ll find that number is close to high-average.

But it doesn’t mean you’ll want to use the Leisure 420 in the middle of a sunny day. If you hope to achieve anything near its true potential, you’ll still need to make use of the VANKYO 420 in a darkened room with the curtains drawn.

To resolve these types of issues, the Leisure 420 takes many of the same steps as the 410. That basically means using a fan noise suppression system, which can reduce noise and heat simultaneously. The VANKYO system seems to drop fan noise by about half, compared to similarly sized equipment.

If all projectors have one flaw in common, it has to be terrible speakers. The VANKYO 420 describes their audio equipment is upgraded, and brags about its superior bass performance. It’s certainly upgraded over the 410, but that wasn’t a high bar to leap over.

The Leisure 420 sounds exactly like you would expect from a pair of small speakers crammed into a tiny projector chassis. The speakers are somewhat better than a smartphone, especially with respect to their maximum volume. But if you’re interested in a truly immersive audio experience, then like with almost any other projector, you’re going to have to add some aftermarket speakers. 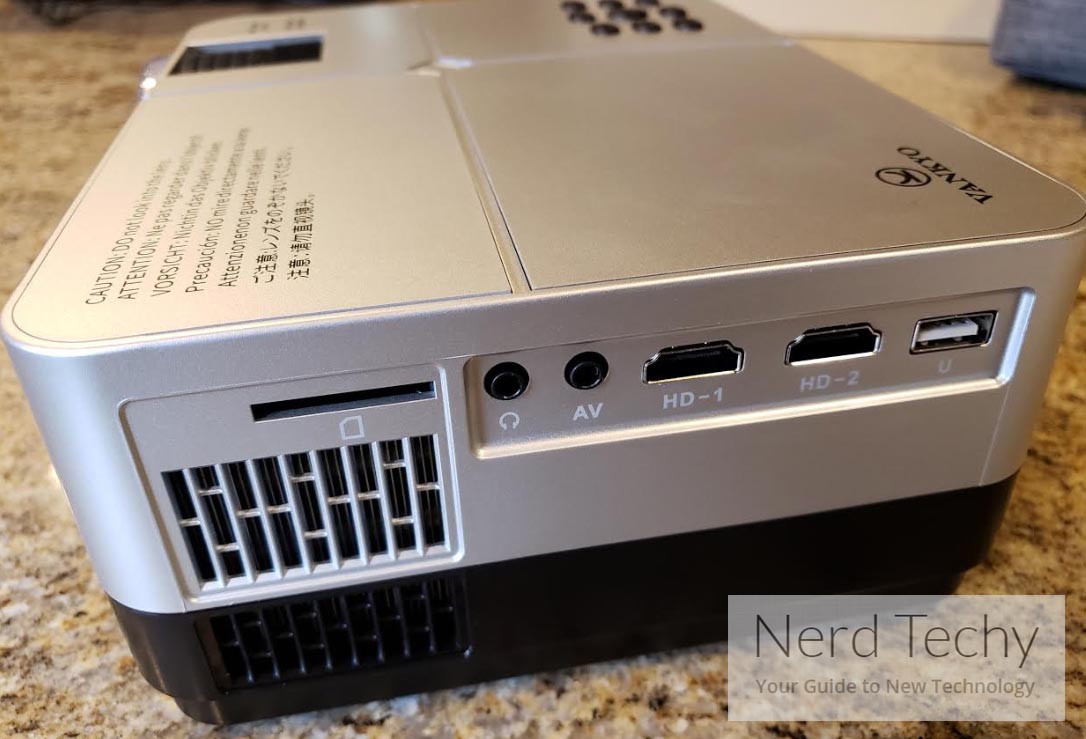 The projector connects with your media through an SD card, VGA cable, one of two HDMI ports, an AV cable, or through USB. That allows the Leisure 420 to connect with virtually any gaming console, streaming service, or mobile device that you might be interested in using. And it supports essentially any video file format you might be able to think up. 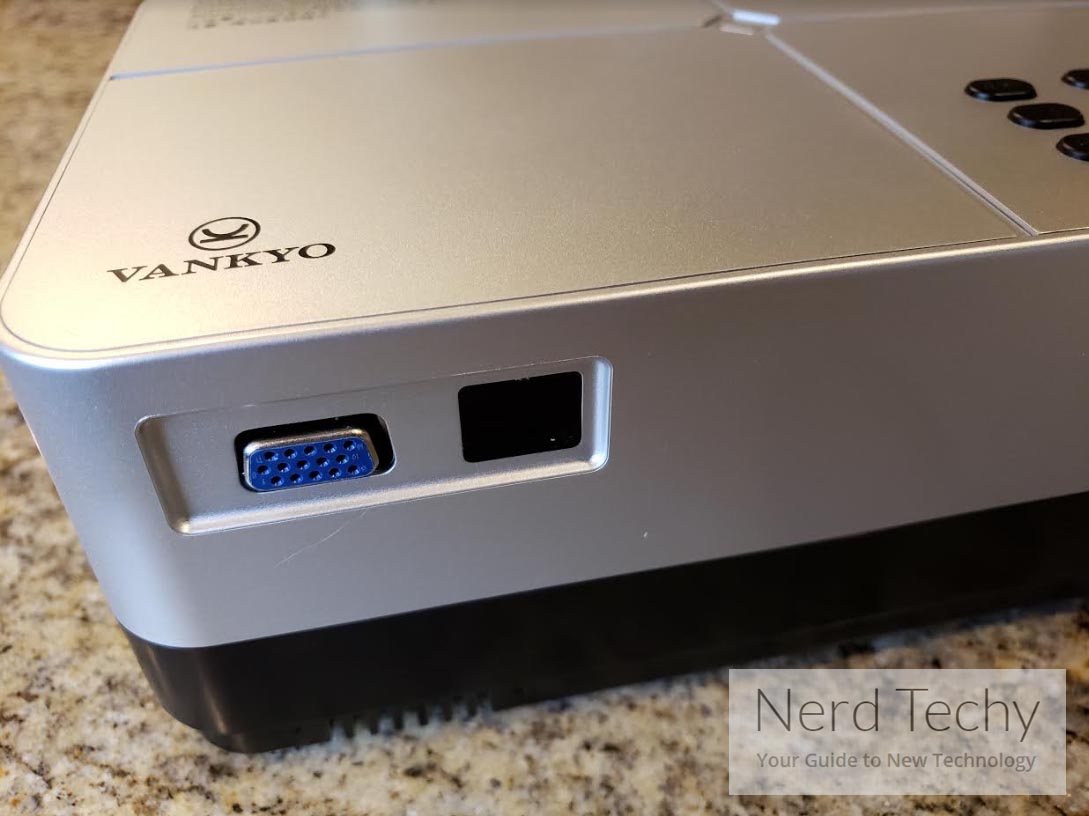 In place of analogue remotes, many projectors are making the move to app control. It’s not hard to think of some pros and cons to both options. But having a standard remote around is generally the simplest way to go, and it’s what to expect from projectors in this price range. 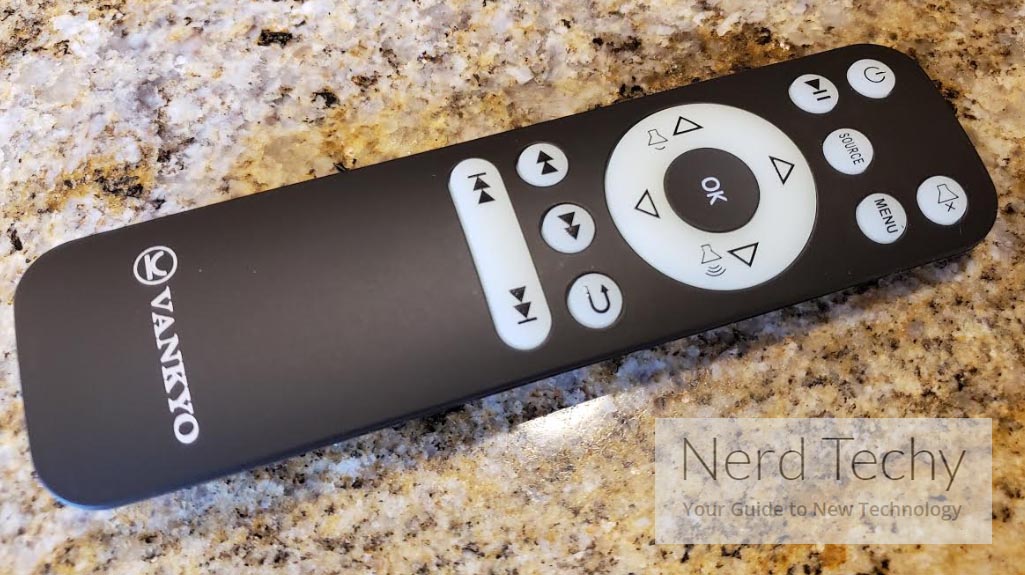 Like almost all VANKYO projectors, the Leisure 420 includes its own remote. The remote is smartly designed, and comes close to imitating the controls found directly on the body of the Leisure 420 LED Projector.

It’s basically a nine-digit keypad, plus a few channel and volume buttons. By the time you’ve become familiar with one set of controls, you’ll have discovered you’ll adept at using both. However, this is an IR remote. You’ll need the remote to be directly pointed at the Leisure 420, similar to using a TV remote.

The Leisure 420 is not built to support PowerPoint. It’s not well suited for professional presentations. Though you could try using it for that kind of activity, the results would be subpar. While the 480p resolution is suitable for watching films, it can have a negative impact on the clarity of text. Anyone who hopes to use text-based presentations, especially with smaller fonts, would quickly run into significant issues.

Similar to the Leisure 410, the VANKYO Leisure 420 uses an LED bulb estimated to have a 40,000-hour lifespan. That works out to about five years of continuous use. If you watched a couple of movies every day, you’d still end up with decades of cinematic experiences before the bulb died out. 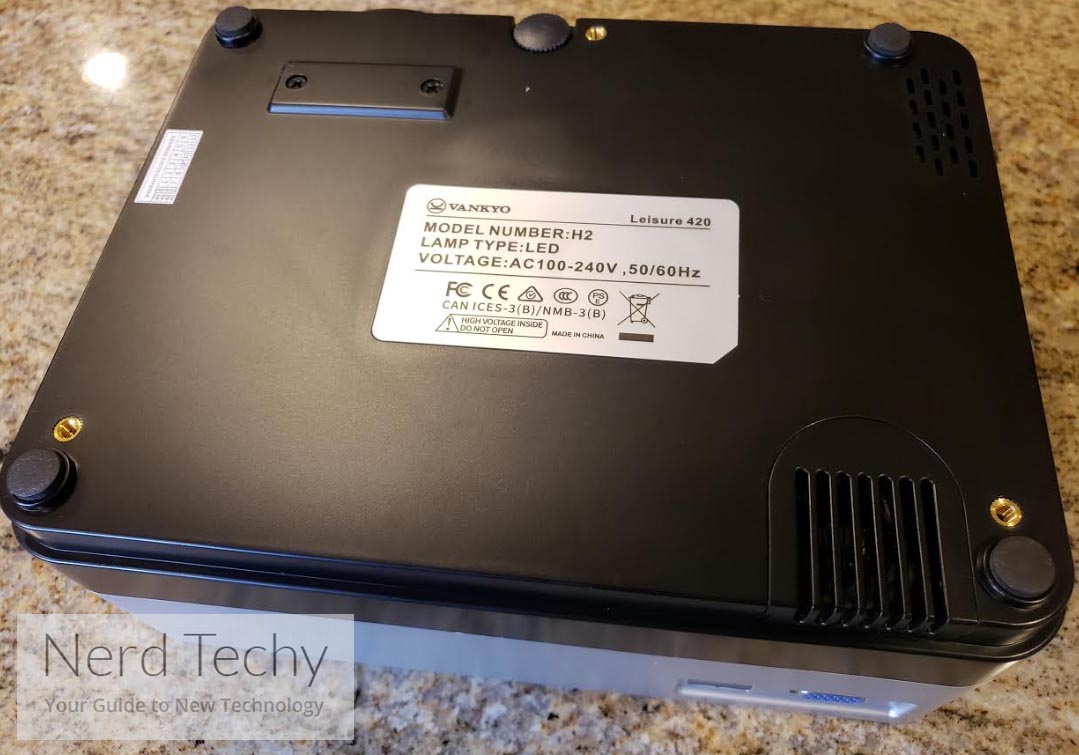 Two things to keep in mind. If you take a three-hour break between operation, you can extend the lifespan of the bulb considerably. And if you really want to maintain the excellent out-of-the-box video quality of the Leisure 420, then you’re going to have to change the bulb about half-way through its lifespan. That still works out to several years of playtime before you have to think about it, and the replacement isn’t too costly or difficult.

The VANKYO Leisure 420 LED Projector includes a carrying bag was constructed specifically for the 420. Made precisely for its square shape, it’s ideal for both storage and carrying. It also has room for the included HDMI, VGA, power, and AV cables. A three-year warranty is also included, though VANKYO does not include the three AAA batteries you’ll want to shove in the included remote.

Who Should Choose the VANKYO Leisure 420?

When you compare abilities to cost, the Leisure 420 is quite impressive. It offers every tool necessary for setting up your own home theater. Looking at its ease of use, you might complain about the manual focus, but that’s an expensive problem to fix. 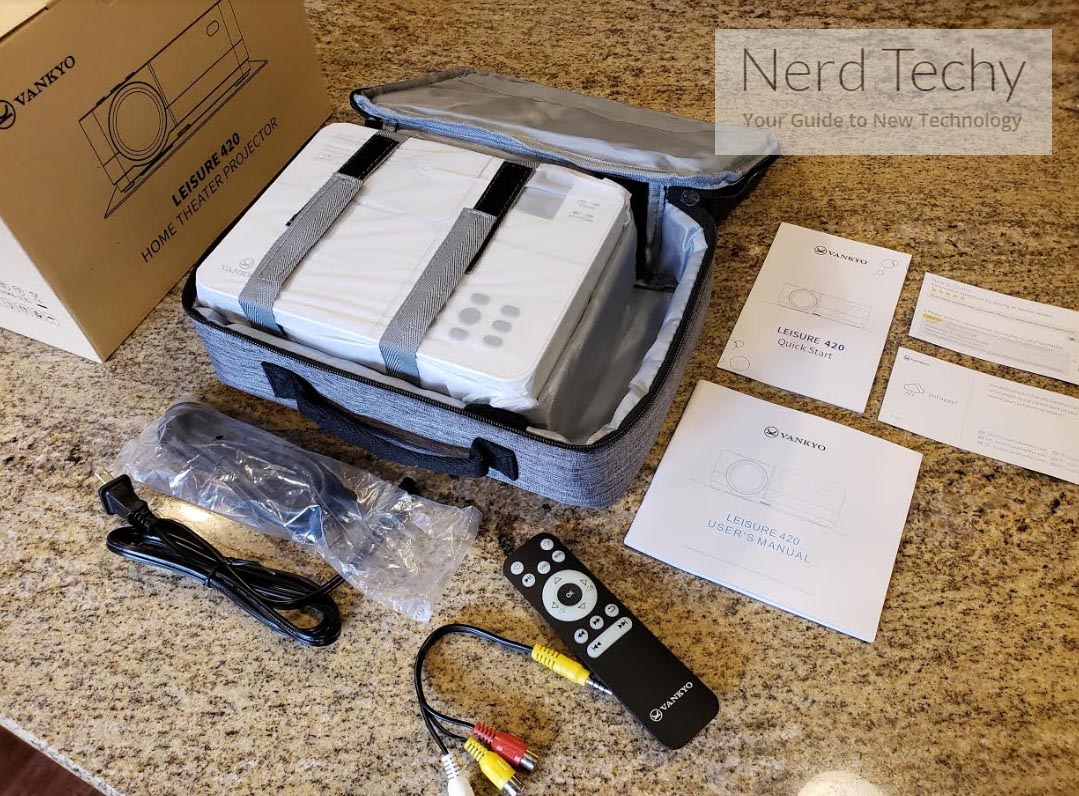 The 420 includes tons of extra connection cables, which only adds to its already high value. Because they all fit inside the carrying case, you’re essentially guaranteed to have whatever cables you need, anywhere you go. And in addition to a plug-and-play setup, that makes it possible to start watching movies in only a couple of minutes.

The VANKYO Leisure 420 can me turned into a streaming machine with little effort. Were you willing to increase your budget, then you would be able to find projectors with larger resolutions or built-in streaming. But relative to its cost, the Leisure 420 is definitely worth grabbing for someone who doesn’t want to considerably exceed roughly the $100 price point.