This year, we’re seeing the rollout of a new WiFi technology: WiFi 6. Now, regular readers will probably be aware that WiFi 6 has actually been around since last year. But up until now, almost all WiFi 6 devices have been routers. After all, you can’t take advantage of WiFi 6 devices if your router doesn’t support WiFi 6. For this reason, manufacturers chose to start by releasing compatible routers. But with the holiday season right around the corner, we’re about to see a surge of WiFi 6 devices. In other words, if you haven’t bought a WiFi 6 router yet, now is the time.

But while you’re shopping around, you might be thinking about rejiggering your home network. Is now the time to switch your PC or game console to a WiFi connection? What about your streaming devices? As with so many things, it really depends on what you need to get out of your wireless connection. We’re about to compare the latest wireless protocol with a wired, Ethernet connection. Then we’ll be able to tell you what works, and what doesn’t. Let’s begin!

How Fast is Ethernet?

Before we make any kind of comparison, it’s important to establish a baseline. How fast is ordinary Ethernet? Most home Ethernet cards offer speeds of up to 1,000Mbps (1Gbps), known as Gigabit Ethernet. Gigabit Ethernet has been the standard for over two decades, and superseded older “Fast Ethernet.” While originally developed for backbone wiring in large networks, Gigabit Ethernet has long been a home standard. Unless your home network hardware is literally decades old, you’re already using Gigabit Ethernet.

Gigabit Ethernet runs primarily over Category 5 (Cat5e) Ethernet cords. This is the familiar cord that runs from your modem to your router. Some home networks use Cat6e instead, but the cable looks the same at a casual glance. Cat6e cable is similar to Cat5e in most cases. Cat6e can handle faster-than-Gigabit speeds, but this typically is not needed for home use. Similarly, Ethernet signals can also be carried over fiber optic cable. This allows for longer runs without the need for a repeater or booster. With fiber optic, you can make up to a 5,000-meter (3.1-mile) connection using a single cable. Needless to say, fiber optic is almost exclusively used for commercial applications.

Some Ethernet systems run at 10-Gigabit (10,000Mbps) speeds. This is the newest and fastest standards, enough to stream dozens of 4K movies simultaneously. 10-Gigabit Ethernet requires a more advanced Cat6a or Cat7 cable in order to work. These are heavier-duty cables that are a bit beefier than Cat5 or Cat6. However, they still use the same tip. Because these speeds are well beyond anything you’d ever need at home, 10-Gigabit Ethernet is exclusively commercial. Just as Gigabit Ethernet used to be the standard for network backbones, 10-Gigabit Ethernet is now used. Cat6a and Cat7 cables are used for running this signal over short runs, such as between switches in a rack. For longer runs, fiber-optic cable is generally used. 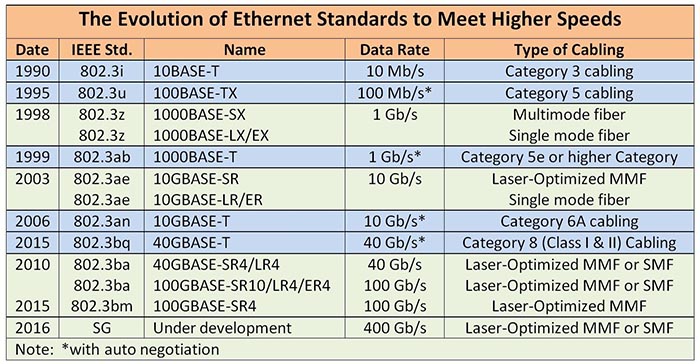 How Fast is Current-Gen WiFi?

Okay, so your home Ethernet connection offers speeds of 1Gbps. That’s pretty fast. As a matter of fact, in most cases, it’s the maximum speed of your home’s entire connection. After all, it connects your router to your modem. If you want any more bandwidth at home, you’ll need a modem-router combo. Otherwise, 1Gb is effectively your limit for the whole network.

Normally, you think of wireless as slower than Ethernet. So, how fast is the current 802.11ac wireless standard? 500Mbps? 200Mbps? 100? In fact, it’s 3.5Gbps. Why so fast? For one thing, this is a theoretical maximum. For example, if you’re right at the edge of your router’s wireless range, you’ll get slower speeds. Similarly, if you have 50 devices connected and sharing that bandwidth, you’ll get slower speeds. As a result, your real-world performance will generally be slower than Ethernet. Even so, for most people, speed isn’t a problem on today’s wireless networks. In fact, the average US home has a download speed of less than 75Mbps. That’s less than 10% of what Ethernet even offers! 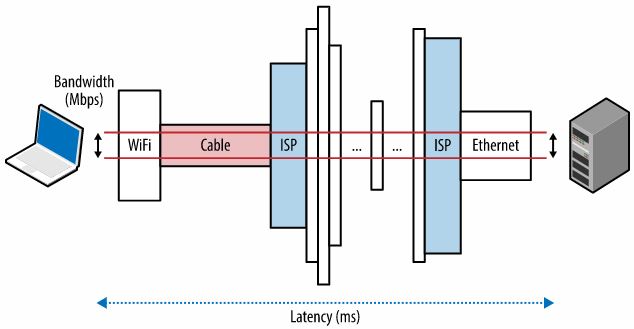 So, why do gamers still prefer Ethernet? The answer is latency. An Ethernet connection might not be any faster than WiFi, but WiFi can introduce over 100ms of latency. If you’re streaming a movie, this isn’t a problem. As a matter of fact, it isn’t a problem for almost any other application. But when every millisecond counts, a WiFi connection can cause you to lose a game. Obviously, this is only relevant for online gaming. If you’re just tooling around in Skyrim, your connection type isn’t going to matter.

Before the development of WiFi 6, WiFi networks used something called a half-duplex connection. In a half-duplex connection, data can only move in one direction at the same time. Let’s say you’re streaming a movie, and you send a Facebook message to your friend. To send the message, the incoming signal must stop temporarily. For our example here, you wouldn’t even notice. The video has buffered, after all, and you could watch for over a minute without an incoming signal. Nonetheless, a half-duplex signal effectively limits you to half your signal’s capacity; hence the name. 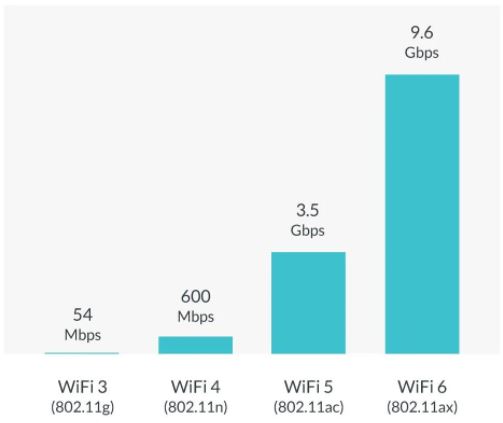 WiFi 6 creates a full-duplex connection between your devices. This means that they can send and receive data simultaneously. The result is a more efficient connection with a maximum bandwidth of 9.6Gbps. Of course, this is a theoretical maximum, but it’s significantly higher than existing WiFi. Even so, as we mentioned, speed should never really be a concern on a home network. So why is WiFi 6 so groundbreaking? Let’s take a closer look!

WiFi 6 is built for the internet of things. Rather than increasing speed for any one device, it’s meant for connecting as many devices as possible. This is a timely invention. When the current 802.11ac format was released, the average US home had five WiFi-connected devices. Today, that number is up to nine, and the explosion of IoT devices is only beginning. Within a few years, even an average home could have dozens of connected devices.

This is a problem for current wireless routers, because there’s a limit to how many devices they can connect to. As more devices are added, the router spends more time switching between them than it does doing anything useful. Connect a dozen or more devices, and your network will slow to a crawl. 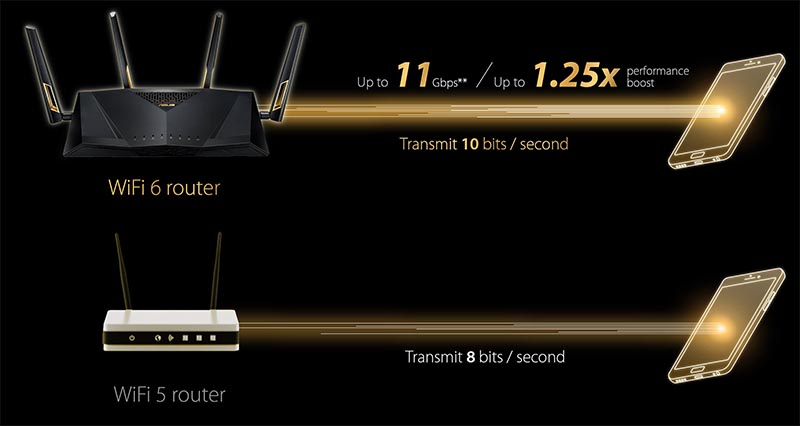 WiFi 6 comes with a host of new technologies that are built with large, complex networks in mind. It allows routers to communicate simultaneously with several different devices. This is thanks to a new technology called 4X4 MU-MIMO. Without getting too far off into the weeds, 4X4 MU-MIMO is engineered to make device switching more efficient. As a result, a WiFi 6 router can communicate seamlessly with more devices. Some models can even support over a hundred simultaneous connections. It’s going to be a long time before you need more connections than that.

So, let’s say you have 50 devices connected. How fast is the connection for each device? The easy way to figure this out would be to divide 9.6Gbps by 50, which gives us about 192Mbps. Of course, that’s a theoretical maximum, and your actual results would be significantly slower. What if you’re trying to watch a movie on your favorite streaming service, or download a large file? You’d be watching a grainy picture, or waiting forever for a download. Thankfully, WiFi 6 can easily manage large amounts of demand from a single device. In that case, each device receives a maximum bandwidth of 1.2Gbps. This maximum is actual, not theoretical.

This works because a WiFi 6 router will intelligently adjust how much bandwidth it offers to each device. For instance, if you have a smart smoke detector, it rarely uses any bandwidth. It will let you know if there’s a fire or a low battery. Other than that, it’s just idling. So instead of allocating 192Mbps to your smoke detector, a WiFi 6 router might allocate 1Mbps. That way, if the smoke detector needs to send a signal, it can. Otherwise, it’s not taking up a whole bunch of wasted bandwidth.

Can my Current Router Use WiFi 6?

In most cases, yes. If you just bought a new router in the last year, it probably supports WiFi 6. Check your manual to be sure, but you should be fine. Other than that, you’re going to need to buy a new router. Older routers won’t be able to interface with your WiFi 6 devices. For other devices, you can more or less take your time. Your current smartphone, laptop, and game console will connect just fine to a WiFi 6 router. They just won’t be able to take advantage of any advanced WiFi 6 features. Over time, your newer devices will naturally have WiFi 6 as you replace them.