The Nintendo Switch Lite game platform has attracted a lot of attention in recent months. Not only does it feature a compact design that falls into the tradition of old-school handheld game systems, but it features the same power as the original Switch, so you don’t need to make any sacrifices in terms of quality or in terms of what games you can play. All in all, it’s a great system!

Sadly, the Switch Lite has been plagued by a lack of compatible accessories. This is an unfortunate oversight on Nintendo’s part, but it’s created a field day for third-party developers, who have stepped in to fill the gap. One such third-party company is 8Bitdo, whose much-anticipated Lite Bluetooth Gamepad will be hitting the market on Wednesday, October 30th.

So, what makes it so special? We’re about to take a close look at this quality controller, and explain what it does – and doesn’t – do best. 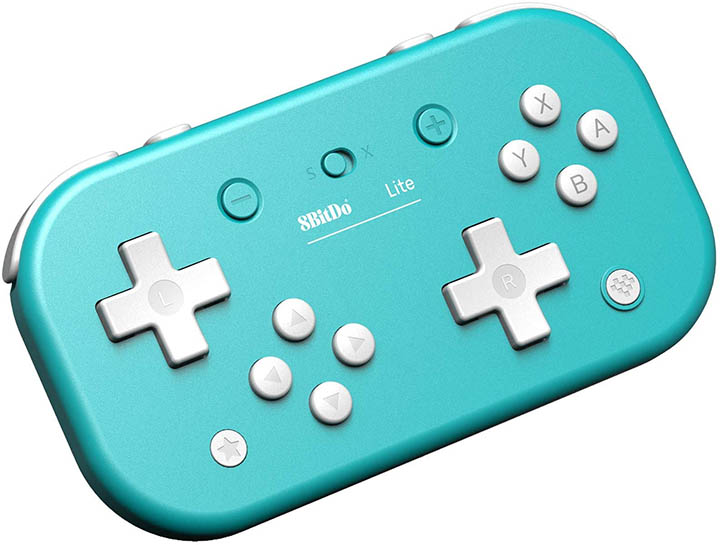 Why Use a Third-Party Controller?

To begin with, why would you use a third-party controller to begin with? Aren’t the manufacturer’s controllers good enough?

Look, we’re not here to knock on Nintendo, but the latest reviews on the Switch Lite have been critical of the controller design. In particular, their famous Joy-Con has come under heavy fire. In particular, gamers have been disappointed by the tendency of the factory joysticks to drift right out of the box. Due to dust buildup, this is expected on a controller that’s three or four years old. But it’s simply not acceptable on a brand new controller, and many Nintendo Switch Lite owners are looking for a solution.

In addition, many Nintendo games are designed for old-school, in-person multiplayer actions. This is a major reason that many people are looking for more controllers. With the ability to play the latest Mario Kart against three of your friends, why settle on a single controller? Best of all, these controllers are compact, with a slim design that we’ll talk about later. Long story short, they’ll fit in your backpack or messenger bag without the need to carry a whole extra storage option. 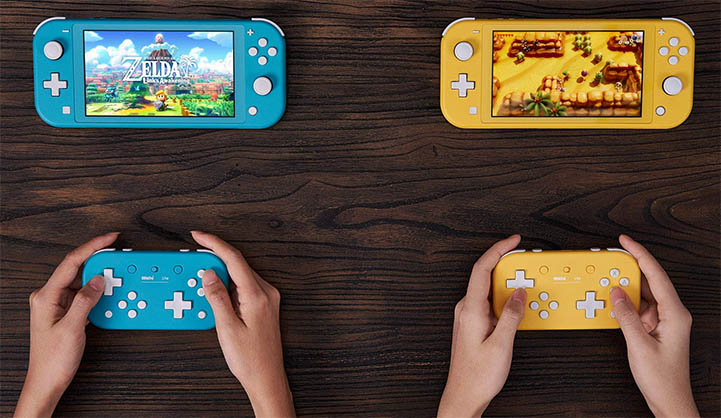 Best of all, a third-party option gives you an alternative to the standard controller layout. This is an especially important feature if you’re not happy with the ergonomics of the original. And you won’t have to pay through the nose, either; the 8Bitdo game pad is priced cheaper than a second Nintendo Switch Lite controller from the manufacturer. All in all, that’s a pretty strong argument for spending a few more dollars on a third-party controller.

So, how exactly does this controller work, compared to your stock Switch Light controller? The main difference lies in the directional controls, which consist of a pair of D-pads, as opposed to the problematic mini joysticks that have plagued Switch Lite since its launch.

This can honestly be a good thing or a bad thing depending on what game you’re playing. If you’re primarily a shooter fan, you probably won’t appreciate the lack of precision. Then again, if you’re a shooter fan, why are you buying a Nintendo Switch Lite? Go buy a PS Vita, for goodness’ sake, and enjoy your shooters! But if your favorite game involves anything remotely resembling a menu, you’ll appreciate the simplicity of the 8Bitdo’s D-pads. 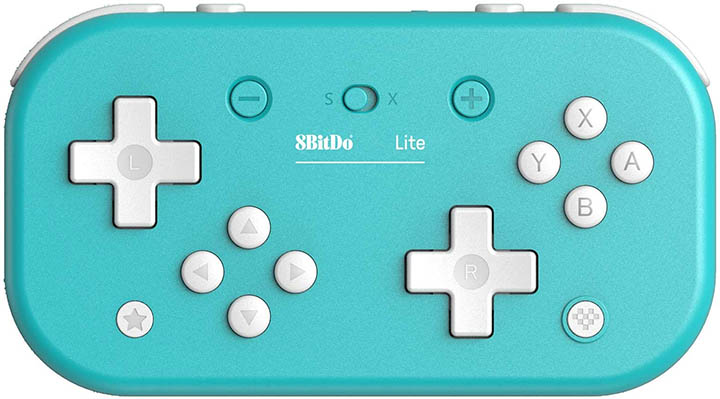 Old-school gamers will especially appreciate the D-pads. You also get the traditional Nintendo A, B, X, and Y buttons, as well as the triggers and bumpers you’d expect from any Nintendo controller. Overall, it’s very well designed. In addition, all you old-timers will also like the retro feel of the buttons themselves. They have a stiff, “clicky” construction, which provides a stark contrast to modern video game controllers, which are generally designed to be as smooth as possible.

In addition, you’ll appreciate the connectivity. This game pad connects via Bluetooth, so you won’t need to worry about any extra cables, dongles, or other funky tools. Just sync it with your Nintendo Switch, and you’ll be ready to go. This makes it easier to use than many other third-party game pads, which are often hard to pair. That said, we understand that a Nintendo-style controller isn’t for everybody, and it also doesn’t cover everybody’s needs. Thankfully, we’ve reviewed many game controllers over the years, designed for many different systems. If you need a controller, but you’re not a Nintendo owner, here are a few options that might be ideal for your needs.

If you’re a Nintendo player, but you’re looking for a controller for the original Switch instead of the Switch Lite, the HORI Nintendo Switch Split Pad Pro Ergonomic Controller might be right up your alley. This controller features upgraded joysticks that are much smoother and sturdier than the ones that you’ll find on a base model Switch. In addition, you’ll also find turbo and remapping options, which allows you to customize the controller to be the best for your favorite games and your own comfort.

For Xbox fans, we’ve reviewed the Nyko Wireless Core Controller. This controller has the same familiar layout as your stock Xbox controller, but with the addition of an LED battery meter underneath the Menu and Back buttons. You’ll also get the macro and turbo option’s that you’d expect from any premium controller, which makes this controller a solid choice for anyone who needs a complex control scheme. If you need rapid-fire or macro options for your Xbox One or OneX, this is an excellent choice. 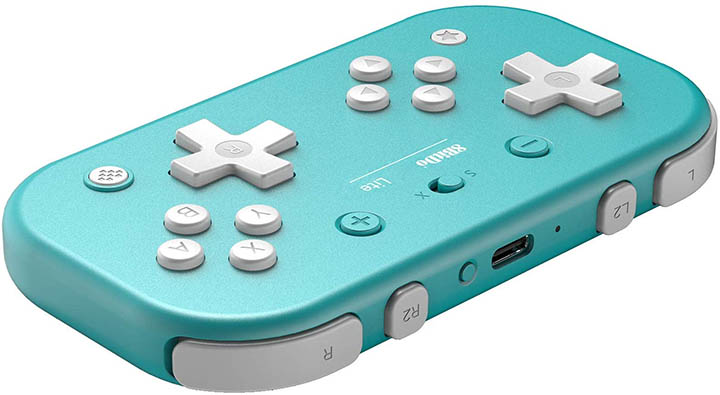 Of course, many PC players prefer a control scheme that allows them to use WASD and mouse controls. This is natural. After all, the unique sensitivity and customizability of PC controls is a major reason that many people are attracted to PC gaming to begin with. The HORI TAC Pro Type M2 is a great choice if you’re in this boat. It consists of a 20-key left-handed keypad, which includes a thumb stick and a pair of programmable buttons. It also includes a high-sensitivity programmable gaming mouse, so you can really up your game without spending a small fortune.

Finally, we can hardly neglect PlayStation fans. The ASTRO Gaming C40 TR is designed to have the same look and feel, right down to the PS4’s famous touch pad in the center of the controller. So why not just go out and buy a stock PS4 controller? The answer is modularity. Every component of the ASTRO Gaming C40 TR is engineered to be replaced by multiple manufacturer parts, including shortened or extended thumb sticks, more or less sensitive buttons, and multicolored LED lights that provide a responsive backlight without being so bright that they’re distracting.

After all of this to-do, you’re probably wondering how the 8Bitdo Lite Bluetooth Gamepad looks and feels. After all, that’s an important aspect of a gaming controller. If it doesn’t feel right in your hand, then it’s not going to be much use, no matter how talented you are. 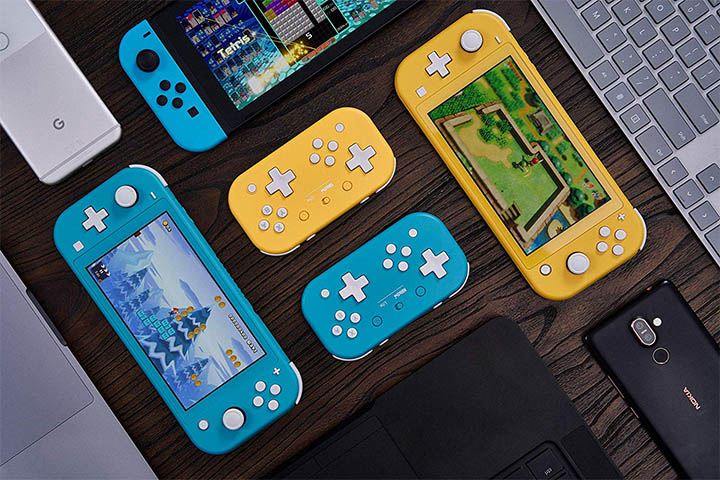 The body itself is constructed from tough, durable ABS plastic. This makes it as reliable as some components of military firearms, much less a game system. Needless to say, you can drop this controller on the floor a million times and it will still work as well as the day you bought it.

As far as appearance goes, the 8Bitdo Lite Bluetooth Gamepad is available in yellow and teal. Both of these colors are attractive, and they provide a high enough contrast to clearly identify whose controller is whose. If you’re a plan of local multiplayer gaming – and we’re guessing we are, if you’re looking at these controllers – you’ll appreciate the ease of identifying each individual controller. This is a great feature, and something that you won’t see from the manufacturer’s default monochrome controllers.

Final Verdict
To make a long story short, if you’re looking for an alternative control scheme for the Nintendo Switch Lite, it’s hard to do better than the 8Bitdo. But there’s more to making a quality controller than just providing an alternative. After all, the alternative needs to be meaningful. This is a relatively high bar to clear. How does the 8Bitdo Lite Bluetooth Gamepad stand up to the competition?

To begin with, it offers a genuinely sturdy case. This sounds like a minimal concern, but it’s not. If you’ve owned several game consoles, whether it be from Sony, Microsoft, Nintendo, or other old-school designs, you’ve doubtless dropped your controller a time or two. And yet, those manufacturer-supplied controllers stand up to a ton of abuse, no matter what you throw at them. This is a massively underappreciated feature of stock game console controllers, and something that most third-party manufacturers should consider. Imagine the outcry if Xbox controllers broke if you dropped them on the ground! It would be catastrophic. Yet third-party manufacturers get away with shoddy design, again and again, simply because they provide a unique-looking design. Rest assured, 8Bitdo does not fall into this category.

They make a well-engineered product, which can stand up to abuse. It can also handle millions of individual button touches, so you’ll be using this controller for years.

Finally, the 8Bitdo Lite Bluetooth Gamepad comes at a reasonable price. It actually costs less than a stock Nintendo Switch Lite controller, which is quite the accomplishment. If you’re looking for a handheld controller that gets the job done and takes a beating while it’s at it, this is a great option. And all at a reasonable price!