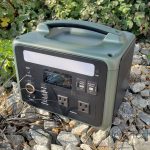 If you’re like most people, you use it for everything from banking to navigation. So when it runs out of power, you don’t just miss out on calls and texts. It can become difficult to perform ordinary, everyday tasks.

Thankfully, battery technology has come a long way in recent years. Power stations with built-in batteries used to be big and clunky. But modern portable power stations are more capable than you’d expect. Choose the right one, and you’ll be able to easily power your phone, laptop, and other devices.

We’re about to review the Ampace P600. This is a compact power station that’s designed to come with you on your travels. It can deliver up to 1,800 watts, with multiple safety protections. But is it the right choice for you? To find out, we’re going to have to take a much closer look. Let’s dig in, and see what we find! 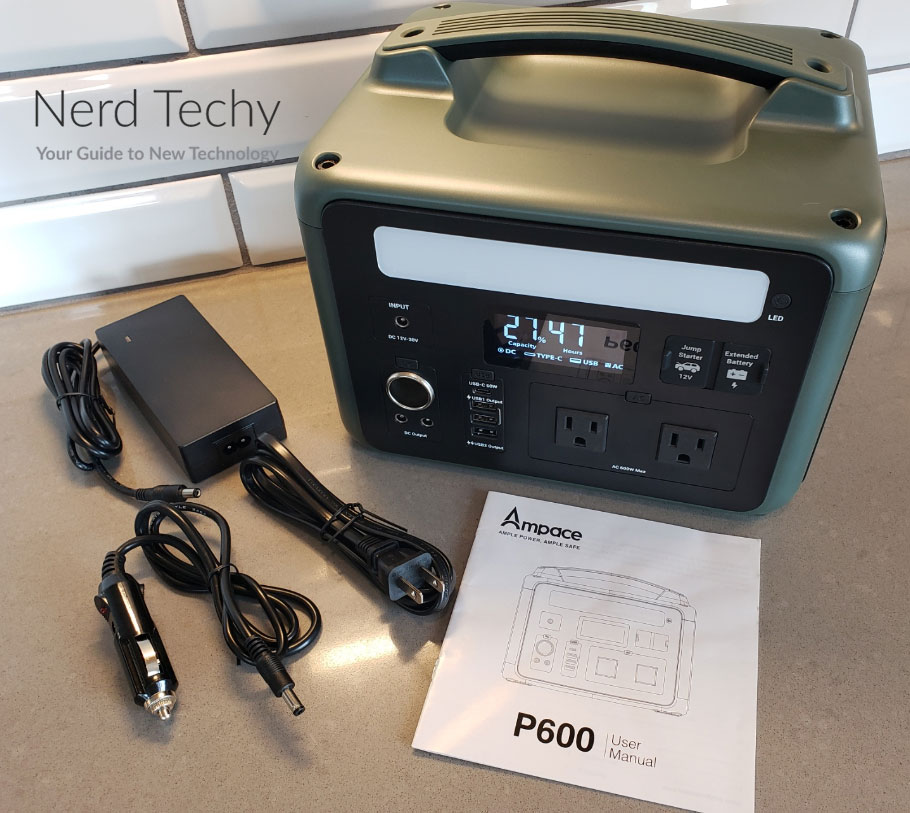 The Ampace P600 Portable Power Station has a rectangular housing. It measures a little over eight inches per side and ten inches tall. The edges are rounded off for both durability and safety.

You can order it in three different colors. It comes in green or slate grey, with black panels on the front, back, and sides. Alternatively, you can order a chromed finish with brown panels. This is purely a cosmetic decision, but it’s always good to have options. 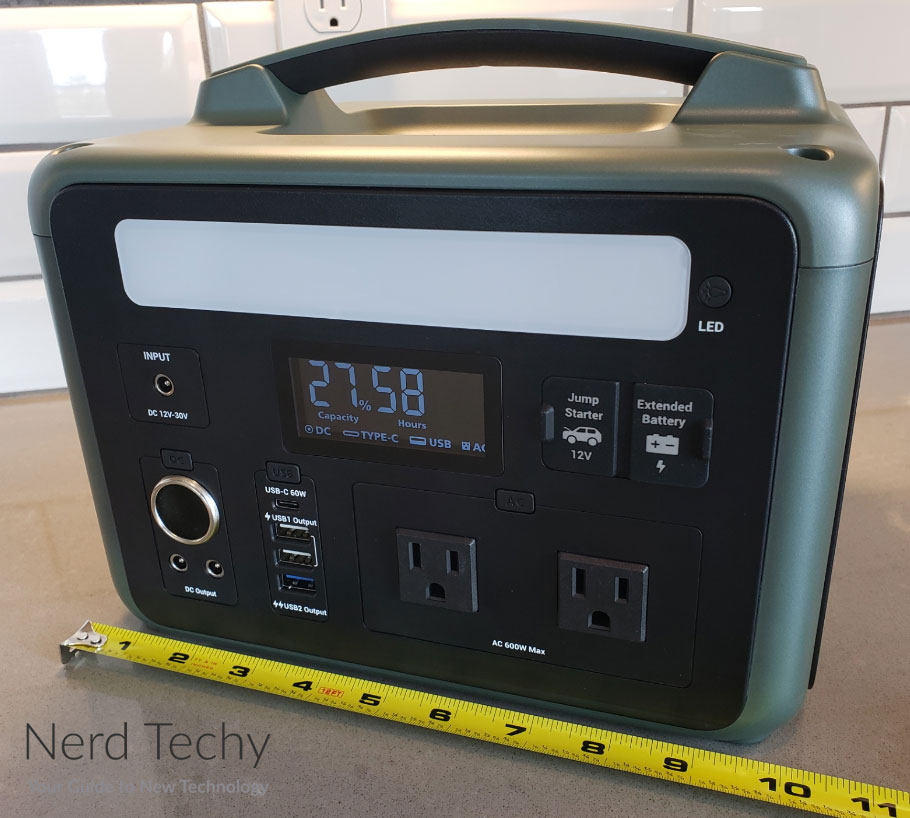 The power station weighs 17.6 pounds, which is heavy for the size but light as power stations go. It sports a molded handle that’s almost as wide as the top of the unit. As a result, it’s easy to carry with you. You can take it camping, or use it around the house during a power outage. 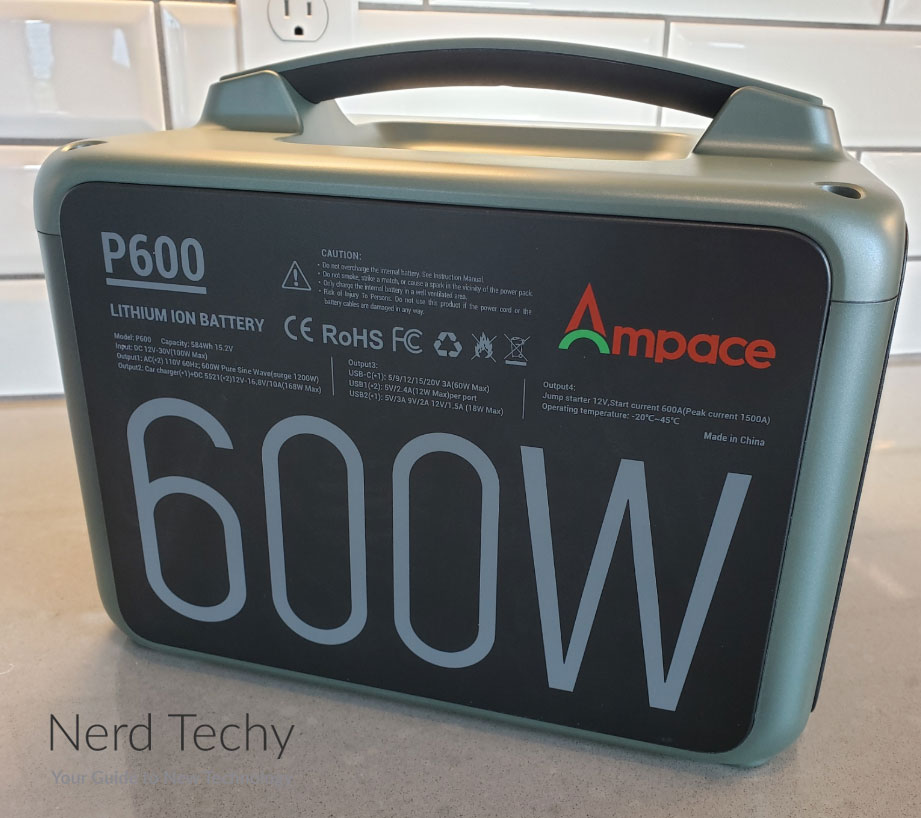 The sides of the housing are vented, with a pattern of diamond perforations across the surface. These vents allow air to flow through the power station and keep the internal components cool. A set of fans ramp up when the circuits are under load to compensate for the added heat. They’re audible, but the sound level is reasonably low. It’s just a soft whir that won’t even bother you when you’re sleeping. 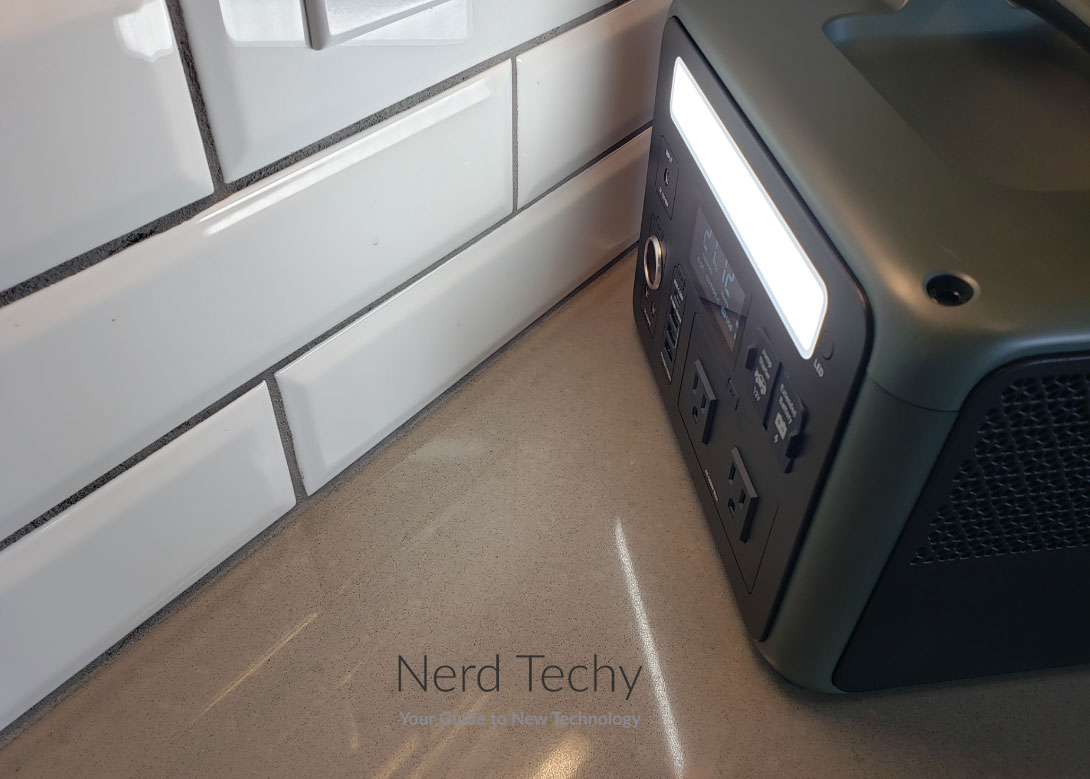 Across the top of the front of the housing, you’ll notice a broad LED light bar. It draws 12 watts, and can be very bright on its highest setting. To the right is a little black button for controlling it. Press it to turn the light on or off, or cycle through low, medium, high-powered, strobe, and SOS modes. The dimmest mode is great for tents, and the brightest can light up a wide area.

If you want something a little more straightforward, consider the BougeRV 1100Wh Portable Power Station. It’s tiny and chunky, with reinforced corners and edges. It also provides pure sine wave power with a 2,000-watt surge rating. On the other hand, it’s a little bit pricey.

In the center of the P600’s front panel is a rectangular LCD display. It’s a bright blue on a black background, and shows the power station’s current vital statistics.

At the left, you’ll see the current battery level, written as a percentage. In the middle, the display shows the estimated running time remaining. This will be based on your current rate of usage, and will change when you plug or unplug devices. At the right of the display, you’ll see how much wattage you’re drawing. And along the bottom, symbols will light up to indicate which ports are in active use. 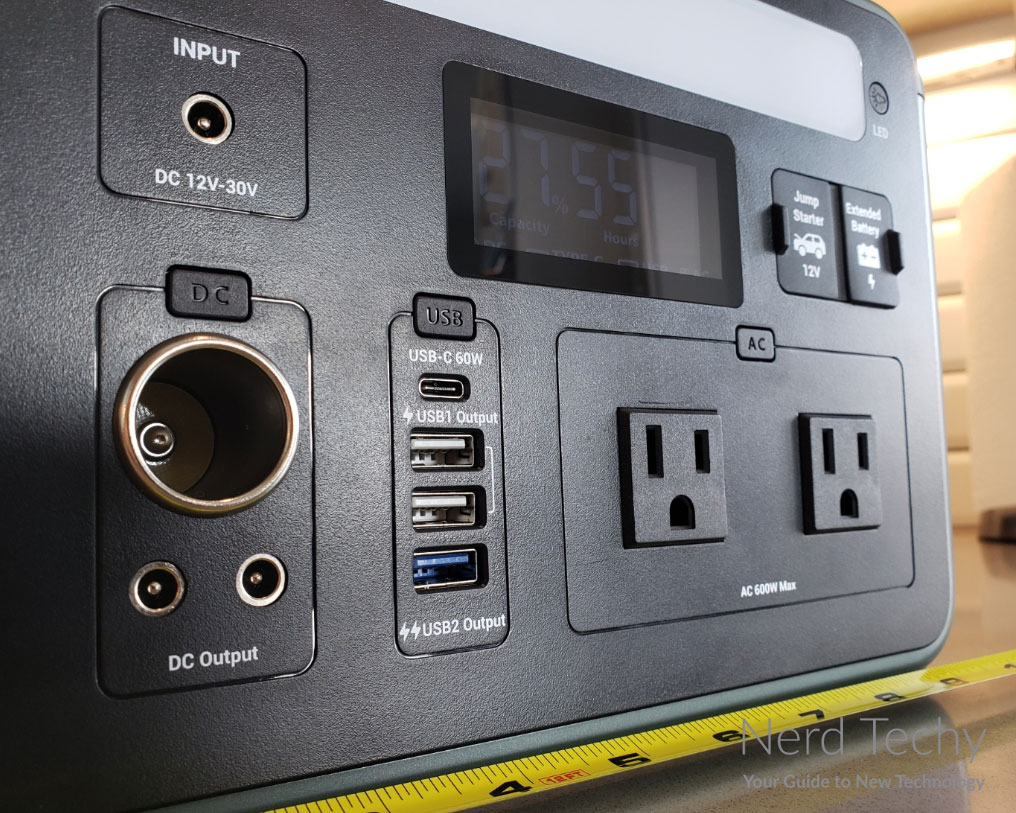 The input and output ports are all located on the front of the housing, which makes them easy to find. At the left of the display is a single barrel-style DC input. You’ll use this port for charging the internal battery, regardless of what charging method you use.

At the bottom left, you’ll find your DC power outlets. There’s a single automotive-style outlet, which provides a standard 12-volt current. Beneath that, you’ll find a pair of barrel-style 12-16.8-volt outlets. Above the automotive port, there’s a black control button that turns the group of DC ports on and off.

To the right of the DC outlets is a column of USB ports. At the top is a USB Type-C port. Beneath that is a pair of USB1 ports with white tabs. At the bottom is a single USB2 port, with a distinctive blue tab. All of the tabs are high-visibility, so it’s easy to orient your USB plugs. As with the DC outlets, there’s a control button at the top to turn the USB ports on and off.

At the right is a pair of AC power outlets. They’re three-prong outlets, so you can plug in your grounded devices, and the main prongs are polarized. A third black button controls these outlets.

The Ampace P600 has a battery capacity of 584 Watt-hours. That’s enough energy to charge the average smartphone more than 40 times. Depending on your laptop, you’ll get anywhere from five to 10 charges. You can run a 1,000-watt griddle for a little over half an hour. And if you’re operating a 40-watt CPAP machine, it will last for 12 ½ hours. That’s more than enough to get you through the night.

When it comes time to charge the battery, you’ll have a few different options. The simplest is to use the AC adapter, which is included in the package. When you’re plugged into wall power, it will fully charge in around six to seven hours. This was honestly disappointing. With modern charging technology, you could easily charge this kind of battery in half the time. 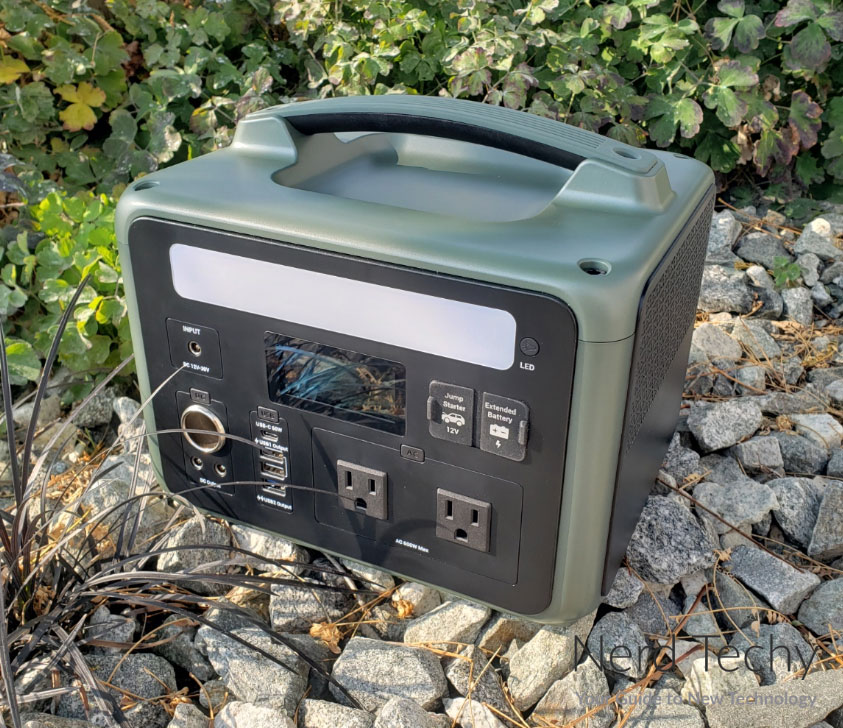 Alternatively, you can charge from your car’s DC power outlet. The kit includes a car charging cable, with a standard 12-volt automotive tip. Using car charging will be a bit slower than using the wall charger, but it’s very convenient when you’re on the road.

If that’s not enough, you can also charge the battery using a solar panel or gas generator. You’ll need an adapter to make this work, but it’s not too complicated. Unfortunately, you’ll still be limited to the same 90 watts you’d get from the AC charger. Even if you have several solar panels, you’ll have to deal with that bottleneck.

The battery is rated for 1,000 charge and discharge cycles. This means that it will still retain 70% of its original maximum capacity. 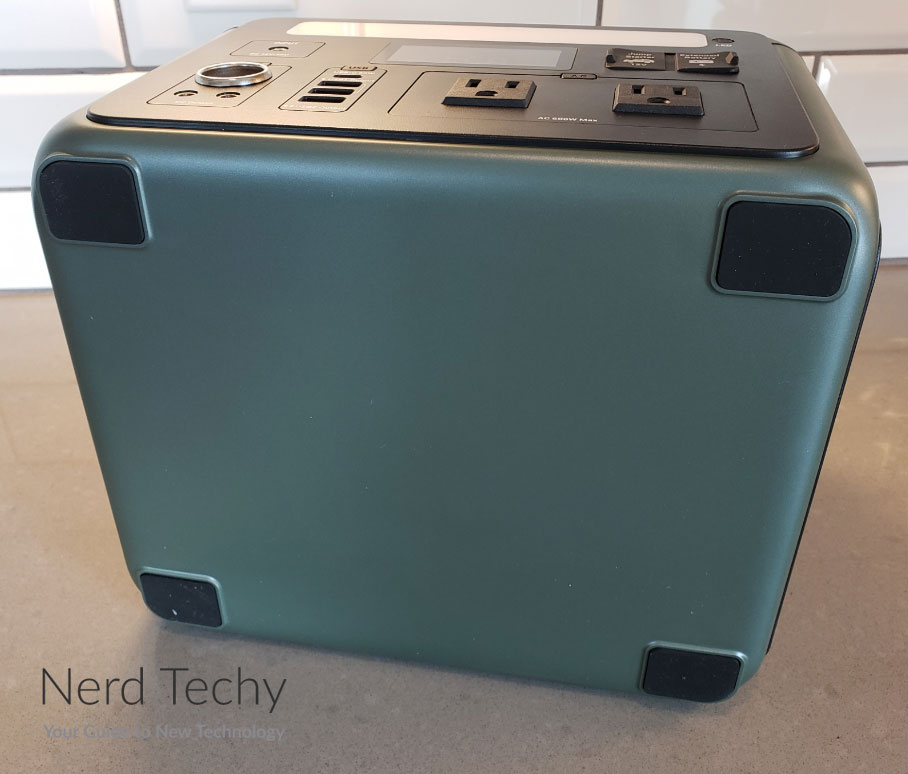 The Ampace P600 Portable Power Station can deliver a maximum of 600 watts on a continuous basis. However, it’s also capable of delivering 1,800 watts on a temporary basis. For example, it’s not going to quit on you if you plug in a powered cooler and the compressor kicks in. Keep in mind that this is the limit for the power station as a whole. If you’re drawing 600 watts from one of the AC outlets, you won’t be able to use any of the other outlets. 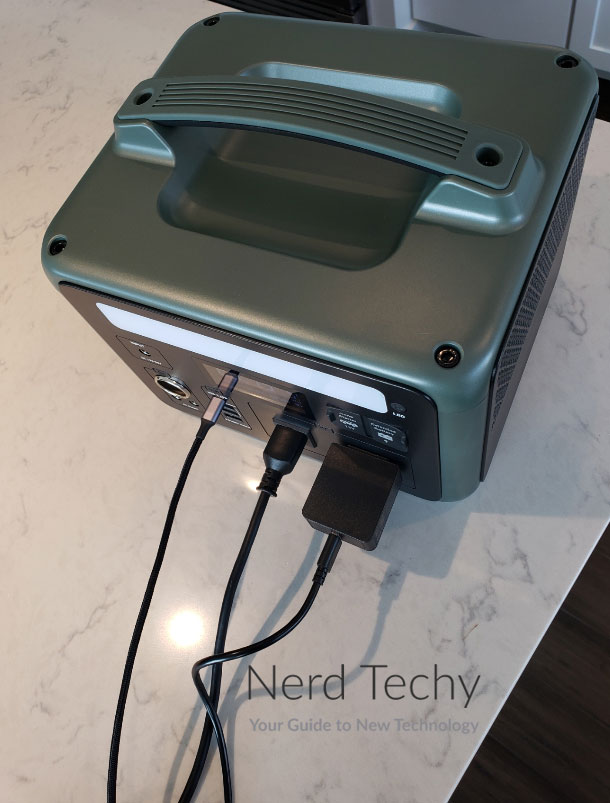 The USB Type-C port is a PD port, capable of delivering up to 60 watts. That’s enough to fast charge any smartphone, as well as charge almost any laptop. Unless you have a large laptop like the MacBook Pro 16”, you’ll be able to use it while you’re charging it. 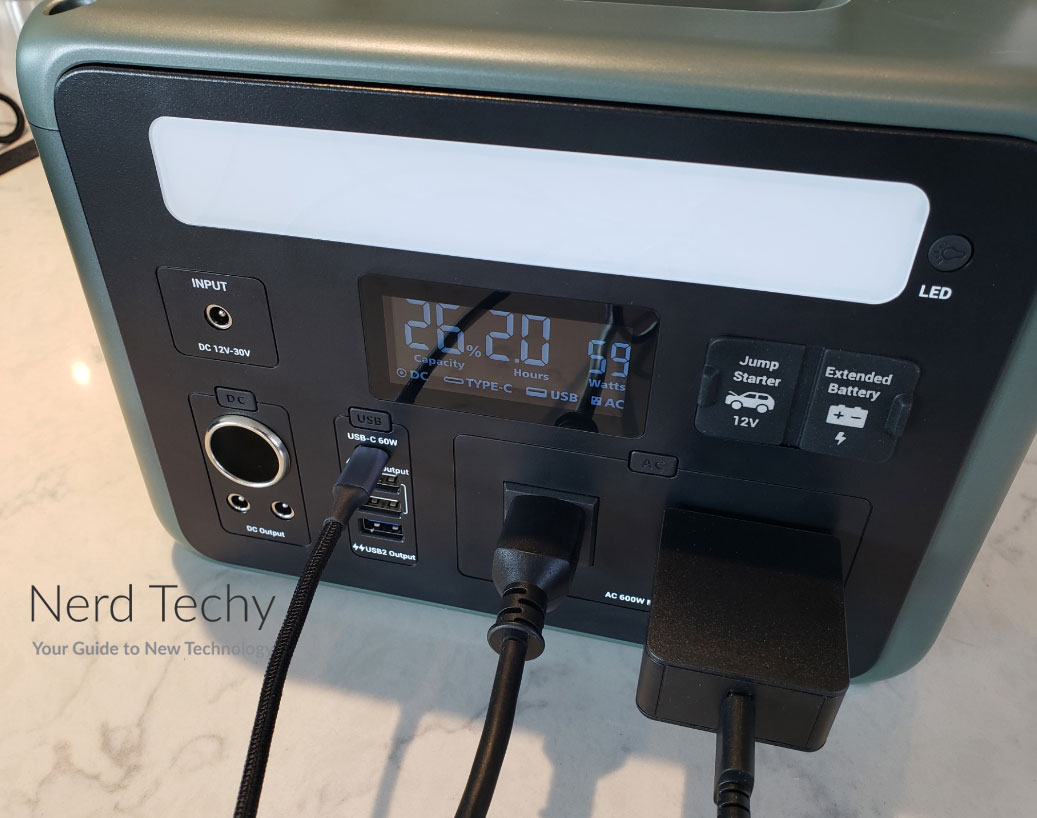 The two USB1 ports, the ones with the white tabs, provide a standard 12-watt current. You’ll be able to charge phones, tablets, or other devices. You just won’t be able to fast charge them. The bottom USB port with the blue tab is a little more robust. It’s a QC charger, capable of delivering 18 watts. With a compatible smartphone, it will shave 50% off of your charging time.

If you want even more power, check out the Growatt Infinity 1500. It can deliver 2,000 watts of power, with an impressive 1,512 Watt-hour capacity. It can also charge up to 12 devices at once, and sports a built-in wireless charging pad. Then again, it’s much heavier and more expensive. 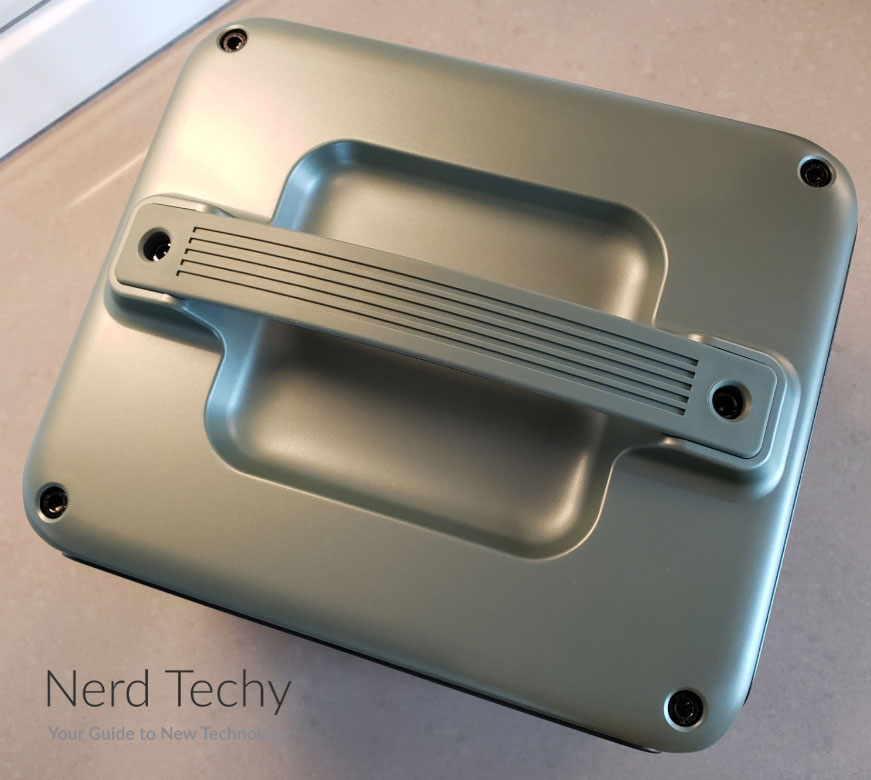 The P600 utilizes a pure sine wave inverter. Ordinary DC inverters produce a jagged waveform that can damage sensitive electronics like CPAP machines. With a pure sine wave, you get a smooth waveform that’s safe for these machines. That said, there’s no universal power supply (UPS) function. The power needs to be turned on manually, and won’t automatically kick in during a blackout.

If you need a power station that functions as a UPS, take a look at the LemiPower 1536Wh LiFePO4 Power Station. It can supply up to 15 minutes at once, and it boasts an impressive battery capacity. On the downside, it doesn’t start shipping until November.

The internal circuitry contains a number of safety features to keep you and your devices safe. To begin with, it has short-circuit protection to keep you safe in the event of a damaged wire. Over-current, overload, and over-current protections keep your phone and other batteries from burning out. And a built-in thermostat shuts down the charging process if it starts to get too hot.

Besides charging your devices, the P600 can also be used as a jump starter. There’s a set of jumper cables in the package, and they plug into a covered port on the front. The battery provides enough current to jump an 8-liter gas engine or a 6-liter diesel. That includes pretty much anything you’re likely to take on the road. 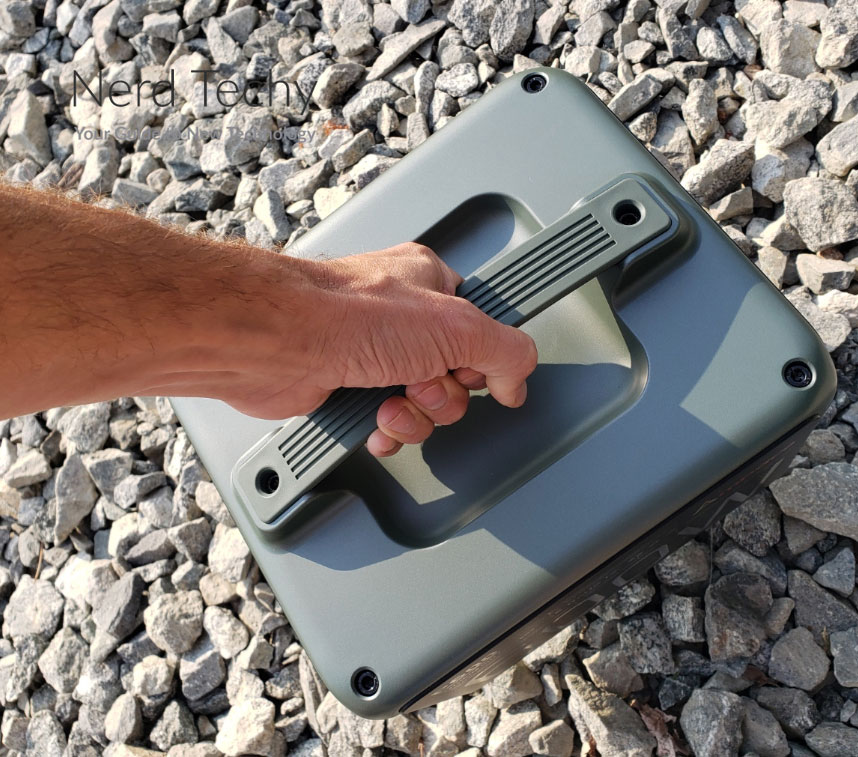 The Ampace P600 Portable Power Station is a highly capable little charger. It can power up to 12 devices at once, including two AC outlets. The USB ports are highly capable, with 60-watt PD charging and 18-watt QC charging.

The design itself is well thought-out, with a compact form factor and a wide, ergonomic handle. The LCD display provides plenty of insight into the system’s status. We would have liked to be able to charge a bit faster, but that’s our only real complaint.