Not long ago, going off-grid meant going completely without power. You might have had a gas generator you could turn on for emergencies. But this is inconvenient at best. With a gas generator, you have to haul fuel out to wherever your off-grid location is. As a result, there’s a practical limit to how much fuel you can supply. For most people, you can’t run an off-grid gas generator 24/7.

But solar power has changed that. Set up enough solar panels, and you can power pretty much anything. Sunlight is free, and you don’t have to mess around with fuel delivery. In most places, a solar array will let you run your electronics 24/7. That said, solar power has an obvious drawback. It only works as long as the sun is shining. So, what are you supposed to do at night?

When you set up an off-grid solar array, it’s essential to install a set of deep cycle batteries. These batteries will slowly charge during the daytime while there’s excess solar power. At night, your power system will seamlessly switch over to battery power. If you’re in the kitchen cooking, you won’t even notice the change-over.

While standard residential power delivers 120 volts, solar backup batteries deliver 12 volts. There are a couple of reasons for that. To begin with, 12-volt batteries have multiple applications.

We’re about to review three of the best 12V 300Ah LiFePO4 Lithium Batteries we could find. All of these batteries have a substantial amount of capacity, and can be wired in series and parallel. They’re also very durable, with the ability to withstand thousands of charge and discharge cycles.

Of course, we’ll need to take a closer look at each one. How are they designed, and how can you install them? What kind of warranty do you get, and how many duty cycles can you expect? We’ll also have to think about how many batteries can be wired together, and any relevant safety features. After that, we’ll have a much clearer picture. Let’s take a closer look, and see what we find! 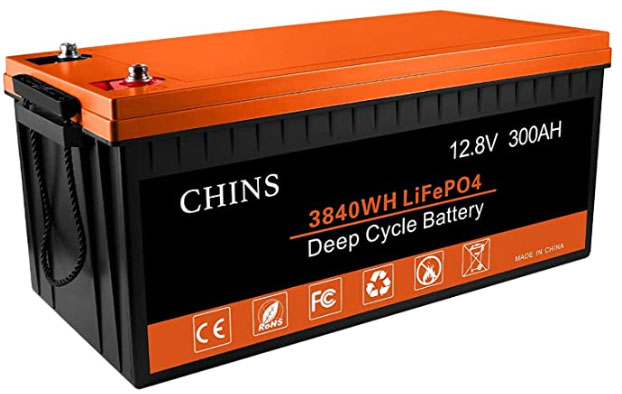 The CHINS LiFePO4 Battery 12V 300Ah Lithium Battery is a big, beefy boy. It measures 20.47 inches wide, 10.59 inches thick, and 8.66 inches tall. At 68 pounds, it’s the heaviest battery of the bunch. However, there’s a pair of nylon rope handles that make it easy to carry. Besides which, it’s not like you’ll be hauling the battery around after it’s installed.

The housing is made from a durable plastic. This material is very rugged, and will last for well over a decade without warping or cracking. The main part of the housing is black, with some labeling and basic information printed on it. The upper portion is bright orange, with a smooth surface where water won’t pool up. 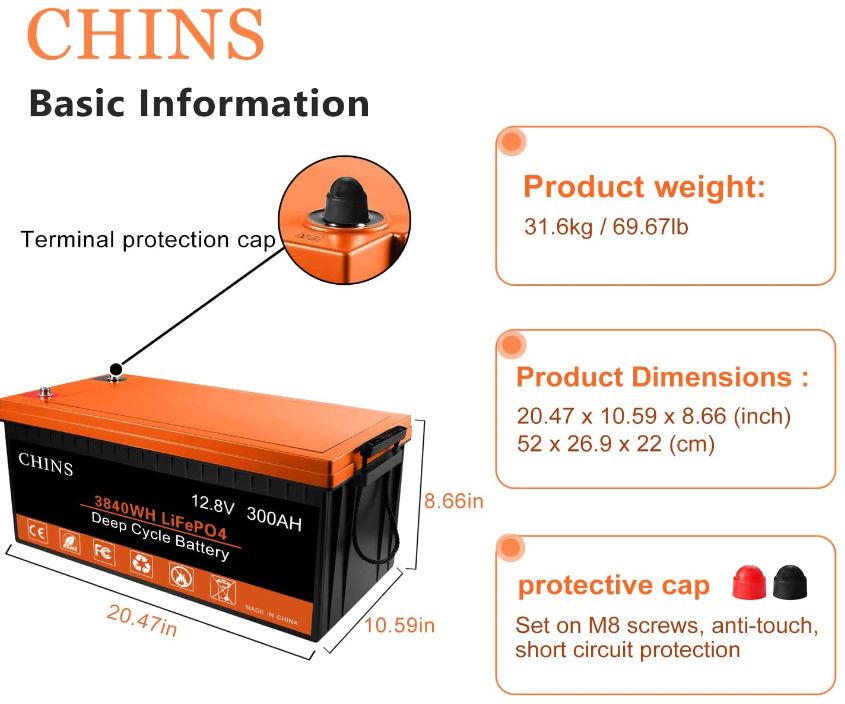 Speaking of water, this battery has a weather-resistance rating of IP65. It’s not marine-rated, nor can it be submerged. But if it’s sitting out in the rain, it’s not going to get damaged. Incidentally, it’s also impervious to dust, so you don’t have to worry about installing it in a dry environment.

The terminals are located at the left end of the lid. They’re simple M8 threaded rods, 16mm in length, compatible with most 12-volt wiring. You get a set of nuts to hold your contacts in place, along with red and black protective plastic caps.

The CHINS battery is rated to last for a minimum of 2,000 duty cycles. This means it can be fully charged and discharged 2,000 times, and retain 80% of its original capacity. This is backed by a three-year manufacturer’s warranty. Beyond that, CHINS will continue to provide free customer support for an additional seven years. 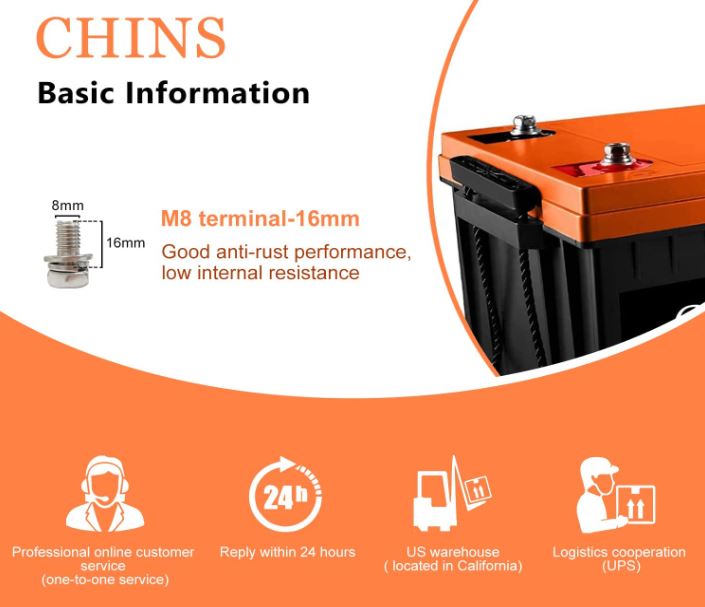 This battery is rated to deliver 12.8 volts of power. That’s a bit more than 12 volts, but it’s good to have a little bit extra on a brand new battery. In total, the terminals can deliver up to 200 amps of continuous current. To put that in perspective, a standard residential outlet is wired for 15 amps. Even if your off-grid cabin is wired for 20 amps, you’ll be able to power 10 outlets.

You’ll also get 600 amps of surge power. This can last for five seconds before the internal safety system limits the current. Surge power is essential if you’re running a compressor-driven device like a fridge or an air conditioner.

Charging the battery is easy. It will charge in as little as six hours, assuming you’re charging at the maximum speed. That said, the maximum charge rate of 60 amps is fairly powerful. You’ll need several small 12-volt solar panels – or a few larger ones – to charge at top speed.

Each CHINS battery has a built-in battery management system (BMS). This system provides several protections to keep your battery and electronics safe. It will automatically shut down if the BMS detects over-current, over-discharge, or a short circuit. It will also stop running if the temperature gets higher than 122 degrees Fahrenheit. 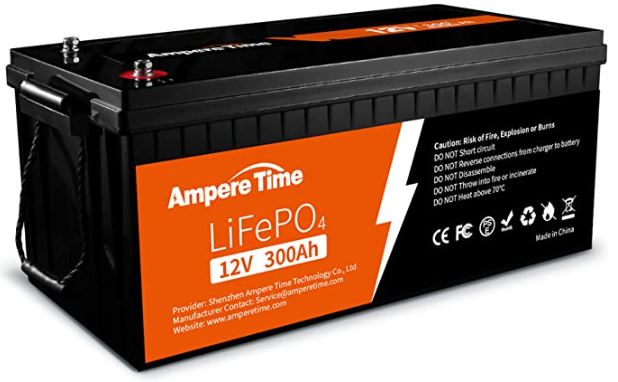 The Ampere Time 12V 300Ah Lithium LiFePO4 Battery is slightly smaller and lighter. It measures 20 inches wide, 9.37 inches deep, and 8.54 inches tall, and weighs 62.83 pounds. The housing is all black, with a bright orange label on the front. It’s rated IP65 for weather-resistance, so you don’t have to worry about it getting wet.

The terminals are located at the left end of the top of the housing. They’re M8 threaded, but there aren’t any posts. Instead, the terminal “post” is a Phillips-head screw, and screws into a socket on the battery. In practice, it makes no difference; you can install the same kinds of devices either way. 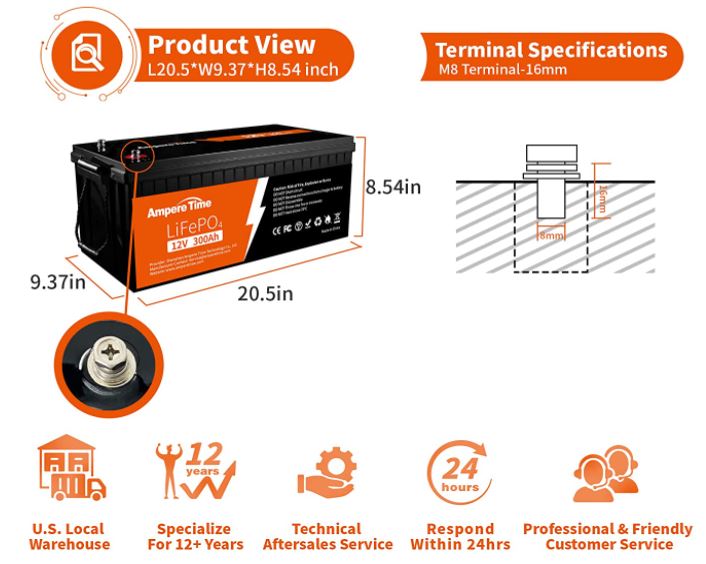 This battery is rated for 4,000 duty cycles, which is pretty impressive. Ampere backs that with a robust five-year warranty. If there are defects in materials or labor, you’ll be covered.

As you can see, a 300Ah battery is guaranteed to be big and heavy. What if you want something you can carry in one hand? In that case, check out our list of the best 12V 100Ah LiFePO4 batteries. They can do most of the same things, but they have one third of the capacity, so they’re more compact. 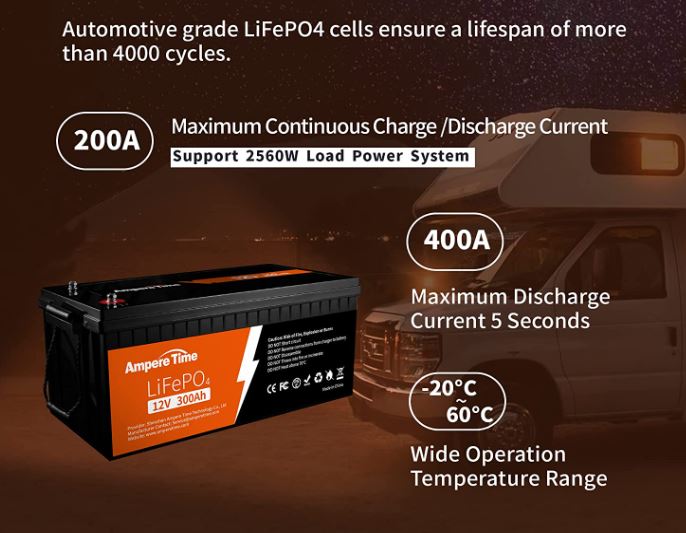 The Ampere Time 12V battery actually delivers 12.8 volts, much like CHINS battery. It also has the same rated capacity of 300Ah. The maximum continuous current is 200 amps, with a surge rating of 400 amps. The surge period is limited to five seconds. Charging is easy with any compatible charger, and you can deliver up to 60 amps. At this rate, the battery will fully charge in six hours. 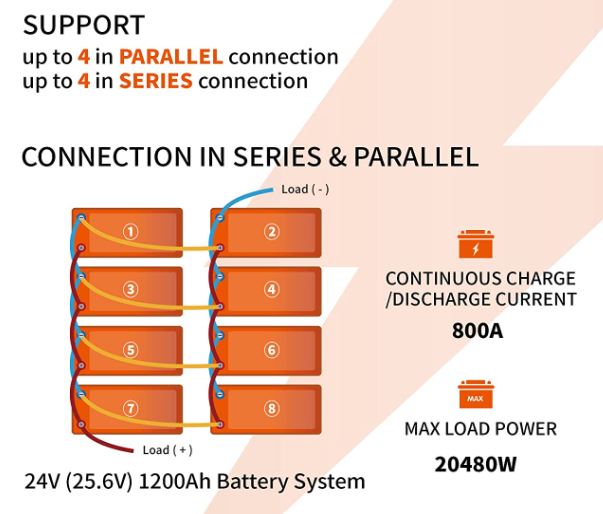 This is an unusual limitation. If you want a more versatile battery, consider the Power Queen 300Ah LiFePO4 Battery. It has a similar capacity and capabilities, but you can wire four in series and parallel simultaneously. This will deliver maximum capacity as well as maximum voltage.

The Ampere Time battery has a BMS system to protect your electrical system from damage. You don’t have to worry about overcharging, over-discharging, over-current, or short circuits. 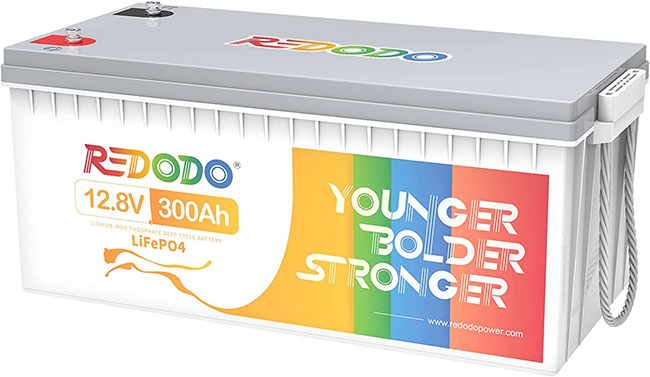 Redodo is a well-known battery manufacturer we’ve looked at in the past. We recently reviewed the Redodo 12V 100Ah LiFePO4 Battery. It’s similar in many ways to the one we’re about to review, but smaller, with one third of the capacity.

The Redodo 12.8V 300Ah LiFePO4 Battery might be bigger than its smaller cousin. But it’s the lightest of today’s offerings, tipping the scales at only 58 pounds. That’s still a bit heavy, but don’t worry. There’s a pair of nylon carrying handles built into the sides of the housing. 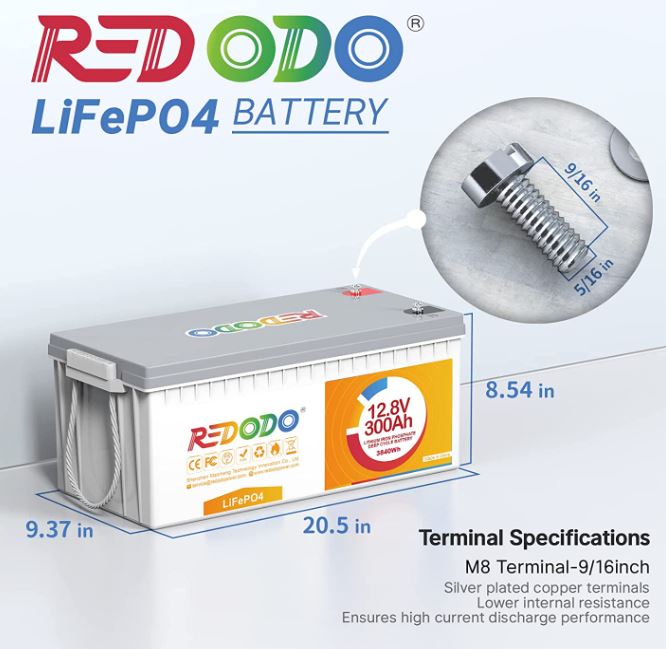 The main body of the battery housing is bright white, with ridges near the top for extra strength. There’s a bright, rainbow-colored label on the front, with lots of Redodo branding. The top panel is grey in color, with yet more rainbow branding in the center. At the left side, you’ll find the two terminals. These are similar to the terminals on the Ampere Time battery, since they’re removable screws. They have a standard M8 threading, and are 16mm in length.

This battery is rated for a minimum of 4,000 cycles. This is backed by Redodo’s 5-year manufacturer’s warranty. Better than that, you get lifetime technical support. If you’re having trouble wiring up your battery, you can get an expert to walk you through it. 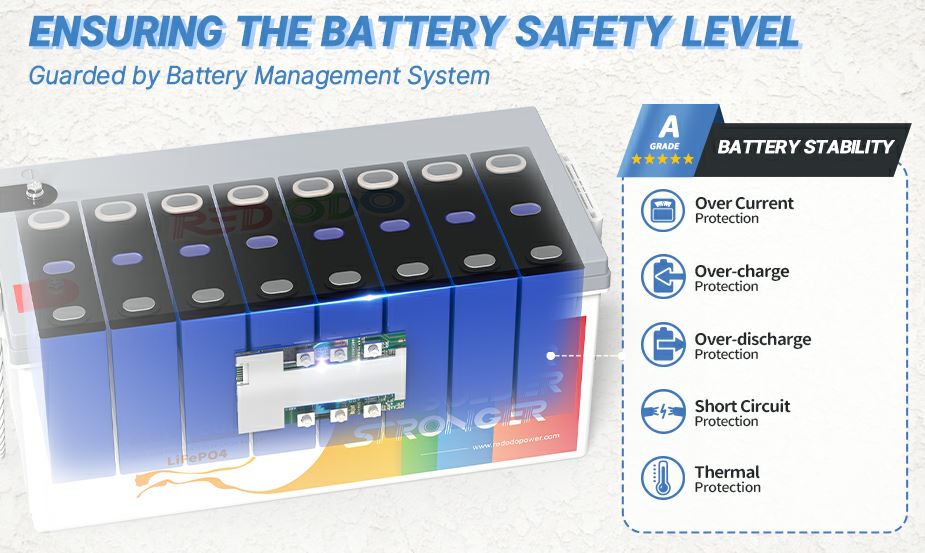 As with the previous batteries, this one has a maximum capacity of 300Ah, or 3,840 Watt-hours. It delivers a 200-amp maximum current, with up to 400 amps of surge power. So far, so good. However, you can also charge it in as little as five hours with a 60-amp charger. This increase in charging efficiency can be a huge help on cloudy days.

You can wire up to four Redodo batteries in series and four in parallel, for a total of 16. This will provide 1,200Ah of capacity and 51.2 volts of current. All of this is regulated by a BMS, which ensures your system’s safety.

All three of these batteries will work very well with most solar systems. But which one is the best one for your needs? Here’s what we’ve learned today.

We started with the CHINS LiFePO4 Battery 12V 300Ah Lithium Battery, the biggest and heaviest of the bunch. It can be wired with four in parallel and four in series, for quadruple the capacity and voltage. It also has a 2,000-cycle duty rating, along with a three-year manufacturer’s warranty and lifetime support. And with up to 600 amps of surge power, it’s perfect for compressor-driven devices.

We next looked at the Ampere Time 12V 300Ah Lithium LiFePO4 Battery. This battery is somewhat lighter and smaller, and falls in the middle in terms of size. It has double the duty cycle rating of the CHINS battery, which is a big plus. On the downside, it has a lower, 400-amp surge power rating, and you can only wire eight batteries together.

Last, we reviewed the Redodo 12.8V 300Ah LiFePO4 Battery. The 4,000-cycle rating is great, but the free lifetime support is even better. You can wire up to 16 together in total, and the 400 amps of surge power is respectable. If you’re not trying to max out your surge power, this is an excellent choice.