TechGuru May 6, 2021 Gaming, Nintendo No Comments

The Nintendo Switch has not gotten nearly as much fanfare as its compatriots, the PlayStation 5 and Xbox Series X/S. In fact, when journalists discuss the so-called “console wars,” Nintendo is often left out of the conversation altogether. This isn’t necessarily a bad thing. Perhaps it’s an acknowledgement that Nintendo’s systems are fundamentally different from other consoles.

Consider the latest Xbox and PlayStation. Yes, they each have their own benefits and drawbacks, but they both play the same types of games. And except for some differences in shape, they may as well have the same controller. Unless you’re in the top one percent of hardcore gamers, there’s no reason to own both systems. Conversely, the Nintendo Switch has an innovative control scheme, and a number of fun split-screen games. It also allows you to “switch” between a handheld console and a traditional one. So it makes perfect sense why someone would want to own a Switch along with their other console.

We’ve reviewed a number of Switch accessories in the past, such as wall mounts. Now, we’ll try our hand at something a little more mundane: replacement wall chargers. This part might not be exciting, but without one, you’re dead in the water. We’ll start by looking at the YCCSKY Switch Charger. This is a no-nonsense USB Type-C charger with a five-foot cord. Next, we’ll review the Santala Switch Charger. This is a quirky charging block with Type-A and Type-C ports, along with an HDMI port for video pass-through. Finally, we’ll examine the INNO Switch Charger. This is a basic, budget-priced adapter with a 6.5-foot cord. Which one is the best? Let’s take a closer look, and see how they stack up!

Before we start, let’s talk about the power requirements of the Nintendo Switch. Let’s start with the good news. Unlike today’s other consoles, the Switch doesn’t require a custom power adapter. Instead, it uses an ordinary USB Type-C tip for charging. This means it’s usable with a wide variety of third-party power supplies. By comparison, if your Xbox or PlayStation adapter breaks, you have to buy one from the manufacturer. However, it’s still important to understand the Switch’s power systems. 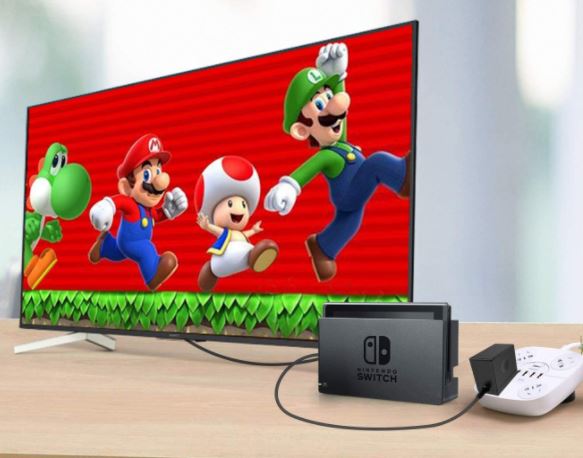 The Nintendo Switch originally shipped with a 3.7-volt, 3,600mAh battery. About 25 percent beefier than an iPhone battery, it could last for about 2 ½ to 6 ½ hours. The wide range of times is due to the wide variety of games, and other settings such as screen brightness. In August, 2019, Nintendo upgraded the Switch to a newer, 4,310mAh battery. This variant can last up to nine hours, and takes about three hours to charge under ideal circumstances.

So, what are ideal circumstances? It depends on whether your Switch is docked or undocked. In undocked mode, you only have to worry about supplying power to the Switch console. The standard Switch adapter will provide 18 watts of power in this mode. However, not all of that power is necessary. The Switch normally draws around 10 watts, and uses the rest of the power to charge. In theory, a 12 watt charger will get the job done. That said, an 18 watt charger will charge the Switch as fast as possible, saving you time.

An 18-watt adapter will be all you ever want or need for handheld use. But if you want to play in docked mode, you’re going to need more power. The dock requires 39 watts for operation. 18 of these are used for the Switch itself, while the rest are used for the dock’s other USB ports and for upscaling. Unlike with handheld mode, you cannot get away with a weaker power supply. If you’re putting out less than 39 watts, your dock won’t work properly. 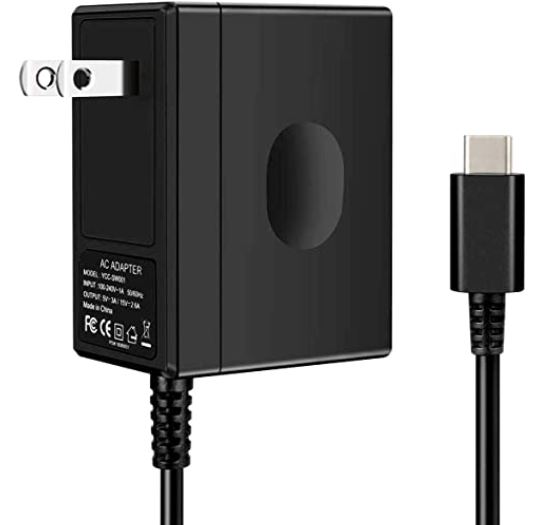 The YCCSKY Switch Charger is a vanilla-looking power adapter, with an all-black shell. The adapter itself measures 2.55 inches in height, 1.92 inches in thickness, and 1.33 inches in width. Keep in mind that, at this size, it can block the bottom half of a duplex outlet if it’s plugged into the top. It can also block two outlets in most power strips, unless the outlets are rotated 90 degrees. The cord is 59 inches in length, or just under five feet. This is about a foot shorter than the stock Switch power supply, but should be long enough for most people. The cord is reinforced at both ends, so if you do accidentally give it a tug, it’s not likely to get damaged. 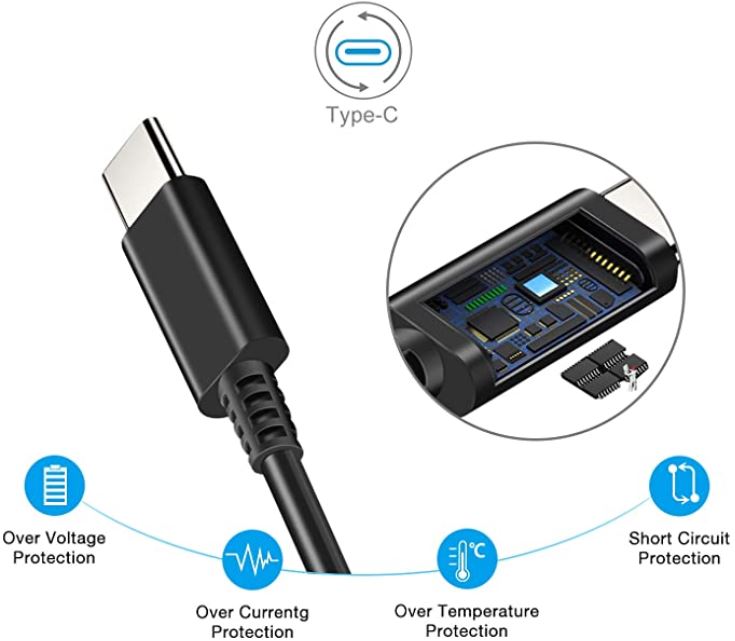 One unique feature we appreciated was the case’s dimpled sides. These make it easy to plug and unplug with one hand, without needing to wiggle it out of your outlet. It’s a small feature, but sometimes the small features can be the most important. 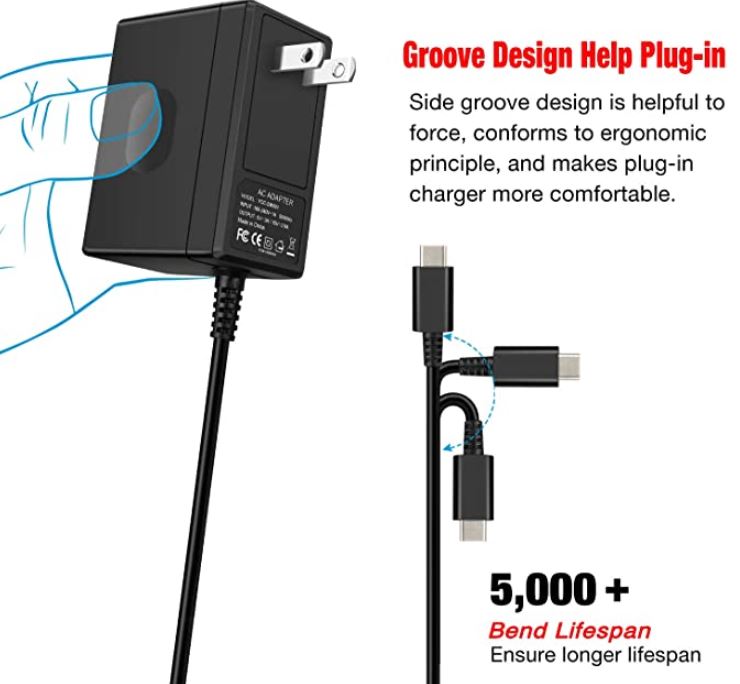 The YCCSKY charger provides two different charging rates, depending on how it’s in use. When used in handheld mode, it will provide 15 watts, slightly less than the maximum. Still, it’s enough to play and charge at a reasonable pace. When plugged into the Switch dock, the charger will step up and provide 39 watts. This is enough to power the dock, charge the Switch, and even supply any other devices that are connected. For docked use, it’s just as powerful as the stock Switch charger.

A set of internal electrical sensors monitor both the charging adapter and the Switch battery. Together, they protect you from overcurrent, overvoltage, and overcharging. The temperature sensor will also shut the charger off if the circuitry gets too hot. These are all great safety features, but you can do even more to protect your Switch. If you travel regularly, a waterproof case can be a great way to keep your hardware safe. 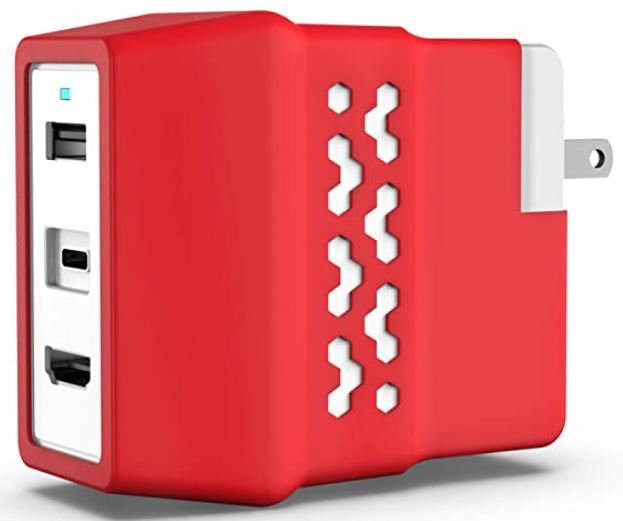 The Santala Switch Charger is certainly the most unique of today’s offerings. First off, it has a quirky red aesthetic that makes it look as fun as the games you’re playing. Secondly, it has not one, but three charging ports, along with the necessary cables. The overall size of the charger is two inches in height, 2.3 in thickness, and less than half an inch in width. As with the YCCSKY, it will block the bottom of a duplex outlet, so plan your placement accordingly. 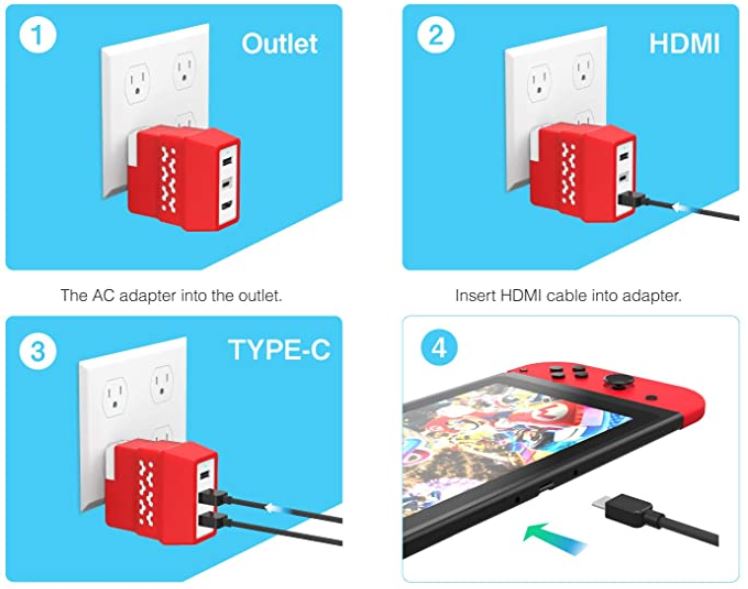 The top port is a USB Type-A port, for charging smartphones and other devices. The middle is a Type-C port, for connecting to your Nintendo Switch. The bottom is an HDMI port, which allows for signal pass-through to a TV or other display. This makes it highly versatile, since it can be used to connect a bare Switch directly to a TV. This is a secondary function, though. If that’s all you want to do, consider a dedicated Nintendo Switch USB-C to HDMI adapter. 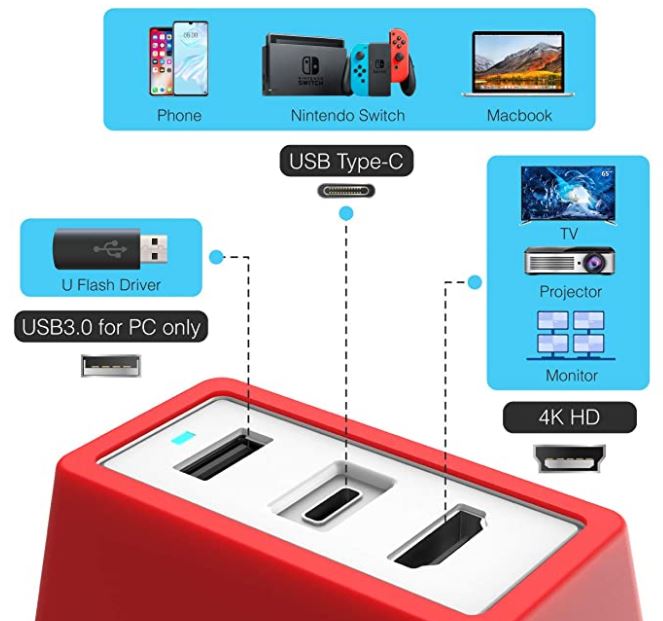 The USB Type-C port will deliver 40 watts, plenty for the Switch and a dock. In addition, the USB Type-A cable provides 4 watts (5V 0.8A) of charging power. This is a very low wattage, but it’s enough for basic charging needs if you’re not using your devices too much. Even so, consider it an extra, and not a primary feature.

The USB Type-C cable included in the kit is five feet in length. It can also carry a video signal as well as power. This means you can plug the Switch into the adapter, run an HDMI cable to your TV, and circumvent the dock. You wouldn’t want to do this at home, since the video won’t actually render in 1080p. Much better to use the dock in that situation. However, it’s useful when you want to plug into a hotel TV or one at your friend’s house. 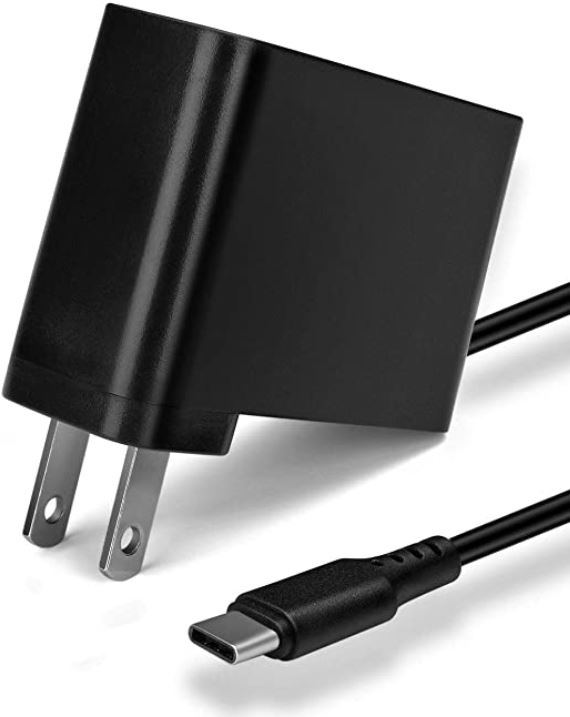 The INNO Switch Charger is a slim, black charger that doesn’t have a ton of extra features. It’s plain, it’s rectangular, and it comes with a 6.5-foot cable. This gives you plenty of length, and the material seems sturdy enough. That said, the cable reinforcement is weak, and is nearly nonexistent near the base of the charger. Be careful about twisting or yanking on the cord too much. 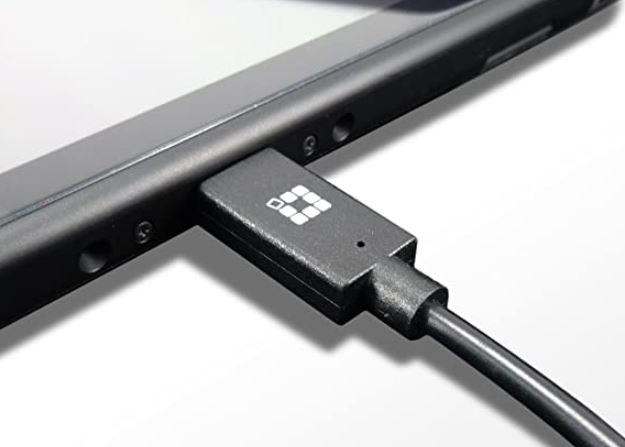 This charger delivers 12 watts of power, which is not enough to operate the Switch dock. However, it’s sufficient for powering your Switch in handheld mode. You won’t charge as quickly as you will with the original charger. But even so, you’ll be able to play and charge at the same time. The main advantage of the INNO charger is its price. At half the cost of most other offerings, it’s about as cheap as they come.

We should point out that “cheap” isn’t the same as “unsafe.” The INNO charger has a full array of overvoltage, short circuit, overcurrent, and temperature protections. If you need to buy a cheap charger, you can count on this one to work safely and as advertised.

Which one of these Nintendo Switch chargers is the best will depend largely on what you need. We started out by looking at the YCCSKY Switch Charger. If you’re looking for a one-for-one replacement, this is probably the best. It won’t deliver a full 18 watts during handheld use, but it will come close. More importantly, it delivers 39 watts to a docked Switch, and has a full array of safety features. If you want a reliable straight-up replacement, this is your best option.

The Santala Switch Charger is unique in that it allows you to use your Switch with your TV without a dock. This makes it ideal for anyone who spends a lot of time on the road. On the other hand, it costs more than the other adapters. If you’re just using for a Switch charger to use around the house, you’ll be overpaying.

The INNO Switch Charger is the most basic option, mostly because of its weak power delivery. At only 12 watts, it simply doesn’t deliver enough to power the Switch dock. This means it’s only suitable for handheld use. That said, the INNO adapter still has its place. If you want to leave your dock plugged in all the time, it makes a great travel charger.