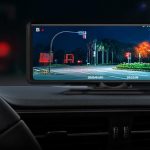 You may not realize it, but whenever you’re on the road, you’re vulnerable to scammers. These scammers can try to cheat you out of your money in any number of ways. For instance, someone will cut you off and slam on the brakes. Meanwhile, an accomplice will pretend to be a witness and tell the police you were driving recklessly. But a good dash cam can swing things in your favor. All of a sudden, you’ll have video proof that the scammer is lying.

A good dash cam can be used for other purposes, as well. For instance, with a big enough and bright enough display, you can use it to augment your eyes. On a foggy or rainy day, a powerful camera can sometimes produce a more detailed image than you can see. Similarly, a powerful night vision camera can see even further ahead than your headlights when you’re driving at night. That’s the conceit behind the BYTL Superfine Night Vision System. Yes, it’s a dash cam. But it’s a dash cam with such incredible night vision that BYTL calls it a “night vision system.”

This is a Kickstarter project that has already achieved more than five times its original goal. In part, this success is due to the fact that BYTL isn’t just some random Kickstarter company. They’ve been in business for nearly 20 years, and have over 30 patents under their belt. Like many established manufacturers, they’ve started using Kickstarter as a way to earn easy pre-sales. But just because they’re established doesn’t mean they have the Midas touch. To see if the Superfine Night Vision System is gold or merely fools gold, we’ll have to look under the hood. Thankfully, we got to take a peek. For everyone else, you’ll need to wait until early May, when mass production begins. Let’s begin! 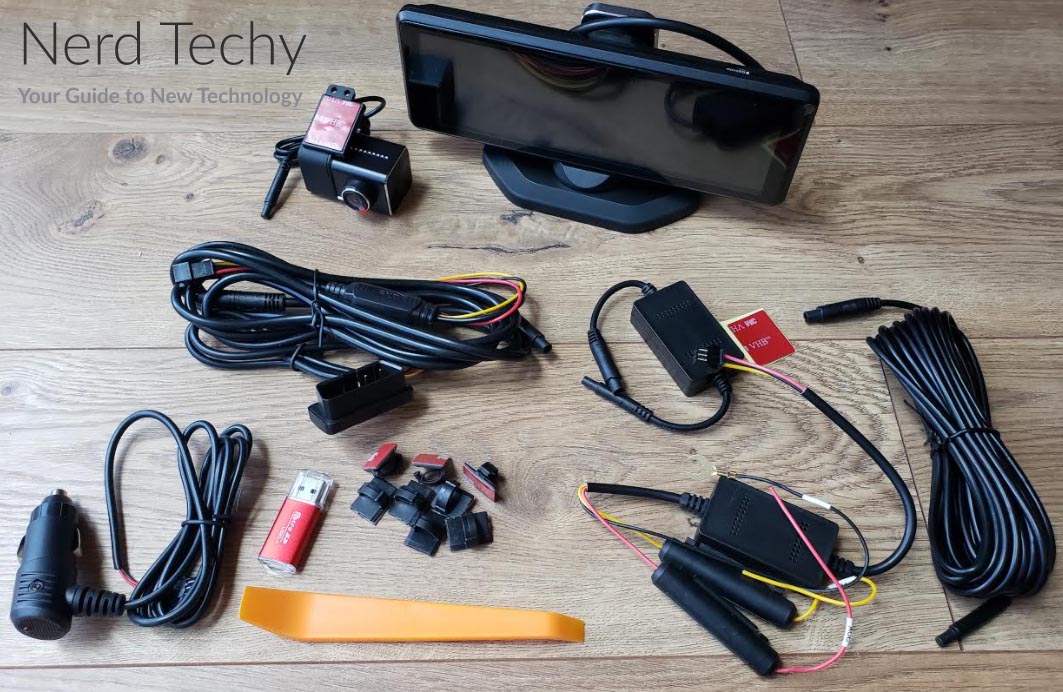 The BYTL Superfine Night Vision System is a two-part device, consisting of front and rear cameras. There are also wires and accessories, which we’ll dig into more in a little bit. The front camera is housed in the back of a wide, 8-inch IPS display. The IPS technology allows the display to be viewed from a wide angle, up to 178 degrees. However, the display is also attached to a 360-degree swivel mount. The mounting base is flexible, so it can attach to most dashboards. And because it swivels, the camera is easy to aim wherever you need it. The housing itself is constructed from glossy black plastic, which looks sharp and attractive. 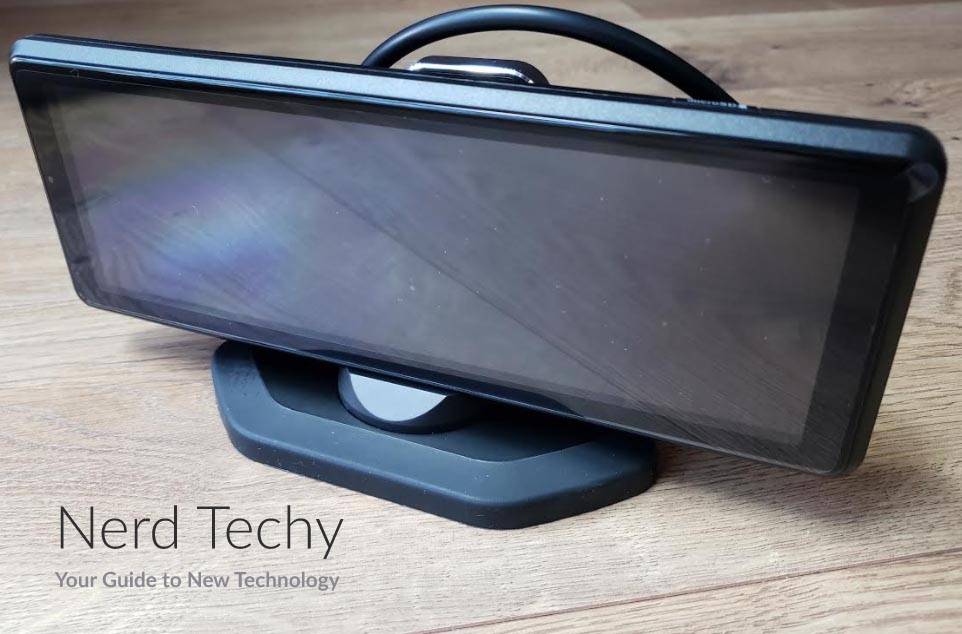 By default, the display will show you the view from the front camera. However, it can be tapped to show the rear camera, and tapped again to go into dual mode. This gives you the versatility to see both front and rear, or to see a larger view of one camera as needed. You can also use the display for reviewing footage, and for adjusting some of your settings.

As you can see, the front camera is a major fixture on your dashboard. By contrast, the rear camera is fairly small. It measures just over an inch on each side, with a small mounting bracket protruding from the top. This makes it easy to position on your rear window, without obscuring the view from your rearview mirror. It’s also covered by BYTL’s one-year manufacturer’s warranty and two-year customer service guarantee. You’re well-protected from any issues that may arise, and you can even get help with basic setup. 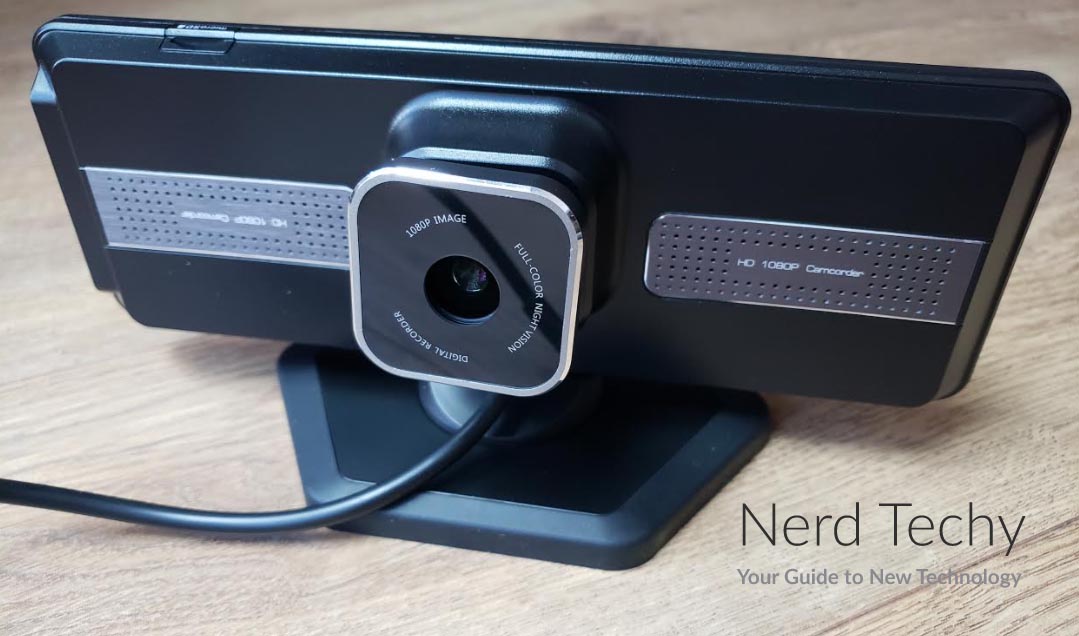 There are nearly as many dash cam designs as there are individual dash cams. One useful alternative is the Aukey DRS1. It records 4K video, and it utilizes a supercapacitor to start up reliably in cold weather. The main downside is that there’s no rear camera, so you’ll only be able to capture footage from the front.

Installing the BYTL Superfine Night Vision System is one of the easier dashcams we’ve ever installed. The front camera itself uses an adhesive mount. This is fairly standard. However, the flexible base is easy to attach to most dashboards. This is much better than a rigid stand, which can oftentimes turn out to have the wrong profile. And because the screen can be viewed from any angle, positioning is easy. Pivot the camera so the lens faces forward, and the rest will take care of itself. 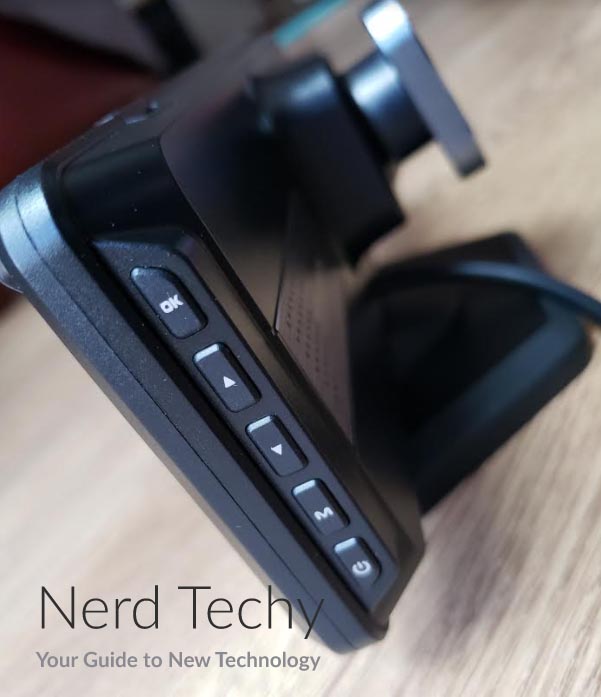 The rear camera mounts with an adhesive as well. It attaches to the inside of your rear window, a stark departure from most dual dashcam systems. This is the main reason it’s so easy to install. With most dual dash cams, the rear camera mounts by the license plate. This makes it easy to see unobstructed, but tough to run the wire. You’ll either have to drill a new hole, or carefully route the cable alongside your license plate light cable. Either way, it can be a real pain just to install these cameras. It’s a big reason so many people choose to have their cameras installed professionally.

With the Superfine, on the other hand, you only need to run a wire inside the car. The kit includes cable clips, a trim removal tool, and extra adhesive pads for both cameras. You can easily have both cameras set up and installed in less than 20 minutes. 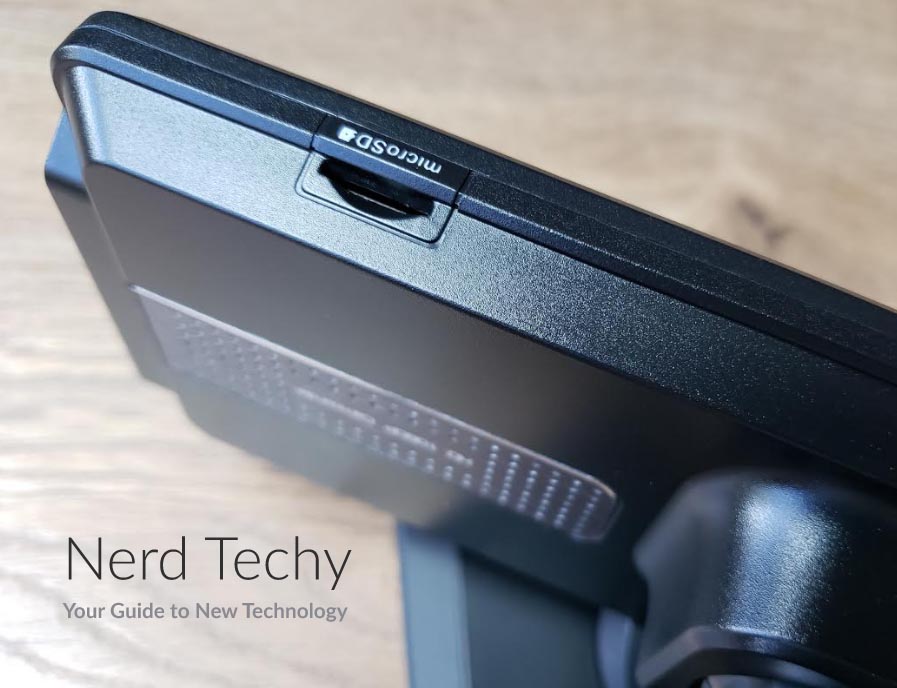 By default, the rear camera plugs into the front camera, which plugs into your 12-volt cigarette lighter port. However, some users might want to use an alternative power source. In that case, the Superfine can also be plugged into an OBD port, or patched into a 12 or 24-volt fuse box. There are additional cables included for these purposes, so you won’t have to buy any adapters.

Both the front and rear Superfine cameras have a resolution of 1080p. This is in keeping with current market norms, and it’s about what we’d expect. The front camera has a 72-degree viewing angle, and is advertised as “wide”. However, 72 degrees is actually quite narrow. You can’t see the lanes to your left and right, at least not until you’re several carlengths down the road. But the display is wide in the sense that it sees a very long distance. At the edge of its range, it is indeed displaying a fairly wide area. 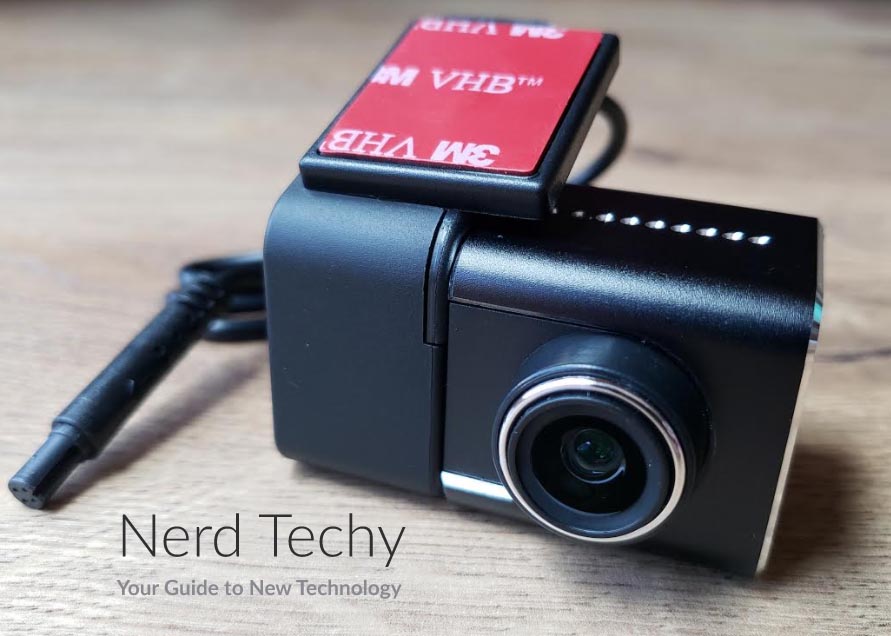 The angle of the rear camera is 140 degrees, which is within the normal range for rear cameras. It’s wide enough to see the lanes to both sides, but not so wide as to seriously distort the image. It will capture anyone coming up behind you, or suddenly swooping in from the side. That’s all you really need from a rear camera.

As we’ve already mentioned, the Superfine has superb night vision capability. In fact, it can see up to 300 meters — 984 feet — on a clear night. We’re not just talking about some grainy black and white footage, either. This is crisp, high-definition color video, almost as vivid as the daylight camera. The idea was to create a night vision camera that sees further than your headlights. In that regard, BYTL has certainly succeeded. Just keep in mind that the Superfine is meant to augment your headlights, not replace them. If nothing else, headlights are essential for other drivers to be able to see you. 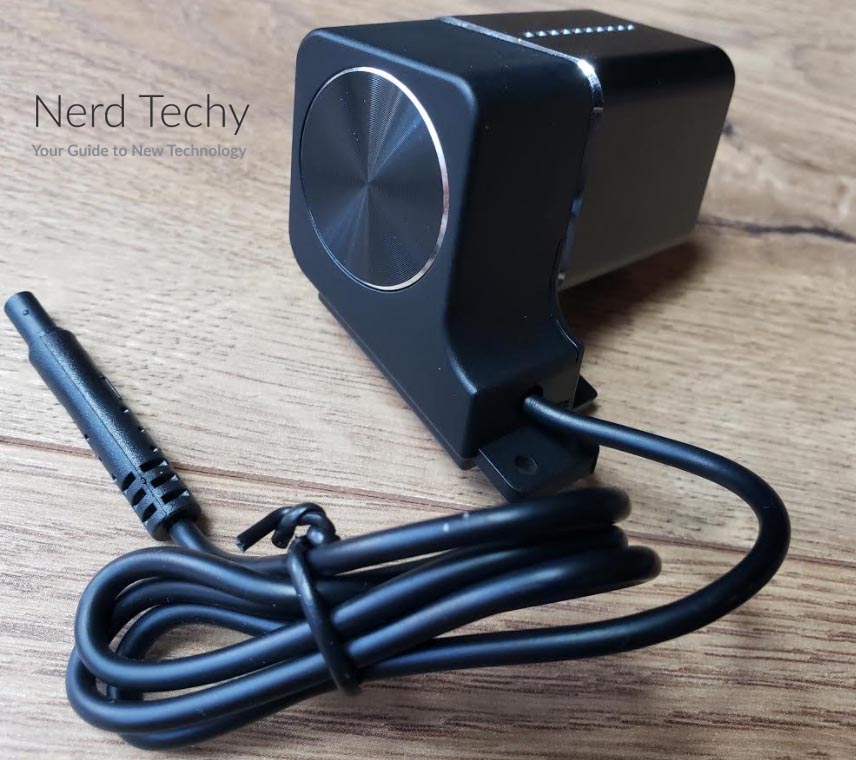 For some people, it’s most important to capture fine details with minimal motion blur. In that case, consider the JOMISE K7. It records in full 4K video at 60 frames per second, and sports a wide, 170-degree front camera. On the other hand, there’s no rear camera, and no night vision whatsoever.

Your video gets recorded to an SD card, which fits in a slot on top of the camera. There’s none included in the kit, but the Superfine supports up to a 128GB card. That’s enough for over a week of footage, way more than most people are ever going to need. In practice, most people will be just fine with a 64GB or even 32GB card. Regardless, all you have to do is insert the card, format it, and you’re good to go. Footage will be recorded using a method known as “loop recording.” Simply put, when the card is full, the camera will continuously overwrite the oldest video. This means you’ll always have access to your most recent recordings. 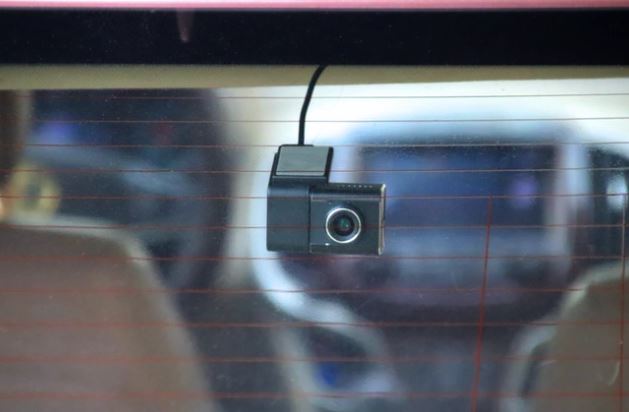 The camera has a built-in accelerometer that’s designed to detect collisions. When the accelerometer is triggered, it will immediately lock that portion of the video in memory. That way, you won’t lose any vital accident data to ordinary loop recording. That said, you can still delete videos from false alarms to clear up space. It simply needs to be done manually.

You can optionally use the Superfine as a parking security camera. In this mode, it will record in the event of an impact, even when you’re parked. This way, you’re safe even from minor parking lot fender benders. This requires using the OBD or fuse connection. It will not work by plugging into your cigarette lighter. It will also not work if you don’t have a healthy battery. If your battery drops below 11.8 volts — 23 volts on a 24-volt system — the camera will shut off. This is to prevent it from draining your battery to the point where the engine won’t start. 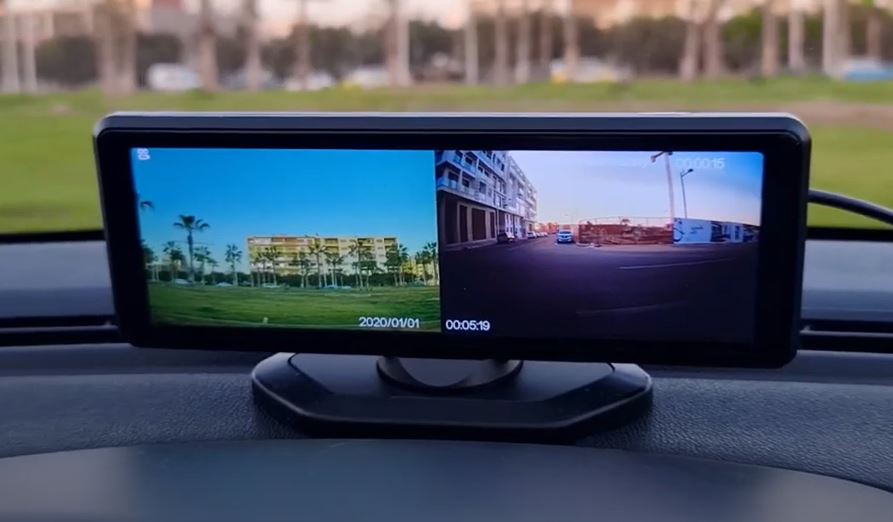 The BYTL Superfine Night Vision System is an excellent dash cam for most people. It’s easy to use, easy to install, and produces reasonably good quality video. It also comes with multiple wiring options, as well as everything you need for installation. Even if you’re a dashcam novice, you won’t have any trouble getting good recordings.