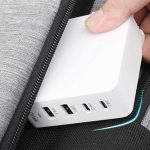 Nowadays, we count on our electronic devices to do a lot of heavy lifting. Think of your smartphone. In the 90s, you might use your phone once or twice a day to make a phone call. Now, we use our phones for social media, streaming, banking, and ordering fast food. That’s when we’re not texting, checking our email, hailing an Uber, or using a GPS app. All of this requires a lot of power, which means plugging in from time to time. And while smartphone batteries have gotten better over time, few will last for longer than a day of heavy use.

At the same time, chargers have become more universal. Instead of every manufacturer using their own cable, everyone is using USB. In fact, thanks to USB Type-C, this is increasingly becoming true for laptops as well as smartphones. The good news is that you can use the same charger to power all your devices. The bad news is that you need more power than ever. If you want a charger that keeps up with modern electronics, you’ll need one with PD power.

We’re about to review the Cirtek USB-C Fast Charger. This is a powerful AC adapter that’s capable of charging four USB devices simultaneously. To find out how well it performs, we’ll need to look at a few different factors. We’ll need to look at the physical construction – how easy it is to use and transport. Next, we’ll talk about the power delivery, and how much voltage you can get on each port. Last, we’ll look at device compatibility, as well as the charger’s safety features. At that point, we’ll know everything we need to know to render our verdict. Let’s begin! 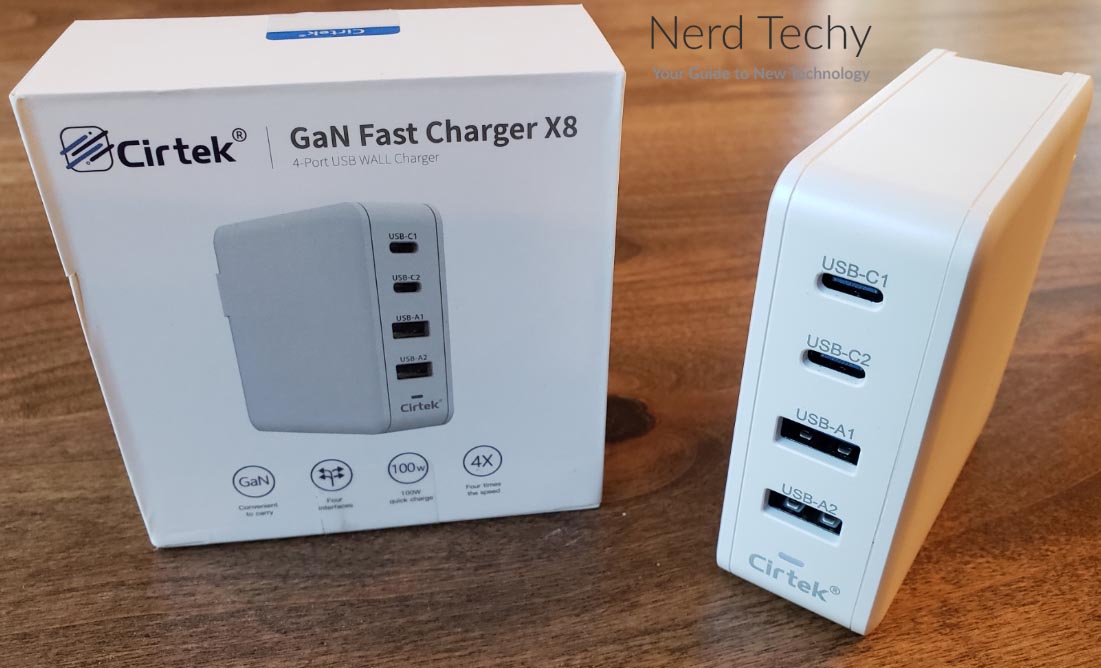 What is USB PD Power?

USB has been around since the turn of the century, so everyone is familiar with it. Even USB Type-C is more than a few years old, and is growing in popularity by the day. But PD power is a less well-known technology that merits an explanation.

To begin with, USB was not originally designed for power. It was meant for data transfer, so you could connect external hard drives and similar devices. However, a USB cable is a pair of braided copper wires. By its very nature, it’s capable of carrying some voltage. As a result, manufacturers of low-voltage devices started taking advantage of USB’s tiny amount of voltage. The USB Promoters Group, an organization of tech companies that oversees the USB standard, took note. With USB 2.0, they increased the amount of power delivery. With USB 3.0, they increased it again, this time to 12 watts. USB 3.1 increased even further, to 18 watts.

But even 18 watts is not sufficient to run many devices. It’s enough power for any modern smartphone. But if you try to charge a laptop while it’s running, you’re going to need a lot more than 18 watts. Depending on the laptop, you could need more than 90 watts. As a result, laptop manufacturers remained stuck with older, barrel-style DC adapters.

In 2012, the USB Promoters Group announced the creation of USB power delivery (PD). PD power allows a compatible USB Type-C port to deliver much higher quantities of power. At least, this was the goal. For the first six years, PD power was only slightly stronger than ordinary USB. As a result, most people had never heard of it. But in 2018, a new PD format was developed that allowed for up to 100 watts of power transfer. That’s enough to power even a MacBook Pro 16”. In fact, the Nintendo Switch charger is nothing more than a branded USB Type-C PD charger.

In addition to higher voltage, PD power offers a few advantages over ordinary USB. For one thing, it uses the Type-C format. This means a smaller, reversible cable tip. Just bear in mind that PD power requires a compatible cable. If you use an ordinary Type-C data cable, you’ll only be able to draw 18 watts or the limit of the cable.

Another advantage of PD power is that it’s smarter than ordinary USB. Ordinary USB delivers a static voltage and amperage. Any regulation is done by circuitry inside your device. USB PD, on the other hand, delivers dynamic power. If your laptop requires 80 watts, a PD charger will deliver 80 watts. If you plug in a smartphone that draws 18 watts, the power supply will automatically step down. This helps prevent your devices from overheating due to excessive power. It also prevents them from wasting electricity in the form of vampire power.

Finally, PD power allows for two-way power delivery, while previous USB versions were one-way only. This means manufacturers can design devices that charge and deliver power from the same port. Some modern smartphones, for example, allow you to use them as a power bank. You can use your phone to give your buddy a few minutes worth of charge, or power a small flashlight. 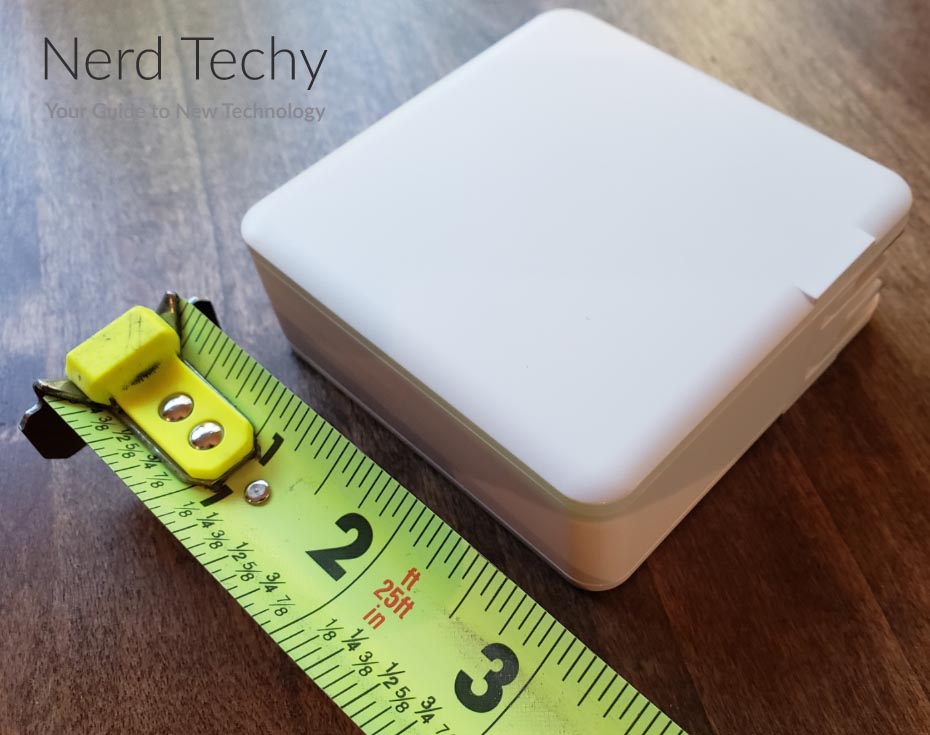 The Cirtek USB-C Fast Charger is a square charger with a high-gloss white plastic finish. The housing measures 2.7 inches in height and depth, and 1.2 inches in width. This is compact enough to slip in your pocket without any trouble. In addition, the prongs can be folded down for transport. If you throw it in your laptop bag or checked luggage, they won’t get bent or damage your other gear. 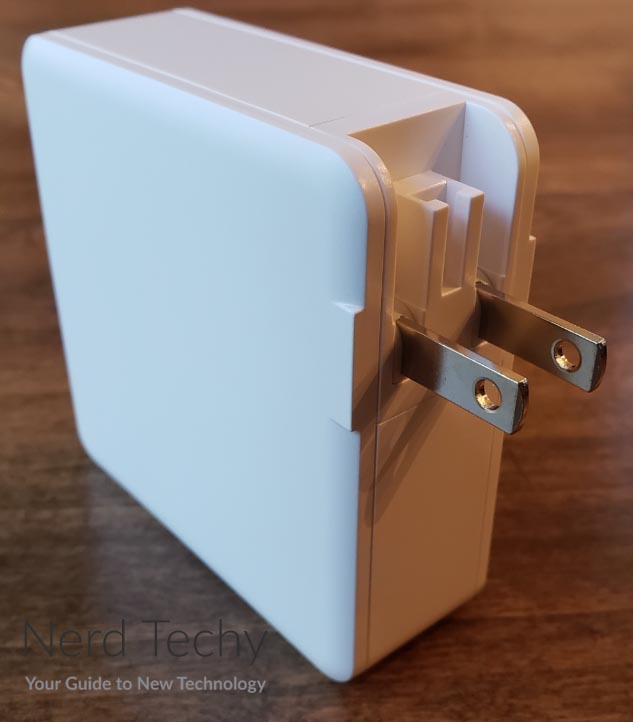 One thing to be aware of is that this charger is fairly tall compared to some others. This is essential in order to accommodate the four USB ports on the front. However, if you plug it in the top half of a duplex outlet, it will block the bottom half. You’ll run into similar issues with power strips, so plan your placement accordingly. In total, there are two USB Type-C ports and a pair of USB Type-A ports. We appreciate the high-visibility blue tabs inside the ports, since they make plug orientation easy. You won’t have to mess around figuring out which way a Type-A plug needs to be inserted.

The Cirtek charger doesn’t include a charging cord, which is a bit of an oversight. Then again, your devices probably already have their own. If you need a cord along with your charger, consider the Hyppr 100W USB-C PD Charger. It’s similar to the Cirtek in many respects, although it doesn’t provide USB Type-A power. 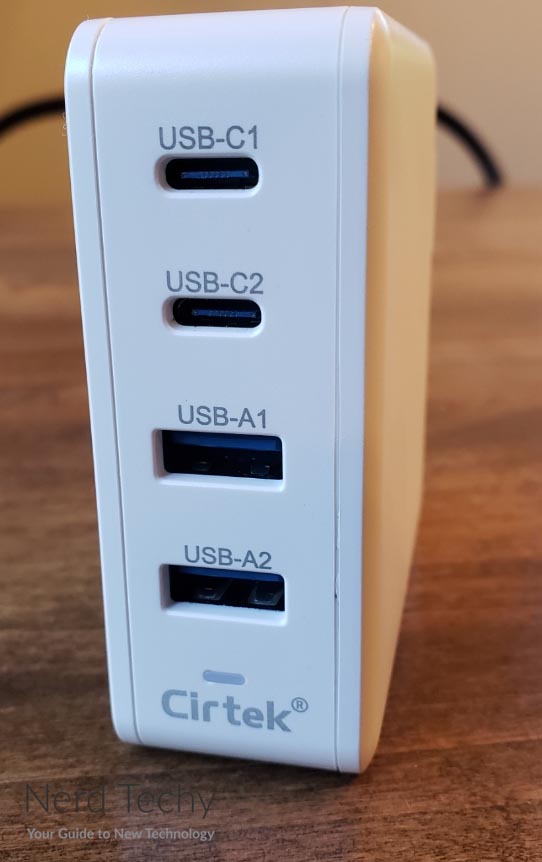 The Cirtek charger is capable of delivering 100 watts, the maximum possible under the current USB PD standard. This means it’s capable of charging any USB-powered device on today’s market. That said, keep in mind that the 100 watts is shared across all ports. The more devices you plug in, the less power will be available on each port. Here’s how it works.

The top port, labeled USB-C1, can deliver a full 100 watts. If you’re plugging in a large laptop, use this port, or you might not get sufficient juice. The second USB Type-C port, labeled USB-C2, can deliver up to 30 watts. This is sufficient for most tablets and some very small laptops. However, if you plug devices into both Type-C ports, the power will be split. The top port will get 65 watts, and the bottom port will get 30 watts. The USB Type-A ports support Quick Charge 3.0 technology. They can deliver up to 18 watts of power individually. If you’re using all four ports, the top Type-C port will deliver 45 watts, and the next will deliver 30. The Two USB Type-A ports will then deliver 7.5 watts apiece. 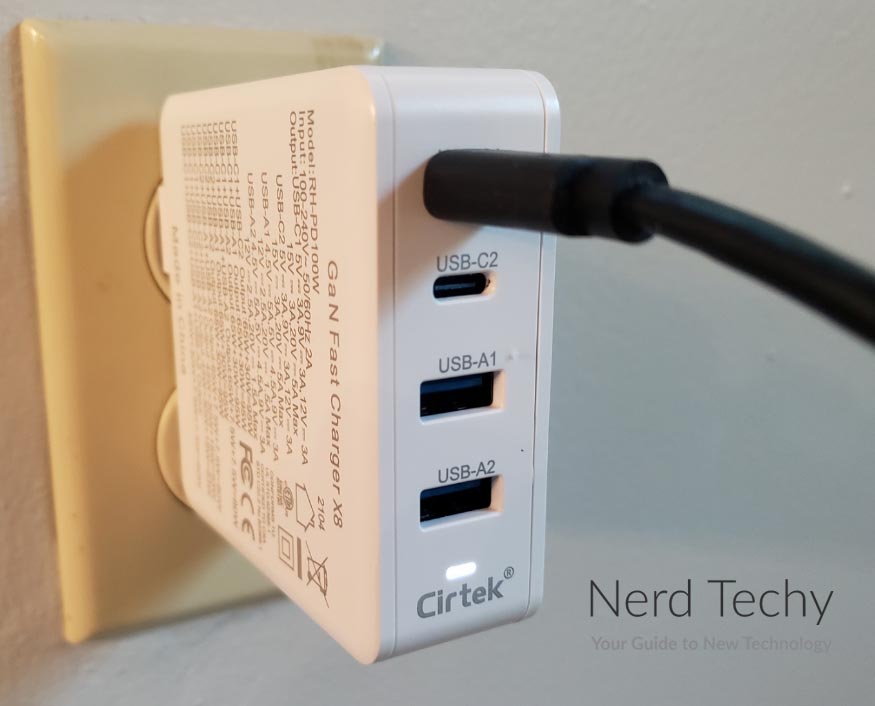 This is more than enough power delivery to charge pretty much any USB device. But maybe you just want to charge one thing. In that case, the Choetech 61W USB-C Charger may be a better choice. It’s not as powerful as the Cirtek, but its single port is sufficient for many small to mid-sized laptops.

Because the Cirtek charger has both Type-A and Type-C USB ports, it can charge virtually anything. Even Lightning and Micro USB devices typically plug into one of these types of ports on the other end. Unless you’re using a truly unusual device, you shouldn’t have any issues plugging in. The Cirtek supports 220/240-volt power as well as 110/120-volt. This means it can be used throughout the world, on any standard power system. All you’ll need is an adapter for the prongs. 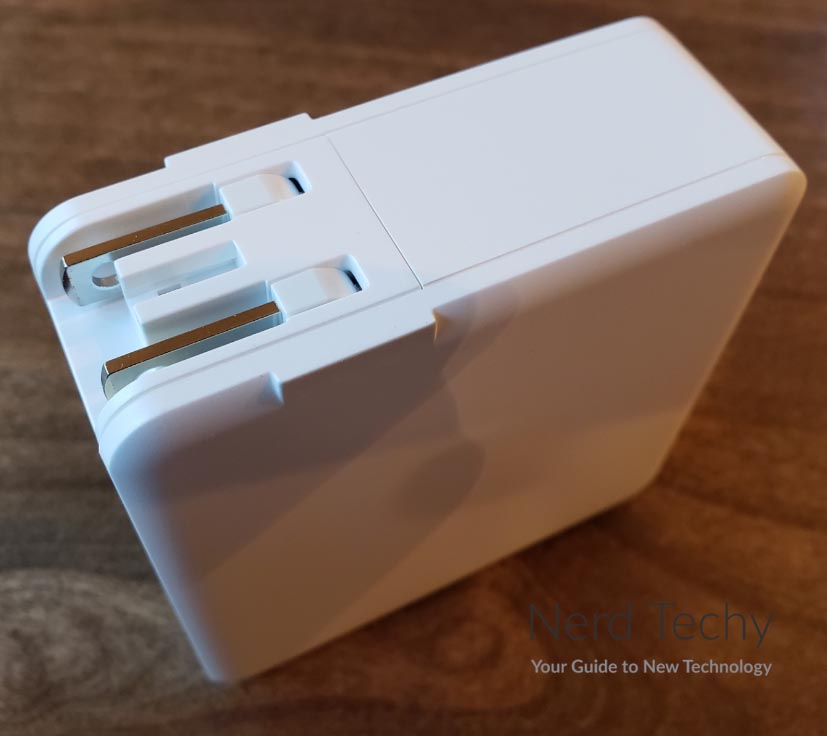 In addition, this charger utilizes Gallium Nitride (GaN) circuitry. GaN circuitry is more efficient than traditional circuitry, which reduces the total power draw. This means you’ll pay less in your energy bill for charging any given device. We’ve actually reviewed a handful of GaN chargers in the past. One of the most impressive was the Galio Charger, which supplies up to 100 watts. However, it has three ports instead of the Cirtek’s four.

There are a handful of safety features built into the Cirtek charger for your protection. To begin with, the housing itself is fire-resistant, and the circuitry will shut off if it reaches too high a temperature. Additional protections are in place to prevent short circuits, over-current, or over-voltage. 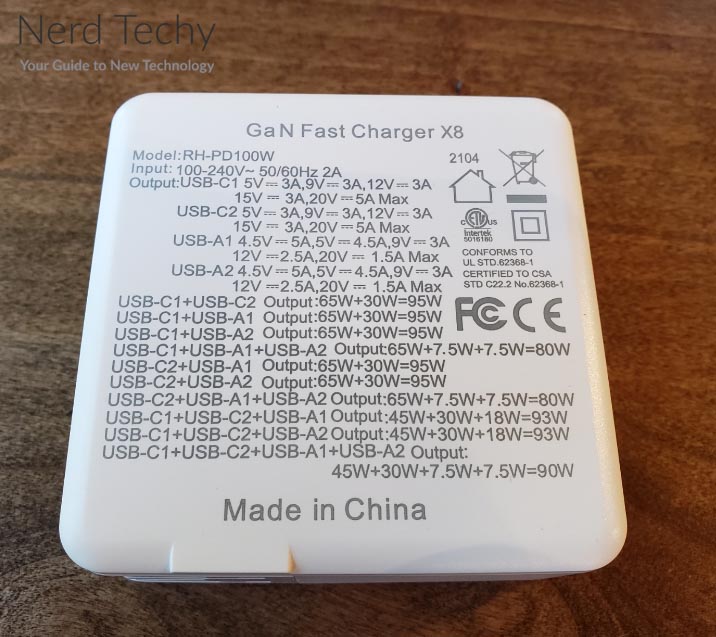 The Cirtek USB-C Fast Charger is one of the better PD chargers we’ve reviewed. To begin with, it can power up to four devices at once, so the whole family can share. For another thing, it delivers up to 100 watts, so it can power even the most demanding USB-powered laptops.

Our only complaints were minor. The size is necessary to accommodate all four USB ports, and it’s still pocket-sized. And the absence of a charging cable is par for the course with many USB chargers. With smart power delivery, plenty of safety features, and efficient GaN circuitry, there’s a lot to like. The ability to accept international power is just icing on the cake.