Back in the early days of gaming, handheld game systems were some of the hottest choices on the market. Games like Pokemon, Kirby’s Dream Land, and Dr. Mario were among the most popular of their generation. With the mass adoption of smartphones, handheld consoles have gone the way of the dodo. But that doesn’t mean that mobile gaming is going anywhere.

Far from it! Beginning with simple games like Angry Birds and Candy Crush, mobile gaming has become bigger than ever. And that was just the beginning. Now, you can even play your favorite shooters on your smartphone. Games like Fortnite and PUBG have their own mobile versions, so you don’t need a PC or console to play.

But smartphones can be fairly limiting. Touchscreens can get twitchy, and if you have fat fingers, it’s easy to make mistakes. And even for the most skilled mobile players, a smartphone ultimately lacks the precision of a proper controller. As a result, mobile-specific controllers have started to become more and more popular.

One of the most innovative is the GameSir F4 Falcon. Rather than rely on a Bluetooth connection, the F4 Falcon directly presses the buttons on your screen. Obviously, this will eliminate some lag. But how well does the F4 Falcon actually perform? And how well is it built? We’ve had the opportunity to review this controller, and now we’re passing on our knowledge to you. One thing we should point out before we begin is that the F4 Falcon is not yet shipping to the public. That said, it’s available for pre-order, and is expected to start shipping in the first quarter of 2020. With that out of the way, let’s get started! 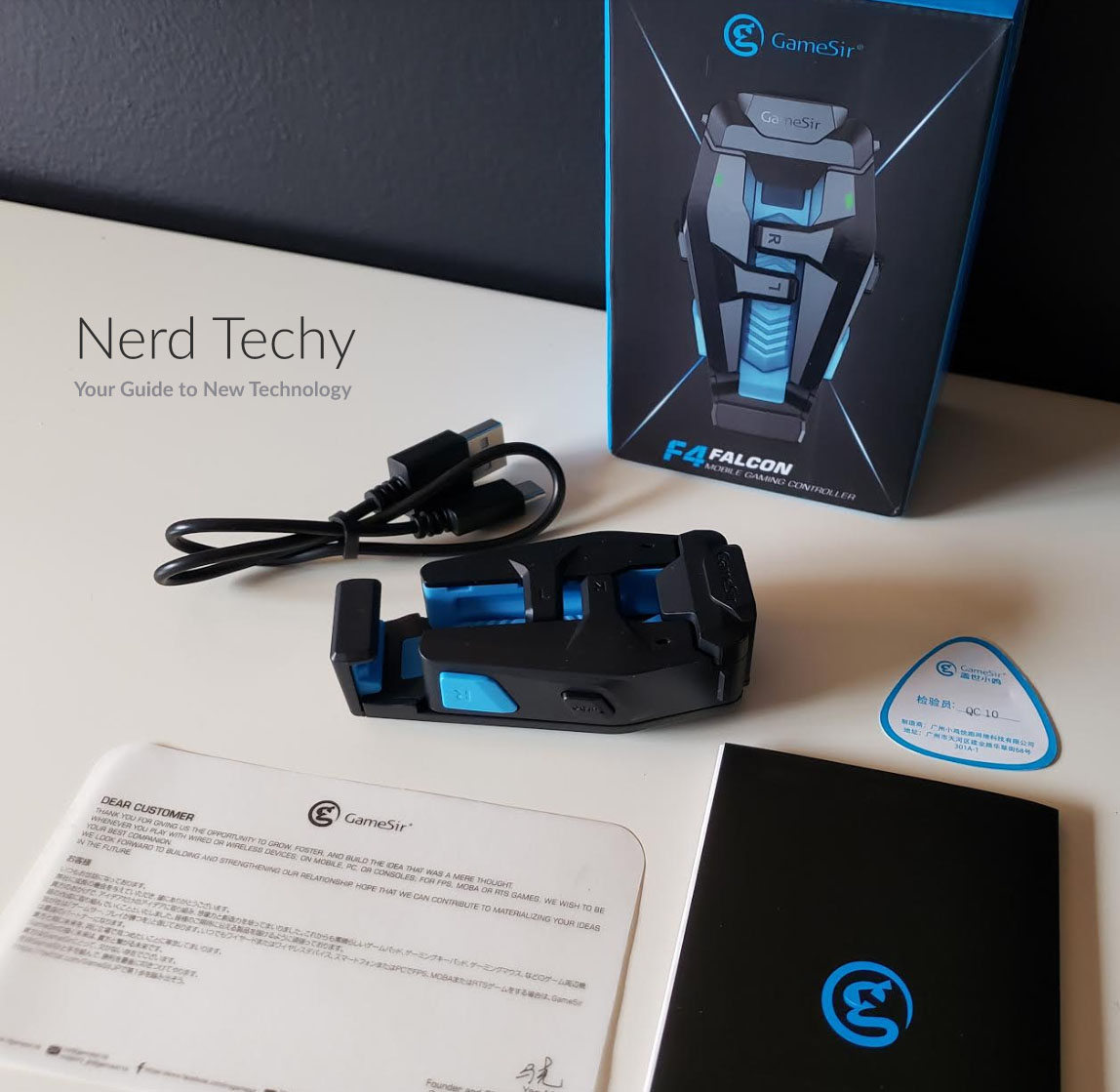 The Falcon F4’s most standout feature is the fact that it’s mechanical, not wireless. Now, there’s nothing wrong with a wireless controller. Some of them are quite good. For example, we recently reviewed the GameSir G6. It’s a fine controller, with a lot to offer, and we gave it a hearty recommendation. But Bluetooth controllers will inevitably introduce some lag into the equation. And for shooters and other games that require quick reactions, even a few milliseconds of lag can limit your performance.

The Falcon F4 has zero latency, with a fully mechanical design. Since it taps the screen just as fast as you work your fingers, there’s no possibility of lag. There’s also no reason to worry about losing your connection in the middle of the game. And that’s a serious concern when you’re using a Bluetooth controller. Moreover, you won’t have to worry about installing any drivers or using any third-party configuration software. 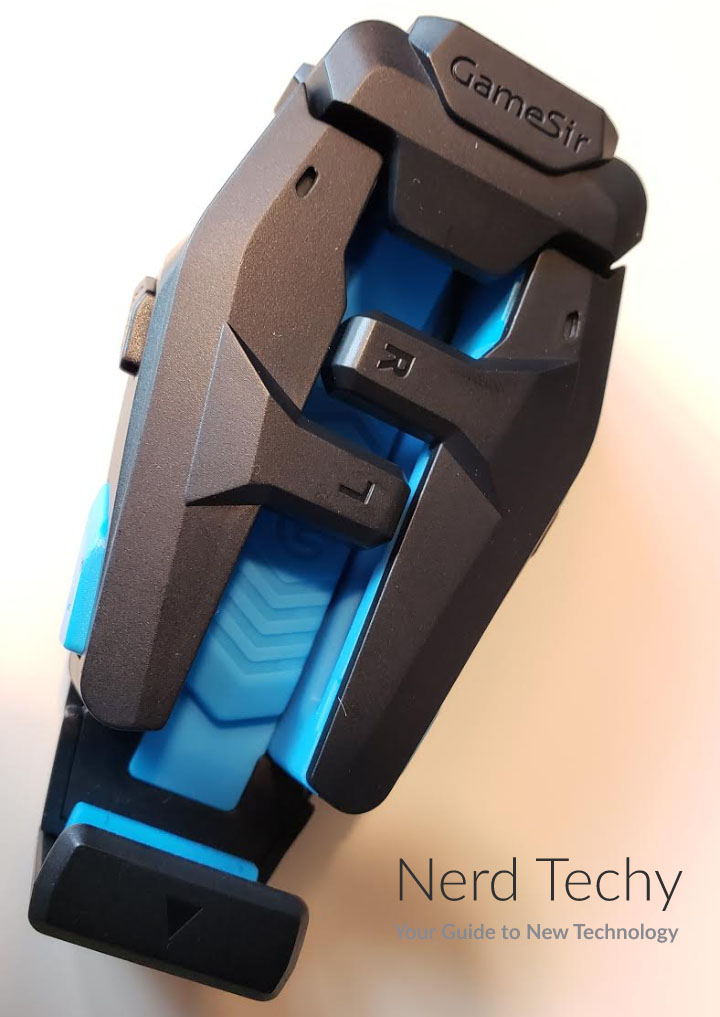 In terms of ergonomics, the Falcon F4 is very well designed. Its minimalistic shape conforms to your smartphone, and doesn’t add a lot of bulk. It has a simple, two-button configuration, with a pair of triggers by your left and right index fingers. This allows for easy play of most mobile games, since they typically are designed for control with two fingers or thumbs. Each of the triggers is attached to a small, rubberized flange that extends over your phone’s screen. When you press the trigger, the flanges tap the screen, just as your fingers would. 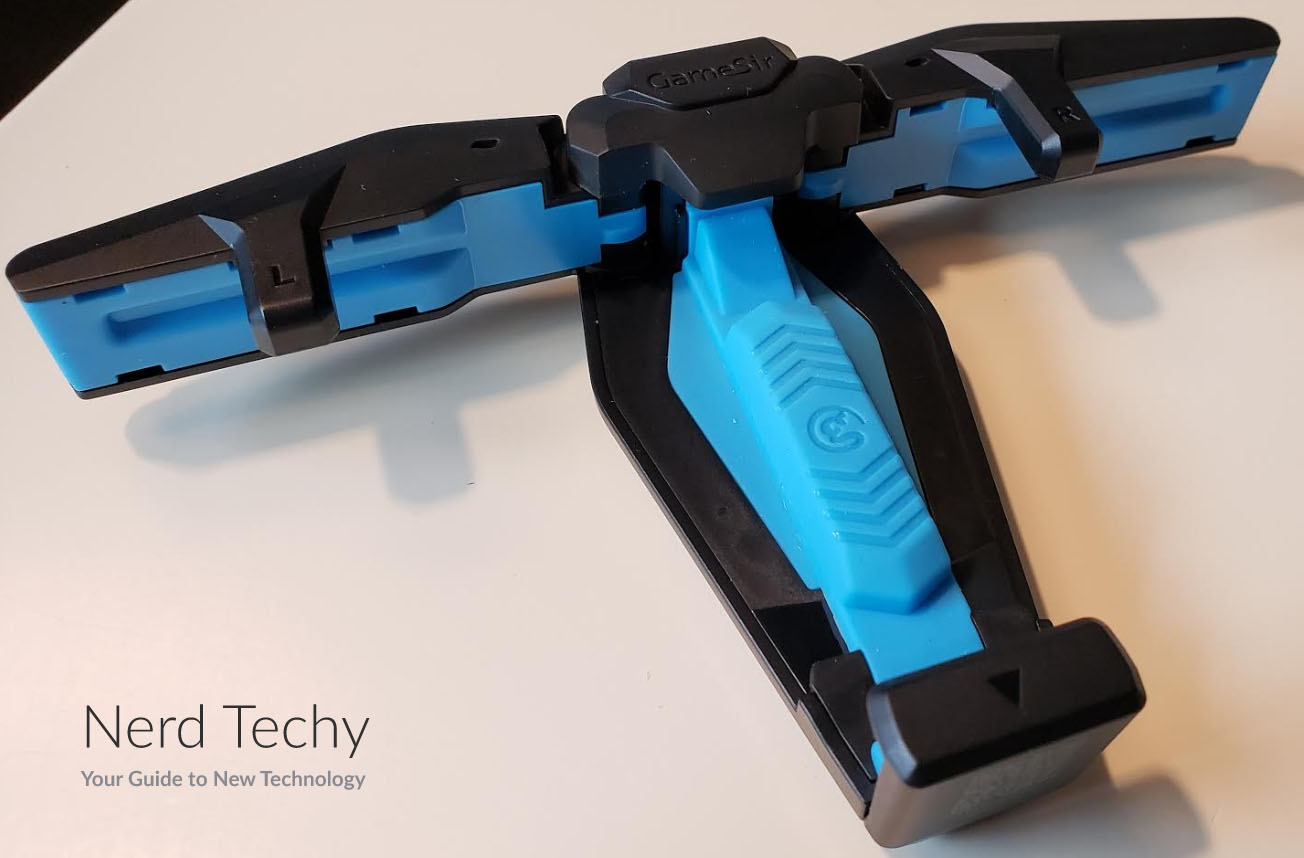 The Falcon F4 gets its name from its unique shape. There’s a central bracket that holds your smartphone, while the arms extend across the top of your phone like wings. It collapses when it’s not in use, which makes it easy to store and carry. There’s also no need for a power switch. The Falcon F4 turns on automatically when it’s opened, and shuts off when you collapse it. The clamp is both secure and protective, with rubber cushions on the top, back, and bottom. The bottom portion is spring-loaded. Simply pull it open, set your smartphone inside, and release it. It will snap into place easily.

The Falcon F4 is large enough to support the vast majority of smartphones, including iPhones and Samsung Galaxy phones. That said, thickness may become a problem, particularly if you have a very thick phone case. For a better fit, consider a gaming case like the GameSir i3. Not only does it have a slim profile, but it’s manufactured by GameSir, so it’s compatible with their controllers.

If you’re also a console gamer, you’ll already be familiar with the Falcon F4’s charging method. It has a USB Type-C port in the front center, and includes a USB Type-C cable. Simply plug it in, and it will fully charge in 1 to 2 hours, depending on your power supply’s voltage. Playing while charging is an option, if you so desire, much like most console controllers. However, that really shouldn’t be a problem. The Falcon F4 offers 40 hours of playing time when fully charged. It also offers an impressive 200 days’ worth of standby time. So if you put it in your drawer and forget about it for a few months, it will still function. 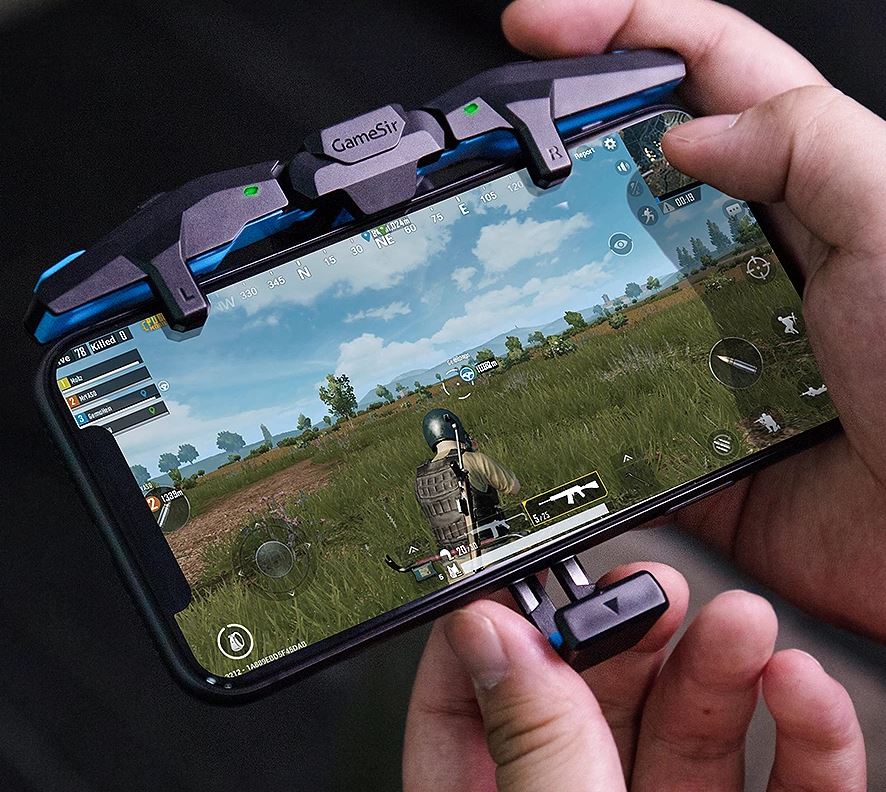 One drawback of many Bluetooth controllers is that they can be finicky. Some of them only pair with iOS devices. Others will only work with Android. And because there are so many flavors of Android, some controllers only work with some versions. By comparison, the Falcon F4 works with just about any smartphone. As long as your game allows you to drag the virtual buttons, it will allow you to play with no issues. For this reason, you won’t need to buy a new controller just because you bought a new phone.

One difference between older games and newer games is that you’ll need to perform more button presses. This can be a challenge for controllers, especially for games that only use two buttons. Think of a game like PUBG. Every time you fire a shot, it shaves a little bit off of your controller’s life. GameSir took this into account, and built the Falcon F4 to E-sport standards. Each button is rated for 5 million presses, so you’ll be using this controller for many years. The feel is also nice and clicky. Instead of using soft touch buttons, GameSir used buttons with plenty of tactile response. This doesn’t feel like a cheap mobile controller. It feels like a well-engineered console controller.

In addition, the Falcon F4 is specifically designed for shooters. As such, it has a turbo button for each trigger. Pressing the turbo button will cycle through four different modes, which gives you plenty of choices. The first, default mode is fairly straightforward. With each click of the button, you’ll fire a single shot. This is a great way to conserve ammo. But what if you need to lay down a little more firepower? Press the button once, and it will go into burst mode, where a single click fires three shots. Press it a second time, and it will fire six shots with a single click. Press it a third time, and it will fire an impressive nine shots. Pressing the turbo button for a fourth time will return the controller to its default mode.

One drawback of Bluetooth turbo controllers is that they use software to engage the turbo mode. Many games use sophisticated methods to detect this kind of turbo button. As a result, actually putting them to use is a quick and easy way to get whacked by the ban-hammer. Because the Falcon F4 is entirely mechanical, there’s no software involved. Each shot fired by the trigger in turbo mode is an actual tap on your screen. Thanks to this innovative feature, you won’t get banned for using the F4’s turbo buttons.

One major drawback of the Falcon F4 is that it’s only compatible with mobile phones. Without a wireless connection, it can’t be used for your console or PC games. For that, you’ll need a true wireless controller. The PowerA MOGA XP5-A Plus is an excellent example. It works with the Xbox One, Playstation 4, and PC, so you can use one controller for all your games. 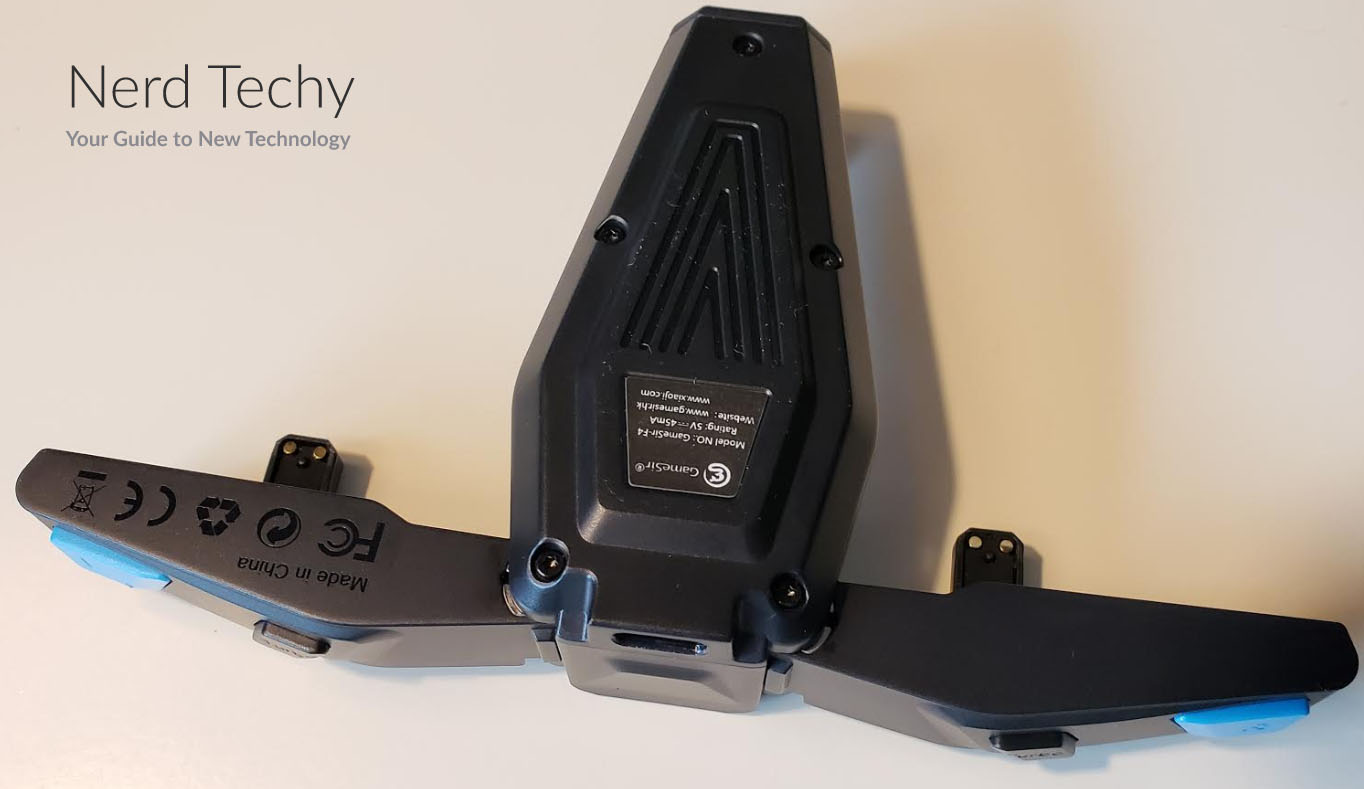 The Falcon F4 is one of the most impressive mobile controllers we’ve seen. We particularly appreciated the mechanical design, since it eliminates all the issues that plague Bluetooth controllers. The compact design is also a significant benefit. When collapsed, it’s literally small enough to fit in your pocket. It’s easy to use, and accommodates almost any smartphone. And the battery life is out of this world. We’ll put it this way: if you need more than 40 hours between charges, you should probably get some sleep.

We’ll end this review with a warning. At the time of this writing, GameSir is only offering the Falcon F4 for pre-order. But while doing our independent research, we found some listings for immediate shipment on third-party sites. On those same sites, we saw streams of complaints from users that they had not received their controller. Stay away from these sites, and stick with the official GameSir site. You’ll have to wait until the Falcon F4 actually ships, but it will ship.

4 of the Best Kickstand Replacements for Nintendo …
January 6, 2022