Gamers love to root for our favorite console. It’s built into our DNA. Are you a PlayStation fan? You can probably tell all your friends exactly why the PlayStation 4 is the best console ever. Similarly, if you love your Xbox One, you probably have a laundry list of features that make it clearly superior. Far be it from us to wade into the console wars. As the old maps say, “there be dragons”. But whatever console you prefer, it’s always possible to improve on any controller layout.

Things get even more complicated when it comes to mobile games. As recently as a few years ago, the term “mobile game” meant Candy Crush. If you wanted something really advanced, you might have played Angry Birds. Regardless, these games weren’t exactly demanding from a control perspective. A few taps here, a drag there, and you were good to go. But with more advanced games like Fortnite hitting the mobile market, you might find that your touchscreen isn’t quite enough.

To be sure, there’s no rule against using your touchscreen for these games. The mobile controls can and do work just fine. But at the end of the day, Fortnite and other similar games were originally designed for consoles. And as a result, console-style controls can give you an advantage over gamers who use mobile controls.

Today, we’ll be reviewing the PowerA MOGA XP5-A Plus, a Bluetooth controller that works with consoles and mobile. It’s a well-designed controller with a layout that’s a cross between an Xbox and a PlayStation controller. So if you’re not 100 percent happy with your console’s default controller, you may find that it’s perfect for you. But besides an alternative profile, what else does it have to offer? We’ve taken a close look, and we’re going to pass our knowledge on to you.

Of course, not everybody wants or needs a slick, modern controller. Many people still enjoy the charm and small profile of an old-school controller. This is particularly helpful if you’ve got small hands. If you have a hard time wrapping your hands around a modern controller, the 8Bitdo Lite Bluetooth Gamepad might be a better fit. It has a similar profile to the Super Nintendo controller, with extra directional and control buttons on both sides. 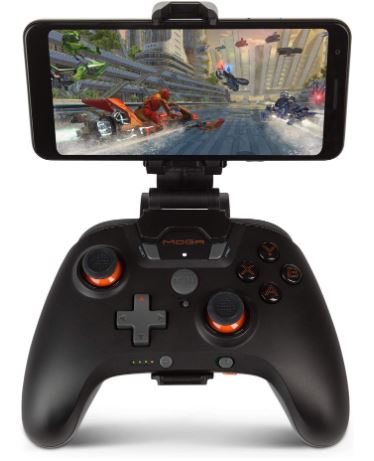 The first thing you’ll notice about the XP5-A is that it has a wide, broad shape. Rather than wrapping your hands completely around the two sides, it’s designed for a looser grip. However, it’s not quite as fat as an Xbox controller. Hence, it’s a good fit for Xbox users who want a slimmer profile, or for PlayStation users who want a chunkier grip. The overall weight is 1 pound. That’s enough to let you know you’re holding it without being overly cumbersome.

One thing PlayStation users will definitely appreciate is the offset thumbsticks. This is a more ergonomic design for most people. It makes it easy to operate the four main buttons with your right thumb. But there’s plenty here for Xbox users as well. The triggers and bumpers are more evenly sized than those on the Xbox One controller. The bumpers in particular have a much softer touch, so you won’t have to deal with the Xbox’ stickier bumper controls. 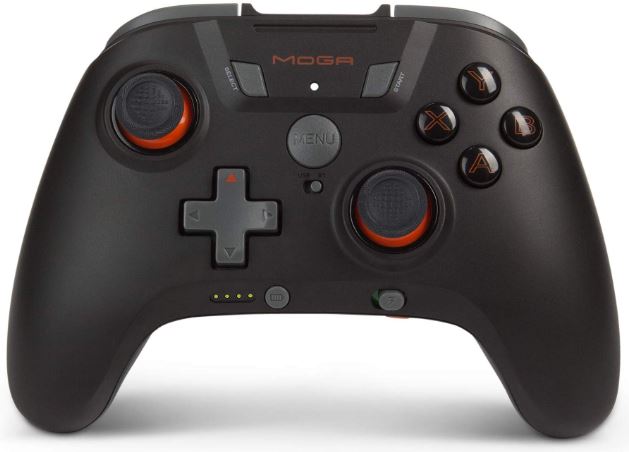 And there’s another feature that will benefit both Xbox and PlayStation players. Specifically, there’s a pair of mappable gaming buttons on the bottom. They’re meant to be operated with your ring fingers. For consoles, it makes sense to map these to the R3 and L3 functions respectively. It’s a bit easier than clicking the thumbsticks, particularly while you’re using them for another purpose. These buttons are even more useful for PC gamers. Since PC games aren’t limited to the buttons on a console controller, they often offer more advanced controls. And with the XP5-A, you’ll have that extra pair of functions right at your fingertips. 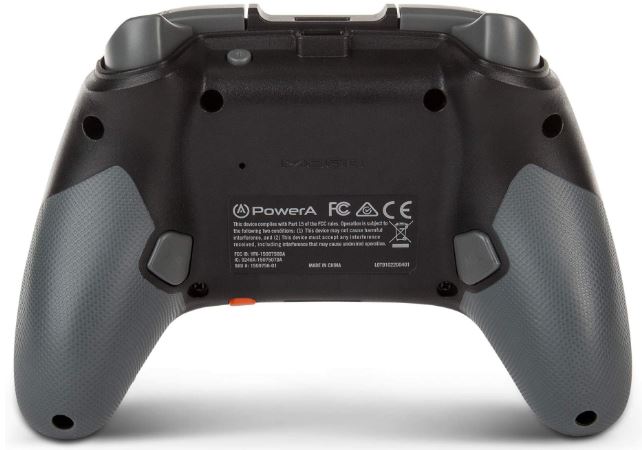 Another thing we appreciated about the XP5-A was the textured rubber at the bottom of both grips. It’s unobtrusive, and doesn’t add any extra bulk. But if your hands have ever slipped just as you’re taking that prime sniper shot, you’ll appreciate the extra grip. The XP5-A comes with a two-year limited warranty, which covers you for any defects in manufacturing.

The XP5-A also ships with a detachable phone clip. It’s designed to fit smartphones that measure up to 3.12 inches in width, which accommodates most major smartphones. The arms on the clip are rubberized, which provides for a secure grip without marring your phone case. 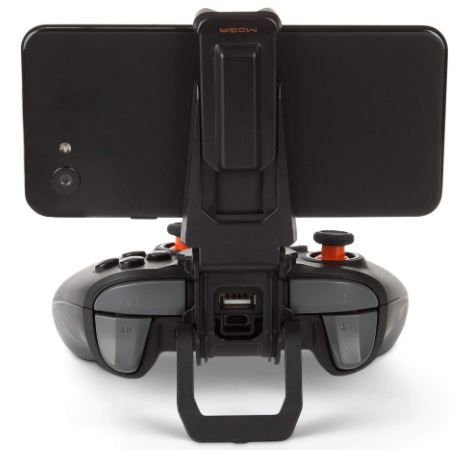 This is where the XP5-A really shines. When you’re using normal smartphone controls, the touchscreen can be awkward. This is particularly true for games with complex control schemes and small, on-screen buttons. Not only that, but touchscreen controls can pose another problem. Namely, your hands can get in your way. This isn’t a problem for all games, but it can be a serious issue if your game requires fast reflex response. With your thumbs flying all over the screen, it can be easy to miss small details. For example, in Fortnite you might miss an opposing player who’s just barely visible in the distance. You’re happily building a defensive structure, then – bam – you’re dead. Without your thumbs in the way, you would have had a fighting chance. 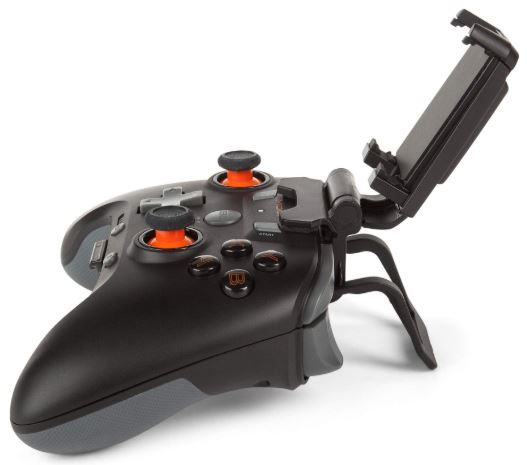 With the phone clip, your mobile game will feel more like a handheld system. If you’re a veteran Game Boy or PSP player, you’ll appreciate the design. It keeps your screen right between your hands, while keeping your hands away from the screen. There’s also a built-in kickstand on the bottom of the controller. This is utterly useless while you’re actually playing, and can be folded out of the way. But if you want to set your controller down with a smartphone attached, it ensures the XP5-A won’t tip over.

Another thing we liked was the thumbsticks. A lot of aftermarket controller thumbsticks have too much play in them. Not so with the XP5-A. The sticks provide a slight resistance, enough to keep them from flopping around at random. They’re also very well-tuned. With a few minutes’ practice, you’ll have absolutely no problem getting your crosshairs on target. 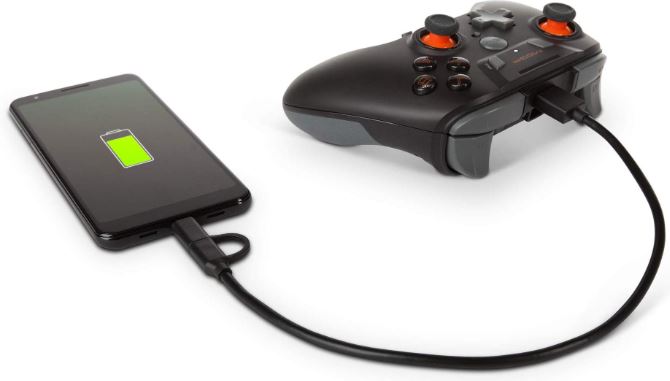 But suppose you want a handheld gaming experience from your smartphone, but don’t like the XP5-A’s chunky design? There are slimmer, more compact options available. One of these is the 8Bitdo SN30 Pro Plus. It fits comfortably in even the smallest hands, and it’s impressively responsive.

The XP5-A can work in both wired and wireless mode. The easiest way to use it is with a Bluetooth connection. This is the preferred method for connecting to your PC or smartphone. However, the included Micro USB cable is better for connecting to your PlayStation or Xbox console. When connected via Bluetooth 5.0, you get virtually zero lag, which is essential for any multiplayer game. 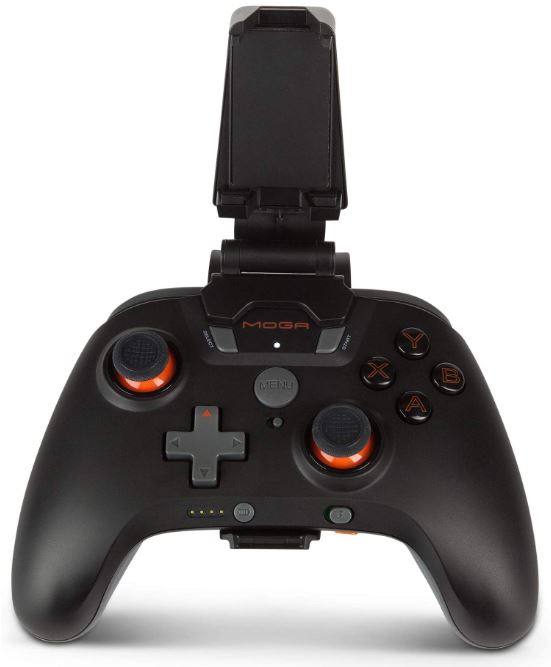 The Micro USB cable is easiest to connect to your game console with, but there’s also a standard USB port. This allows for faster charging of the XP5-A’s internal battery pack. The battery allows for 12 hours of gameplay when fully charged. That said, your mileage may vary. Depending on how fast you play and how much time you spend on pause, you may get more or less.

The XP5-A also functions as a power bank. Simply plug it into your smartphone with the Micro USB cable, and you can charge your phone as you play. Similarly, you can charge the controller itself while you’re playing. This means you’ll never run out of battery life, as long as there’s a power source nearby. A row of LED lights under the D-pad displays the current battery level, so you’ll never get caught by surprise. 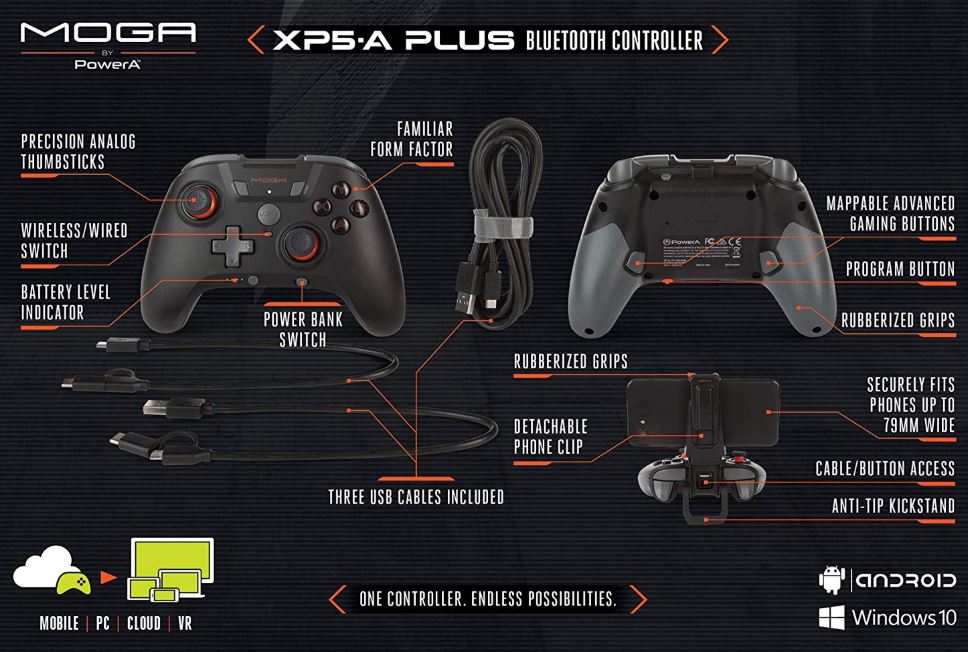 All of that being said, not everybody wants a large controller for mobile games. Suppose you just want a few extra buttons while you’re playing Fortnite on your lunch break? If that’s all you need, the GameSir i3 might be more your speed. It has the profile of an ordinary smartphone case, with extra mappable buttons for gaming.

The PowerA MOGA XP5-A Plus has a lot to offer. It’s a great choice for console gamers who want a more comfortable grip. And it’s an even better choice for mobile gamers who need a better control scheme. 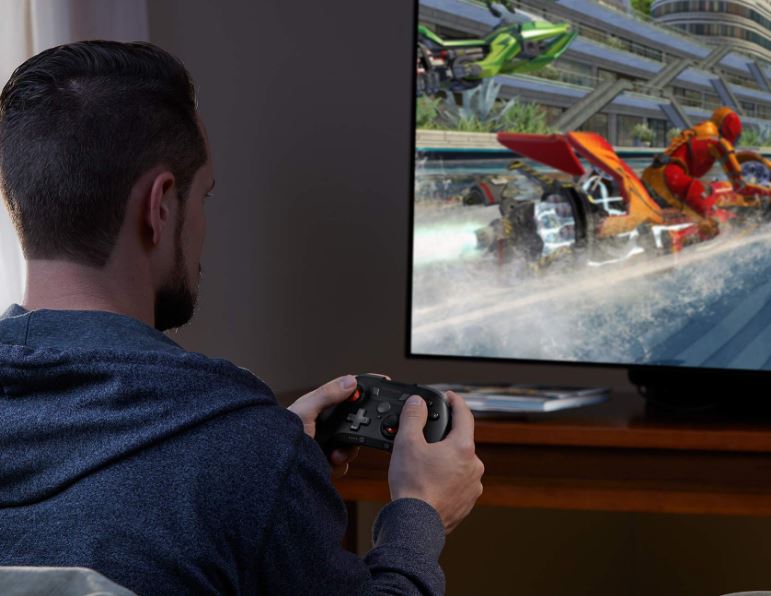 The most obvious feature of this controller is the smartphone clip. It’s tight and secure, but the soft contacts will keep your phone from getting scratched. The extra buttons are also a nice touch. They’re a particularly useful feature for PC gamers, since you’re liable to need more advanced controls. The rubberized grips make the XP5-A easy to hold, even during an intense gaming session. And the power bank function will keep your smartphone from running dry while you’re playing. All in all, the XP5-A is an excellent choice. Our only disappointment is that it won’t be here in time for Christmas. It starts shipping in January.