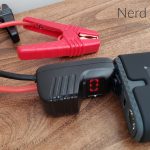 Whether you’re working, playing, or shopping, you count on your car to get you from point A to point B. When something goes wrong, it can put a significant hitch in your day. A flat tire, for example, is an enormous headache. At the very least, you need to put on your spare. This could mean going out in the rain, or kneeling in slush at the side of a busy roadway. Not only that, but it can make you late for getting to wherever you’re going. The time factor is particularly significant when you’ve got a dead battery. Even if you’re prepared with a set of jumper cables, you need to hope a friendly stranger will help you. Depending on where you’re parked, you might end up waiting a while.

With a portable jump starter, you don’t have to wait for someone to jump you. You’ve got the necessary tools ready to go in your trunk or center console. But you don’t want to choose just any old jump starter. You want to find one that’s got the features you need. First and foremost, this means finding one with enough power. Different jump starters provide more or less amperage, which means they can start larger or smaller engines. If you drive a sub-compact, pretty much any jump starter will have enough juice. But if you drive an SUV or diesel truck, you’ll need to be a lot more discriminating. 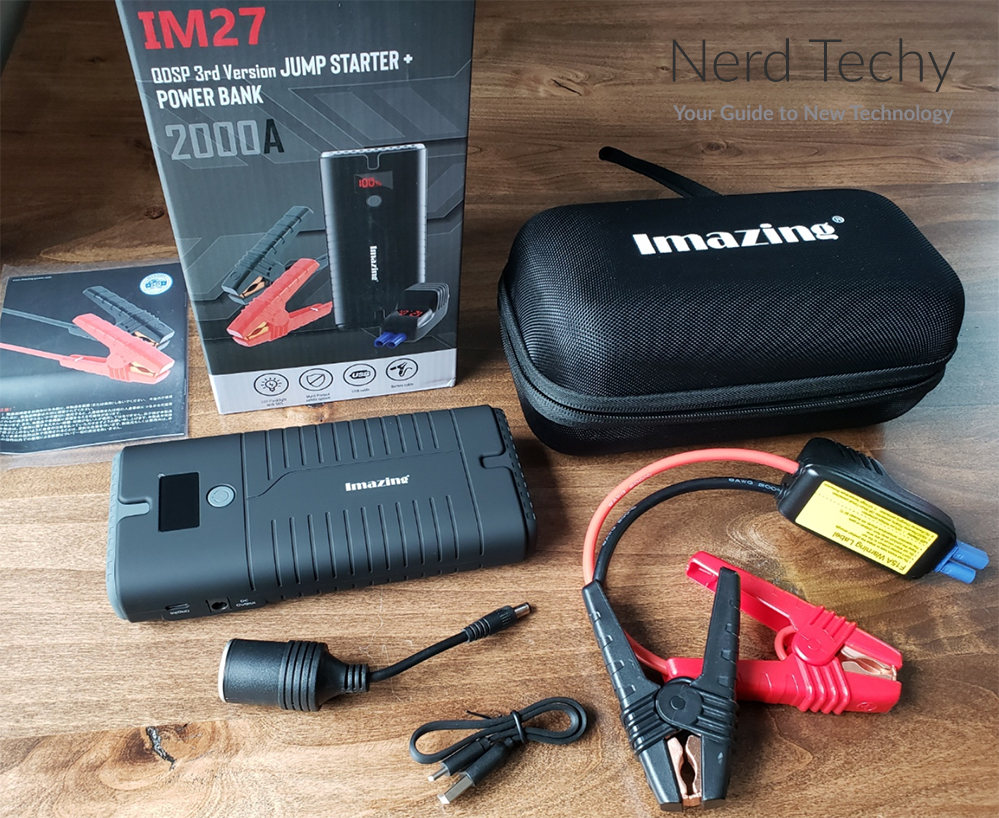 Today, we’re going to review the Imazing IM27 Portable Jump Starter. This is a high-powered jump starter that can fire up all but the highest-displacement engines. It also functions as an emergency power bank, and even has a built-in flashlight. But how well does it actually perform in practice? How large an engine can you start, and how much capacity does the power bank have? We’ll look at all the important features, beginning with the physical build. We’ll talk about the battery performance, the safety features, the charging, and everything else you need to know. After that, we’ll have enough information to deliver a fair verdict. Let’s begin! 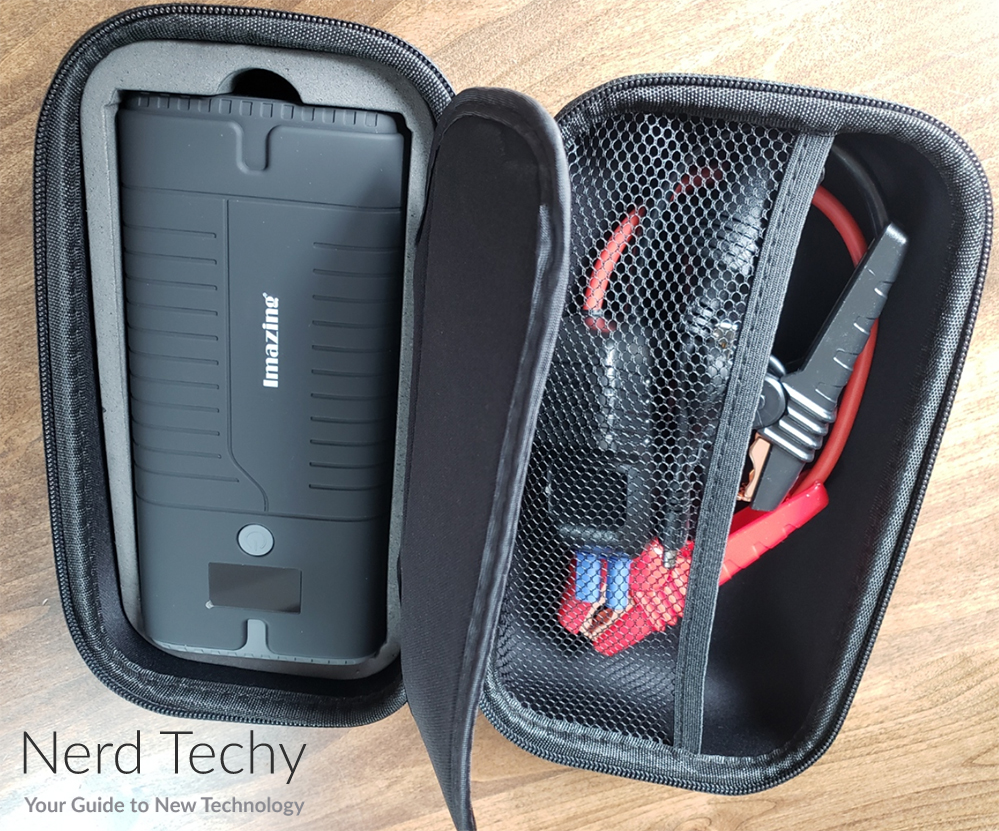 The Imazing IM27 Portable Jump Starter has a rectangular housing, constructed from a matte black plastic. The edges are curved for comfort, and grooved to help provide a secure grip. The total size is 7.5 inches long, 3.5 inches wide, and 1.4 inches thick. That’s perfect for holding in one hand, and small enough to fit in your glove box. And at only 18 ounces, it’s lightweight and easy to carry. 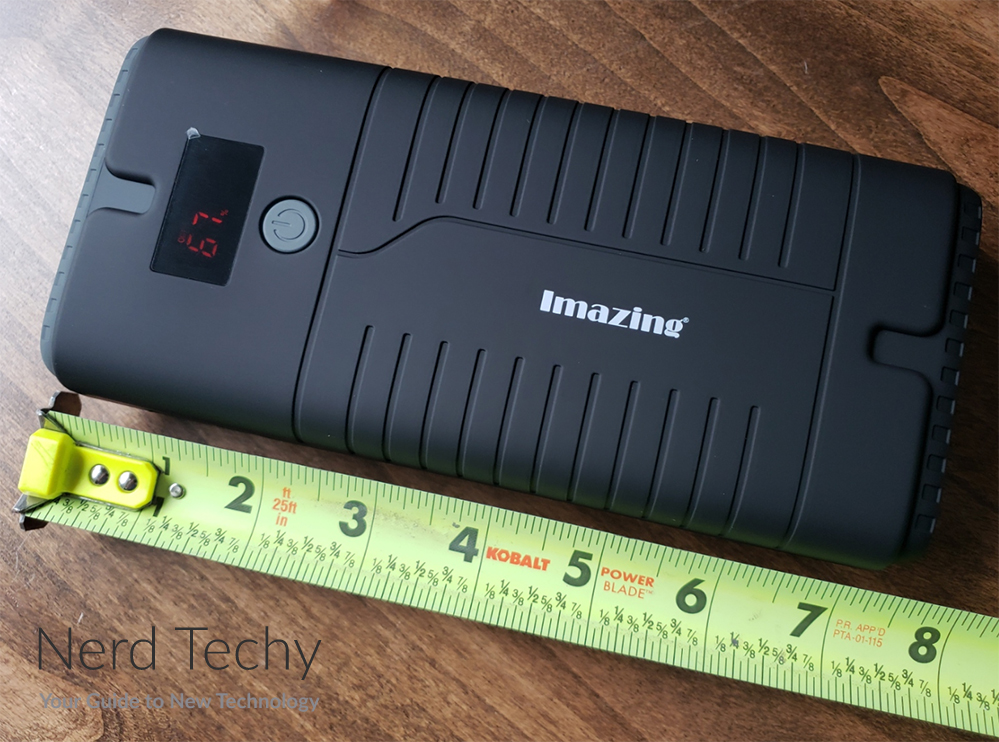 The top surface has a grey power button in the center, to turn the jump starter on and off. By keeping it off when it’s in storage, you can significantly extend your battery life. It’s smart to recharge the battery once a year just to be safe. But even after a year in storage, you’ll have well over half of the total charge remaining. When the IM27 is powered on, the top display will light up. This is a small black screen with red LED numbers and letters. It shows you the percentage of battery charge remaining, and whether power is flowing in or out.

The left edge of the housing has a USB Type-C port towards the front. This can be used as part of the power bank function, but it primarily serves to charge the battery. A USB Type-C charging cable is included in the kit, along with an automotive adapter. If you’d rather not charge it in your car, you can just charge it at home using any USB power adapter. 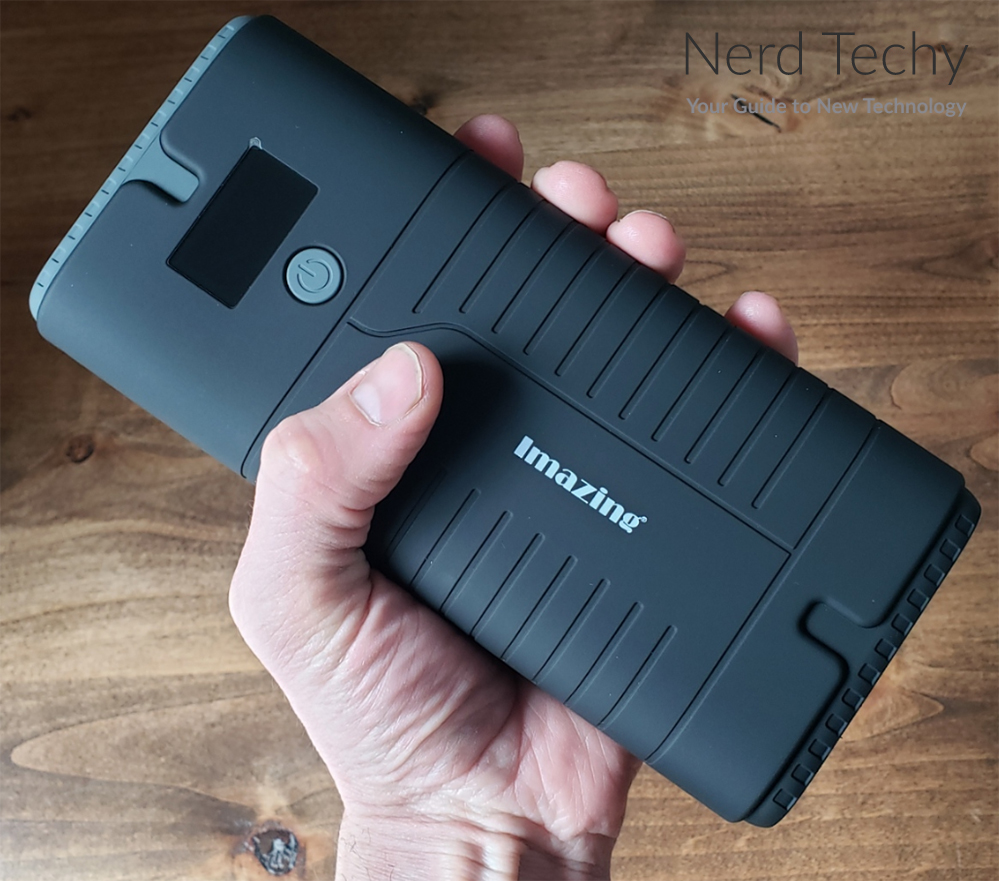 Also on the left edge of the housing is a barrel-style DC power port. All of the rest of the notable physical features are on the grey front panel. There, towards the right side of the housing, there’s a black rubber plug. This plug can be removed to reveal the socket for connecting your jumper cable leads. In the center, there’s a pair of USB Type-A ports. At the left, there’s a round flashlight lens. We’ll talk about these features more in a little bit. 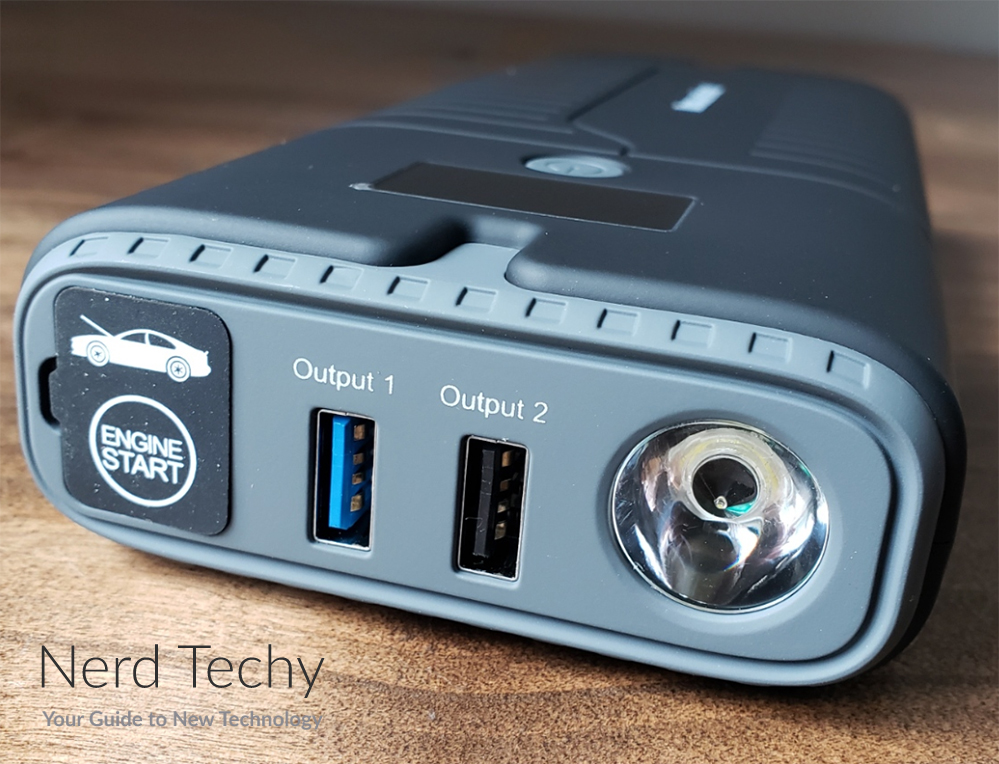 The jumper cable leads are separate from the main housing, and can be plugged in as needed. This is a Y-shaped cable, with a single plug and red and black leads with clamps on the ends. The leads are less than a foot long, which would be disappointing if these were jumper cables. But you don’t need to have much range – the IM27 is designed to be used right under your hood.

We did notice that the clamps are designed with large plastic shields in front of the teeth. This makes it harder to shock yourself by mistake while you’re attaching the cables. On the plug, where the two cables meet, there’s a small red LED display. This shows the jump starter’s current voltage, and will also display safety alerts if necessary. 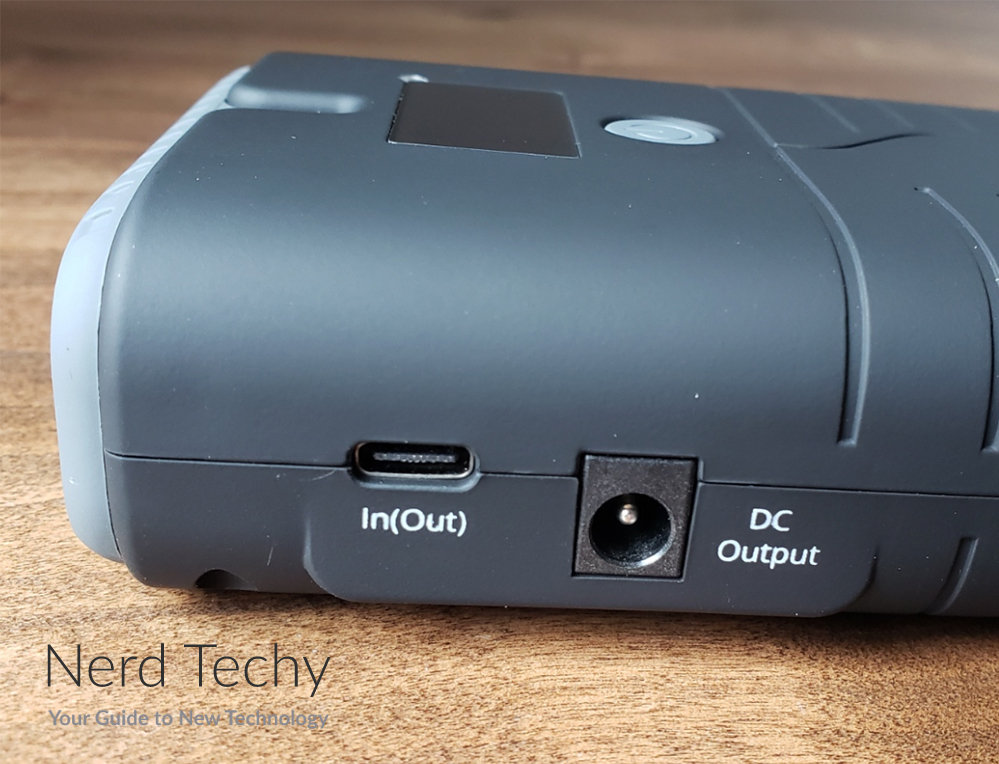 The charger and cables come with a semi-rigid zippered carrying case. This helps prevent scratches and dings while you’re on the road. Everything is covered by a two-year manufacturer’s warranty. If anything is defective or fails prematurely, you’re going to be fully protected.

If you’re looking for the most reliable possible performance, you want a capacitor-based jump starter. The Autowit SuperCap 2 uses capacitors instead of a battery, so it can function under even the most extreme conditions. It also retains its charge for years, but there are no extra features. It can’t function as a power bank, flashlight, or anything other than a jump starter.

The Imazing IM27 provides 2,000 amps of peak current, which is a significant electrical jolt. This is sufficient to jump start a gas engine with a capacity of up to 10 liters. That’s an insanely large engine, bigger than any passenger vehicle on the road. As for diesel engines, it can start up to an 8-liter engine. That’s the same size as smaller dump trucks, so most heavy work vehicles will be covered. If you’re operating a local delivery van, you’ll have no worries whatsoever. And since this is still a standard, 12-volt current, you can also start smaller engines. The IM27 can start motorcycles, ATVs, and even riding lawnmowers. 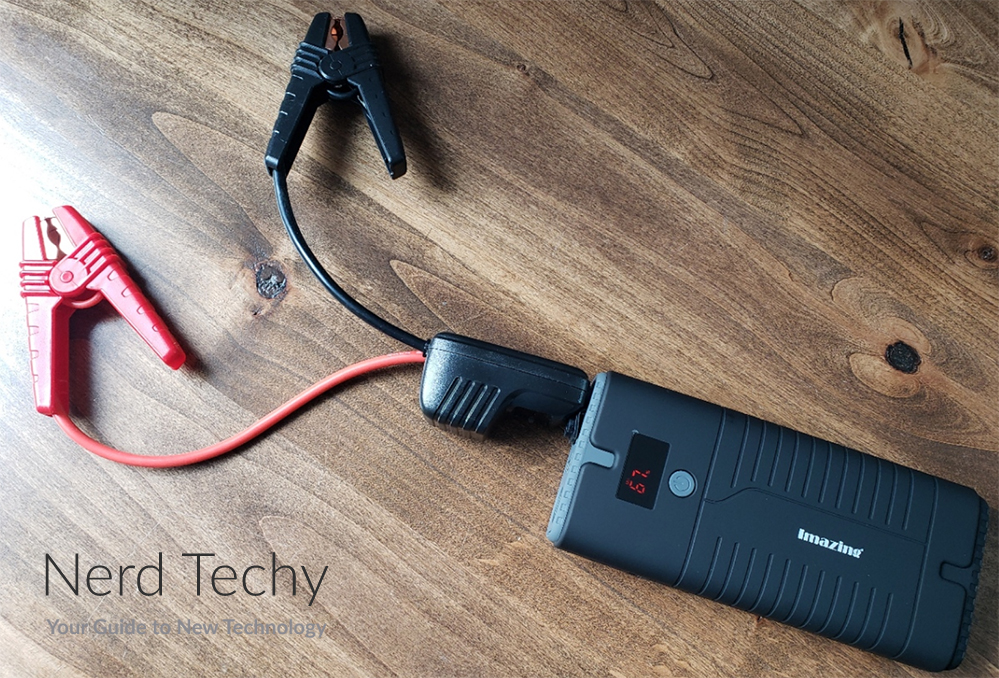 Imazing boasts that this jump starter can work up to 30 times on a full charge. That’s technically accurate, but it depends a lot on what you’re trying to jump. A little lawnmower battery isn’t going to draw nearly as much current as a diesel work truck, for example. That said, the 18,000mAh battery has enough juice to start even a very large vehicle several times. Of course, we’d recommend charging it after every use just to be safe. But if you forget, you’ll still have a reliable backup.

One drawback of the IM27 is the charging time. Even when you’re plugged into an AC wall block, it can take as long as six hours to fully charge. To be fair, that’s only if you’ve totally drained the battery, which should rarely be the case. But if you plan on using the power bank or flashlight functions a lot, charging time may be a concern. In that case, consider the Tacklife T8. It charges in only 4 ½ hours from a fully dead state, and lasts for 12 months in standby mode. That said, it’s less powerful, so it won’t be a good choice for the largest vehicles. 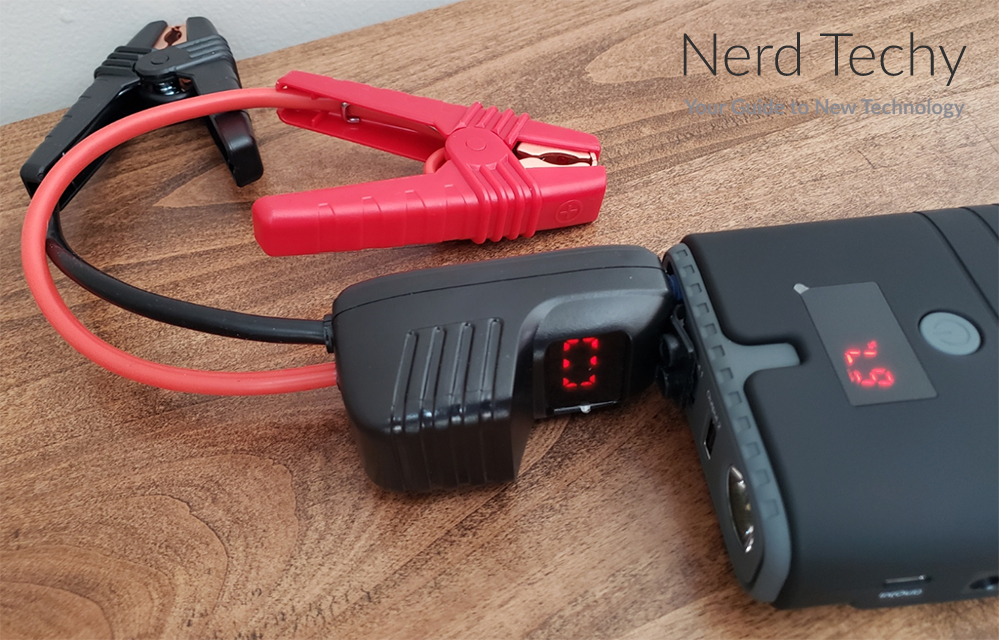 The internal battery management system (BMS) has several safety features. To begin with, there’s reverse polarity and reverse connection protection. If the clamps are connected to the wrong battery leads, the jump starter will automatically shut down. There’s short circuit protection, which keeps you safe from damaged wires or faulty car batteries. Over-charge and over-voltage protection keep your car battery safe from damage. And when you’re using the power bank function, they protect your devices as well. Over-current and overload protection keep your devices safe from sudden power spikes. And over-discharge protection keeps the jump starter battery from draining to the point where it gets damaged. 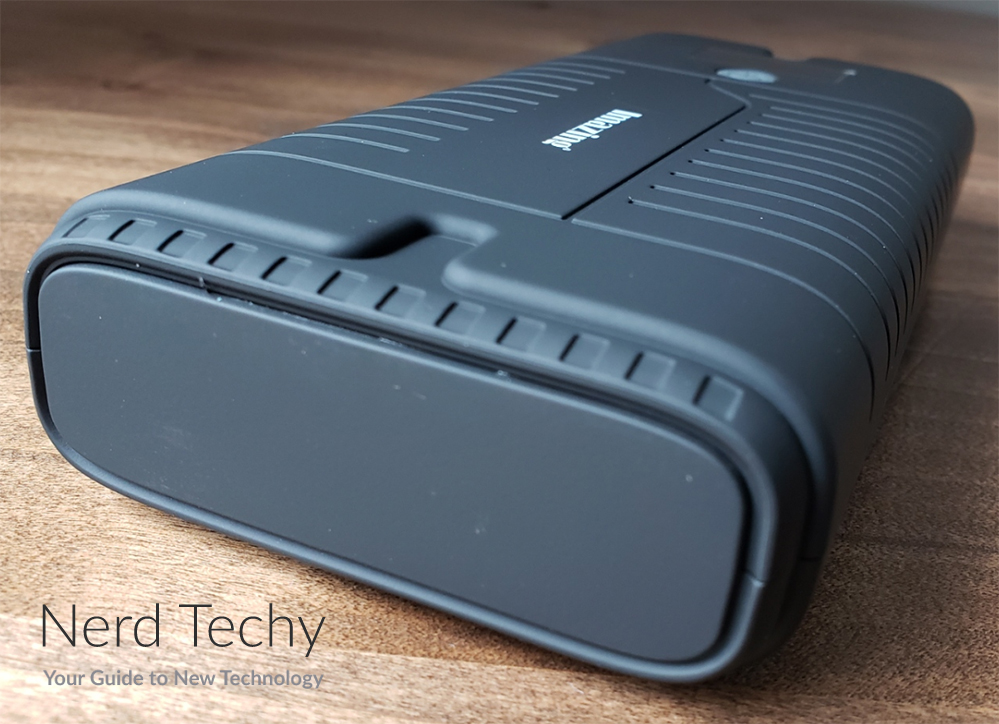 So, we’ve established that the Imazing IM27 is a reliable portable jump starter. But how well do the extra features stand up to scrutiny? To begin with, the flashlight is very bright. It casts a relatively wide beam, which limits its range somewhat. However, it’s perfect for changing tires or even hooking up the charger leads in the dark. By pressing the button multiple times, you can switch between three different light modes. Besides the standard flashlight mode, it can be set to SOS mode to signal for help. The strobe mode, meanwhile, can be used for safety on the roadside at night. 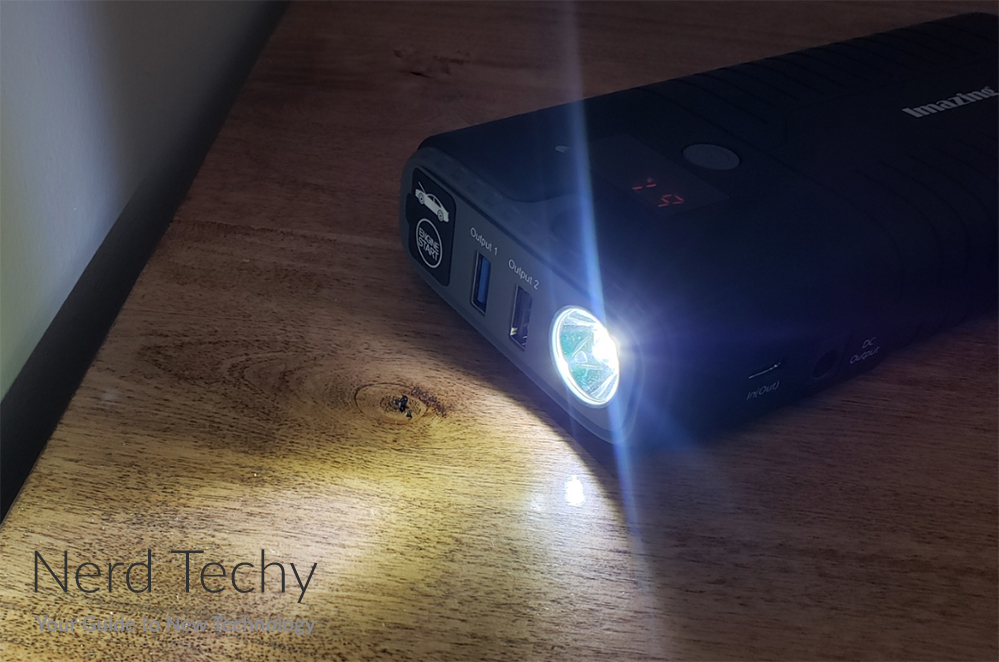 As we mentioned, the IM27 also doubles as a power bank. In this regard, it’s a bit of a mixed bag. The DC port is great for charging drones and cameras. The Type-C, Type-A, and Type-A QC ports, meanwhile, are perfect for smartphones. That said, they all deliver 12 watts of power, including the QC port. This was a bit disappointing. Type-C ports can deliver up to 100 watts with PD technology, and even QC ports can deliver up to 36. You’ll still be able to charge all your devices, but it won’t be as fast as many dedicated power banks. 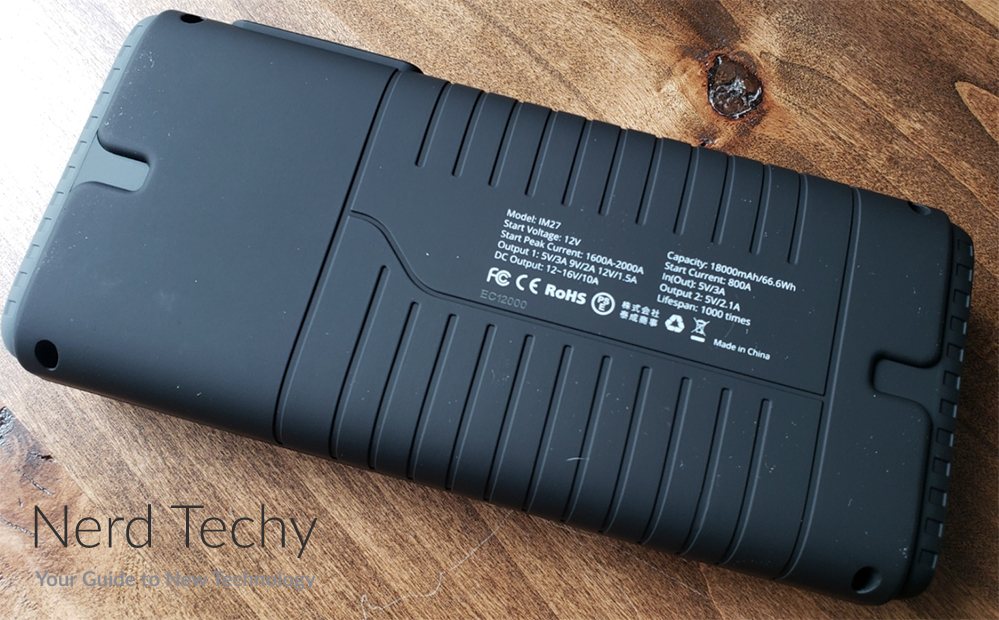 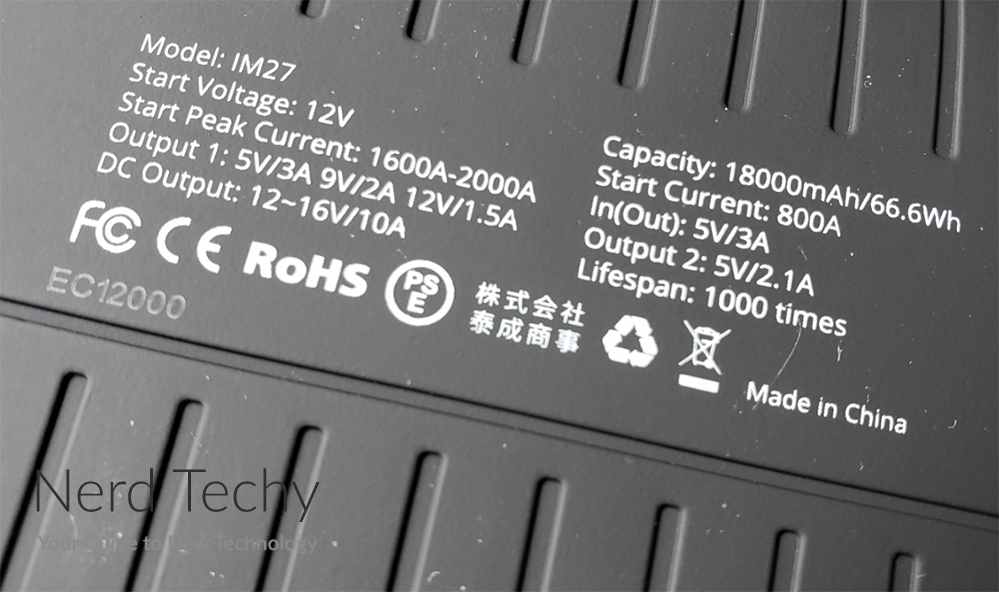 If you want even more charging capacity, there are plenty of options. Take the Fanttik T8 APEX, for example. It has many similar features to the IM27, but with a larger, 20,000mAh battery capacity. Then again, it also has slightly less starting power, so it’s less suitable for very large engines. 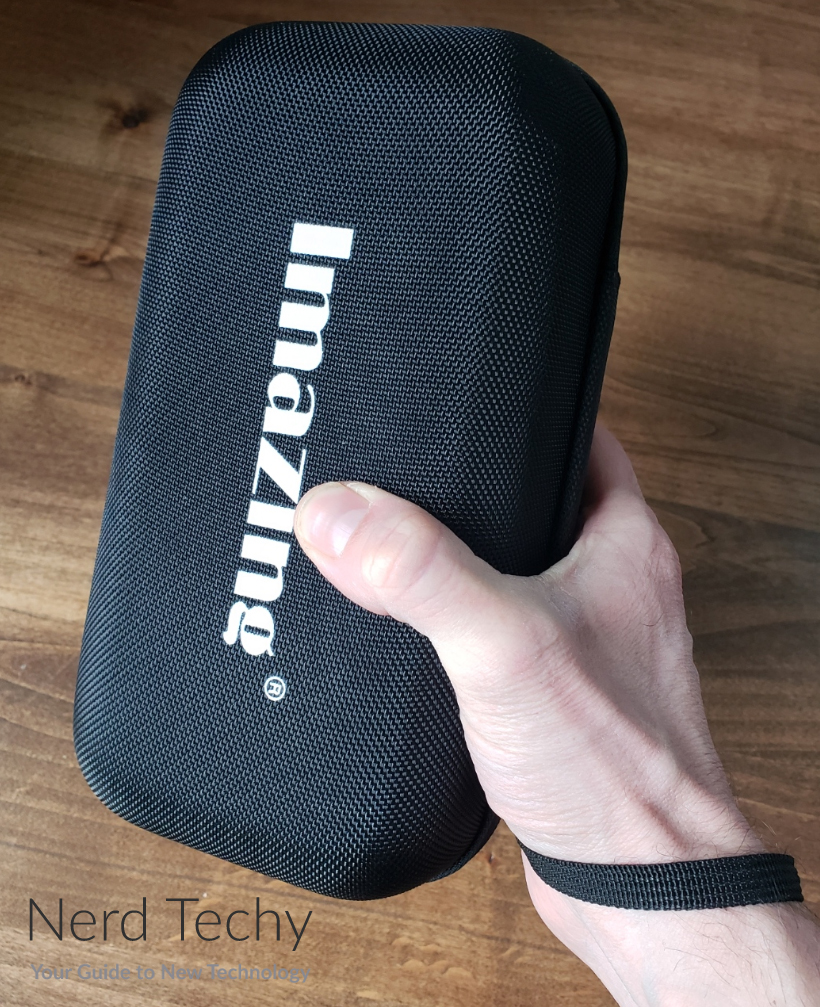 As you can see, the Imazing IM27 Portable Jump Starter is a powerful emergency starter. It can jump even very large vehicles, and it’s designed with many safety features. The flashlight function works very well. And while the power bank function is less than perfect, it still works just as advertised.