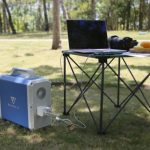 If you need a power backup system, you’re not alone. We rely on electronics for everything in our daily lives. Now, when you think of backup power in the context of a tech site, you probably think of power banks. The AC10 Portable Charger and other power banks are designed primarily for portability. On the one hand, this means you can carry them in a backpack or purse while you’re out and about. When your smartphone needs more juice, you can plug it in and top off your battery.

So far, so good. But what if you need some serious juice? For example, what if you need a CPAP machine, or your home’s power is out for 12 hours? In that case, you’re going to need a portable power station that packs some serious punch. Bluetti manufactures some of the best. Their Maxoak AC line, including the AC50 and AC100, is well-known for providing massive amounts of juice.

Today, we’ll be looking at the Maxoak Bluetti EB240 Power Station, another quality offering from Bluetti. This power station is designed for RVers and adventurers of all stripes. It can travel anywhere, and even charges via solar panels. It’s also well-suited as a backup system for your home. We’re not saying it can run all your appliances. But if you need a CPAP machine or other moderately-powered emergency devices, it gets the job done. So, is it worth buying and using? Or should you look for a different portable power station? Let’s take a closer look, and see what the EB240 has to offer! 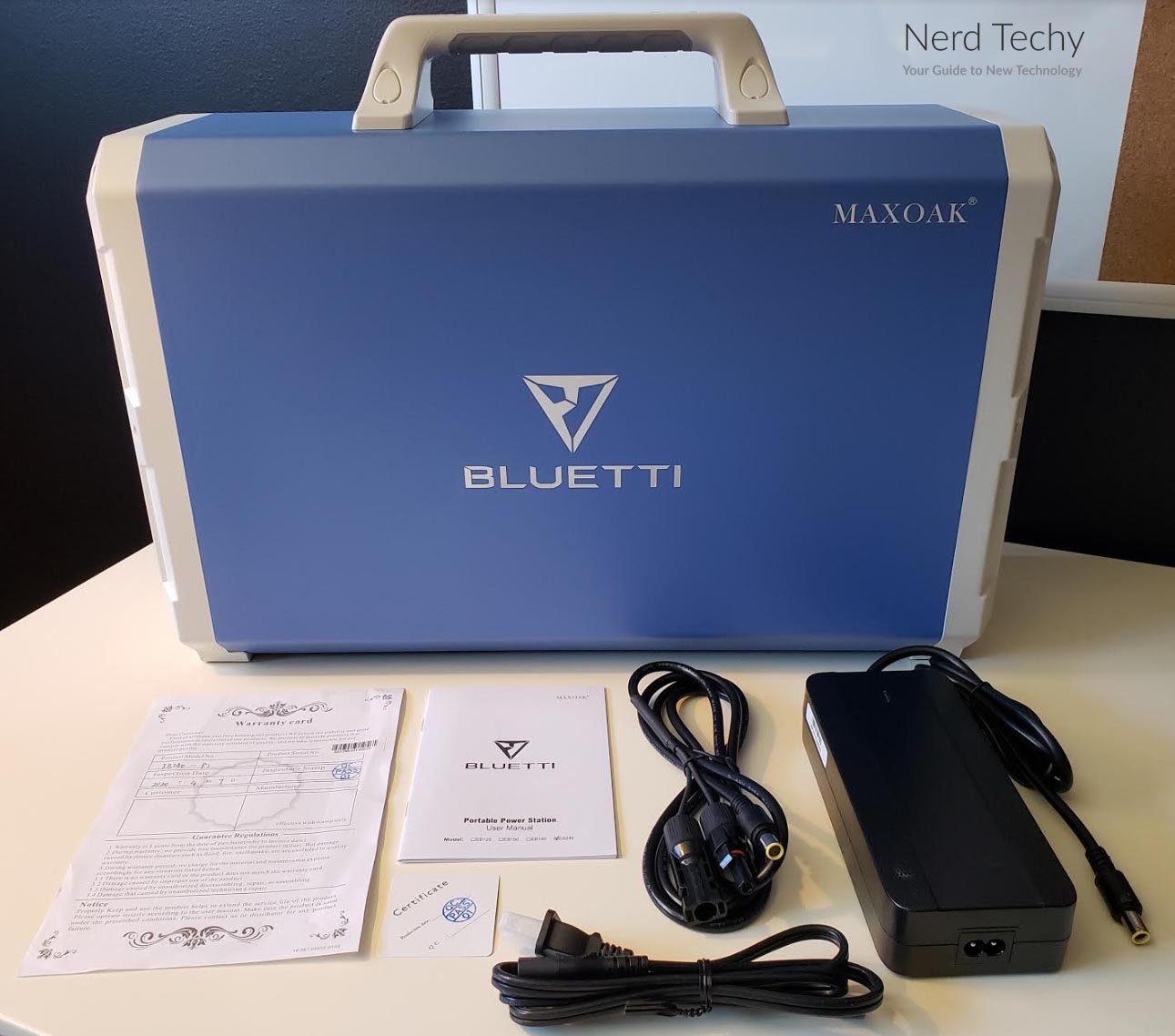 The Maxoak Bluetti EB240 Power Station is a fairly hefty animal. It measures 6.5 inches wide, 14.4 inches high, and 19.4 inches in depth. And at 48.5 pounds, it’s a bit heavy. This is a far cry from your typical, pocket-sized power bank. That said, it’s still not too difficult to move around. It has an ergonomic plastic handle on the top that’s wide enough for two hands. To be fair, this might be an issue if you have trouble lifting heavy objects. But as long as that’s not a problem, you’ll be able to move it from point A to point B. 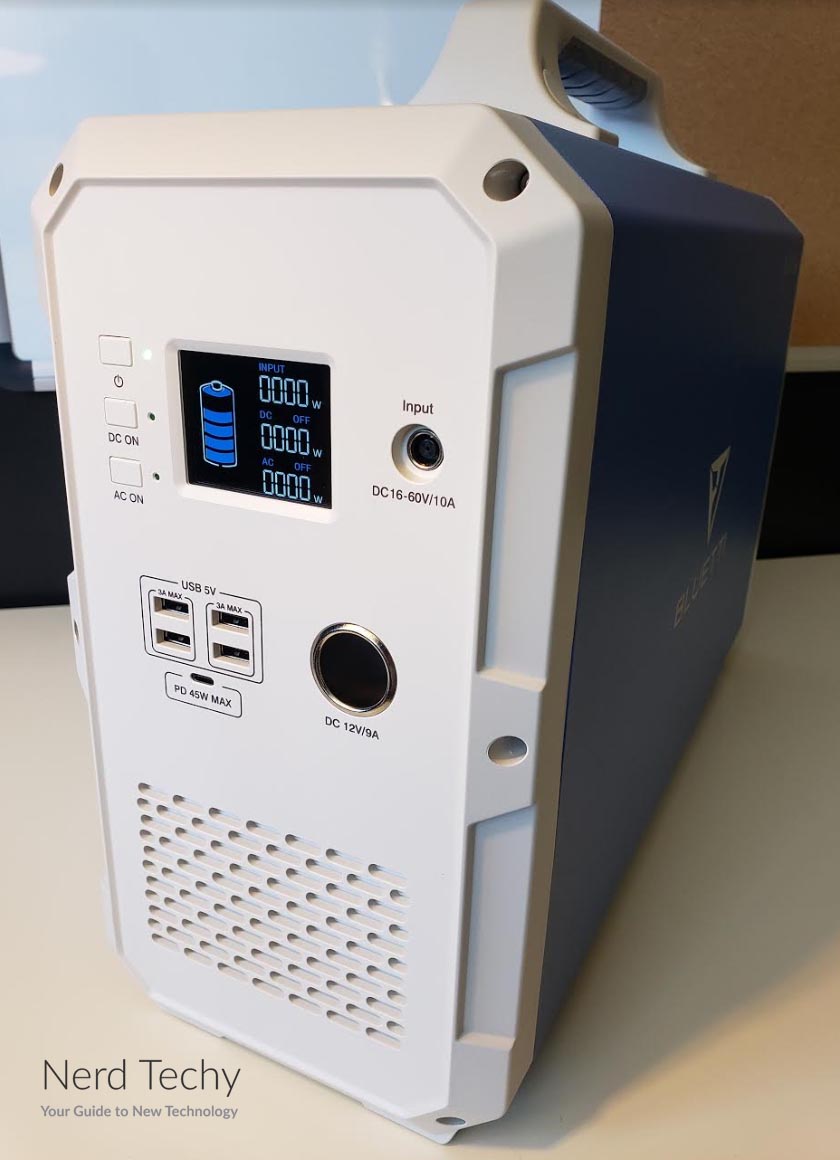 The case is constructed from a durable injected polymer, which is more rugged than most plastics. It also has a two-tone design, with a cream front, back, and top, and sky blue sides. This look evokes a sense of adventure, and is more playful than many power banks. The sides are engraved with a cream Bluetti logo, which adds another touch of extra color. The top and bottom edges are beveled , so the look is also a bit less angular than you might expect. On the bottom, a set of rubberized feet keep the frame elevated about half an inch from the ground. These feet are safe for any surface, and won’t slip or scratch your floor. 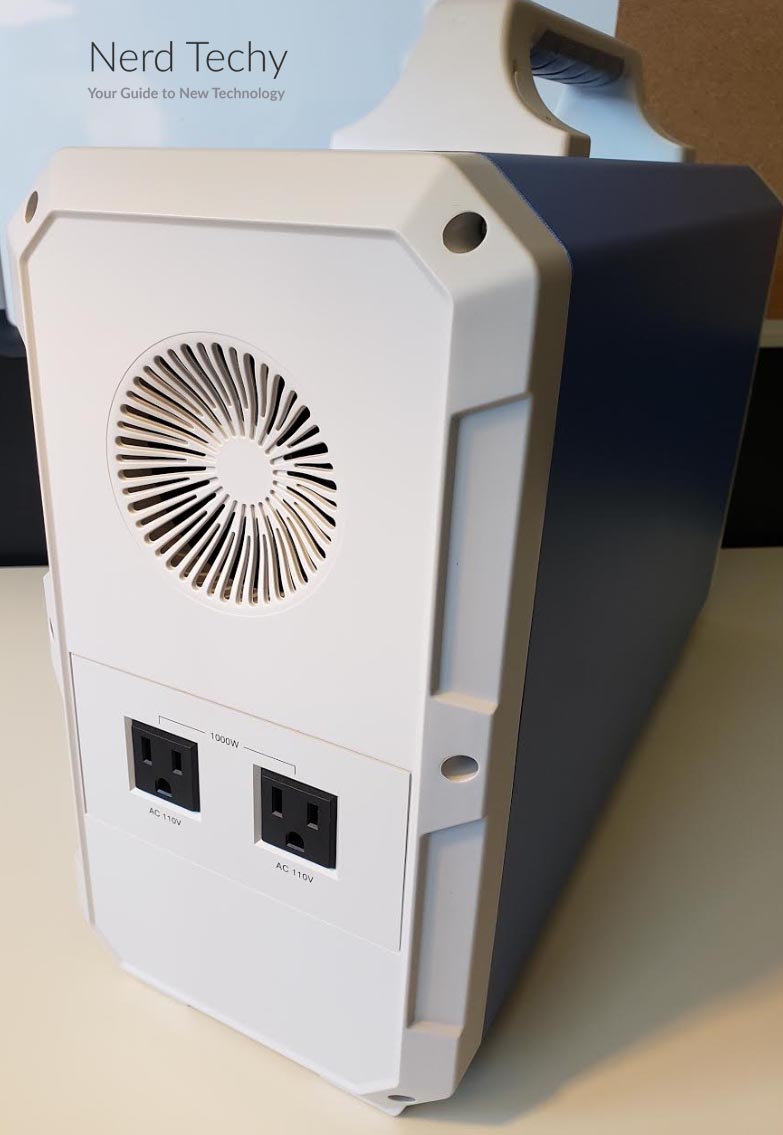 On the back, there’s a large circular vent, much like you’ll find on a desktop PC. There’s also a rectangular vent on the front, allowing for easy air flow through the machine. The fan itself is located in the back, and produces a moderate hum when it’s running. At low power draw rates, it remains off, because it’s not necessary. That said, it will kick in when the power station reaches a few thresholds. Specifically, it will activate if the 12-volt socket draws 80 watts or the inverter load exceeds 400 watts. It will also activate if the power load exceeds 100 watts. Essentially, if you’re just charging a cell phone or laptop, the fan remains off. For anything more demanding, it will kick in. Even so, it’s quiet enough that it won’t interrupt your sleep when it turns on. 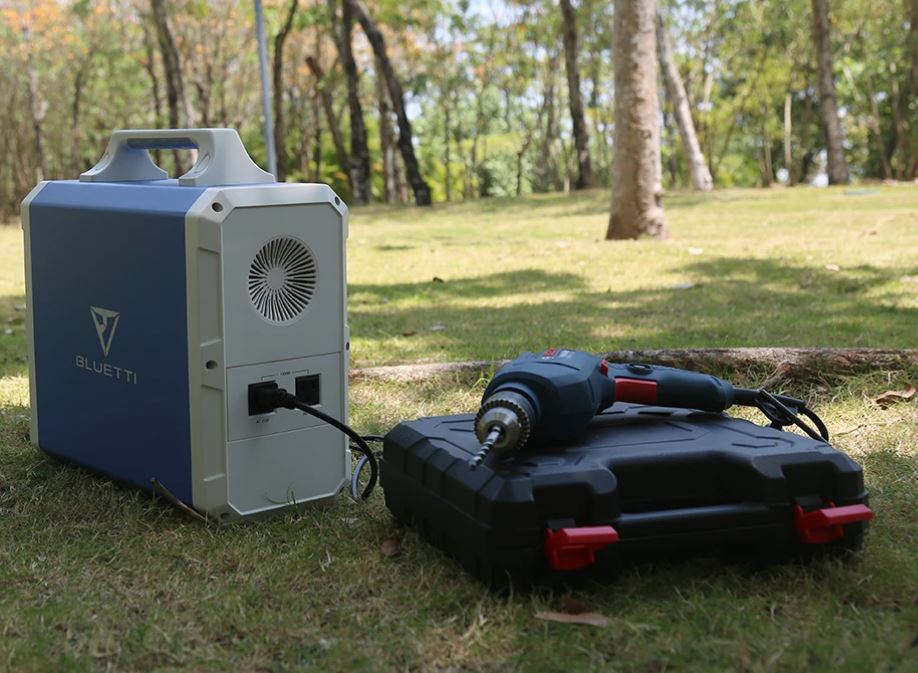 Beneath the rear cooling vent, you’ll also find an input port for charging the internal battery. You get three different accessories to help you out. First off, there’s a standard AC adapter, including a charging block and two-prong cord. Also, there’s an MC4 solar panel adapter. All three of these adapters plug into the same proprietary jack, so charging the EB240 is very easy. Underneath, there’s also a pair of three-prong AC plugs for connecting AC-powered devices.

The front of the EB240 is where you’ll find the rest of the connections. There’s a small panel with four USB Type-A ports and a USB Type-C port. This provides added compatibility for most devices. Above the power ports, you’ll see a blue LCD display that gives you a readout of the EB240’s status. It will tell you the current charge level of the battery, so you won’t unexpectedly run out of juice. It will also tell you how much power the EB240 is currently supplying. As long as you’re paying attention, you won’t have to worry about drawing excessive power. And a set of control buttons allows for easy operation, so you can view more advanced options if needed. 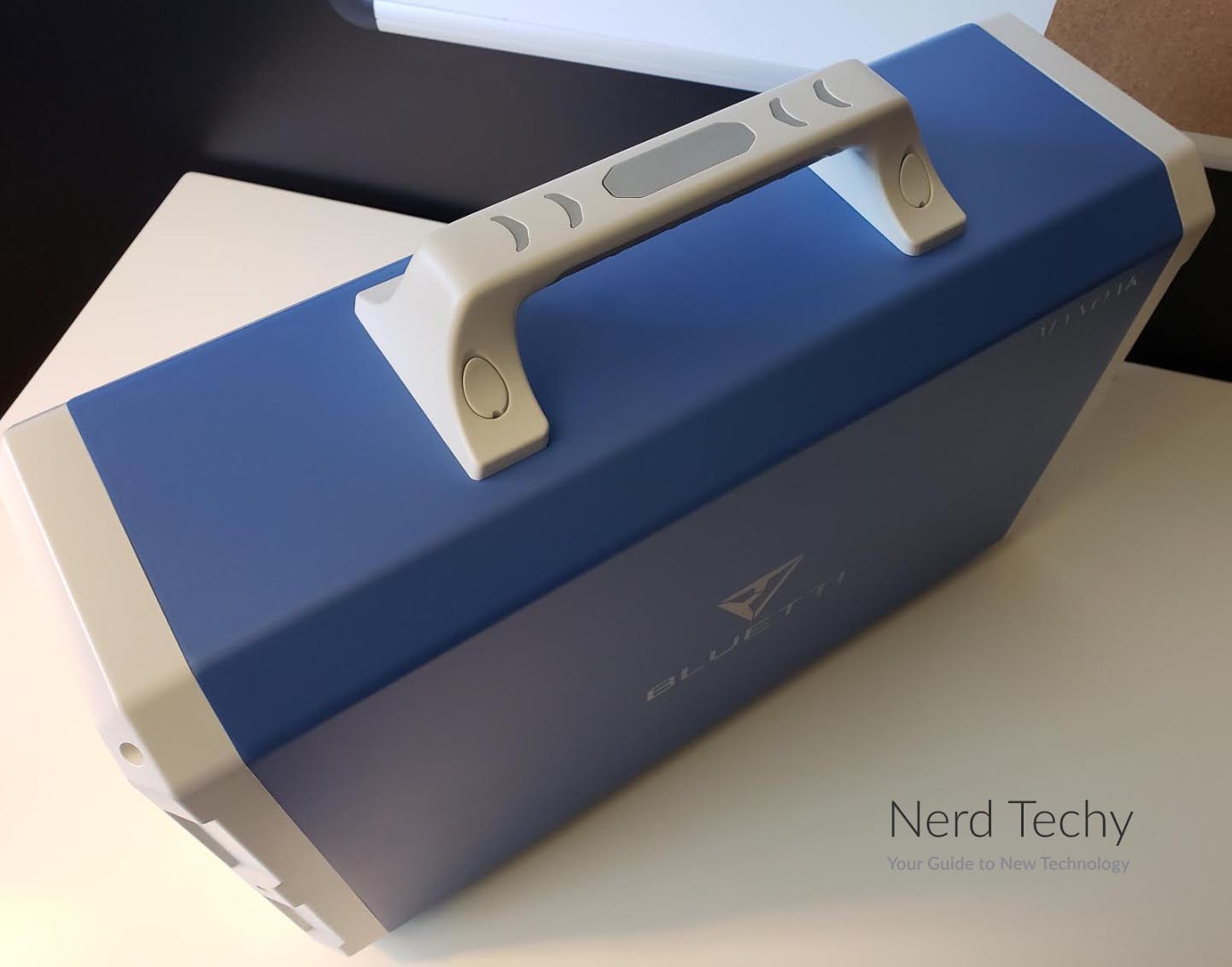 The EB240 is protected by a 12-month manufacturer’s warranty. At first, this might seem a bit short for an expensive power station. However, keep in mind that if electronics are going to fail, they almost always do so within the first year. Essentially, if your power station doesn’t fail during the warranty period, it should last for many years.

The EB240’s battery has an impressive capacity. In total, it holds a charge of 648,648mAh. Let’s put this number in perspective. That’s enough to recharge a mid-sized MacBook as many as 34 times. It’s enough to recharge your iPhone over 250 times. You can even run an average CPAP machine for 34 hours. That’s four nights of sleep, with a few hours left over. Obviously, if you’re using the EB240 for all three purposes, your battery will drain faster. But even so, you’re looking at one of the highest-capacity power stations on today’s market. 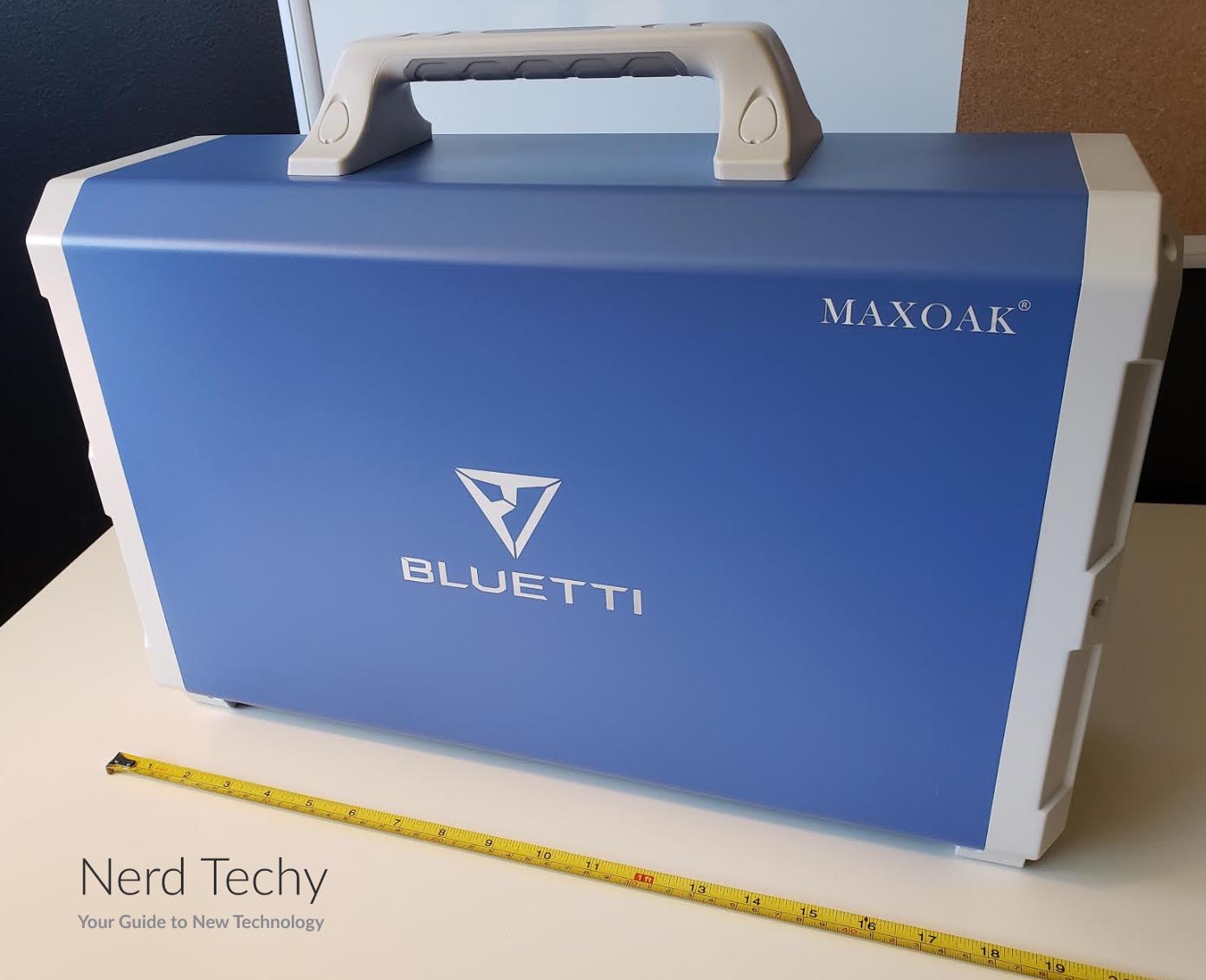 The maximum power load is similarly robust. In total, you can draw up to 1,000 total watts simultaneously. This is sufficient for powering a CPAP machine or mini fridge, but not much else. In other words, if you have one of these devices connected, your other options will be limited. That said, the EB240 can support up to a 1,200-watt draw for up to 2 minutes. It isn’t a good idea to abuse this, but it works for compressors and other devices with high startup wattage. The motor kicks in, the wattage spikes, and it quickly returns to normal. As long as the spike in wattage is relatively brief, it’s a non issue. However, if it exceeds 2 minutes, the breaker will trip, and you’ll have to reset the EB240. 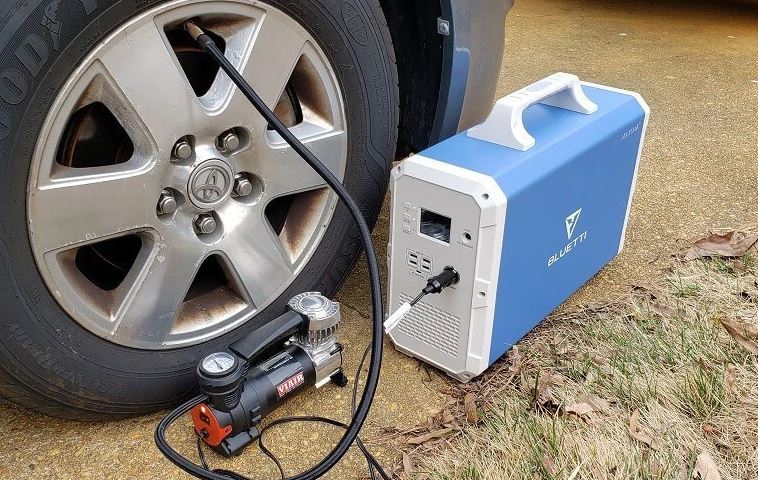 Charging is relatively easy. With the AC charger, you can fully charge the battery in about 15 hours. This is the preferred method, particularly if you’re using the EB240 as an emergency backup. Keep in mind, though, that batteries will drain over time in storage. Bluetti recommends charging the battery every 3 to 6 months to maintain peak performance. 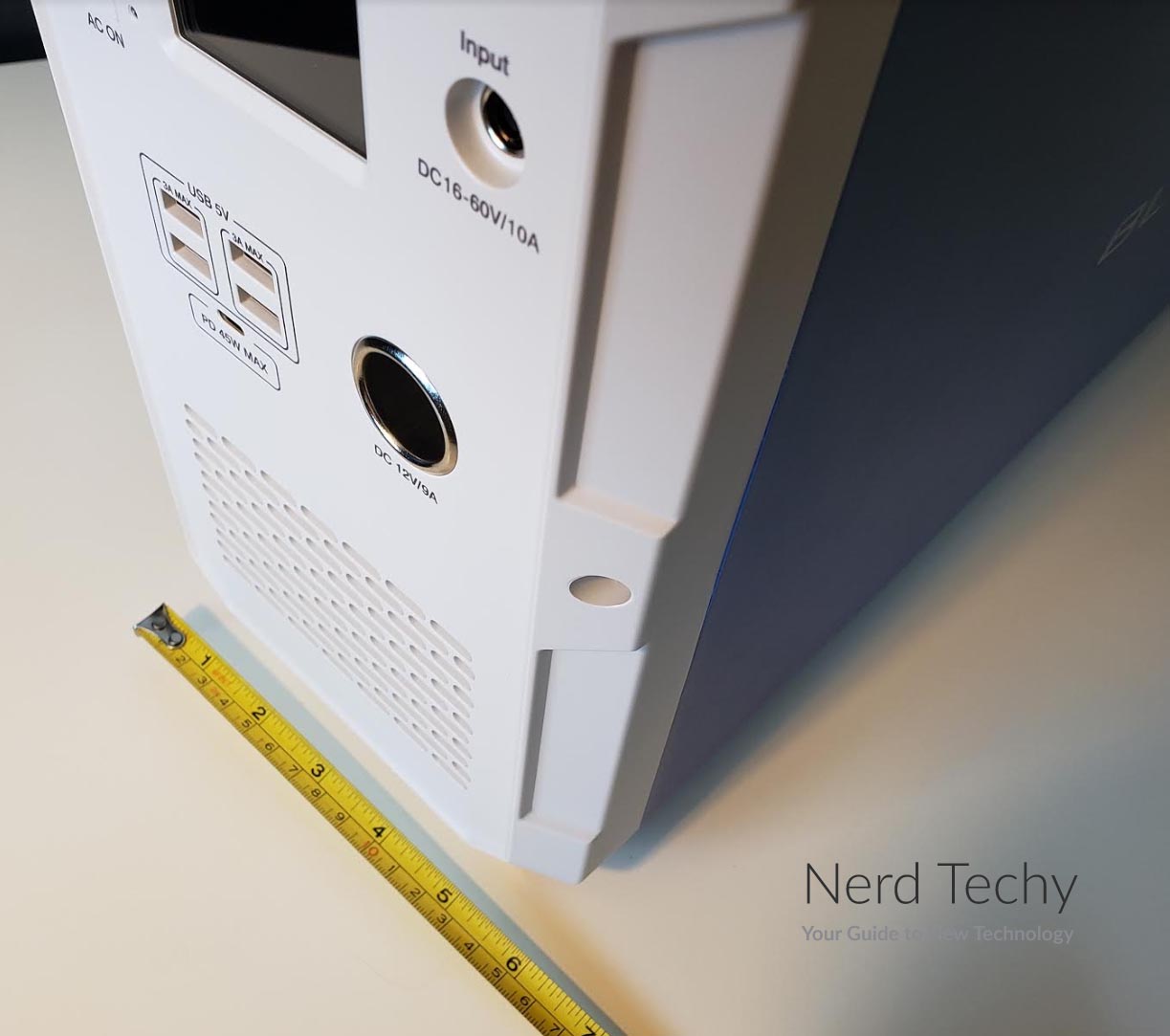 In addition to multiple charging options, you also get a full suite of protection features. A built-in battery management system protects you from overcharging, over-discharging, and short-circuiting. It also protects you from damage due to high temperatures. If for some reason the unit gets too hot, it will automatically shut off to avoid damage. 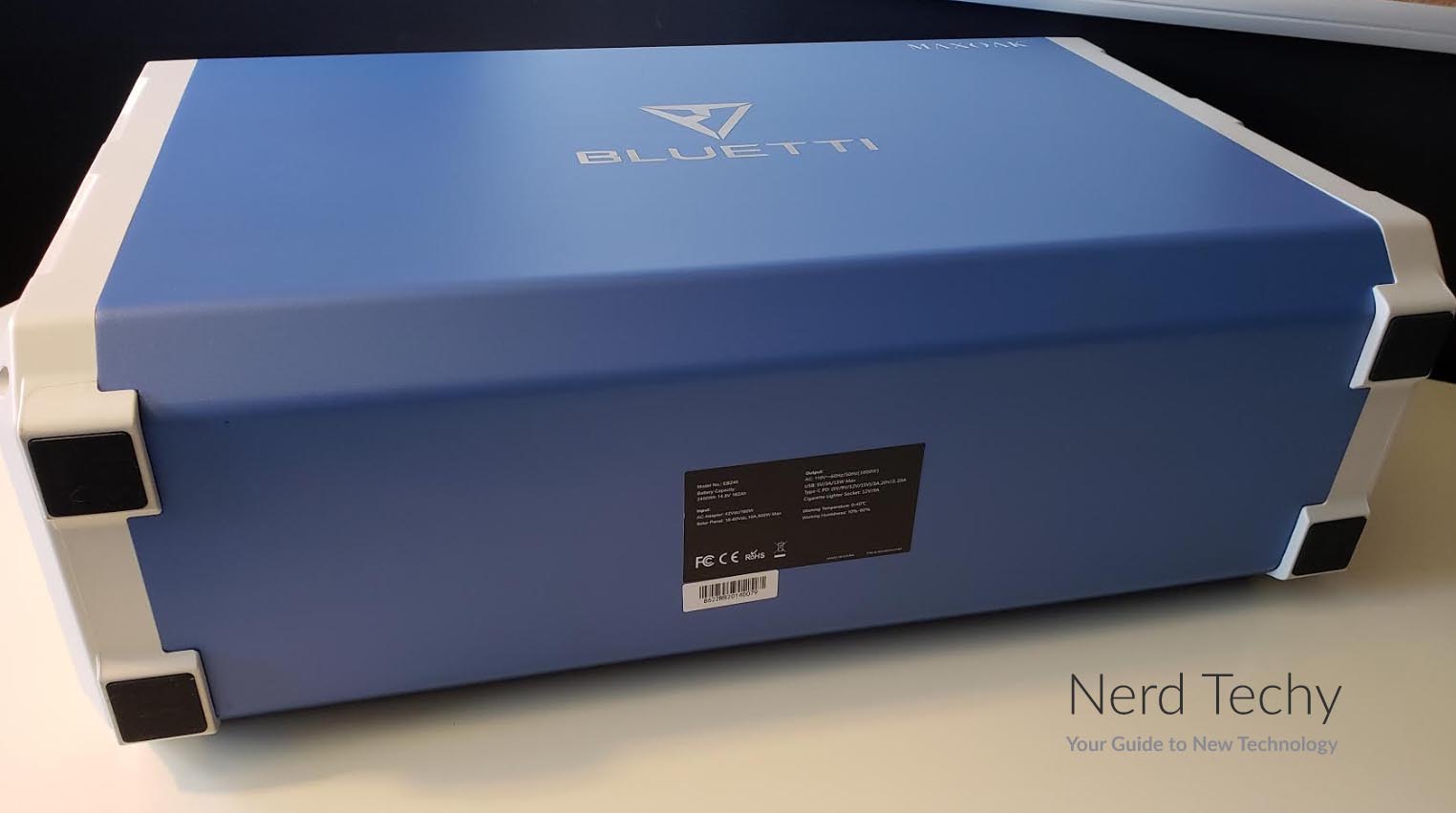 The rear AC outlets are the EB240’s main feature. With enough power to run most small household devices, they provide an excellent backup. This is particularly true if you rely on a CPAP or other medical device for your own health. These outlets can also be used for drones, laptops, and other devices. As long as it draws 1,000 watts or less, you can plug it into the EB240. The 12-volt port is useful for automotive accessories. You can run a tire pump or a mini vacuum without the need to turn on your engine.

The USB ports add another element of versatility. The USB Type-C port supports PD power, with a maximum wattage of 45 watts. This allows you to quick charge smartphones and other USB Type-C devices. The four Type-A USB ports deliver 15 watts. This isn’t enough for quick charging. But it’s more than good enough for standard charging, as well as for charging low-voltage devices. 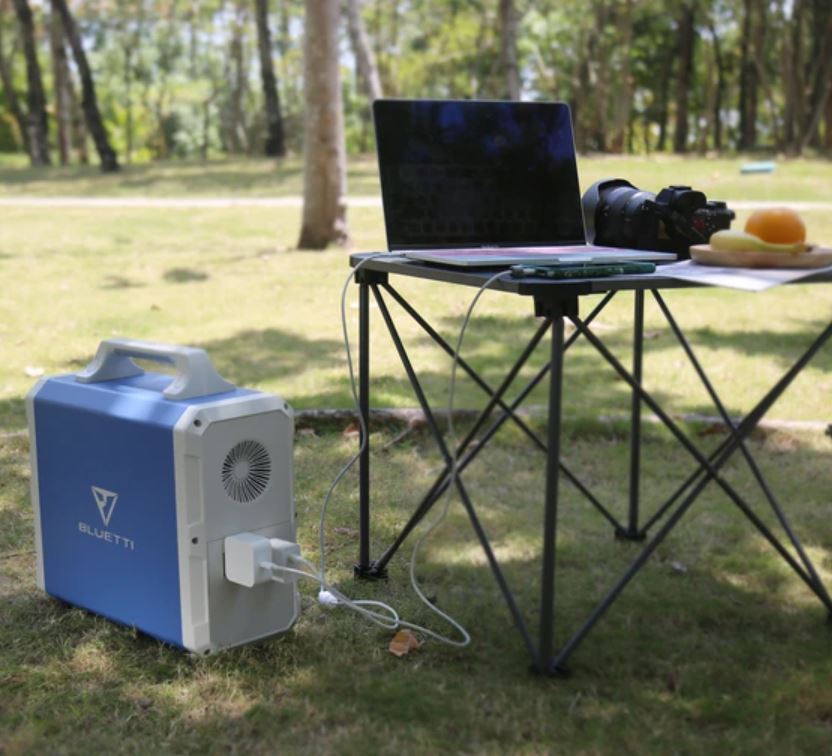 At the end of the day, the Maxoak Bluetti EB240 Power Station is one of the most powerful chargers available. With 648,648mAh of total power, you’re looking at a truly massive battery. To be fair, this amount of juice comes with a lot of size and weight. But if you need a reliable, powerful supply of backup power, it’s well worth the added bulk.

The physical design is very well constructed. The case is attractive to look at, with a convenient carrying handle. The rubberized bottom skids mean you can set it just about anywhere without worrying. Similarly, you can charge from just about any source. Whether you need AC power, DC power, or you’re using solar panels, you’re well-equipped. Better yet, the EB240 has a full set of all the safety features you’d expect from a quality power station. All in all, it’s one of the best in its class.