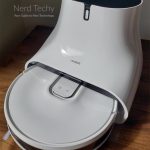 If you’re trying to outfit your home with all the latest devices, it’s tough to do better than a robot vacuum. Unlike a conventional vacuum, a robot vacuum cleans your house automatically. Instead of touching your vacuum every few days, you can touch it every few weeks, instead. This might not sound like an impressive use of technology. It’s certainly not as exciting as a game console or the new iPhone 13. But one of the biggest benefits of most technology is time savings. Think about how much time your bank app saves you, compared to calling your bank. By the same token, a robot vacuum saves you time, so you can spend more time on things you like.

If you haven’t shopped for robot vacuums in a while, you might need to adjust your expectations. Older robot vacuums weren’t all that smart. They would sort of wander around randomly for awhile, then return to their base. If you were lucky, you’d get a magnetic strip you could use to block off a doorway. That was about it. But modern robot vacuums have a lot more to bring to the table. You should look for advanced mapping features, with a smartphone app for scheduling. You should also look for more suction power than you used to get.

Now, we’re going to review the Neabot NoMo Q11. This is a powerful robot vacuum that can handle a wide variety of messes and surfaces. It has a built-in mop as well as functioning as a vacuum, and it can navigate over most transitions. The app is easy to use, and provides you with plenty of ways to customize your vacuuming routine. But that’s just a few of the things we need to be looking for. To get a complete picture, we’ll need to look at all aspects of the vacuum. We’ll need to talk about the physical construction, as well as the battery life and the mapping features. With all of those things accounted for, we’ll have a complete picture. Let’s see how this robot vacuum stacks up! 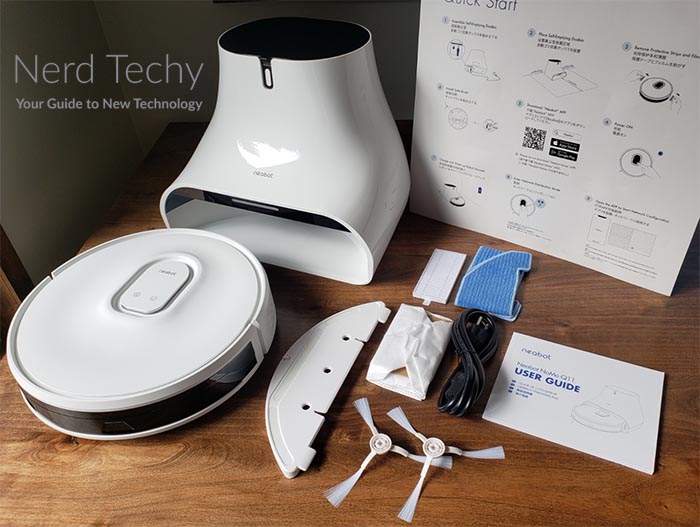 The Neabot NoMo Q11, like most robot vacuums, is disc-shaped. It’s constructed from white ABS plastic, which has a glossy, easy-to-clean finish. The shape isn’t perfectly regular, since the top is recessed, and there are raised outer bumpers. The bumpers aren’t strictly necessary, because of the mapping functions. However, it’s still nice to know that the vacuum is resilient to accidental kicks and bumps. Not only that, but the top of the housing is also durable. You wouldn’t want to step on it, but minor dings and bumps won’t damage it. 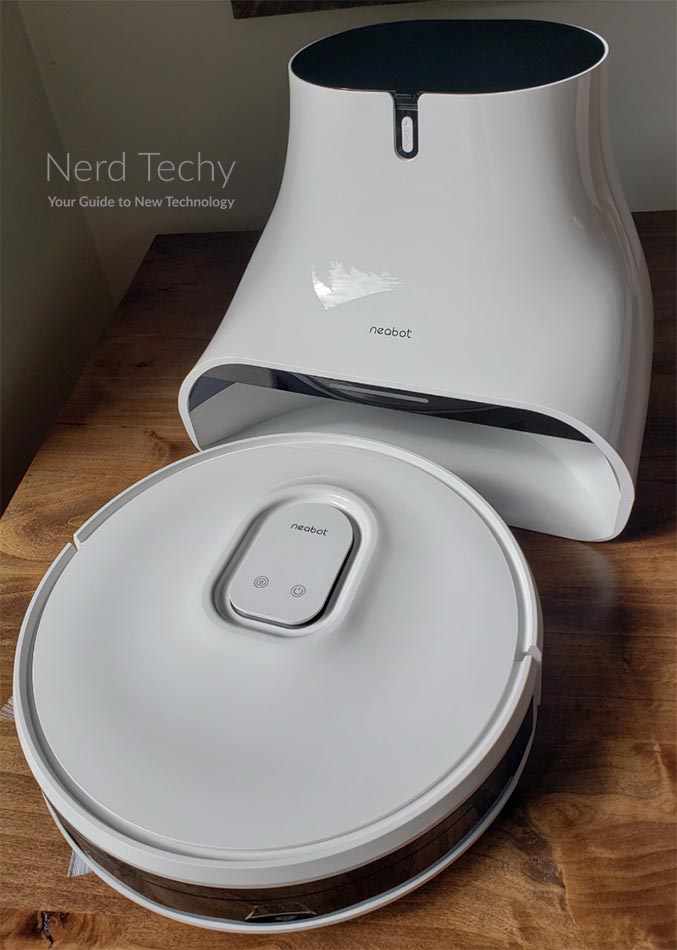 Our only minor quibble about the design is that it’s fairly thick. At 3.4 inches, it might not fit under some lower furniture. If you prefer a slimmer vacuum, why not take a look at the Ultenic D5S Pro? It’s only 2 ¾ inches high, but it’s not as powerful as the Neabot. 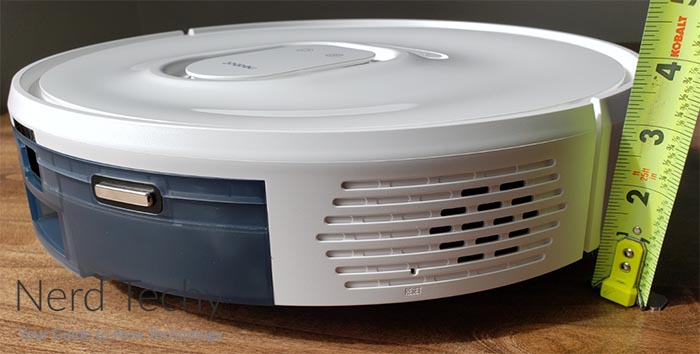 In the center of the top panel, there’s an oblong cutout with an LED light ring. In the middle, you’ll find the vacuum’s only two physical controls. The right soft touch button has a power icon, and starts a new cleaning cycle. The let soft touch button has a power icon, and sends the vacuum back to base. There are plenty of other controls available, but they’re in the app, so we’ll discuss them later. The only other cosmetic feature on the top of the vacuum is a silver-grey Neabot logo, above the two buttons. 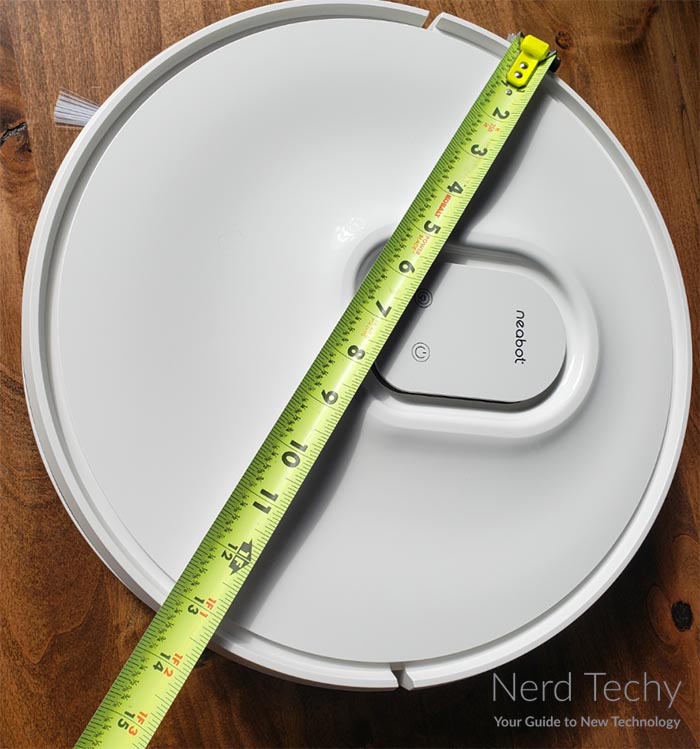 The main feature on the bottom of the housing is the large roller brush, which is mounted in the center. This black, wavy brush does the bulk of the work, collecting debris from carpets and floors alike. It’s also removable – when it gets tangled with hair, you can pop it out and detangle it with ease. To the right, there’s a single horizontal brush that sweeps out wide to the side. This brush is made to draw dirt and dust in from a wider area, extending the vacuum’s reach. It works well on solid floors like hardwood and tile. It doesn’t do much on carpets, but then again, it doesn’t hurt anything either. 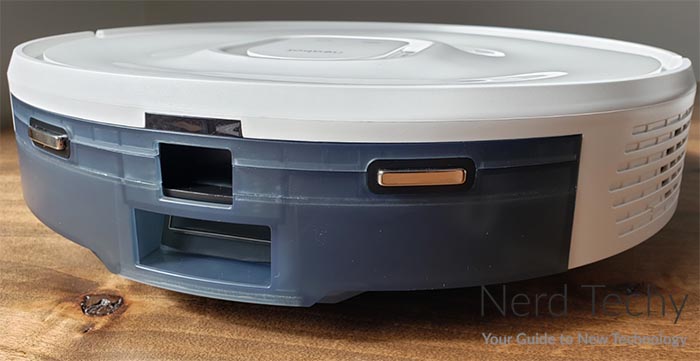 On either side of the main brush, there are a pair of large, knobby wheels. They’re capable of crossing large transitions, as high as 2cm, or 0.787 inches. That’s more than ¾ of an inch, so you can cross almost any transition in almost any house. At the front of the bottom, there’s a third, smaller wheel, mounted in a rotating housing. This wheel is un-powered, but the housing itself is powered, and rotates to steer the vacuum. At the back, behind the roller brush, there’s an area for attaching the mopping pad. 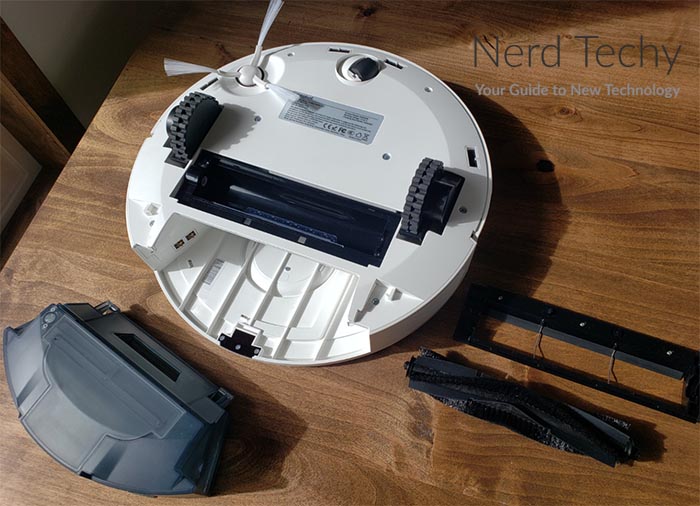 The Neabot’s charging base is a bit larger than you’ll find on most robot vacuums. That’s because it also serves as a dump for the self-emptying function. We’ll go into more detail on that in a second, but the point is that the base is big. You’ll want to put it somewhere out of the way, such as a laundry room, or it’s liable to get in the way. This is especially true when the vacuum is in place, and sticks out even further. 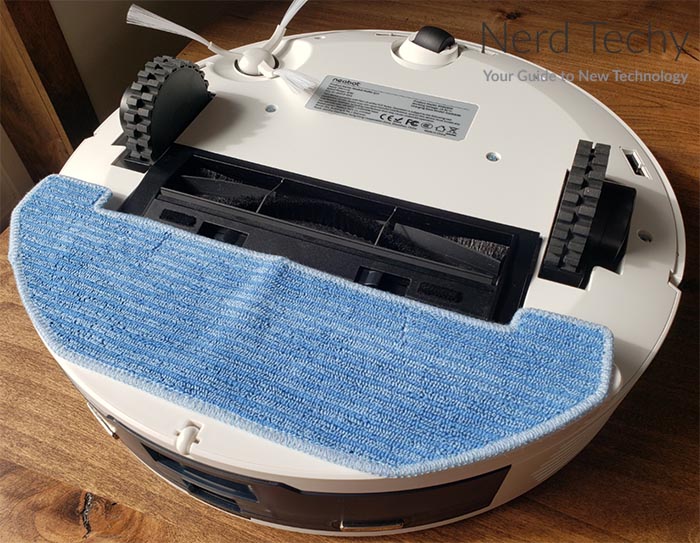 The Neabot NoMo Q11 is capable of producing up to 4,000 Pascals (Pa) of suction. By comparison, most robot vacuums produce somewhere in the neighborhood of 2,000Pa of suction. As a result, this vacuum can handle jobs most other robot vacs can’t, such as medium pile carpet. At the same time, keep in mind that we’re talking about robot vacuums. They aren’t as powerful as other types of vacuums. For example, the average upright vacuum produces around 14,000Pa of suction. But for most people’s purposes, 4,000Pa is all you’re ever really going to need. 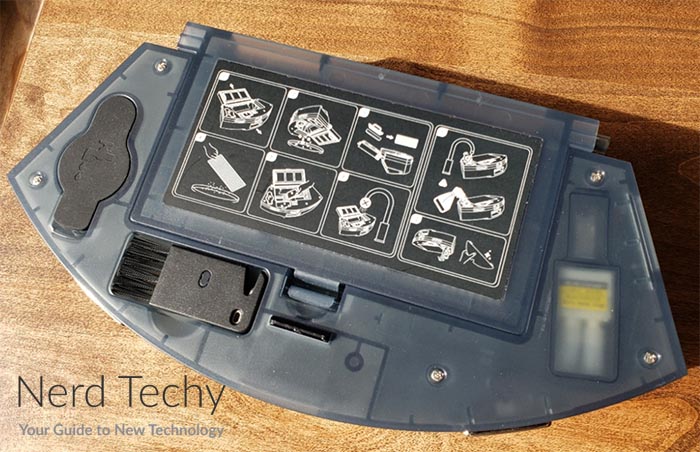 On the highest power setting, the Q11 produces approximately 65dB of noise. That’s quieter than most vacuums, and it’s not terribly obtrusive while it’s going around the house. You may need to raise your voice a little when it’s in the room, but that’s about it. If it’s running at a lower setting, you’ll experience a correspondingly lower volume. That said, the vacuum responds to commands with voice responses, which are initially very loud. If you’re in the other room, you can still hear and understand the responses clearly. Thankfully, there’s an option to lower the volume, but you can’t turn them off altogether. Worse, there are sometimes updates in the middle of the night, and you’ll get a voice alert when that happens. 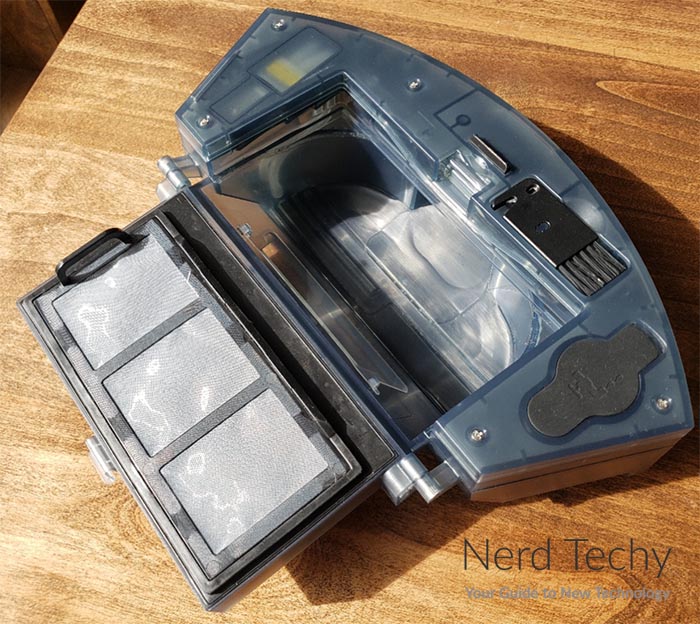 In addition to functioning as a vacuum, the Q11 is also a fully-functional mop. It can mop at the same time as it vacuums. This means you can clean up larger debris before the mop head passes over it. As a result, the mopping pad won’t get dirty as fast as it otherwise would. The water tank has 300ml of capacity, which is enough to clean several hundred square feet. Not only that, but the mopping pad is a washable microfiber. When you need to clean it, just throw it in the washer. 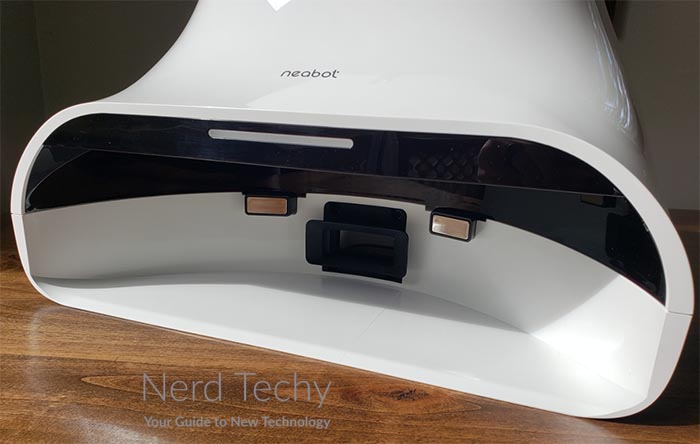 The internal battery takes about six hours to fully charge. When the battery is full, you’ll get about one to two hours of use, depending on conditions. The battery will last longer on solid floors, and run out faster on carpets. Either way, the performance is pretty good – much longer than most robot vacuums. 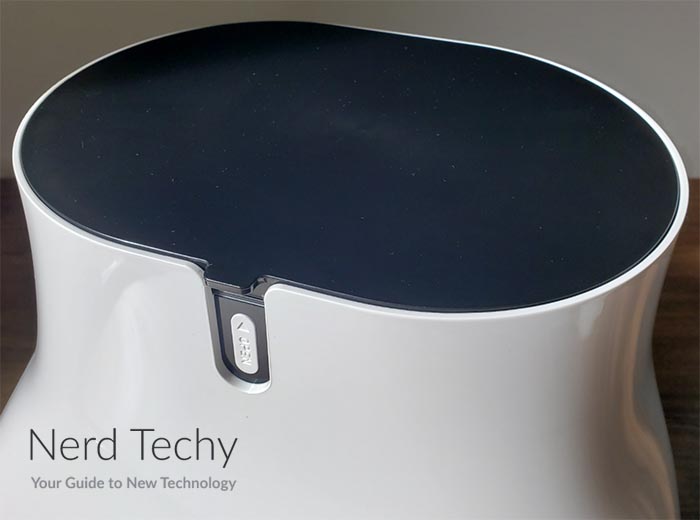 Then again, it’s always possible to improve, and the Ultenic T10 is proof of that. Like the Q11, it’s self-emptying, but it also runs for up to 4 ½ hours on a charge. On the downside, it’s expensive. 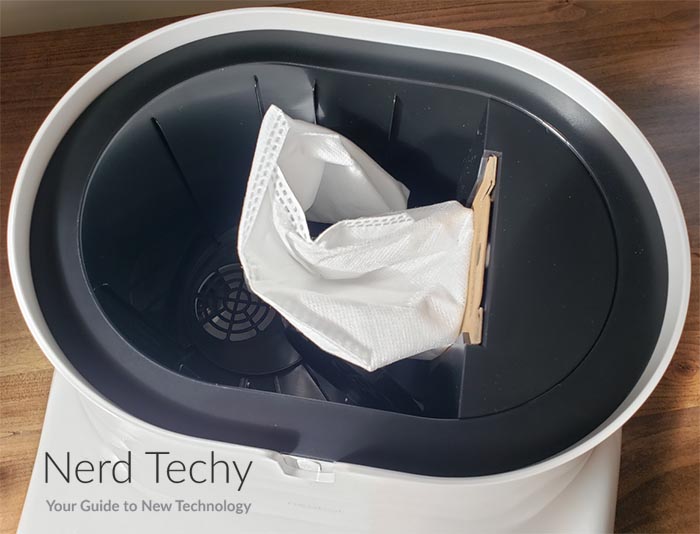 To use the Neabot NoMo Q11, you’ll first need to download the Neabot app. Once the app is installed, turn on the vacuum, and connect to it with your phone’s Bluetooth. At that point, you’ll be prompted to set up the internet connection. An internet connection is not strictly necessary to use the vacuum. You can also connect via Bluetooth any time you’re within range. But if you want to remotely access the Q11, you’ll need to set it up on your home’s WiFi network. 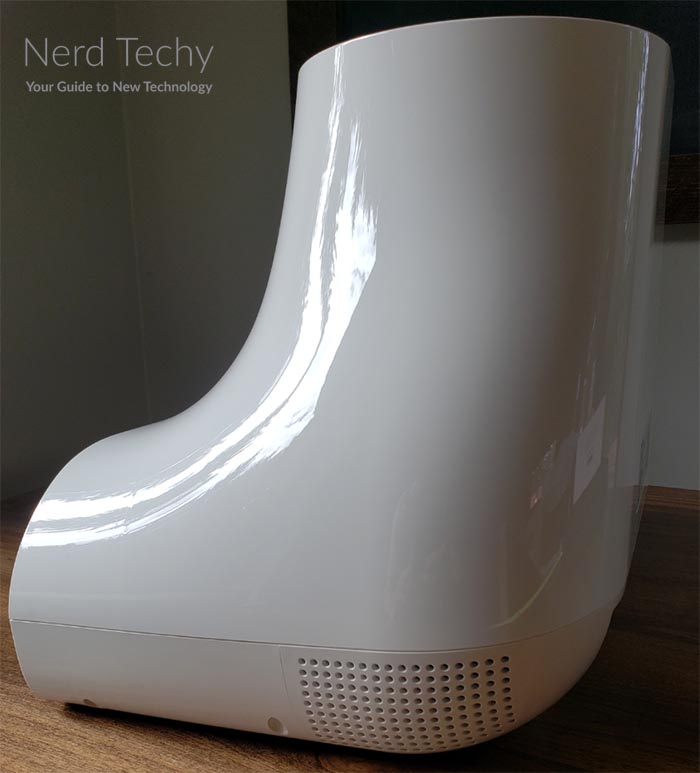 When you run the vacuum, it will first roam around the house seemingly at random. At this time, it’s just mapping your home, and identifying any obstacles. Once it’s done, the map will be stored in memory. Sadly, it doesn’t vacuum in a methodical fashion, and appears to just wander randomly within its limits. That said, you can use the map to set those limits, and determine what areas of your home get cleaned. You can set no-go zones, and schedule different rooms to get vacuumed on different days. All in all, the app works very well. But the vacuum would be more efficient if it moved in a regular pattern. On the plus side, the app can store up to three different maps. If your home has multiple stories, you can manage all of them at once. 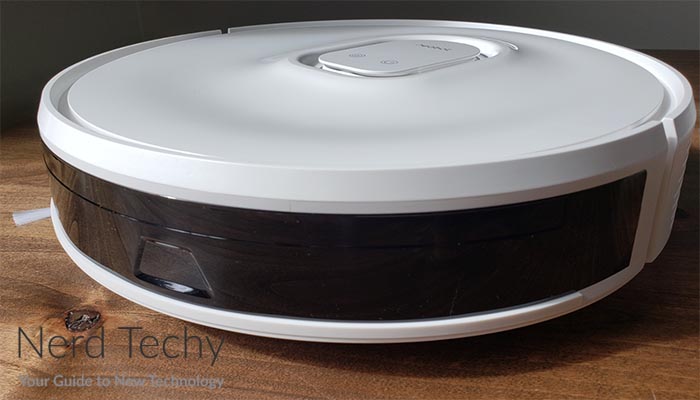 When the NoMo Q11 gets full, it will return to base to empty itself. The base has an internal square dust bag with a capacity of 2.5 liters. This is enough for around 30 days of cleaning, depending on how much you vacuum. Not only that, but the base has an internal HEPA filter, so the expelled air is clear and fresh. If you want to change your bag even less, the Dreame Bot Z10 Pro’s base holds a whopping 4,000ml. On the downside, it’s a bit pricey. 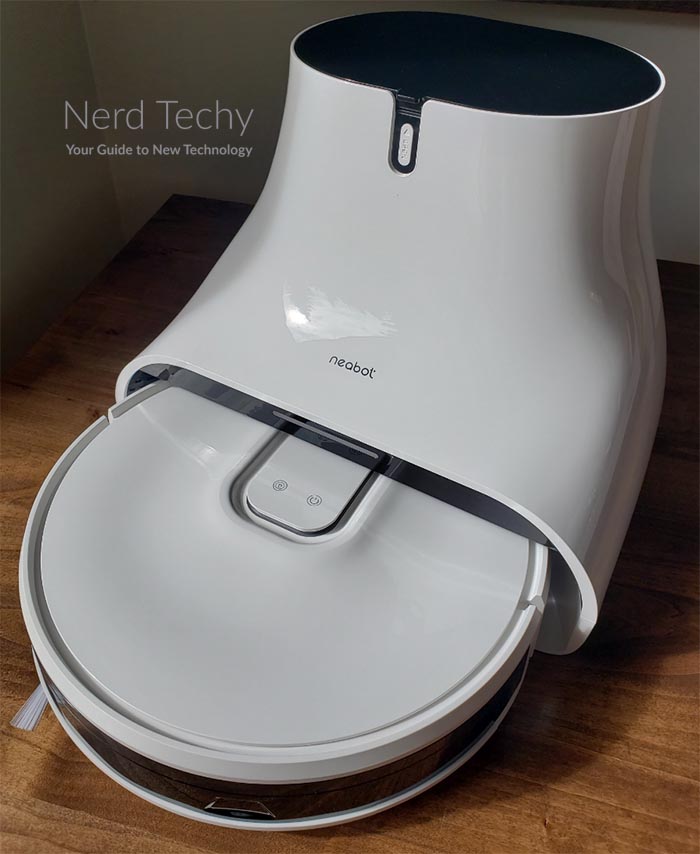 The Neabot NoMo Q11 is one of the more capable robot vacs on the market. It’s not as efficient as it could be, but other than that, it does a very good job of keeping your floor clean. The vacuum and mopping functions both work well, and you can navigate almost any home. Not only that, but the app is easy to use and set up. You can’t really go wrong with this vacuum.