Every few months, companies like Netgear release the next generation of wireless routers that promise improved bandwidth, lower latency, and less loss. Although the wireless technology we have today is significantly better than what we had last year, for some there is no replacement for wired networks. Wired networks tend to produce the best quality signal of all, even in conditions where wireless would typically fail.

The problem is that not all routers are set up for proper wired networks. At best, you’re usually looking at four to five Ethernet ports. For a large LAN party, this simply won’t do. Other routers use load balancing as a way to address network congestion. Power users are given first dibs on bandwidth, while others have to wait. But when all users on your network are power users, load balancing is more of a hindrance than an asset.

If you’re looking to take your existing router and add in additional wired networking functionality, a switch is the answer. Switches are a little pricier than hubs, but the performance gains are huge. These days, if you’re using a hub you might as well just go wireless.

Netgear’s Nighthawk S8000 Switch is the latest addition to its Nighthawk line, a number of products geared towards gamers and heavy bandwidth users who will accept nothing less than the best. We’ll be taking a look at this switch to determine how it performs, and help you decide if this is the right purchase for your home network.

Modern networking equipment is more than just the beige boxes we were sold several years ago. Today, consumers are concerned with the way their hardware looks. If this resonates with you, we suspect that you won’t have any concerns with the way the Nighthawk S8000 looks. It’s a sharp looking hexagon with each outer point raising up to meet in the center. Only the from is flat, leaving room for a high-tech looking indicator light that gives you at-a-glance networking status without having to dig around in online menus. Along the back are seven LAN ports and a single WAN ports, each of which are illuminated with an electric blue LED light.

Since this product is targeted at gamers, Netgear wanted to make something that was suitable for LAN parties. Network connectivity is a big deal at serious events. When one client lags out, who’s to say it was a fair match? For this reason, the S8000 was designed as something that you can take with you without having to worry about damaging it. It’s made from a premium Zinc-Alloy that Netgear refers to as “cool touch.” This material, like any metal, is extremely durable. Chances are, it can withstand more abuse than you’d ever subject a switch to under regular circumstances. 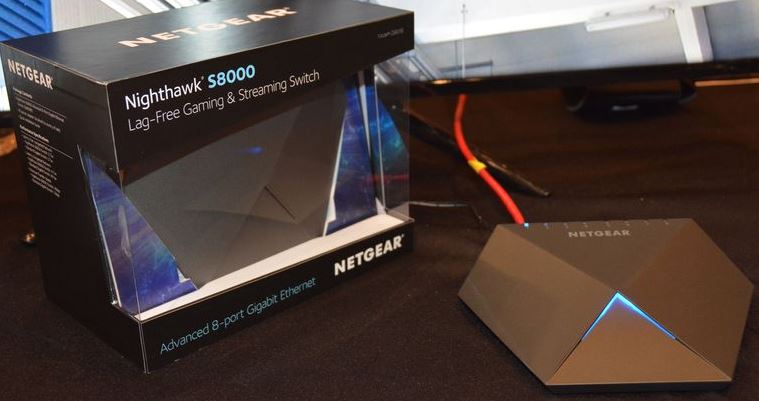 Despite being a metal, the nice thing about Zinc alloy is that it’s also very light. You get the metal look and feel, but without any of that unwanted heft.

In the unlikely event that you do run into problems, the 3-year warranty is sure to get you sorted. 3 years is uncharacteristically long in this industry, so this is a purchase we’d feel very safe making. 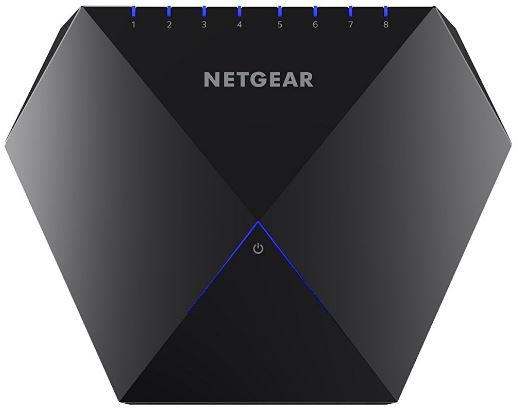 To understand how a switch can improve the performance of your network, we need to understand a little bit about how they work. There are three types of devices that can be used to connected wired networking equipment: routers, hubs, and switches. A router is always required. The router has what they call a DHCP server. This is what assigns each of your computers an IP address.

Switches and hubs are both devices that can be used in conjunction with routers. Their purpose is to take a single LAN port and split it into several. All that hubs do is take the traffic from one port and rebroadcast it to every device it’s connected to. These are cheap to make, but your computers are constantly bombarded with unnecessary traffic leading to bad ping times. This is the last thing you want for gaming.

Switches work a lot like a hub, but they send each packet to the correct destination. But their job is very simple. In this case, there is only 7 possible destinations. Switches can actually take the packet analysis duties off of your router. Any of the 7 devices connected to it will have faster ping times than if they were connected directly to the router. And the best part is that any traffic that has to go through the router has no additional ping times, since it’s a direct connection. Anytime the switch gets a packet that it doesn’t have a destination for, it’s forwarded directly to the router. This makes the pin virtually imperceptible.

In our tests, we noticed that the switch shaved a few milliseconds off the ping time for any destination it was connected to. When your already using a high end router, this is a seriously impressive improvement.

We can’t credit all of its performance to the fact that it’s just a switch. There are several other key features that all help to improve latency. You can access the QoS (quality of service) panel through the web interface. This gives you plenty of information about how your network is performing, and add some of your own tweaks to improve it further. If you’re using a Nighthawk router, some of these features expand on the capability that’s already present. 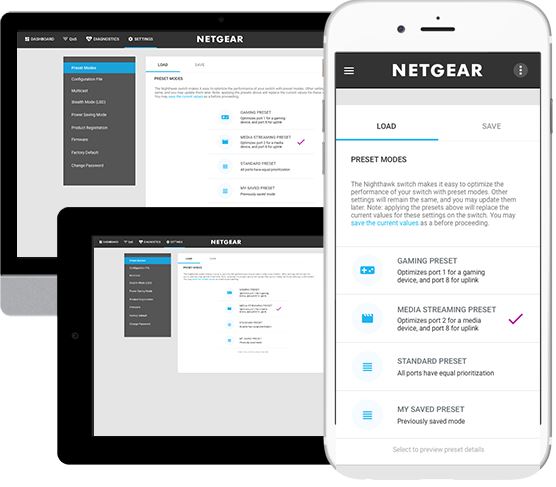 For example, you can set port configurations that assign specific ports to specific IP addresses. This is great if you’re running a server. Even if the connection has to go through the router, you’ll speed up the analysis time making the router run almost as well as the switch. This is an essential tweak to consider if you’re running a locally hosted network game, and not using online servers.

Other features include the ability to set up separate Vlans, so you can keep your gaming sessions on a network that is isolated from other networks. This stops interference from other traffic, and is ideal for use in an environment where there is lots of additional traffic that is out of your control.

This isn’t a standalone device, if you want to take advantage of everything it has to offer, you need to pair it with an equally competent router. If you’re just looking for basic connectivity, this probably isn’t your most affordable option.

If you’ve already purchased a Nighthawk X10 AD7200, this switch will drastically improve performance on hardwired networks. The router is still, to this day, one of the most powerful that we’ve used. But the one area that it’s lacking in is wired performance. The Nighthawk S8000 corrects this issue, and adds a ton of great functionality to an already impressive platform.

You’ll experience the most benefit from the S8000 if you’re doing a lot of gaming or streaming. With gaming, it’s the reduced latency that results in better performance. There is less time from the point where a piece of data is sent to the time where it’s delivered. In an age where we’re measuring our display response rate in milliseconds, it’s important to have a network that can keep up. 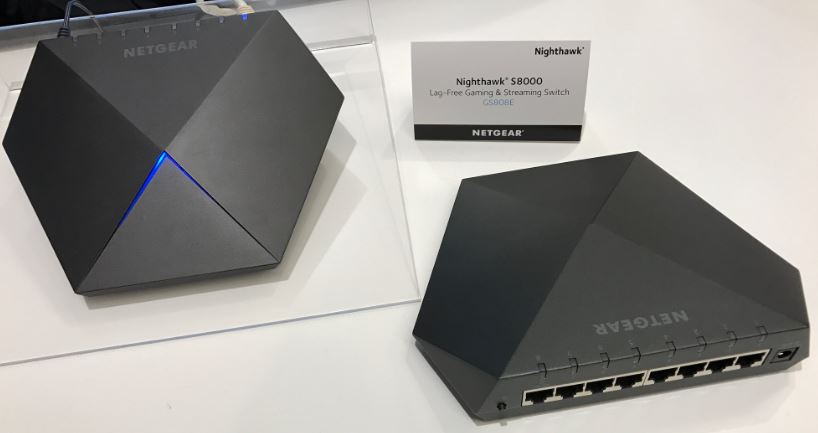 But gamers aren’t the only ones who’ll benefit from the S8000. If you’re transferring a lot of local files over the network or streaming 4K content, you’ll be putting a lot of strain on your wireless network. Moving heavy users onto a wired network connection frees up the airwaves so everyone else on your home network can get the same great performance they desire.

Who shouldn’t buy the S8000? Some users rely on existing wired Ethernet ports to get connections in an area where wireless performs poorly. In this case, you might want to consider extending your wireless network instead of looking for replacements. The Netgear Nighthawk X4 AC2200 is a high performance range extender that works wonderfully with other products in the Nighthawk system.

If you’re not a fan of digging into the nuts and bolts of your network, there are simpler options out there. The Linksys Velop is a whole home WiFi system that’s designed to be set up in as simple a manner as possible, allowing your whole household to get impressive networking performance.