TechGuru May 6, 2022 Automotive, Electronics No Comments 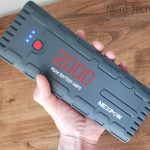 When you get in your car, you implicitly expect that it’s going to start. Unfortunately, cars can fail at the worst times. Maybe you’re on your way to an important interview, or you’re headed to meet with an important client. The last thing you want is to turn your key and for nothing to happen. When this happens, it’s all too often due to a dead battery. Suddenly you’re stuck, with no way to get on the road until you’ve gotten a charge.

People have traditionally carried jumper cables for this purpose, but jumper cables have a major drawback. You’re still relying on another driver to give you a jump. In some cases, this is a non-issue, such as if you’re broken down in a busy parking lot.

But in other cases, it’s a major obstacle. If you’re at home and none of your neighbors is around, you might be waiting a while. To be fair, there are services like AAA that will come and give you a jump, but this also takes time. Meanwhile, you’ll end up being late for your appointments, and it will throw off your whole day.

Or, you could carry your own jump starter, and take care of things on your own. Jump starters come in many shapes and sizes, with different power capacities. Some are designed for commercial use – for jumping large vehicles on a regular basis. Others are smaller, designed to be carried around in your glove box or center console. 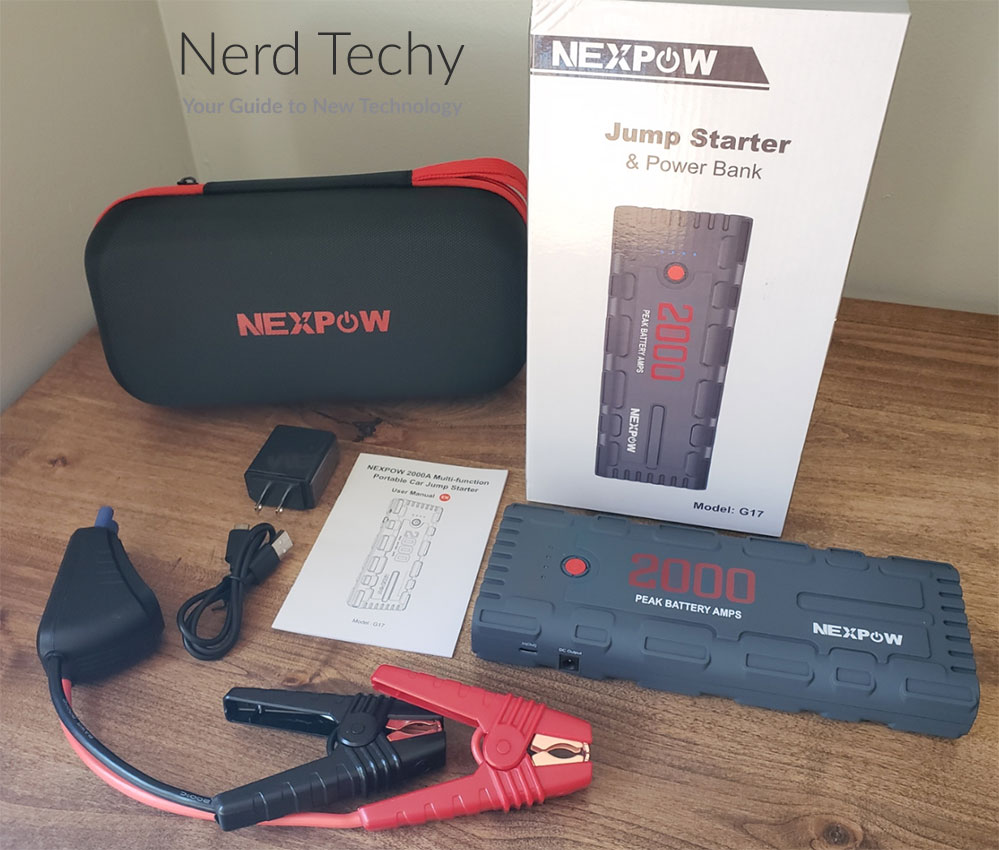 Today, we’re going to review the NEXPOW G17. This is a smaller jump starter, meant to be kept in your car in case of emergency. It also doubles as a power bank, as well as sporting a built-in flashlight.

But how well does it actually perform? To find out, we’ll need to look at all aspects of its build, starting with the physical design. We’ll talk about the jump starting performance, battery life, and charging capabilities. After we’ve gone over all of those things, we’ll have a clear picture of how it works. Let’s get started!

The NEXPOW G17 2000A Peak 18000mAh Jump Starter has a modular design. The jump starter cable and the main housing are separate, which makes them easy to store away. The main unit itself is crafted from a dark gray plastic, and weighs 2.71 pounds. It measures 9 inches long, 3.4 inches wide, and 1.2 inches thick. That’s small enough to keep in your glove box, and it feels fat and chunky in your hand. The surface has a pattern of bumps and ridges, which makes it easy to grip. 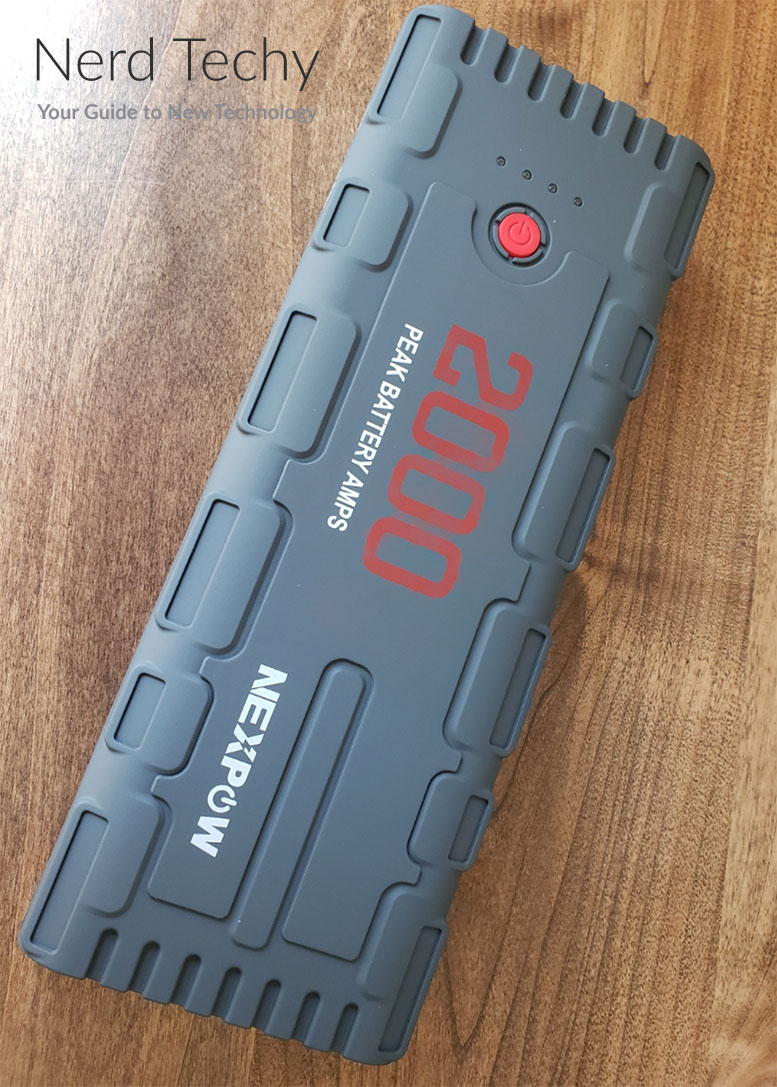 The top surface has the number 2,000 printed prominently in red, a nod to the maximum amperage. There’s also a little white “NEXPOW” imprint near the back, and a red power button towards the front. In front of the power button, there’s a horizontal row of four LED lights, which indicate the battery status. 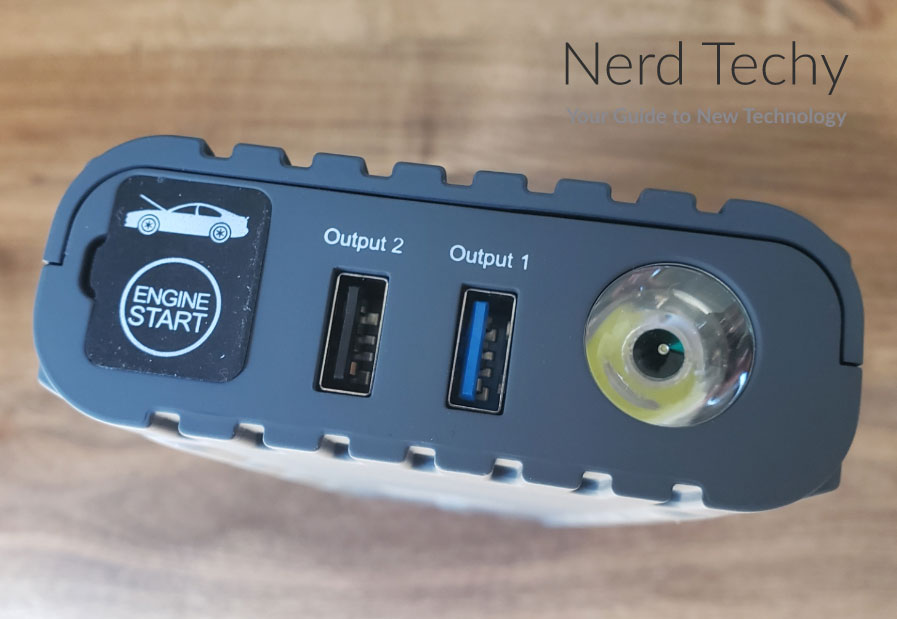 On the left side of the housing, you’ll notice a barrel-style DC power port. To the front of this, there’s a USB Type-C port. This port is two-directional, but its primary purpose is for charging the jump starter itself. To facilitate this, the kit includes a short USB Type-A to Type-C charging cable. This can be plugged into any USB power source. However, you’ll also get an AC wall adapter, so everything you need to get started is included. 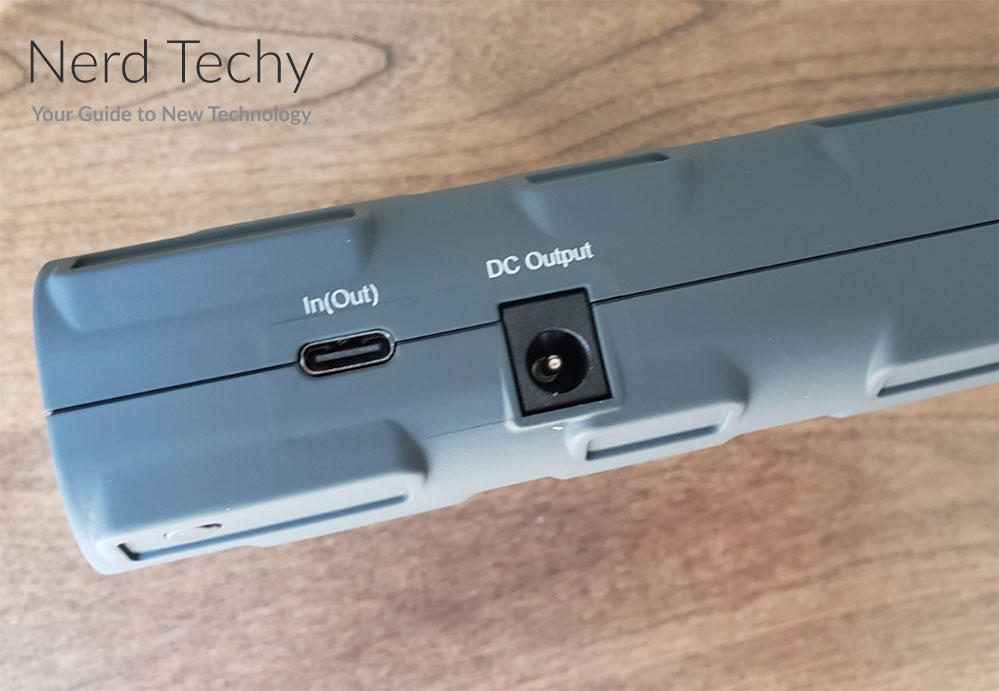 The front edge of the housing has the rest of the relevant physical features. To the left, there’s the lens for the built-in LED flashlight. In the center, there’s a pair of USB Type-A ports. One of these has a blue tab, so it’s easy to orient anything you plug in. To the right of the USB ports is the socket for the jump starter cable. This socket is proprietary, and it’s covered with a rubber plug when it’s not in use. This keeps dirt, dust, and other debris from getting into the socket and clogging it up. 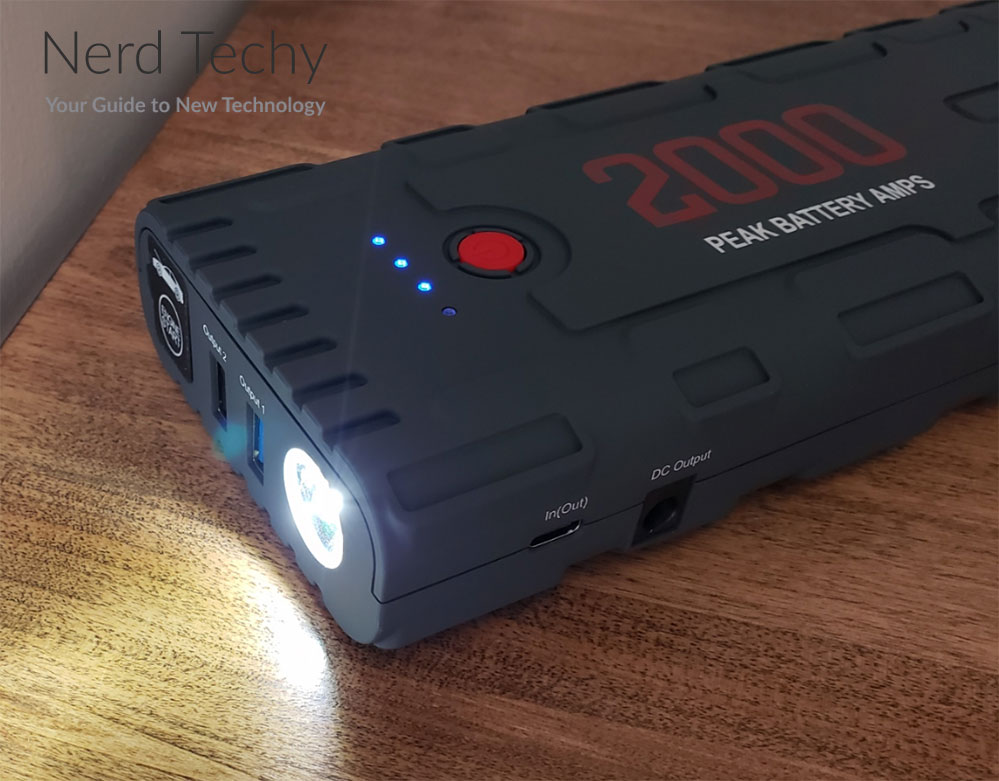 The jump starter cable itself consists of red and black cables, joined at one end in the plastic plug. Just plug it into the jack on the front of the housing, and you’re ready to jump start your car. The two cables are relatively short, but that’s not an issue.

You don’t have to reach from another vehicle, just from next to the battery. The clamps are well-engineered, both easy to grip and easy to place on your battery terminals. The plastic guards cover most of the tips, so it’s tough to touch metal by accident. This make it virtually impossible to shock yourself while attaching the jumper cables. 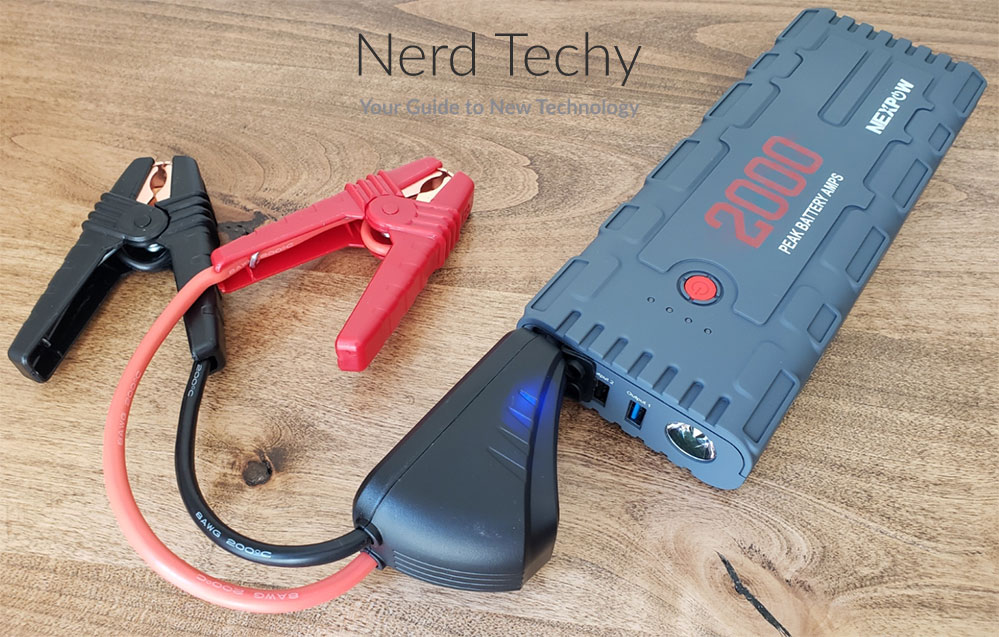 Along with the main unit and the jumper cable attachment, the kit includes a carrying case. This case is semi-rigid, with a sturdy nylon weave shell. Most of the shell is black, although the zipper itself is red. The word “NEXPOW” is printed on the top in a similar red. The case isn’t exactly bulletproof, but it’s convenient enough for storage. You’ll get far better protection from NEXPOW’s 24-month manufacturer’s warranty. This ensures that you’ll be protected if there are any failures due to a manufacturer’s defect.

Then again, maybe you’re looking for the smallest possible portable jump starter. In that case, consider the Imazing IM29. It’s exceptionally compact, as well as being more powerful. On the downside, it takes all night to get a full charge. 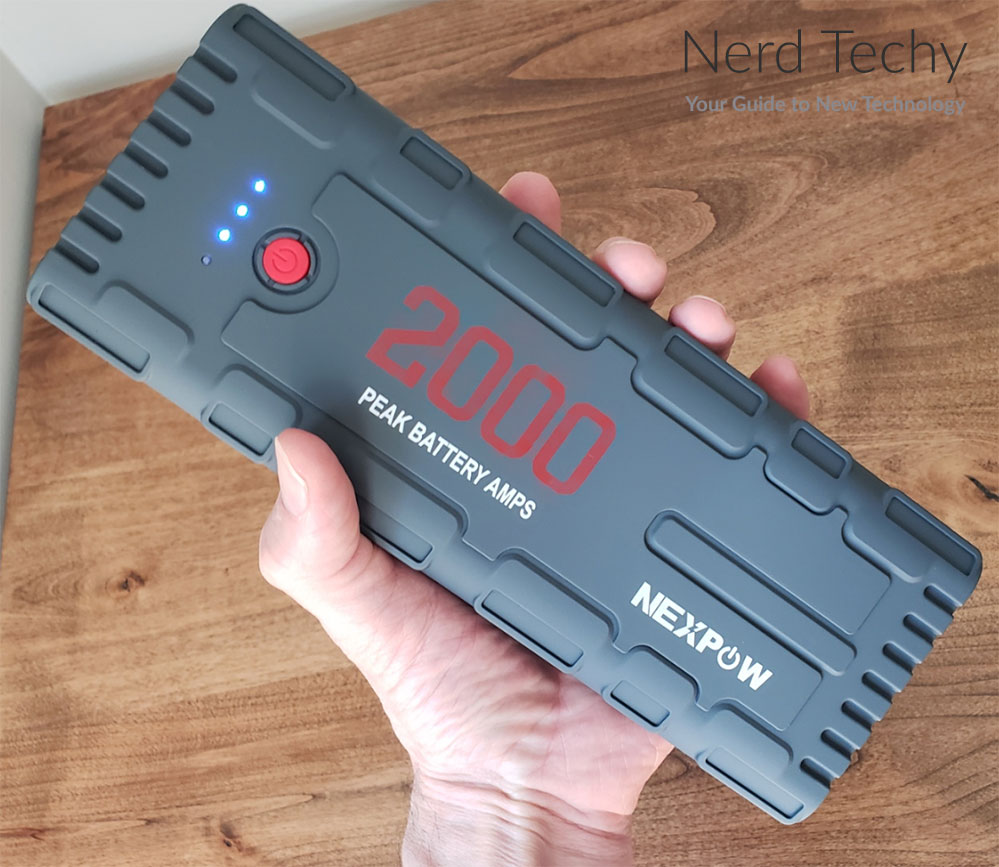 So, what vehicles can you start with the NEXPOW G17 jump starter? As you might have guessed from the name, it provides 2,000 amps of peak current. This is sufficient to start most passenger vehicle engines on today’s market. It can jump a 7.5-liter gas engine, the size of a full-sized pickup.

You’ll get similar performance for diesel engines, up to a displacement of 6.5 liters. The battery is rated to last for up to 20 jumps before losing power. In practice, though, it seems to struggle any time it’s at less than 50% capacity. This isn’t a big deal as long as you keep it fully charged. But if you’re constantly using it for other things, you might run into trouble. 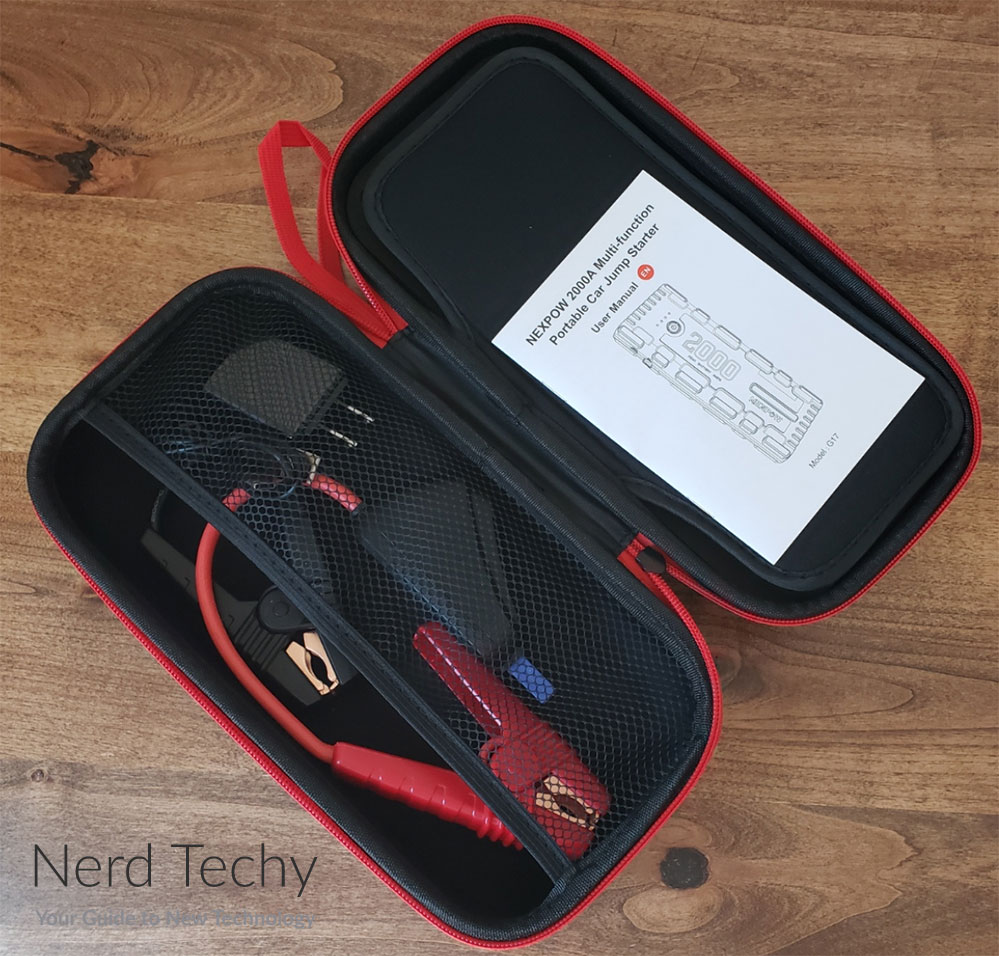 There are a number of safety features built into this jump starter’s circuitry. To begin with, you get over-current protection. This ensures that it won’t deliver excessive current, and it will shut down if a device tries to draw too much. Along the same lines, you get overload protection, which prevents it from getting damaged during charging. Meanwhile, a built-in heat sensor will shut things down if the circuitry’s temperature gets dangerously high.

Perhaps the most important safety feature is the reverse polarity protection. This will prevent the jump starter from working if the leads are connected to the wrong terminals. In that case, instead of jumping your car, the lights will flash and there will be an audible alarm. Switch the leads to the correct terminals, and you’ll be all ready to go. 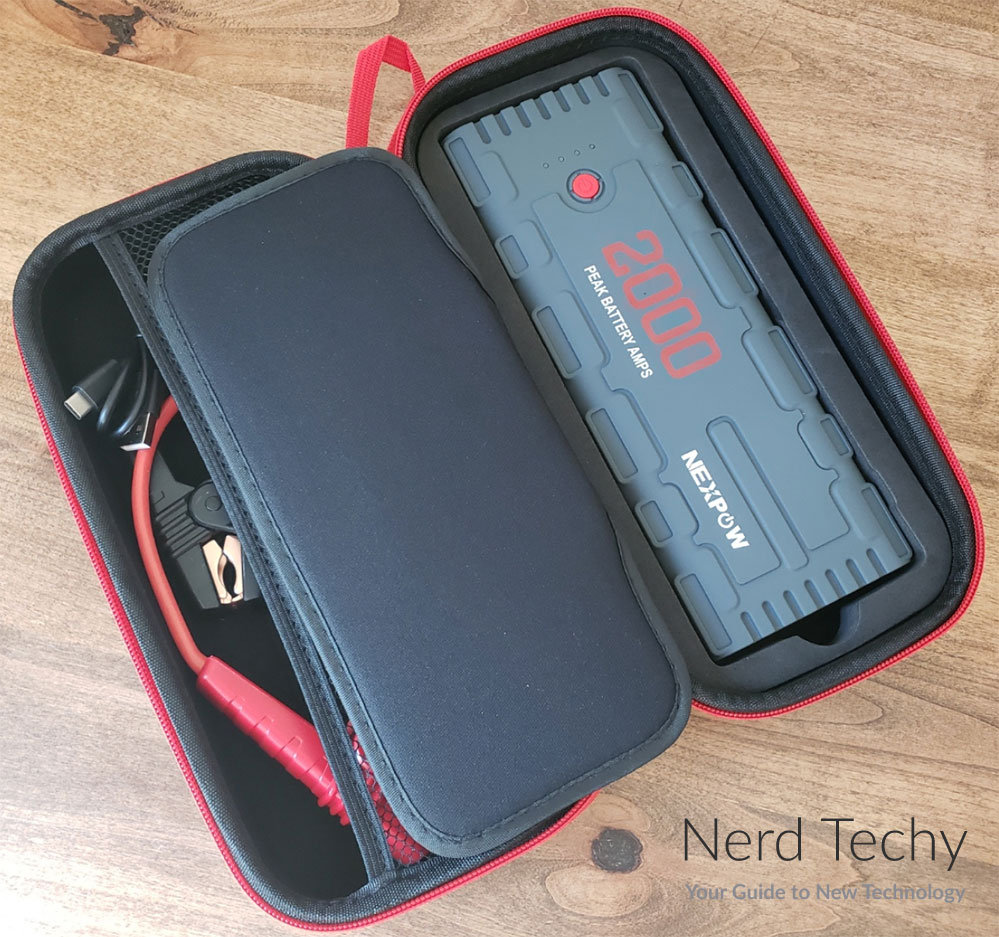 Charging the internal battery will take around 4-6 hours, depending on your charger. If you’re plugged into the included AC adapter, you’ll be getting 18 watts. This works out to a faster 4-hour charge. If you’re using a standard 12-watt USB power source, it will take 6 hours.

This jump starter can start pretty much any ordinary passenger vehicle. But what if you need one with even more power? In that case, take a look at the Imazing IM27. It can start up to a 10-liter gas engine, or up to an 8-liter diesel engine – enough for small delivery vans! It’s also very rugged, but it needs to be charged overnight. 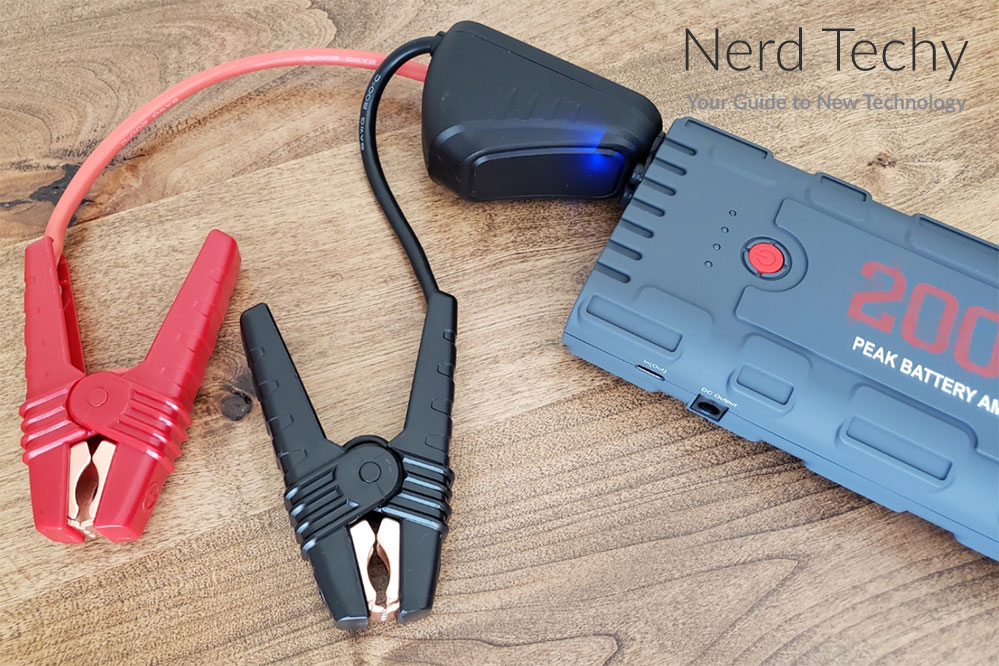 The NEXPOW G17 has a couple of tricks up its sleeve. To begin with, it doubles as a power bank, with a capacity of 18,000mAh. Depending on your smartphone, that’s enough for around 4-5 full charges. So you’re not looking at a workhorse power bank, but it’s a solid backup. You can even charge a smaller laptop, albeit not while it’s in use.

The front USB ports output different amounts of power. The black one to the right is an 11-watt port, designed for everyday uses. The blue one to the left is a 5-volt, 3-amp port (15 watts), which is better for fast-charging phones. You won’t get the full 18 watts of a true fast charger, but it’s a bit of a boost over an ordinary USB port. 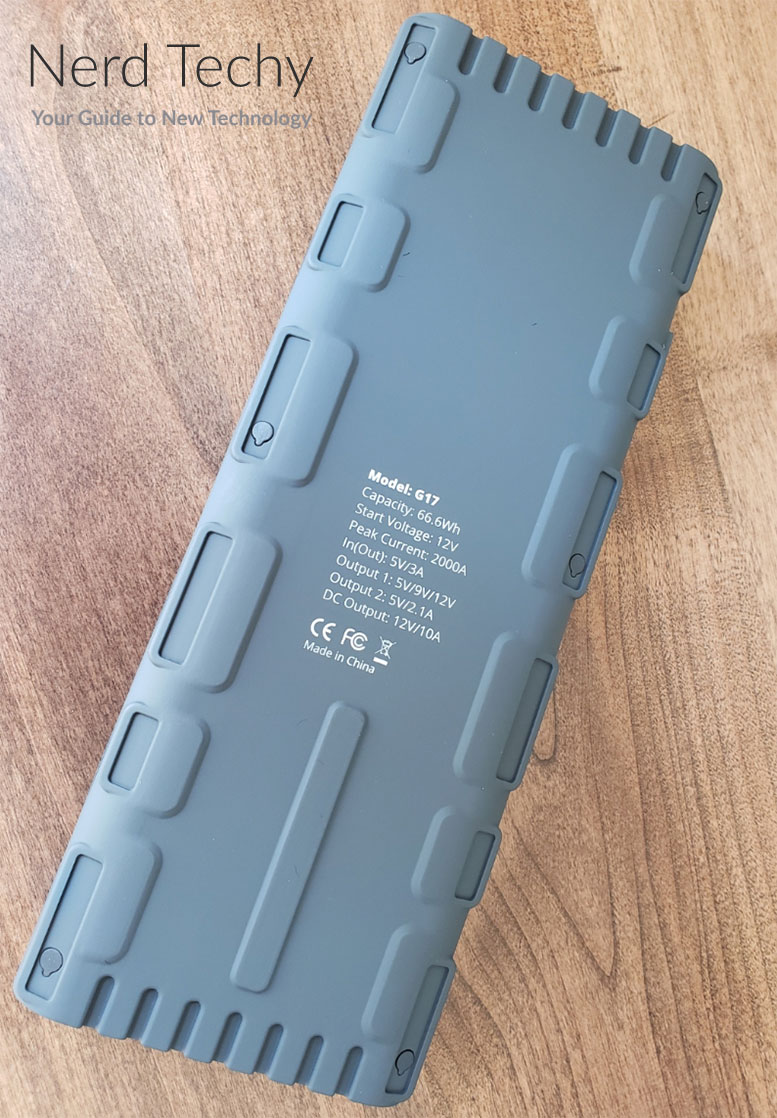 Along the same lines, the USB Type-C port on the side is a standard 12-watt port. It’s described as a quick charge port, but that refers to its use as a charging input port. The DC output on the side supplies a standards 12 volts, 10 amps. It’s ready to go with drones and similar devices, provided you have the right plug size.

The flashlight on the front works in three different modes. In addition to use as a standard light, it also boasts strobe and SOS functions. These can be used in lieu of a roadside flare, or to signal for help in an emergency. The flashlight by itself is already useful enough when you’re looking under your hood at night.

If you’re looking for an even higher-capacity jump starter, check out the Fanttik T8 Apex. It has a capacity of 20,000mAh, and it also supports true fast charging. On the downside, it can’t be used to jump lithium batteries, only older lead-acid batteries. 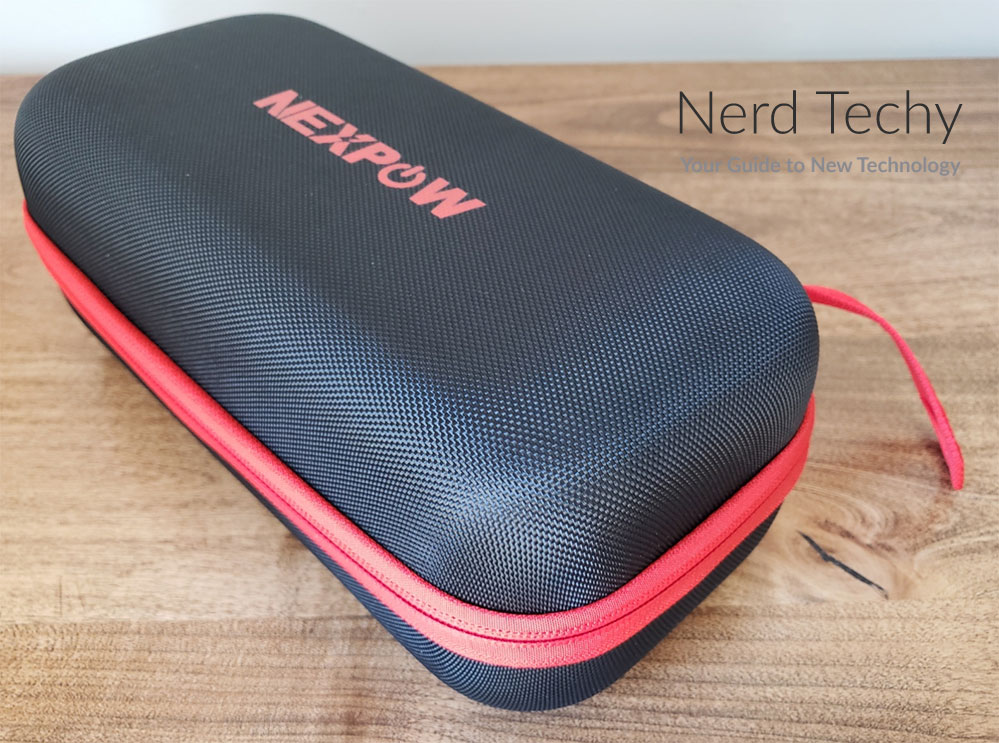 As you can see, the NEXPOW G17 2000A Peak 18000mAh Jump Starter is a real workhorse. It’s great for starting most passenger vehicles, and it also works as an emergency power bank. It’s rugged and well-engineered, and easy to hold in one hand. The clamps and leads are easy and safe to use, and even the carrying case is sturdily-designed. If you need a tough, reliable emergency starter, look no further.