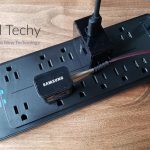 These days, we use a lot more electronic devices than we used to. Your desk could easily have a desktop tower, a monitor, an AC charger, a lamp, and an external hard drive. That’s five devices, and you haven’t even plugged in a tablet, or added a second monitor, and so on. Point being, even a relatively modest setup will require more than the two plugs in a typical duplex outlet. The same is true for your entertainment center, and even for your kitchen. If you’re running an office, you’ll run into similar issues. There might be 12 people sitting around a conference table, and all of them need to plug in their laptop.

For all of these scenarios, a power strip is going to be your best solution. You can multiply a single outlet tenfold or more, so you’ll have plenty of power for all your devices. But some power strips are better than others. For example, some may provide more or less power, or offer better safety features. One of the most important safety features to look for is a surge protector. This will keep sensitive electronics – like computers – safe from getting damaged by sudden power fluctuations. This feature is so important that you shouldn’t even consider a power strip without it.

We’re about to review the Nuetsa Surge Protector. This is a beefy, 12-outlet power strip which also provides four USB power ports. It offers over 2,700 joules of protection, enough to keep your devices safe from even the worst surges. And it comes with a robust, damage-resistant cord that can take a lot of abuse. But how much power does it supply, and how well-designed is the unit itself? To answer those questions, we’ll need to give this power strip a thorough investigation. After we’ve learned everything we can, we’ll sum it up, and provide a few closing thoughts. Let’s get started!

Why Do I Need a Surge Protector?

So, what makes a surge protector so important? Why is it the most important piece of safety equipment for most types of electronics? The answer is that over the long term, a power surge is inevitably going to happen at some point. A power surge happens whenever the electrical current exceeds a circuit’s rated voltage. When that happens, the excess power is released as heat. If there’s enough excess power, it can burn out your devices’ internal circuitry, and even start a fire. But even smaller surges can cause your devices to wear out prematurely. You won’t see the damage immediately, but your computer, phone, or tablet will degrade over time. 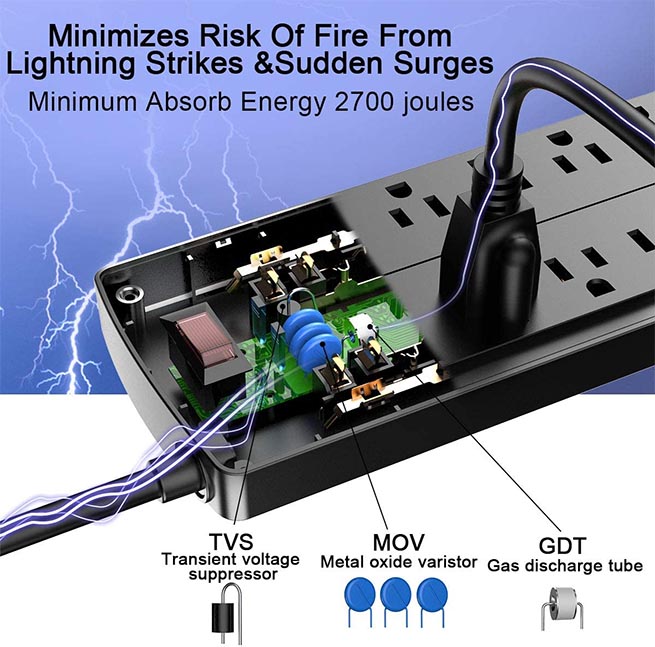 Power surges can occur due to a number of reasons, including errors by the power company. But the most common cause is lightning. When lightning strikes a power line, that energy goes right into the local grid. It can even cause a wider surge if it strikes at a local substation.
Regardless of the cause, the term “surge” is reserved for increases in power that last for more than three nanoseconds. Shorter, instantaneous power increases are called “spikes.” Most surge protectors don’t protect against spikes, since spikes don’t endanger most electronics. The power increase is so brief that nothing has a chance to overheat. That said, if you’re using a home medical device, check the specifications to make sure. Some of these devices are very sensitive, and might get damaged by a spike.

Surge protectors come in many different varieties, but they share a common basic principle. When there’s an excess current, they divert the extra voltage to the ground. Perhaps the most simple example of this is the metal oxide varistor (MOV). An MOV consists of a metal oxide rod, with a pair of semiconductors attached. These semiconductors are attached to both the power and grounding lines, but they have an unusual property. At lower (safe) voltages, they have a high resistance, so the power bypasses the MOV and goes to your device. But at higher voltages, the semiconductors lose resistance, and the excess power goes directly to the ground. That’s just one example of a surge protector in action, but the principle will be the same for any type.

Keep in mind that a surge protector only protects you from excessive power. If there’s a drop in voltage (a brownout), your devices could still be shut down. The same is true for a total loss of power. If you need your devices to receive power 24/7, connect your surge protector to an uninterruptable power supply (UPS). A UPS has a built-in battery, which will power your devices when the power goes out. 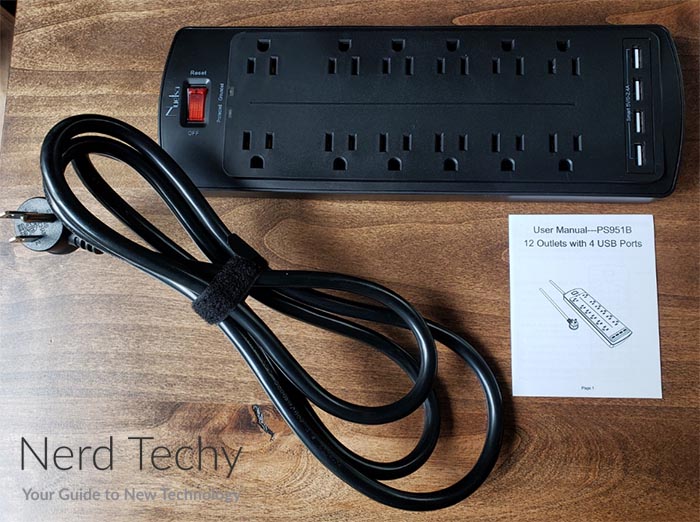 The Nuetsa Surge Protector consists mostly of a charcoal-colored polycarbonate housing. This housing is wide and flat, measuring 11 inches long, 3.9 inches wide, and 1.1 inches in height. It has a stepped design, with the outlets slightly elevated from the rest of the surface. The ends and edges are slightly curved, providing an attractive profile. On the back, you’ll find a pair of screw slots for mounting the power strip on your wall. This is a common design, and it works fine for installing the strip horizontally. However, the slots are oriented so that it’s awkward to position the device vertically. If you do, the cord will be pointing out the top, instead of the bottom. 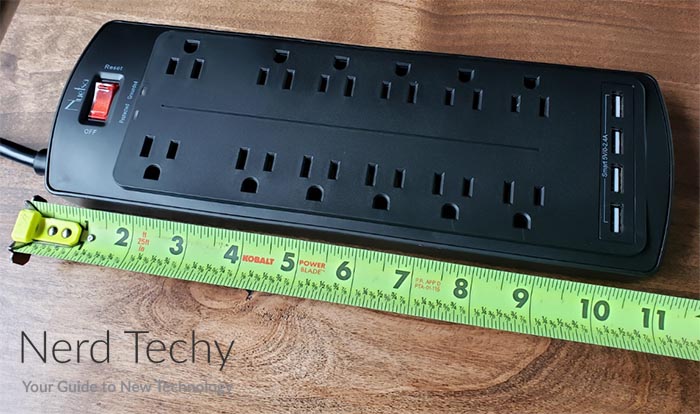 At the cord end of the Nuetsa power strip, there’s a red power switch, which can turn off the whole unit. It lights up when it’s turned on, and goes dark when the strip is powered off. Underneath, there is a pair of green LEDs. The one on the left indicates that the surge protector is working, while the right one indicates it’s properly grounded. This can alert you to any issues with your outlet, such as the ground line not being connected properly. 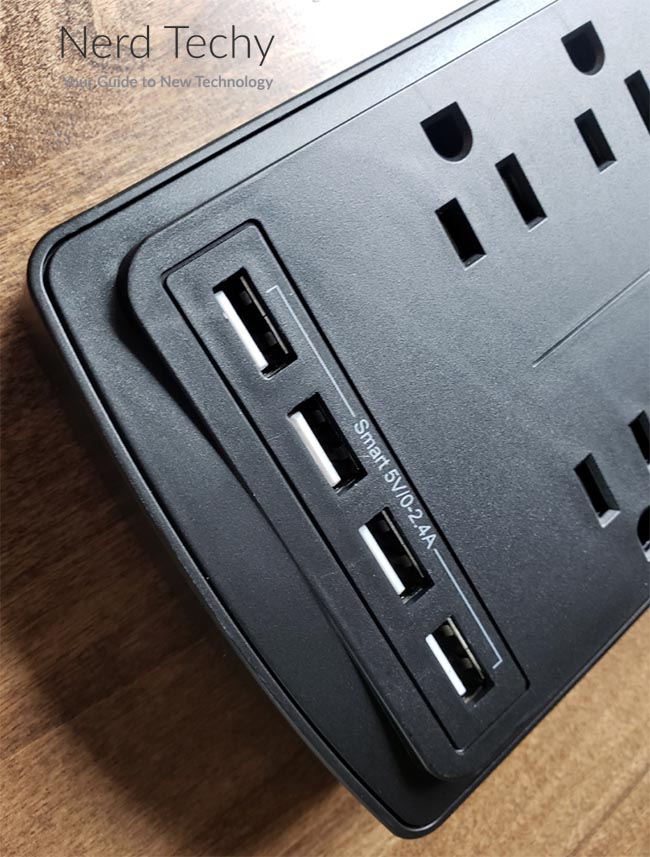 The bulk of the Nuetsa Surge Protector’s surface is occupied by 12 three-prong AC outlets. These are arranged in two long rows, with the ground holes located towards the outside. This makes it easy to orient your plugs, and to use plugs with longer heads. For plugs with large blocks at the head, there are two outlets at the end that have wider spacing. These outlets provide two inches of clearance, for even the largest AC adapters. At the far end, there are also four USB charging ports, with high-visibility white tabs inside. 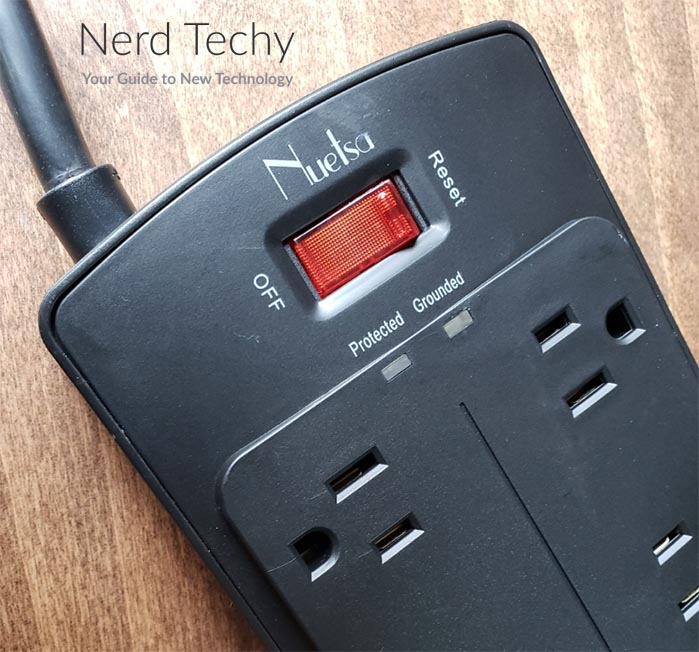 If you need to plug in even larger AC adapters, there are a few alternative options. One is the POWRUI USB Wall Charger, which boasts space for three larger plugs. That said, there are only six total outlets, and the unit covers both halves of a duplex outlet. But for a few low-wattage devices, it’s a solid choice.

The Nuetsa power strip has a six-foot cord, which is more than enough for most purposes. This cord is exceptionally heavy duty, similar in girth to a heavy-gauge exterior cable. It’s probably more than you’ll ever need for ordinary household use. Then again, if you run over it with your chair, it’s going to be just fine. Nuetsa backs this surge protector with a 24-month warranty. They also provide a 30-day, no-questions-asked return window. If that’s not enough, your connected devices are insured for up to $1 million. 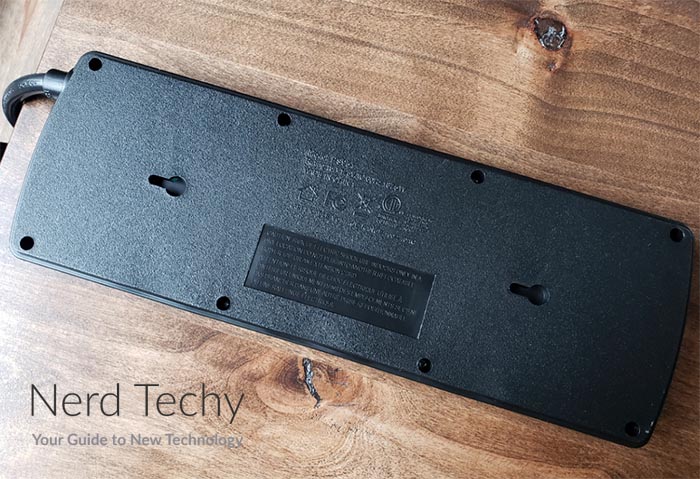 The Nuetsa Surge Protector can provide up to 15 amps of power at 120 volts. That’s the maximum power you can draw from a standard residential outlet. Since you’re relying on a single outlet for power, this only makes sense. That said, most ordinary devices don’t draw anywhere near 15 amps. If you’re just plugging in laptops and cell phones, you can use all 12 outlets without any trouble. 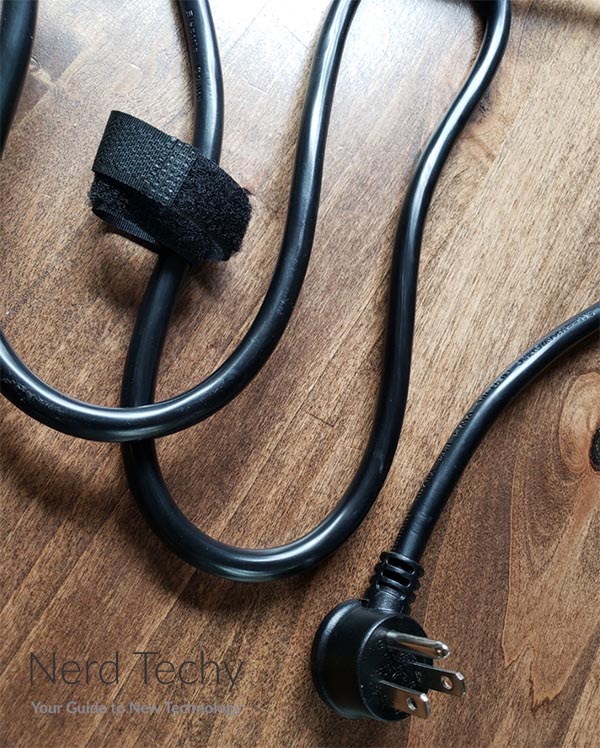 The USB ports, on the other hand, are a bit more limited. The maximum power supply is 5 volts at 3.4 amps, for a total of 17 watts. In and of itself, this isn’t bad. Even the latest iPhone will only charge at a maximum of 18 watts. That said, there are a couple of limitations. To begin with, that 17 watts needs to be shared between all four USB ports. If you’re plugging in multiple devices, your performance will drop. Not only that, but each individual port only provides a maximum of 12 watts. That’s “standard” USB power, but it’s not quite up to modern charging standards. 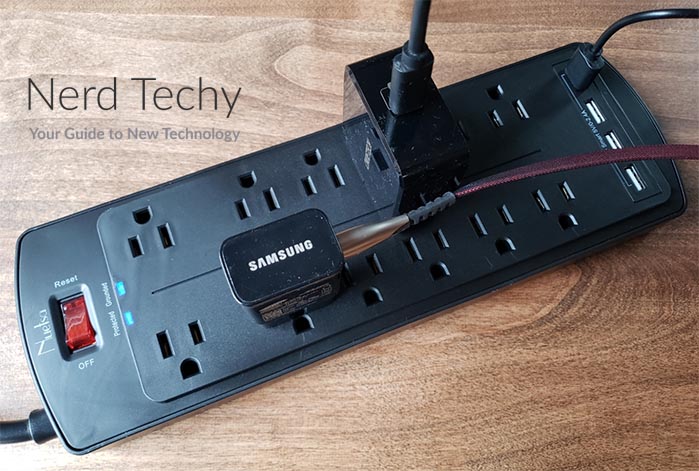 If you need even more USB power, consider the Bestek Power Strip Tower. It boasts six 2.4-amp ports, which doesn’t sound like that much of an upgrade. That said, all six ports can run at full power simultaneously. On the downside, there are only eight AC outlet, with none spaced for larger AC adapters.

The surge protection mechanism is exceptionally powerful. Instead of a single relief mechanism, there are three, so you get plenty of redundancy in the system. The first layer of protection is an MOV, which we already discussed. The others are a transient voltage suppressor (TVS), and a gas discharge tube (GDT). These technologies are a bit off the beaten path for our purposes, but they all compliment each other. In total, this system is rated to protect you from surges as high as 2,700 joules. 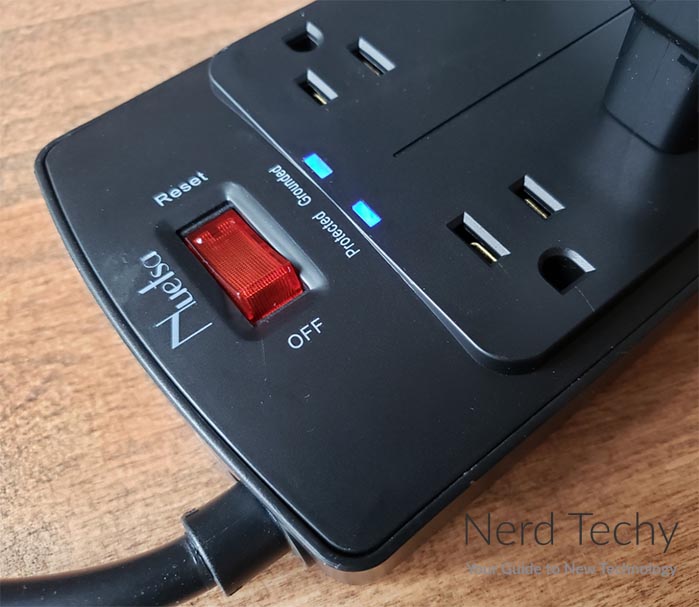 In addition, the Nuetsa comes with overload protection. If for some reason the excess power exceeds 2,700 joules, it will shut off altogether. You might suddenly lose power, but you won’t get a device-destroying surge. Finally, the polycarbonate housing itself is heat and fire-resistant. It can withstand temperatures as high as 1,382 degrees, which is more than you’ll ever need.

All in all, the Nuesta Surge Protector is one of the better surge protecting power strips on today’s market. Our only serious complaint was the orientation of the screw slots, which is fairly minor. The lower-powered USB ports were less disappointing, since that’s common on a full-size surge protector. On the upside, you get twelve three-prong outlets, with two extra-wide spaces. You also get powerful, multi-layered protection, and a reliable, two-year guarantee.