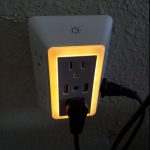 These days, our electronic devices are proliferating. Instead of a single PC, many homes are packed with tablets, laptops, and smartphones – one for each person. This has been hugely beneficial in terms of our ability to communicate and interact with the world. Your smartphone alone is a tool for banking, ordering food, and getting traffic directions. Sometimes, it’s easy to forget that you can actually use your phone to make phone calls. The same goes for laptops. We use them for work and play alike, and it’s distressing when they run out of power.

At the same time, our larger devices have been getting more efficient. TVs, for example, draw a lot less power than they used to, even as they produce crisper and brighter images. Even small appliances are taking steps to reduce their power draw. As people continue to take action against climate change, we can expect this trend to continue. The net result is that you need more power outlets than you used to, but often not as much wattage. This is particularly true in older homes, which may have only a single outlet on each wall. In this case, you have a couple of options. First, you could hire an electrician to wire more outlets, which could get expensive. Second, you could use a power strip or outlet extender, which is quick and affordable.

We’re about to review the POWRUI USB Wall Charger (6-Outlet Extender). This is a single-piece expanded housing that goes over an existing power outlet. As its name implies, it extends your outlet’s capacity from two to six. Not only that, but it sports a pair of built-in USB ports for charging phones and other small devices. But what else does it have to offer, and how well does it perform? Most importantly, is it safe for you to use? To find out, we’re going to have to look a little closer at all of its features, benefits, and drawbacks. Once we’ve given it a thorough evaluation, we’ll be better positioned to render our verdict. Let’s dig in, and see what we uncover! 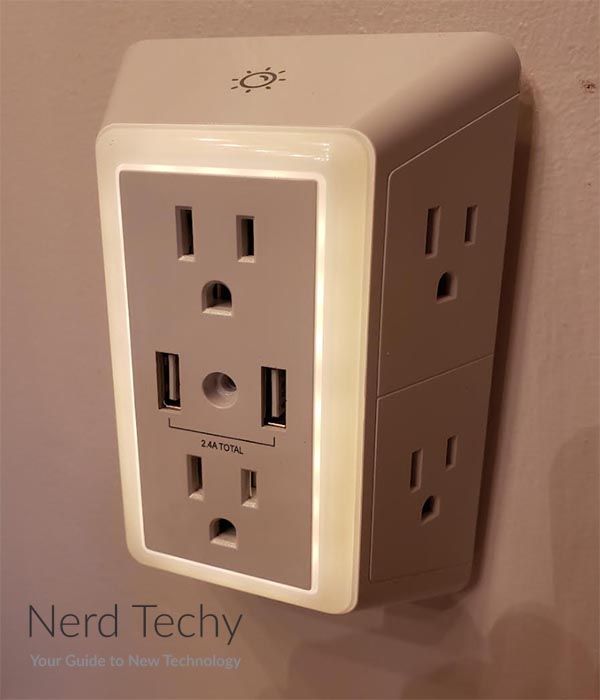 What is Surge Protection, and Why Is it Important?

Before we go any further, let’s stop for a minute and talk about surge protection. What is it, and why is it important? A power surge occurs any time the current on a circuit rises significantly higher than the rated voltage. This can cause serious damage to connected devices, since they’re designed to accept a certain current. Above that, devices will overheat, and their circuits may even burn out altogether. Power surges can have a number of causes, but in a residential context, the most common cause is lightning. Another common cause is failure at a local substation. Excess power can sometimes be sent down the wrong line, instead of to the neighborhood it’s meant for.

Keep in mind that the damage from a power surge may not always be apparent. Surges may degrade your circuitry without causing immediate failure. This will shorten the life of your computer, smartphone, or other device. We should also point out that there’s a difference between a power spike and a power surge. A power spike is very brief, and lasts for less than three nanoseconds. Unless otherwise indicated, a surge protector will only protect against longer surges, not spikes. On the other hand, spikes will only affect the most sensitive of equipment, such as some medical devices.

A surge protector keeps your devices safe by diverting excess current away from them. This can be done in a number of ways, but most home surge protectors use a metal oxide varistor (MOV). An MOV is a metal oxide rod, connected to both the power and grounding lines via a pair of semiconductors. These semiconductors have a high resistance at low voltage, and a low resistance at high voltage. At an ordinary 120 volts, no power will go through the semiconductors. Higher than that, and excess power will pass through.

The end result is essentially a bypass valve. As excess power passes through the MOV, it doesn’t go to your devices. Instead, it gets diverted to the ground. The higher the power surge, the more excess power will be delivered. On the device end, you’ll notice no difference. You’ll continue to receive a stable, reliable 120 volts of power.

Remember, a surge protector protects against excess power, not a brownout. If you lose power, or even if there’s a dip in voltage, your devices can still shut down. If you want to avoid that, you’ll need to use an uninterruptable power supply. These have built-in batteries, and deliver battery power when your primary power system fails. 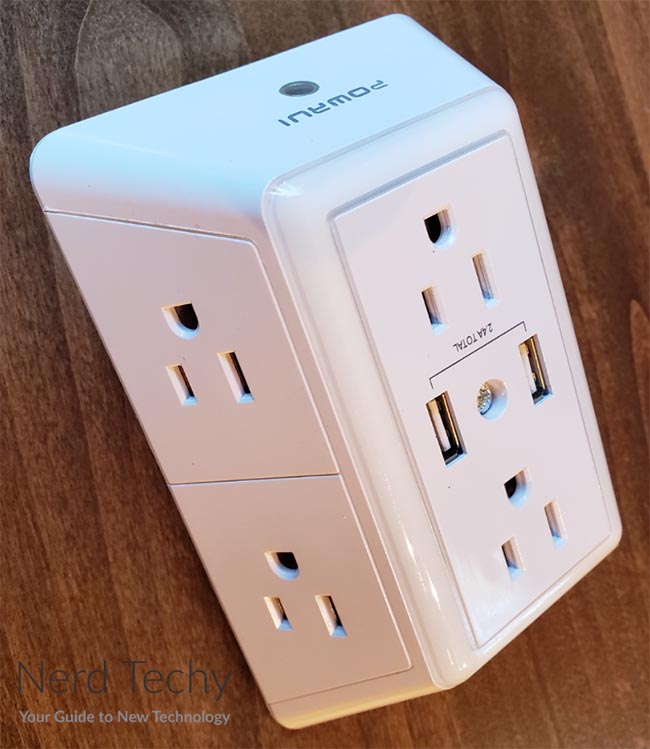 The POWRUI USB Wall Charger is a trapezoidal unit, which is wider at the wall than on the front. It sits over your power outlet, and protrudes outwards into the room. The housing measures 5.5 inches high and 3.94 inches wide where it meets the wall. It protrudes outwards by two inches, with a front plate that measures 3.9 inches high and 2.8 inches wide. It’s white in color, with a matte, fingerprint-resistant finish. Oddly, it only plugs into the bottom outlet, despite covering both halves of a duplex outlet. This makes installation a bit more simple, but it limits the total amount of power. We’ll talk about that more in a second. 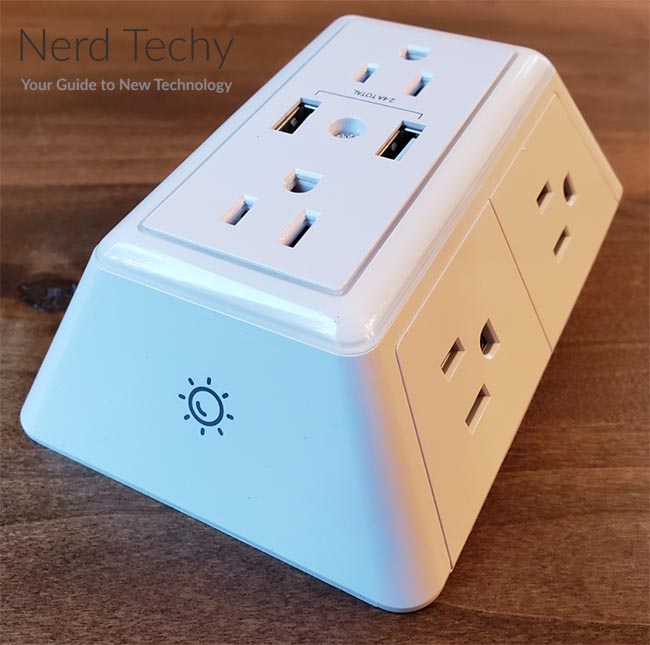 The outlets are arranged as follows. First, there are two outlets in the center panel, much like on an ordinary outlet. Next, there are two additional outlets to either side, angled at about 45 degrees. This makes it easy to plug in devices from the sides, and helps keeps cables from getting tangled. Another thing to note about the outlet layout is that they’re widely-spaced. Instead of only 1.5 inches between them, there’s a wide gap of 2.1 inches. This makes it easier to plug in devices with large plugs, without blocking some of your outlets. The two USB ports are located on the front, in between the two three-prong AC outlets. 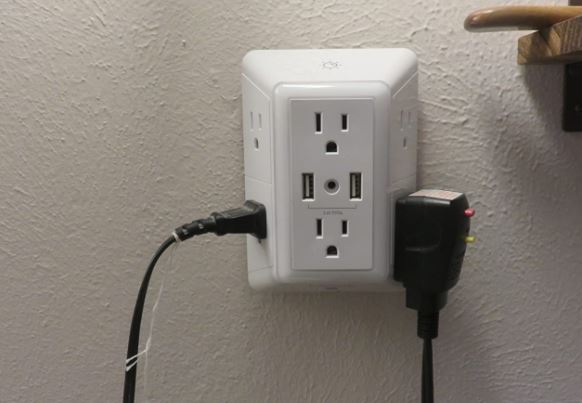 Around the front panel, you’ll notice an amber light ring. This is purely cosmetic, although it can theoretically function as a night light. But that’s rarely going to be useful. Normally, when you’re using a multi-outlet splitter, it’s behind your furniture. But it might be on a countertop, where it’s visible. In that case, you can choose between three different light levels, or turn the light off altogether. Simply tap the small button on the top portion of the outlet extender. This will easily cycle through the settings.

But what if you need more power, particularly more USB ports? In that case, the Bestek Power Strip Tower might be a better choice for you. It sports eight AC power outlets and an impressive 12 USB ports. That said, it has a fundamentally different design. Instead of fitting over your wall outlet, it sits in the middle of a table, and plugs in with a cord. 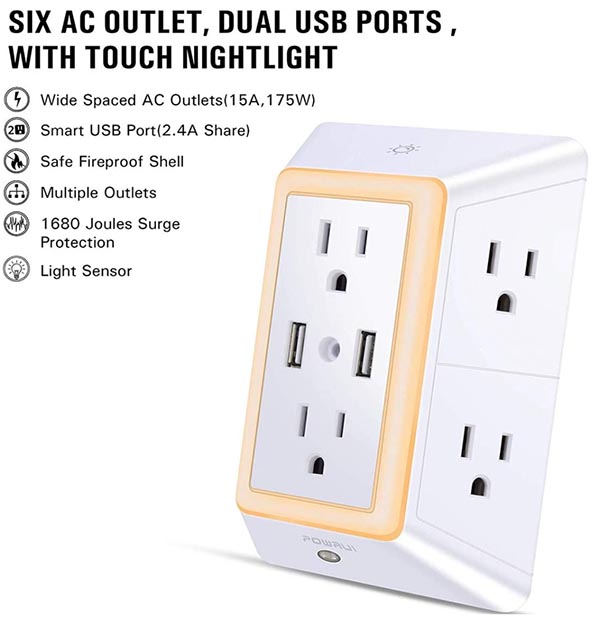 POWRUI stands behind their products. On the 6-outlet extender, they provide a 30-day no-questions-asked return window. They also offer a 12-month warranty, to protect you from defects in materials or workmanship.

So, how well does this 6-outlet extender actually perform? To begin with, let’s look at the six AC plugs. Each one can provide up to 15 amps of power, at a maximum of 175 watts. This is a bit of a mixed bag. On the one hand, a typical home circuit is 15 amps at 110 volts, or 1,650 watts. If you were to use all six AC plugs, you’d be drawing 1,050 watts. And in most homes, there will be more than one outlet on a circuit. In other words, you’ll rarely want to max out the whole circuit on a single outlet. 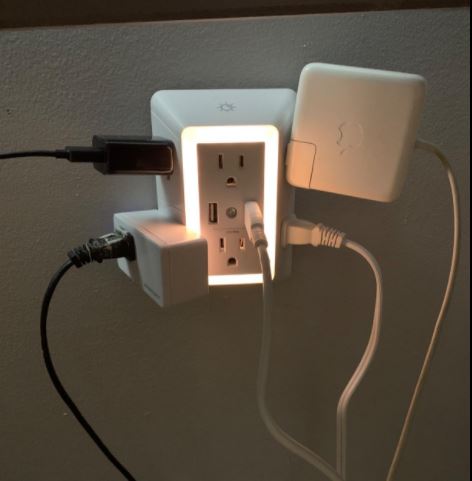 On the other hand, this limit takes away from your flexibility. A vanilla office PC can easily draw over 250 watts, and gaming PCs can draw as much as 500 watts. Sure, you won’t need more than a few watts to charge many devices. But why not make the power distribution a bit more flexible, to account for more powerful devices? This is a frustrating limitation on an otherwise well-engineered device.

The USB ports follow a similar pattern the total power is 5 volts at 2.4 amps, for a total of 12 watts. This is the ordinary standard for a single USB port. So if you plug in two USB devices, they’ll only be charging at half speed. On the other hand, if you’re only charging a single device, you won’t run into any issues. 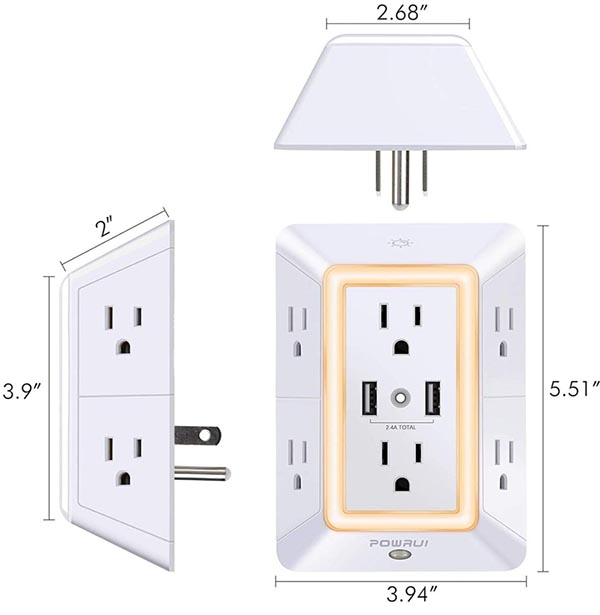 One thing this extender does offer is powerful surge protection. The built-in surge protector can withstand up to 1,680 joules of excess power. If there’s a lightning strike near your house, the extender will be fried – but your devices will be safe. POWRUI backs this up with a $1,000,000 insurance policy that covers any connected equipment. This is far more than anyone will need to cover their devices. 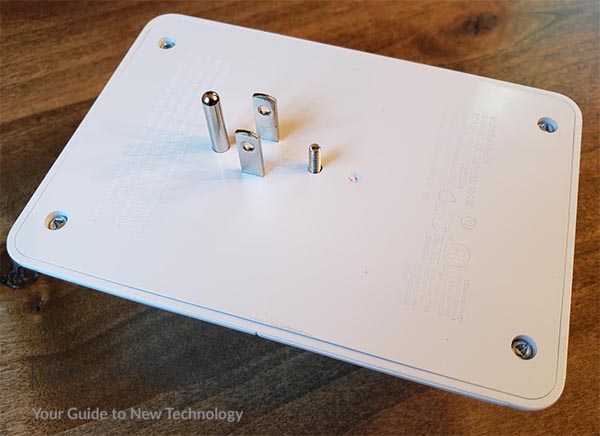 One thing the POWRUI USB Wall Charger is not is water-resistant; it’s designed for indoor use only. That said, there are plenty of other options if you need to plug in outdoor devices. Check out our review of the best outdoor power strips for a handful of good options. 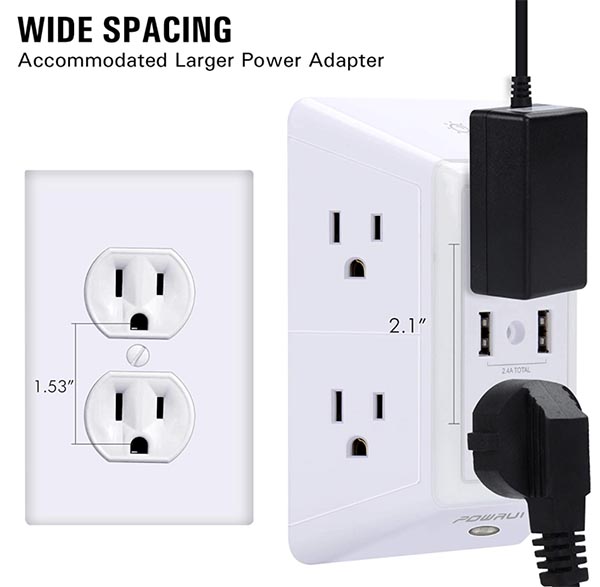 At the end of the day, the POWRUI USB Wall Charger is a powerful, if flawed, expansion system. To begin with, we were pleased with the physical design. It’s easy to install, and you can connect a number of devices. It supports both AC plugs and USB, and it even has an attractive LED light. 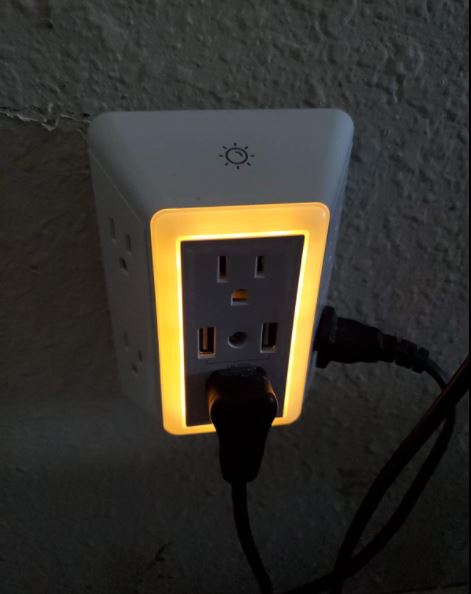 On the downside, the power delivery is a bit limited. The total wattage isn’t bad, but we would have liked to have more flexibility. As it stands, you can’t run a desktop PC from this device, because of an arbitrary 175 watt-per outlet limit. On the upside, the surge protection works very well, and is backed by a powerful guarantee. As long as you don’t need to run any powerful devices, you’ll be well-equipped.