When it comes to the safety of your home and your family, you can’t be too careful. Not long ago, “being careful” meant putting a good deadbolt on your door. But no ordinary person had the money – or the space – required for a surveillance system. If you wanted to monitor the system, you needed a dedicated CRT TV. And to record your footage, you needed bulky VCRs and VHS tapes. Not to mention, remote monitoring cost an arm and a leg. Unless you were very well-to-do, it was neither practical nor affordable.

But a lot has changed over the past several years. For one thing, better camera technology has allowed for more affordable digital cameras. But most of the advances have been on the monitoring and storage side. With modern hard drives and cloud storage, you don’t need a bunch of VHS tapes to save your recordings. And with internet-enabled smartphones, you can monitor your camera anytime, anywhere. These advances have made home security cameras an affordable option for just about anybody.

Today, we’re about to look at two powerful new home security cameras. First, we’ll be reviewing the Reolink RLC-510A. This is a high-definition camera that’s also compatible with Reolink’s home base stations. Next, we’ll look at the Reolink RLC-810A. It’s similar to the RLC-510A in most respects. However, it records in full 4K Ultra HD. This makes it suitable for seeing even the finest, most minute details.

But which one of these cameras is the best? To find out, we’ll need to take a deep dive into all the features, benefits, and drawbacks. After we’ve looked closely at both cameras, we’ll be better-equipped to make a recommendation. Let’s dig in! 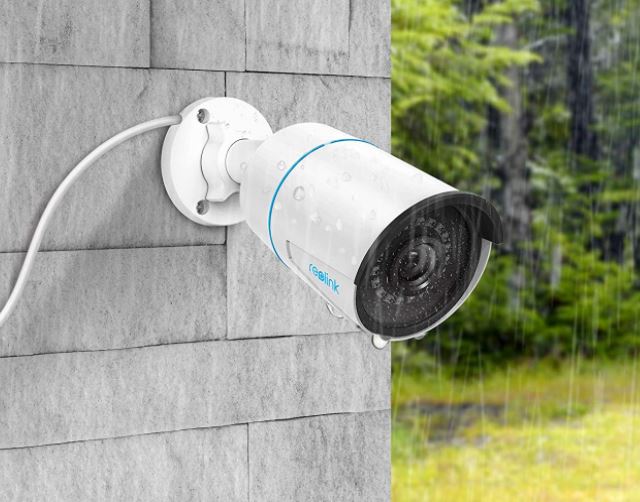 The Reolink RLC-510A is a fairly typical, cylinder-shaped home security camera. The body has a round profile, but is ever so slightly flared towards the end. The housing is constructed from white plastic, which stays clean easily. Moreover, the white body won’t attract a ton of light, improving the performance of the lens. A small shroud extends over the lens, protecting it from the elements. The housing has a standard glass cover, and you can see the lens in the center. It’s ringed by a set of 18 small LED bulbs, which assist with the night vision function. Because they’re infrared LEDs, they’re not visible at night, so your camera remains somewhat stealthy. 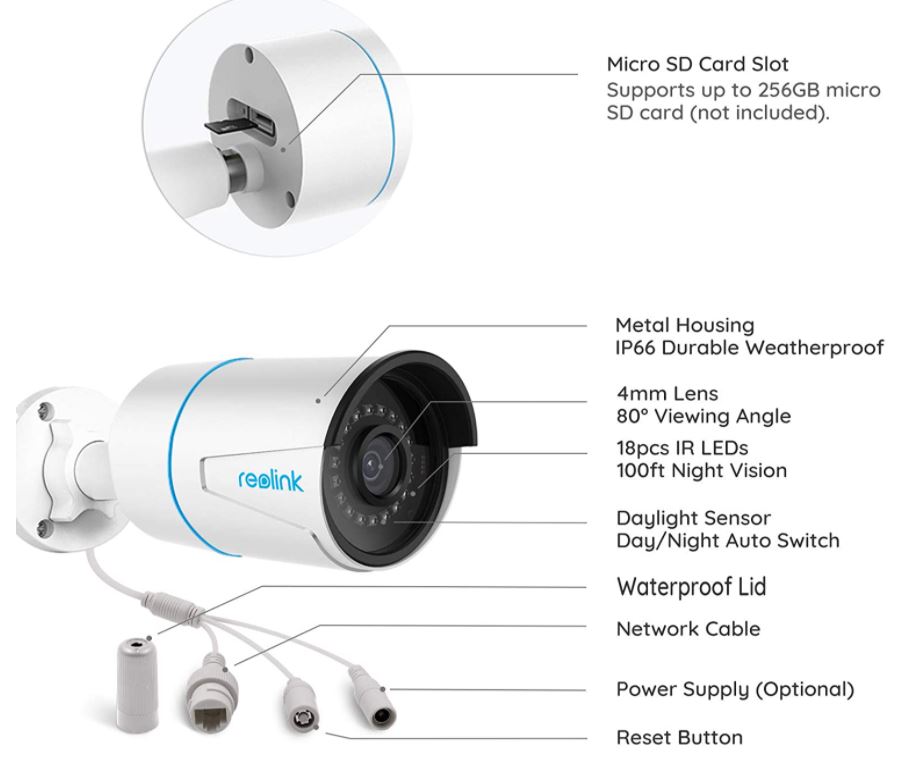 The mount for the camera is a standard three-point mount. A mounting arm extends from the camera into the mount, which in turn is screwed into your wall. The kit includes screws, but you’ll need masonry anchors for brick or stone. Installation takes just a few minutes, although you’ll still need to run a wire. We’ll talk about that more in a minute. Meanwhile, the mounting arm has a pivot so you can point the camera wherever it’s needed. This makes positioning a relatively simple matter, since you’ve got some leeway. If your camera isn’t pointing exactly where you want it, you can always adjust it later.

The RLC-510A camera is IP66-rated for water and dust resistance. This rating equates to being basically outdoor-proof. It can stand up to thunderstorms, dust storms, and other harsh weather. About the only thing it won’t handle is full immersion, which we hope isn’t a concern. Under all other circumstances, it’s a highly effective exterior security camera. 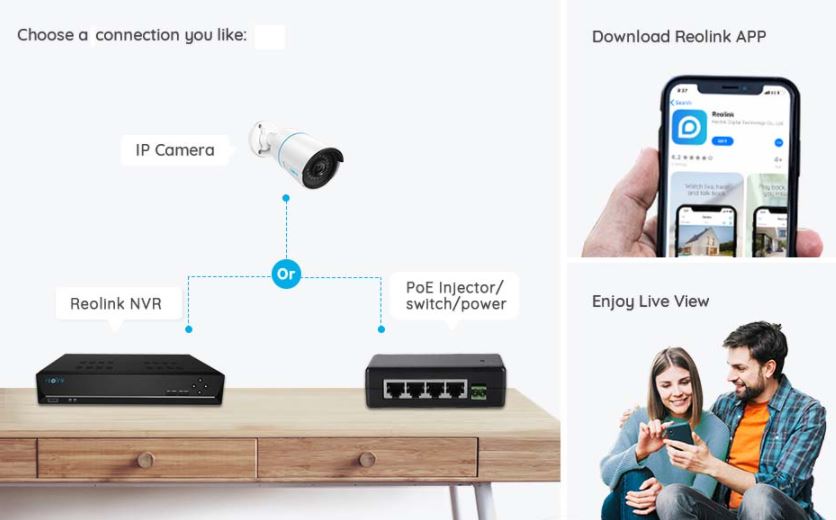 To say that the RLC-510A’s resolution is “better than 2K” might be a slight exaggeration. 2K isn’t a single, set standard, so the exact definition is a bit squishy. That said, most 2K cameras and display fall in the range of 2560 x 1440 pixels, or 1440p. The RLC-510A, on the other hand, has a resolution of 2560 x 1920 pixels. In other words, it’s significantly better than most 2K cameras by a long shot. At the same time, it could technically be considered 2K.

The camera has an 80-degree viewing angle, sufficient for monitoring many areas. We would have liked a 90-degree angle better, to cover an entire corner. However, for most purposes, 80 degrees should be good enough. More to the point, the narrow viewing angle allows for plenty of detail. The narrower the angle, the less ground those 2560 x 1440 pixels need to cover. In addition to all this, the RLC-510A camera also has a built-in microphone. It’s not a two-way mic, like many smart home security systems. Nonetheless, it’s enough to capture an audio record of any burglary or other intrusion.

The night vision function works surprisingly well. With the 18 infrared bulbs, it’s capable of recording activity even in pitch darkness. The picture is crisp and clear, and it’s in black and white, not your old-school grainy green night vision. You’ll be able to see any detail you’d be able to see in daylight, barring color. Moreover, the camera has a very long range. The LEDs illuminate out to 100 feet, so you can even see out to the street from your front porch. 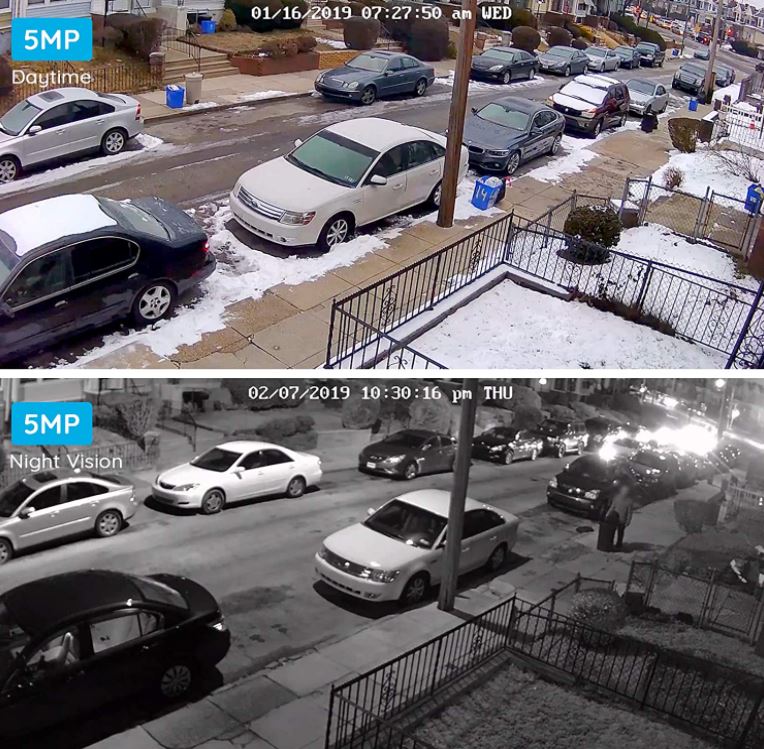 The Reolink RLC-510A camera uses a PoE cable to connect to the web. This PoE (Power Over Ethernet) cable carries both data and power. This means you only need to run a single wire to your camera. On the other hand, it also means you’ll need a PoE-compatible router and other accessories. Assuming you’ve got that all sorted out, the connection is very powerful. A single camera can be attached on up to a 330-foot run. In other words, you can put your cameras wherever you like, even on a very large property.

With all of that being said, you’re still going to need to run a wire. If you need a wireless camera, consider the Reolink Go. This camera is solar-powered, so you don’t need to plug it in. And with its own 4G connection, you don’t even need a home WiFi network. On the downside, you’ll have to pay for a monthly 4G subscription to monitor and record your video.

Speaking of monitoring, it’s easy to look in on the feed from the RLC-510A. First, you need to install the Reolink App, which is free on both Android and iOS devices. Once that’s installed, you can pair the app with your camera, and start monitoring. 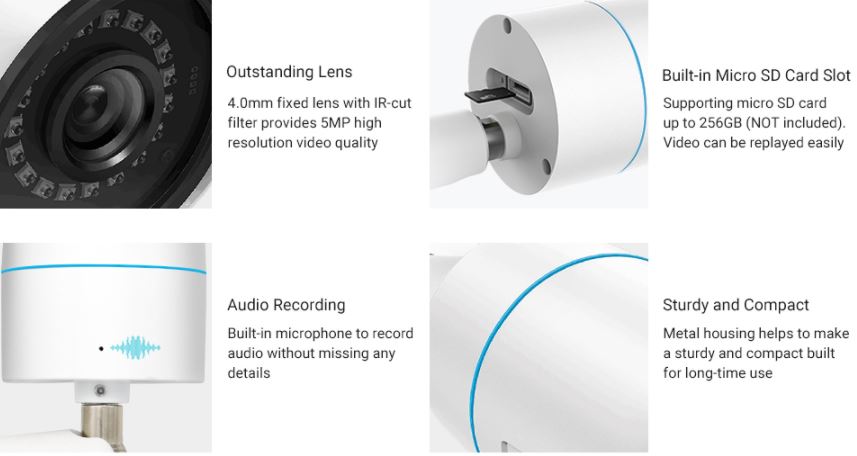 The most basic option is simply to monitor the live feed. However, this isn’t practical for most security purposes. A more effective solution is to set up real-time motion alerts. In this mode, you’ll get a push notification and/or email whenever something triggers the camera. You can even set custom motion detection zones. For example, suppose the top quarter of your screen shows a busy street. You can block that section out, so you won’t get an alert every time a car goes by.

Finally, you can choose to record during a scheduled time. This won’t send an alert to your phone, but it will store the video for later review. Regardless of whether you’re making scheduled, manual, or motion-detection recordings, you need storage. For this purpose, the RLC-510A has an SD card slot for local storage. It supports up to a 256GB micro SD card, enough for almost two weeks of footage. Alternatively, if you own a Reolink NVR base station, you can save your footage on a hard drive.

In addition to all this, the Reolink RLC-510A can be paired with Google Assistant or Alexa. If your hands are tied, you can simply tell your voice assistant to bring up your camera. You can even name individual cameras. For instance, you can label them as “front porch,” “garage,” “backyard,” and so forth. This makes them easy to call up via voice command as well as within the app.

The only downside here is that all of the RLC-510A storage options are local. That said, Reolink offers plenty of cloud storage options. For instance, the Reolink Argus Eco + comes with free cloud storage, and it’s also solar-powered. On the downside, the video is “only” 1080p resolution. 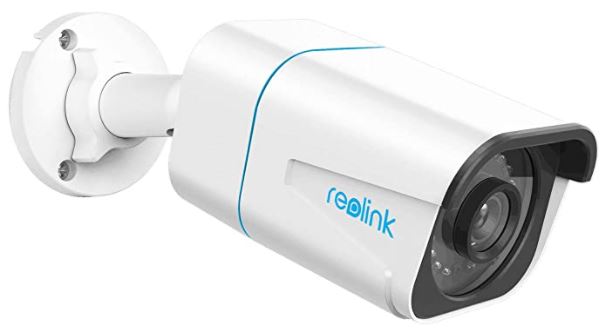 The Reolink RLC-810A is cosmetically different from the RLC-510A, but mostly the same. It has a square profile instead of round, so it “feels” more secure. That said, the design is otherwise identical. You have a white housing, with an IP66 weather-resistance rating. You have a lens cover with 18 infrared LEDs. Other than being rectangular, it’s basically identical.

Of course, if all you need is an indoor camera, you can pay considerably less. The Reolink C2 is a compact interior camera with a simple WiFi connection. While it can’t be used outdoors, you can pan and zoom it via the app. This makes it easy to monitor the inside of your home when you’re not around. 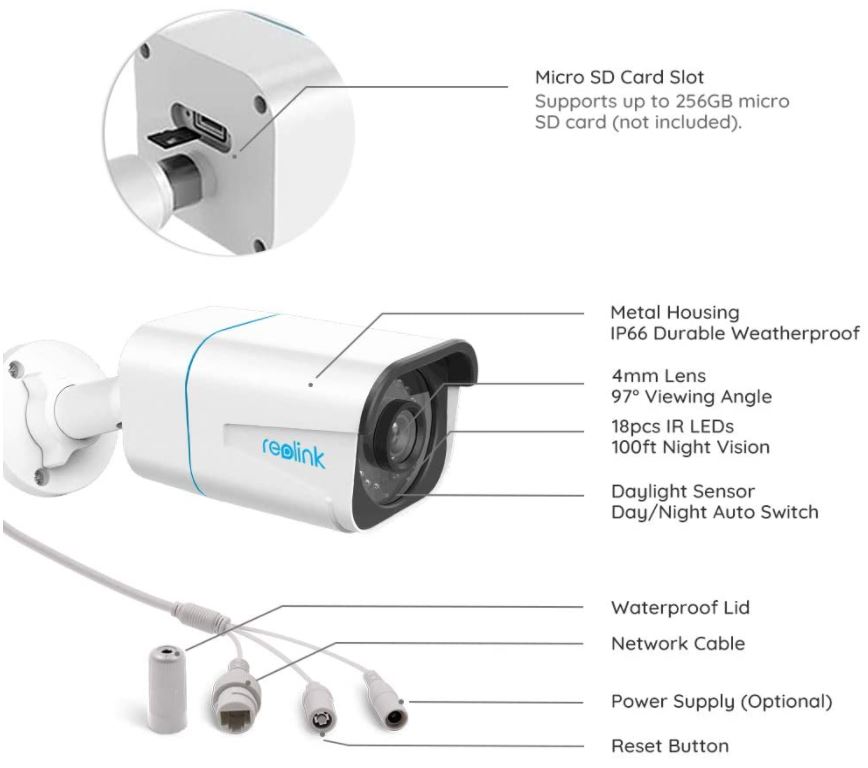 Video quality is where the Reolink RLC-810A really separates itself from its younger brother. Instead of 2K – or “better than 2K” – it records in full 3840 x 2160-pixel 4K Ultra HD. This means you can see even the finest details. It also has a slightly wider viewing angle of 97 percent, so it can monitor a full corner. The night vision performance is the same, with a crisp, black and white image and a 100-foot range. 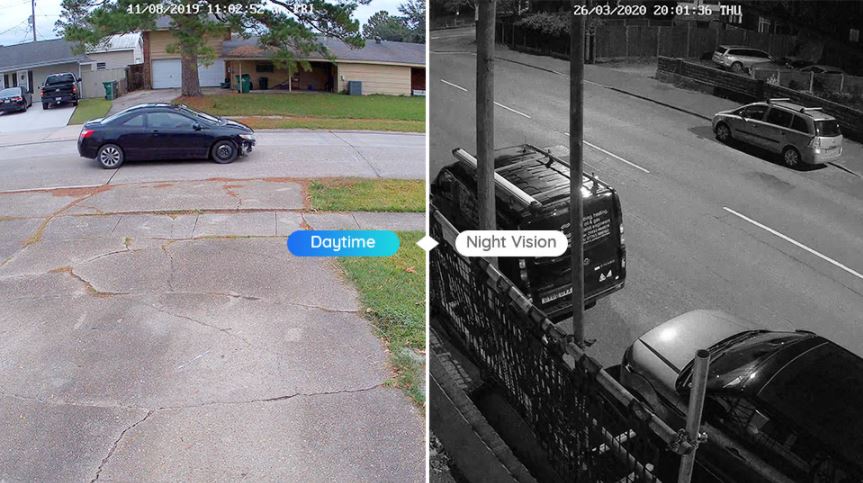 In terms of both connectivity and storage, the Reolink RLC-810A is identical to the RLC-510A. You get remote monitoring through the app, with motion alerts and scheduled recording. You get a maximum of 256GB of local storage, with the option to connect to a Reolink NVR system. You can also connect to your voice assistant. There is literally zero difference here.

As you can see, the Reolink RLC-510A and the Reolink RLC-810A are nearly identical. Apart from some cosmetic differences, they perform the same functions. They both record night vision in very high quality, with sharp images and video. They both offer real-time motion alerts, time-lapse recording, and other useful features. You even get audio recording. Not only that, but thanks to the PoE functionality, installation is relatively simple.

The only significant, non-cosmetic difference is that the RLC-810A records in full 4K Ultra HD. Even here, though, there’s not much difference. The RLC-510A already records in 2560 x 1920, which is better than 2K. In other words, the difference between the two cameras is more of a bunny hop than a quantum leap. Unless you absolutely need 4K video, save your money and order the RLC-510A. In every other respect, it’s just as good as the premium model.