With a few early exceptions, wireless internet has been around since 1997. In that 24 years, the technology has come a long way, as has the way we use it. Back in 1997, most people used WiFi for their laptop. While Ethernet was perfectly practical for a desktop, a laptop required wireless internet to reach its full potential. Moreover, people in 1997 were using their laptops for 1990s internet things. They were sending short emails, posting on message boards, or transferring simple text files. By the mid-2000s, our demand for internet had become insatiable. The development and popularity of smartphones vastly increased the amount of bandwidth needed in the average household.

Another major change also happened in 2007: that year, Netflix began offering its streaming package. This led to a deluge of streaming media services. Suddenly, people weren’t just using internet on their phones and computers. Now, you could add game consoles and smart TVs into the mix. Needless to say, all of this has put constant pressure on router manufacturers to keep up. WiFi is now in its sixth incarnation, and developments on the next version are no doubt already underway. If your WiFi isn’t working as well as you’d like, chances are good that your router is to blame. 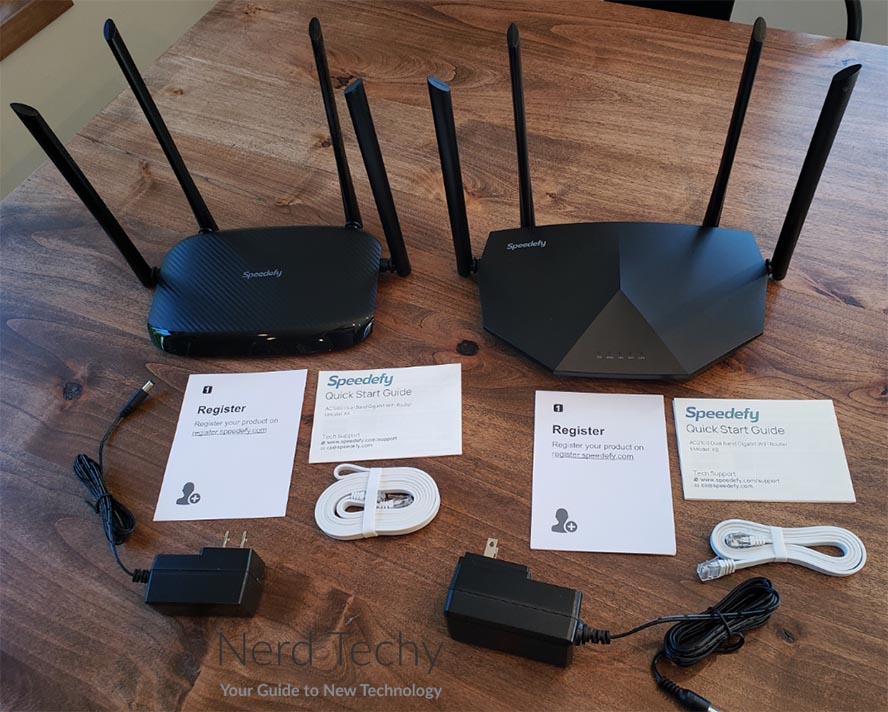 Today, we’re going to review two new Speedefy routers, the K4 and the K8. Speedefy is a newer company, but they’re one we’ve looked at before. We recently reviewed the Speedefy K7W, and we were reasonably impressed. Of the two routers we’re looking at today, the Speedefy K4 is the more affordable option. It’s designed for smaller homes, or for people with relatively low bandwidth needs. The Speedefy K8 has a wider coverage area, and is fast enough to support 4K streaming. Which one is the best? Let’s take a closer look, and see how they stack up! 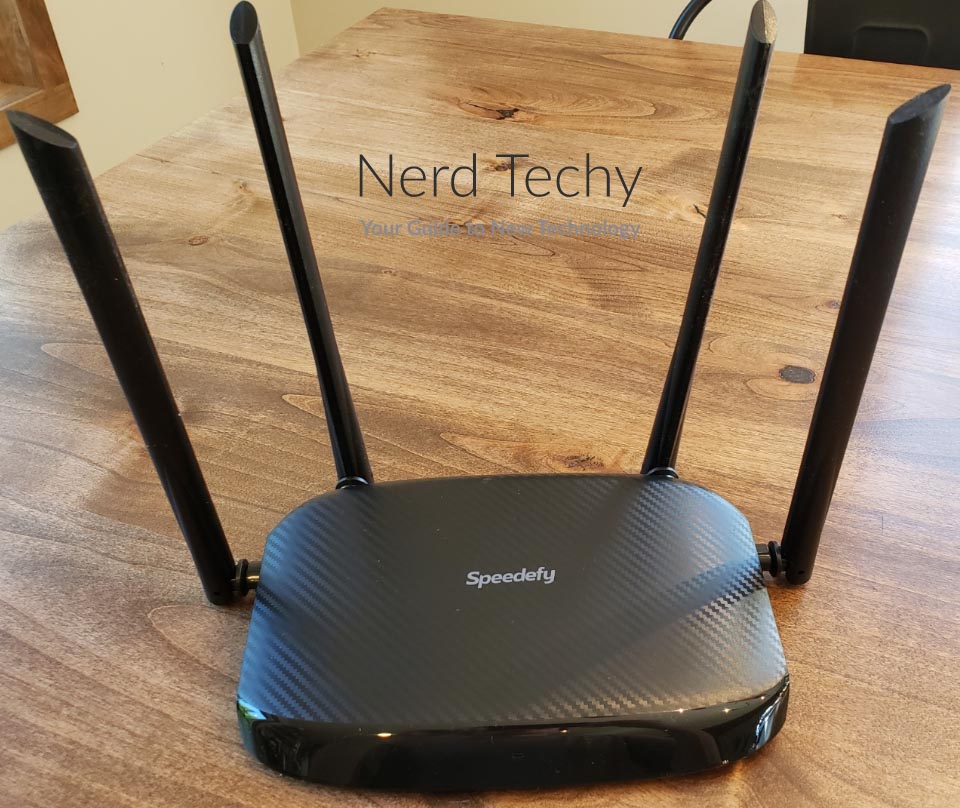 In terms of physical design, the Speedefy K4 (10% off code: MQK40612) is a mid-sized version of most WiFi routers. It’s rectangular in shape, measuring 12.1 inches wide, 11.5 inches deep, and 2.3 inches thick at its fattest point. It’s constructed from glossy black plastic, which is easy to dust off and keep clean. The top has a checkered pattern to it, along with a silver Speedefy logo. On the front, you’ll see a single LED, which lets you know the router is active. Unlike most routers, you won’t see lights for individual connections or for the uplink connection. Four antennas protrude from near the corners, and all are individually adjustable. 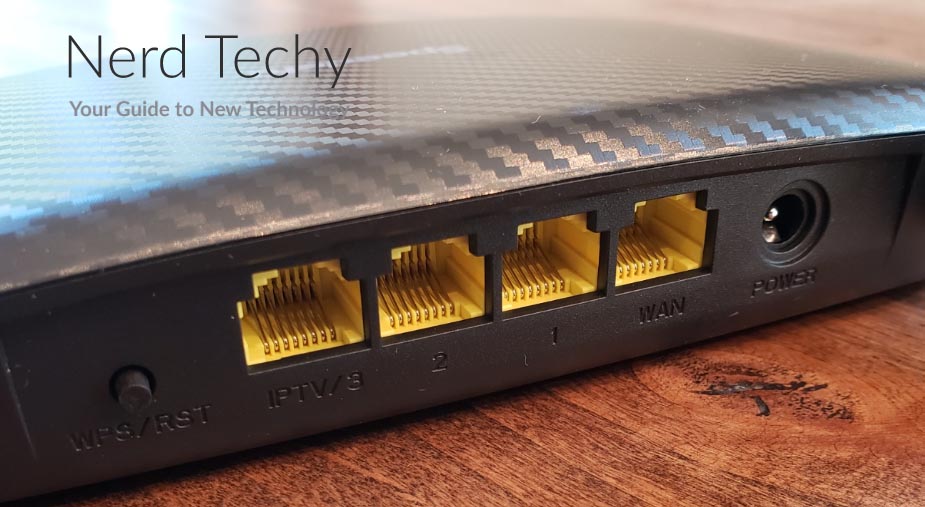 On the back of the housing, you’ll find all the ports, inputs, and controls. On the left, there’s a WPS button that also functions as a reset button. If you hate resetting your router, this will be a relief. Instead of unplugging it, you just turn it off and back on using the button. Next to that, there’s a row of four Ethernet ports. The three on the left are for connecting devices, while the first is the uplink port to your modem. To the right, you’ll see a barrel-style DC power port. A block-style AC adapter is included in the package.

The K4 has a maximum coverage area of around 1,200 square feet. Keep in mind that this is highly variable. If you’re in a ranch, for example, you’ll cover less square footage than in a two-story house. Similarly, if your home has brick or masonry interior walls, your signal will tend to drop off. On the plus side, homes and businesses with open floor plans will get comparably better coverage. 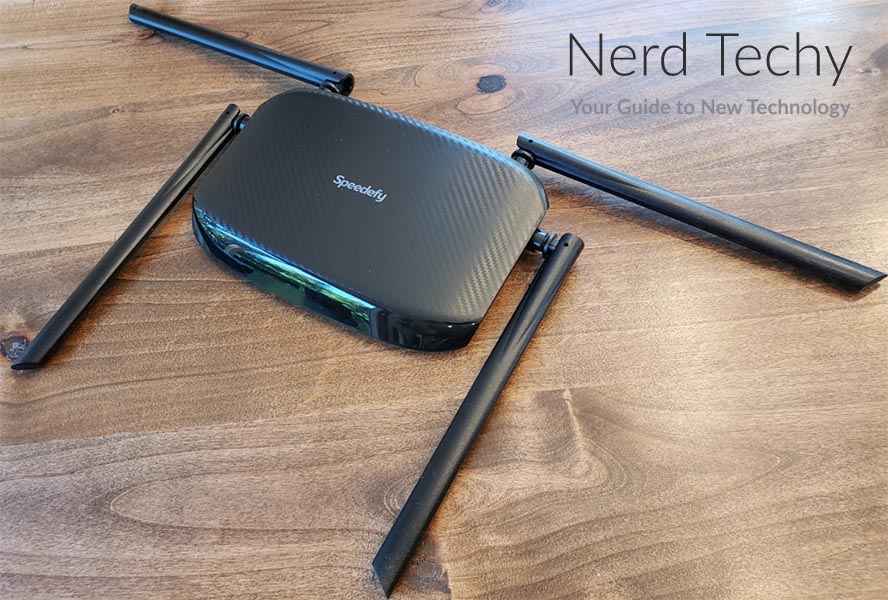 The WiFi signal uses a dual band, which is standard on modern routers. The 2.4GHz band has the longest range and best penetration. However, it has a smaller bandwidth, at only 300Mbps. Conversely, the 5GHz band has a shorter range, but 867Mbps of bandwidth. If you’re connected to both, your bandwidth will be almost 1,200Mbps. That’s theoretically better than Ethernet, although in practice it’s still slower and more prone to latency. Even so, for an affordable router, it’s not bad. And as you might expect, the Ethernet ports offer standard Gigabit speeds.

If you have a small home but want faster internet, consider the Rock Space AC2100. It also covers 1,200 square feet, but it provides a much higher bandwidth of 2,100Mbps. That said, it costs a bit more than the K4.

The K4 is reasonably good at handling multiple devices, with nominal support for up to 20. Using MU-MIMO beamforming, it works well in all directions. For a small home network, it’s got more capacity than you’re typically going to need. 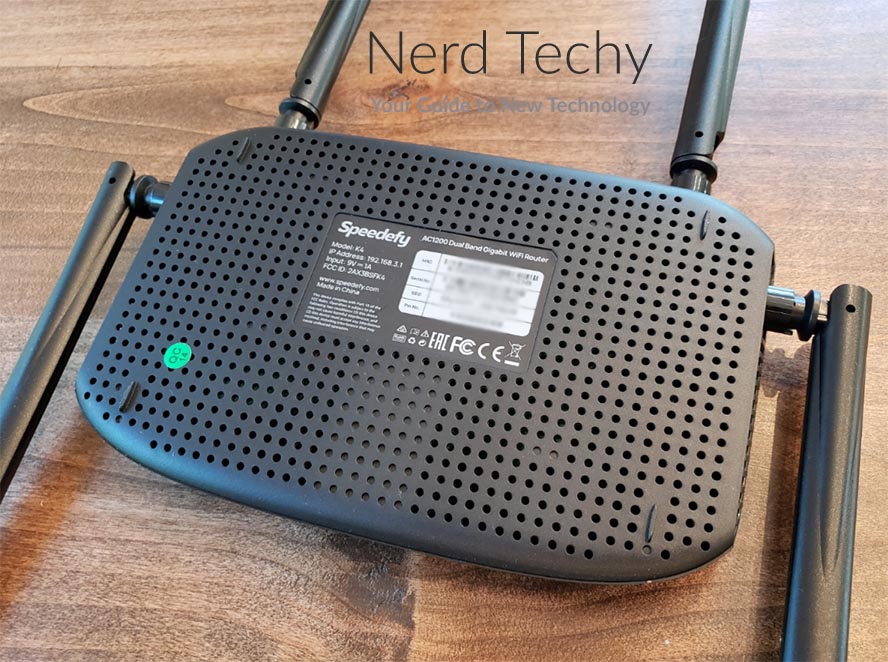 Like many modern routers, the K4 is controlled by a smartphone app. This is more convenient than old-school browser-based controls, particularly if you don’t own a PC. To begin using the router, you’ll have to download the Speedy WiFi App. From there, you’ll be able to set up your network and configure your basic settings. Once that’s done, you’ll be able to connect with any device by entering your network name and password. If that’s all you need to do, you can put the app down and forget it ever existed.

That said, there are some extra functions you might want to use that are only accessible from the app. The first is your parental control panel. There, you can create specific rules for specific devices. You can keep your kids from visiting shady websites, and limit their internet access to daytime hours. 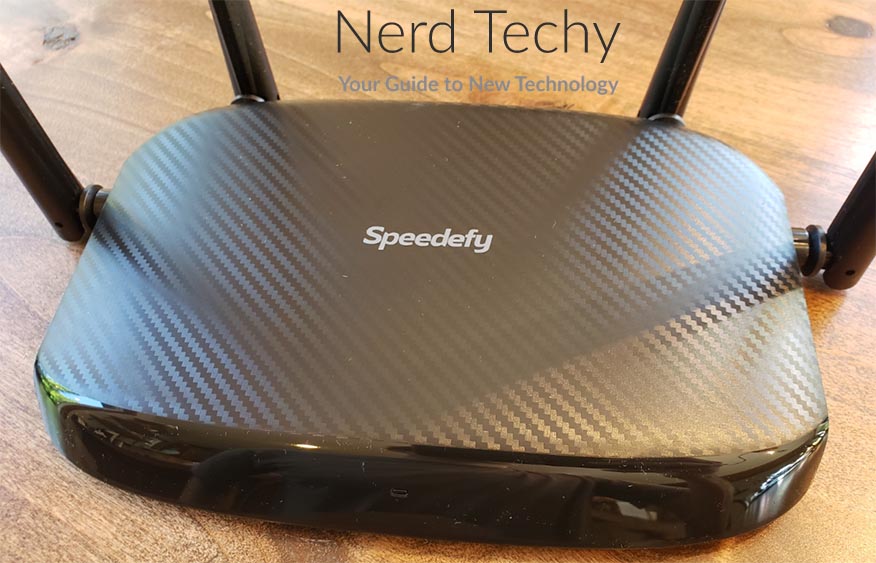 You can also create a guest network. This is a parallel network that resides in the same space as your main network. It uses a different password, and you don’t connect your personal devices to it. Instead, it’s for other people to connect to when they’re visiting. This is particularly useful for small businesses who want to offer free WiFi. You can let customers access the guest network without exposing your business network to hackers.

Finally, you can use the app to put the K4 into access point (AP) mode. In AP mode, the K4 acts as an extension of an existing network. If you already have a router installed, the K4 will connect to the internet via that router. Then, you can put it on the other side of your house as an access point. This is an easy, affordable way to reach parts of your house that are out of range of your current network. 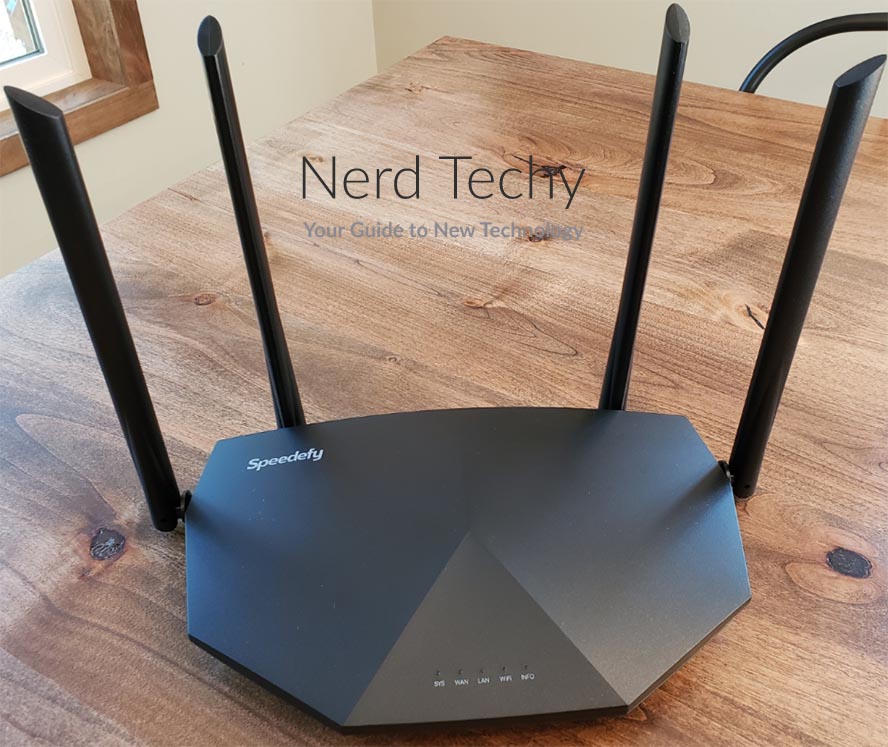 The Speedefy K8 (10% off code: MQS8RKMX) has a more modern-looking design than the K4. Rather than a rectangular shape, it has a sloped top that’s reminiscent of a stealth fighter. The satin black finish is also a nice touch. But the most prominent feature, in functional terms, is the full set of indicator lights. 364 days a year, you won’t care about these. But when it’s time for troubleshooting, they can be a big help. The overall dimensions are 12.83 inches in width, 11.42 inches deep, and 2.48 inches thick. As with the K4, you’ll also find a set of four antennas around the back corners. 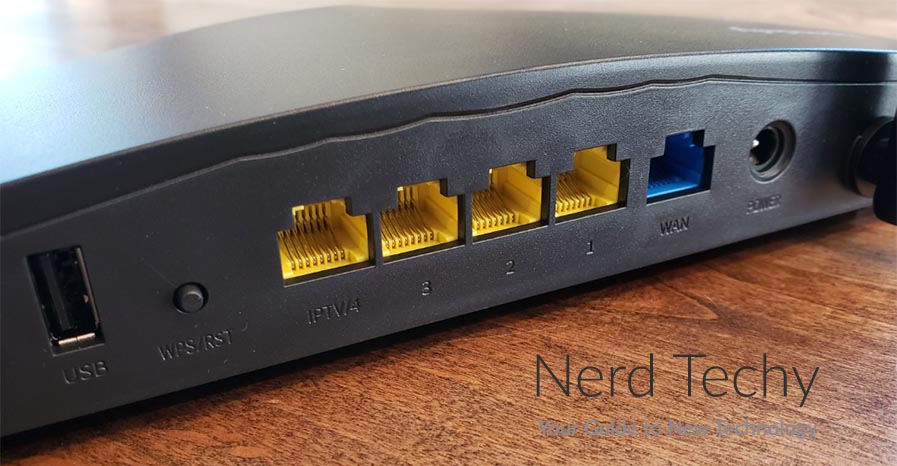 The back is nearly identical to the back of the K4, with a couple of important additions. To begin with, there are four Ethernet connections instead of three. If you have several wired devices, you’ll be pleased. There’s also a USB port for connecting a network drive or printer. 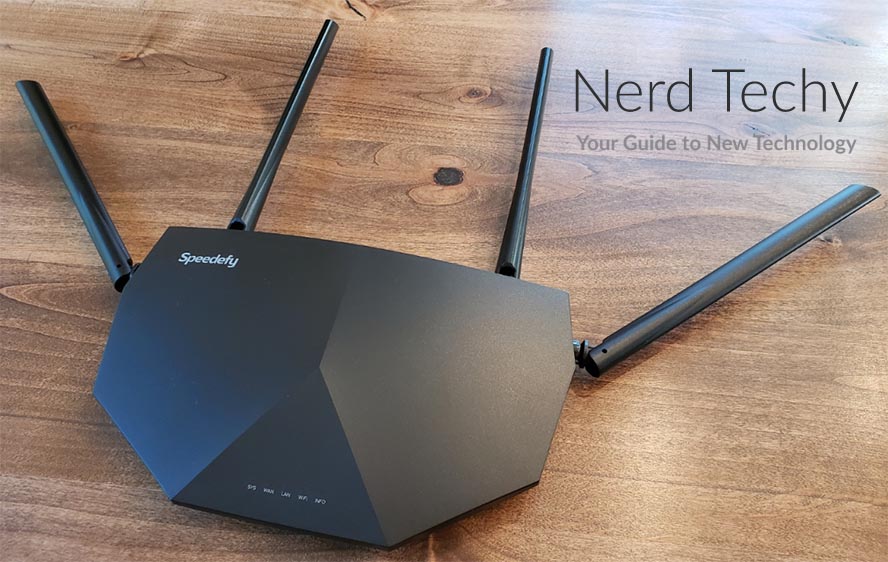 Like the Speedefy K4, the K8 utilizes a dual-band signal to provide a balance between range and speed. However, its range has been upgraded, with enough power to reach approximately 2,000 square feet. Along the same lines, the speed has also been boosted. The 2.4GHz band still provides only 300Mbps of bandwidth, which is a bit disappointing. That said, the 5GHz channel provides speeds of 1,733Mbps, for a total of 2,033Mbps. That’s more than half again as fast as the K4, and it makes the K8 far more versatile. The major difference is that you’ll be capable of 4K streaming, at least in theory. In practice, you’ll need the right internet plan, and most streaming services still don’t support 4K. Still, it’s on the horizon, and you’ll have a 4K-capable router when it’s available for you. 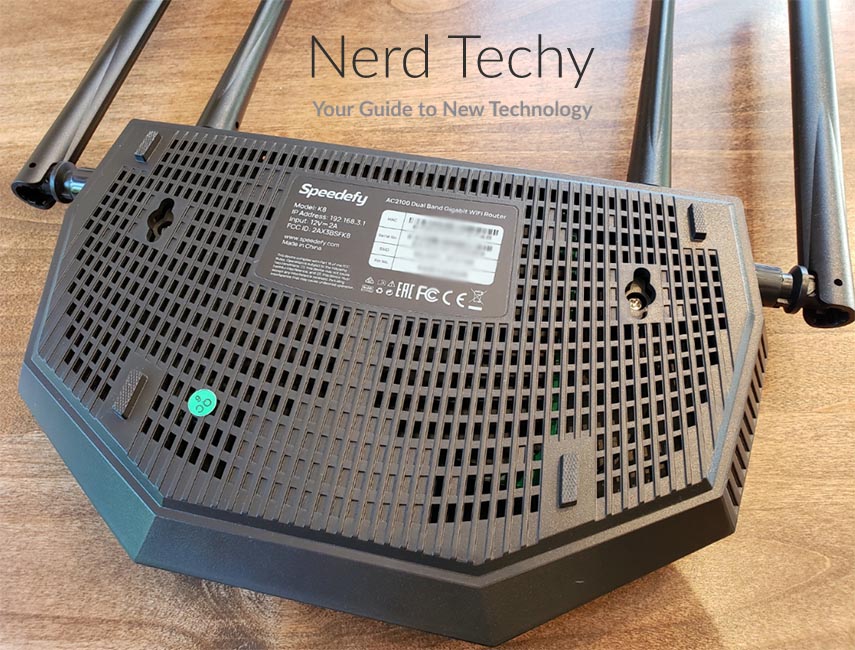 Finally, you also get an upgraded processor with support for more devices. The beamforming technology is more advanced, and can connect to 35 devices simultaneously. If you use a lot of connected gadgets, you won’t have to worry about them crowding out your Netflix signal.

One area where these two routers is identical is the app control. They use the same Speedy WiFi App, with all the same features. The K8 comes with parental control to keep your kids safe, along with guest WiFi for privacy. And just like the K4, you can use it as an access point to expand an existing network. 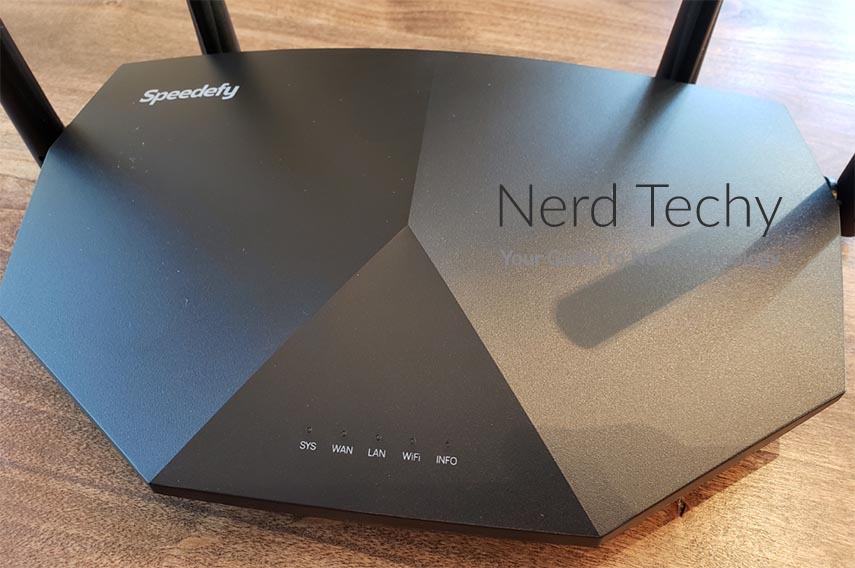 Another way to increase your coverage is to use a mesh WiFi router like the TaoTronics AC300. A mesh system utilizes multiple overlapping routers to create a network over a very wide area. In the AC300’s case, it can cover up to 6,000 square feet, and supports up to 600 devices. That said, installing a mesh system from scratch can be pricey, while the K8 is reasonably affordable.

As you can see, which of these routers is the best depends on your coverage and bandwidth needs. The Speedefy K4 (10% off code: MQK40612) is a great value, especially for smaller homes. Provided you don’t need more than 1,200 square feet of coverage, you’ll have more than enough. The bandwidth isn’t as fast as we’d have liked. You’ll be able to stream in 1080p but not in full 4K. That said, a lot of the app features were neat. We particularly liked the option to use it as an access point. In fact, it’s a great value as an access point alone.

The Speedefy K8 (10% off code: MQS8RKMX) is a bit more robust, and it’s what we’d use for a mid-sized home. Not only that, but it’s capable of 4K streaming. You’ll be able to keep up with the next generation of services. The app controls are identical to the K4, so there’s plenty of value in that regard as well.