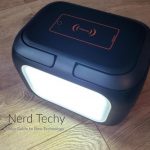 There’s no way to navigate modern life without electronics. When you think about it, virtually every daily activity depends on it to some extent or another. For instance, imagine something as simple as getting out of bed in the morning. Unless you’re old-school, you probably use the alarm on your smartphone. And unless you’re very old-school, you almost certainly don’t use a mechanical clock. The same goes for doing business. Want to get in touch with a coworker? You need a phone or a computer. Want to follow up with a prospective client? Snail mail doesn’t cut it.

This can become problematic when you’re on the road, or when the power is out for a long time. For instance, imagine you’re going camping with your family. You want to “get away from it all,” but your job demands that you have email access at minimum. You’re going to need a way to keep your phone charged! At the extreme, electricity may even be essential for your life or health. Anyone with a CPAP machine knows how essential it is for power to keep flowing all night, every night. If you need backup power for any of these reasons, a portable power station will be a good solution to your needs.

We’re about to review the TrekPow G300 Portable Power Station. Note that this is not the same as a power bank, which is a small device for charging your smartphone. This is a full-sized charging station that will power everything from USB devices to 110v AC power. But just because it’s versatile doesn’t mean it’s worth owning. To find out how well it performs, we needed to take a closer look. We’ll talk about how the G300 is built, and how rugged it is. We’ll look at the charging performance and the battery capacity. Finally, we’ll talk about what you can charge, and how the G300 keeps you safe. 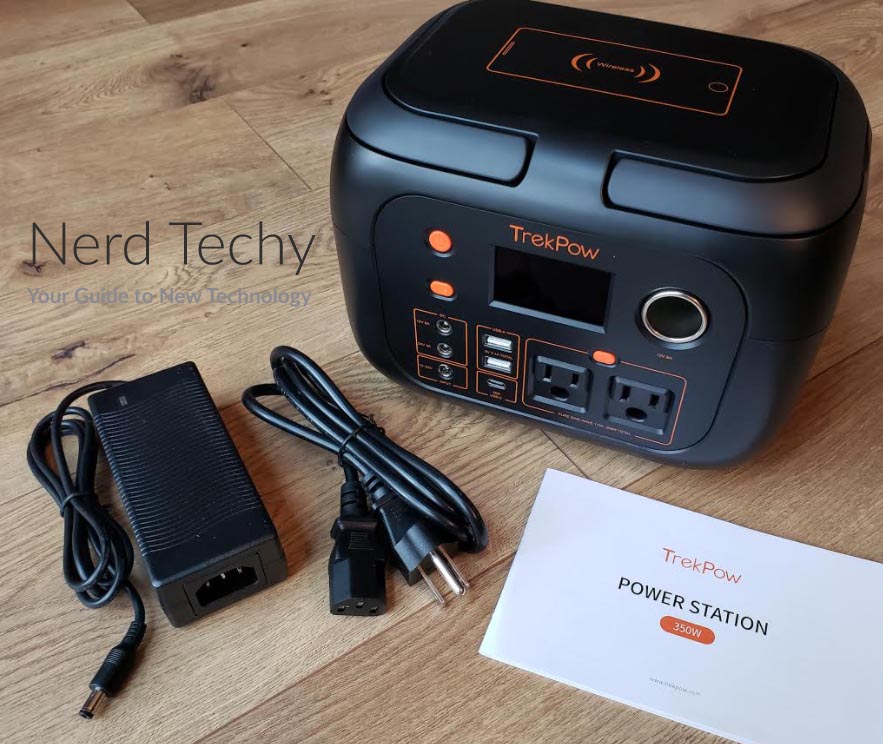 If you’ve already looked at a handful of power banks, you’ll notice that the TrekPow G300 is fairly compact. In fact, it measures only 8.7 inches wide, 6.7 inches tall, and 6.3 inches deep. And with a total weight of only 6.6 pounds, it’s easy to tote around. For all of that, this power bank is not shy about supplying power. The front panel is littered with ports of all kinds. To the left, there are a pair of barrel-style DC output ports, along with a Barrel-style input. There are two USB Type-A ports, and a USB type-C port for faster charging. For larger devices, you’ll find a 12-volt car outlet, as well as a pair of 110-volt AC outlets. The top of the housing acts as a wireless charger, so you can charge a total of nine devices simultaneously. 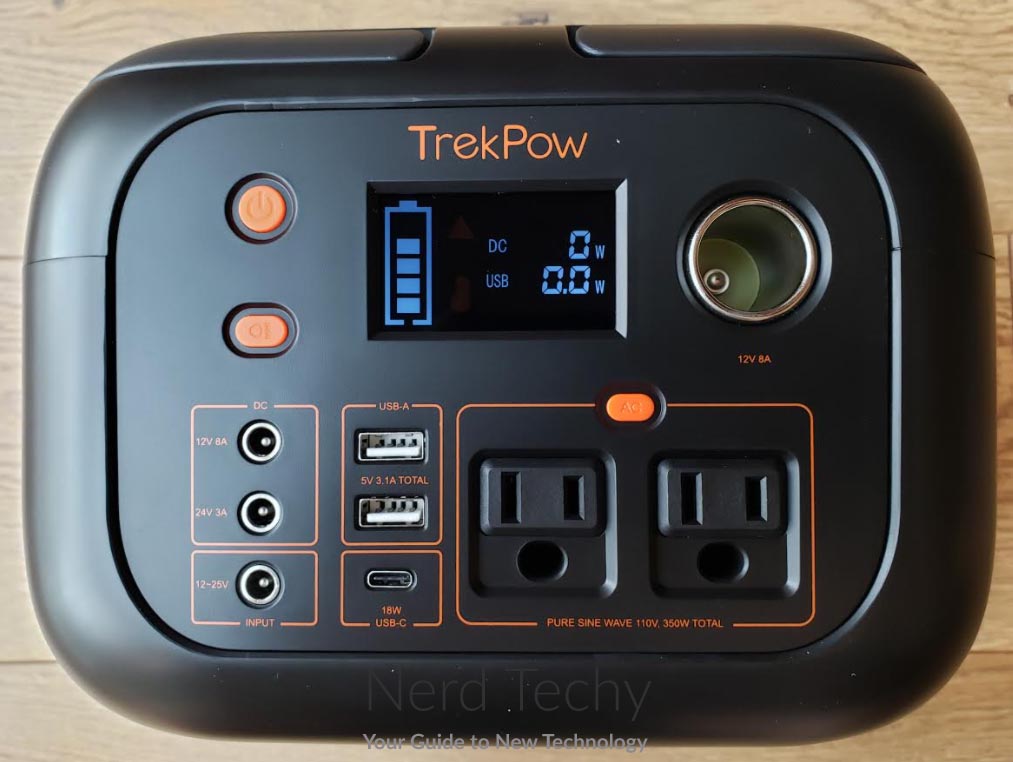 The housing itself is mostly black, with rounded corners for safety and better drop resistance. To either side of the wireless charger, on top of the unit, you’ll see a pair of carrying handles. These fold down discreetly when not in use, but can be easily flipped up when they’re needed. The sides of the housing are orange, and consist mostly of a pair of large vents. These allow plenty of air flow, which keeps the G300 very cool, even when it’s drawing a lot of power. The fans run quietly, although they can be audible under very high wattage conditions.

The front of the housing, above the power ports, sports a bright LCD display. This display shows the current battery status, as well as the total wattage. You can also see a breakdown of which sources are drawing the most power. If you’re nearing the maximum and have to unplug something, the display can be a valuable guide. To the left of the display are a pair of buttons. The top is a simple on/off control for the entire power station, while the bottom controls the LED light. 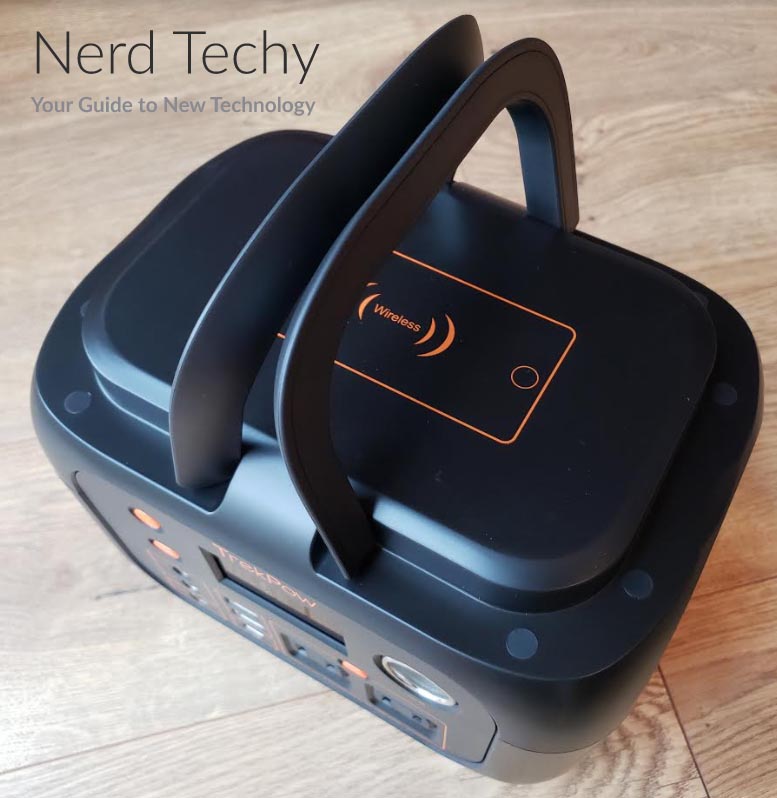 The light occupies most of the back of the G300 housing, and it’s exceptionally bright. TrekPow doesn’t provide a lumen rating, but it can easily cast a beam 300 yards or more. There are three different light modes: steady, strobe, and SOS. Steady is a constant beam, while SOS can be used for emergency signaling. Strobe is useful for non-emergency signaling, or for throwing a wild party in the deep woods.

About the only thing the G300 doesn’t offer is a rugged build. It’s no shrinking violet, but it’s not exactly what we’d call “tactical grade.” If you want a tougher power station, consider the SnugMax Vickers 200. It’s affordable and it’s built like a brick, although it doesn’t offer nearly the power of the G300. 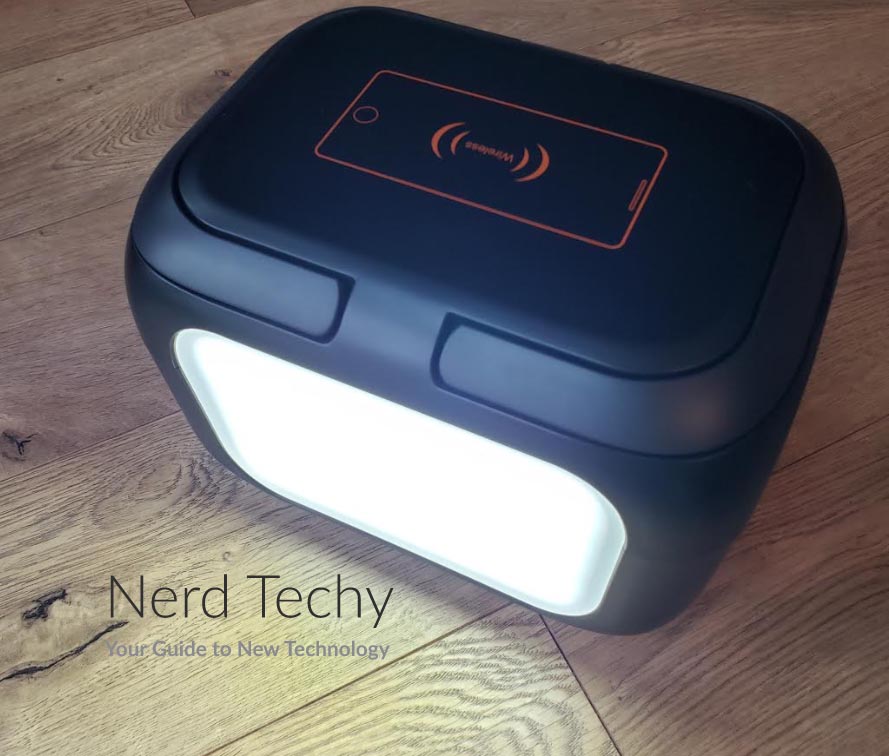 The TrekPow G300’s internal battery has a total capacity of 80,000mAh. This is a lot of power, enough to charge the MacBook Pro 16” ten times over. It’s enough to charge the iPhone X 20 times over, with extra capacity left over. Basically, if you’re charging everyday devices, you’ll have enough power for days or even weeks. Things can get a bit dicier if your devices require constant use, like a CPAP machine running overnight. But even so, you can get through a few nights without power. For most people, that’s more than you’ll ever have to seriously worry about.

The maximum total power output is 350 watts. Note that this is not the same as the maximum power on any single outlet. For example, the 110-volt outlets could easily draw 1,500 watts all on their own. But that would far exceed the G300’s power rating. This is for low-powered devices like phones, laptops, CPAP machines, and even game consoles. You can even run a mini fridge or cooler, provided it’s small and efficient enough. But this is not a complete replacement for your household power outlet. It’s a backup supply for emergencies and for personal electronics.
If you do need more wattage, there are power stations that provide it. The BLUETTI AC200P provides up to a maximum of 2,000 watts, roughly equivalent to a 20-amp household circuit. That said, it’s expensive. This kind of charging performance does not come cheap. 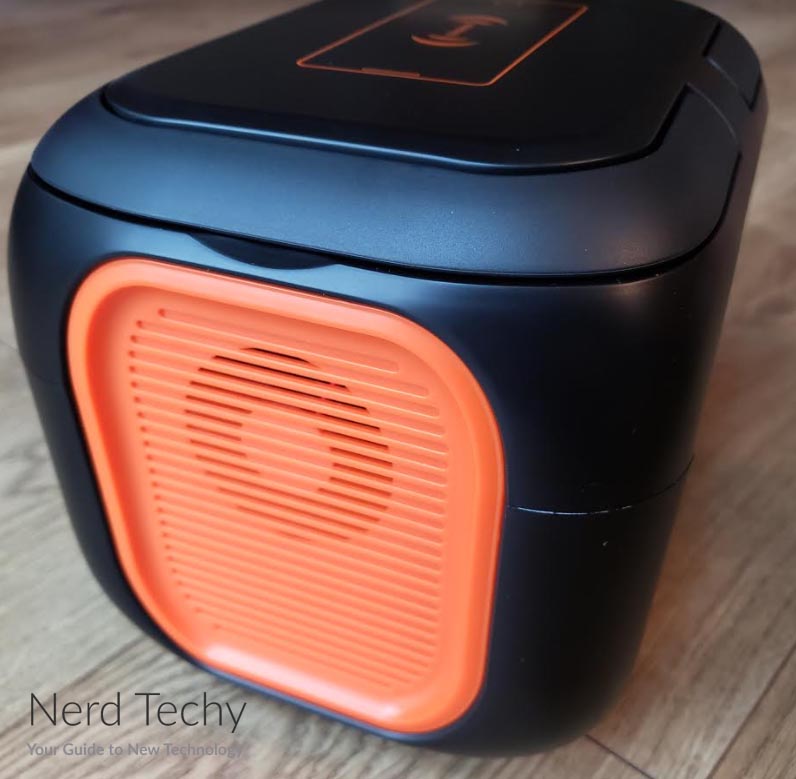 The other outlets draw different wattages entirely. The USB Type-A ports will provide up to 12 watts apiece, or 5 volts at 2.4 amps. However, they share a maximum total of 18.5 watts, or 5 volts at 3.1 amps. The USB Type-C port delivers a standard 18 watts, suitable for most modern smartphones and tablets. The barrel-style DC ports deliver 12 volts, 8 amps and 24 volts, 3 amps respectively.

There are three ways of charging the G300. The first, and easiest is to use the included AC adapter to plug it directly into a wall outlet. However, this isn’t always possible. If the power is out, you’ll need some other method. As an alternative, the power station can be charged from your car’s 12-volt DC outlet. Finally, you can use any solar panel that delivers between 12 and 25 volts and 30 to 20 watts. This is an ideal solution for off-grid use. Regardless of your charging method, the G300 is capable of pass-through charging. You can plug it into your wall, and plug your laptop right into the power station to charge. 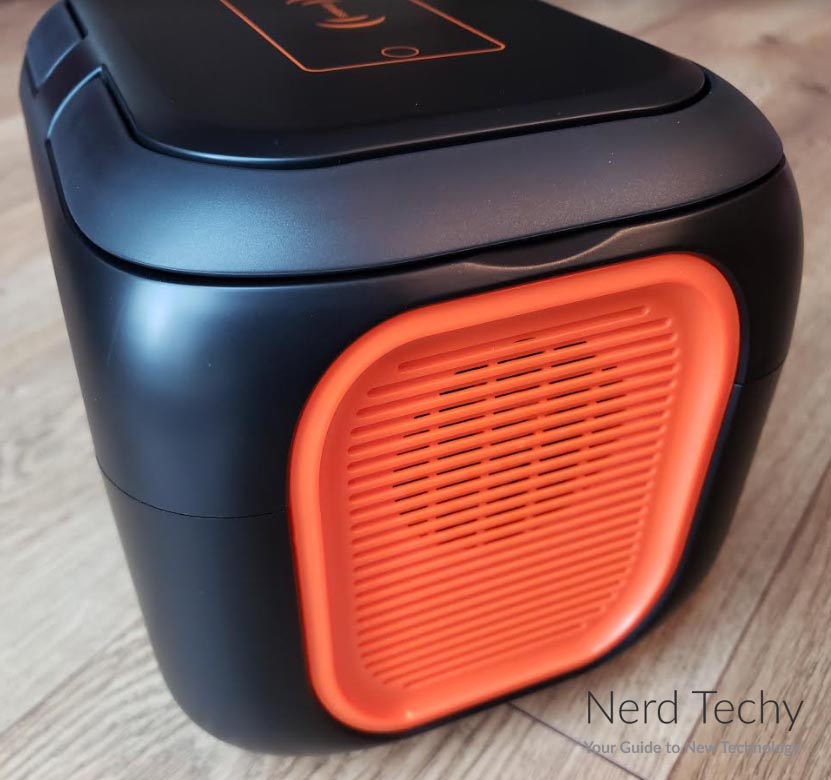 As you can imagine, the TrekPow G300 is capable of charging just about anything you can think of. Considering the number of power outputs, you’d need something really bizarre not to have a match. There are a couple things to note, though. First, the outlets are North American, so you’ll need an adapter for non-North American devices. Similarly, the AC power is a North American standard 110 volts. There is no option for 220/240-volt power. 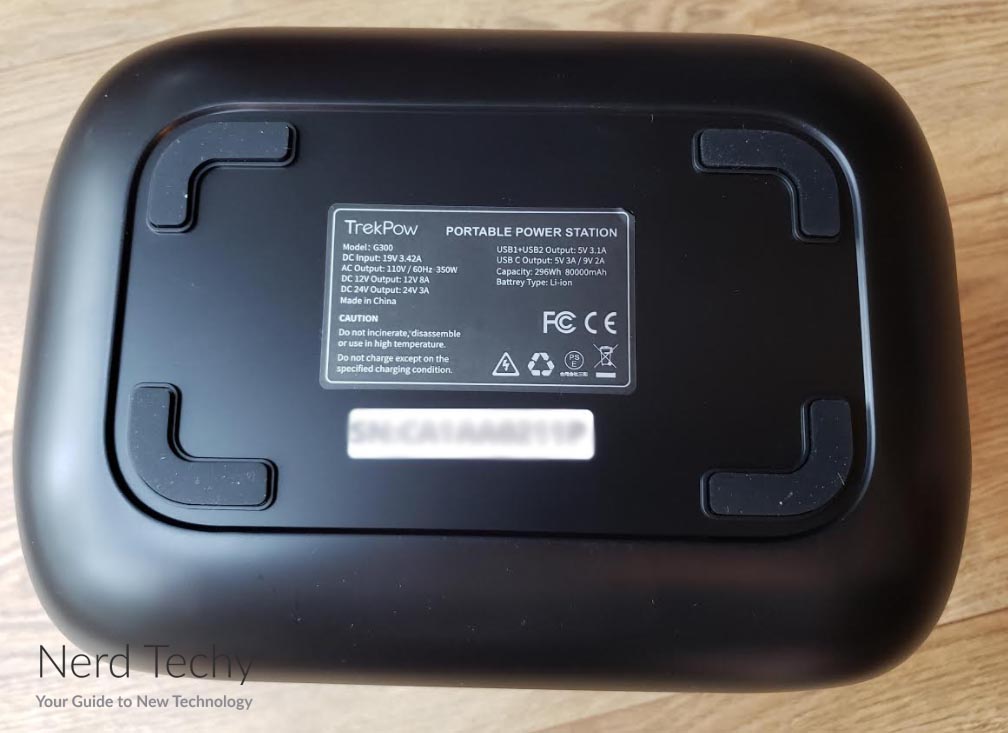 The G300 has several safety features that protect both you and whatever you’re charging. First off, there’s a built-in circuit breaker. When the total wattage exceeds 350 watts, power will automatically be cut off so as to protect the circuitry. There’s also a battery management system (BMS). The BMS allows the G300 to automatically control the voltage on each port. Thermometers enable it to manage the fan speed, and shut down in the event of overheating. Additional sensors detect short circuits, over charging, overloads, and other potential issues. Not only that, but the entire housing is fire-resistant to prevent it from becoming a hazard.

One final benefit of the G300 is that it has pure sine wave AC outlets. Without getting too technical, it uses advanced circuitry to deliver AC power with a smooth waveform. This allows it to operate sensitive electronics like CPAP machines and microwaves. Cheaper, modified sine wave power stations can potentially damage that type of equipment. 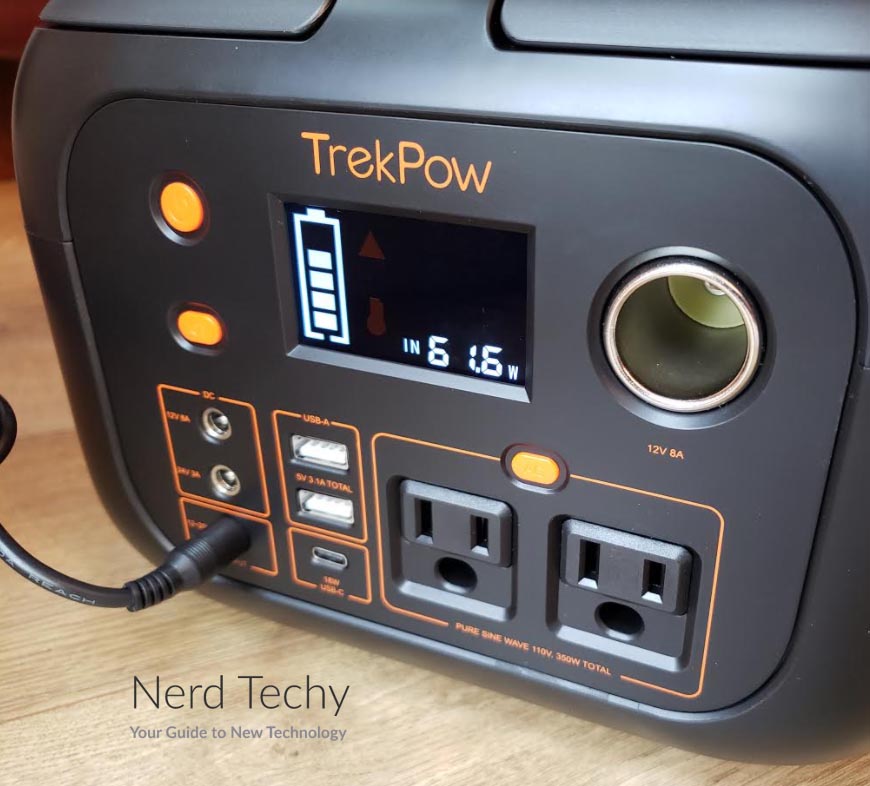 As you can see, the TrekPow G300 Portable Power Station is one of the more impressive charging solutions available. To begin with, it offers plenty of capacity, at 80,000mAh. That’s not as much as the most powerful charging stations, but it’s pretty good. But what impressed us more was the fact that TrekPow fit that much power into such a compact package. The overall size is small enough to tote around in a backpack if you really wanted to. This makes a huge difference if you’re camping. Even if you’ve only got to walk half a mile to your campsite, that’s a long way with a heavier power station.

The overall wattage is around average, but it doesn’t have to be that impressive. Truthfully, 350 watts is enough to perform most everyday tasks. You won’t be able to run a full-sized fridge or cook on your electrical stove. But that’s what gas generators are for. The G300 does everything you’d expect of a power station, in a small package. Not only that, but it’s safe to use, and it even supports wireless charging. And with the ability to charge nine devices simultaneously, there’s plenty of juice for the whole family.